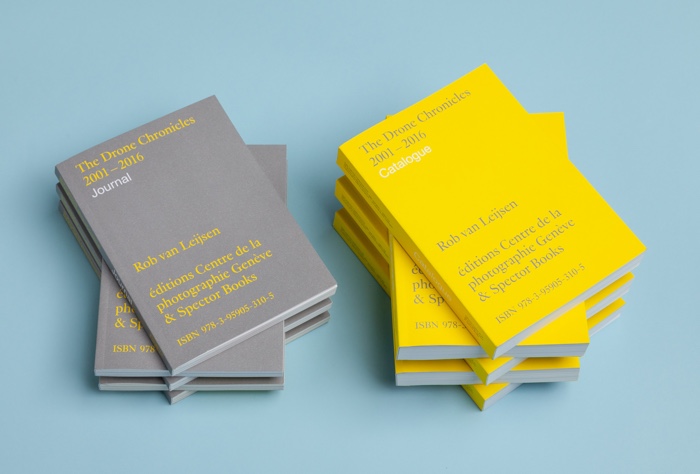 Graphic designer Rob van Leijsen writes: Why are drones—or unmanned aerial vehicles (UAV)—so present in our daily news feed and local retail stores, but do we—despite sky-high sales numbers—hardly see them fly in our public airspace? This paradox of invisible presence lies at the basis of The Drone Chronicles, a diptych that maps the evolution and integration of drones in our society from 2001 onwards. As a drone surveilling a battlefield or crowd, the book offers a contemporary view on drones without emphasising a particular category or usage.

It discusses how this relatively new piece of technology has shifted from a commonly known aerial bombing machine to a multi-purpose and accessible tool. 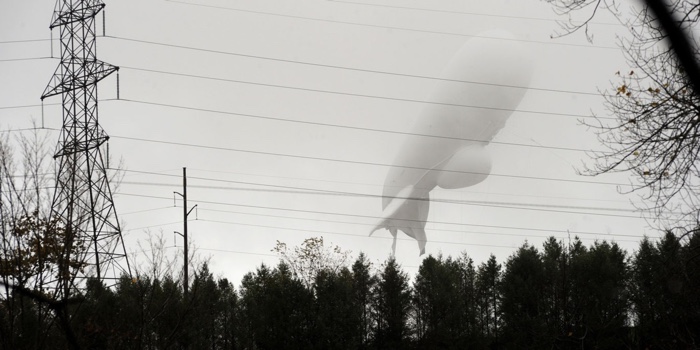 A surveillance blimp flying (and crashing) over an Army base in Maryland, 2015. Photo: Jimmy May/Bloomsburg Press Enterprise/AP (via)

The Drone Chronicles 2001-2016 is a set of two books that record 15 years of drones in our lives. First, there’s a Catalogue of drones with the models appearing in chronological order with a small photo and a list of data: their release date, price, speed, flight time, dimension, function(s), colours available, weight, etc. As you turn the pages, you see how the different uses of the technology evolve along parallel tracks: the commercial, the consumer and the military; the deadly, the useful and the purely entertaining.

The accompanying Journal has a very simple format: it’s a selection of the most striking news articles involving drones in both warfare and every day life. Again in chronological order. Simple but incredibly efficient when it comes to prompting a reflection about the kind of ethical and political questions that drone usage raises.

By juxtaposing informative, technological and cultural stories, the Journal paints an ever changing portrait of a society trying to get to grips with drones. From the very mundane (spraying pesticides over crops or delivering parcels) to the techno-solutionism, the humanitarian and the artistic. 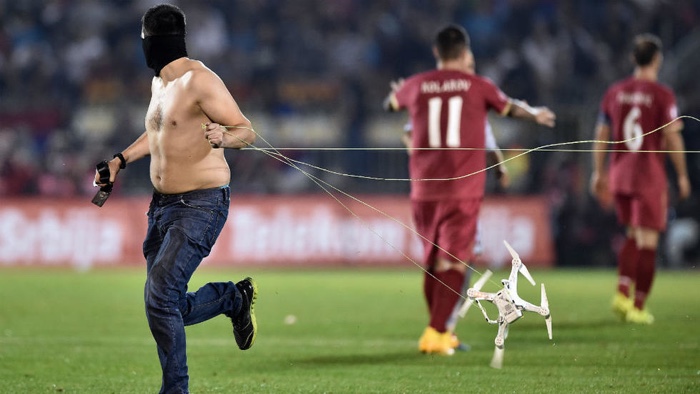 One of the tensions that emerge in the book is the ongoing battle between crime drones and crime-busting drones. One moment, the Argentinian police flies over a taxpayer’s property and discovers that the ultra rich scoundrel had failed to declare his swimming pool to the state. Next, prisoners and dealers are gaily smuggling drugs above walls and borders. One moment you read that pepper-spray drone are offered to South African mines for strike control. Next, pro-choice campaigners use drones to deliver abortion pills to Northern Ireland in order to raise awareness around the country’s restrictive abortion laws. There’s never a dull moment with these drones.

Unsurprisingly, the more drones become part of mainstream culture, the stranger the stories get. Along the pages, you’ll meet an artist who paid homage to his deceased cat by turning it into a flying machine (he has since worked on a cow and other animals whose corpses deserved better than to become a ghoulish attraction), Enrique Iglesias whose duet with a drone ended painfully and Barack Obama not only approving UAVs strikes that ended up killing civilians but also making poor jokes about Predator drones.

There’s a few idiotic headlines about equally idiotic projects such as the one described as “Re-planting a forest, one drone at a time.” And more promising projects like a biodegradable drone grown from mushrooms and covered in wasp spit. It’s fascinating to see how a technology born in a purely military context can find its place in every single aspect of our life. 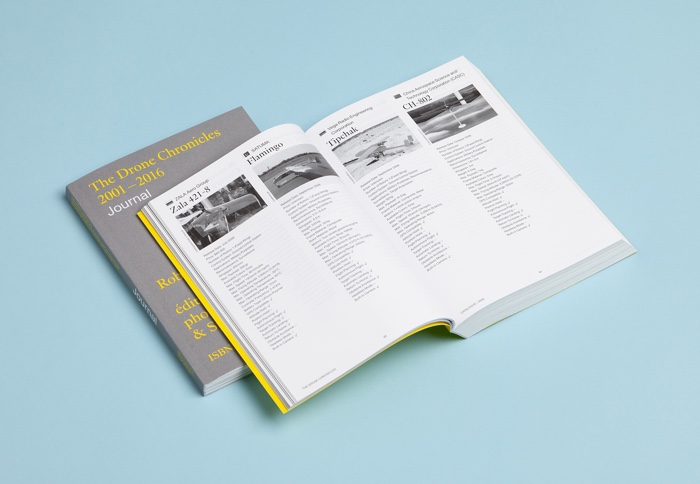 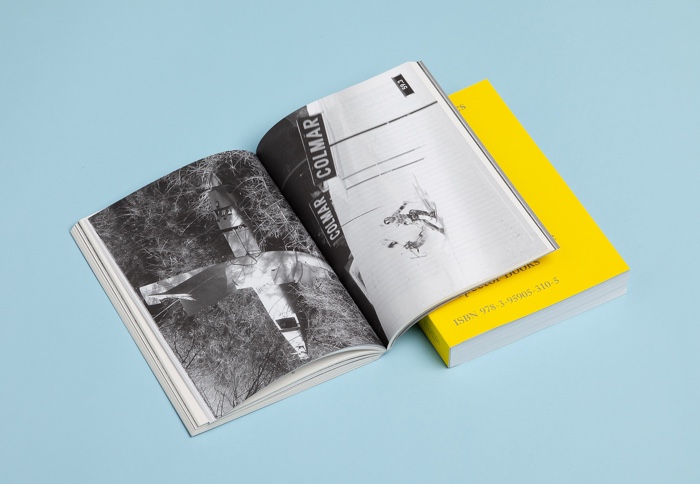 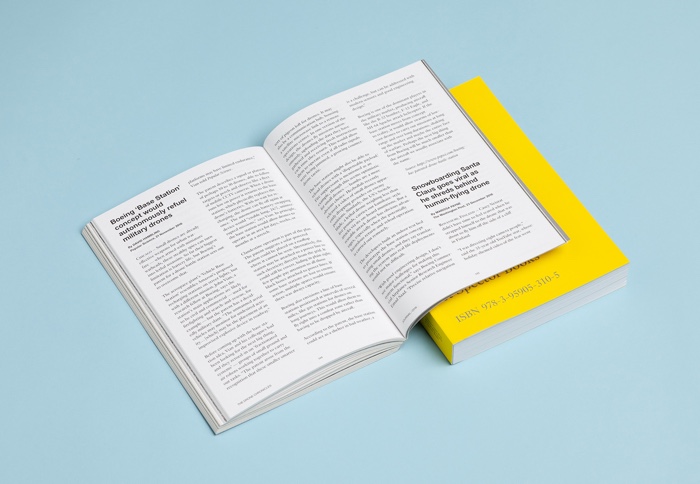 Unlike what its title suggests, The Drone Chronicles 2001-2016 was published this year. The drone study starts in 2001, a year when military models were getting increasingly sophisticated and increasingly discussed as part of the media coverage of the U.S. invasion of Afghanistan. Commercial drones started appearing shortly after. Since the book closes on 2016, I got in touch with Rob van Leijsen and asked him to run us through the past 3 years of drone culture and research.

“Consumer drones (the toys you find in your local electronic hardware store) are still highly popular, but we might have seen the peak of the hype,” the graphic designer told me. “I see different sales numbers in the media, but sales mainly rise in the US ever since 2016, while in Europe consumer sales seem to flatten a bit. With the exception of racing drones, they are ever surging and organised competitions arise everywhere, with sponsor contracts and price money involved. Drone racing is a huge potential entertainment business I guess. A positive aspect is that these events are regulated and supervised.

I came across a surprising article that states that Parrot, the biggest consumer drone producer from France, is pulling away from the toy drone market. This is a sign that drone producers shift their focus and energy even more towards the commercial drone market.

This has possibly to do with more strict regulation for civilian drone use, and growing economic interest in commercial sectors like agriculture, mining, mapping, etc. I think we (both manufacturers and users) start to recognise the contexts in which drones are useful to our society as a whole, and not only to the individual recreational pilot.

We simply can not fly everywhere without considering our environment and bystanders. I also sensed a certain civilian resistance to drone use in public space while speaking with visitors, which I think is very understandable and even welcome. People start to reflect on the implications of drone presence in their direct environment, and express their annoyance in private and public conversations.

As for military use of drones, there is a big run on implementing AI in drones, like for example Project Maven from the US Military, and for competitive anti-drone systems on the other hand. Obviously, the recent drone attack on a Saudi Arabian oil facility nourished the discussion of national territory protection against drone strikes once again.

Here’s an interesting article about the trends of drone use in 2019.”