Last week, i was in Berlin for the talks and screenings organized by the Disruption Network Lab, a platform of events and research focused on art, hacktivism and disruption. DNL opened its program with Eyes from a Distance. On Drone-Systems and their Strategies, a conference that explored the politics and the regime of power beyond drone-systems. A couple of the talks have already been uploaded online. They will all be there eventually and in the meantime i’m going to dutifully post my notes from the conference.

Starting with the brilliant panel of the first evening. The Grey Zone. On the (il)legitimacy of targeted killing by drones, moderated by journalist Laura Lucchini, explored drone strikes under the perspectives of an investigative journalist, a criminal law researcher, an activist and a blogger/journalist who lives in Gaza under the constant surveillance of the Israeli drones (more about her in a later post but go ahead if you’re curious…) 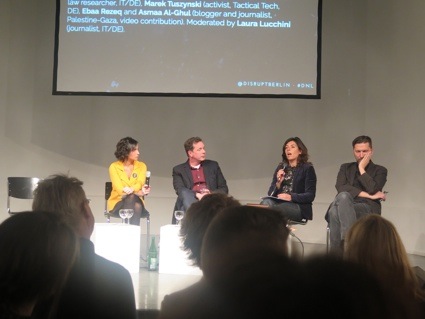 The grey zone is of course the dangerous, blurry area where drone attacks operate. The practice of targeted killing by drones raises many questions: “How many civilians have been killed as collateral damage during these strikes?” “And even if we’re talking about militants, how can the killings be justified when there has been judicial supervision? “If these drones can reach their targets anywhere, then how is the battlefield defined?” “87 countries (and counting) are now equipped with military drones, which they use mostly for surveillance. Only 3 countries use drones for targeted killings: the U.S., Israel and the UK. Where will this stop?” “And if these targeted killings are illegal, why does Europe keep silent?” 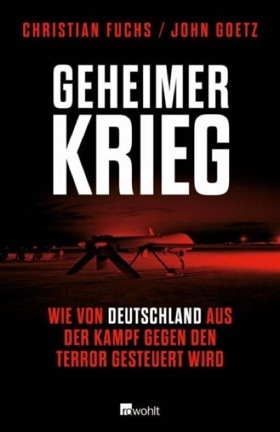 The first panelist was John Goetz, an American investigative journalist and author based in Berlin. He wrote, together with Christian Fuchs, the book Geheimer Krieg (Secret War) which reveals how the war on terror is secretly conducted from covert U.S. bases in Germany.

Goetz’s presentation attempted to reconstruct one day of a drone attack in Somalia and as the narrative unfolded, we got to hear about Germany’s involvement into these military operations, the way the U.S. gather intelligence in foreign territories and how innocents end up being caught in the line, if not directly targeted due to inaccurate information.

As he explained at the conference (and as an article in The Intercept further confirmed), drone strikes wouldn’t be possible without the support of Germany. The Germans might not launch the attacks themselves but they provide intelligence and they coordinate the strikes that target suspected terrorists in Africa and the Middle East, but that also kill civilians.

The U.S. drone war in Africa is controlled from U.S. bases in Germany, namely Ramstein and Stuttgart. Germany is also responsible for gathering human intelligence. There are many Somali immigrants and asylum seekers in Germany and as they arrive, they are asked about streets, shops, location of members of Al-Shabaab, etc. Any information that could be used by the “War on Terror” is immediately relayed to U.S. intelligence officers. 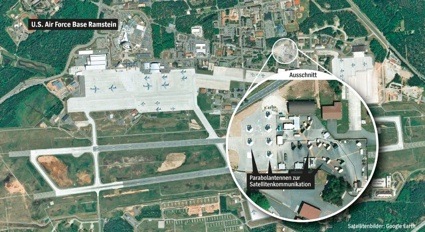 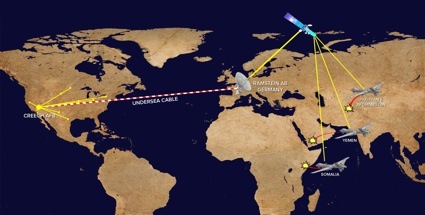 Transatlantic cables connect U.S. drone pilots to their aircraft half a world away. (Josh Begley, via The Intercept)

The second speaker was Chantal Meloni, a criminal lawyer and the author of Is there a Court for Gaza? A Test Bench for International Justice, a book about the crimes perpetrated during the Operation Cast Lead against the Gaza Strip.

Meloni put the issue of targeted killing by drones into a legal framework.

Since 2004, up to 5,500 people have been killed by drone strikes in Somalia, Yemen and Pakistan. These are countries the U.S. is not officially at war with.

Killing has supplanted capture as the centerpiece of the U.S. counter terrorism strategy. Opposition to drone killing is growing but it is not as effective as the opposition to torture was. A reason for that might be that the legal framework for drone strikes is more complex.

Drone strikes have escalated under the Obama administration and they are characterized by a lack of transparency: states don’t disclose who has been killed, why and who are the collateral casualties. Obama doesn’t disclose the identity of the people on the kill list. There is no public presentation of evidence, nor any judicial oversight. The level of opacity is actually ridiculous. The little information we have is provided by media reports, leaks or testimonies.

An analysis by the human rights organization Reprieve found that US operators targeting 41 men have killed an estimated 1,147 people. So who are the 1,106 individuals? We don’t know, most of them remain unnamed. What is sure is that the collateral damage shows that drones are not as ‘surgically precise’ as the U.S. claims.

Rosa Brooks, a Georgetown professor and former Pentagon official under President Obama, sums up the situation: “Right now we have the executive branch making a claim that it has the right to kill anyone, anywhere on Earth, at any time, for secret reasons based on secret evidence, in a secret process undertaken by unidentified officials.”

We associate the start of the drone attacks with the U.S. and their post-9/11 counter-terrorist strategy but the military use of drones started long before that, in Israel, a country that has the longest track record for targeted killing (aka “targeted prevention”) of Palestinians. Targeted killings can be defined as the state-sponsored practice of eliminating enemies outside the territory.

Nowadays, most of the drones sold around the world are used for surveillance purposes but it has been forecast that in 10 years every country will have armed drones. 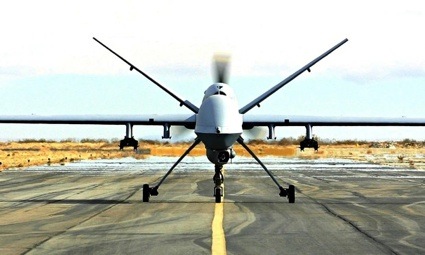 60% of the world export of drones come from Israel. Israeli manufacturer Elbit is producing the best selling model: the Hermes drone which was used in the latest attacks on Gaza. 37% of the killings that occurred during the attacks on Gaza can be attributed to drones.

One can see the appeal of drones for governments and policy makers: they are relatively cheap, they are claimed to be ‘surgically precise’, they make it easy to kill without any risk and they allow the army to reach their target in areas that would otherwise be difficult to reach. But do their use comply with the martial law?

States have thus expanded the concept of war on the battlefield as to include situations that should in fact be regulated by law enforcement agencies. The ‘war on terror’ is a total war for which no end nor boundaries is conceived. The number of enemies is infinite too. Governments justify the use of lethal forces by claiming that this is ‘anticipatory self-defense’ but, under the laws applicable under war time, the self-defense argument allows killing only when all other solutions, such as capture, have been exhausted. Most targeted killings outside the battlefield constitute thus premeditated deprivations of life, violations of the right to life.

When killings cannot be justified they constitute war crimes and other states have the duty to investigate and not leave dormant this huge accountability vacuum.

The final speaker was Marek Tuszynski, the co-founder of Tactical Tech, an organization ‘dedicated to the use of information in activism.’

Tuszynski’s talk focused on a series of short documentaries called Exposing the Invisible. The films look at the investigative work of journalists, artists, reporters, activists and technologists who explore publicly accessible data in order counter mainstream reports and go further than traditional journalistic investigations. One of the documentaries, Unseen War examines the physical, moral and political invisibility of US drone strikes in Pakistan.

He argued that counter powers should build their own intelligence practice.

The operations in Pakistan might be located far away but they concern us because
– the use of drones legitimizes a state of permanent surveillance, it makes it ok to gather all kinds of information about an individual,
– they legitimize multi-layered total surveillance systems in which the data collected by drones is accompanied by information provided by human intelligence on the ground,
– they legitimize two aspects of surveillance: one is the schematization of behaviour. You’re not targeted because of who you are but because of how you behave. Models of behaviour are built and based on these models a system will determinate who is bad and who is good. Besides, they legitimize systems that detect misbehaviour. If someone is doing something different from the normal patterns, this person has to be put under surveillance.

But there’s no reason to be passive, we need to protect ourselves because surveillance doesn’t require machines flying above our heads, we are already providing a vast quantity of valuable indormation when we use social media and that data can be used to analyse our digital behaviour. To protect yourself from intrusion to privacy, check out Tactical Tech’s Security in-a-Box website.

Image on the homepage via BBC.