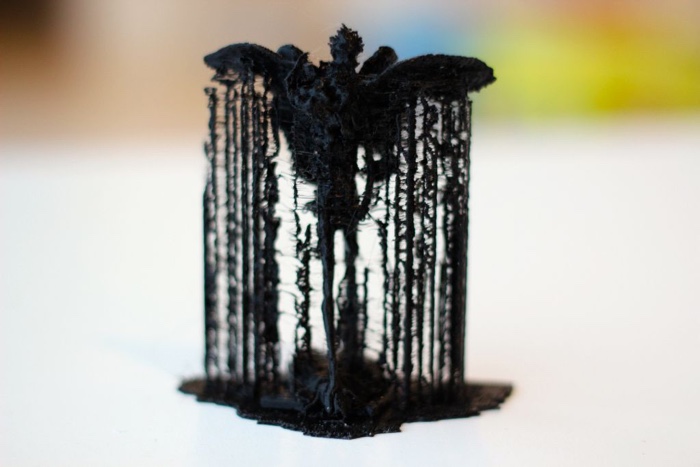 Part of Nuclear Culture, a curatorial project that brings together visual artists and researchers in humanities to reflect on issues related to the nuclear, looks at how we can communicate the presence of a radioactive waste disposal site across hundreds or even thousands of generations.

Some of the artists involved in this complex inquiry have imagined various strategies to communicate the presence of radioactive material around us over a period of time that extend beyond human temporality. Thomson & Craighead, for example, created Temporary Index, a totem that acts as a counter for representing the decay rate of nuclear waste products and as a signpost, mapping the distance between its location and the nearest radioactive waste facility. Meanwhile, Erich Berger and Mari Keto‘s INHERITANCE jewellery set brings the issue of the slow decay of radioactive material into a domestic setting. 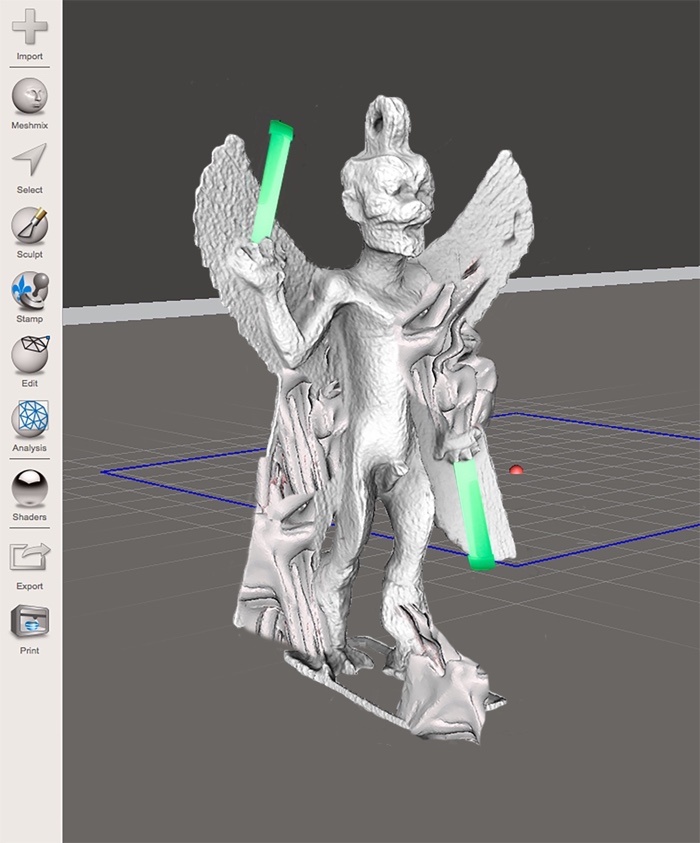 His Pazugoo project consists of a constellation of collectively modified Pazuzu, the Assyro-Babylonian demon of epidemic and dust. The figurines, which brandish an uranium glow-stick, are created during collaborative workshops using digital 3D object files of scanned museum figures which are edited and 3D printed. The work envisions that the Nylon 12 mini statues will then be encased in clay tablets and flushed into local water supplies, perhaps later discovered as artefacts, or left to slowly degrade and form new molecular configurations through ingestion and drift. Once they have been thrown away, the figurines will live the enduring life of plastic. They will end up in the waste, will crumble into microplastics, will join trillions of other plastic particles into the ocean where they might find their way into the bodies of marine organisms. Which we might eventually consume. If ever humans still inhabit the earth when that might happen.

As Weir wrote in the essay Deep Decay – Into Diachronic Polychromatic Material Fictions, the Pazugoo figures, once they have been scattered into the landscape, become an “anti-marker”:

The anti-marker focuses on leakage, non-containment and the speculative potential of future transformations of humans in dynamic relation and alliance with other entities across scales. This is practised not as metaphor or sign, but through its own performative materiality, drifting from dump to sea, navigating from local sites towards a universal ungrounding current of deep time.

By anchoring the (anti)marker in mythology, Weir points to future radioactive menaces that are as intangible, as powerful and as eluding as the dust and viruses brought about by Pazuzu.

As markers of deep geological repositories, the figurines also seem to echo the superstitions and irrational beliefs that accompany our understanding of the underground world.

Pazugoo is currently part of the exhibition Nuclear Culture presents: Perpetual Uncertainty at Z33 in Hasselt, Belgium. I caught up with the artist and asked him to tell us more about Pazugoo: 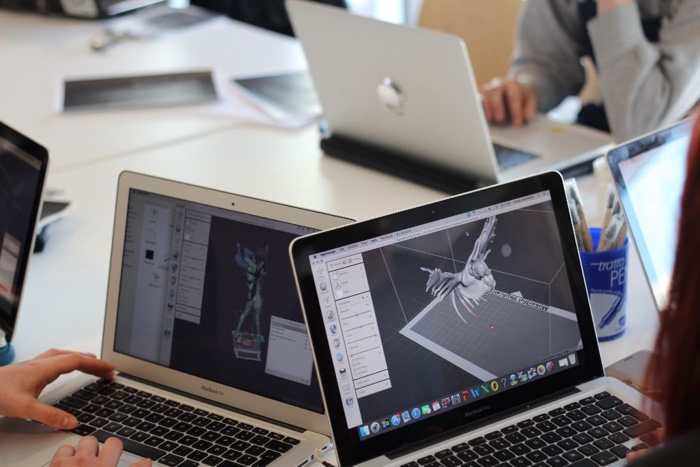 Hi Andy! Why do you think that tiny figurines of Assyrian-Babylonian demons have the power to speak to future generations? Rather than a more abstract sign or the usual symbols of dangers we use nowadays?

I’m very curious about the way you propose to communicate the presence of radioactive storage sites. Instead of designing a monumental marker, you would lose the figurines in the landscape. How would people in the future find them and make the connection with danger?

My initial interest in the deep geological repository sites was the immense timescales at stake, the way for example that imagination of the 4.46 billion year half life of Uranium-238 became part of a design process.

With the Pazugoo project, then, I was interested to ask what it might mean to consider artwork over these timescales. The buried objects would have a future life of decay, mutation and entanglements with the surrounding environmental materials, over hundreds, thousands, millions of years, in a way very different to the usual timescale of an exhibition.

Pazugoo is based on mutative iterations of Pazuzu, demon of dust and contagion, and in this case is invoked as a navigator through deep time.

The work, in this sense, parasites on the temporal context of nuclear storage. Rather than proposing a direct form of communication with future generations, it suggests more of a material thought experiment, opening to a future out of my control, and infecting thought now.

On the other hand, the models do also communicate through their relation to an ‘index-Pazugoo’, which I am currently developing for the next stage of the exhibition in Malmo. As part of the museum collection, this will act as a marker for the buried objects. I’m interested in how this uses the museum exhibition as a kind of refractive indexing (the model is there as reference to the distributed Pazugoos), focal point for the work’s loosening into the surrounding environment. 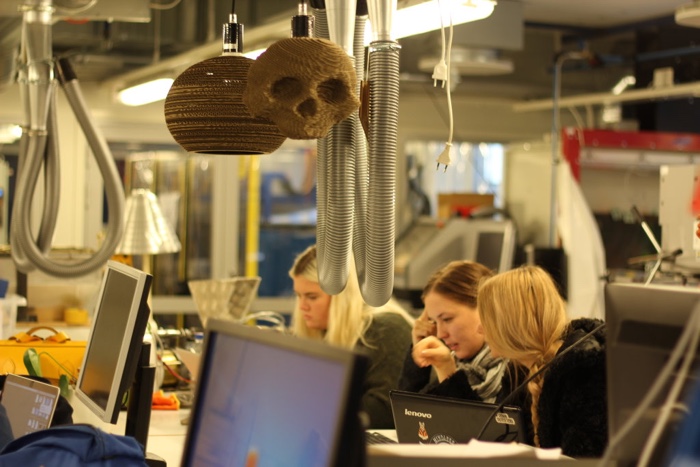 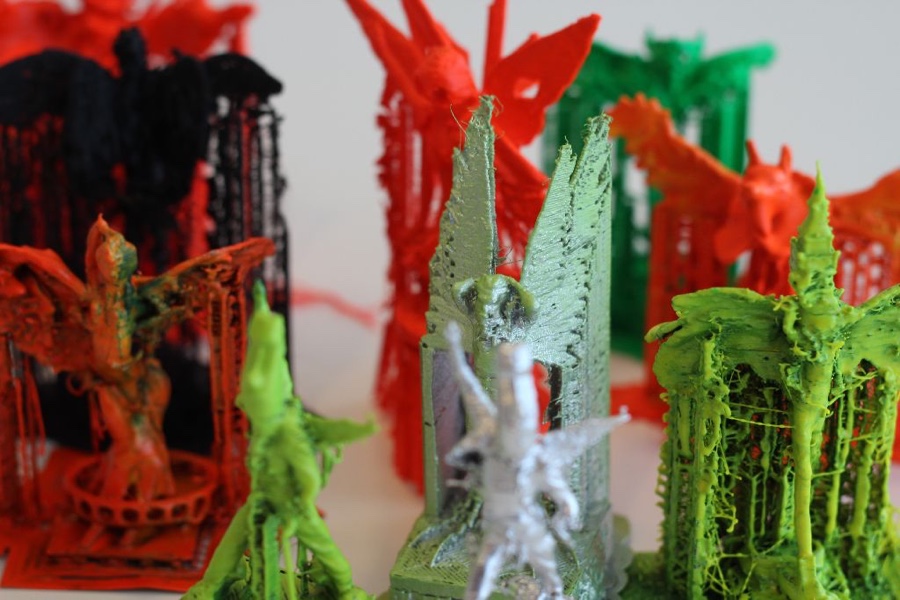 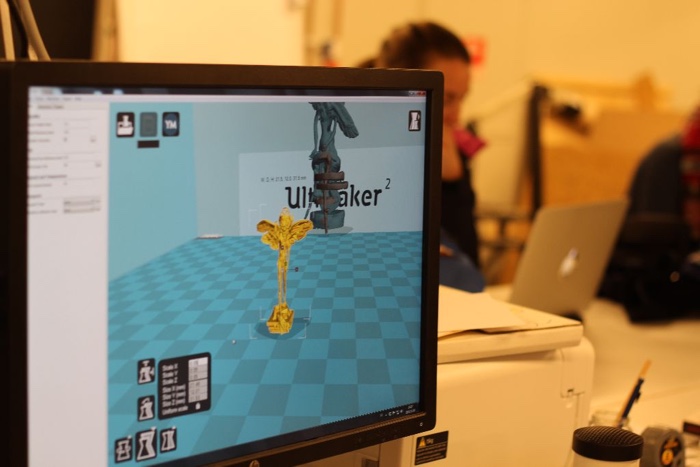 When your work was exhibited at Bildmuseet in Umea, Sweden, you organised workshops in which participants 3D printed glitched Pazu-goo models. Why glitch the figurines? And according to what logic?

Following on from thinking about the models as objects in the earth, I became interested in their qualities less in terms of monumental signification, but more in terms of their material plasticity. I became interested in particular plastics, in other words, as a kind of synthetic-natural hybrid deep time connector between distilled and polymered fossilised remains and contemporary plastiglomerate relics. At the same time, I was thinking about the 3D printer as a technology to distribute and propagate pollution as future relic-making (I consider burying the models a kind of ‘critical pollution’ strategy). The glitch in this case comes simply from retaining the machine-produced plastic effects in excess of the original designs (the oily molten drip made solid, for example) usually removed in the finishing of models. I keep it to draw critical attention to the objects as plastic and as a self-aware reference to its own design process. It emphasises these demons as material plastic objects as well as ritualistic navigational figures. It’s also another way that the aesthetics of the work develops at tangents to my agency, through workshops, through the morphology and through the machine. 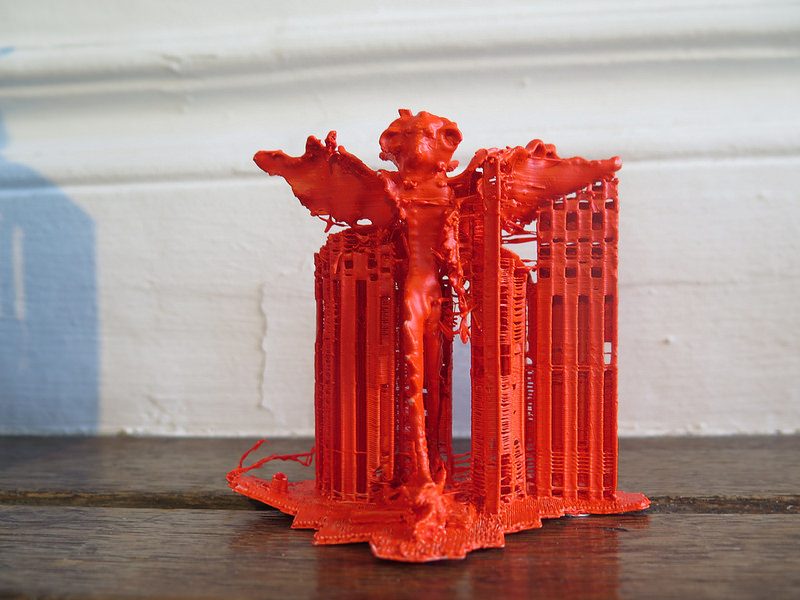 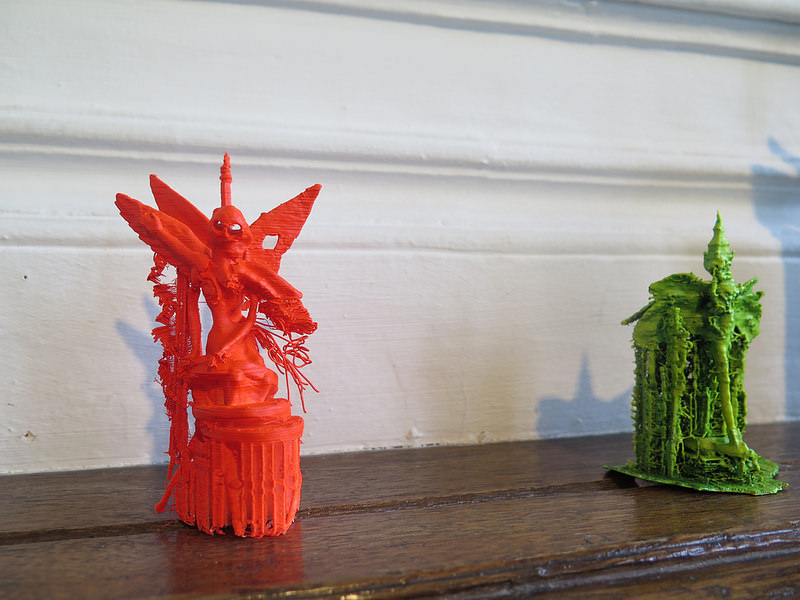 Would the figurines be thrown in the landscape following some specific rituals?

This is an interesting question, as it is a part of the project I haven’t developed yet. Yes, I think they will. I hope there is some scope for collaborative performative action with nuclear agencies here. 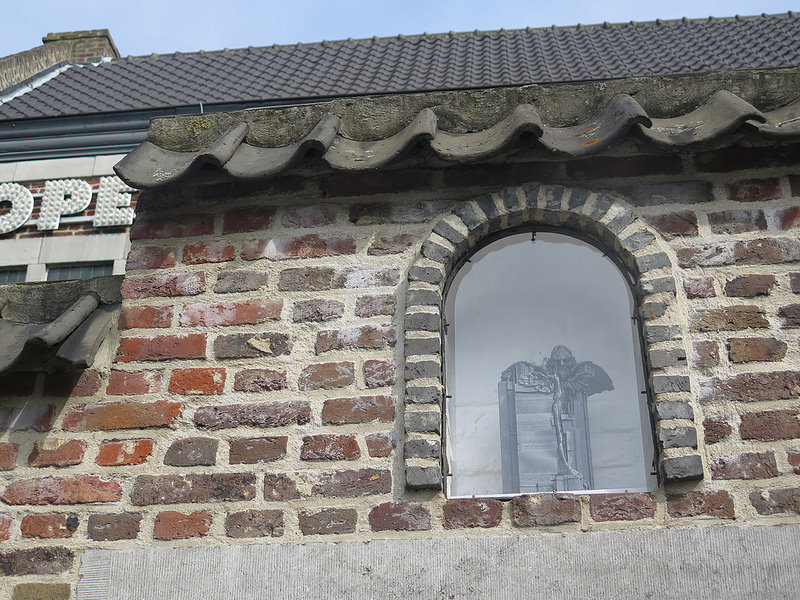 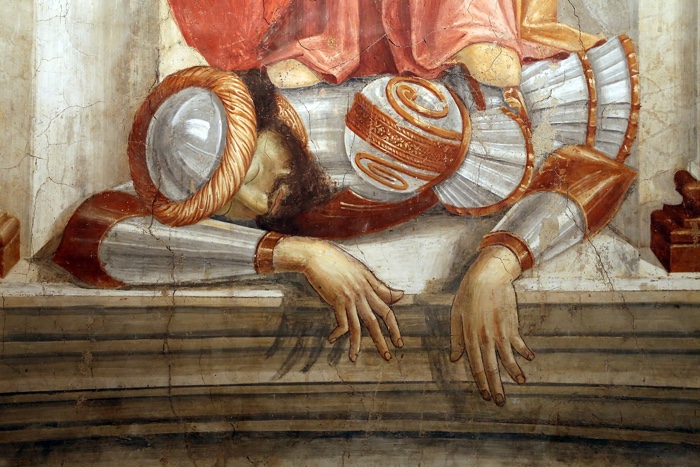 The work is currently on show at Z33 in Hasselt and, once again, you modified the little demon but this time the changes were inspired by Saint Barbara. Could you tell us the story behind this religious figure and why you chose to work with it?

I came across Santa Barbara as the patron Saint of miners when I saw a figure displayed in a glass vitrine on my visit to the H.A.D.E.S research laboratory in Mol, Belgium. I later discovered that a similar figure is on display at the entrance to deep geological repositories around the world (and tunnels more generally), touched for protection by miners. It is evidence of a rich shared contemporary mythical culture around the sites, which I see my Pazugoo project in dialogue with. Engineering, myth and futurology are intimately entwined. I liked the image of a mythic underground connection through ritualistically protected tunnels, in a strange balance with Pazugoo’s airborne flight driven by an excess of wings. Barbara also morphs, becoming, for example Yansan, orisha of wind, in Candomble, crusher of the patriarchal will in Ghirlandaio’s 15th Century frescoes, and also apparently the inspiration for Barbiturates.

Do you see Pazu-goo as an ever-evolving figure and project? Are there more steps and manifestations coming up?

Yes very much so, I mentioned above the development of the project for the next stage of Perpetual Uncertainty in Malmo. For this I plan further prototypes for burial and the index marker. Discussions around the work are an important part of it for me and I’ll be taking part in a roundtable discussion as part of the Z33 exhibition soon. I’ve also been making some new diagrams which I’m publishing as part of a collaborative project on ‘the contemporary’. I will work next on the burial ritual, some new sound work, and other production/ distribution/ reformulation strategies (including algorithmically produced objects). Pazugoo continues to drift. 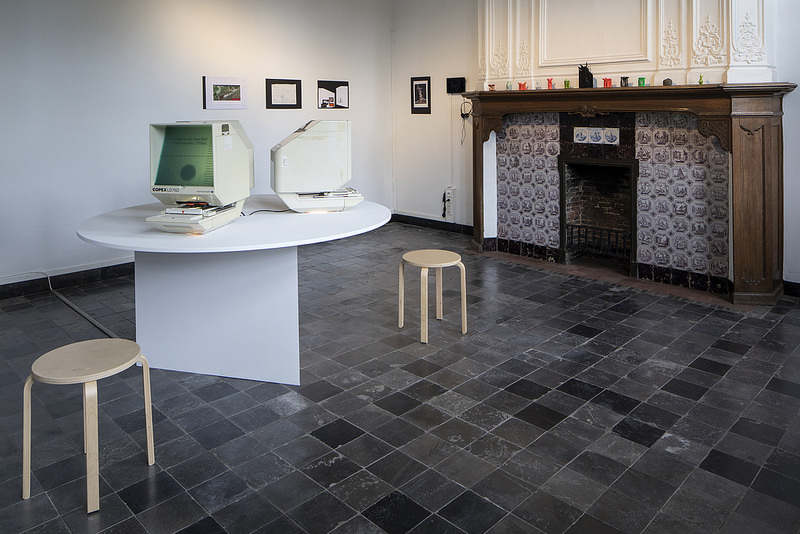 Andy Weir’s figurines are lined up on the mantelpiece, at the back of the photo. Exhibition view at Z33. Photo by Kristof Vrancken

Could you tell us also about the short field recordings you made in 4 different deep geological repositories in Europe and the USA? It’s interesting that you didn’t use a visual language back then. How do you get authorization to make the recordings on these sites? And what is it that the listener can perceive exactly, apart from ambient sound?

Yes, this actually returns in the video in the Z33 exhibition, where the sound is composed from the noise of the lift descending into and ascending from the H.A.D.E.S lab. I’m also returning to sound in some current work, from a different perspective, around sonification as futurology. When I first researched and visited the sites, I was interested in the processes of projection, pre-emption and modelling alongside this mass of radioactive stuff that is there as hidden driving agency of the whole project. I approached this through playing with modes of fictionalisation. Recording, archiving and distributing ambient sound was proposed as a ‘sonic fiction’ as angle of approach to deep time. This drew on histories of hyperstition as bringing about reality through fiction, and reflected on the complex temporality of the sites, extending beyond and looping back to human experience. The idea was not so much that the listener would perceive something as catch something! This led to further play with ideas of contagion, and the emergence of the figure of Pazuzu (demon of dust and contagion) as ritual navigator through deep time, which loops back to your first question.

Nuclear Culture presents: Perpetual Uncertainty is at Z33 in Hasselt until 10 December 2017. Entrance is free.

More photos from the exhibition on Z33 flickr set and on mine.

Perpetual Uncertainty is produced by Bildmuseet, Umeå and curated by Ele Carpenter with the support of Z33 and Arts Catalyst London.