So far, blockchain systems have been mostly used in the world of finance or supply chain but they have so much more potential.

Over the past few years, artists have been working with blockchains to produce artworks that explore value systems and wealth disparity in the art world and beyond, that turn human respiration into crypto-currencies, that enable a forest to accumulates capital, experiment with alternative art ownership mechanisms, reward people for meditating (or pretending to) or critically examine how natural resources can be transformed into value.

But can blockchains technology be mobilised to play a more diffuse, more profound role in the reorganisation of the art world? Can it revive, challenge and rewire the art world at a deeper level? Can the values that blockchain makes possible -such as transparency, sharing of resources and equal access to information- be applied to how the art world thinks and functions?

Curators Ruth Catlow, Penny Rafferty and Ben Vickers believe experiments with DAOs (Decentralised Autonomous Organisations) can benefit the whole artistic community. This month, they’ve launched The DAOWO Sessions: Artworld Prototypes (-WO stands for working with others!), a series of online presentations and exchanges that run every Thursday morning until 4th March 2021. The sessions have 2 objectives: present new blockchain prototypes by DAO teams in Berlin, Hong Kong, Johannesburg and Minsk who received funding to develop experimental art projects but also invite the public to discuss the potential of DAO and explore how blockchain technology can help devise new systems that are developed locally but can also be deployed by different communities in different settings and locations. There is an urgency to investigate the technology now before it becomes solidified.

The first online session in the series explored Black Swan DAO, an experiment for a decentralised approach to current art world models of funding and resources. Laura Lotti and Calum Bowden, the artists and thinkers behind the project, wanted to address head-on the increasing precarity of artistic practices and other forms of cultural labour. Right now, the resources, fundings and mechanisms of the art world tend to be concentrated in the hands of established institutions. What if they could be channelled to cultural practitioners? 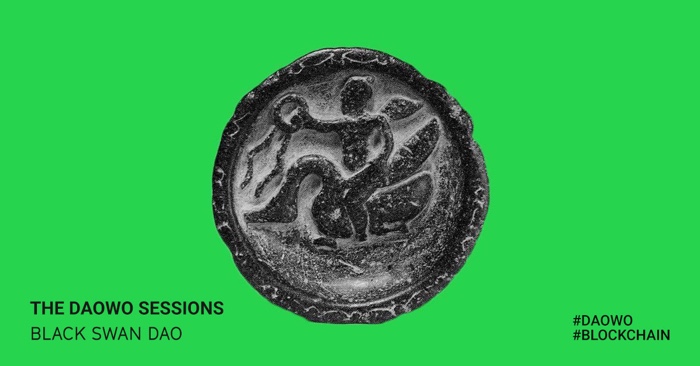 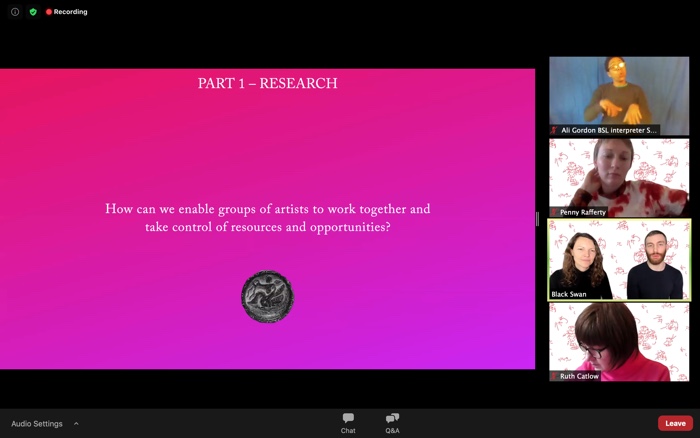 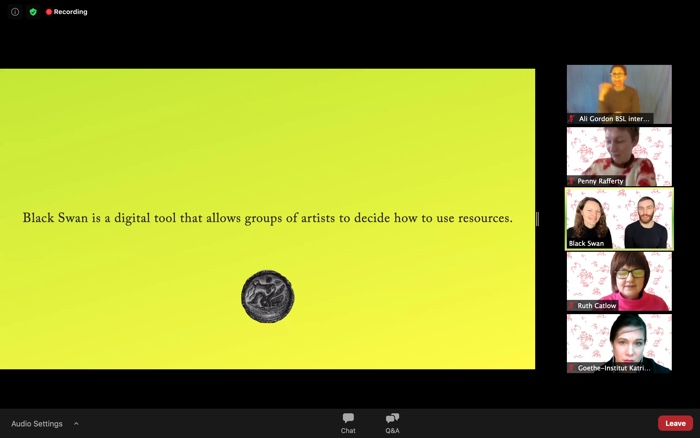 BLACK SWAN DAO favours artist-led peer-to-peer funding and community organising. It aims to give groups of artists more control over opportunities and research agenda. By automating bureaucratic processes. By making it easier to share resources, platforms, technologies, funding, tools, skills and redistribute collective power. Or by devising new mechanisms to share risks, invest and pull resources together. Instead of operating in a system that concentrates all the decision power in the hands of galleries, museums and funding bodies, artists and cultural practitioners who fall between the cracks of art institutions would be able to take cultural decisions together and commission projects that matter to them and their communities. 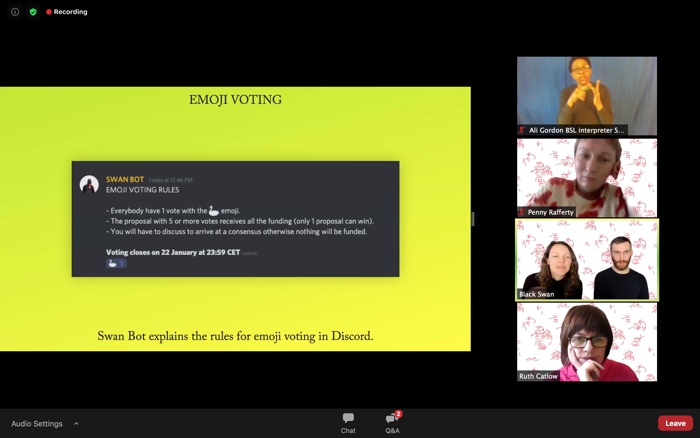 The most interesting and developed aspect of the project investigates new voting systems. Bowden and Lotti set up a working group of 9 people (André, Chiara, Claire, Leïth, Parrr, Shivani, Steph, Terence and Wassim) who met weekly for a month and communicated using the Trust Discord platform. The group made an open document listing proposal for artworks. 16 of them were selected and the group had to decide which one would receive funding for development.

Black Swan tested 3 types of voting that put the artists at the centre of cultural programming:

– Quadratic voting enables each user to think strategically and better express their priorities. They can chose between distributing the 100 votes they’ve received across several projects or allocating them all on one project. QV makes collective decisions more nuanced: participants can vote on how strongly they feel about an issue, rather than if they are in favour or against it. What makes QV so interesting is that it challenges the idea that democracy can be expressed only through the “one person, one vote” current system.
The winning project proposes to use speculative biology and storytelling to make/imagine a CO2-absorbing biofuel-producing algae machine for domestic use.

– Emoji voting: one person can cast one vote with a swan emoji. The artistic proposal that received 5 or more swans gets all the funding.
The majority of the votes went to a project for an audio play written and recorded in no more than 3 hours and in a single take. The play will explore various elements relevant to the Black Swan working group, Trust and the black swan theory.

– The lottery veto mechanism: all the proposals enter a raffle unless they’ve received a veto.
The winning project, ID for 5 people, aims to help homeless people without a valid ID to gain access to the welfare provided by the state.

Black Swan was developed at Trust, a collective project with a shared space in Berlin and an online community of 300 members. They are artists, designers, technologists and ecologists working with advanced technologies and experimental theories.

Lotti and Bowden plan to test the system with the whole community of Trust Discord members to see how the group size changes the dynamics and the voting process. The Black Swan model was customised for the Berlin art community and the team hopes that, in the near future, they will be able to offer it to other groups and cities so that they too can create systems that place resources into the hands of the users rather than the gatekeepers of the arts.

Another work-in-progress element of Black Swan is that its creators have not used blockchains. Yet! Still in its early phase, the project has been conceived to be easy to use for less tech-savvy people who might not own the cryptocurrencies necessary to use most blockchain networks. At the moment, the system relies on a kind of ‘paper blockchain’ where Lotti and Bowden role-play different decision-making processes, investigate their implications and test their assumptions.

The next online meeting of DAOWO Sessions: Artworld Prototypes will take place on 4 February 2021. Johannesburg’s DAO (Covalence Studio) will present a network of resources, skills and support for creative practitioners with the goal to rethink equitable artistic practices that can thrive under restricted movements and collapsing economic infrastructures. All events take place at 9.00am GMT on Thursday and are free to access with booking required. All the sessions are in english, with a sign language interpreter. The programme is a partnership between Furtherfield, Goethe Institut and Serpentine Galleries.

Related stories: Artists Re:Thinking the Blockchain; Value extraction and the workforce of the cryptocene; César Escudero Andaluz. So many ways to mess up with surveillance capitalism; Using respiration to mine crypto-currencies; Trickle Down, A New Vertical Sovereignty, Digital Cash. The Unknown History of the Anarchists, Utopians and Technologists Who Created Cryptocurrency, etc.