Libby Heaney is an artist and a quantum physicist. She has been working with IBM’s quantum hardware and Qiskit, an open-source software development kit, for three years.

For her solo show at arebyte in London, Heaney has created an immersive experience using quantum computing as both medium and subject matter. Packed with giant octopus cushions, glitches, satirical ads, an unearthly atmosphere and a garden of earthly delights, The Evolution of Ent-: QX is both a celebration of quantum physics and a warning that, unless we start to engage with its mind-bending, shape-shifting and radical mechanisms in a creative and ethical way, the technology will end up being harnessed by the Big Tech for purposes that might not benefit society as a whole.

As soon as you step inside the arebyte gallery, you find yourself in the lobby of a fictional start-up company called QX, (Quantum eXperience). The parody QX ads and brand videos that greet visitors deploy the kind of slick aesthetics and inflated rhetoric that the tech industry uses to promote its products and services. In this case, the product is quantum technology. By emulating big tech’s communication strategies, Heaney not only exposes the dynamics of profit, techno-solutionism and surveillance capitalism but she also establishes a critical space of enquiry. A space that makes more tangible and comprehensible the transformative changes that quantum computing is expected to bring to tomorrow’s everyday life. 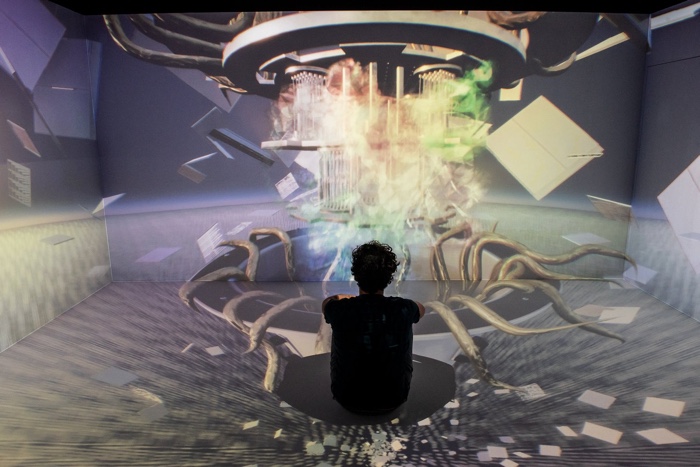 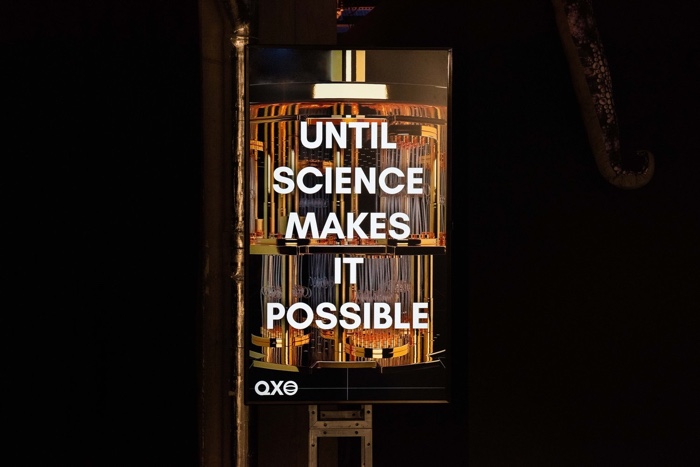 As visitors go through the immersive installation, they experience the physics that underpins quantum computing. The artist describes it as behaving in a fluid, shifting and slime-like way.

The new visual language created via Ent- provides a starting point for future alternatives to how we think, talk, and enact upon political, social and environmental issues. The idea of something being in multiple states at the same time – the quantum superposition – could be another way to rethink gender, for example, or as a metaphor to reimagine hierarchical relations within institutions or governments. The way that quantum entanglement – a phenomenon in which entities exhibit strong correlations that cannot be explained by classical physics – could be coupled with the entwined state that lies within all matter leaves the areas of futurity, responsibility and kinship (amongst others) open to new interpretations. 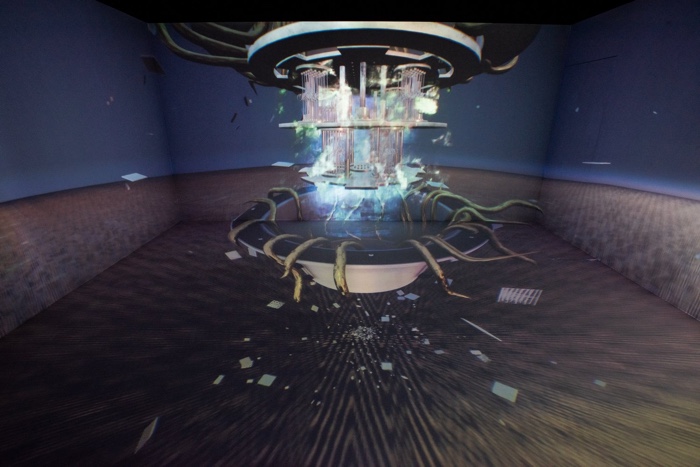 I got in touch with the artist, researcher and scientist to learn more about the installation:

Hi Libby! How did you go from a background in quantum computing and physics to an art practice?

I loved art at school because it was an escape from the chaos at school and home and making things really relaxed me. However, because I come from a working-class family, I was encouraged to study something they thought would be more stable jobwise like physics. All through my time as a scientist, I was drawing and making art, and it was only a matter of time before I switched back again. I’m so glad I did!

You were probably the first artist to work with Quantum Computing in 2019. Why do you feel it is important that artists engage with this new area of study?

Throughout history, artists have experimented with new technology so of course, it was natural to start experimenting with quantum computing when I had access to the machines. IBM currently has 5 qubit quantum computers available to the public and a wonderful online textbook that explains how one can write small programs and generate quantum phenomena like entanglement. I used to think these machines were too small to make any meaningful art, but recently I wrote some video editing software using entanglement data from a 5-qubit machine and the results were really strange and exciting.

Can any artist who doesn’t have your background grapple with quantum computing in a meaningful way?

There’s definitely a learning curve, but there is with traditional, digital coding too. I would really suggest experimenting with IBM’s public quantum computers using their Qiskit textbook, extracting data from various algorithms and then using that to generate forms using Processing or Unity or another digital software package. One can learn so much by actually doing and experimenting rather than reading a book or listening to a lecture. 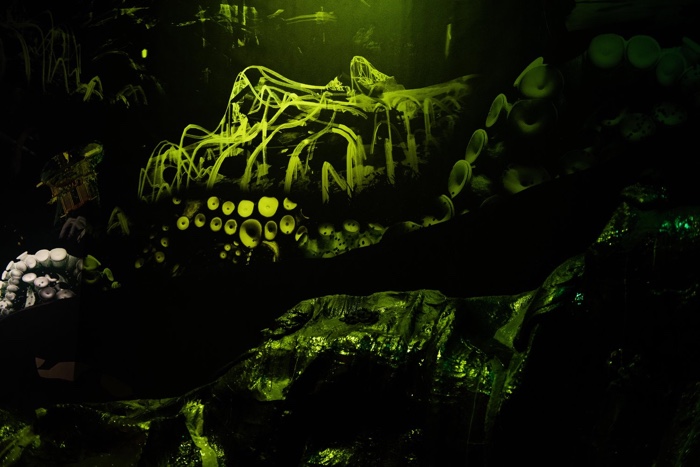 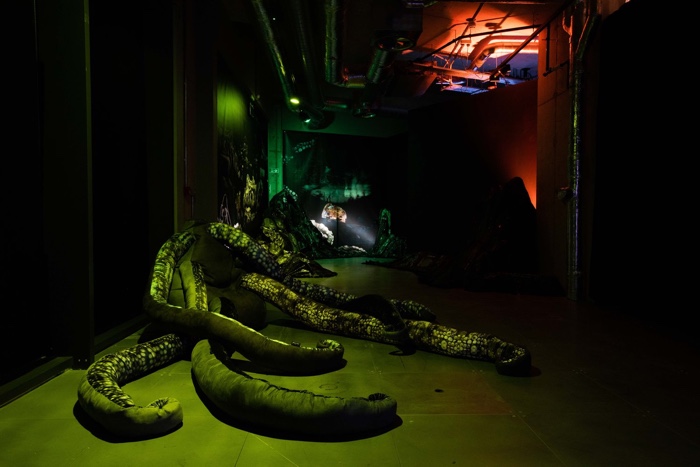 Which strategies do you use to communicate to the audience the complexity and invisible processes at play inside quantum computing? Is it about being didactic, about finding new metaphors, about developing a new language or maybe a new aesthetic?

I think science is didactic and that can only go so far in expressing the themes I’m interested in. Rather back in 2019, I asked myself how can I use the pluralities and strong correlations from entanglement within a quantum computer to develop an aesthetic that wouldn’t otherwise be developed. A blurred pixelated aesthetic was the result, it was surprising and exciting as it could only have been generated from quantum data. Using that, with a team of developers, I’ve created an immersive experience, where groups of people can experience the invisible processes inside a quantum computer through their bodies and perceptions.

The Evolution of Ent-: QX, your exhibition at arebyte, features motifs from Hieronymus Bosch. Why did you bring one of his paintings into the installation?

Unlike quantum computing, which is not yet really in the public’s awareness, Bosch’s painting The Garden of Earthly Delights is really famous. In my mind, there’s an ongoing question about how to present advanced technologies to a general audience. Therefore by connecting Bosch to quantum computing, it gives my audiences an accessible way into the themes I wanted to speak about. For instance, I wanted to centre and celebrate hybridity and most people are familiar with Bosch’s hybrid monsters. Viewers also remember the naked people in The Garden of Earthly Delight’s central panel and may ask themselves why there are no humans in my animation – perhaps they realise that they are the humans in the work now, experiencing desire around quantum art through their phones screens or bodies. I also wanted to speak about the future of quantum computing, in which through Bosch I align with both heaven and hell. 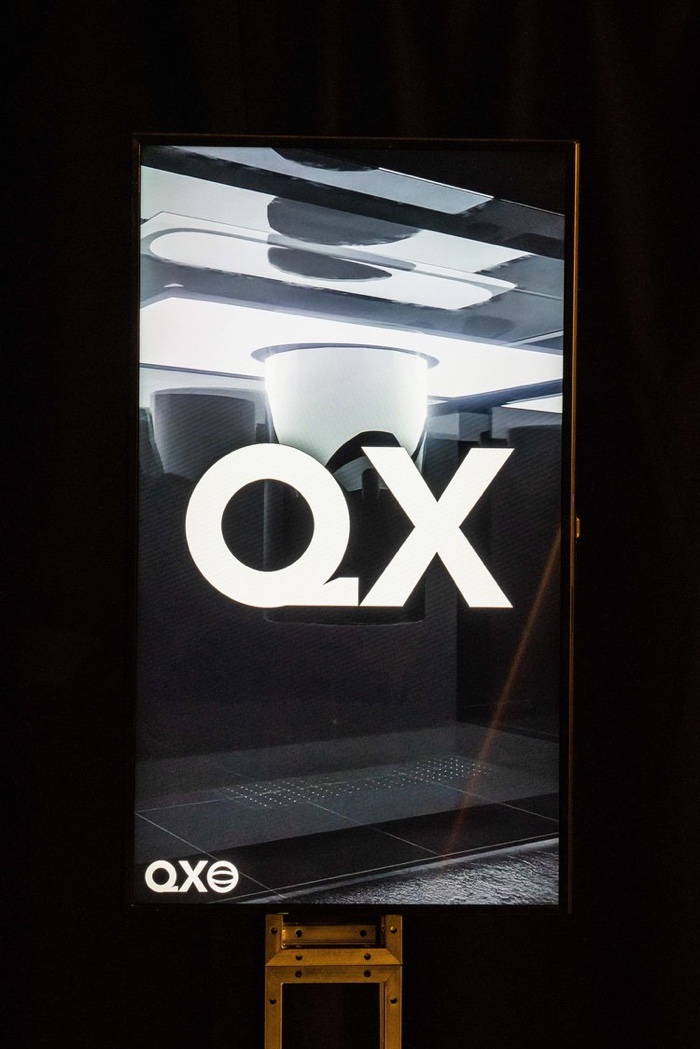 The Evolution of Ent-: QX looks with irony and concern at the future corporate exploitation of Quantum Computing. Do you feel that there is still agency, time and opportunities to ensure that the technology doesn’t follow a purely capitalistic path?
You explain how QC can help us think beyond binaries and reach deep interconnectedness. How optimistic are you about the way it will shape the world in the future?

There is time as full scale quantum computers are still around 5-10years away, but I think big tech companies and governments are following a purely capitalist agenda around quantum computing and the momentum is such that I doubt they can be swayed off their path. I like to think that my work will raise awareness of quantum computing in new communities and may have some influence particularly when I speak to former science colleagues who rarely think about ethics and the real world impact of their work.

There is a radical potential underlying quantum computing. To access this, perhaps creatives will develop a quantum games engine, which will enable folk to experience the shapeshifting pluralities and entanglements of the quantum world. Perhaps being inside these new worlds will feel like a new type of acid trip, which will open people’s eyes to new ways of experiencing ourselves and each other. How much future counterculture movements, like one based on a type of quantum virtual reality (QVR), can shift late capitalism without becoming consumed by it is difficult to say… it’s hard to imagine moving away from capitalism right now… (I’m writing this as it’s almost 40deg outside in London).

One of your areas of investigation is the kind of power structures that new technologies give rise to. The ethical pitfalls, biases and potential dangers of AI are fairly well known today (though certainly not adequately addressed). How about the development of Quantum Computing? What could go wrong for humanity?

Quantum computing will lead to a paradigmatic shift in how we process information and understand the world. For one, I believe QC, when fully developed, will exponentially extend and accelerate modes of surveillance capitalism and its attendant biases and pitfalls. And no one is talking about this. Quantum computers are also a weapon, as they will be able to break all currently used encryption including the blockchain. Whoever develops one first will have a huge advantage over everyone else. Quantum computers will also be able to simulate matter at a resolution not achievable with even the best supercomputers, leading to new drug design and better materials. While this sounds great and new materials are certainly needed for energy storage and transfer, one may also imagine quantum computers being used to develop new lifeforms, new types of bio and chemical warfare and for manipulating people’s genes and DNA. 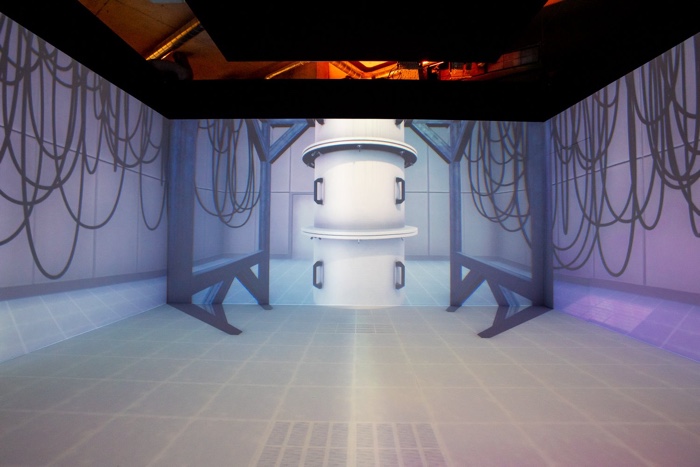 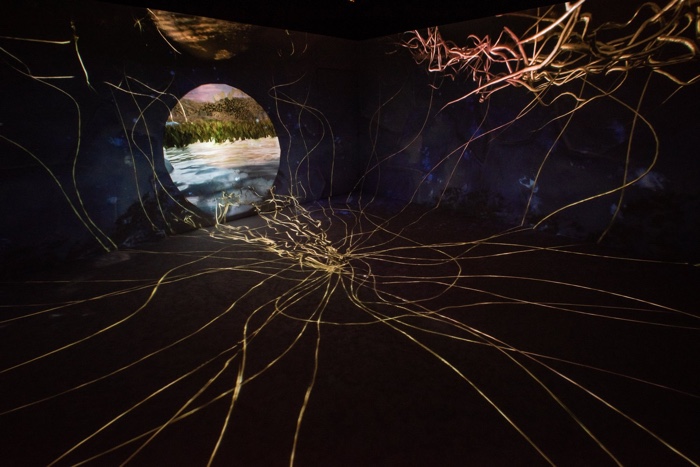 I have a curiosity about QC and I’m not sure you’ve looked into that issue yourself but I never managed to understand whether QC will be less damaging to the environment than digital computing. In terms of extraction of resources to build the devices and infrastructures or in terms of energy consumption. Do you have an idea about that?

Because quantum computers are a type of reversible computer, the energy required to run code is much lower. They don’t chuck out as much heat as our digital devices.

Matter qubits should be cooled close to absolute zero which takes energy, but while the computational power scales exponentially, the energy usage scales only linearly so this is good. There is a liquid helium shortage so this method of building a quantum computer might not be sustainable in the future. However, there are other methods which do not require cooling like using photonic qubits.

What is next for you? Any upcoming exhibition, research or project you are working on?

Ent- is travelling a bit – as a full dome version to Munich planetarium and to Ars Electronica, Linz. In terms of new work, I’m currently working with Mozilla Foundation on a project investigating what would happen if the emergent systems of nature informed our data-driven systems and I’m also working with NeON Digital Art Festival in Dundee and Glasgow University on a quantum world-building project.

The Evolution of Ent-: QX. Libby Heaney runs until 20 Aug 2022 at arebyte Gallery in London.
On 26 July, you will be able to follow the streaming of Quantum Slimifications. Libbey Heaney in conversation with Mónica Bello and Nora N. Khan.