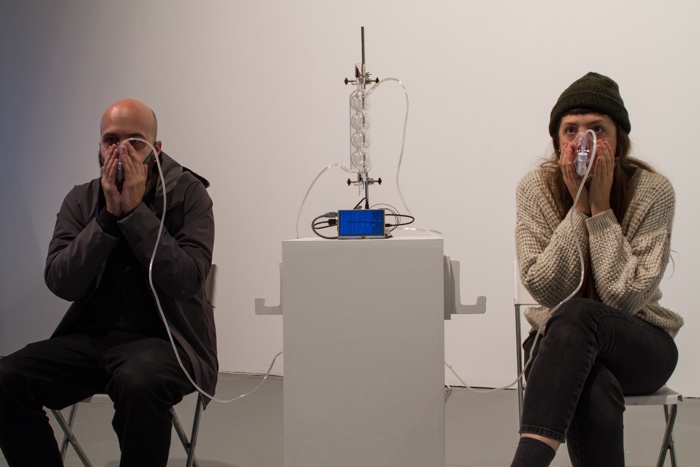 Max Dovey is an artist, researcher and lecturer whose performances explore how the human experience is affected by data and algorithms. His works include a bar which bouncer is in fact an image recognition software that only admits partygoers who look hipster enough, a game show that investigates the role of human labor in the production of image recognition algorithms, an event that explored the disappearance of social responsibility in the modern world of finance, etc.

His latest piece, Breath (BRH), uses human respiration to mine crypto-currencies. A respiratory mining rig inspired by a 19th century apparatus converts breathing into a hash rate for a micro computer mining on the Monero (XMR) blockchain. The volume of breath that is exhaled dictates the total amount of financial profit accumulated through mining. 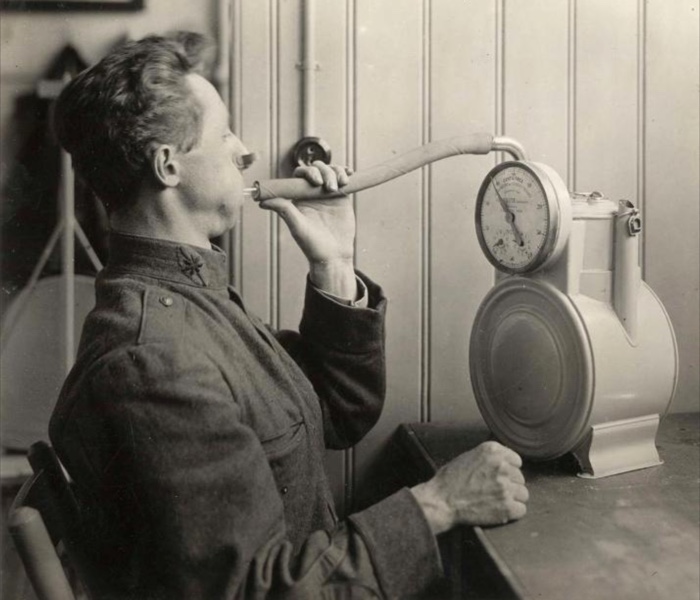 A student pilot at the aviation school blows air through the glass mouthpiece of a Spirometer. Photo: collection magazine Het Leven, 1925, via

The piece is presented as part of an imagined narrative where the body has become a biological system for producing capital and breath becomes a universal currency. The narrative tells the story of how breathing became a globally recognised currency and how bio-economics combined markets and the body to create a new homo-economicus. In this story, breath is used to exchange for goods & services and this bio-economic system encourages people to live healthier lives.

Turning lung exhalations into mining on the blockchain network not only hypothesizes that the body might one day play a more direct role in the financial systems but it also suggests that there might be more sustainable methods to maintain blockchains. 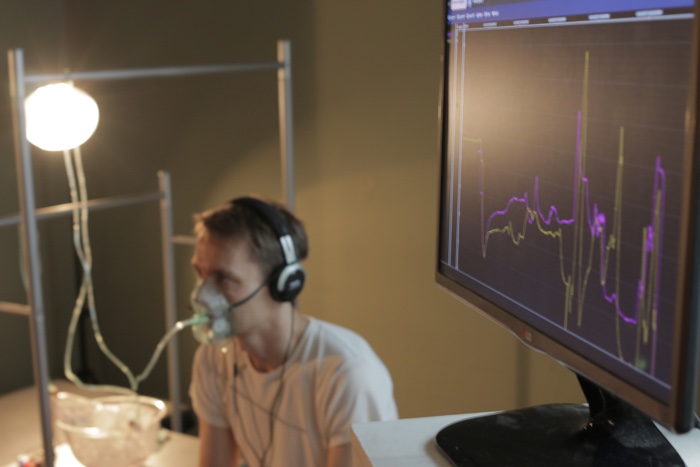 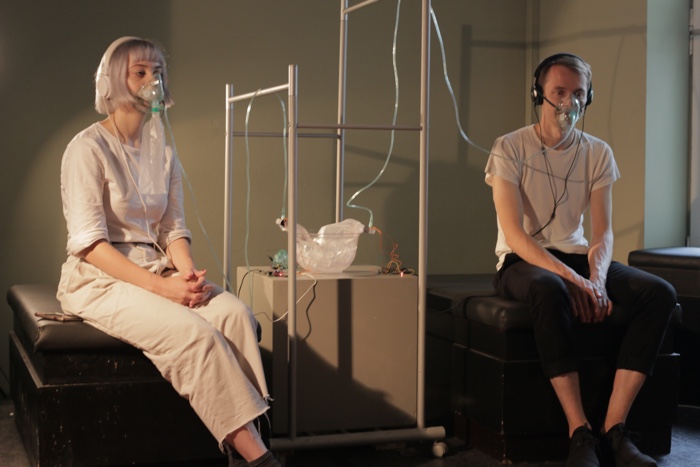 I asked the artist to tell us the secret to mining half a penny through breathing:

Hi Max! Why did you choose human respiration to mine crypto-currencies? It looks so invasive…

Using Breath as currency is where this idea originated from. I wrote a short story in which breath became a universally recognized currency. In the story breathing becomes a fluid unit of value, that cannot be stored or accumulated, and is encrypted through microbes in each respiration. It leads to a rise in bio-economic hardware that enable every living species to become an economic agent, a hybrid homo economicus. The narrative describes a world where bio-economics has integrated health and finance to encourage people to live longer, healthier and more profitable lives. Exercising becomes financially profitable and healthy lifestyles lead to a healthy economy. It also fixes net capital to human population, and prevents inflation or accumulation because breathing disperses in an ephemeral, transitory nature.

The installation emerged from this economic fiction, but the spirometer was used as a medical device to diagnose pulmonary diseases – most commonly pneumoconiosis which is refereed as the black lung disease. The black lung was an acute condition diagnosed in people exposed to coal over long periods of time and was prevalent in many miners through the industrial age. So the spirometer has a medical history for diagnosing the physical affects of coal mining.

In Breath (BRH) I am using a spirometer to perform crypto-mining through lung exhalation, a device that was used to measure the harmful effects of coal mining on the human body. When considering how to perform the computational labour required to mine crypto-currencies the spirometer has a history of registering the health and well-being of the industrial miner and felt relevant for connecting computational mining back to the human condition.

How about the hash rate? Does it only depend on the power of the individual’s lung? What are the other variables that control its movements?

The hashing rate of the micro-computer is determined by the lung capacity of the people breathing into the spirometer. So the computer is only mining when people are exerting air into the spirometer and the air pressure of the spirometer determines the rate at which the computer mines at. The traditional process of mining crypto-currencies requires a computer dedicated to validating transactions made on a digital network known as a blockchain. Financial rewards are allocated to computers that are the first to verify new transactions and initiate new blocks that store a record of each transaction on the blockchain ledger. While there are different algorithms that can be used to mine crypto currencies, the most common Proof-of-Work method requires intensive computation to solve encrypted mathematical puzzles that verify legitimate transactions and receive financial rewards for being the first to do so. The process of guessing the correct alphanumeric string of each block is known as ‘hashing’. A computers Hash rate (H/S) has become a unit with which to measure the speed of a computer processor for doing this specific task of mining crypto-currencies.

Example:
For Breath I use a small raspberry pi 3 micro computer with a 1.2GHz Quad-Core processor is capable of a hash rate of 20 kH/s (20,000 calculations per second)

In 2013, the difficulty rating for mining bitcoin exceeded one 1 Petra Hash (that is equal to 1,000,000,000,000,000 one quadrillion hashes per second). There is a lot of discussion about the costs of securing bitcoin transactions and the environmental damage that current proof-of-work protocol is doing to the environment. The financial costs of acquiring and maintaining specialised graphics cards for mining has become extremely costly and harmful to the environment. To assist in converting the proof-of-work protocol to a respiratory bodily procedure I created my own metric system for respiratory mining (see above)

After 4 weeks of exhibiting the piece it has mined £0.02p which is 0.00000408 BTC at an average rate of 36 mega puffs a second. To monitor the mining you can visit the project website respiration.ltd. 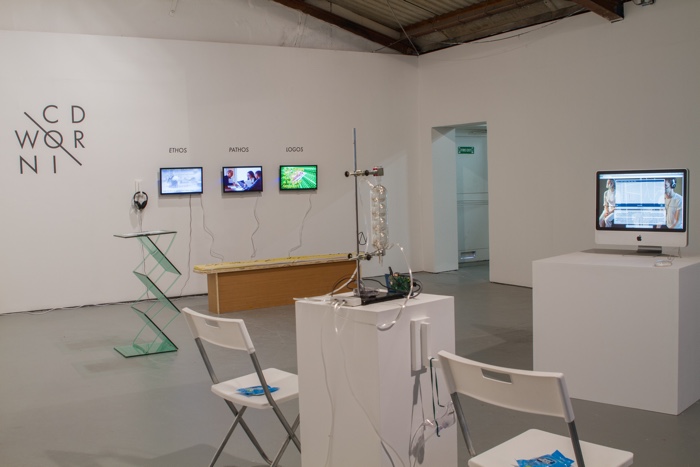 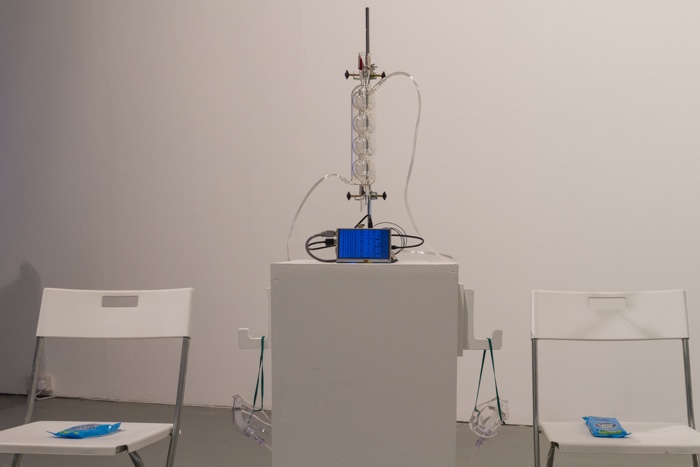 The description of the project on your blog states that the work “critically reflects on the financial bubbles created in crypto-currency markets.” Could you explain what you mean by that?

Yes. So a very early prototype of the project that I developed at the wonderful School of Machines in Berlin used breathing as a method to inflate the price of a fictional currency (rather than mining an ´actual´ crypto-currency.) In this earlier prototype audience members inflated the price of a currency through breathing to increase the value on the stock market. We organised a party where people were forced to use this currency for their food and drinks. I used the spirometer system to let people self inflate the value of the currency and trade shares of the currency based on the volume of inflation.

Some who were already savvy with the financial markets would instantly double their money by simply buying some shares when nobody was ´working´ at the piece before lying down and ventilating as hard as possible and selling those shares at the new inflated price.So the piece relied on people physically inflating the value of the currency through breathing and materialized the financial bubbles that occasionally erupt in the crypto-currency market.

Facilitating people to inflate the value of a currency represented the unexpected volatility within the crpyto-market that is caused by lucrative investments, paranoia and frenzied traders.

Influential investors known as ´Bitcoin Whales´ can dramatically effect the market and drive traders into a frenzy to avoid what is known as ´pump and dump´ scams. These scams use a network effect to manipulate and control the market, something that appears increasingly easy to do in the rise of ICOs (initial coin offerings) and start ups that use ICOs to crowdfund their business. The effect is a de-regulated, hyper volatile crypto market, where the calls made on the trading floor are now screamed within sub reddits and on social media, the dedicated community of followers scrutinizing data for signs of changing patterns or reassuring each other to ´HODL´ in times of financial uncertainty.

Post 2008 Wall Street traders have mutated into crypto trolls permanently promoting bitcoin far as they can whilst obsessing over the mythical identity of Satoshi, the latest fork & the potential of a 51% hack. Much of the relentless commitment towards the advancement of crypto-currencies originates from people that benefit from its proliferation, AKA early adopters. This commitment towards the advancement of crypto requires human energy, nothing riled with the electric demands of securing the network, but a strong, sometimes spiritual belief in the technology to overcome these ´bumps in the road´ and become a governance technology. The financial respiration system creates money from human exertion. Observing people hyper-ventilating and nearly suffocating in an attempt to gain financial returns on a speculative currency is how I chose to physicalize the chaotic and rabid trading culture in the crypto-markets. 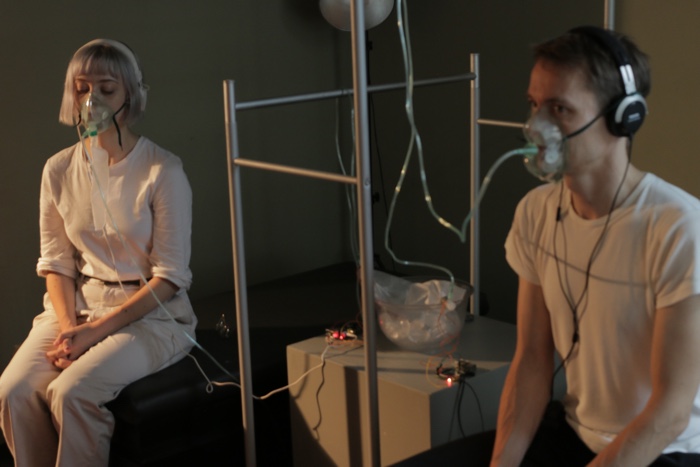 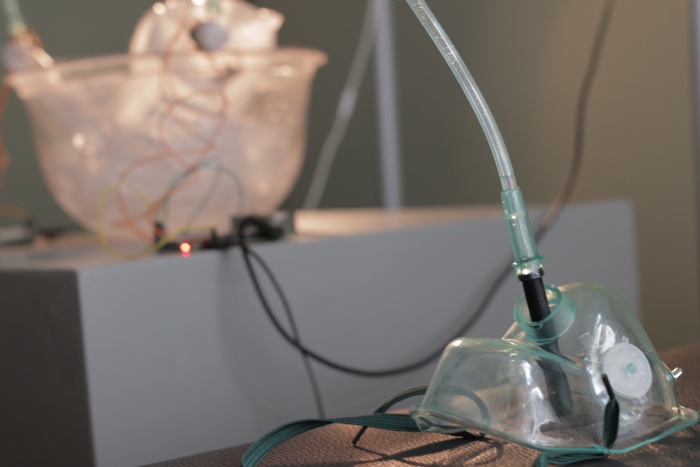 I really enjoyed reading “Love on the Block”, the essay you wrote for the book Artists Re-Thinking the Blockchain. The text anchored the BH into very mundane gestures, emotions and arrangements. Could you tell us a few words about the potential of the blockchain to bypass traditional civic infrastructures? What are the advantages of using this type of alternative?

I wrote ´Love on the Block´ after stumbling across some wedding vows encoded into the bitcoin blockchain. There is something poetic about a secret message encrypted into hex code but when I looked a bit closer the weddings were highly orchestrated performances of bitcoin propaganda. The grooms were usually bitcoin investors and appeared to use the marriage ceremony to celebrate their love for bitcoin (rather than the bride). These weddings used bitcoin payments and a bitcoin ATM to pay nominal amounts of bitcoin to one another with vows attached to each payment.

The desire to program and replicate legal and civic arrangements has significantly advanced from these bitcoin weddings. People are writing code into smart contracts, this is programmed code that uses the decentralized blockchain to store and execute scripts that imitate and enforce both corporate and civic law. The most frequently cited example use case for this is the smart car that locks its doors if the owner cannot keep up with its payments. But there are many intricate experiments going on that attempt to write the legal terms of love and divorce into computer code in attempt to manage, administrate and eventually govern social relations. I have been actively attempting to experiment with coded legal entities such as marriage contracts as part of my performance work. Through role play and scenario led situations we can begin to experience the consequences of having smart contracts administrate and govern aspects of our lives. Similarly the Breath project attempts to physicalize potential conditions that can be imagined through the the implication of crpyto and blockchain technology. Using simulation or scenarios in human interaction design to highlight and more importantly, to feel the implications of emerging technologies has become an increasingly sharp tool in the artist´s toolkit. This is still an essential method for critically engaging with some of the ideologies and narratives surrounding disruptive technology. Because the design of these systems are increasingly engineered towards logical or rational based outcomes, using performance, the body and some slapstick is how I choose to ideologically de-construct and respond to the implications of A.I, blockchain and any ´smart´ technology.

Breath (BRH) will be exhibited at MoneyLab at Somerset House in London in January 2018.

The work has also been featured at Generator Projects in Dundee, Scotland as part of Neon Festival and exhibited as part of After Money at Alt-w LAB in Edinburgh.