Jos Volkers hand-crafted a fourteen meter long replica of a V-2 rocket, the WWII long-range guided ballistic missile developed by the Germans to attack Allied cities as retaliation for the Allied bombings. The purpose of the artist’s weapon, however, is everything but nefarious. Instead of killing civilians and destroying buildings, this gigantic seed bomb was designed to be deployed in case of environmental emergency. “Detonating” it would bring back biodiversity in seriously compromised ecosystems. 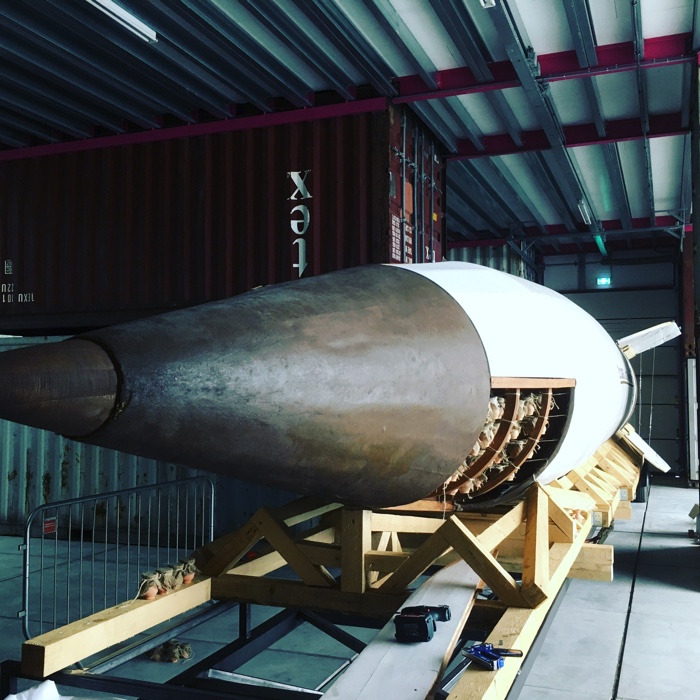 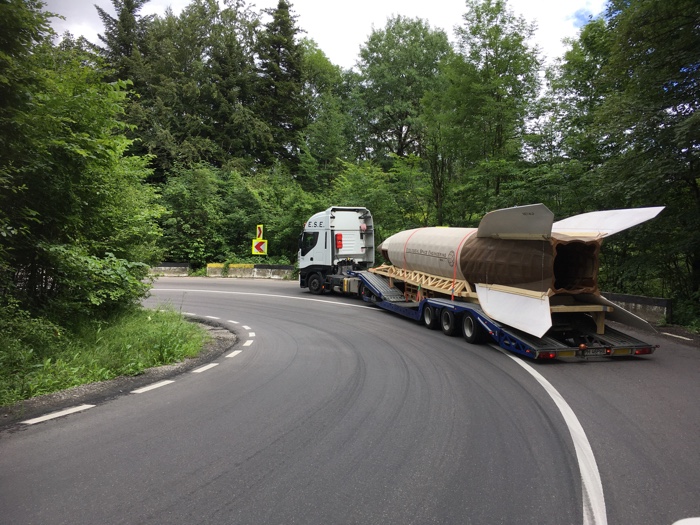 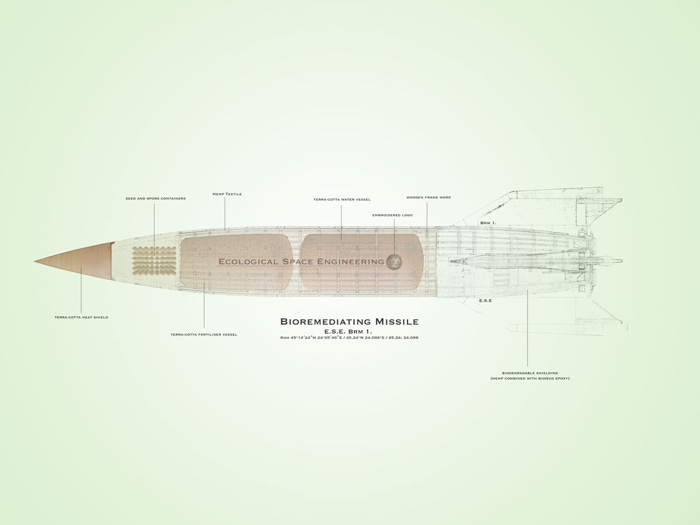 The artist spent two years creating this Bioremediating Missile: he built it using biodegradable materials such as wood, textile and clay and filled it with seeds, spores and nutrients. He recently hired a truck and took it on a European tour all the way from Romania to various art events in The Netherlands. Its next stop is Zone2Source, an international platform for art, nature and technology in Amstelpark, Amsterdam.

The rocket was developed within the framework of Volker’s fictitious company Ecological Space Engineering (ESE) which brings together reflections related to the ongoing ecological crisis, technological innovations, human interventions and conflicts in order to engage in speculative research about how we can improve the quality of life on our planet. 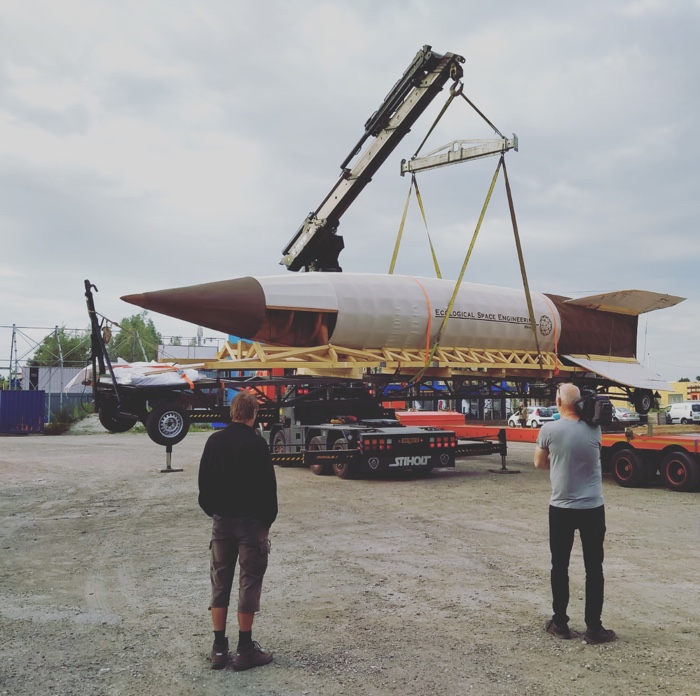 Hi Jos! The Bioremediating Missile (Brm. 1) is filled with seeds, spores and nutrients. Are you planning to make it explode? And if you do where would that be and what are you hoping the firing will achieve in the short, medium, long term?

In theory the Brm. 1. is made to store ecosystem specific seeds and spores from the South-Eastern Carpathians. In case this still pristine ecosystem vanishes because of logging, pollution, nuclear war or otherwise. If this happens, Ecological Space Engineering will have these ecosystem specific seeds and spores stored in the Brm. 1. Ready for use in order to renew, restore and bioremediate this severely damaged area. The Brm. 1. can be dropped out of a helicopter or plane in the near future.

But if we look ahead, E.S.E. will create Bioremediating Missile launch platforms which will float like satellites in Earth’s atmosphere. They will be capable of measuring radiation and pollution, filtering carbon dioxide and methane. Until the affected area is ready to receive seed and spore inoculation.

Where most governmental space agencies spend their money to explore space and to find life on other planets, we as a non-governmental space agency use our finances to support life on Earth. In our perspective life on earth should be nourished and restored instead and, above all, protected against human mismanagement. This is how Ecological Space Engineering and Atmosphere Remediation Centres (A.R.C.) started to collaborate. With the Bioremediating Missile program, we investigate the possibilities to maintain and store ecosystem specifics, like seeds, spores, micro-organisms and minerals.

A.R.C. will develop Nature Oriented Aquatic Hovercrafts (NOAH’s), which will float in Earth’s atmosphere on a high altitude, filtering Co2 and carrying Brm’s. This enterprise is one of the most intriguing developments within the Bioremediating Missile program. By the process of filtering CO2, NOAH’s will produce fuel, mainly this fuel is stored and shipped to outer space docs. A part of the produced fuel stays on-board in case of turbulence or malfunction of the aquatic system which propels these hovercrafts, in this way NOAH’s can be stabilized and brought back into position.

These outer space docs function as hubs for space exploration purposes. With this invention, we are able to finance our Bioremediating Missile program because governmental organisations are mainly focused on exploring the boundaries of space.

The above scenario seems very unlikely, so the Brm. 1. will at the end of its lifetime – after its journey – probably decay fully in the garden of Np3 M0Bi in Groningen. If this happens I might need to replace all the seeds for new seeds from the area around Np3. In the case of flora forgery and to avoid global homogenisation. 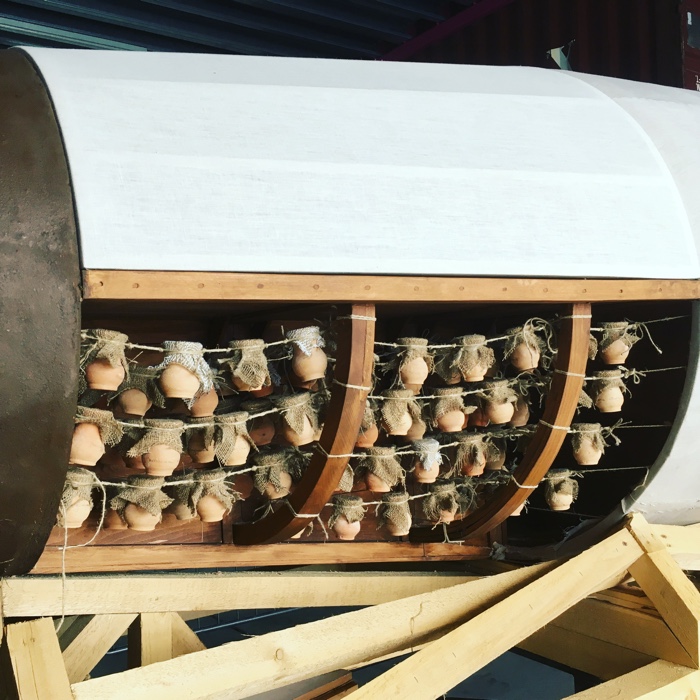 What kind of seeds and spores does the Missile contain and how did you select them? Are they meant to adapt to specific ecosystems for example?

The E.S.E. Research Group collected the seeds and spores in the Southeastern Carpathians. Of course, some are ecosystem-specific seeds and rare or unable to grow in other ecosystems. We selected them carefully by researching specific areas such as meadows and forests and waited for the right season to collect just small amounts of seeds and spores. 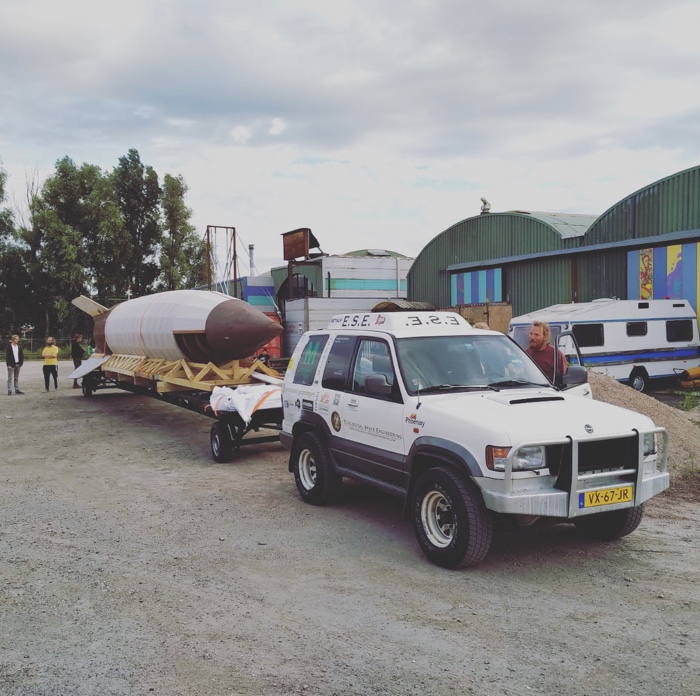 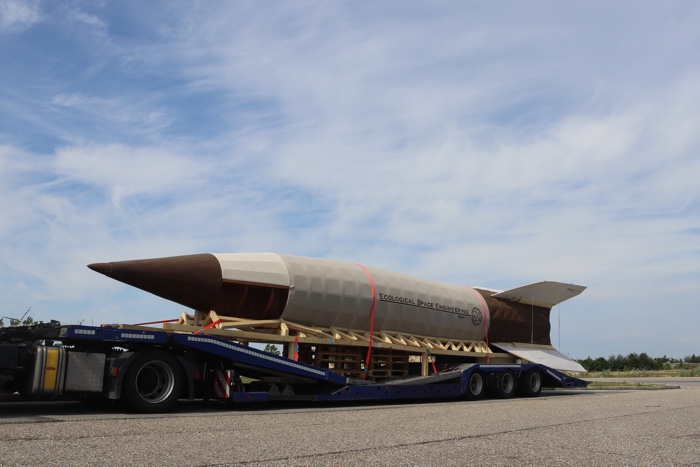 I’m very curious about the transportation of the Missile from Romania to several events in The Netherlands. From the instagram images, it appears that its 14 meter long body is traveling in full view (and not hidden inside a big container). Is it because you want to use the transport of the missile as a springboard for conversations? What kind of reactions do you get when you are on the road with it?

Ecological Space Engineering plays a vagarious role. Although E.S.E. claims that it manufactures instruments that have the potential to restore polluted, impoverished or damaged ecosystems with natural processes, it must make concessions. The use of burdensome assets such as machinery and transportation are matters that are unavoidable with regard to the manufacturing and presentation of the Bioremediating Missile. The transportation of the Bioremediating Missile serves an important message. Every company that is moving towards the transition to a green economy has to deal with these environmental issues. This dualistic message must nurture a dialogue.

From an artistic point of view, I give my work ambiguity and let the spectator free to interpret it.

Although I present at the same time a context and inform the spectator, the question remains to the audience whether the given context, in reality, is correct or not. The context creates a framework and represents the work, but actually the context does not serve an absolute truth, even though it is based on absolute values.

The artist does not seek for truth, he creates it.
(Maxim Gorky: Literary Portraits, page no. 118)

The transport of the missile caused many different reactions, depending from country to country. In Romania, the reactions were above all the funniest, maybe because people are less acquainted with this type of art or just because we travelled half of the time through villages. In most cases, people just reacted delayed by turning around after it already past. Some did put hands on the side of their hips and gazed after it. Kids, in general, pointed to it, trying to explain to their parents a rocket is passing by, if the parents could get a quick peek they reacted a bit shocked. Cars that drove next to the missile and filmed the missile, sometimes causing some (luckily) minor problems in traffic. 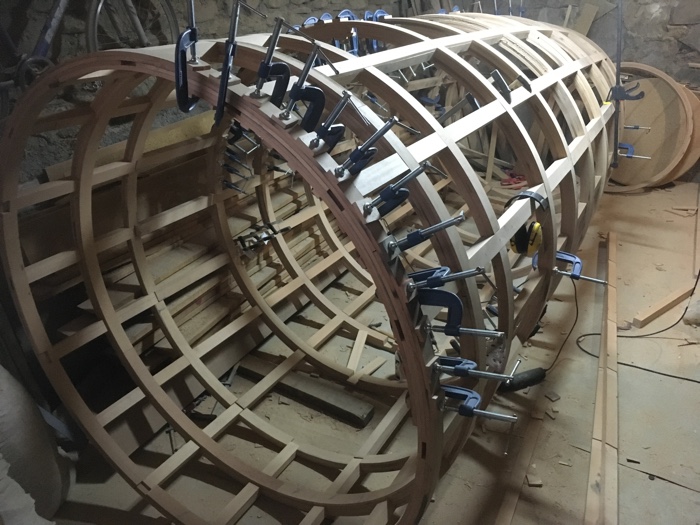 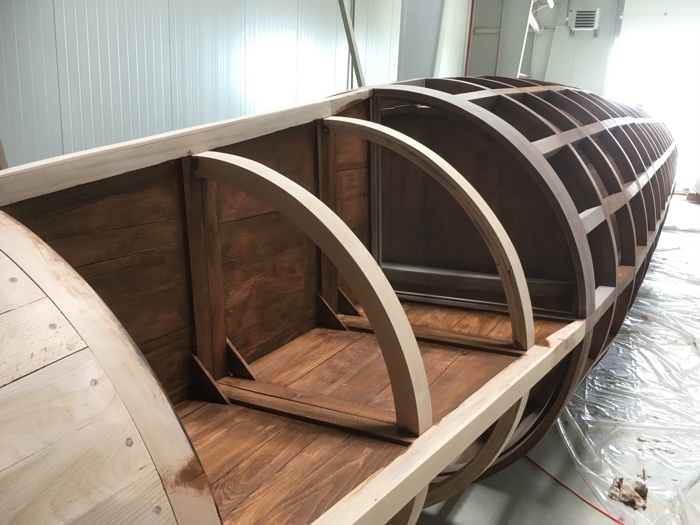 Why did you choose to enclose the seeds inside a missile? Why this menacing, war-like image?

The V-2 rocket was developed by the Germans to win WWII, luckily this didn’t happen but instead the Americans and the Russians took the researchers and technical drawings. This fact caused the weapon and space race between the two nations. This is why the V-2 rocket not only embodies war but also embodies technological development. Without this space technology, we might not have had satellites in space, and without satellites, the world we know would not exist. Many fields of research actually rely on space technology such as meteorology, geography and biology. But space technology is also used for ensuring food security, reducing the risk of disasters, preventing humanitarian crises, monitoring natural resources and reducing poverty, as well as for telecommunications and health.

Another reason is that the shape evokes exploration, admiration and fear. Strangely enough, the V-2 rocket became over time a very strong symbol. Using this symbol, making it the world’s largest seed bomb, fully biodegradable and harmless made a lot of sense to me.

Any upcoming events, fields of research or projects you could share with us?

In my mind I’m always busy with how to solve environmental issues, E.S.E. is for me a tool to express the concerns I have and I allow this fictional company to over exaggerate these concerns in order to create awareness among people. Since 10 years I’m visiting Romania on a regular basis and I’ve lived here for the last two and a half years, I’m very impressed by the natural wealth and still pristine wilderness. Only somewhere something went very wrong in my perception. In the past – during communism – people only had to deal with materials that were biodegradable, but after the fall of communism, capitalism kicked in and the plastic producing industry caused a huge unforeseen problem. In combination with corruption and mismanagement, this problem became bigger and, to this day, it remains unsolved. Besides, it is affecting the environment. This also gives me a bad aftertaste, which is a huge pity if you just made an incredible and beautiful walk through one of those pristine areas.

Something needs to be done against this mess and people responsible for throwing trash in nature need to get more awareness so they realise what the consequences of their actions are. Garbage is practically everywhere alongside rivers and roads. Of course, some people do clean up garbage, some organise special events, others keep the streets clean in villages. The question only remains whether this garbage will be processed or just dumped back into the river.

So one of my new ideas is to get a garbage truck, paint it all white and write Ecological Space Engineering on it and let specially trained employees clean garbage from hard to reach areas near rivers with special made equipment.

Somewhere I have the need to do something really constructive against pollution.

Bioremediating Missile by Jos Volkers will be at Zone2Source in Amstelpark, Amsterdam and remain on view from 15 August until 5 September 2020.

Previously at Zone2Source: Trust Me I’m an Artist. Ethics surrounding art & science collaborations. Part 1 and Part 2, Machine Wilderness: a world of ecological robotics and Symbiotic Machine, the photosynthetic robot that feeds on algae.