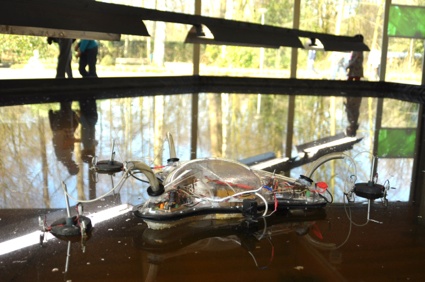 Having previously given life to a robot that enables plants to move around as they please, Ivan Henriques has collaborated with scientists from the Vrije Universiteit Amsterdam to develop the prototype of an autonomous bio-machine which harvests energy from photosynthetic organisms commonly found in ponds, canals, rivers and the sea.

The Symbiotic Machine uses the energy collected from micro organisms to move around in search for more photosynthetic organisms which it then collects and processes again.

The Symbiotic Machine is currently spending two months in an aquarium in the Glass House in Amstelpark, Amsterdam.

Short conversation with the artist: 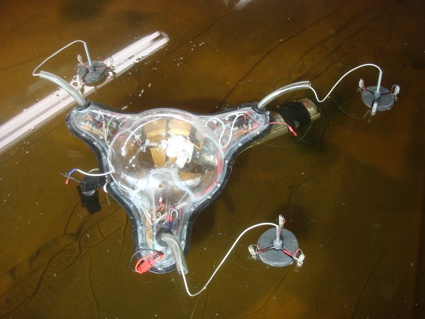 Hi Ivan! How does Symbiotic Machine relate to Jurema Action Plant. Is this a continuation of that previous work? Did you learn something from JAP that you are applying to the Symbiotic Machine? Or is this a completely different exploration?

The research that started with Jurema Action Plant led to the development of the Symbiotic Machine (SM). I have created a range of works that explores such concepts as: the future (reinvention) of the environment; the acceleration of techno-scientific mutations; when nature becomes culture; the use of natural resources; where these hybrids of nature and technology will take place in the near future and reshape and redesign our tools to amalgamate and be more coherent with the natural environment (these concepts were discussed in the e-book Oritur). When JAP was being exhibited I noticed that as the interaction between the person and the plant enables the machine to move, people were envision a living entity, which was responding to them – i.e. it likes me!, when JAP was moving towards the person and It doesn’t like me!, when it was moving away from the person touching it. That is the reason why I gave the Action Plant a first name: Jurema. 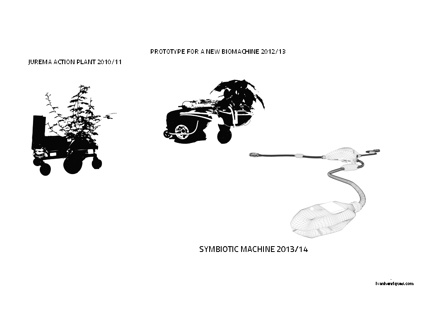 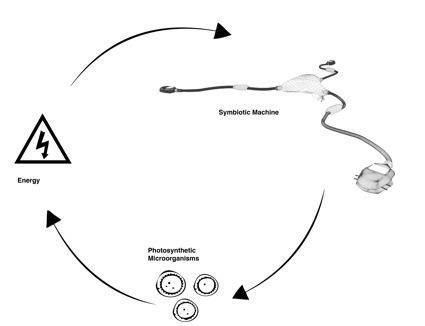 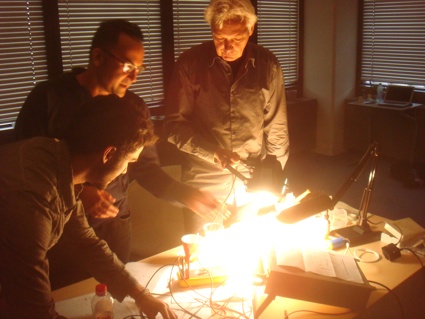 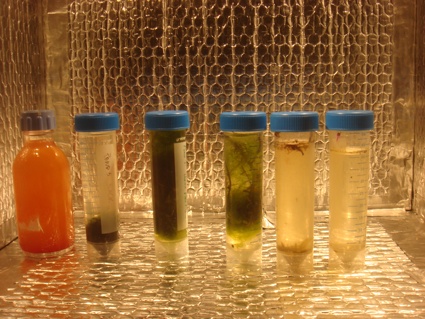 Could you talk to us about the collaboration with scientists from the Vrije Universiteit Amsterdam? How did you start working with each other? And what was the working process like? Was it just you setting up instructions and telling scientists what to do? Or was it a more hands-on experience?

When I first met Raoul Frese, scientist from the Biophysics Lab from VU Amsterdam, (The Netherlands) I wanted to develop further JAP. I got very inspired after his speech in a symposium at the former NIMK in Amsterdam about photosynthesis. Later we did an appointment to discuss further our possible collaboration. To develop the Symbiotic Machine we had several meetings in my studio and in his lab. Soon, Vincent Friebe, PhD student from Biophysics lab also joined the team.

In this project I wanted to create an autonomous system, which is able to live by itself, as most of the living entities do. For me it is very poetic to create a hybrid living system that can move to search for its own energy source, process it and have energy to do its own life cycle.

We had lots of hands on experiences and exchanging ideas and techniques. The project started with the concept and the technology we could use, but this Beta version was designed according to the necessities and mechanisms the bio-machine required. The project also had collaborations with Michiel van Overbeek who developed the hard/software and the Mechanical Engineer lab from CEFET/RJ (Technological University of Rio de Janeiro, Brazil).

What are the photosynthetic organisms that the machine harvests? Could you give a few examples? What makes them interesting for the scientists you were working with?

For this prototype we focused in a specific algae: Spirogyra. It is a genus of filamentous green algae, which can be found in freshwater such as canals and ponds. Spirogyra grows under water, but when there is enough sunlight and warmth they produce large amounts of oxygen, adhering bubbles between the tangled filaments. The filamentous masses come to the surface and become visible as slimy green mats.

I asked Raoul Frese why he is interested in photosynthetic organisms: ” Scientists are researching photosynthesis and photosynthetic organisms to learn how processes occur from the nanoscale and femtoseconds to the scale of the organism or ecosystem on days and years. It is an excellent example how a life process is interconnected from the molecules to organism to interrelated species. For biophysicists, the process exemplifies molecular interactions upon light absorption, energy transfer and electron and proton transfers. Such processes are researched with the entire experimental physics toolbox and described by theories such as thermodynamics and quantum mechanics. From a technological point of view, we can learn from the process how efficient solar energy conversion can take place, especially from the primary, light dependent reactions and how light absorption can result in the creation of a fuel (and not only electricity).” 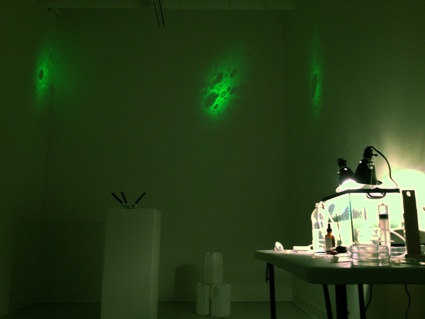 Why were you interested in photosynthetic organisms, and in creating a machine that would feed on them and function a bit like them?

My interest in photosynthetic organisms started when I wanted to develop further JAP in a way that a hybrid organism could harvest its own energy to live like a plant. In April 2013, during the residency in NY I had the opportunity to research these microorganisms when I created the installation Microscopic Chamber #1, using a laser pointer to magnify these microorganisms, where people could see in naked eyes projected on a wall different kinds of microorganisms swimming. These living organisms were collected at Belmar beach, in New Jersey and were displayed in the installation in an aquarium where I cultivated them.

The algae Spirogyra is very common in The Netherlands. The choices of the organisms presented in my works are based on the concept, their own technology and location of the specimen. One of the ideas is to adapt the mechanics and electrical system in the machine to be capable to function with the mili-voltages that plants, animals and us have. Create an autonomous system that could use such small scale of electricity to operate. After the residency I had several meetings with scientists from VU Amsterdam where I had the opportunity to research further the Spirogyra and other photosynthetic creatures.

In this research about plant and machines I want to find a way of coexistence between living organisms and machines more integrated, and inspire people for a possible different future.

Could you explain us the shape of the floating mobile robotic structure? Because it looks much more ‘organic’ than typically robotic. Could you describe the various elements that constitute the robotic structure and what their role is?

The machine is designed to communicate with the environment. For this first model the machine is planned to process the algae from specimen Spirogyra to generate electricity. As this specimen is a filamentous floating organism, the robot has to be in water, floating together with the algae.

The structure is composed by an ellipsoid of revolution with 3 conical shaped arms. Attached to the arms tentacles equipped with sensors. The structure is transparent to catch sunlight at any angle. The choice for an ellipsoid of revolution is to create more surface area for the electrodes (photocells) and to use more of the sun rays onto the photocells when the light reflects in the golden electrodes – using more sunlight by consequence. The tentacles make the robot extend its senses to search for algae. The arms create closed chambers to place electronics.

The machine has a complete digestive system: mouth, stomach and anus. See the video:

Sealed with a transparent cylinder a motor, an endless worm and a pepper grinder aligned and connected by one single axis compose the mouth/anus, like a jellyfish. This cylinder has a liquid inlet/outlet (for water and algae spirogyra) placed at the end part of the endless worm. The endless worm has an important function to pump liquid in and out and to give small propulsion for the machine. 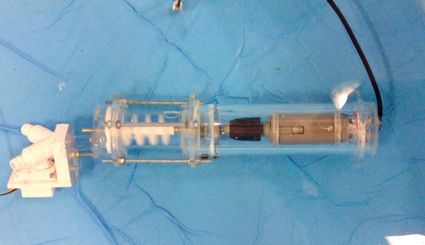 In order to “hack” the algae spirogyra photosynthesis’ and apply it as an energy source, the algae cell’s membrane has to be broken. The pepper grinder that is connected at the end of the endless worm can grind the algae breaking the membrane cell, releasing micro particles.

These micro particles in naked eyes looks like a “green juice” which is flushed inside the machine: the stomach.

A tube that comes from the end of the mouth with grinded algae goes though the stomach, inside the ellipsoid of revolution. This tube is fastened on a 2-way valve placed in the center of the spherical shape. Inside the ellipsoid of revolution there is another bowl, just one centimeter smaller aligned in the center. Placing this bowl inside, it creates two chambers: 1] the space between the outer skin and the bowl and 2] inside the smaller bowl. In chamber 1 the photocells are placed in parallel and in series. The photocell is composed by a plate covered with gold, a spacer in the middle covered with a copper mesh. This set up allows the “green juice” rest between the gold and copper. 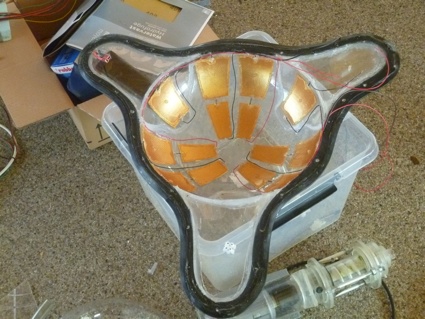 After the light is shed on the electrons of the grinded algae they flow to one of these metals, like a lemon battery. As all the photocells are connected, with the help from the electronic chip LTC 3108 Energy Harvester is possible to store these mili-voltages in two AA rechargeable batteries. A life cycle with functions was idealized in order to program the machine and activate independent mechanical parts of the stomach: it has to eat, move, sunbath, rest, search for food, wash itself, in loop.

The 2-way valve mentioned above is connected as: valve 1 hooked up with chamber 1 and valve 2 with chamber 2. When the stomach works is sent information to the machine that the valve 1 has to be opened. The algae flow to this chamber and the machine uses a light sensor to go towards where there is more luminescence to make photosynthesis. After the 10 min sunbathing (photosynthesis) the machine has to clean its stomach – and the photocells – to be able to eat again. Water is sucked in again with the mouth, and via the same valve from the algae, it pumps more water inside chamber 1 in order to have an overflow of this liquid in chamber 2. The liquid, which is now in chamber 2 is flushed out by the motor turning the endless worm and having the valve 2 opened. Fixed on the edge of the structure opposite the mouth, an underwater pump connected by a vertical axis with a servo powers the movement of the structure giving possibilities to steer 0, 45 and minus 45 degrees. The movement programmed for this machine was written concerned about the duration/time, space and energy.

What is next for the Symbiotic Machine and for you?

This version of the Symbiotic Machine still has to be improved and I would like to continue the research and develop this bio-machine further. I want to keep working to improve what was done. The exhibition is from March 9th until 27th April at the Glazen Huis in Amstelpark, Amsterdam.

To start this research it was only possible with support from Stichting DOEN and also to work with this fantastic team. There are another projects I am developing, keep your eyes on my website!