In 2006, Alexei Yurchak published Everything was forever until it was no more. The beautifully-titled book examined the political, social and cultural conditions that lead to the collapse of the Soviet state. The anthropologist argued that everyone knew the system was failing, but because no one could imagine any alternative to the status quo, politicians and citizens maintained the charade of a functioning society. 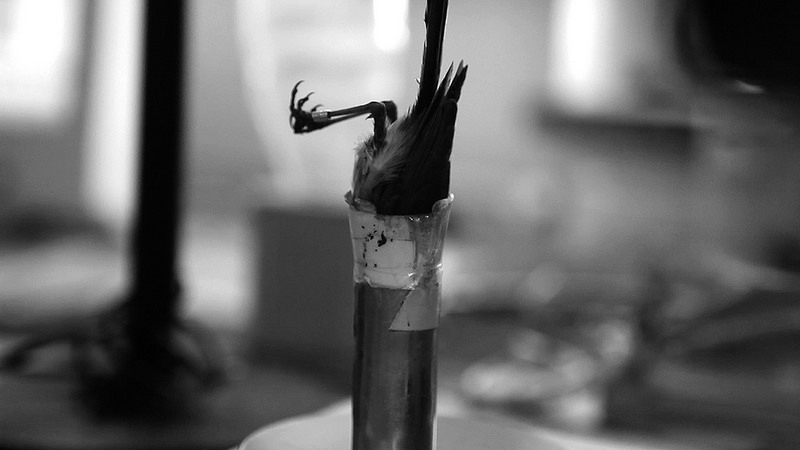 Everything was forever until it was no more is also the title of the first Riga International Biennial of Contemporary Art (aka RIBOCA) which closed a couple of months ago. I didn’t know about the biennial until i found myself in the Latvian capital for the always excellent RIXC Art and Science Festival (there’s still time to send your proposals for the upcoming edition of the conference and exhibition.) There were leaflets advertising the biennial at the hotel, i picked up one to read during my last breakfast in town and almost dropped my tea mug over another guest when i read that Katerina Gregos was the curator of the event. Gregos is an art historian and, to my eyes, the most perceptive and politically-minded curator we have in Europe.

Under her guidance, RIBOCA investigated the phenomenon of change – how it may seem inevitable (especially in these relentlessly accelerating times) and yet manages to take us by surprise. The works and artists Gregos selected investigated capitalism, technological revolutions, migration, Europe’s existential crisis, post-Soviet history in the Baltic states and our foolish destruction of the environment. I had only 3 hours to visit the biennial and could only run through two of the exhibition venues before i had to leave for the airport. These were probably the most exciting 3 hours i spent in 2018.

I’ll try and give an overview of what i saw at the biennial over a couple of blog posts. Today’s story is looking specifically at the works that make the Anthropocene disturbingly palpable. As befits an event that aimed to engage with the space of the city of Riga, many of the artworks that delved into our uncertain future on this planet were housed inside an abandoned biology faculty. Invading disused buildings is one of the tropes of contemporary art exhibitions but the ploy worked liked a charm as art pieces that examined the many paths to the demise of humanity cohabited with a once grandiose entrance, musty corridors and desolate labs.

Here are some of the RIBOCA works that embodied in the most distressing way the many threats and dimensions of the Anthropocene: 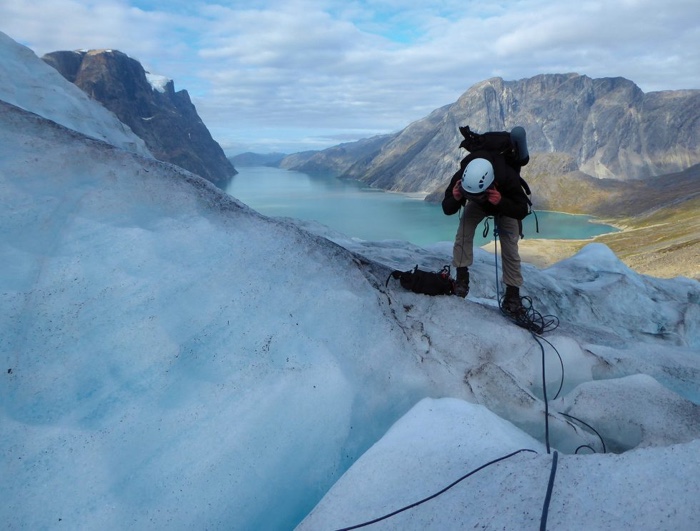 Jacob Kirkegaard traveled to Greenland in 2013 and 2015 to record different stages of ice melting.

The ice sheet in Greenland contain about 8% of the Earth’s fresh water. Particularly vulnerable to climate change, the ice is melting at an accelerating rate not seen for more than 350 years.

The alarming phenomenon is causing a rise in the sea level, which directly threatens populations who live in or near coastal areas. It causes other secondary effects, such as changes in the global ocean circulation patterns and in the patterns of rainfall.

Kirkegaard’s MELT sound installation features recordings of different stages of ice melting, moving from violent sounds of ice caps grinding against each other, to trickling sequences and flows of water. MELT traces how water moves through different aggregate phases, from solid to liquid, changing the combination of molecules. You can get an idea of what it sounds like in this video interview with the artist.

MELT dramatizes and makes perceptible a phenomenon that affects each of us but that remains too often distant and abstract.

IC-98 and Kustaa Saksi’s millefleurs tapestry (a pattern of thousands of flowers) is another work that reminds us, in a visually seducing yet disquieting manner, that the Arctic is one of the fastest warming areas on the planet.

The tapestry transports us into a dark future, when sea levels have risen and the human race is long gone, but the consequences of its past actions are everywhere. The scene is set at the current location of the Svalbard Global Seed Vault (the coordinates of which are in the title of the work.) The seeds that had been sent from around the world in the early 21st Century have sprouted in the warmer climate of the future. Svalbard is no longer covered with glaciers and frozen tundra but with lush meadows.

The carpet itself will not escape degradation. In the future, it might rot. The artists consulted with climate scientists and the people responsible for the seed program to identify the plants that would be viable in 2,000 years time. Some of the seeds of these plants have then been woven into the fabric of the tapestry, literally waiting for their time to sprout.

“Culture and nature are completely intertwined and even if humans disappear, nature will still be shaped by man, by humans, for millennia to come”, the artists told TL mag. “In a way, the Svalbard Seed Vault is a strong symbol of that. But what happens when those seeds start to have their own lives? Which kind of flora would be dominant from Svalbard in 2,000 years?” 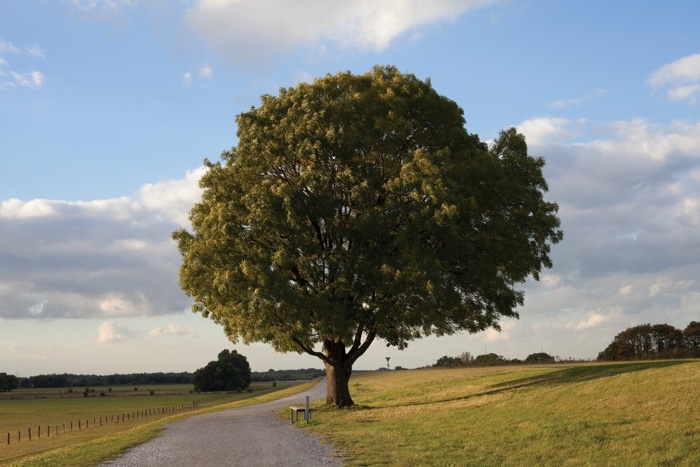 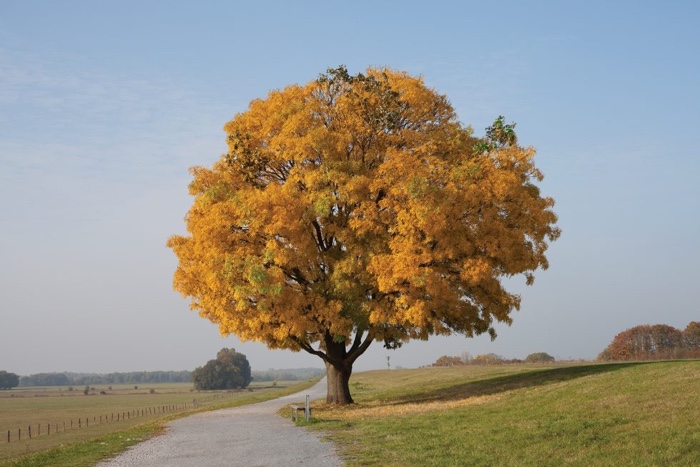 Michael Sailstorfer demonstrated in the most poetic way the absurdity of using technology and human efforts to counter a natural processes.

In October 2012, the artist selected a lone tree alongside a dyke of the Rhine, in the Ruhr area, one of the most heavily industrial regions of Europe. Once the first leaves began to fall in early autumn, he and his team collected them, preserved them, painted them and then re-attached them to the tree using a fine wire and a mechanical cherry-picker. This painstaking task continued until mid-November, by which time the tree had shed all of its foliage and the leaves had all been reattached.

The entire operation was documented on film. The footage of Anti-Herbst (Anti-Autumn) was then edited to exclude images containing people or machinery. The artificial transformation would look normal unless other trees in the background didn’t reveal that something is odd in the landscape.

“The goal of the project was to reverse a natural process simply by using human power or effort; to use human labour to artificially revert the tree to the way it looked four weeks earlier – green, in summer,” the artist told Frieze. “In the Ruhr area, it’s really hard to say what’s nature and what’s artificial. Of course, today anyone can walk outside of a city and enter a forest, but even there nothing is truly ‘natural’.”

At the end of the project, the team spent 3 days taking down all the leaves again. 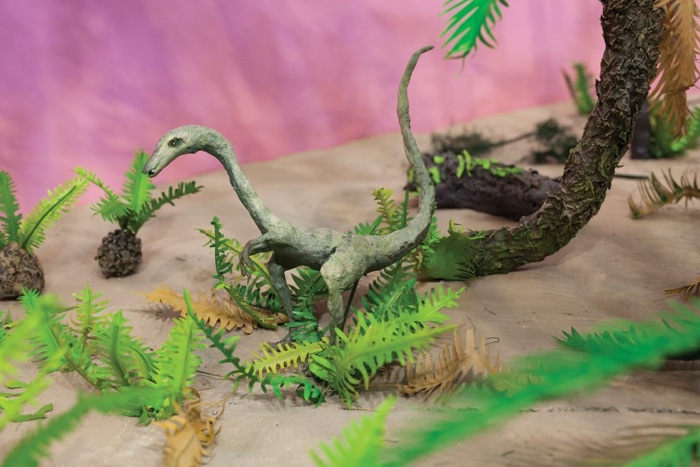 Katarzyna Przezwanska works in Warsaw. A few hundred million years ago, that area of Poland was located closer to the equator and covered by a lush tropical forest and inhabited by dinosaurs and other animals.

The artist collaborated with scientists and geologists to create a model of today’s Warsaw terrain from 200 million years ago.

After the mass extinction that ended the Triassic geologic period depicted in her model, life recovered during the Jurassic and the Earth became repopulated with the most diverse range of organisms that ever existed. These organisms then died and gave way to the mineral resources that can now be unearthed in the area: lignite and natural gas, and a major offshore oilfield in the Baltic Sea; large reserves of sulphur and other mineral resources include bauxite, barite, gypsum, limestone and silver; and rich deposits of salt. In so far as present-day Poland is rooted in its mineral economy, these resources are what remain of prehistoric ‘Polishness’.

Her hand-made diorama puts our short-sighted view on everything from energy to politics into the challenging perspective of deep time. It’s this tendency to disregard the long-term consequences of our decisions that have led us to cause tragic and unstoppable damages to the environment. 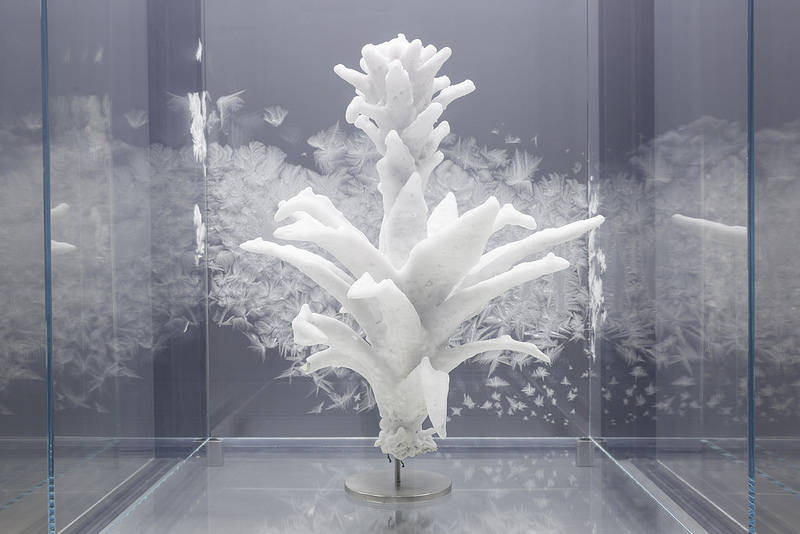 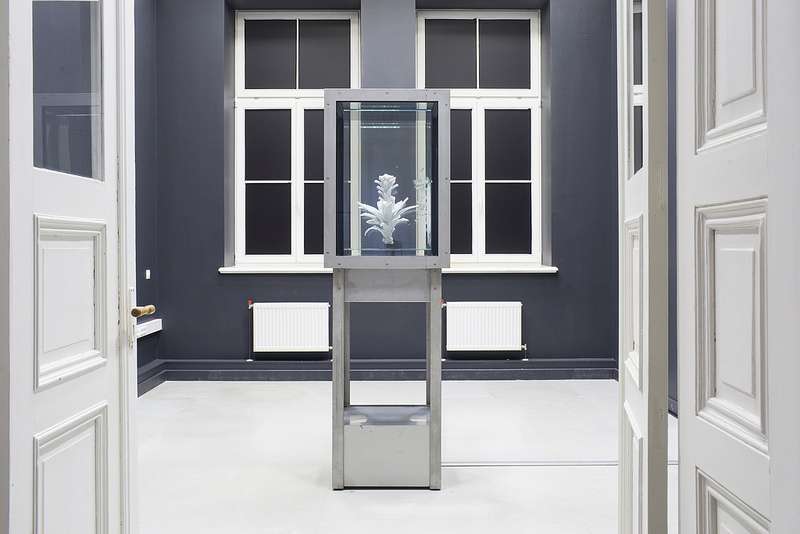 After the Triassic and the Jurassic came the Cretaceous period. Julian Charrière placed a plant known to have existed during the Cretaceous period inside a hermetically sealed, glass vitrine. The plant has been shock-frozen at –196˚ centigrade by being dipped in liquid nitrogen and then kept refrigerated at –20˚C. As long as this plant from 65 million years ago is kept in this artificial environment and cared for by humans, its appearance will be protected from the forces of entropy and decay, serving as a bridge between distant past and uncertain future. The “living fossil” hovers between life and death, distant past and future. Its fragility echoes our reliance on non-sustainable resources and our arrogant attempts to dominate the environment, at the cost of disturbing its natural order.

Jani Ruscica fleshed out the direct and unplanned effect of technology on other living species. His video Ring Tone (en plein air) depicts a digital recreation of a lyrebird. This Australian bird is famous for its capacity to render with great fidelity the songs of other birds but also noises made by animals such as koalas and dingoes. In fact, the lyrebird’s ability to imitate almost any sound, including man-made mechanical sounds, has made it quite popular on youtube.

Ruscica created a CGI animation that combines field recordings and special effects. In order to recreate the bird in CGI, the artist studied YouTube and nature documentary clips of lyrebirds. As with many bird species, the movements of the lyrebird can be quite robotic, somewhat unnatural almost, and the CGI, being a digital recreation of the species, only reinforces this feeling.

Oswaldo Maciá, The Opera of Cross-Pollination, 2018 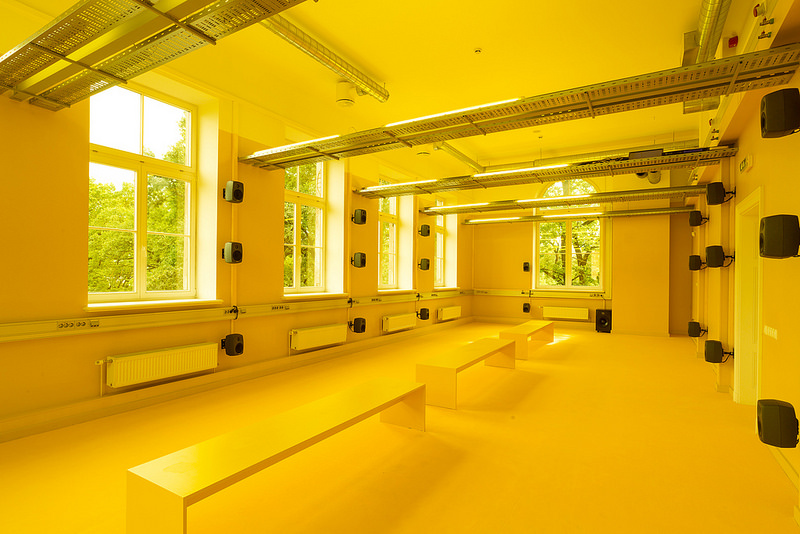 Oswaldo Maciá’s The Opera of Cross-pollination is an immersive installation that echoes Silent Spring, an environmental science book written by Rachel Carson in 1962 about the catastrophic environmental impact of pesticides.

The Opera of Cross-pollination bombards your senses with intense colour, subtle audio and defused aroma to remind us that the ecological drama unfolds in ways that often escape our senses.

Julian Rosefeldt, In the Land of Drought, 2016

Julian Rosefeldt, In the Land of Drought, 2016

The scenes in Julian Rosefeldt‘s In the Land of Drought feature scientists in white lab suits investigating the bleak remnants of civilization in an undefined, post-humanity future.

Shot using a drone in an abandoned film sets close to the Moroccan Atlas Mountains, the images give the viewer a feeling of alienation but at the same time, a sense of thrill, enigma and suspense. 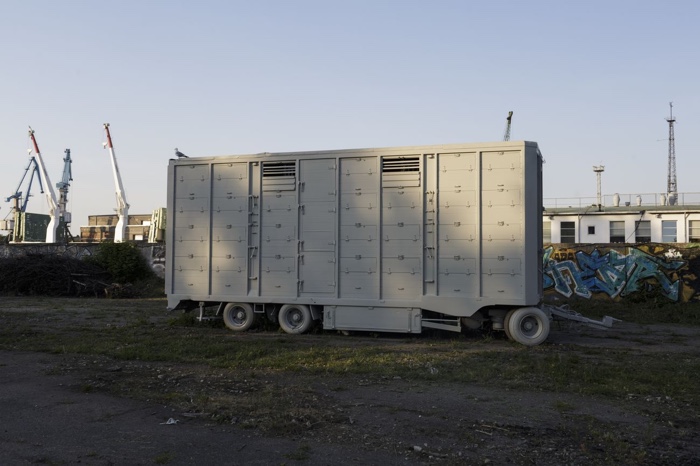 I didn’t see Jevgeni Zolotko‘s The Sacrifice but since we are so intent on treating sentient beings as disposable objects, i feel like i need to mention the work. The artist installed a gray trailer outside the Art center Zuzeum. The trailer, normally used for carrying livestock, evokes the ones in which Latvians were transported to Siberia during mass deportations under Stalin. Disturbing banging noises can be heard as you go near the trailer, but it is unclear whether animals or humans are trapped inside. The ambiguity evokes the cruelty with which humans treat anyone they regard as “Other”, whether this other is another animal species or human being who has different beliefs or ethnic background.

“I’m not going to make it. I’m a loser. Not good enough. I’m cold. Exhausted. Thirty-three years old, fucked by life.” These are the first words of Mindy, the protagonist in Sven Johne’s video A Sense of Warmth. Mindy, who remains unseen throughout the video, recounts her alleged escape from the digital working environment and her new life on a deserted island. A Sense of Warmth catapults the viewer into a paradise, a life without exploitation, war, ecological destruction; in short, a life without capitalism.