What does it mean to be an ecophile, a true lover of nature in an age when most of us struggle to even recognise nature? When landscapes are artificialised, when the distinction between natural and man-made catastrophes is increasingly blurred and when biotechnology designs living species to satisfy our capitalistic and aesthetic whims? How pristine does nature have to be in order to gain our respect? Does nature even exist?

The three Ecophilia exhibitions of the ongoing Meta.Morf 2022 biennale for art and technology in Trondheim present artists who critically investigate the surprising manifestations that our ecophilia -our deep desire to connect with nature- can take. Women giving birth to endangered mammals; an alphabet for birdsong acting as a bridge between human and bird languages; an extinct bird coming back to Earth; an installation comparing the reactions of humans and plants to live music; a restaurant that used the human body as a food source for other species, etc.

Here are some of my other favourite works from the Meta.Morf shows: 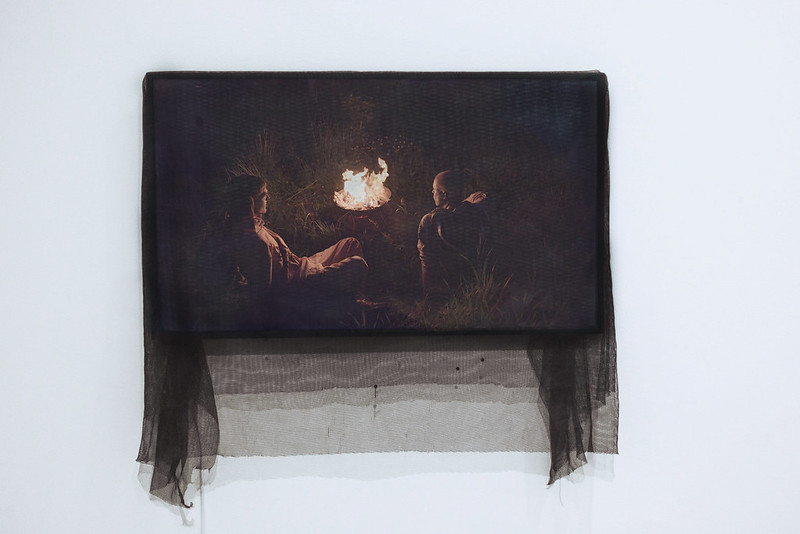 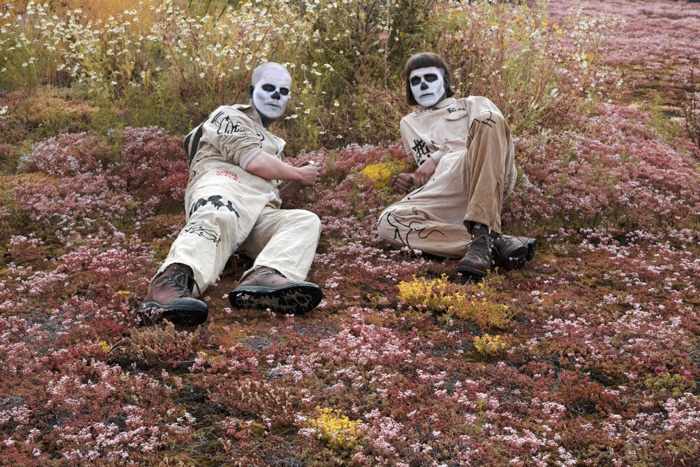 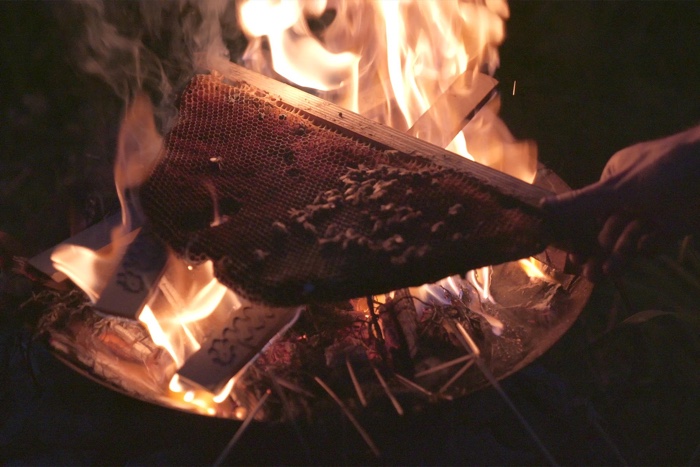 Starting with Marius Presterud who has been one of the best discoveries of the biennale for me. He had 3 works in the Ecophilia show.

In his artistic practice with Mikkel Dagestad at the Oslo Apiary & Aviary, Presterud attempts to reconfigure ecological activism. To him, most activism comes across as human-centred, reactionary and directed towards changing some external forces out in the world. Service, he believes, can be a serious contender to activism because service suggests a non-reactionary stance that includes itself in the immediate, situated, complex and emerging relationship in ecologies. It is about attempting to live with or within external concepts or forces in the world and not about changing them.

Presterud sees himself as a “dark ecological provider” who is working in the overlap between art, ecosystem exchange and doomsday prepping.

Goth Beekeeping, a video shown through a mourning veil, details the ceremonial burning of beekeeper equipment. The ritual happened in November 2019 when Oslo Apiary & Aviary learnt that the beeyard they had been running in downtown Oslo since 2014, was to be demolished because of the expansion of a city development project.

By ritualizing this moment of loss, the artists tell a story about grief, failures and other casualties that are seldom part of the discourse in societies built around future-oriented optimism and relentless growth.

The work also hints at the mourning for the disappearance of species and habitats pushed aside by the ever expanding human-built environments. 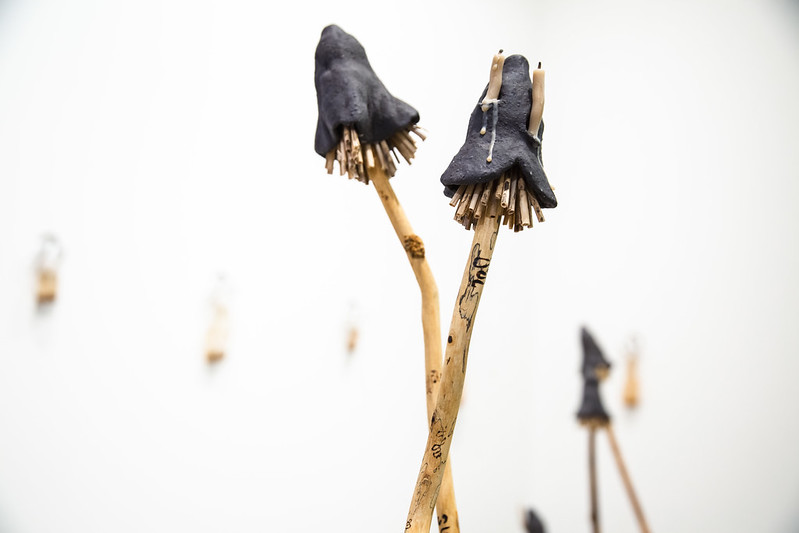 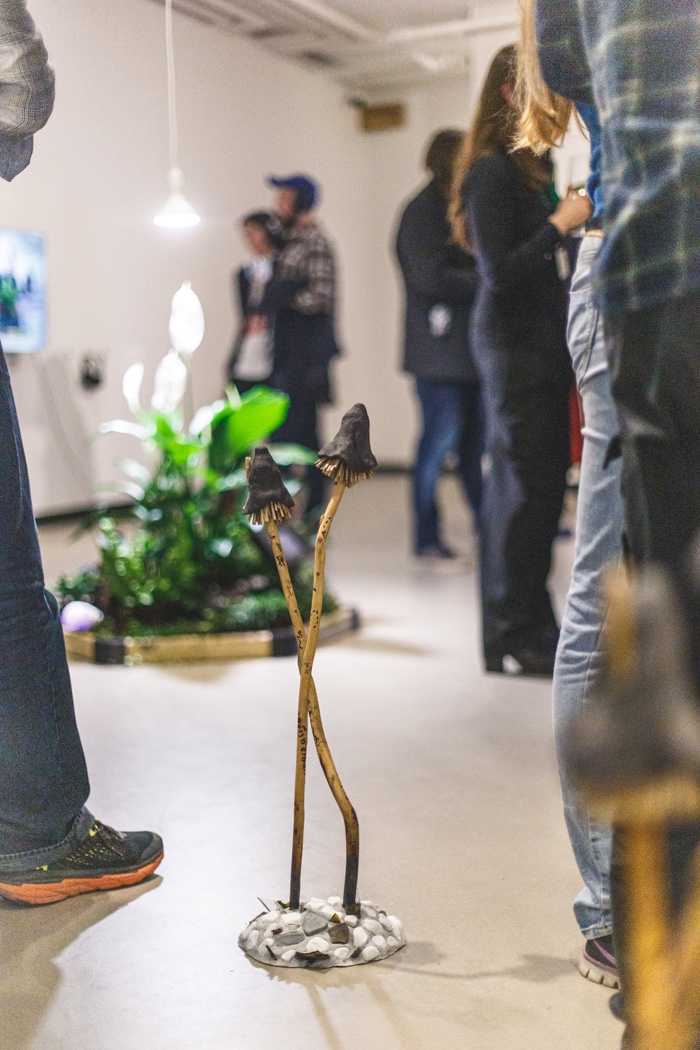 The primary participants/audience of Presterud’s Hibernaculum series are bees and moths. He created small resting places for moths and other insects that might enter the gallery space. Most of the materials used have been foraged from the city: wood, fine-grit cast concrete, landscaping stones as well as pieces of human hostile architectural elements like glass shards. The small constructions also use sand from the city beach, candles dipped using beeswax from the artists’ urban beeyard, chewing gum with pollen, etc.

By including both small wildlife, human craft and urban trash, the work challenges the divide between nature and culture but it also echoes practices that are oriented towards survival on a damaged planet and doomsday prepping, rather than techno-solutionism. 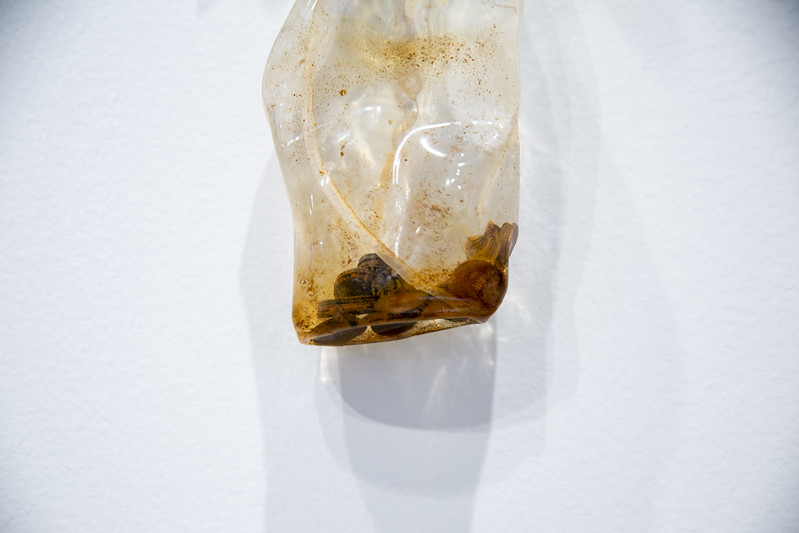 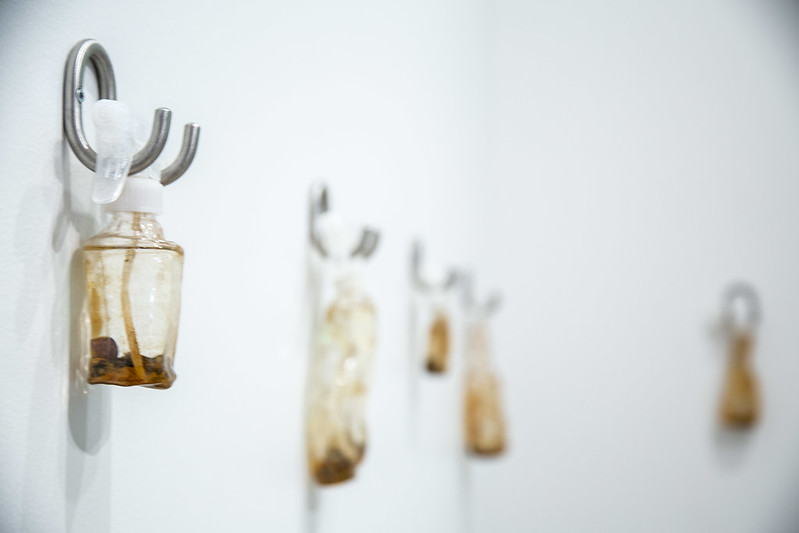 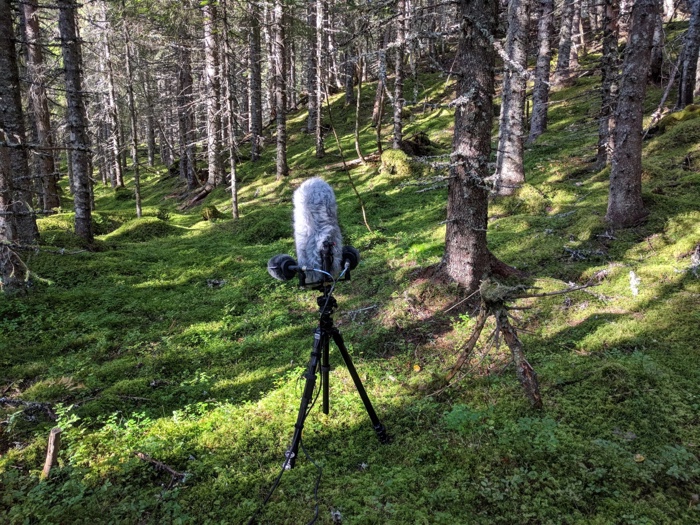 A rainforest once covered much of the west coast of Norway. Only scattered fragments of it remain today. Despite Norway’s claim that the nation is committed to protecting rainforests, despite threats to biodiversity and the importance of trees for carbon capture and storage, only 5 per cent of Norwegian forests are currently protected.

Frank Ekeberg’s Ingenmannsland (No Man’s Land) is an immersive sound installation based on field-recordings made in the old-growth forests that contributed to the Norwegian identity of closeness to nature.

When the exhibition opens and the installation is turned on, a deep soundscape of bird songs, insect noises, wind in trees and water streams fills the room. Over time, however, the sounds of wildlife quieten down, many even go extinct. As the hours in the exhibition pass, animals’ sound are reduced to a point where about 80 per cent of the sound material is gone. This number reflects the estimated percentage of wild mammals that have disappeared since the beginning of humanity, and also coincides with the percentage of the Norwegian rainforest that has been lost in the past 100 years. When a tipping point is reached, sounds progressively reappear, but they are more static and artificial, suggesting that we have entered another reality. The soundscape becomes a speculative environment based on future scenarios, and asks questions such as: What happens when forests disappear or when global warming dries them out? What place will artificial life occupy in the natural environment? 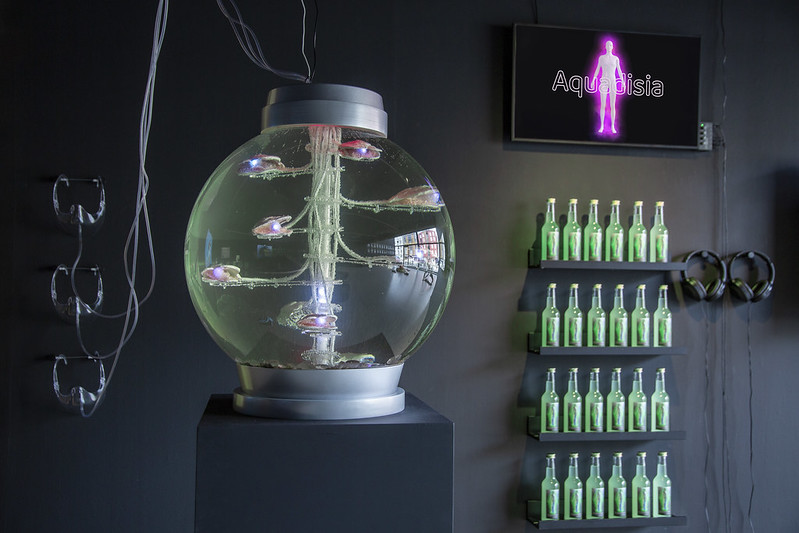 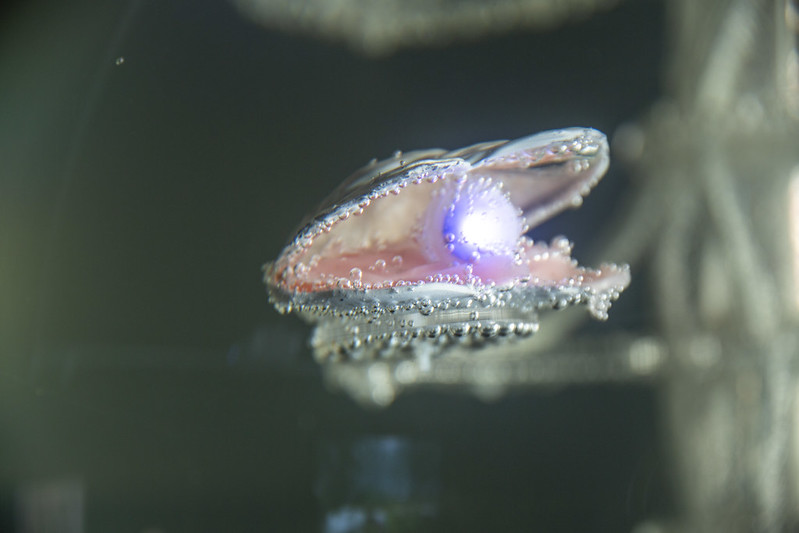 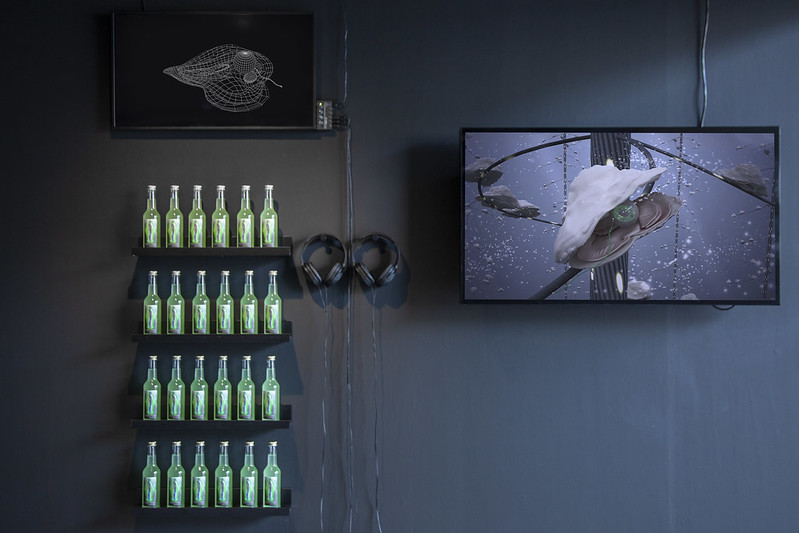 Oysters are nature’s powerhouses. One oyster can filter 150 litres of water each day. Oysters build sea walls that can potentially help protect coastal communities from rising sea levels. And the molluscs, some claim, are aphrodisiac.

Stephanie Rothenberg’s project Aquadisia suggests that by harnessing oysters’ main properties we could handle the ecological crisis in a way that is both efficient and pleasureful. The work speculates that, with the help of CRISPR technology, we could exploit the kind of elating energy that oysters provide and use it to bring about a more sensual interconnection with the cycle of life.
In this scenario, bioengineered oysters, cultivated in a futuristic aquaculture farm, would be able to convert toxic water into a transformative formula. The enhanced water, piped into public drinking water, would make humans more sentient, more attuned to the rest of the living world.

The project looks cheerful and straightforward but a closer look reveals a series of nuances and ambiguities: Aquadisia challenges techno-solutionism, the neoliberal concept of ecosystem services and the uncritical enthusiasm for aquaculture. 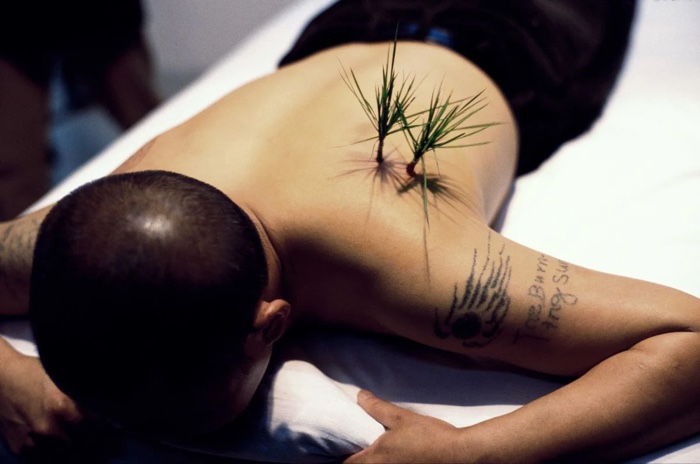 Over the course of his career, Yang Zhichao has had several technological and natural materials surgically implanted into his body. For Planting Grass, nurses sew creek grass into his shoulder without anaesthetic. While his body hadn’t rejected the technological objects inserted in his body during other performances, it developed an infection to the grass (a problem that Petr Štembera encountered back in 1975 when he grafted a plant on his arm.)

By laying bare the violence of nature, the performance invites us to interrogate our physical bonds with nature.

More images from the Ecophilia exhibitions: 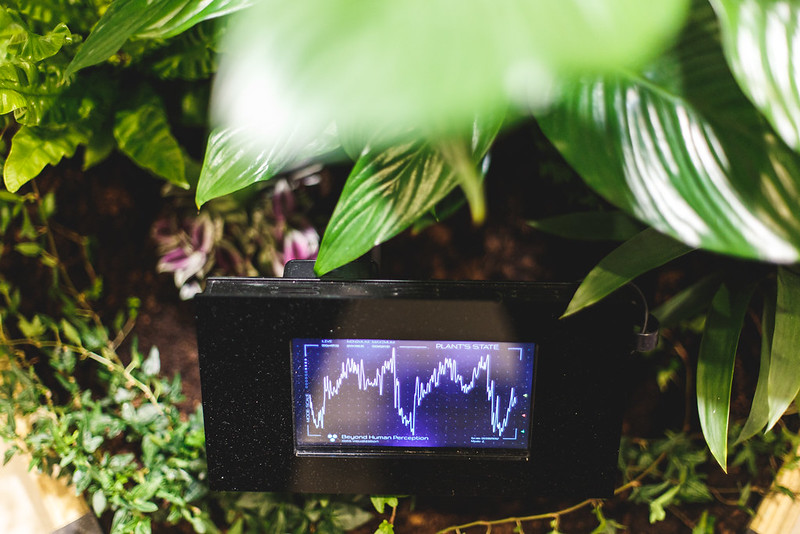 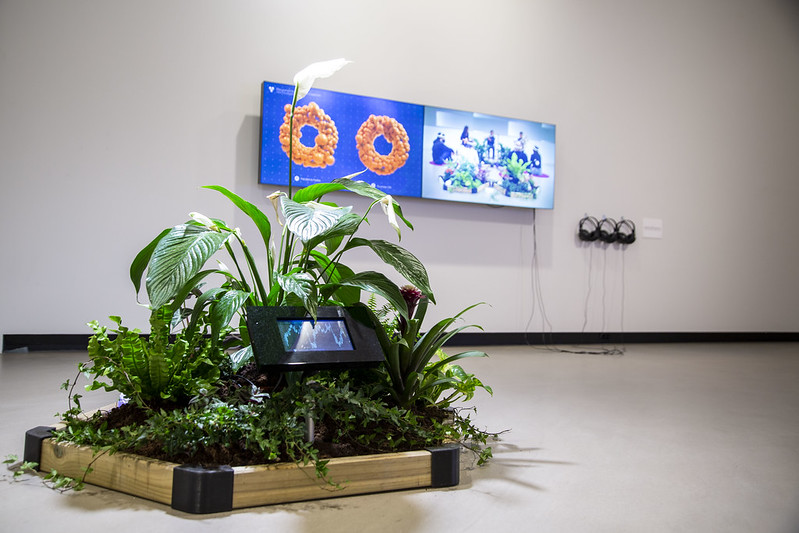 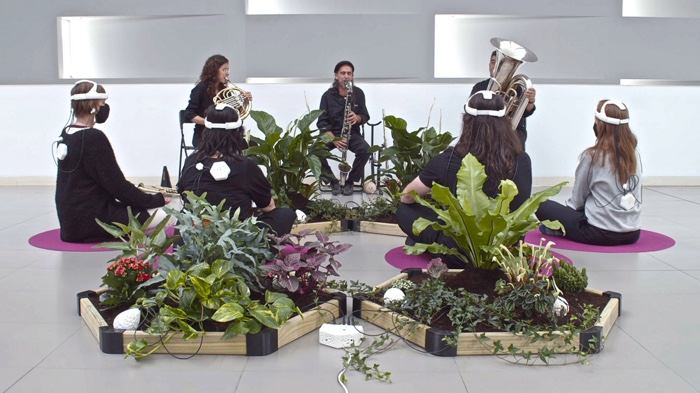 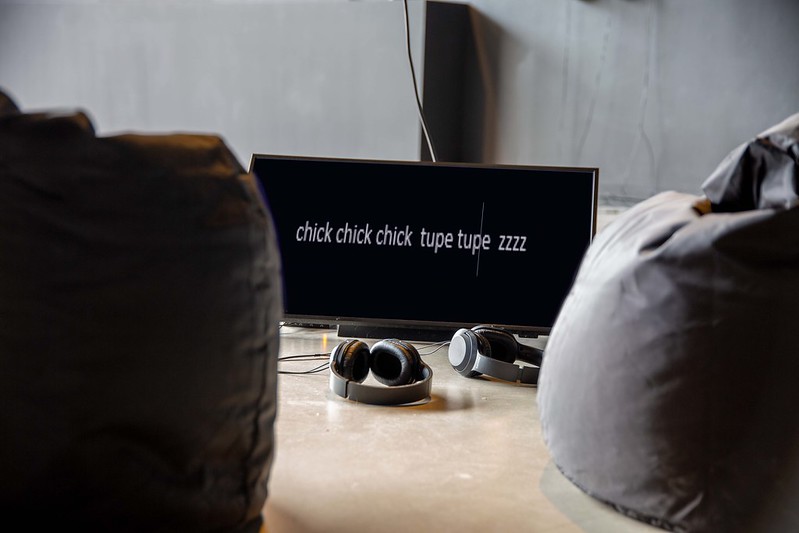 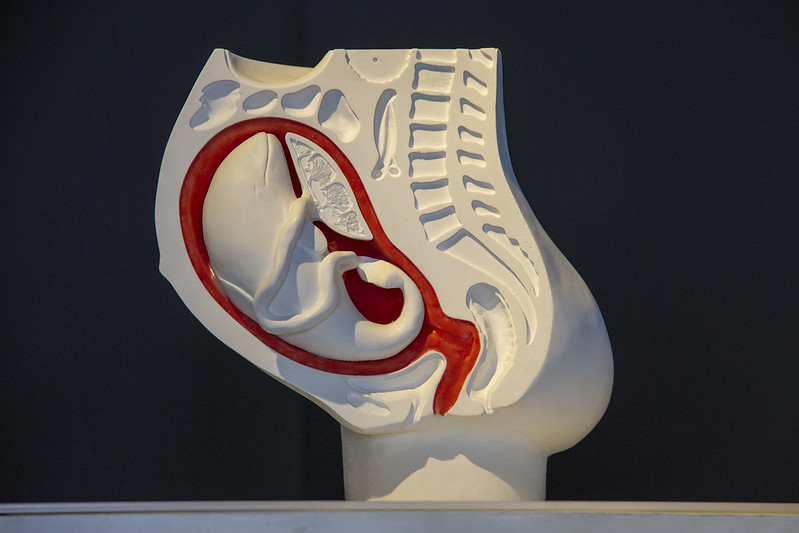 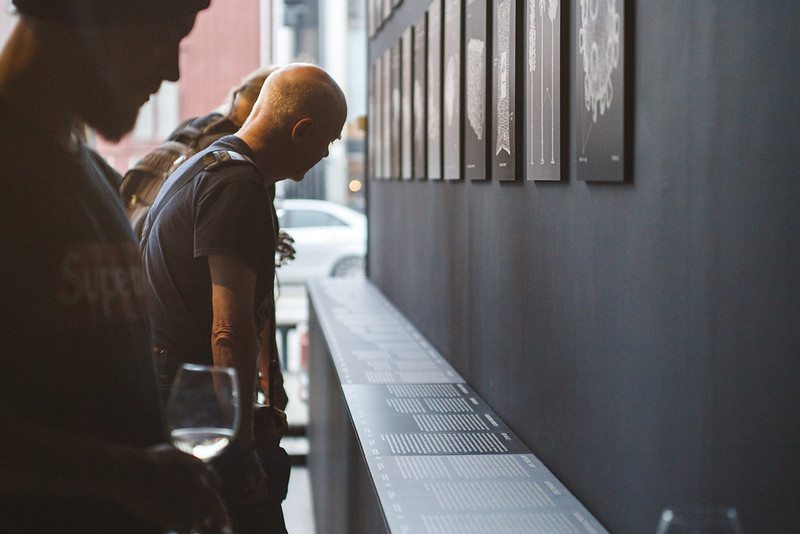 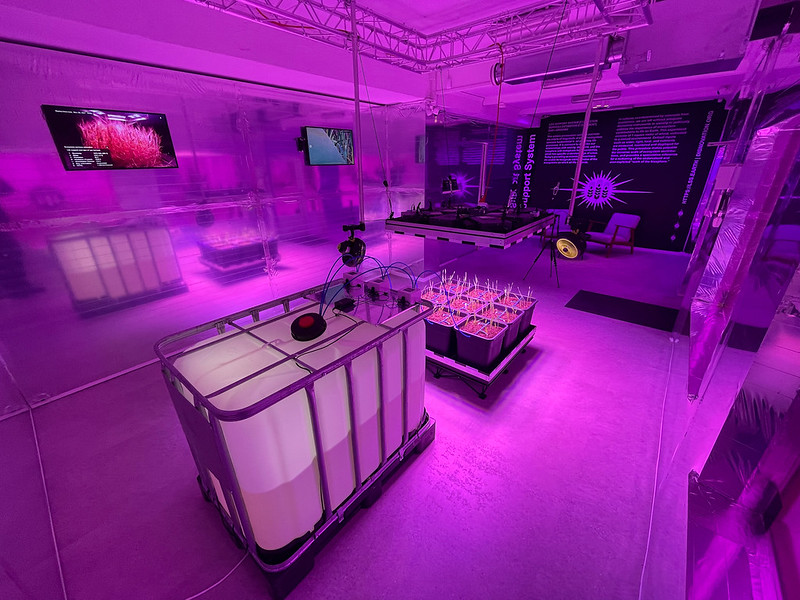 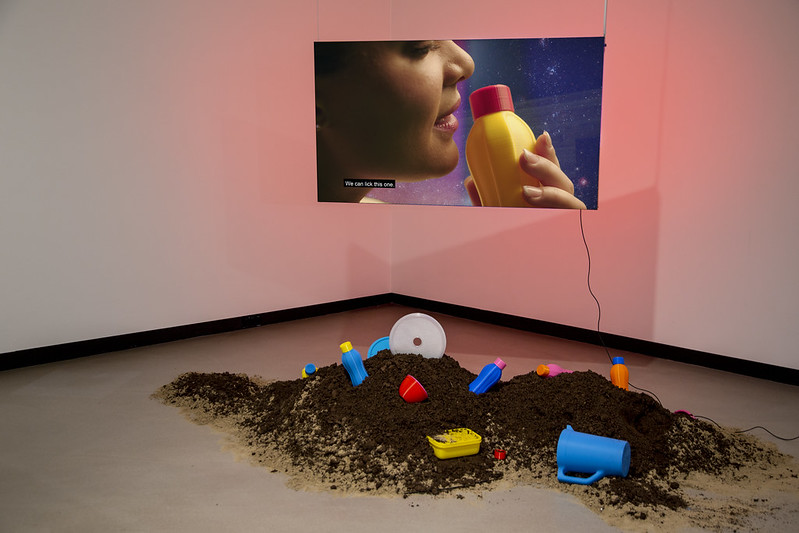 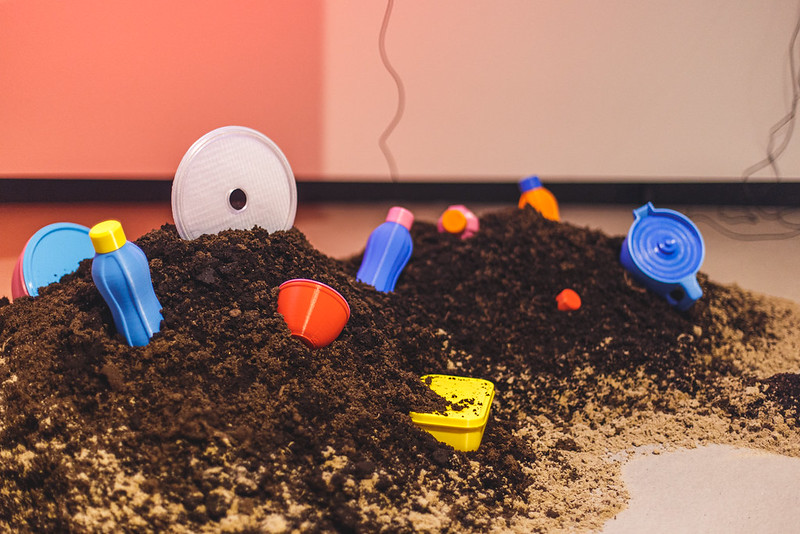 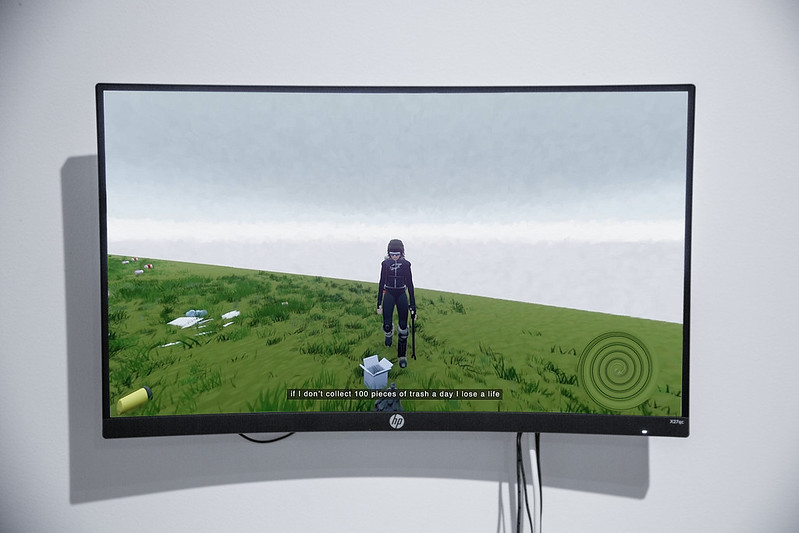 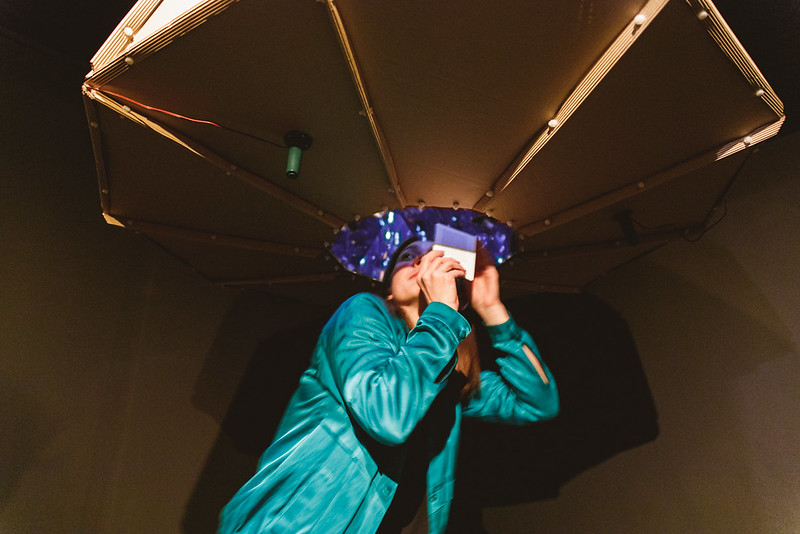 The Center for Genomic Gastronomy, To Flavour Our Tears. Photo Juliane Schütz

Also at Meta.Morph 2022: Tiny Mining. Extracting minerals from our own body and Embracing ticks and other disgusting creatures.
Related stories: Can technology bring back long-lost nature?; Weather Engines. The poetics, politics and technologies of the environment; Back Water: What should be classified as “wilderness” in a post-industrial world?; Survival of the fittest. Nature and high-tech in contemporary art; A Bestiary of the Anthropocene. Hybrid plants, animals, minerals, fungi and other specimens, etc.