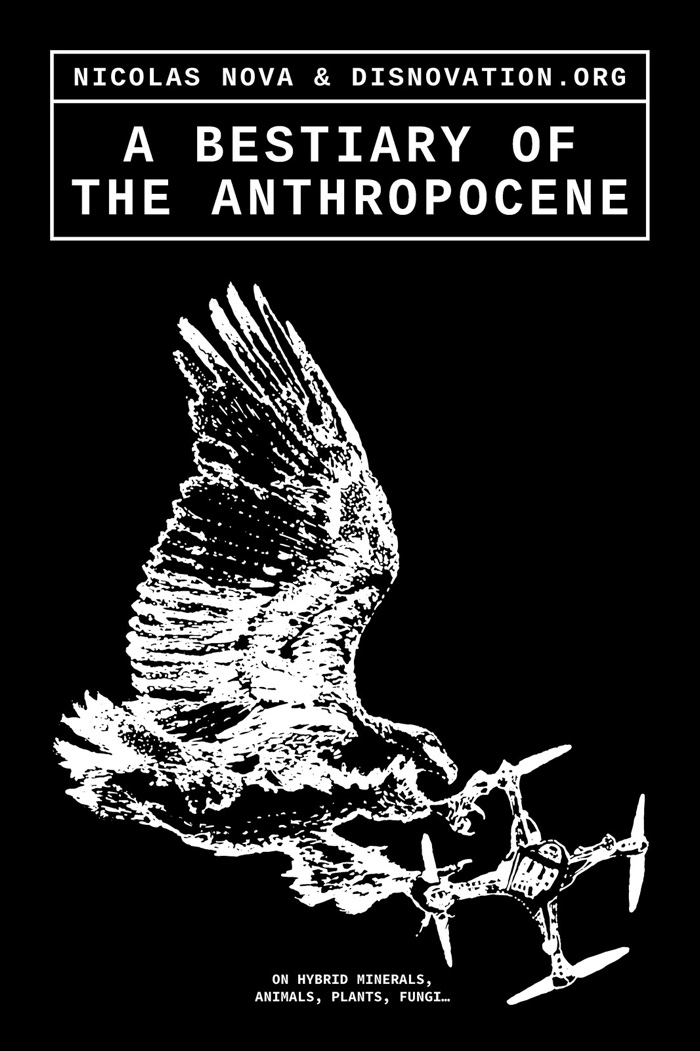 Equally inspired by medieval bestiaries and observations of our damaged planet, A Bestiary of the Anthropocene is a compilation of hybrid creatures of our time. Designed as a field handbook, it aims at helping us observe, navigate and orientate into the increasingly artificial fabric of the world.

The specimens of the Bestiary of the Anthropocene morph, hybridise, adapt to and adopt the new living conditions that we ruthlessly throw at them. In some cases, humans are in control of their appearance. Some of us took the conscious decision to engineer a genetically modified cyborg DragonflEye, for example. Others thought it would be highly convenient to have square watermelons, decapitated mountaintops and cannulated cow.

Most of the time, however, we can only register the unexpected results of the interactions between the technosphere and organic/mineral: the geese attacking drones, the birds’ nests made using cigarette butts and pieces of plastic trash or SARS-CoV-2 which emergence is directly linked to our destruction of natural ecosystems. It is interesting to see how some of these creatures of the Anthropocene are occasionally heralded in the media as our saviours: our techno-fetishism has done a lot of harm to ecosystems. Fortunately, some techno-enthusiasts write, more innovation or more living creatures transformed by innovation will solve any spot of bother and humanity will be allowed to breezily carry on as usual. Cue to the worms that digest polyethylene and the fungi growing in Chernobyl’s former nuclear power plant site which are now being used to help shield astronauts from radiation. 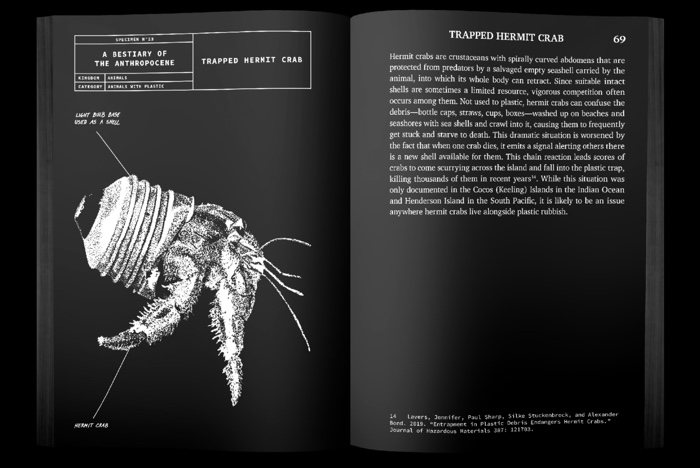 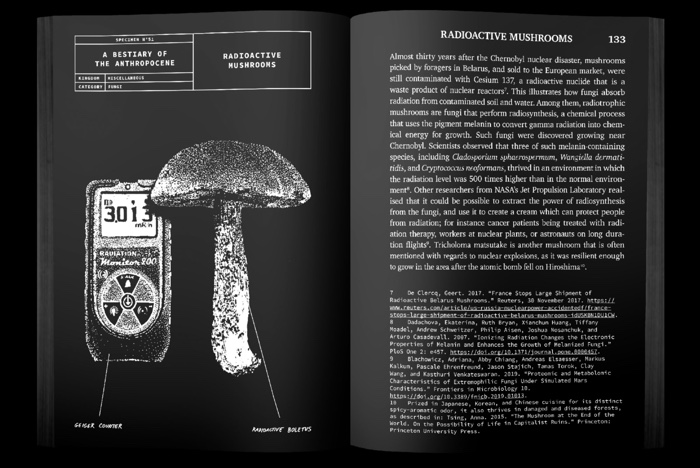 As the book demonstrates, animal, vegetal, mineral and all degrees of artificiality have long interacted with each other but our drive to innovate is speeding up the synergies and frictions: the biological becomes technological and technologically-altered and the result begins to feedback in the environment.

Get this book if you can. It’s engrossing, witty and packed with fascinating facts and ideas. The editors selected 60 cases that introduce the reader to some of the mongrels of our rapidly transforming post-natural era. They have also commissioned philosophers, geographers, groups of artists, anthropologists and other brilliant minds to contribute with essays that comment on the Anthropocene from various perspectives and delineate respectful ways to consider this hybrid menagerie. I’ll only mention a couple of the texts:

In his essay, historian Pierre-Olivier Dittmar draws parallels between medieval bestiaries and the Bestiary of the Anthropocene but while the former aimed to guide the Christian, the latter gives readers enough space to draw their own conclusions. Philosopher Matthieu Duperrex makes some pertinent observations about our (unhelpful, unproductive) tendency to think in terms of dualisms. Design theorist Benjamin Bratton connects the climate collapse and the AI-driven social collapse. Both, some claim, will hit us in the face in 2030. In On Negative Commons, philosopher Alexandre Monnin explores the legacy of the Anthropocene: a landscape made of dry soils, depleted rivers, toxic fields, rotting infrastructures and rotten business models. Anthropologist Anna L. Tsing writes about unintentional design and the life that continues (or even finds new opportunities to thrive) on human-disturbed landscapes.

The book closes with an interview -by DISNOVATION.ORG- of Professor of informatics Geoffrey Bowker who calls for the kind of long-term planning that is, sadly, incompatible with contemporary Western politics. This means thinking in terms of hundreds of years, not presidential terms and mandates. This also means planning both for what we already know is coming and fine-tuning our ears to identify the crises that are emerging very slowly. 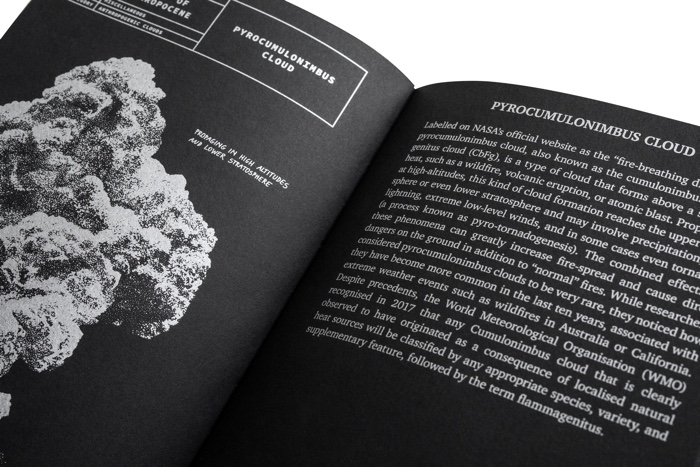 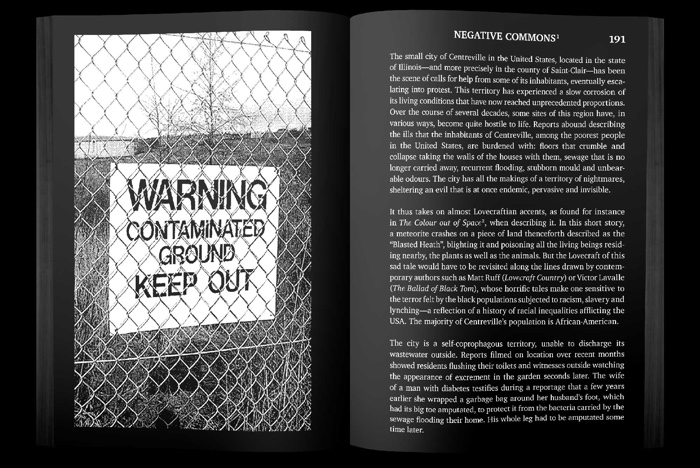 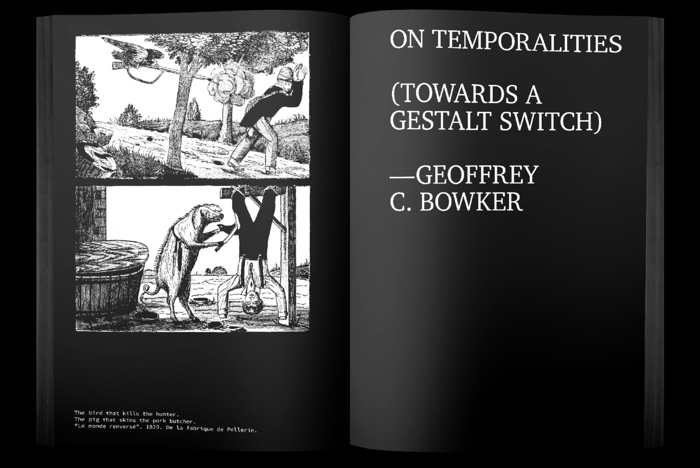 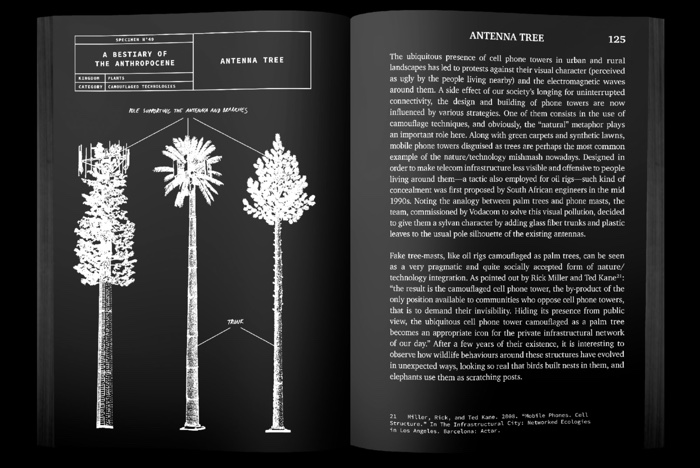 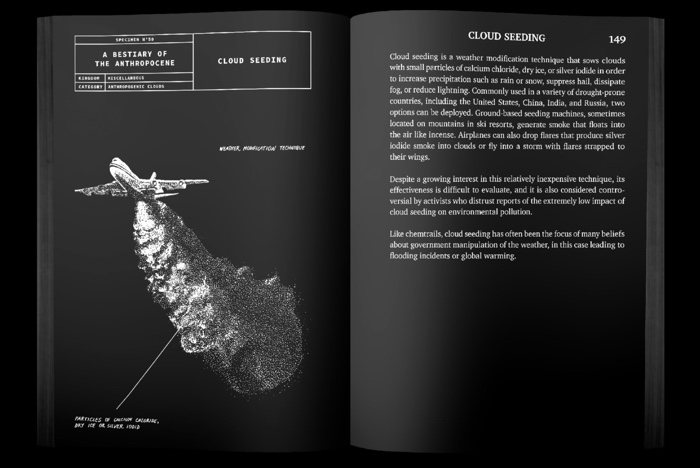