For a full intro to the festival, check out my previous story: GAMERZ: Digital tech ‘degenerated’ by craft and kludge. 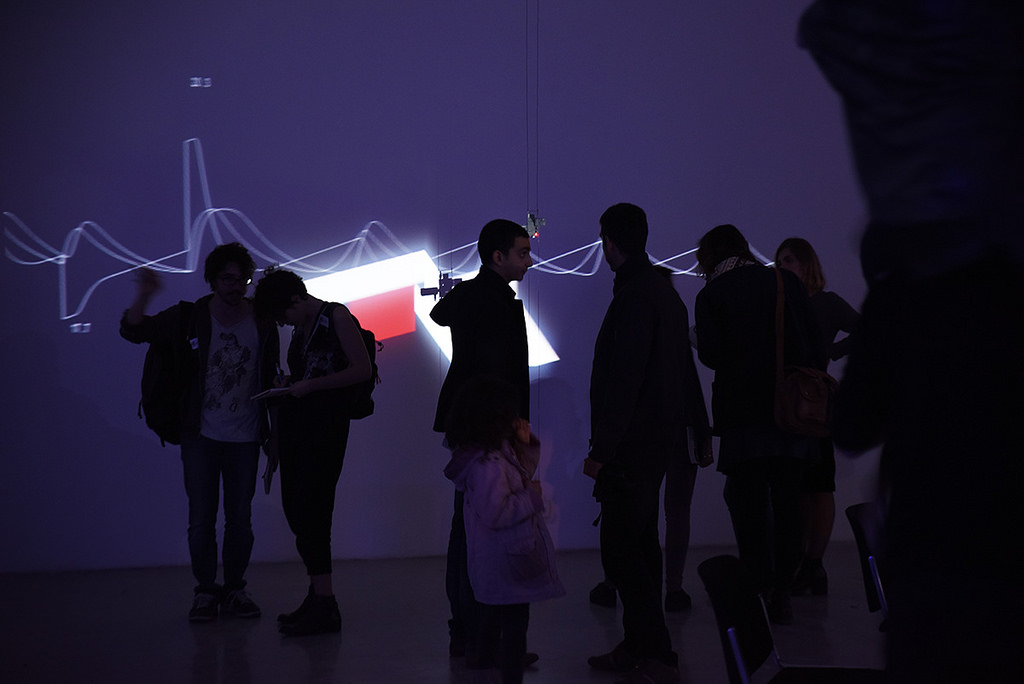 This year, a section of the exhibition of the GAMERZ festival was dedicated to the omnipresence of algorithms in our life. It was curated by artist, writer and otherwise brilliant cultural agitator Ewen Chardronnet.

By anchoring his curatorial text in the year 1972, Chardronnet reminds us that back then, the future of technology was not paved with malignant machines and other existential risks. Instead, it was brimming with hopes, ideals and thrilling speculations. In 1972 thus, Nixon orders the development of a Space Shuttle program, the first man-made satellite leaves the solar system, a man walks for the last time on the moon and his crew photographed one of the most reproduced images in human history: The Blue Marble portrait of the Earth.

1972 is also the year the cybernetic system Cybersyn and NASDAQ, the world’s first electronic stock market, were starting to show their potential. NASDAQ was only one year old but would rapidly become the fastest-growing stock market. As for the socialism-imbued promises held by Cybersyn, they were cut short by the coup d’état led by Augusto Pinochet (and backed by the U.S.) in 1973.

Philip K. Dick declares that we Live in “a computer-programmed reality”

As the curator also recalls, a few years later Philip K. Dick would explain with determination (and a certain sentiment that the audience is not ready to believe his words) that we are living in a computer-programmed reality. And indeed, nowadays, many scientists would argue that the science fiction writer’s declaration should not be taken lightly and that a being whose intelligence is far greater than our own might very well have created us for their own entertainment. In other words, chances are that we are indeed living in a computerized simulation.

What is sure is that artificial manipulations and decisions of all kinds have very physical and real impacts on our culture.

“Nowadays, algorithms are everywhere,” writes Chardronnet. “They organize the planning and optimal use of resources, pictures rendering, bio-computerizing, cryptography, stock exchanges, electronic surveillance, target marketing, our behavior on social media… But algorithms are as old as Babylon. If procedural generation video games universes are truly infinite, is there still any enchanted gardens full of immaterial mathematical relics to be found? Or will it be time to encompass the possibility of an end?“

The title for Chardronnet’s exhibition is thus, very fittingly, Simulated Universe. The show featured artists whose works filter through the hype and anxiety surrounding a world controlled by an artificial and often invisible intelligence.

Painted by Numbers provides an excellent introduction to the theme of the exhibition. Konrad Becker and Felix Stalder interviewed artists, scientists, activists, artists and experts in technology about their own perspectives on the power of algorithmic realities. The interviews were then segmented and rebuilt into short thematic videos that explore a particular issue (politics, culture, agency, etc.) under different but complementary points of view. The people interviewed talk about the perceived rationality of algorithms, weigh in on the possibility to build algorithms that would better reflect our values, discuss their lack of transparency, the subtle ways in which they are already shaping our cognitive processes, and often secretly scoring of members of society.

The videos are also available for watching online. I would highly recommend that you have a look at them if you have an hour (or 6 times 10 minutes) to spend on short films that efficiently open up all sorts of questions and provocations around the world built on data.
Extra bonus points to the authors of the videos for including women’s perspective (still not something that we should take for granted, alas!)

Important decisions are more and more devolved to machines and programs, making it difficult to determine who (or what) is actually in control. The trend is particularly noticeable in finance where an increasingly high number of stock trades are now driven by algorithms. 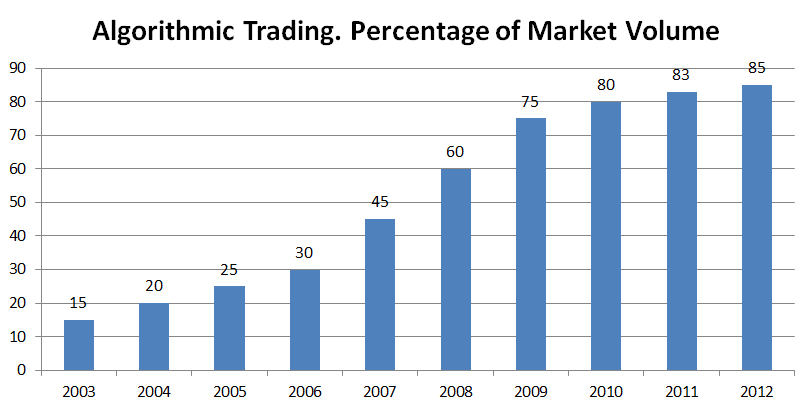 Many types of algorithmic or automated trading activities can be described as high-frequency trading (HFT), a type of algorithmic trading characterized by such high speeds, such high turnover rates and high order-to-trade ratios that no man would ever dream of comparing to its. Algo trading been the subject of much debate since one of them caused the 2010 Flash Crash which saw nearly $1 trillion of value erased from U.S. stocks and the Dow Jones index lose almost 9% of its value in a matter of minutes. The market rapidly regained its composure and eventually closed 3% lower.

RYBN.ORG is a group of French artists who have been studying algorithmic finance for a number of years but who also created their own trading robot. Using an artificial intelligence algorithm, the autonomous program has been investing and speculating on financial markets since 2011. More recently, the group has invited other artists to join their research platform ADM XI and experiment with counter-intuitive strategies of investment and speculation.

The trading algorithms hosted on the platform follow their own non-mercantile and obsessive logic: some attempt to produce a total and irreversible chaos, others try to influence the market prices to make it look like a given geometrical shape, while others attempt to saturate the market with non-human affects.

Within this contest, benefits are no longer driven by the prices and other economic instruments, but rather, by living organisms – soil, plants, bacteria; by supraterrestrial rules – environmental, astronomical, astrological; or by non-scientific knowledge – esoteric, magic, geomancy, etc.

Suzanne Treister‘s Quantum V algorithm is guided by data from human brains under the influence of psychoactve plants and planetary networks. Horia Cosmin Samoila‘s work submits selected stocks and financial products to an algorithm governed by the Global Consciousness Project, a Princeton University parapsychology experiment that looks for interactions between “global consciousness” and physical systems. Marc Swynghedauw’s HeidiX buys or sells stock according to how likely her actions with help her (she’s a lady bot!) reach the summit of famous mountains. Nicolas Montgermont‘s HADES trading algorithm uses its knowledge in astronomy, astrology and mythology to sell or buy gold. You can find more algorithms on the platform, the logic behind each of them is frankly quite baffling but some of them seem to perform rather well.

Una historia nunca contada desde abajo (A Story Never Told from Below) is inspired by the Cybersyn or Synco project. The project kicked off in mid-1971, when cybernetic visionary Stafford Beer was approached by a high-ranking member of the newly elected socialist government of Salvador Allende. The scientist was asked if he could apply his cybernetic theories to the management of the public sector of the Chilean economy. The objective of Cybersyn was to use a system of networked telex machines and computers to transmit data from factories to the government, allowing for economic planning in real time. The project was dropped after Pinochet’s 1971 coup.

Regina de Miguel’s film lasts roughly 2 hours and i didn’t get a chance to watch it properly, alas! From what i’ve seen and also gathered from various readings and discussions, it seems that the work looks at times (which might now be regarded as ‘utopian’) when scientists and politicians embraced technology with enthusiasm in the hope that they would genuinely help them govern and improve humanity. However, utopias, even the most revolutionary ones, tend to be betrayed by the systematic failures of the times when they were conceived. 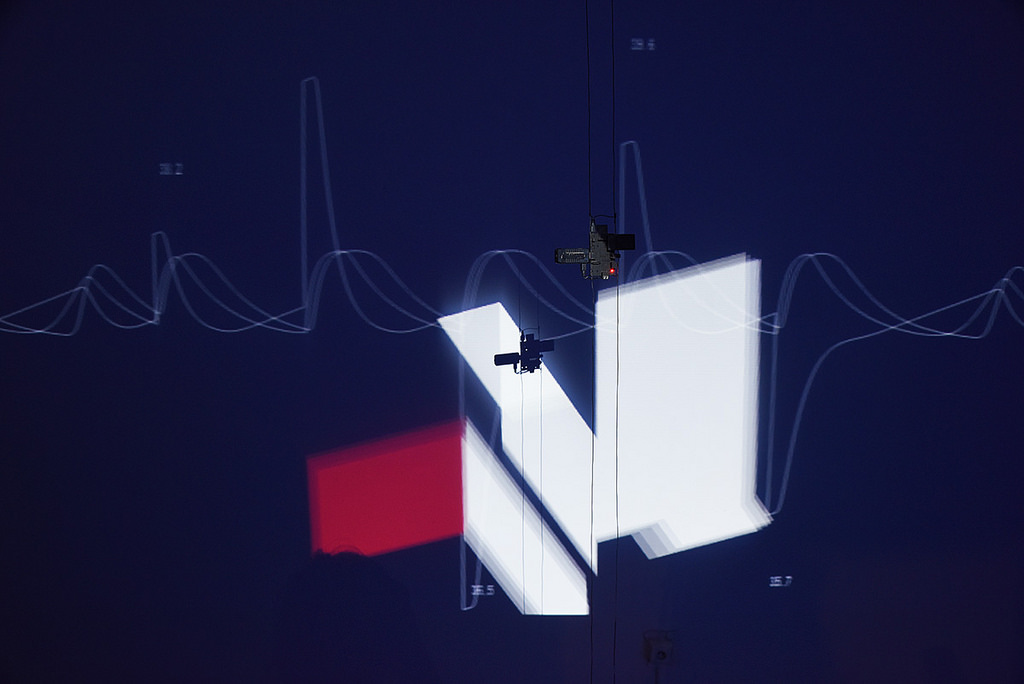 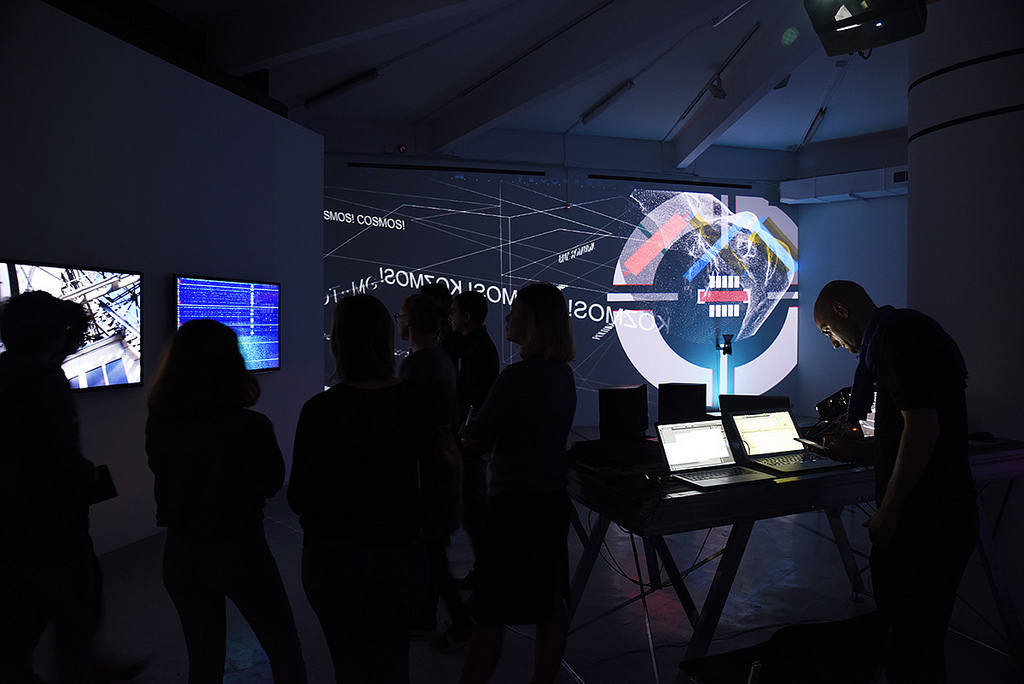 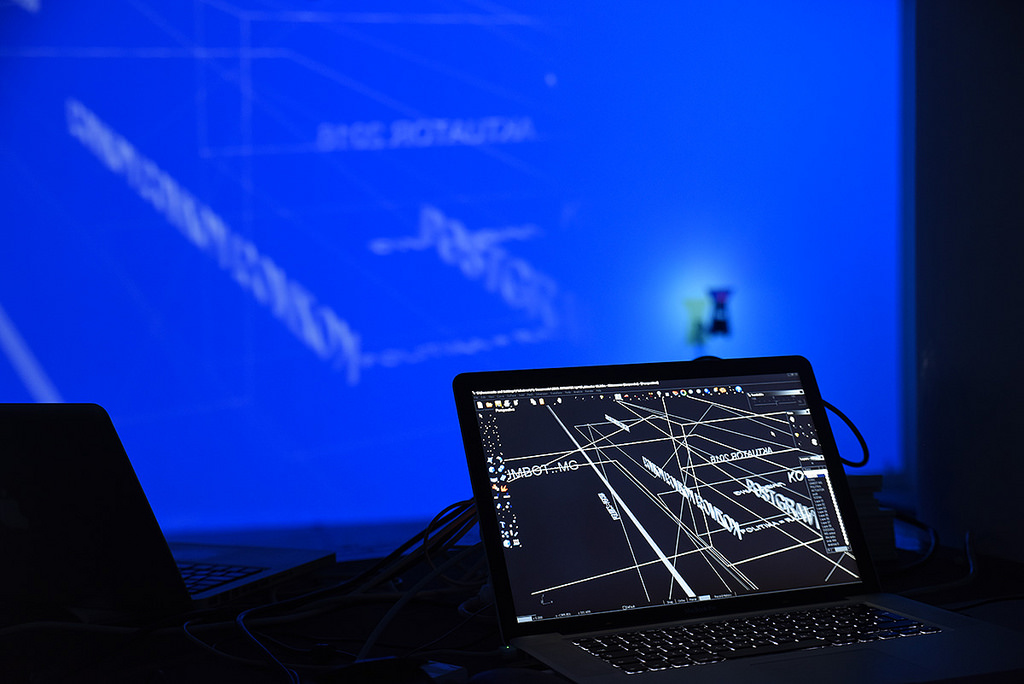 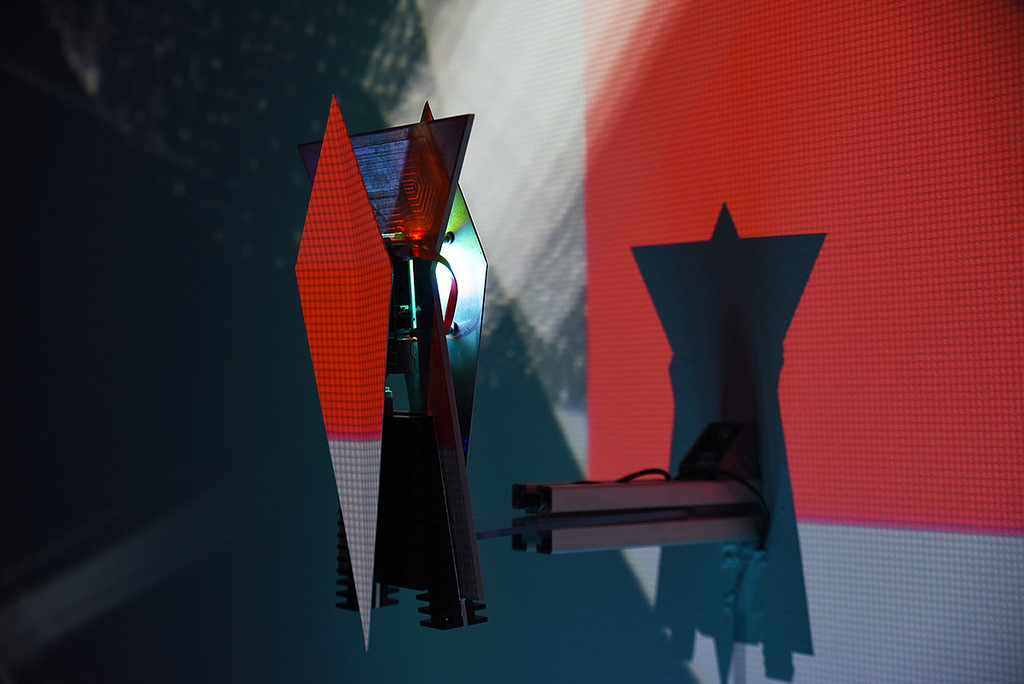 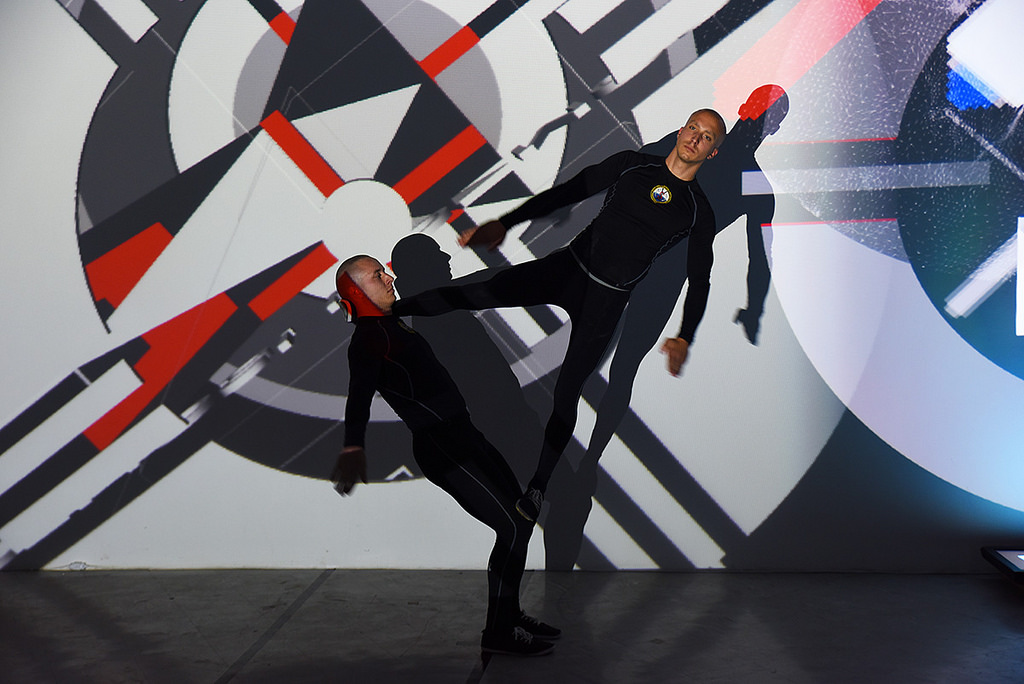 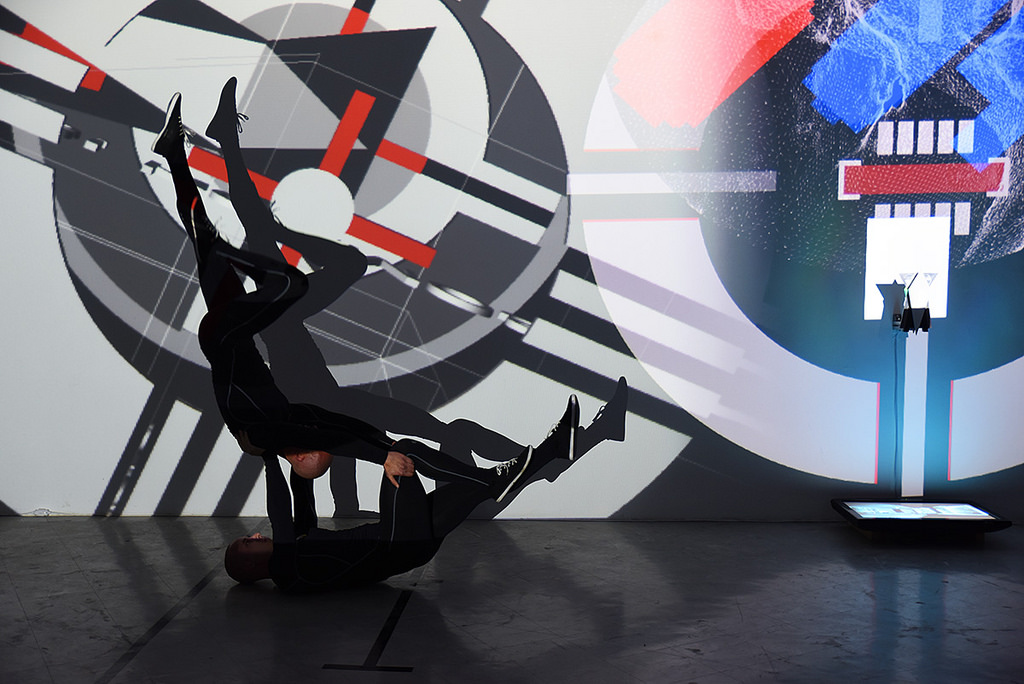 Špela Petrič, Miha Turšič, Dunja Zupančič and Dragan Živadinov believe that the research in arts and humanities should be recognized as development practices complementary to space science and technology. The installation and performance they presented at GAMERZ are part of a broader call to integrate art forms into space programmes.

Živadinov was a co-founder of the avant-garde art collective Neue Slowenische Kunst and the director of the first complete theatre production in zero gravity conditions. In 1995 Živadinov embarked on Noordung 1995-2045, a 50-year theatrical process named after the famous Slovene rocket engineer and pioneer of cosmonautics.

The Noordung 1995-2045 theatre piece is to be repeated on the same day, every ten years, until 2045. Should any of the actors die during this 50 year period (as it happened already with actress Milena Grm), their role will be symbolized on stage by a remote controlled sign that the individual had previously selected. As for their text, it will be replaced by a melody for women and rhythm for men. Since it is highly likely that all actors will have passed away by 2045, all that will remain on the stage for the last performance will be their technological substitutes. Each of these devices will then be sent in the Earth’s orbit from where they will transmit signals back to Earth and also into deep space. 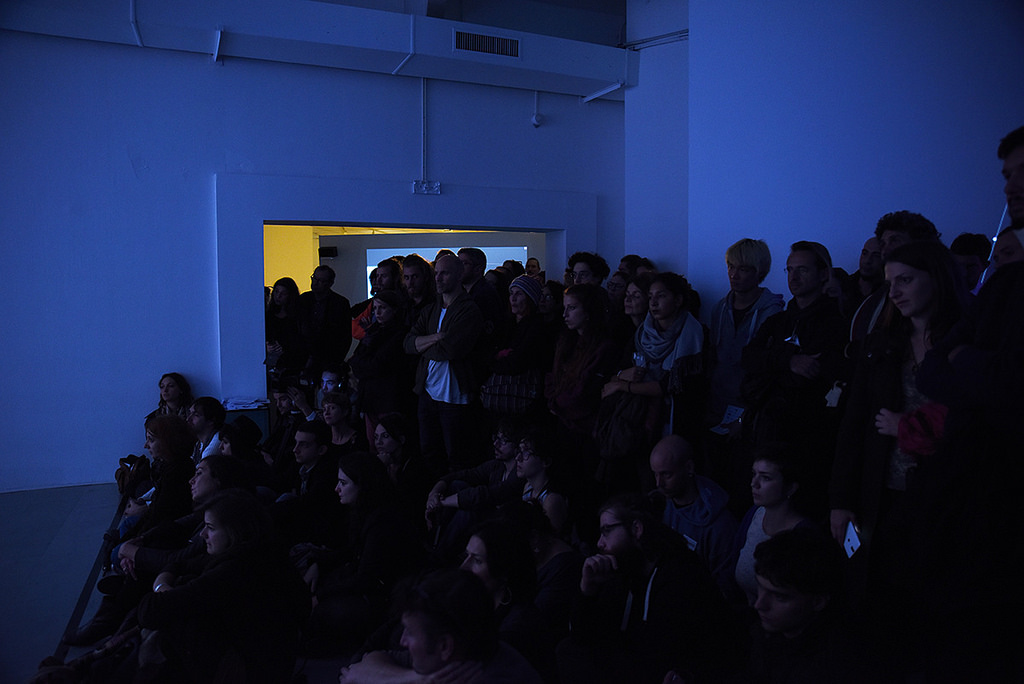