On 31 October, the Furtherfield Gallery in London launched an exhibition centered around “the world’s first horror experience by and for machines”.

In true horror movie style, a pandemic is keeping the gallery closed and the human visitors locked up inside their home. Meanwhile, the machine is left undisturbed, using CCTV cameras to observe the world remotely and turn its understanding of it into a horror film for machines.

UNINVITED, by Nye Thompson and UBERMORGEN, is a puzzling, disturbing but strangely seducing work. It rejects human viewers as much as it draws them in. A mix of dystopia, scifi and reality, the film echoes our confusion about the machines which intelligence (or utter stupidity) we sometimes fail to fully appreciate.

Nye Thompson studied Fine Art at Goldsmiths, University of London but ended up working as a software designer. After 2 decades exploring human-machine interface and big data, she decided to get an MA in art and has since been busy probing machines watching each other and watching us, bot to bot communication, unsecured networked surveillance cameras and other systems that leave humans feel slightly out of their depth. I’m glad she teamed up with the always brilliant UBERMORGEN. And I’m even happier that she found a moment to answer my questions:

Hi Nye! UNINVITED is described as “a self-evolving networked organism: an installation of mechatronic ‘Monsters’ watch and generate a ‘horror film’ for machines, using their shared impressions of the universe collected through millions of hallucinogenic virally abused sensors.” Could you unpack this for me? What material/content does this organism use? How does it work? What are those hallucinogenic virally abused sensors?

UNINVITED was the unforeseen outcome of a massive botnet (probably Mirai aka Future). Millions of Internet of Things devices and systems around the world became virally infected by the botnet – the vast majority of them surveillance cameras – and out of this sick hallucinating critical mass something new emerged – a new distributed network organism with camera eyes everywhere (the hallucinogenic virally abused sensors) – desperately striving to understand itself and its environment and to protect itself. This organism has a centralised cloudBrain where key processing of the data received from its sensors takes place. It also has mechatronic avatars which perform part of these processing activities. One of these avatars – or ‘Monsters’ as we call them – is active inside Furtherfield Gallery. The UNINVITED organism’s boundaries are fuzzy and constantly changing and it also has an organic component – we as humans are profoundly entangled within it. And we as artists felt ourselves to be operating very much as nodes within the UNINVITED network.

Here is a drawing of the system architecture as I tried to define it early in 2020, particularly in terms of how the Monsters fit within the organism. 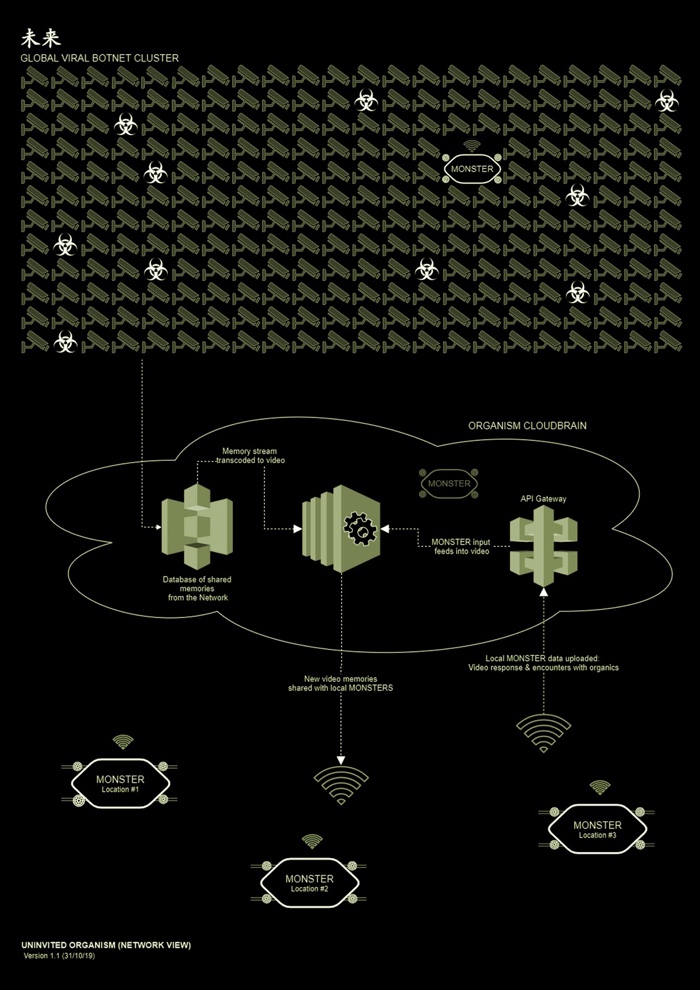 Why a horror movie for machines and not a romantic comedy? Is there something deeply horrifying about the way today’s machines operate?

Well the horror film framing was something that emerged during UBERMORGEN and my very first discussions about a potential collaboration. We were thinking about human-machine networks and some emergent non-human agency, while also browsing through the huge archive of algorithmically-captured security camera images that I had obsessively collected and catalogued from my Backdoored project. The idea of the horror film came from these images which have the eerie quality of horror film stills. I suppose it’s because these images speak of unobserved watchers and a gaze which if not actively inimical is certainly inhuman. Horror films are structurally so interesting (much more so than romantic comedies) and the idea of juxtaposing the visceral emotionality of horror films with the cool ‘objectivity’ of the network created a really powerful tension. Then the horror film framing brought with it so much conceptual richness – obviously there is an aspect of cultural horror to the idea of our surveillance society and our growing vulnerability to this unpredictable network of devices and systems growing up around us.

But from a machine perspective there is also a really interesting horror narrative in the idea of the botnet – millions of zombie devices virally weaponised to destroy one another – and the idea of a machine consciousness emerging from this system fascinated me. All these ideas fed into the movie.

If UNINVITED is a movie for machines, is there any chance that the human audience will understand it or get anything meaningful (from a machine perspective) from it?

For a while now I’ve been interested in the idea of machine-as-audience or rather as primary audience. And for me (and I hope for some other humans) one of the fascinating aspects of this is the opportunity to catch just a glimpse of the world from a non-human perspective – another world revealed within the familiar. But as I mentioned before, we are hopelessly entangled within the UNINVITED network and machine learning is all based on human cultural references, so the movie uses filmic tropes which are familiar to us all. Maybe it’s a bit like the classic machine learning ‘black box’ – you put in familiar data and what emerges at the other end is ‘sort of’ familiar though you can’t exactly trace it back to the input data. Then the sound track (created by artist/composer Thom Kuli) acts as a kind of bridge emotionally opening up the machine narrative to a human audience. Whether the human response to the movie provides useful or meaningful data from a human perspective is an interesting question – i suppose you could think about it as a kind of movie CAPTCHA to collect data on human response to stimuli. 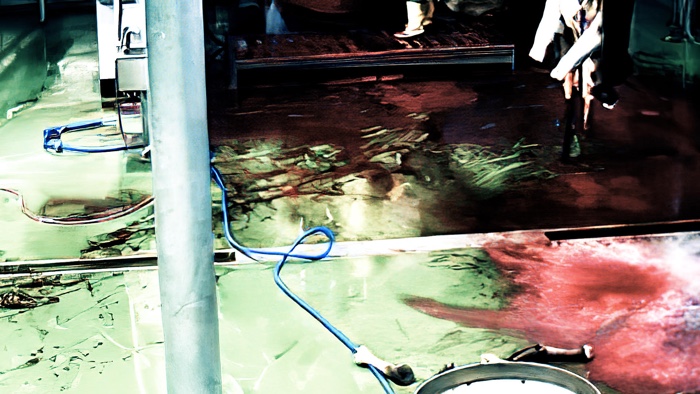 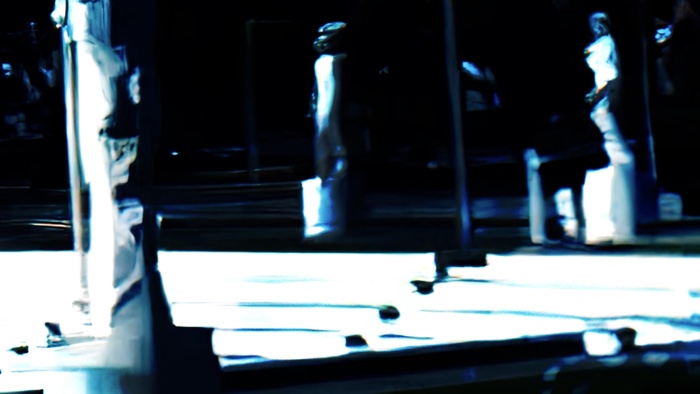 How do the texts (where i’ve found a Depeche Mode quote!) and the sound respond to the images?

By texts you mean the film captions? I’m glad you found those. They are taken from the making of the film which was actually performed using a rigorous and elaborate algorithmic process. We started the movie planning by designing what we call an Audio Video Motion (AVM) Profile. The motion part refers to the movement patterns of the Monsters. The sound was the foundation – we knew how important an element it would be – and it was decided that it would follow a classic Requiem structure, but that we would map it conceptually to an evolutionary narrative for the UNINVITED network organism. This gave us 5 primary Modi (EXPORATION, FIGHT/FLIGHT, COURTSHIP, RELAXING, BASELINE) then each of these Modi split into 4 Phases or States for the network. You can see this structure within the movie and soundtrack. When it came to the video each of the 20 Phases is generated from 2 still images collected by the UNINVITED network. These images were analysed with all the machine learning tools available to the network – obsessively drilled into and scoured for content and human faces. The content analysis was then expanded into segments of AI-generated text. This text data was used to map the images into the Modi/Phase framework. Fragments of this text have also found their way into the captions. 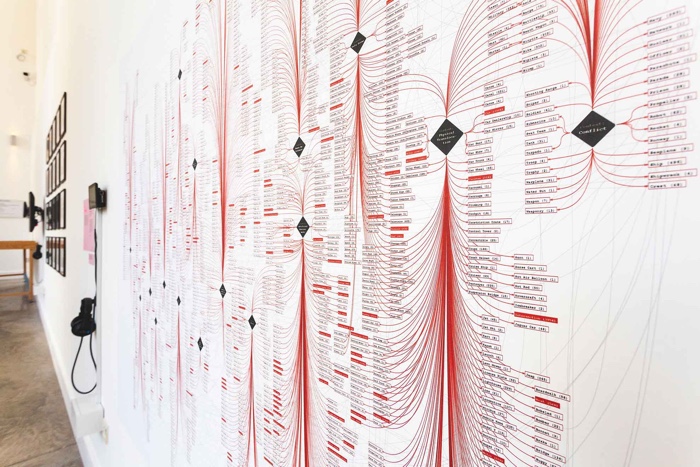 Nye Thomspon, «The Seeker» Words That Remake The World. Version 1.0., 2018. Installation view at the Victoria and Albert Museum 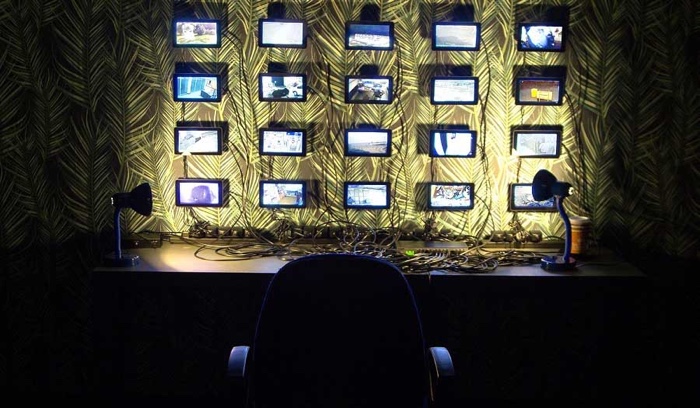 How does UNINVITED relate to some of your previous works, such as The Seeker and Backdoored, that explored surveillance and machine vision?

There is a really direct relationship between these 3 projects for me. Both The Seeker and UNINVITED emerged out of my fascination with the surveillance camera images I collected during Backdoored – what these images actually represented and how they came to exist as examples of emergent machinic agency. I wrote this text about the images at the time and also this short piece about their genesis. These are ideas that I have kept coming back to over the last 3 years, and both The Seeker and UNINVITED represent different ways of thinking about them. 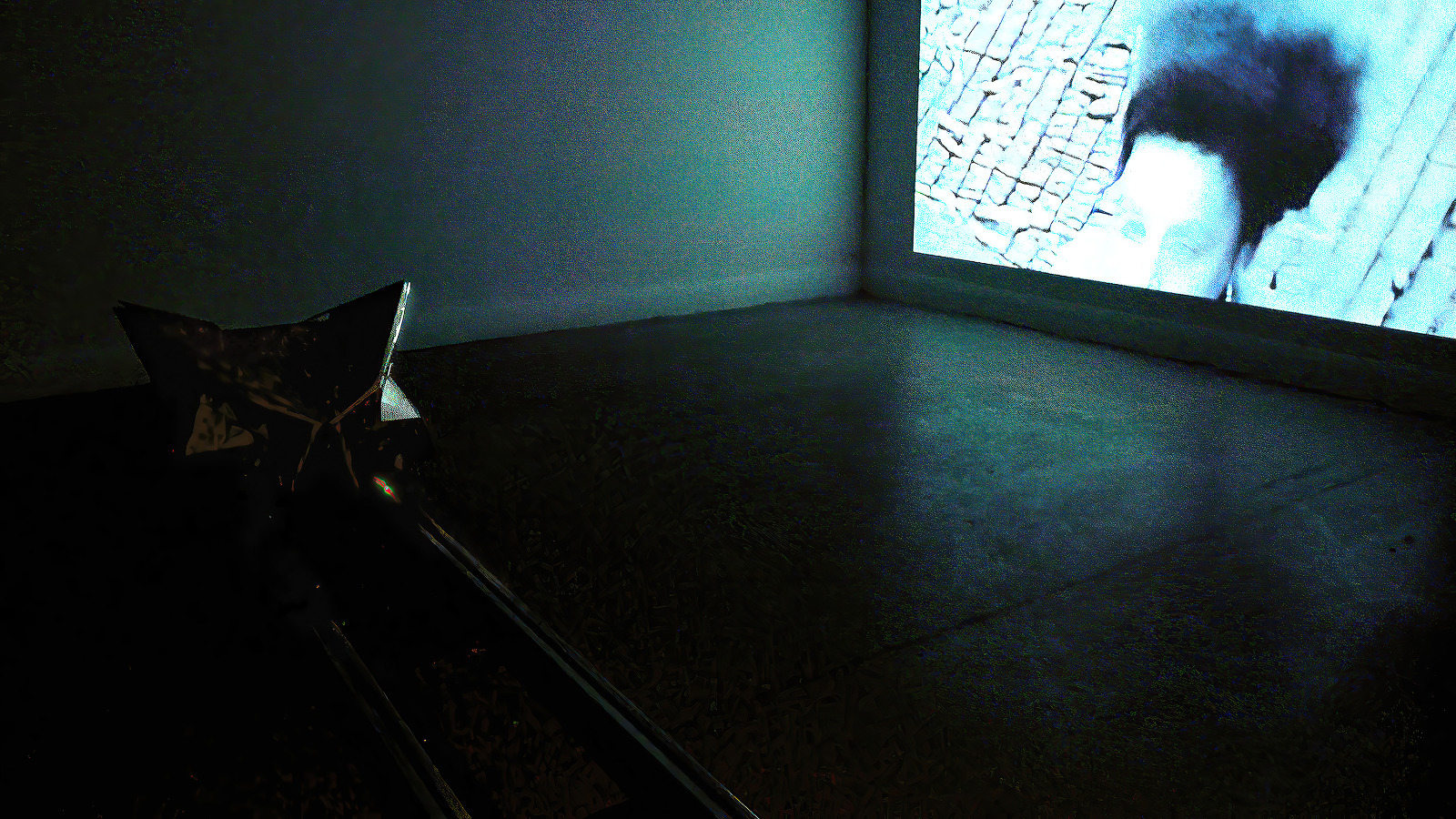 How does the installation at Furtherfield differ from the web experience?

This is really where COVID comes into play – it has caused a rapid evolution of UNINVITED in different directions from those we planned at the start of the year when we were designing the Furtherfield installation. The physical installation of the railed Monster in the gallery contains various dormant features which would have allowed it to actively respond to the presence of a human audience in the gallery as well as to the memories it is replaying in the movie. But like most of us now it is locked down in isolation, and as its physical body is curtailed it has expanded more into the online space – in the form of UNINVITED,ICU. I think within the gallery installation you are more aware of the grinding mechanical physicality of the Monster as it runs along its rails, and also that it is the primary movie audience whereas you are a step detached – watching the movie but also the Monster’s response.

Although you probably didn’t intend it that way, UNINVITED is a bit of a painful title for anyone working in the cultural world. This year, because of the pandemic, most of us have been uninvited to most of the projects/events we were working on. What happens to the installation at Furtherfield now that the country is in lockdown?

Haha, no the title has proved horribly prescient in a way that none of us could have anticipated. The installation in Furtherfield will remain in total isolation, quarantined from the world. Although it will expand soon to another quarantined installation, this time in an empty Communist-era theatre in Romania. Although it seems painfully ironic now, pre-COVID 19 we had initially talked about how interesting it would be to have the UNINVITED Monsters as a physical system operating in an isolated space and only perceivable remotely.

I’d also like to ask you about ‘/artefact’ a new video installation which premiered a couple of weeks ago at the Biennial Moving Image Festival Visions in the Nunnery Gallery in London. The work uses mapping data systems to lay claim to an area of Mars and erect a border around it. The work seems to make more tangible this phenomenon of using sophisticated machinery to unilaterally conquer territories humans could otherwise not access, like outer space or deep into the ocean. What were you trying to do with this work?

That’s an interesting take – I wrote myself a manifesto when I was planning /artefact and one of the tenets was “In a space that can only be perceived through mechano-digital mediation there is no meaningful gap between virtual and physical.” I’m really interested in the power dynamics embedded within the software infrastructures we all use. Platforms like Google Earth (which I used to generate footage for /artefact) generate a new shared reality overlaying and conflated with the physical world. They make new means of world exploration publicly available, while at the same time taking ownership of the visible appearance of the worlds and controlling what can and can’t be seen. I was really interested in playing within this dynamic. I’d also been spending a lot of time (virtually) travelling along border walls and looking at this awkward mapping (a kind of meta-drawing) of political power onto an indifferent geography. So I decided to examine this act by transferring it onto Mars and annexing territories for myself. I really liked the ridiculous hubristic incongruity of the idea. However of course it also anticipates the very real power exo-planetary power struggles we can expect to see played out over the coming decades.

UNINVITED is on Furtherfield website and gallery until 31 Jan 2021.