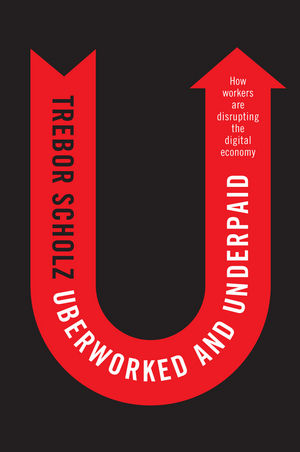 Uberworked and Underpaid: How Workers Are Disrupting the Digital Economy, by Trebor Scholz, a scholar-activist and Associate Professor of Culture and Media at The New School in New York City.

Publisher Polity writes: This book is about the rise of digital labor. Companies like Uber and Amazon Mechanical Turk promise autonomy, choice, and flexibility. One of network culture’s toughest critics, Trebor Scholz, chronicles the work of workers in the “sharing economy,” and the free labor on sites like Facebook, to take these myths apart. In this rich, accessible, and provocative book, Scholz exposes the uncaring reality of contingent digital work, which is thriving at the expense of employment and worker rights. The book is meant to inspire readers to join the growing number of worker-owned “platform cooperatives,” rethink unions, and build a better future of work. A call to action, loud and clear, Uberworked and Underpaid shows that it is time to stop wage theft and “crowd fleecing,” rethink wealth distribution, and address the urgent question of how digital labor should be regulated and how workers from Berlin, Barcelona, Seattle, and São Paulo can act in solidarity to defend their rights. 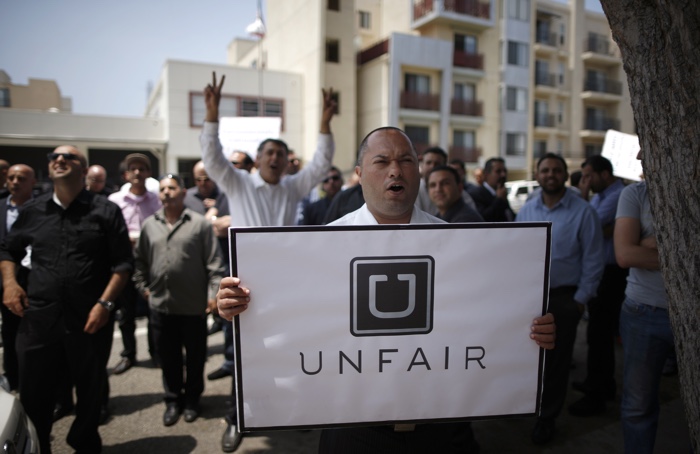 Uberworked and Underpaid looks at how digital labor, sold to us as an opportunity to live a flexible, fulfilling, independent life of ‘micro-entrepreneurs’, often camouflages a reality characterized by the slow disappearance of fair labor practices and an increase in economic inequalities.

CrowdFlower’s Lukas Biewald summed the situation up quite adequately back in 2010 when he said: “Before the Internet, it would be really difficult to find someone, sit them down for ten minutes and get them to work for you, and then fire them after those ten minutes. But with technology, you can actually find them, pay them the tiny amount of money, and then get rid of them when you don’t need them anymore.”

The victims of these new engines of exploitation are working for the usual suspects: Uber, TaskRabbit, Amazon Mechanical Turk, etc. However, the book also includes into this festival of precarity the many individuals whose work often remains uncompensated or underpaid: the interns, bloggers and journalists (to which i’m going to add most people involved in the art world) who are asked to work ‘for exposure’, Amazon’s book reviewers, anyone who has to solve one of Google’s reCAPTCHA, the fiction fans, the gamers, the DuoLingo users who engage in crowdsourced language translation, etc.

In a chapter about The myth of Immateriality, Scholz even goes as far as to include the millions of forgotten individuals whose very physical efforts fire off the digital realm: the cobalt and coltan miners in the Democratic Republic of Congo, the assembly line workers in Foxconn factories or the cooks and cleaners working at the facebook headquarters. 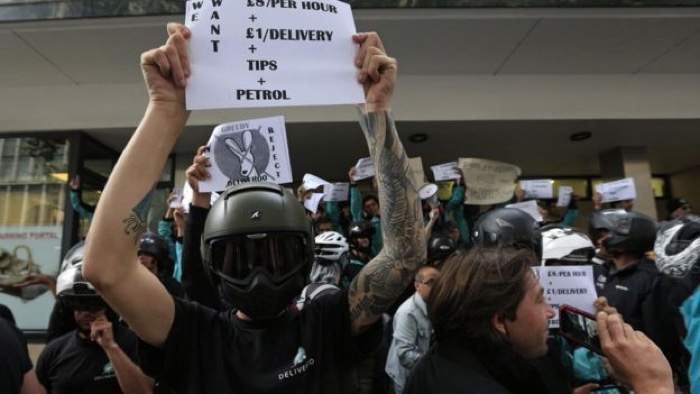 Deliveroo riders protest over payment changes in front of the delivery firm’s head office in London in 2016. Photo via BBC

Scholz documents and analyzes with great clarity and vigor how platform capitalists are exploiting the overabundance of vulnerable workers and how internet has become an efficient enabler of unethical work practices. However, his sharp critique of the so-called “sharing economy” soon leaves space for an in-depth inquiry into realistic models and ideas that could lead to a fairer digital economy. He particularly lays his hopes in Platform Cooperativism (some of them already exist: Loconomics in San Francisco, Fairmondo in Germany, etc.), explores the promises of Universal Basic Income, looks at existing unions, guilds and design interventions and drafts 10 principles for decent labor platforms.

Alex Rivera, Sleep Dealer, a 2008 film about getting all the cheap migrant works without the workers

Uberworked and Underpaid is a very informative and eloquent call for democratic and ethical labor practices. It sheds light on fairly depressing realities but comes up with encouraging and attainable alternatives.

Another reason why i found this book invaluable is that, unlike many publications about economy and society, this one frequently includes works of art, design, cinema and literature into its discourse.

I have only two minor criticisms. The first one is that i would have liked to read about citizens’ reluctance to relinquish cheap services. Many Londoners, for example, seem to prefer low-cost taxis to security and fair working arrangements. Similarly, when Foodora riders protested against the ridiculously low compensations they were receiving from the delivery company, the local population remained fairly unconcerned. I fear that we all bear our share of responsibility in what Scholz calls “crowd fleecing.”

The second commentary is that the book is, unsurprisingly, very U.S.-centered. However, the models and politics explored in Uberworked and Underpaid have already spread across continents so i believe that European readers will find the book extremely helpful and pertinent too.

If ever you’re in New York, you might be interested in the event The People’s Disruption: Platform Co-ops for Global Challenges convened by Trebor Scholz, Camille Kerr, Nathan Schneider and Palak Shah on 10 and 11 November at The New School, NYC.

Photo on the homepage: still from Alex Rivera‘s Sleep Dealer, via LatinoBuzz.