The delicate and colourful sculptures that the bulls above are carrying on their back are made from semen straws. These plastic straws are storage receptacles used in the process of artificially inseminating cows. They come in a variety of colours to help distinguish between different bull’s semen while being stored in liquid nitrogen.

Each straw sculpture has been specifically crafted by artist Maria McKinney for the animal whose genetic signature it denotes.

McKinney‘s project Sire (a “sire” is a bull used specifically for breeding purposes) investigates genetics in cattle breeding. Through these sculptures and their photographic documentation, the artist not only explores the past and future of humanity’s efforts to shape nature but she also reveals the hidden systems behind beef and milk production.

Shaping the cow of the future © Maria McKinney 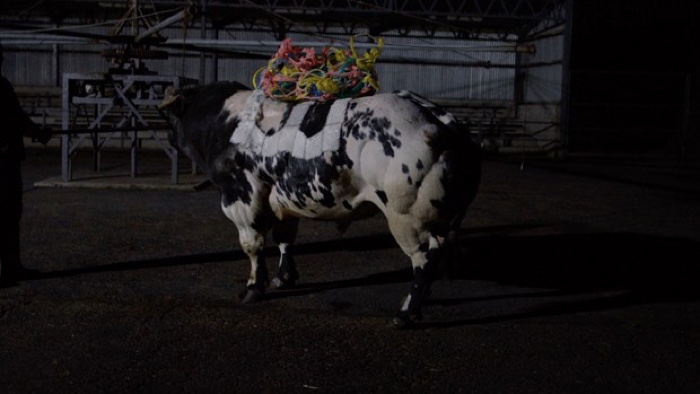 In pre-Christian Europe, people would perform a series of rituals in an attempt to influence the future behavior of nature. One of these practices involved crafting corn dolls, a figurine made by binding straw with the final sheaf of that year’s crop.

Today, genomics and its deep understanding of the complex patterns held within the structure of DNA give us the ability to manipulate how nature behaves in future generations of animal and plant species. With this field of science, scientists are now able to direct breeding strategies and conceive more ‘profitable’ animals.

McKinney‘s photographs and sculptures consider the newly proposed breeding objectives to ‘design’ the cow of the future: it would have to produce a large quantity of milk and meat, present good reproductive performance, live a long and healthy life, be docile and easy to manage, have a low environmental footprint, etc.

Throughout her project, the artist was in constant dialog with scientists. She worked with quantitative geneticist Dr. Donagh Berry, genome biologist Prof. David MacHugh and Head of Veterinary Clinical Studies Prof. Michael Doherty. The artist also consulted with a veterinarian and worked closely with the animal’s handlers to ensure the animals were not made uncomfortable or distressed while making the work. As for the bulls themselves, they are pedigree animals from Dovea Genetic, an artificial insemination co-operative with a bull stud farm in Ireland.

One of the many reasons why i found McKinney‘s work important is that she not only shows her work in art galleries but she also exhibited the sculptures at events attended by the farming community, including the National Ploughing Championships, Ireland’s foremost annual outdoor agricultural show:

I asked the artist how familiar farmers are with these fairly new breeding techniques. She explained me that “artificial insemination has been common practice for quite a few decades, whereas the use of genomics in cattle breeding has only been introduced in the last number of years. Farmers are being asked to put these breeding strategies into practice. They are the ones taking scientific theory into reality. They do however not blindly trust and often there is pushback from them, when they realize something that perhaps the scientists do not (in particular in relation to monetary gain promised by the scientific advantage). They know their animals and line of work very well, and I got the impression from speaking to some farmers that sometimes the ideal, controlled environment of scientific labs does not exactly always translate into the reality of farming.

And again, there is never a guarantee that the desired genetics of the bull will get passed down to the progeny (offspring).” 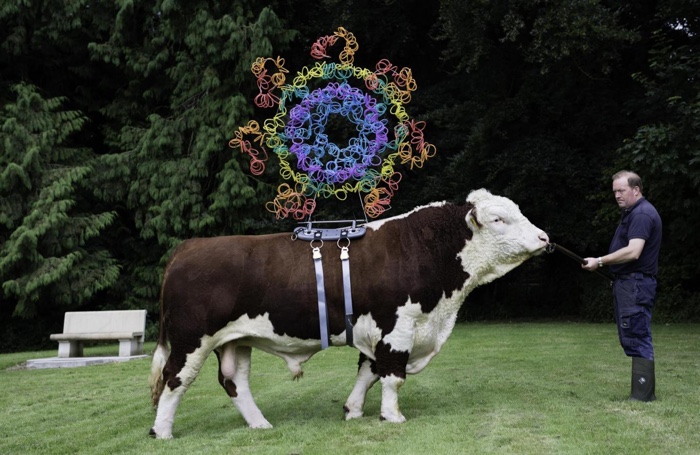 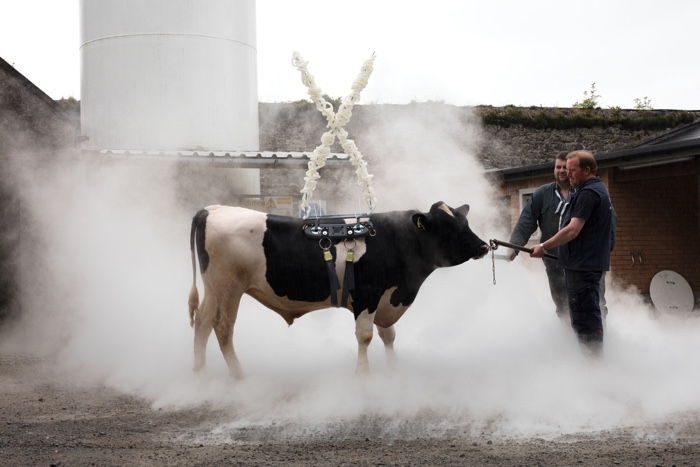 I was also curious (and naive) about the reason why artificial insemination is such a widespread practice. She told me that it is “because these animals are potentially dangerous to keep – at least a couple of people are killed every year by bulls in Ireland alone, so farmers do opt for artificial insemination.”

“The males of this bovine species are a lot more objectified than their female counterparts,” McKinney continued. “They are kept in basically quarantine farms like Dovea. They are treated very well here, probably some of the best pampered in the country. If they are not kept healthy both in feed and body, then it doesn’t matter how good their genetics are. Genetics is only really half of it. The environment an animal is kept in is equally important if they are to thrive and their positive genetics given the opportunity to express. This is the same for humans – I’ve been looking into epigenetics more recently.” 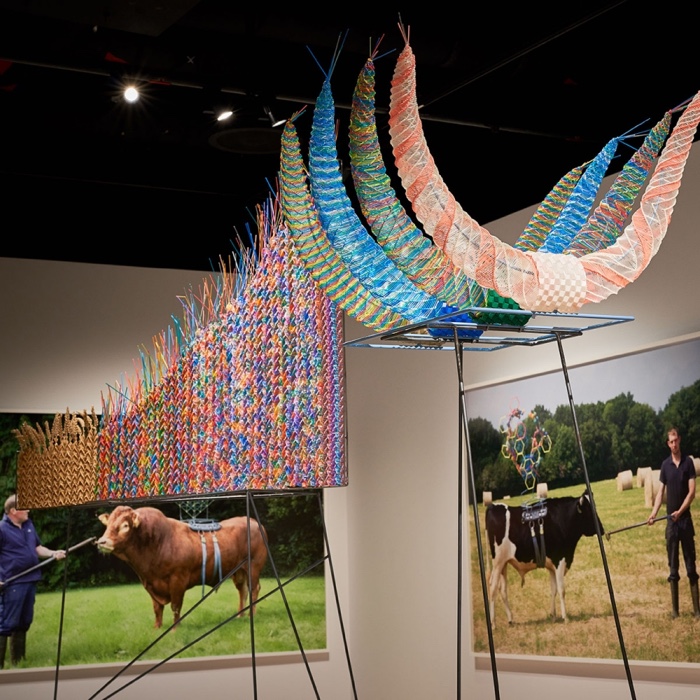 My favourite quote from our online conversation was a response to my concern about how we instrumentalize other living beings, how we customize them according to our desires:

“These bulls are more and more hidden away and people don’t really think about them. Most people do not realize the day to day reality for these animals. I realized once I made this work, that it actually made them visible again. People couldn’t turn away, as the photographs are large scale and are quite confronting. The animals mostly are looking directly at the camera. They are present.

I am of course concerned about the position of animals on earth today. We consider them so separate, forgetting our own animal origins. Yet, we have benefited from their nutrition for centuries. Their muscle has provided us with both sustenance and brawn (cattle were also draught animals before mechanization). They have fueled and helped build the society we now find ourselves, while we continually push them to the margins.”

Maria McKinney’s work is part of the exhibition Somewhere in Between, on view at the Wellcome Collection in London until 27 August 2018.

If the questions raised by McKinney’s project interest you, then you might enjoy the following podcast: The New Animals which looks at animals genetically engineered for human consumption.