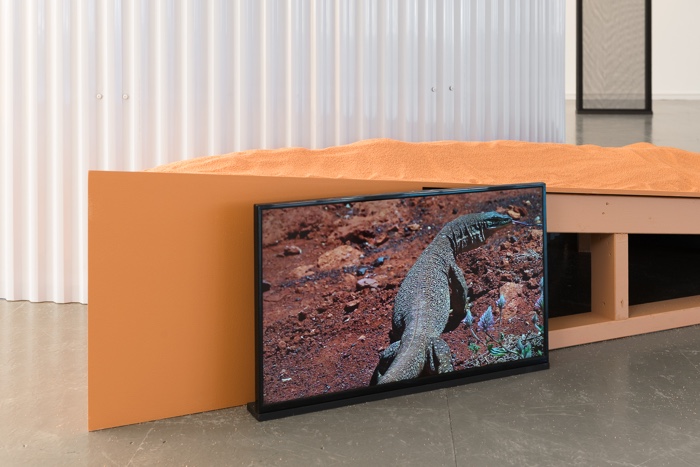 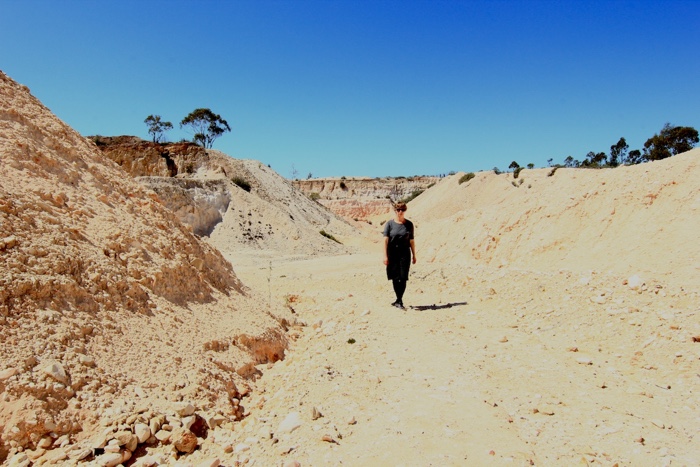 The latest edition of the MOMENTUM, the Nordic Biennial of Contemporary Art explores the increasing unease and sense of alienation we feel when confronted with a world increasingly governed by technological, ecological and social shifts. I’ve already reviewed the event in previous stories but today i’d like to take a closer look at Linda Persson‘s contribution to the biennial because it uses several lenses and strategies to investigate aspects of our electronic culture that often remain under-scrutinized.

Informed by several years of research in the Australian outback desert, It Was Like Experiencing a Fold in Time, She Said bridges the gap between, on the one hand, the landscapes, mythologies and life of outback and aboriginal communities and on the other hand, the brutal origins of our technological ‘progress.’ The work highlights how alienated we are from the geological physicality of our so-called immaterial digital technology. Many of us might not realize it but there would be no IT, no ‘green’ energy without rare earths, iron ore, cobalt and other minerals that are dug out of the ground at huge costs for the environment and local communities. 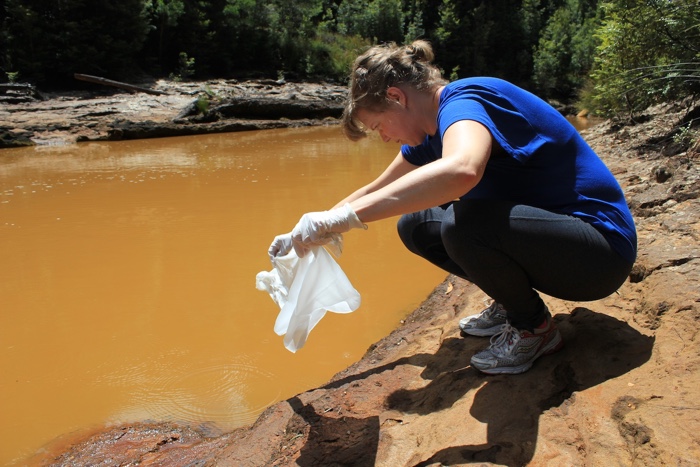 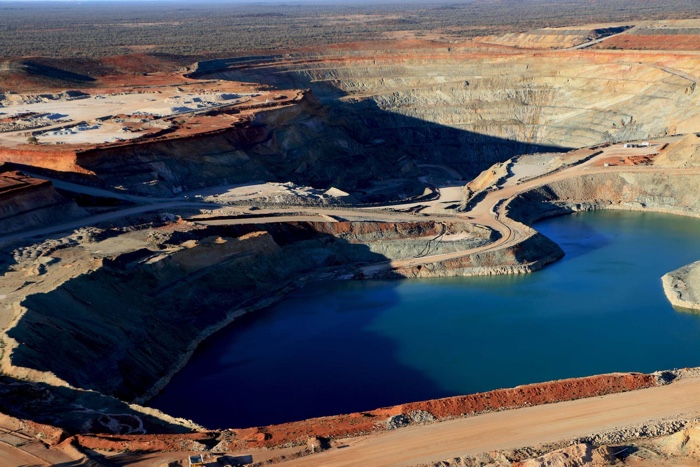 Over the course of her research across ghost towns, open mining sites and discussions with local communities, Persson has been uncovering the toxic traces left by the mining industry on indigenous lands and human lives. Some of these traces are palpable and highly visible. Others are far more insidious and concealed. 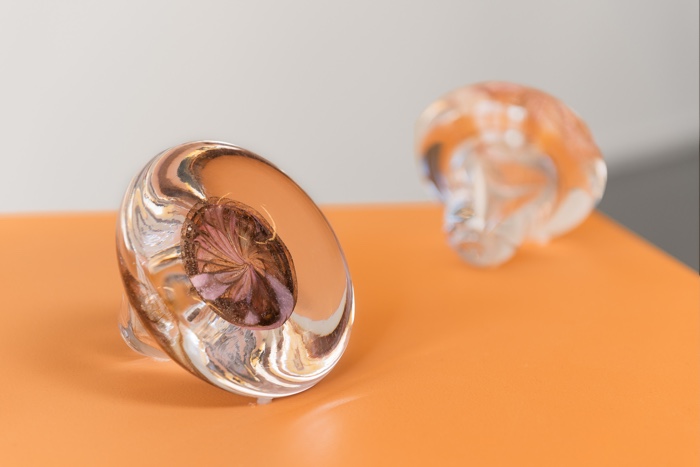 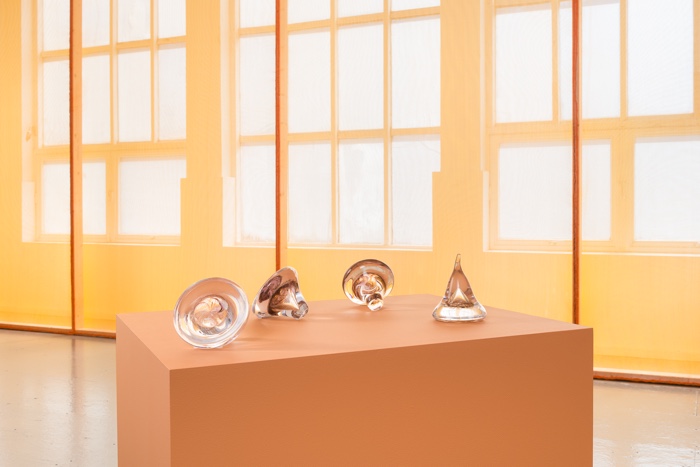 Burkholderia pseudomallei is of the insidious kind. When in contact with humans and animal through air or skin wounds, this microscopic bacterium can cause a deadly disease called Melioidosis that eats into the brain and spinal cord in a matter of days. The bacterium normally lives into the soil and its emergence is one of the unintended consequences of the increase in mining, oil and gas extraction in Australia.

Over the past few years, the country has seen a surge in the number of Melioidosis cases and the disease is expected to spread south with climate change.

Persson managed to render visible the presence of the microscopic bacteria in the most poetical and visually seducing way. She magnified them as beautiful organic patterns fossilized inside hand-blown glass sculptures. 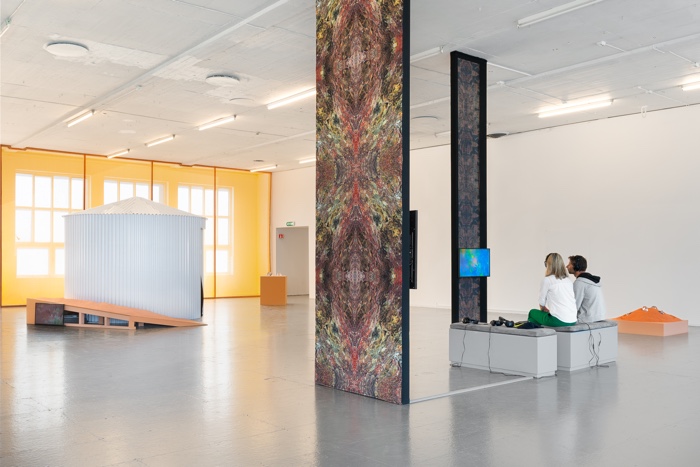 Another chapter in Persson’s exhibition at Momentum 9 is And Then We Ran Away, a video work that weaves together interviews with Aboriginal women talking about their many languages and culture, images of fauna and flora as well as helicopter rides over the scars that mining activities leave on the landscape. The film quietly conveys how indigenous land is heavily exploited for the raw materials that power the technology we use on a daily basis. Aboriginal peoples, hit by the industry while being often excluded from it, have a deep connection to their ancestral land. The loss, profiteering and poisoning of the territory has thus a devastating social and physical impact on them. 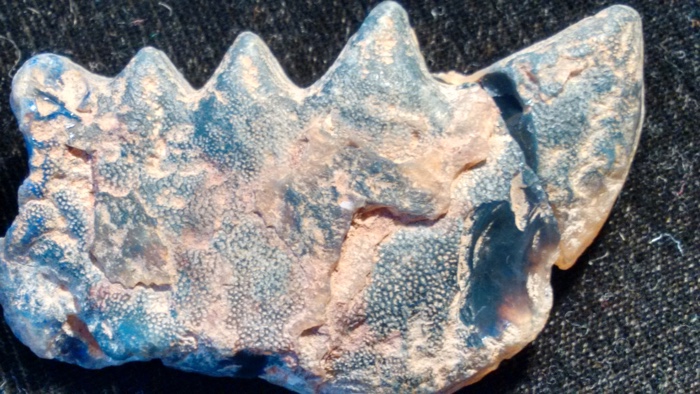 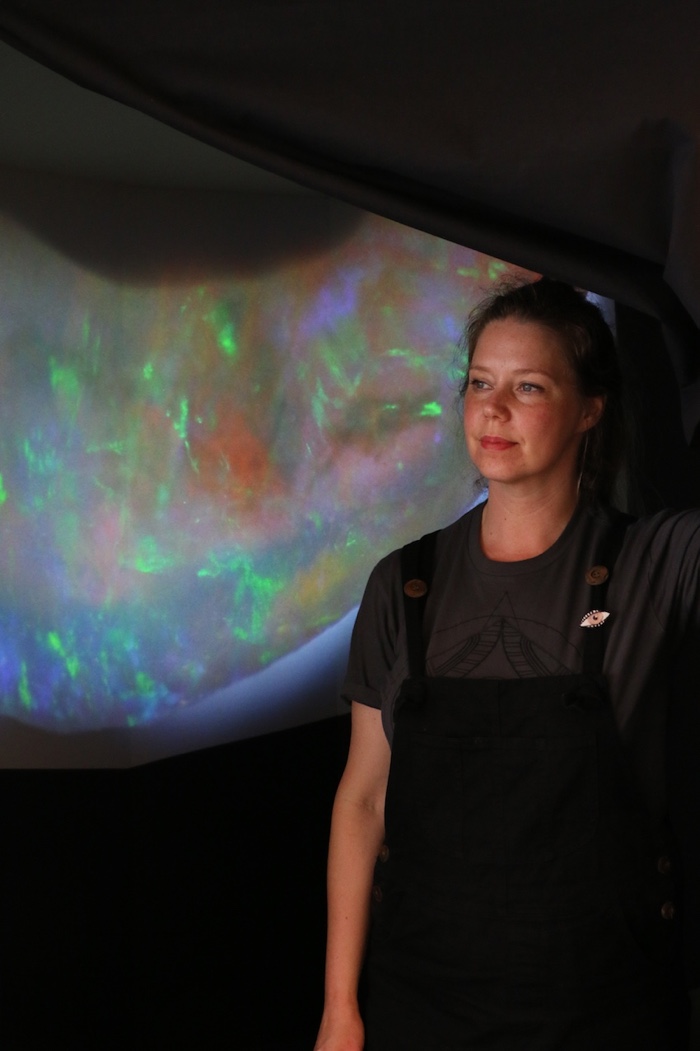 Linda Persson, It was like experiencing a fold in time, she said, 2017. Photo : Liam Sprod, courtesy of Linda Persson< 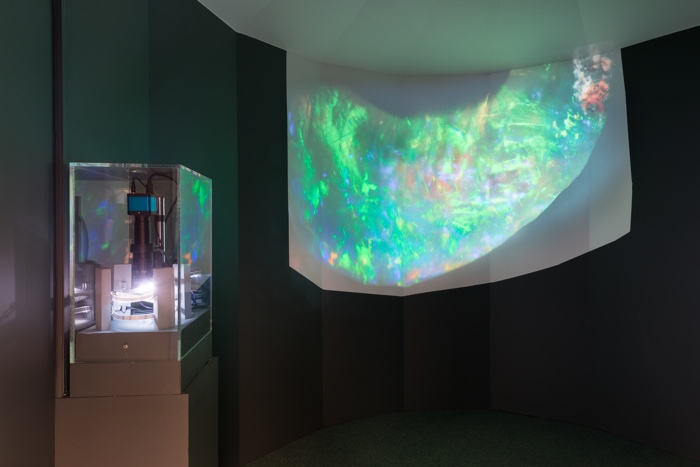 The final work in the show is SiO2.nH2O, a video installation that unfolds the various time frames of our mineral-mediated culture. SiO2.nH2O is the chemical formula of opal, the national gemstone of Australia. And the .n stands for the water molecules enclosed into tiny voids within the silicon structure, suggesting a dormant life inside the mineraloid.

SiO2.nH2O takes advantage of the internal structure of opal which is able to diffract light: Found 23-40 metres underground, surrounded by thousands of years in sandstone and clay, the opal acts as a time machine producing a light show that makes deep time visible here in the present. It portrays the potential of life, encapsulated dormant inside, ready to awaken in a future that the human species might never get to experience.

The ability of opal to act as a time travel agent doesn’t end there. It turns out that opal miners in Lightning Ridge, one of the towns in New South Wales where Persson worked on her research, have been digging up dinosaur fossils for years. Even more interestingly, the remains of the prehistoric reptiles are preserved as opal.

It Was Like Experiencing a Fold in Time, She Said is framed by an artificial landscape. The red sand used in the exhibition doesn’t come from the Australian outbacks, it simply imitates its colour of the burnt out desert area. As for the kaleidoscopic collages printed on the panels, they give a vertiginous top-down overview of the landscape around the mines, wounded by extraction processes. 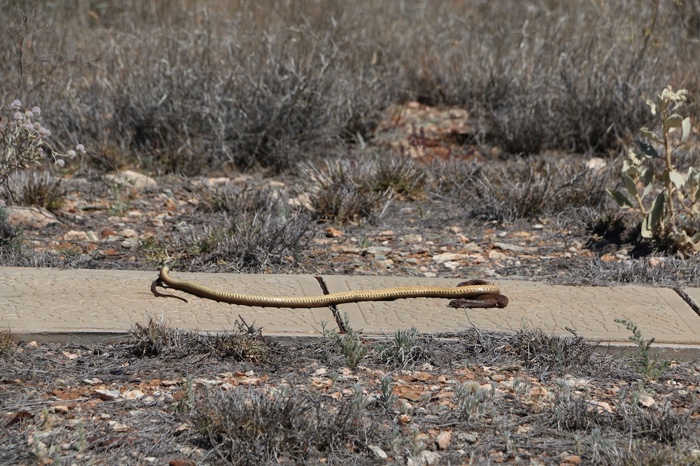 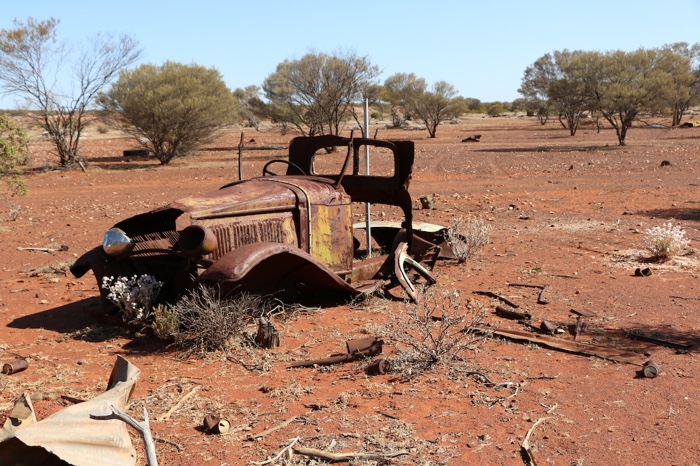 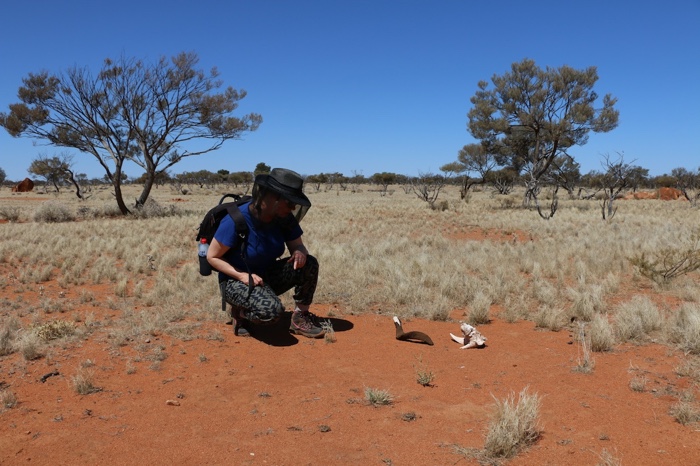 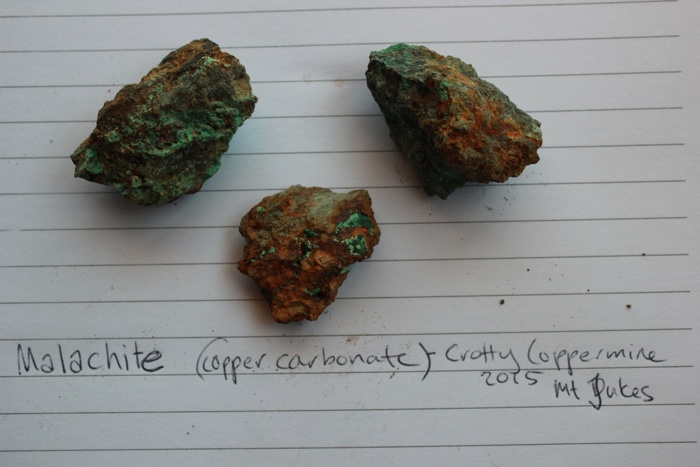 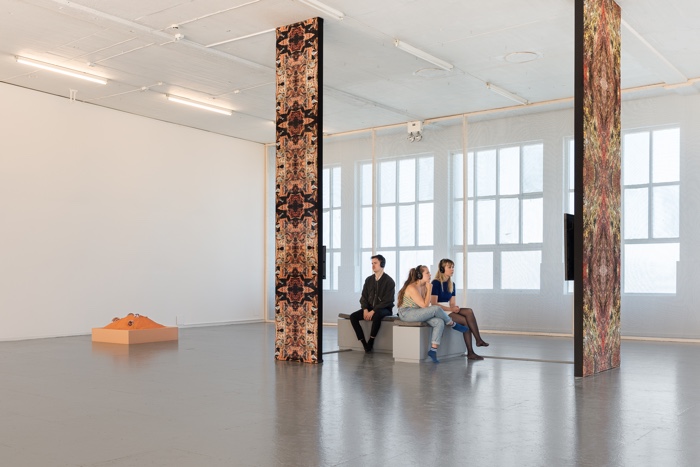 Previously: MOMENTUM9 – “Alienation is our contemporary condition”, MOMENTUM9. Maybe none of this is science fiction, The Museum of NonHumanity and MOMENTUM 9: A case for user-alienating design.