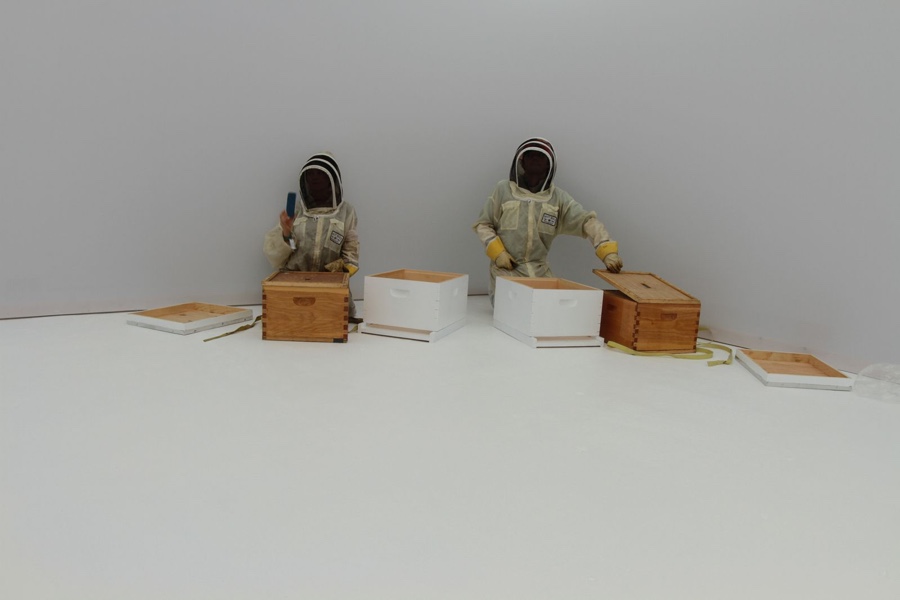 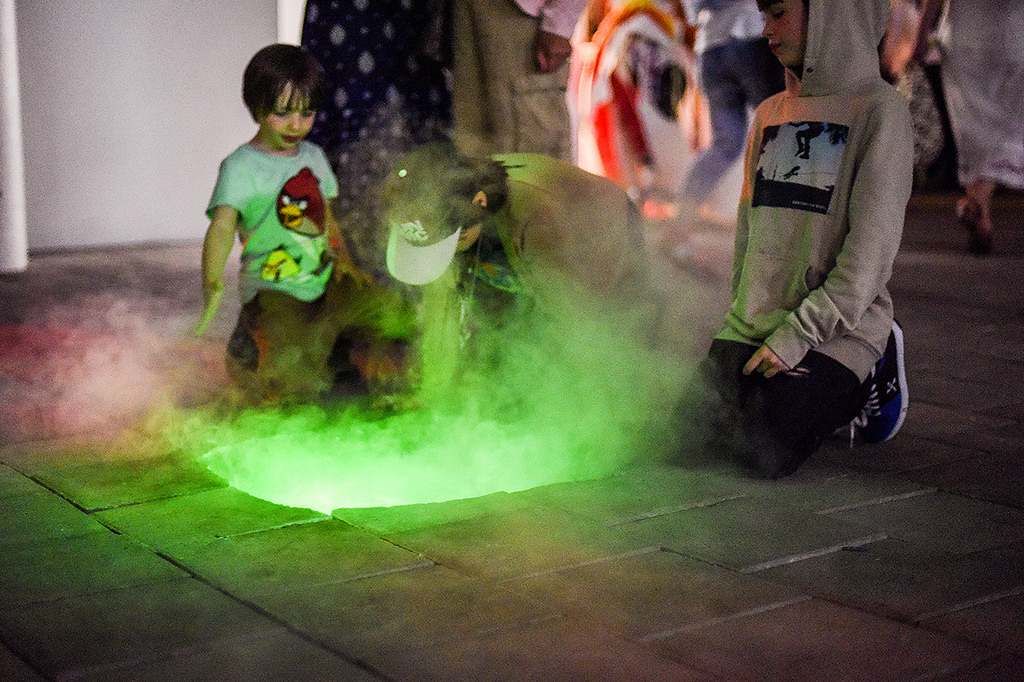 Momentum 9, The Nordic Biennial of Contemporary Art, opened a few days ago in Moss, Norway. Its focus is Alienation, a pertinent theme for a time characterized by deep social and economic inequalities, new forms of rabid colonialism, atmospheric turmoil, transhumanism, closing borders and relentless questioning of democracy.

As Momentum 9 demonstrates, alienation is a daunting condition but it also provides us with an opportunity to reevaluate our long-established values and dogmas. If our world is being changed beyond recognition, then maybe we should engage directly with the alien, embrace its many challenges and start envisioning a ‘differently humane’ future.

All of the above means that there is a lot to unpack, discover and mull over in Moss. I’ve got notes, photos, research materials and ongoing interviews all over my laptop so i’ll definitely get back to you with more stories. In the meantime, here’s a first group of artworks that explore ongoing ecological and human alienation: 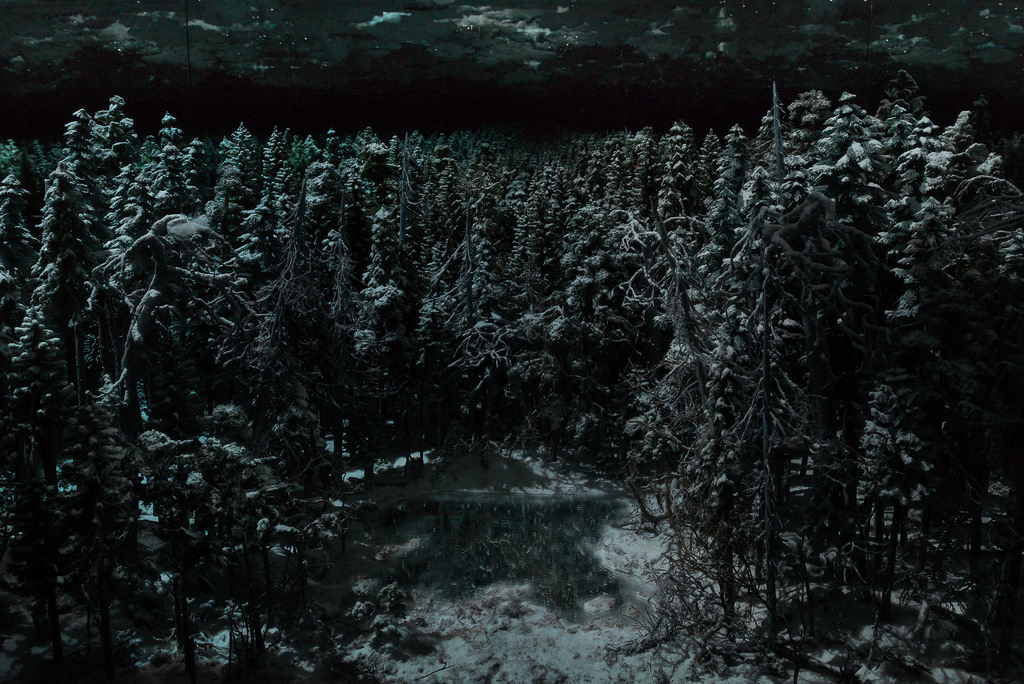 Jussi Kivi’s Moon Woods is very familiar but also strangely alien. It is both a piece of sublime Northern landscape and a formidable scene that suggest night creatures, secrets and danger.

The work is shown inside a completely dark room. You need to tentatively make your way across the space and allow your eyes to adjust before you can see the work. The forest is shown behind a glass window, suggesting perhaps a fragile fragment of nature, one that mankind might not have spoilt yet. A relic enshrined in a museum display that clinically abstracts it from a context probably made of highways, mining industry, toxic liquids seeping into the ground and polluted rivers.

With this work, Kivi explores the concept of solastalgia (a portmanteau of the words ‘solace’ and ‘nostalgia’), a new form of distress caused by environmental change close to your home. 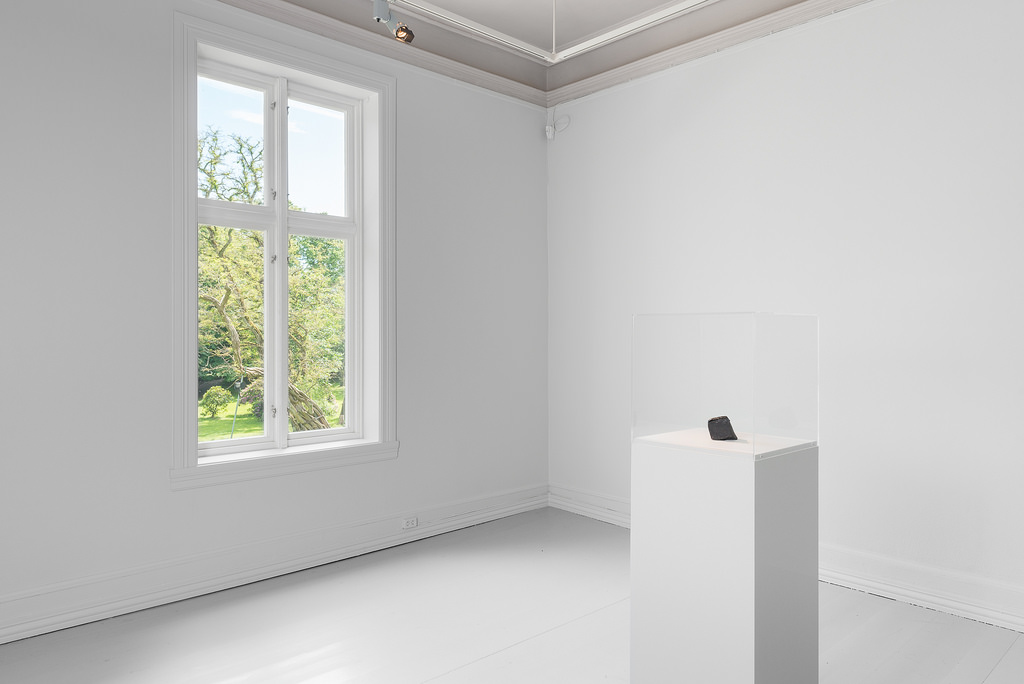 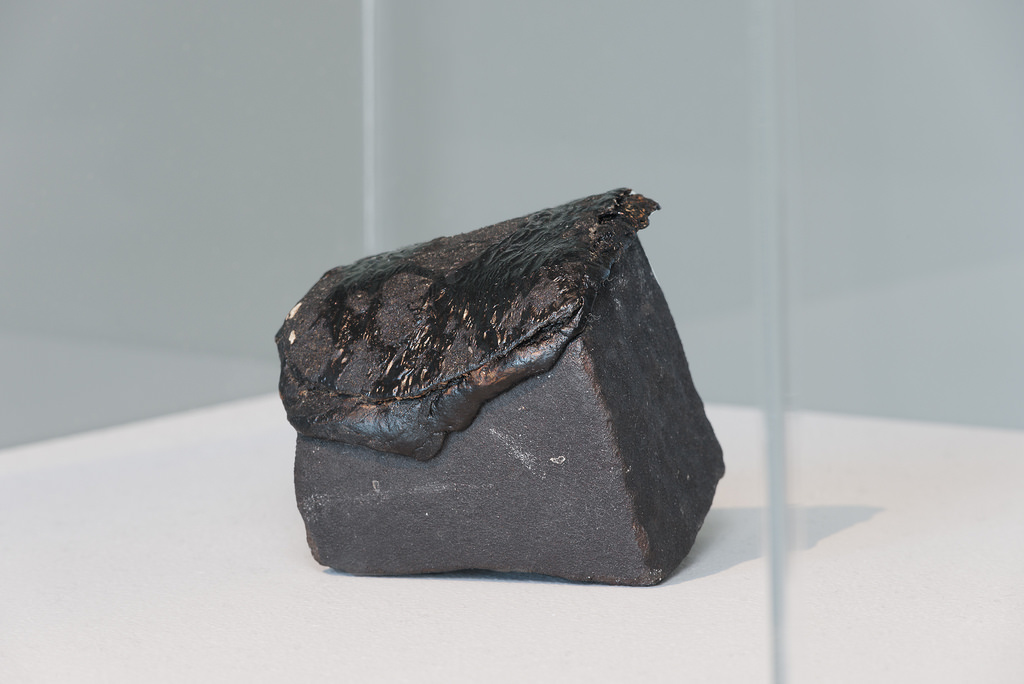 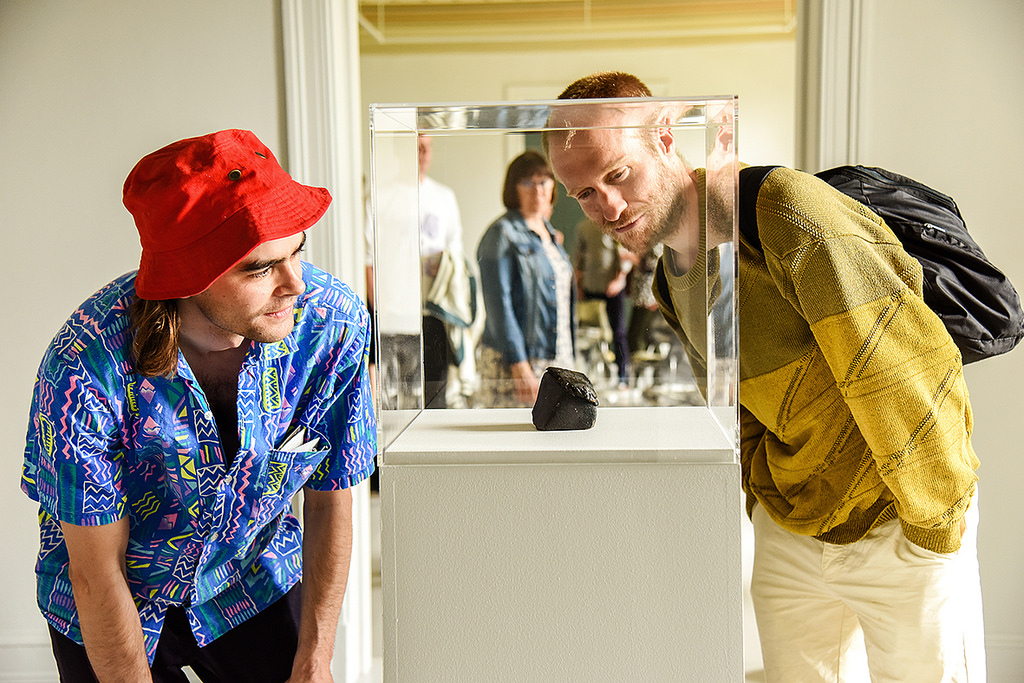 Right in the middle of the list of participating artists is ‘Meteorite.’ And Meteorite, it turns out, is not a pop band or a performance group as i had expected but a real piece of meteorite fallen on the area in 2006. This particular fragment of the Moss Meteorite, a loan from the Natural History Museum in Oslo, is a rare specimen of Carbonaceous chondrites, a class of outer space debris which makes for less than 5% of all meteorite falls. This rubble from the cosmos deserves a place in the biennial because it comes with a chunk of a rooftop isolation material that had melted when the fireball fragment hit a house in Moss. Unassuming and as black as a Malevich black square, the object perfectly encapsulates a concrete encounter between the man-made world and the extra-terrestrial one. 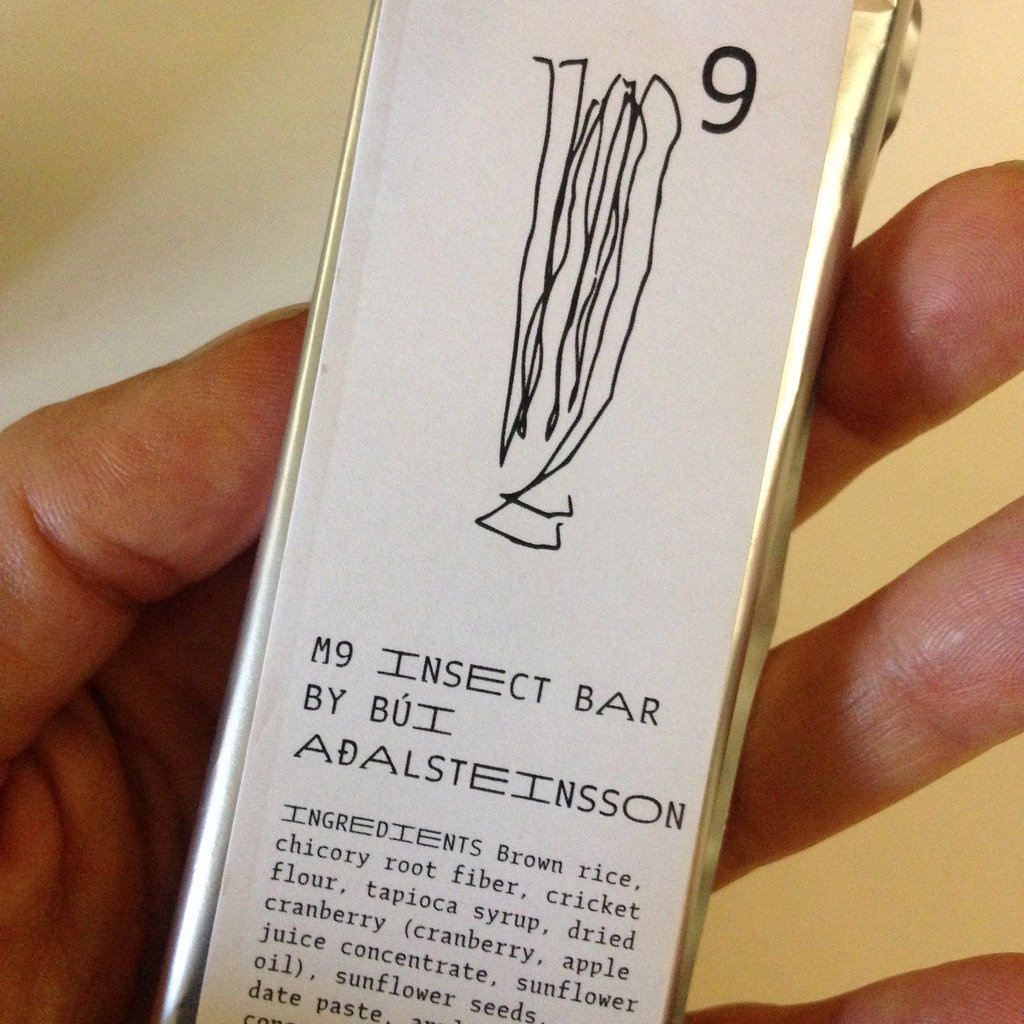 Anyone eager to travel long distance and experience first-hand this extra-terrestrial world might end up snacking their way to Planet Mars with a pile of Búi Adalsteinsson‘s insect bars. 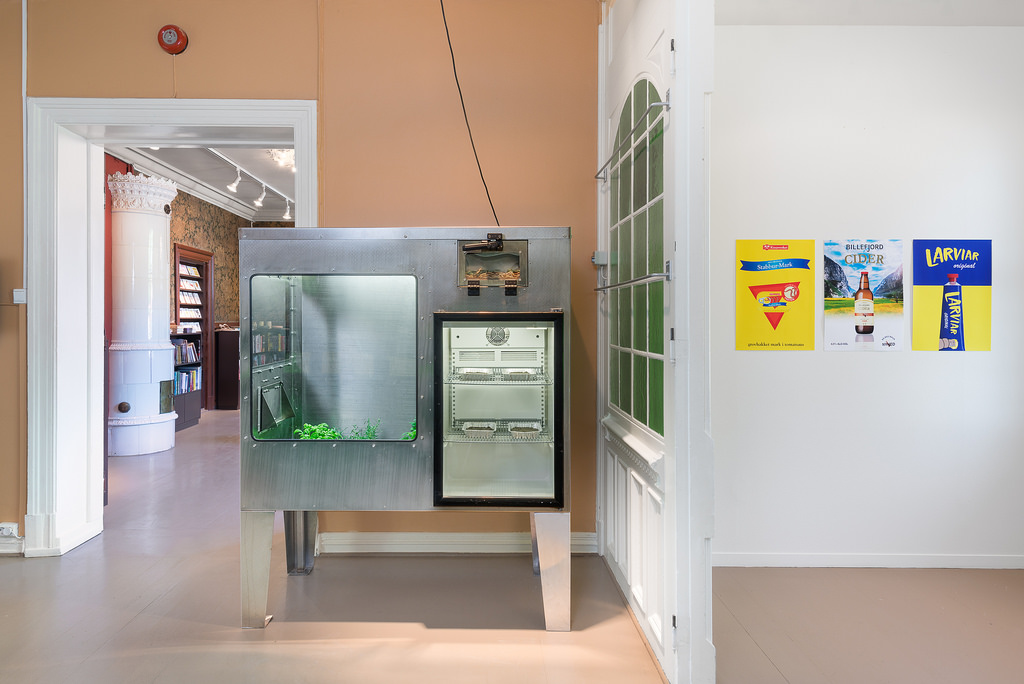 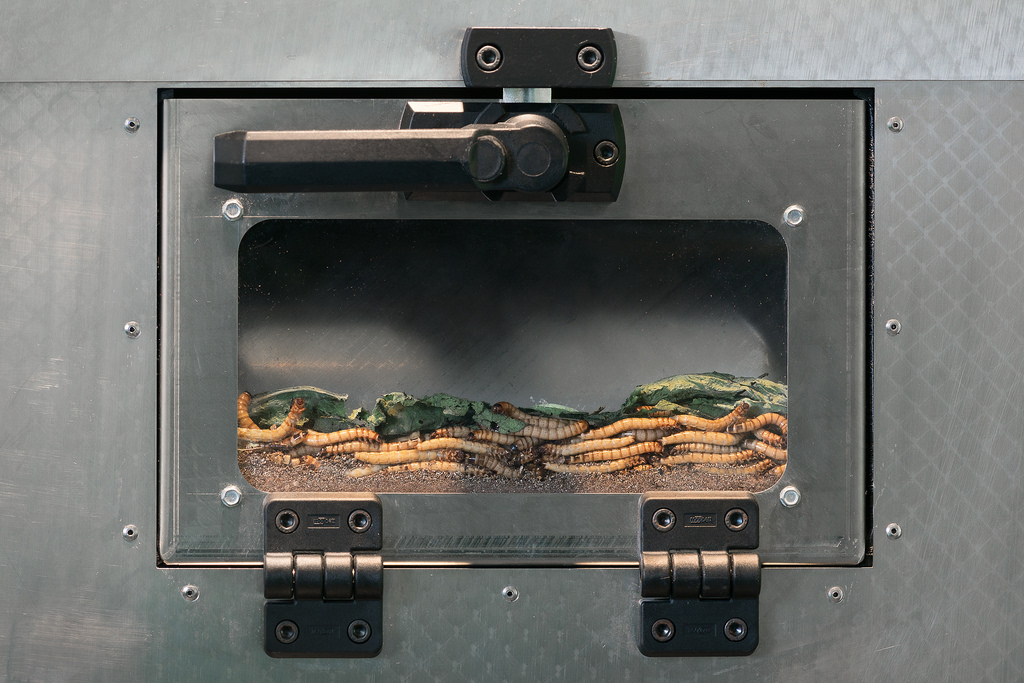 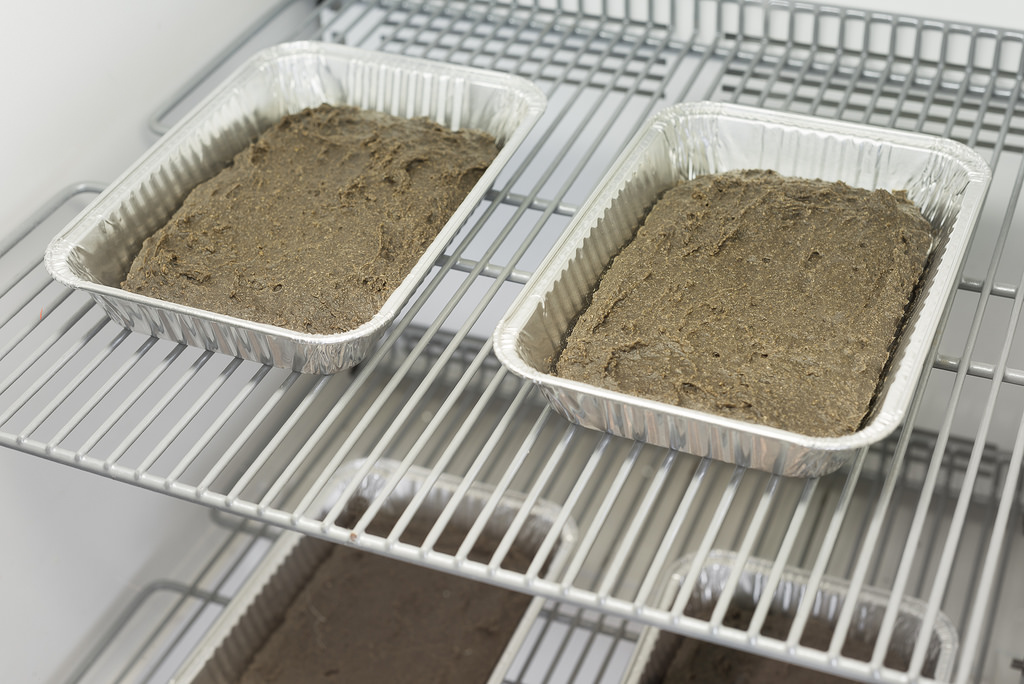 A few years ago, the designer started looking into the possibility of creating self-sustainable food systems that would use insects as their main component and feed our overpopulated world. He believes that insects can provide us with a nutritious and -crucially- very sustainable source of food if only we would let go of prejudices and knee-jerk reactions to the idea of consuming larvae and creepy-crawlies.

Insects might indeed look terribly unappetizing but no one has ever accused them of producing too much greenhouse gas.

We were offered some very crunchy and very delicious insect bars during the press view and we also got to see Adalsteinsson’s Fly Factory, a piece of furniture that might grace our kitchen in the future. This breeding tank was designed so that it uses leftovers and produces no waste.

Check out this very entertaining and informative talk Adalsteinsson gave in 2015 to try and convince the audience that eating insects makes perfect sense. 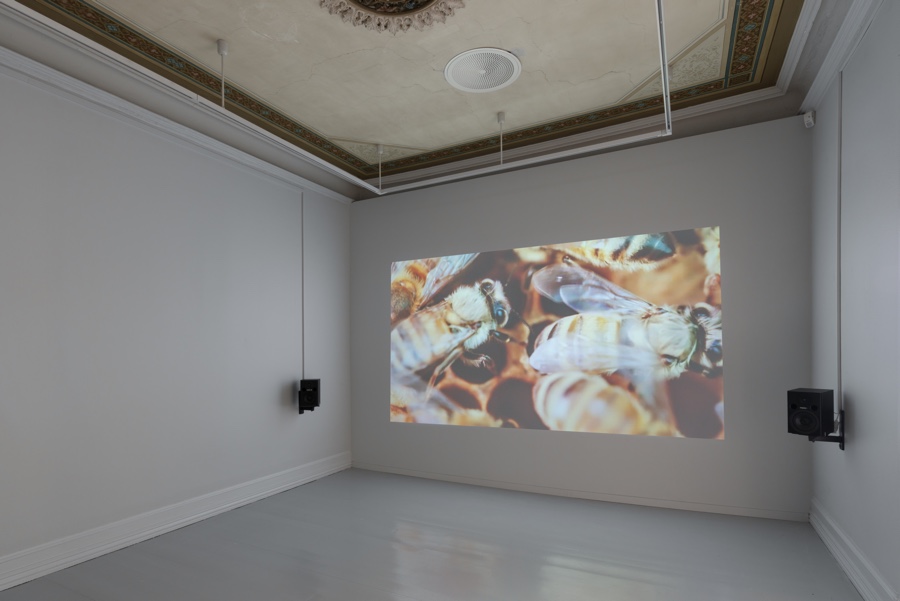 The Mediated Matter’s Synthetic Apiary provides an artificial perpetual spring environment in which seasonal honeybees can live and work year-round. The designers hope that by controlling precisely the bee environment, we will have a better understanding of their fabrication capabilities and health.

The long-term goal is to integrate biology into a new kind of architectural environment, and thereby the city, for the benefit of humans and eusocial organisms.

This is certainly a praiseworthy aspiration. Beekeepers and scientists are registering massive decline in bees worldwide. The suggested causes for the crisis include climate change, pollution, loss of habitat, pesticides, stress due to transportation to multiple locations for providing pollination services, malnutrition, etc. Or a toxic combination of several factors. The situation is alarming because a third of the food we eat depends on pollinators -especially bees- for a successful harvest. Which means that the decline of bees and other pollinating insects might compromise biodiversity and agricultural yields.

“Minute 2:33 in the video documents the first birth in a synthetic environment: the only life this bee knows is of an existence in the Synthetic Apiary,” says the project page.

This Synthetic Apiary made me feel deeply uncomfortable. I can’t help but feel sad at the idea that these bees are living in an entirely manufactured environment, feeding on artificial nectar and artificial pollen, experiencing only a bright white world with a few humans who come to monitor their health at regular intervals. Besides, i’m always suspicious of solutions that consist in throwing artificial habitats, unyielding control and even more technology at environmental problems.

On the other hand, the project makes for lovely photos: 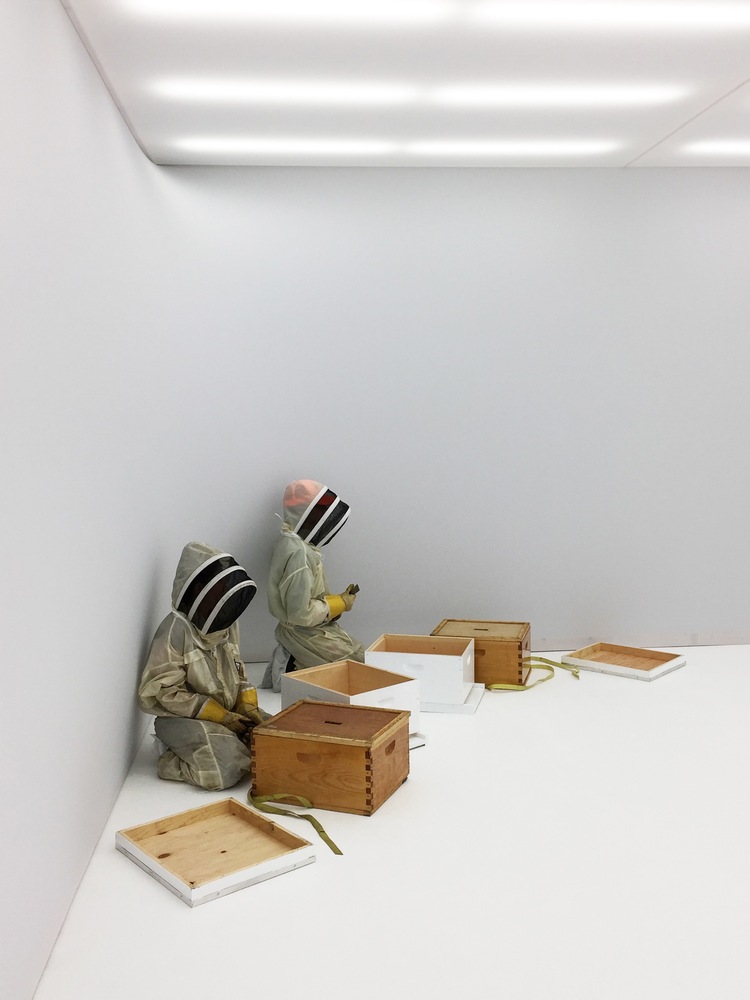 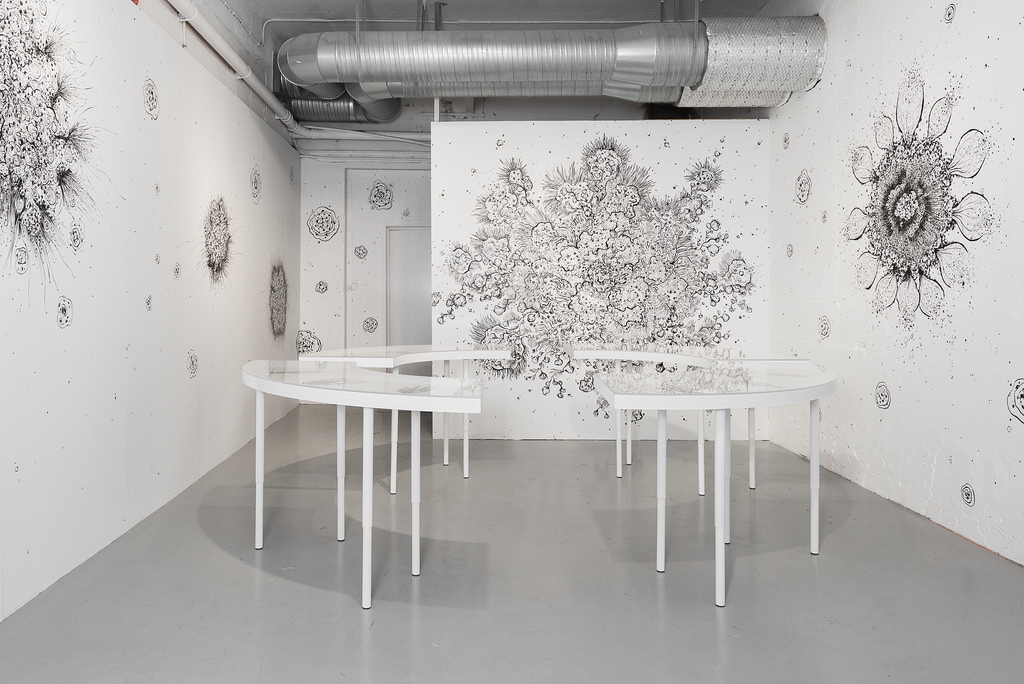 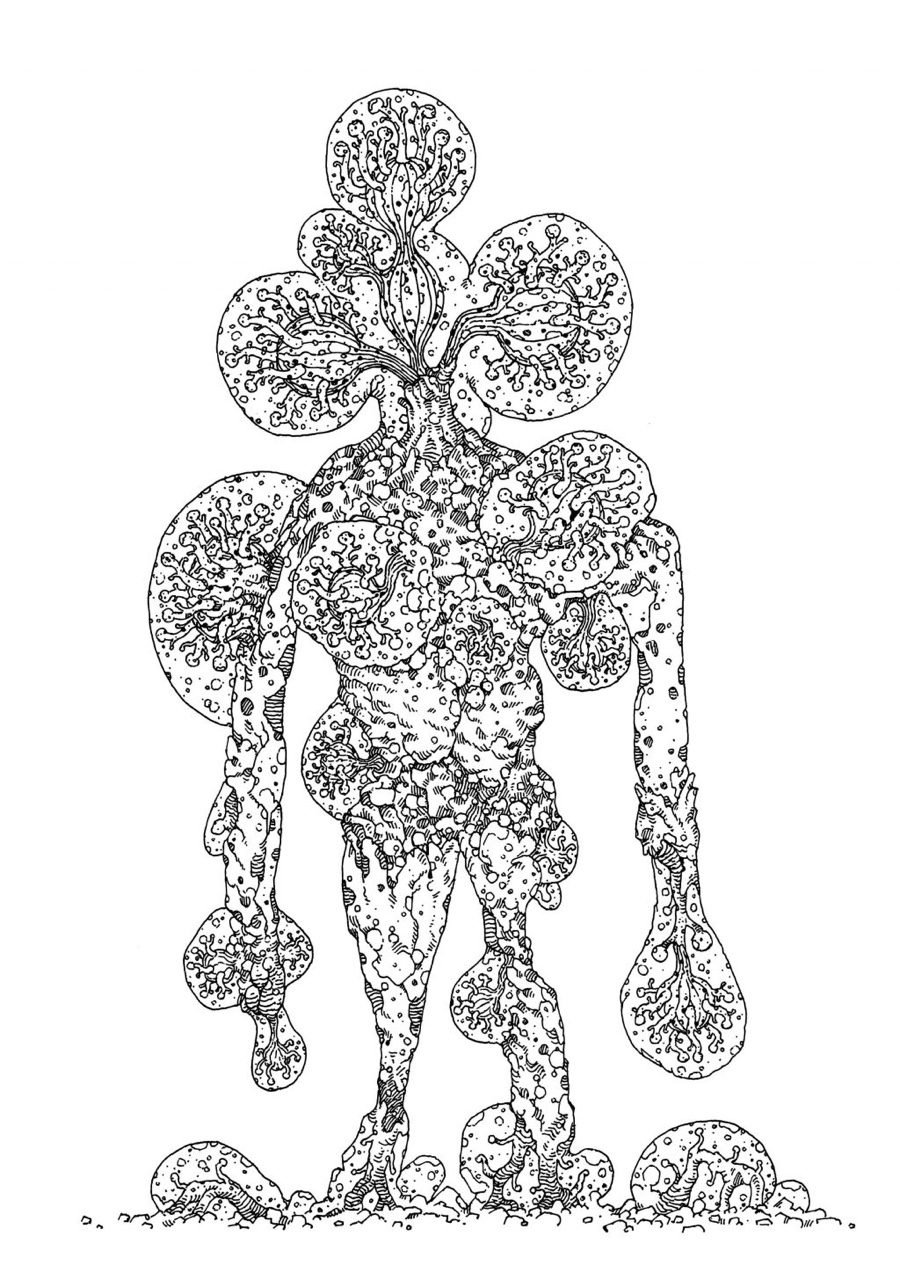 With his Transmutations of Human Bodies and Flora drawings, Stathis Tsemberlidis explores transmutations of the human body and how it can be modified by floral and fungal growths to the point of becoming a grotesque, yet highly seducing, new hybrid entity. 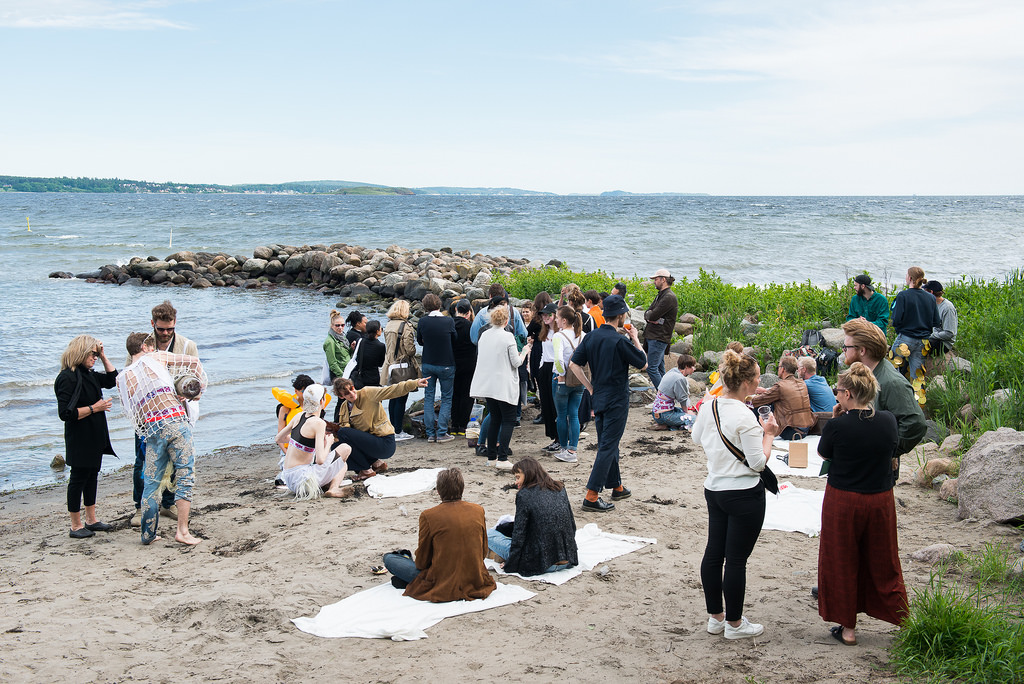 A performance by Trollkrem at Alby Beach. Photo by Istvan Virag

Trollkrem treated us to a performance in relation to Deep Down Below, the work they are showing in the Momentum Kunsthall. They kindly offered to paint our faces in unnatural shades and served whale steak as part of the ‘refreshments.’

I’m going to mention briefly Patricia Piccinini’s Atlas sculpture. Everyone i talked to during the press trip loved it. As for me, I’d rather eat one of Aðalsteinsson’s larvae pâtés than spend 2 minutes in the company of her creepy creatures. But i know i’m in a minority here. Hence the photo: 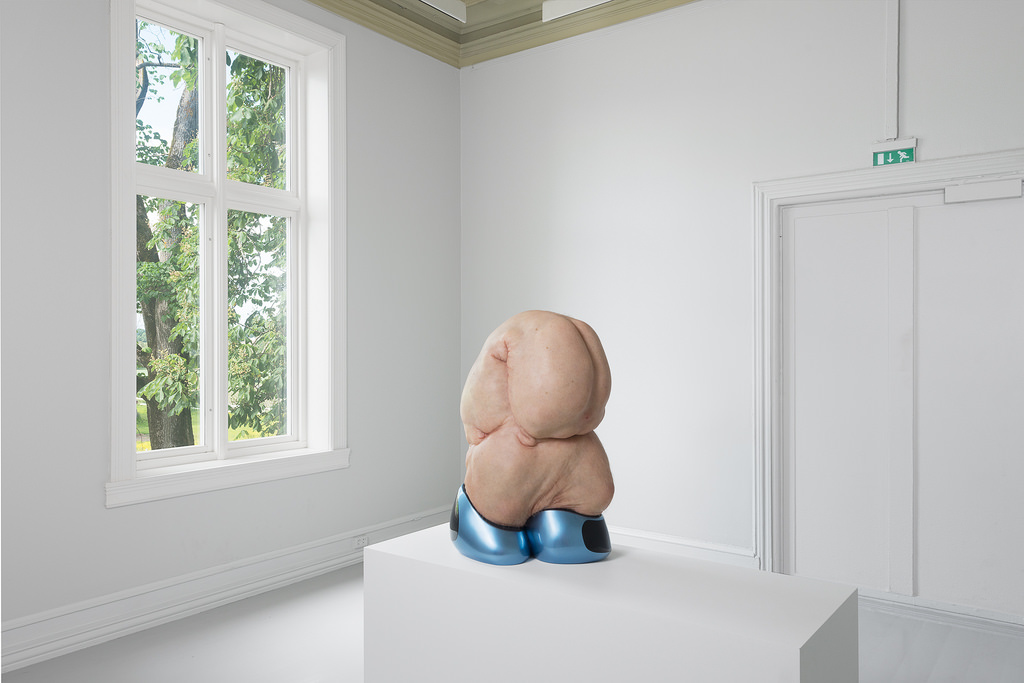 I need to add that i really REALLY liked Moss. Not so much the city center. It is basically one street with a few shops that make a pathetic attempt at distracting you from the spectacularly beautiful surroundings: the wooden houses, the landscape, the sea, etc. Bonus! It’s a mere one hour drive from Oslo.

Here’s some random photos i took while i was there: 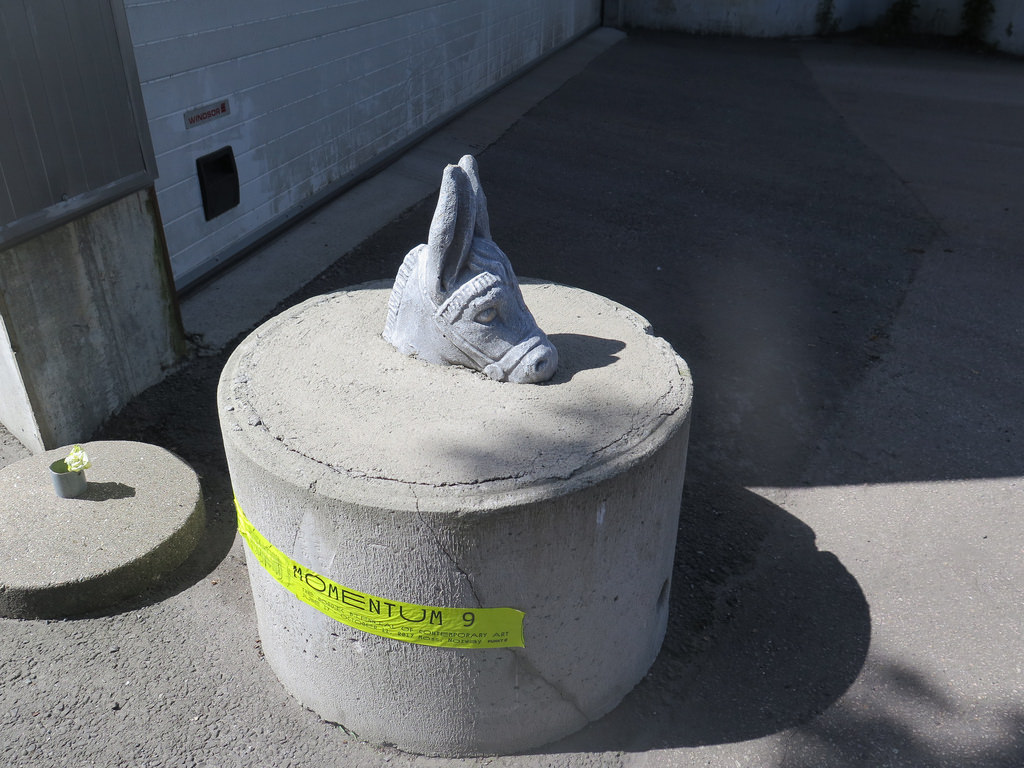 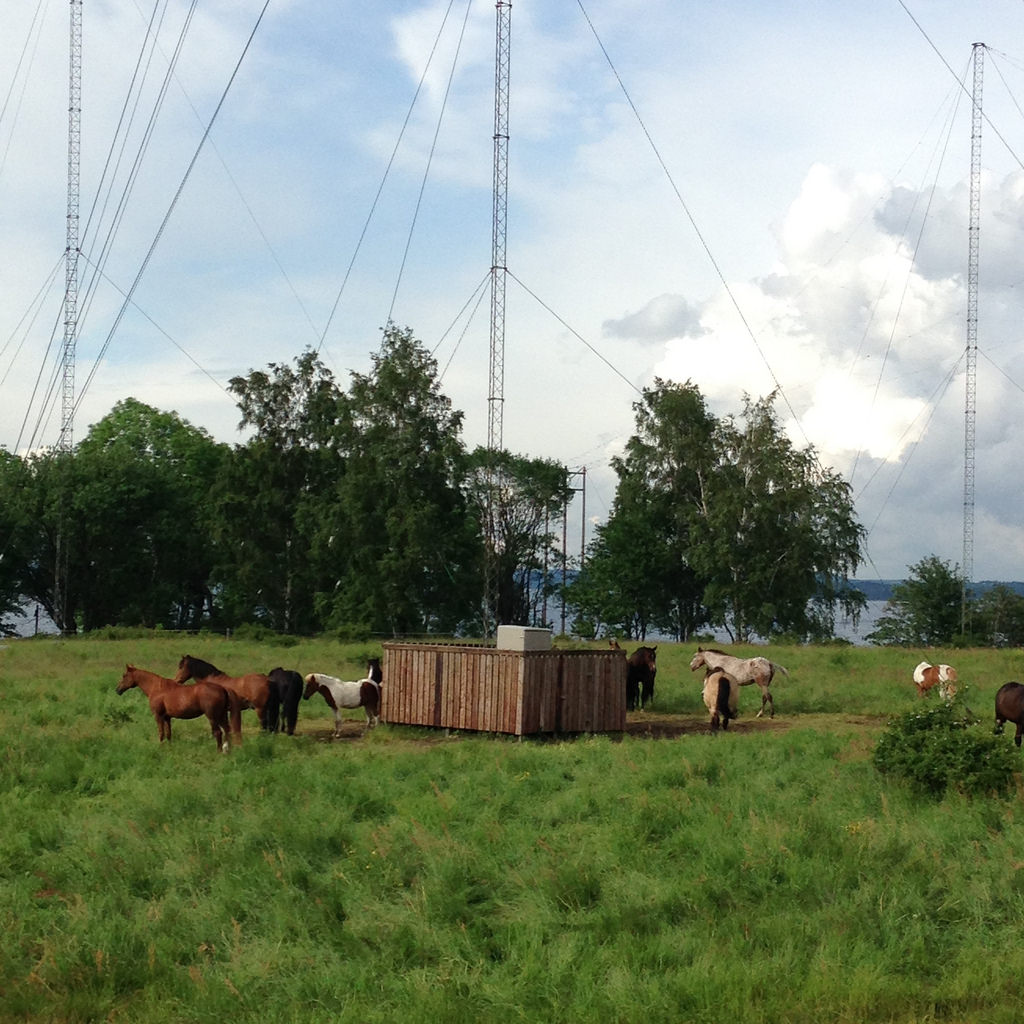 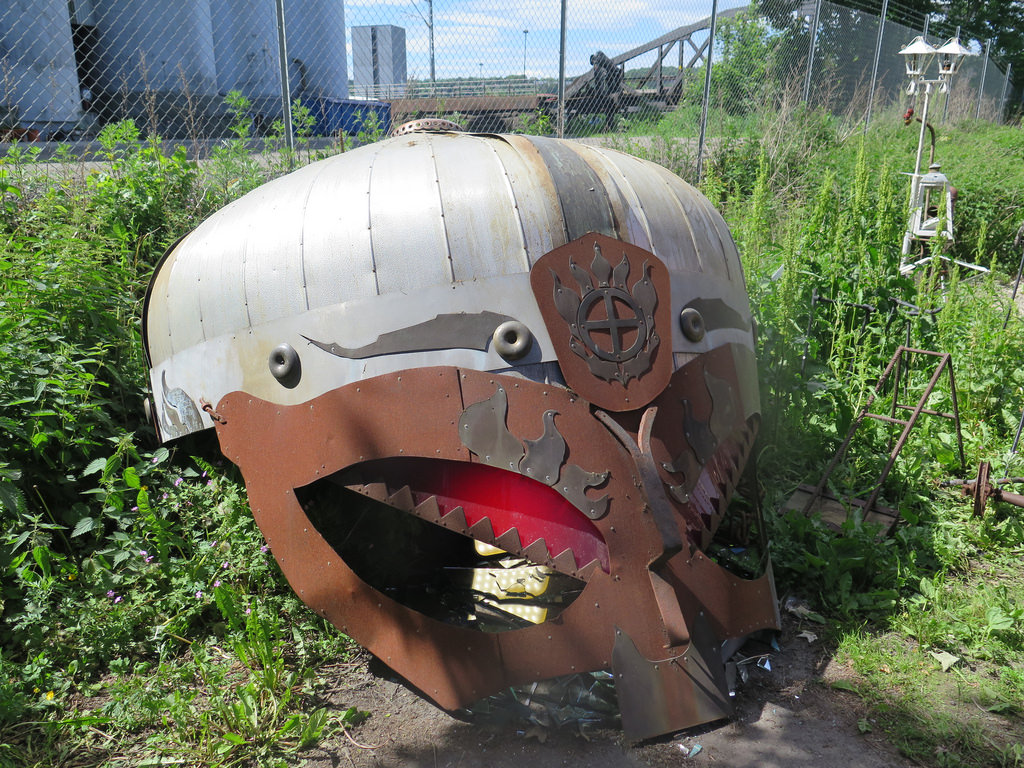 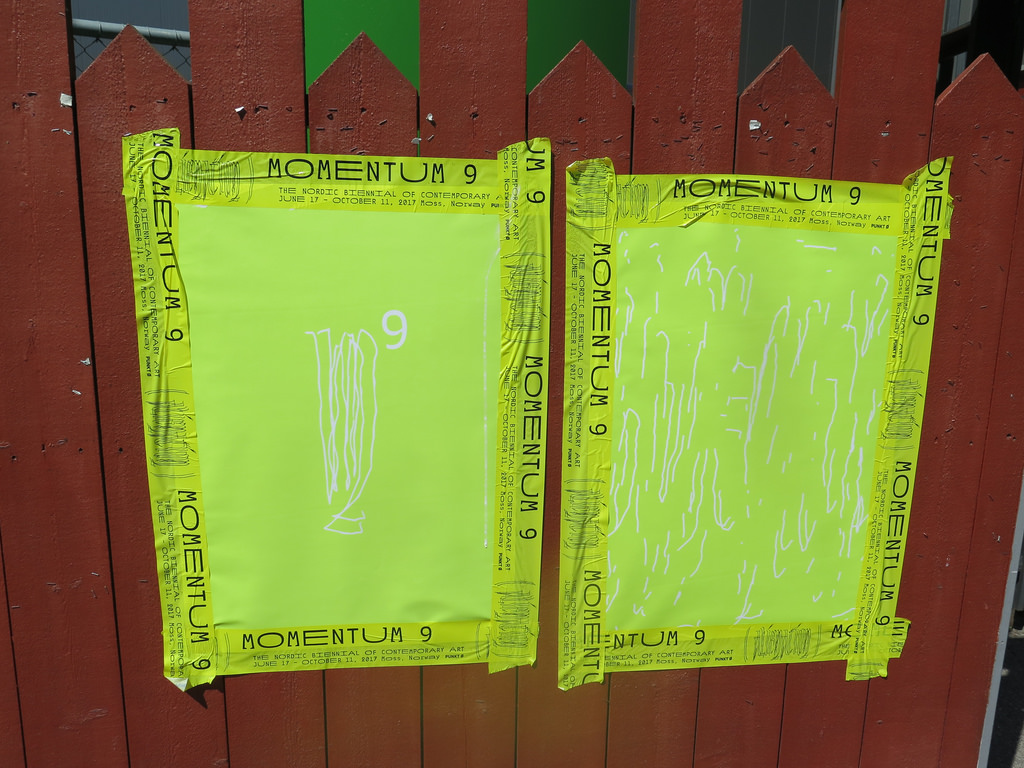