I already mentioned the exhibition Strange Weather: Forecasts from the future in a number of posts (in particular this one which focused on clouds) so i won’t bore you with repeating myself too much. The artworks on show invite the public to think about today and tomorrow’s weather with the gravity that befits the topic but also with lightness and humour, asking questions such as:

Should human culture be reshaped to fit strange weather or should we reshape weather to fit our strange culture? Who is going to take advantage of climate chaos and how will strange weather benefit me? How will you choose to work, celebrate, live and die when weather gets weird?

Since so many pieces in the shows got my attention, i thought i should write on last post about Strange Weather. This one will include plastic flowers modelled on the alien species that have started to invade the Arctic, an instrument that monitors ‘space weather’, HazMat Suits for kids and more. 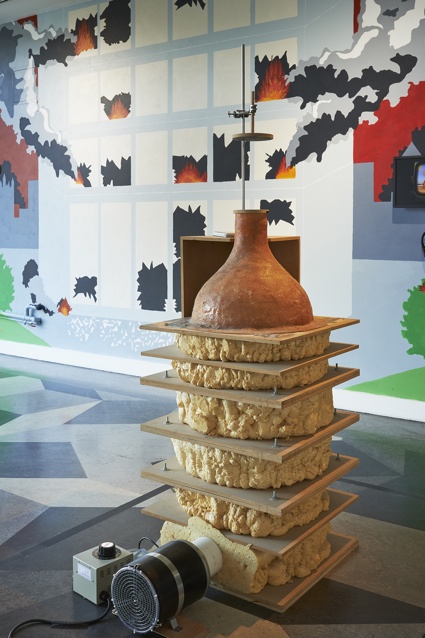 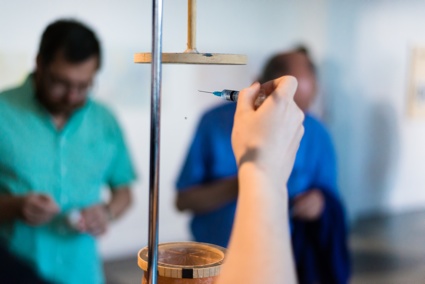 Inspired by a machine invented in the 1970s by two physicists from the University of Manchester, Alistair McClymont built a machine which sole purpose it to allow a drop of water to float mid air.

The Raindrop machine works like a mini open wind tunnel and it is both a continuation of the scientists original experiment and an artwork exhibited in a very different cultural context. 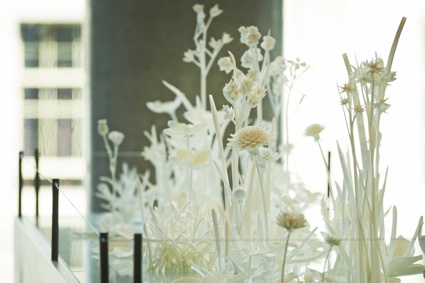 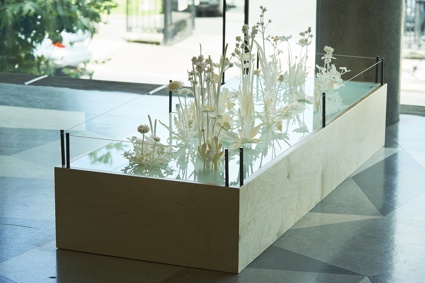 Scientists and ecotourists visiting the Arctic are bringing in thousands of seeds that were attached to the sole of their shoes or are falling off from their pockets. It wasn’t a problem until a few years ago but temperatures are warming up and the seeds are now taking root, potentially disrupting the ecosystems.

Tania Kitchell ‘s Occupy II is a representation of alien and invasive plant species that have been sighted in Arctic regions.

In Occupy II the plants are made of ABS plastic that have been formed with 3D modelling software and formed on a 3D printer. Photos were used as references to reproduce plant forms; there is an intentional disregard for a precise likeness as sizes and proportions are not adhered to, but there is a strong connection to the existing plants.

Does this disconnect between perception and reality in any way parallel our misconceptions about the Arctic?

This was one of my favourite works in the show. It is simple and elegant. Yet, there is something slightly disturbing in this assembly of 3Dprinted plants. Even before you even read the text that explains what they represent. 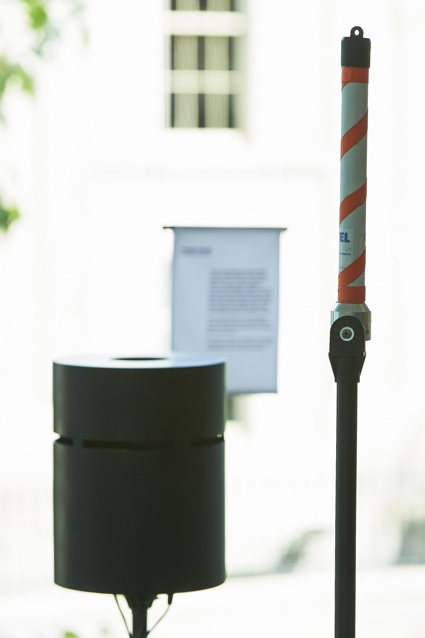 The Solar Wind Aeroscope is another subtle, unassuming but fascinating work.

Jonas Hansen and Lasse Scherffig built an instrument that monitors ‘space weather’, the environmental conditions created by the Sun and the solar wind and that ultimately influence our own atmosphere.

The system relies on global network of amateur HAM-radio stations known as WSPRnet to measure radio signal range. The signals from this network can travel for thousands of kilometers, by bouncing off of the ionosphere. Because the ionosphere and its reflectivity is affected by the solar wind, the activity of the WSPRnet echoes space weather conditions.

By monitoring radio signals and their origin, the Solar Wind Aeroscope can ‘see’ the current atmospheric conditions caused by the solar wind. To make these measurements perceptible, the instrument translates the solar wind into actual wind–transforming the gallery into a terrestrial weather station for extraterrestrial weather. The effect is actually very subtle, you need to place your hands on the Aeroscope to perceive the strength of the wind. 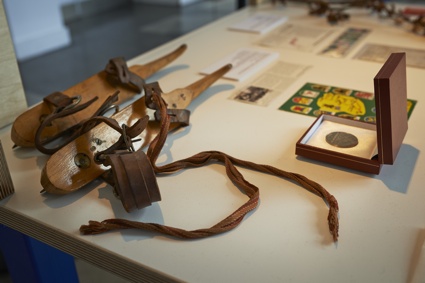 Jodi Newcombe and Tega Brain, Archive of Old and New Events’. as part of STRANGE WEATHER at Science Gallery at Trinity College Dublin 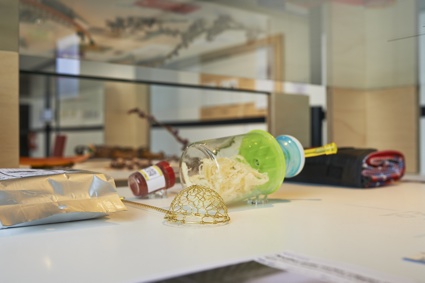 Jodi Newcombe and Tega Brain, Archive of Old and New Events, as part of STRANGE WEATHER at Science Gallery at Trinity College Dublin 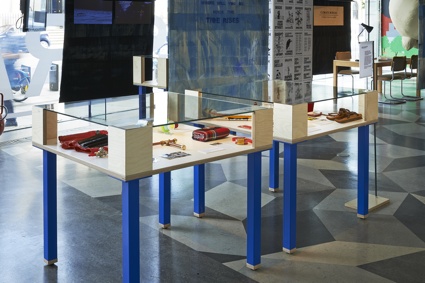 Jodi Newcombe and Tega Brain, Archive of Old and New Events, as part of STRANGE WEATHER at Science Gallery at Trinity College Dublin

Archive of Old and New Events, by Jodi Newcombe and Tega Brain, imagines what festivals and gatherings will be like after climate change has seriously messed up with the seasonal cycles and local climate conditions that were at the origin of these revelries. Strange new cultural phenomena could take their place.

This speculative project, set in 2030, brings side by side two collections; The Collection of Lost Festivals holds materials from events that have fallen into oblivion. The other is The Collection of New Festivals which documents recent cultural phenomena that have emerged in response to new weather and climate.

How could anyone not covet these stunning ‘Toboggan shorts’ worn by 2028 race winner worn for the 5th Ave Toboggan Race in New York City: 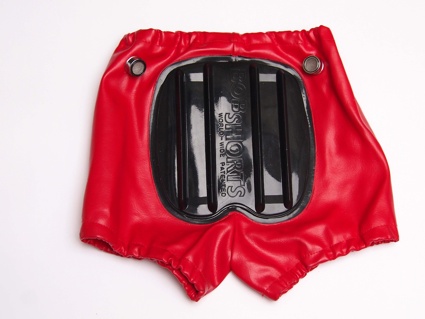 Or this container of dried jellyfish snack that will be a staple of our diet when jellyfish overpopulates seas that are getting increasingly warm. 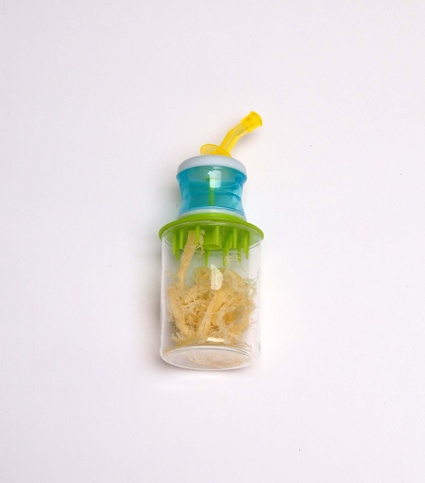 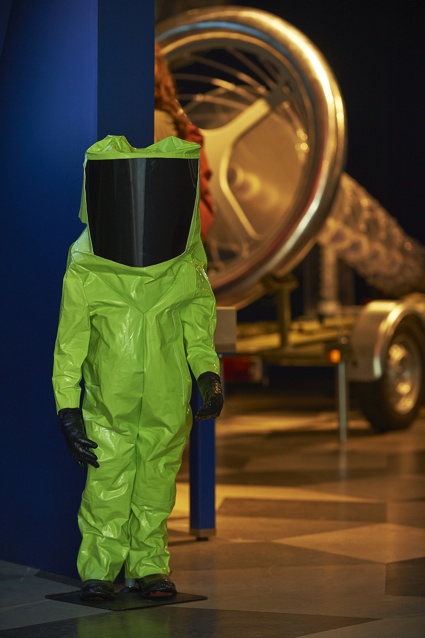 The corporation DuPont patents their Tychem cleanup suits for hazardous materials, these outfits are used in petroleum industry disaster response to mitigate ecological disasters. Cleanups are thus conducted with the same materials that potentially harm us. Marina Zurkow hand-sewn little HazMat suits for children. These suits, however, are sealed to prevent them from ever being worn by a child. 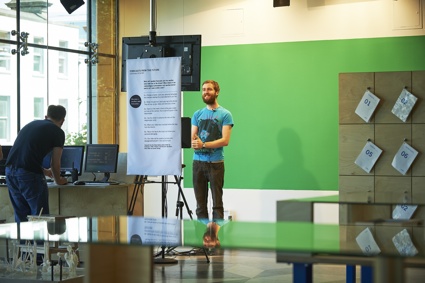 CoClimate invited artists and scientists in STRANGE WEATHER to produce scripts about what weather forecast will be like in the future. And then they had the brilliant idea of installing a fully functional weather forecast set, complete with green screen, teleprompter and camera. Visitors are invited to step in and play the television weatherman, recording the futuristic forecast of their choice and share it on YouTube if they want to. 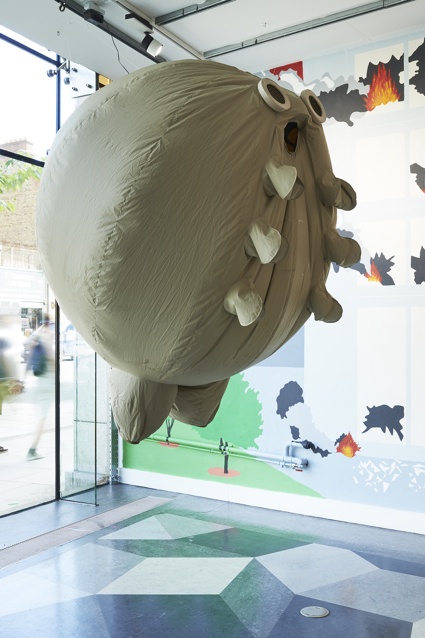 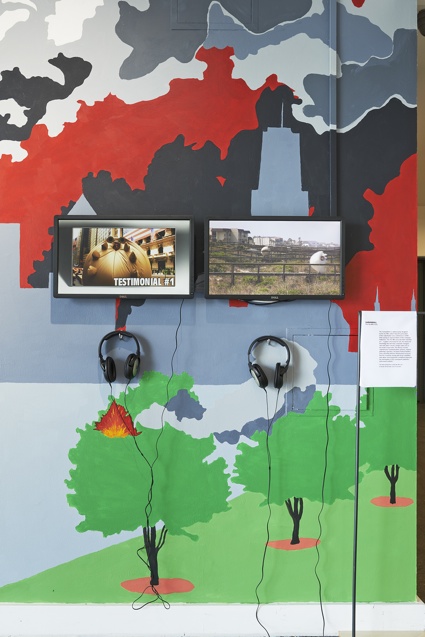 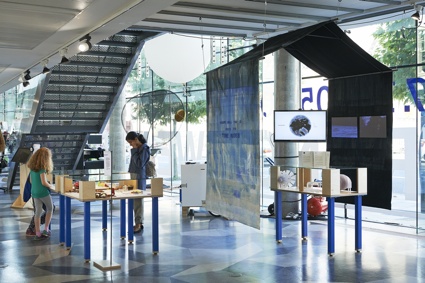 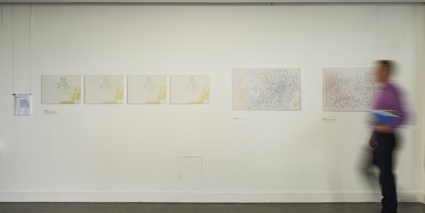 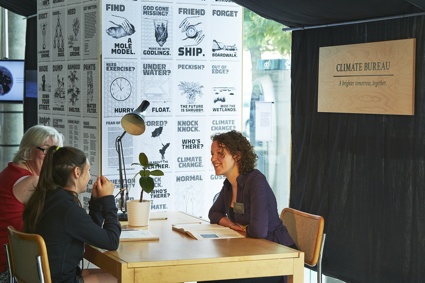 Strange Weather: Forecasts from the future was curated by artists Zack Denfeld, Cat Kramer from CoClimate and meteorologist Gerald Fleming. The show is open at the Science Gallery in Dublin until 5 October 2014.

Previously: Strange Weather: into the clouds, A People’s Archive of Sinking and Melting and The Tornado diverting machine.