On Saturday i went all the way to the Stanley Picker Gallery , that’s in Kingston and Kingston is in zone 6! I had never ventured beyond zone 3 before. Apart from the endless Piccadilly line trips from Finsbury Park to Heathrow airport and back, of course. But i’d travel the globe for a good show about sound art. And Sound Matters: Exploring Sound Through Forms is not only very good: it is impeccably curated (there isn’t one weak work and each piece is acoustically insulated from the neighbouring ones), seducing and has a clear and simple concept as it explores the physicality of sound by looking at the connections between contemporary craft practice and sound art.

The added bonus for me are that i’ve discovered a couple of interesting artists and designers. 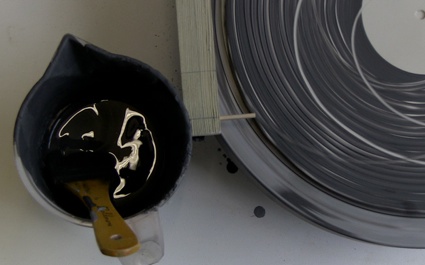 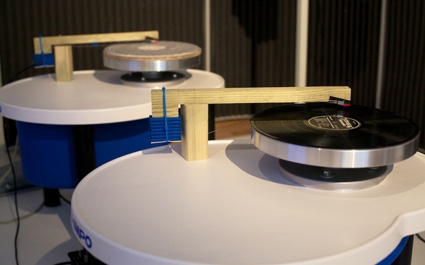 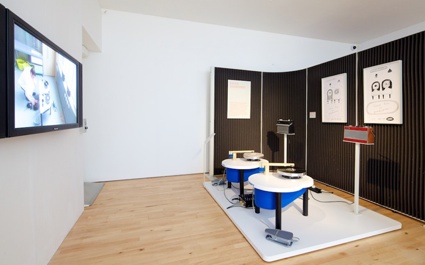 Performance ceramicist (surely this term exists, right?) Keith Harrison noticed that potter Lucie Rie had the same Roberts radio in her studio as he uses in his own studio. His other sources of inspiration were her potter’s wheel and her use of manganese slip. Lucie Rie vs Grindcore are two potter’s wheels customized to become a set of turntables which Harrison then connected to two transistor radios. A grindcore metal record is played on one deck, a raw clay one covered with a layer of manganese is played on the other deck.

The resulting sound might or might not be to everybody’s taste but visually, the installation and performance (at least the one i saw in the video) are stunning. 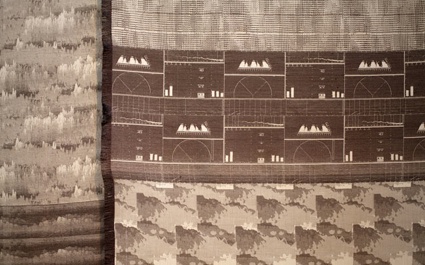 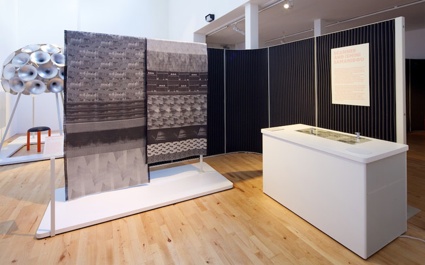 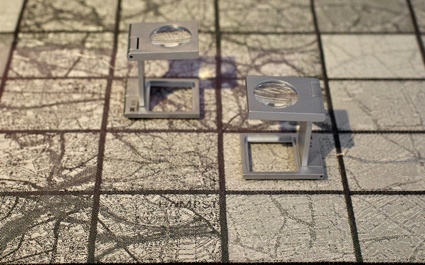 Textile designer Ismini Samanidou collaborated with sound artist Scanner to explore a shared interest in mapping, the physicality of code as well as in the visual and technical similarities between the softwares they both use. The larger of the two Weave Waves textiles they created visualize the artists’ own breath. The recording of their breathing was processed through a software and the data was then translated it into a digital jacquard weave design. The other, smaller piece used a software to map the loudest areas of London and Manchester. The details of the fabric structure and the interpretations of the cities can be explored through magnifying devices. Meanwhile, the soundscapes, recorded on the locations, also become audible. 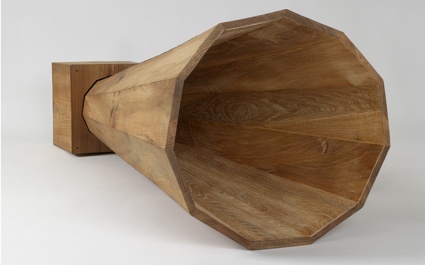 The Owl Project‘s 9 Volt Sound System is a large horn speaker system that you can attach to your device (preferably the Logpad or any Owl Project instruments) via the audio jack slot.

The wooden horn uses the geometry of the hendecahedral (that’s 11 sides) horn shape to naturally and spectacularly amplify sound. The shape of the horn is designed using vector maths and Owl Project’s bespoke software, Bevelator78.4˚, to calculate the cutting angle between horn planes. 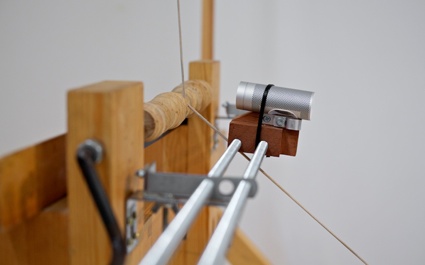 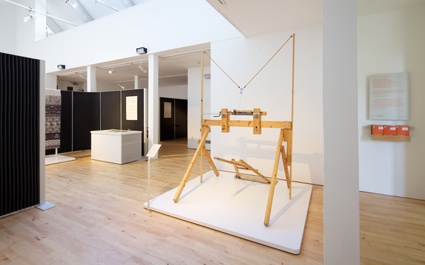 Owl Project had another work in the show: the rather ingenious Sound Lathe, an instrument based on a traditional green wood turning pole lathe that explores the relationship between the crafting of physical objects and the shaping of sound. During the performances, the movements are turned into electronic music. 8 sensors rest on the turning spindles and translate its changing profile shape into data which is then converted into sounds. At the end of each live demonstration, a unique wooden object is produced that will preserve a memory of the performance. 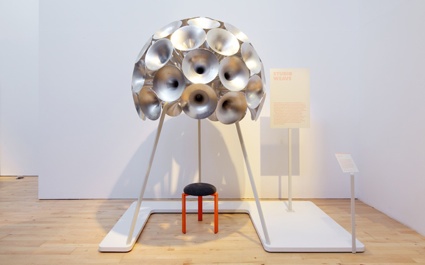 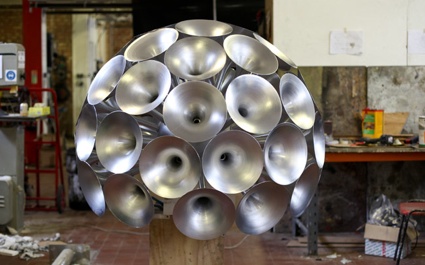 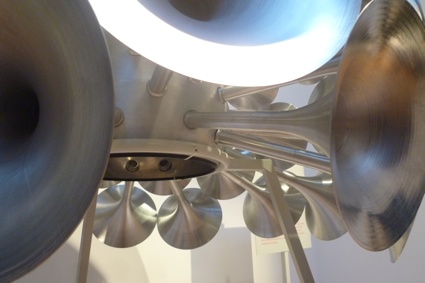 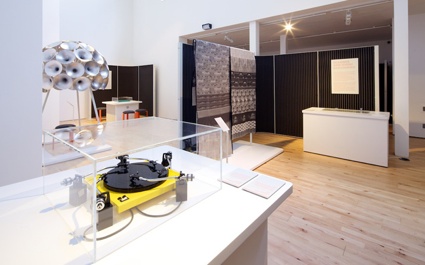 Studio Weave‘s Polyphony functions as a large compound ear that separates, abstracts and re-organizes the sounds coming from multiple directions through listening horns. I was alone in the very quiet gallery so i didn’t really get a good feel of the installation. However, i’m glad the exhibition gave me the opportunity to discover the works of Studio Weave. Do check out their portfolio, it’s an impressive one. 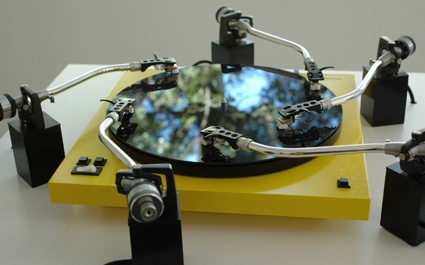 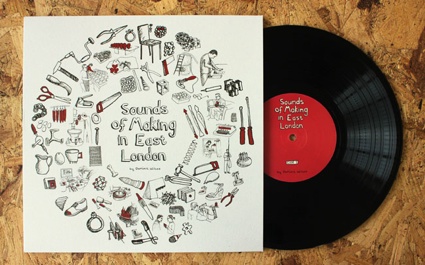 Sounds of Making in East London is a 10″ vinyl record that celebrates the work of the 21 of the many skilled makers who live and work in East London. The record captures sounds as diverse as the clatter of lyric poet John Hegley’s typewriter, the chopping of garlic in a Michelin star restaurant, the tap of rock ‘n’ roll cobbler Terry de Havilland’s hammer and the sound of a bell being tuned in Britains oldest manufacturer.

Wilcox later asked Yuri Suzuki to create a new sound work inspired by Sounds of Making in East London. The young artist selected a few tracks and mixed them. The resulting record was pressed with loop grooves (the tracks continuously repeat) which allows various points of the record to be played simultaneously on Suzuki’s Prepared Turntable, a device that allows music to be played by 5 tone arms with individual controls. The ensemble creates an overall soundscape that further interprets the energy of East London’s makers. 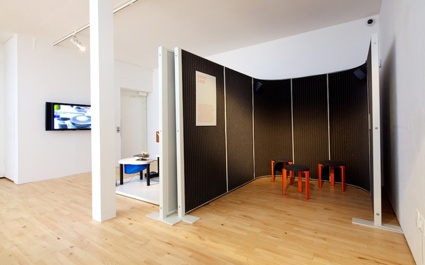 The voices and sounds in Tweed were recorded in the Outer Hebrides, remote islands off the North west coast of Scotland. The first voice, of weaver Catherine Campbell, was recorded in her weaving shed and shop in Plocrapool, on the east coast of Harris. The next voice was recorded in a weaving shed near Callinish on Lewis in 1998 as the weaver was demonstrating how to work on the Hattersley loom (used to produce Harris Tweed since 1919.) In the background are voices and mechanical sounds from a mill at Shawbost as it was about to be sold. 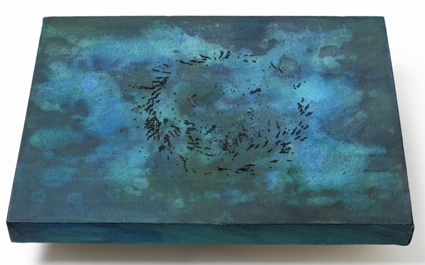 Max Eastley‘s steel and canvas sculpture is covered in tiny metal fragments animated by a motor fitted with magnets. The ongoing movement generates a subtle, quiet sound. Landscape was originally created to be installed within a Georgian fireplace, as an echo to the 18th century practice of placing a landscape-painted screen in the fireplace during Summer.

The gallery guide is online.

Sound Matters: Exploring Sound Through Forms, a Crafts Council Touring Exhibition, is at the Stanley Picker Gallery in Kingston until 23 Nov 2013.