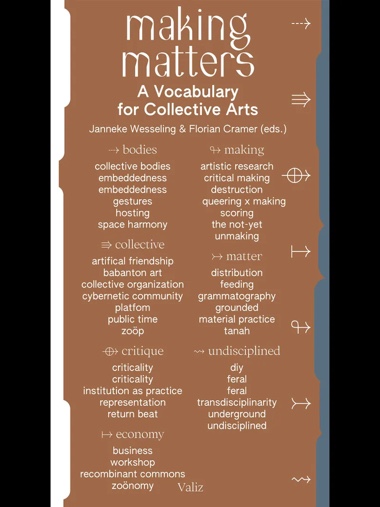 Making Matters formulates the importance for artists of working as collectives, especially if they hope to address meaningfully crushing ecological and social problems.

Joining a collective often means allying with other disciplines, multiplying tactics and approaches, playing with formats of work, organisation and distribution and taking on multiple identities, such as researcher, community activist, curator, computer hacker or business consultant. In fact, the osmosis between the various roles and outcomes of the collaborations might be such that an art practice becomes almost indistinguishable from a way of living. 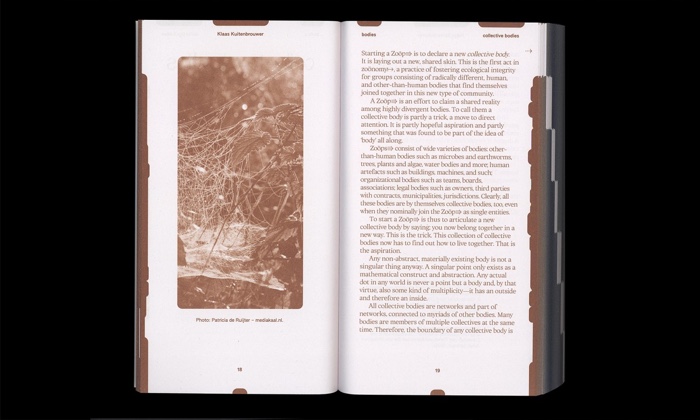 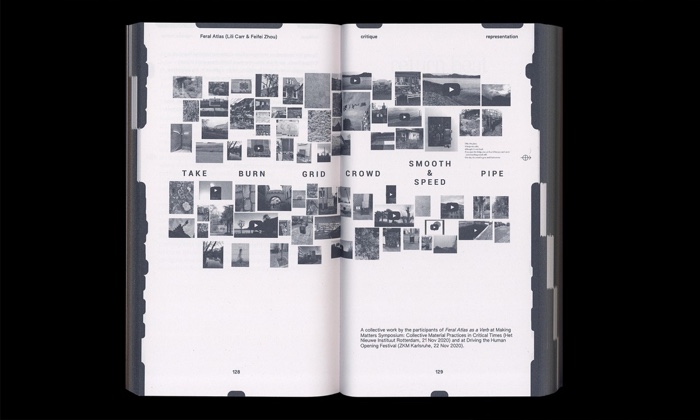 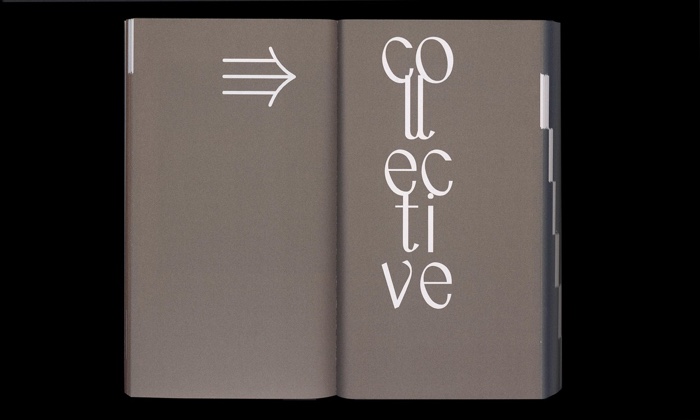 Some of the most interesting entries (for me) include the ones below:

Frans-Willem Korsten uses a recent conflict between real estate developers and a collective of citizens as an entry point to discuss the importance of transparency, research and criticality (which he describes as the full awareness of a situation, of what is at stake) when fighting in a forcefield dominated by others.

Kate Rich has an insightful text describing how business is a term that goes unexamined in the arts and humanities. Drawing on the writings of Martin Parker and Matthew Manos, she calls for an insurgent entrepreneurship that could be critical, experimental and refocused towards meaning-making rather than market-based success. An example of such experimental business is her Feral Trade project that operates like an international shipping company but without employees, vans and other traditional facilities. Instead, it functions as an underground freight network that relies on social networks to carry goods from one side of the planet to the other, often in the suitcases of artists returning (or going to) a residency or festival. As she writes, this type of artist-run grocery business is an example of working and living in the cracks and as such, it might better respond to the challenges posed by our troubled planetary relations.

Dani Ploeger‘s essay describes the destructive processes at the core of capitalism. He calls for creative acts and technologies of unmaking that would sabotage the mechanisms of capitalist production and consumption. Hackers and Designers, a collective working with and promoting the use of self-made, appropriated, co-evolving and hacked tools and systems question the term “platform” as most of us use it. Anja Groten reconsiders the workshop format that has been co-opted by innovation labs and creative agencies and turned into yet another nicely packaged product.

The entries in the book are hit-and-miss for me. Some got me very enthusiastic. Others had me stop, ponder and search online for more information. A few left me quite cold. Overall, I do applaud the way some of the authors in the book identify hypes, buzzwords, failures at enacting radical ideas and are generally critical towards art practices that claim to be critical themselves. Robust self-scrutiny shouldn’t be a luxury these days.

* If you don’t know Valiz already, do check out their website. They are an independent international publisher of contemporary art, theory, critique, design and urban affairs. Their catalogue contains a few gems. I reviewed one of them a few months ago: Caps Lock – How Capitalism Took Hold of Graphic Design, and how to Escape from it.