I discovered Theo Triantafyllidis‘ work while reading my favourite game art blog but I experienced it for the first time a couple of weeks ago at the opening of Radical Gaming at HEK (House of electronic Arts) in Basel. I haven’t stopped talking about his Pastoral installation ever since. As soon as I was back home, I booked a train to Milan to see his solo show at the NOVO gallery. 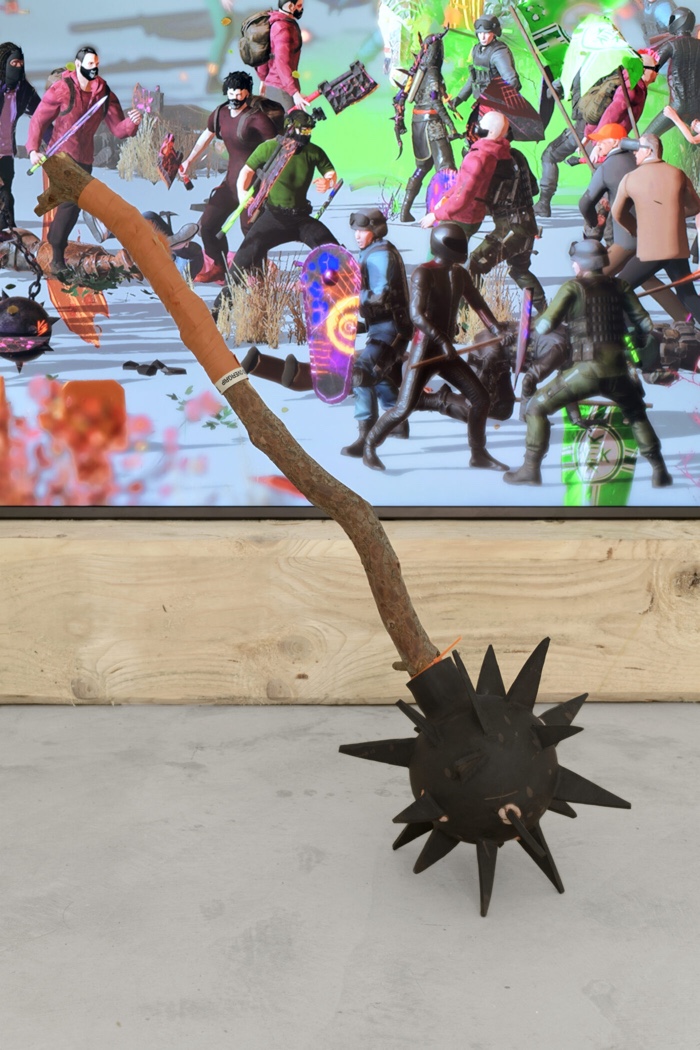 Even the name of the exhibition is intriguing: Radicalization Pipeline. The title is a reference to the theory that YouTube is an engine of socio-political radicalization. “A significant amount of commenting users systematically migrates from commenting exclusively on milder content to commenting on more extreme content,” the authors of a research published in 2020 wrote. 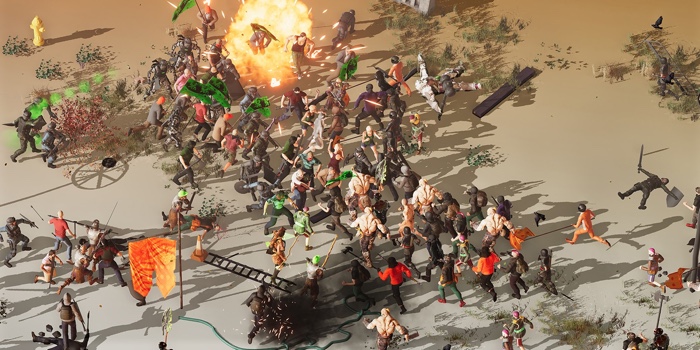 Radicalization Pipeline, the live simulation audiovisual work at the center of the exhibition, portrays radicalised people as they furiously throw weapons and blind hatred at each other. The video, dense in action, swarming in characters and constantly regenerating is pell-binding and disorientating. It also escapes any attempt to be fully absorbed. A bit like the endless stream of bad news, trolling and conspiracy theories that assaults us every day.

Most of the figures in the melee are familiar: white nationalists brandishing KEK flags, the usual Medieval warriors, fantasy creatures out of World of Warcraft, police officers wearing helmets and bulletproof vests, anarchists wearing similar attire, MAGA-type maniacs, etc. Most of the characters are male. Because of the visual composition and darkness, I was reminded of Hieronymus Bosch’s vision of Hell. Because of the theme, I thought about the fetid alt-right. And indeed, the work draws connections between the world of fantasy and real events that happened in the US such as the invasion of the Capitol earlier this year and phenomena such as the rise of QAnon. 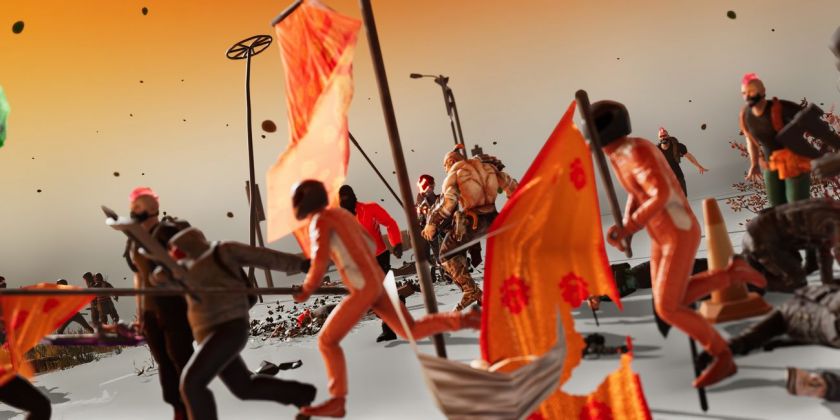 To be honest, I thought about the video several times over the past few days. When no masks/no vaccine people created disorder inside a church in Pescara (Southern Italy), when drivers were fighting over fuel at a petrol station in the UK or any time i see the social media comments that accompany every single apparition of French far-right polemicist Éric Zemmour on TV. Can this type of brutality reach new levels in the coming years? Am I getting paranoid? Radicalization Pipeline, however, is never as gloomy as my vision of the future. Some of the figures are quite grotesque, others are incongruous (did I see pink furies?), even the soundscape conceived by sound creator Diego Navarro manage to enlighten the atmosphere here and there. 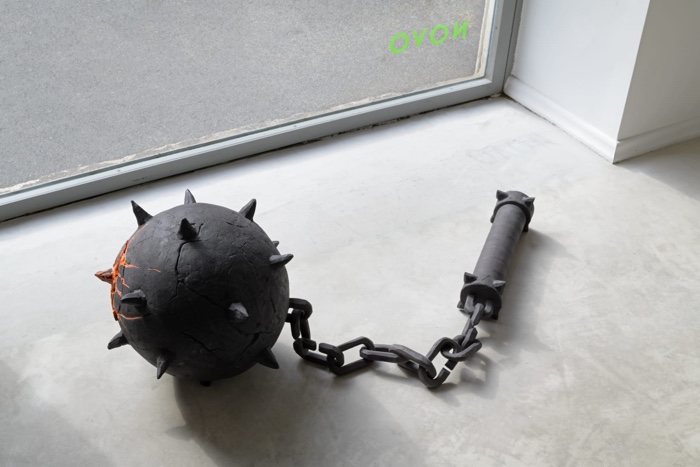 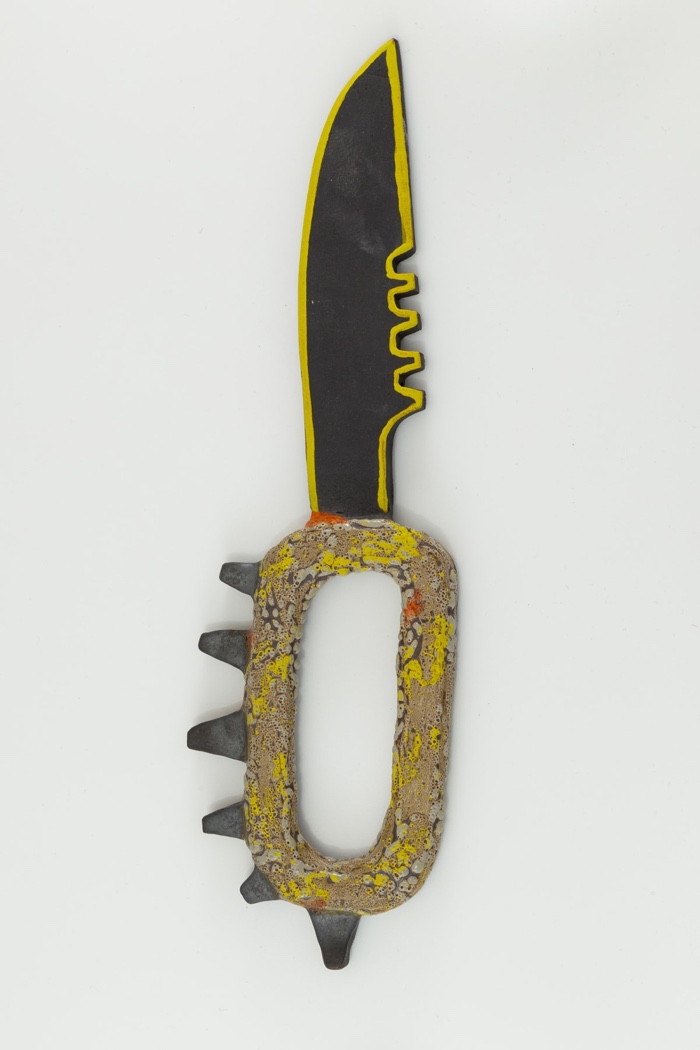 Some of the weapons that the characters in the video are swinging around have been recreated in ceramic. The glazed stoneware pieces are a strange mix of craft, DIY and industrialised commodities. They look amateurish and are reinforced with more sophisticated materials such as tennis overgrip tapes and pieces of laser-cut acrylics. The names given to the ceramic weapons include Chadslayer, Normie Slicer, Anprim Talon, Snowflake Skorcher and Soyboy Shredder. This type of vocabulary echoes the rage found in incel forums, far-right chats, black bloc groups, the manosphere and other rancid circles.

Theo Triantafyllidis builds installations and experiences where the virtual and the physical dialogue with each other. He’s not the first artist who attempts to establish this kind of alliance. He is certainly one of the very few who blends both worlds in a way that is exquisitely natural, poetical and full of humour. His works are also deeply anchored in today’s socio-political preoccupations. Add to the picture that they are visually seducing. Very very seducing. I’m a fan. 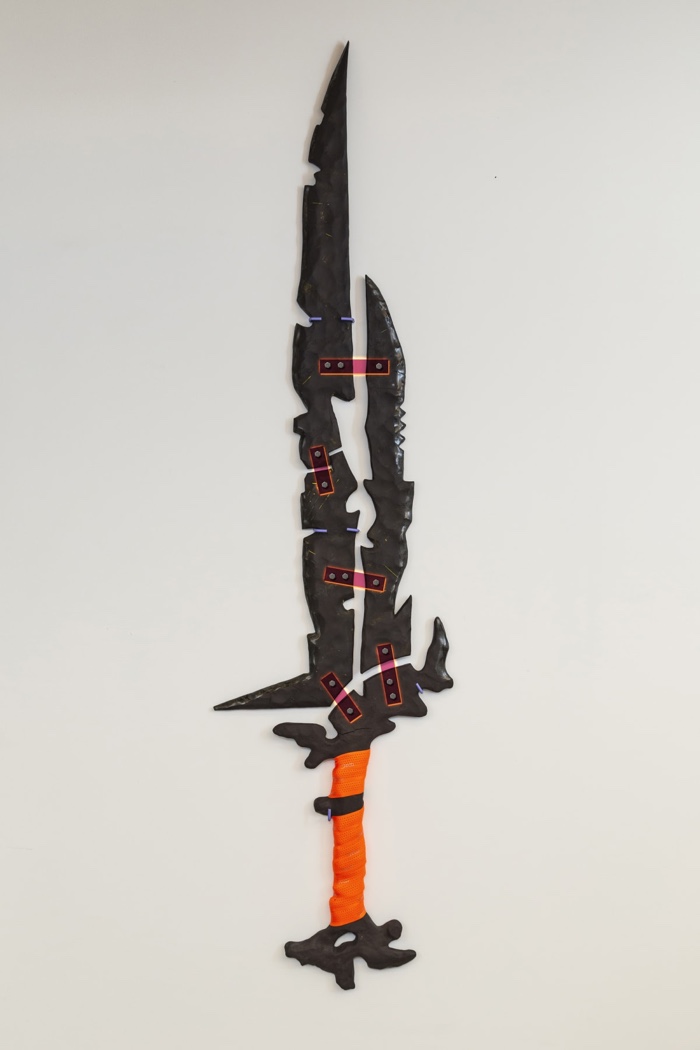 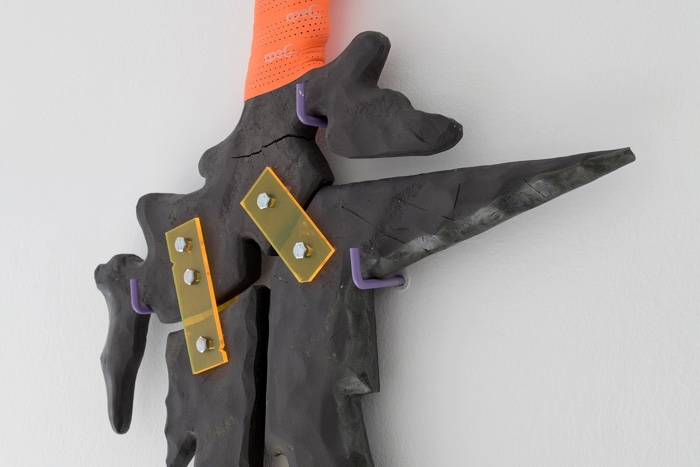 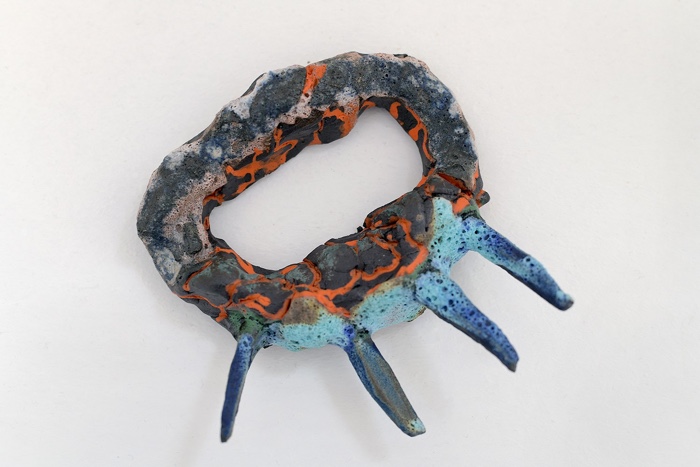 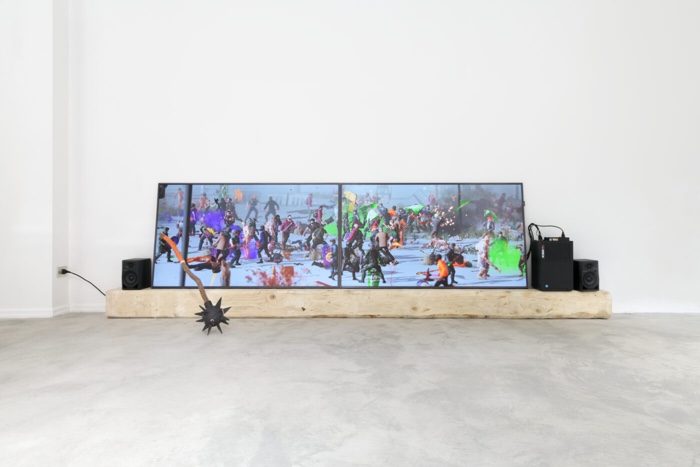