In April 2017, Baltan Laboratories organized Economia: a festival about the economy without the economists. I wrote about it extensively and enthusiastically. During 3 days, at Baltan Lab in Eindhoven, artists, philosophers, writers, historians, film makers and even a professor of geology demystified the economy and shared their thoughts on how we can work together to shape new economic realities. 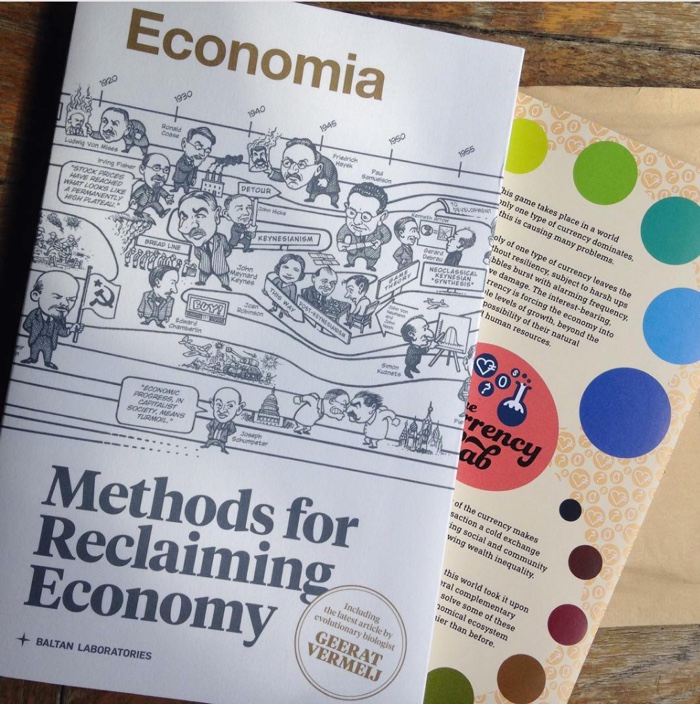 Economia: Methods for Reclaiming Economy, a booklet edited by curators Olga Mink & Wiepko Oosterhuis, contains essays and images that builds upon some of the ideas and lines of inquiry explored during the festival’s many debates, keynotes and performances.

The texts in the publication are articulated around 3 main threads:

The first one, Economy as a Playful Construct, looks at economy through an artistic lens. I particularly enjoyed reading Brett Scott encouraging us to uncover and subvert ingrained (but not immutable) power dynamics of the financial sector. Lenara Verle wrote a very brief text to present The Currency Lab game, a board game that invites you to become currency designers. You can print and play it using any black & white or color printer. Her essay also mentions a nifty little companion booklet for the game that contains examples of contemporary and historical alternative currencies.

The second section, Economy as a Biological Construct, is the most fascinating one. UBERMORGEN draws parallels between bitcoin mining and the production of red blood cells in the human body. Geologist Geerat Vermeij wrote a wonderful essay on the need to cultivate a healthy economy based, not on continued growth, but on a symbiosis with the common good of humanity and the rest of life on our planet.

The last group of texts, Economy as a Social Construct, has social relationships and individual impacts at its core. The two texts i’ll highlight here are by Josef Bares and by Nick McHuigan. Bares uses his work Consumption. Hong Kong. Volume I to question the efficacy of dollar voting. McHuigan, founder of the Accountability Institute, investigates the role that accounting metaphors are playing in society and calls for a language that would reflect a more holistic vision of reality and take into consideration the effects economy is having on environment and society.

Economia: Methods for Reclaiming Economy features many more artists, thinkers and scientists contributions. You can order a copy by visiting this page. I wish there was also an option to download the booklet as a PDF as it would probably mean that more people get to read it. Economia: Methods for Reclaiming Economy won’t revolutionize the economy by itself but by proposing alternative point of views and reasoning, it certainly provides readers with food for thoughts and a desire to start conversations that go far beyond the usual rant about capitalism and why it sucks.

I’ll leave you with two videos from the festival. One of Frank Trentmann explaining how comsumption came to play such a central role in society. That was my favourite keynote from the Economia Festival:

Frank Trentmann, A world of consumers

And here’s my favourite artist talk: Jennifer Lyn Morone, ‘the girl who turned herself into a corporation’.

Previously: Economia, a festival on economy without the economists, Economia Festival. Consumerism, crabs, automation, and other insights by non-economists and Economia festival: short films about finance.
Image on the homepage: Jennifer Lyn Morone, Inc, via.