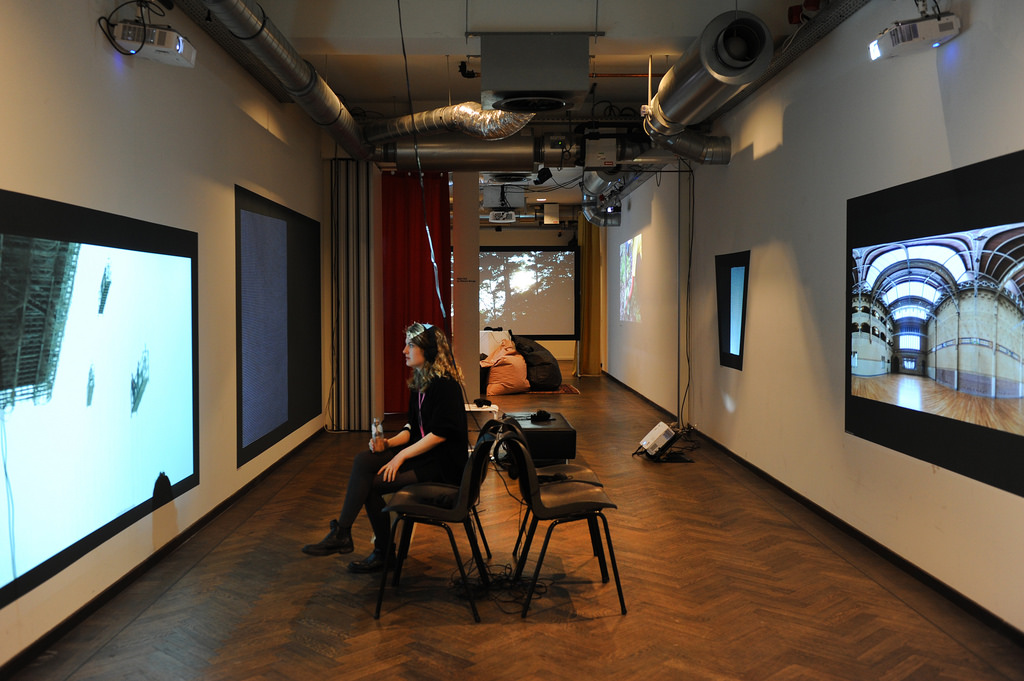 A couple of weeks ago, Baltan Laboratories invited artists, philosophers, scientists, film makers and members of the public to join the Economia festival in Eindhoven. The only thing the participants had in common is that none of them would have described himself or herself as an economist. That and the fact that they had plenty of provocative and thought-provoking ideas to share about the economy. Unsurprisingly, our current economic system took quite a beating over the course of the various keynotes, (on/off stage) debates and documentary screenings. The Economia festival, however, went beyond the critiques (we’ve heard them all before anyway!) and suggested new challenges and alternatives, new perspectives and hypotheses.

As curators Wiepko Oosterhuis and Olga Mink wrote: Why not start by treating economics like any other technology? Play with it, hack it, use input from other disciplines, unleash science fiction on it, approach it in an artistic manner. In short, take ownership so that we can reshape and rework economics as we see fit.

I’ve still got a lot to unpack, think and write about so expect more stories in the coming days. For now, let’s have a quick walk around some of the artworks and design ideas i discovered at Economia: 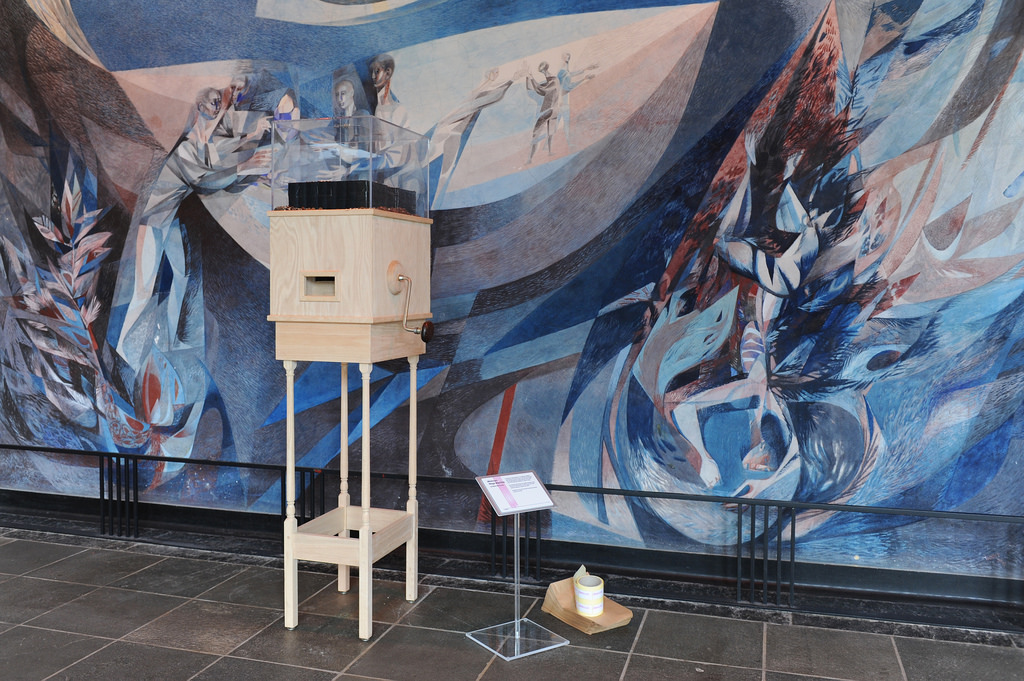 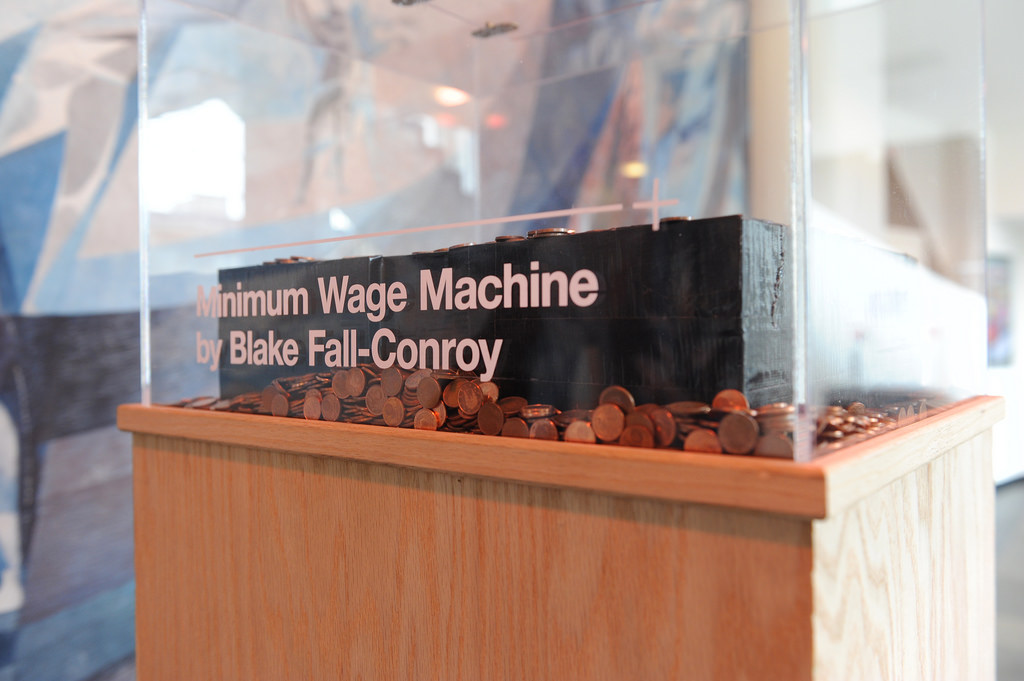 Perhaps the easiest to engage with, the Minimum Wage Machine allowed visitors to get a tangible, physical understanding of what it means to work for minimum wage. Turning the crank yielded a one cent euro coin every 4.018 seconds, that’s €8.96 an hour, the minimum wage in The Netherlands right now. The coins dropped as long as you turned the crank. I saw many people trying it. All of them stopped after the first few cents. You want to have a go because it’s a fun and straightforward installation but you quickly realize how depressing and mind-numbing routine work is.

In an interview with 1215 today, Blake Fall-Conroy discussed the irony of being repeatedly asked by galleries to exhibit his work for free.

Red Coin mining has made the People’s Republic of China the world’s largest Bitcoin producer. However, mining the cryptocurrency requires a lot of energy to power the hardware and to keep it cool. The first mining farms were built in Shanxi and Inner Mongolia where coal energy was cheap, but never as cheap as free water so most of the farms have now migrated towards the west of the country where China has been building hydropower plants.

“Both red blood cells and mining hardware consist of units that have a profitable life-span of about 4 months, they use vast amounts of energy, transport oxygen and as a result create, maintain and enable life in its various forms without maintaining any form of recognizable self-consciousness…” 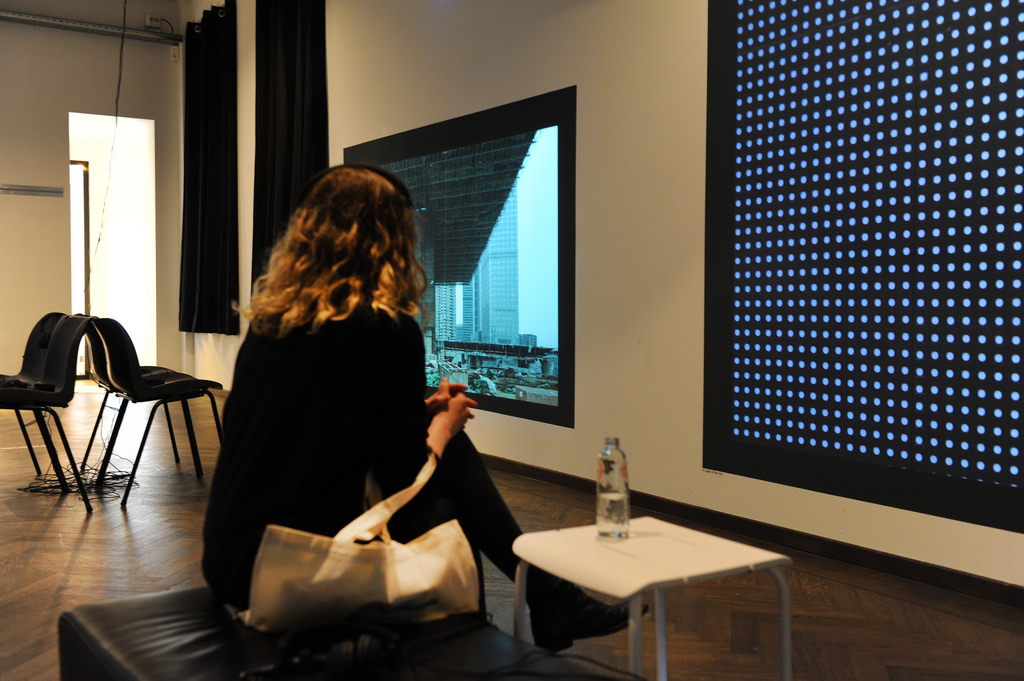 Zachary Formwalt, In Light of the Arc, 2013. Photo by Diewke van den Heuvel 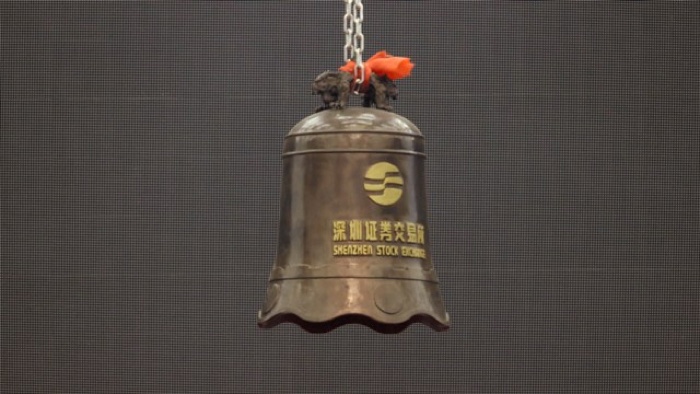 Zachary Formwalt, In Light of the Arc (video still), 2013 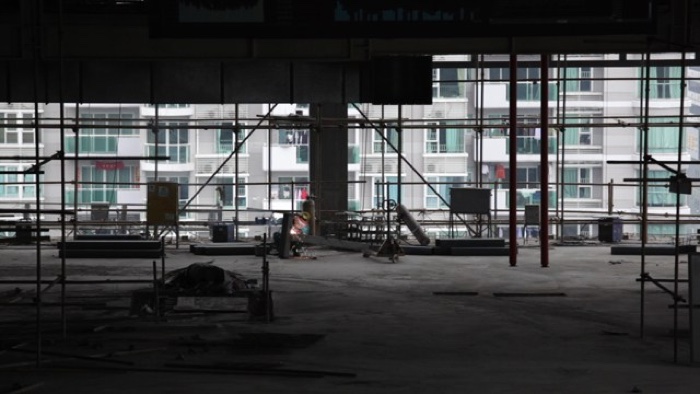 Zachary Formwalt, In Light of the Arc (video still), 2013

Zachary Formwalt’s video diptych In Light of the Arc, part of the installation Three Exchanges, is shot in China too but it takes us inside Shenzhen’s stock exchange when it was still under construction. Just like Red Coin, this video depicts a reality that is populated, powered and governed more by machines than by men. It is a world characterized by an increasing abstraction, by powerful activities that take place beyond the threshold of our human perception.

But while mining sites are often located in remote and sometimes even secret locations, the financial system needs its material infrastructure to be visible. The building of the Shenzhen’s stock exchange was designed by Rem Koolhaas and his firm Office for Metropolitan Architecture. The facade is your typical stern and futuristic skyscraper. The inside of the building reflects how much advanced algorithms have taken over the world of finance: the trading floor itself, with its iconic bronze bell, now serves only a ceremonial purpose. 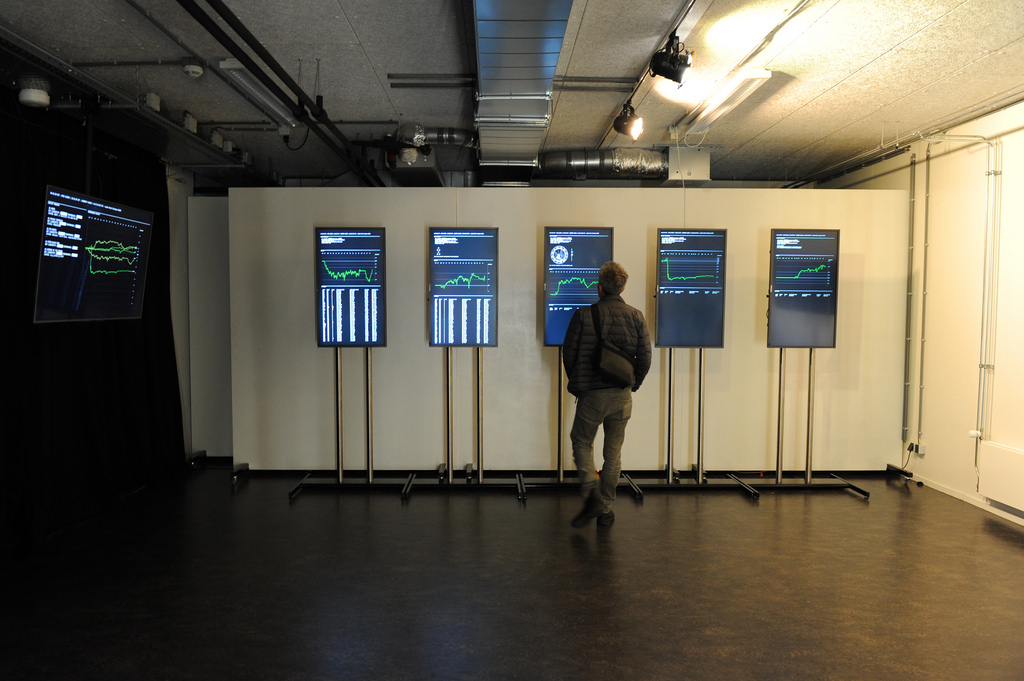 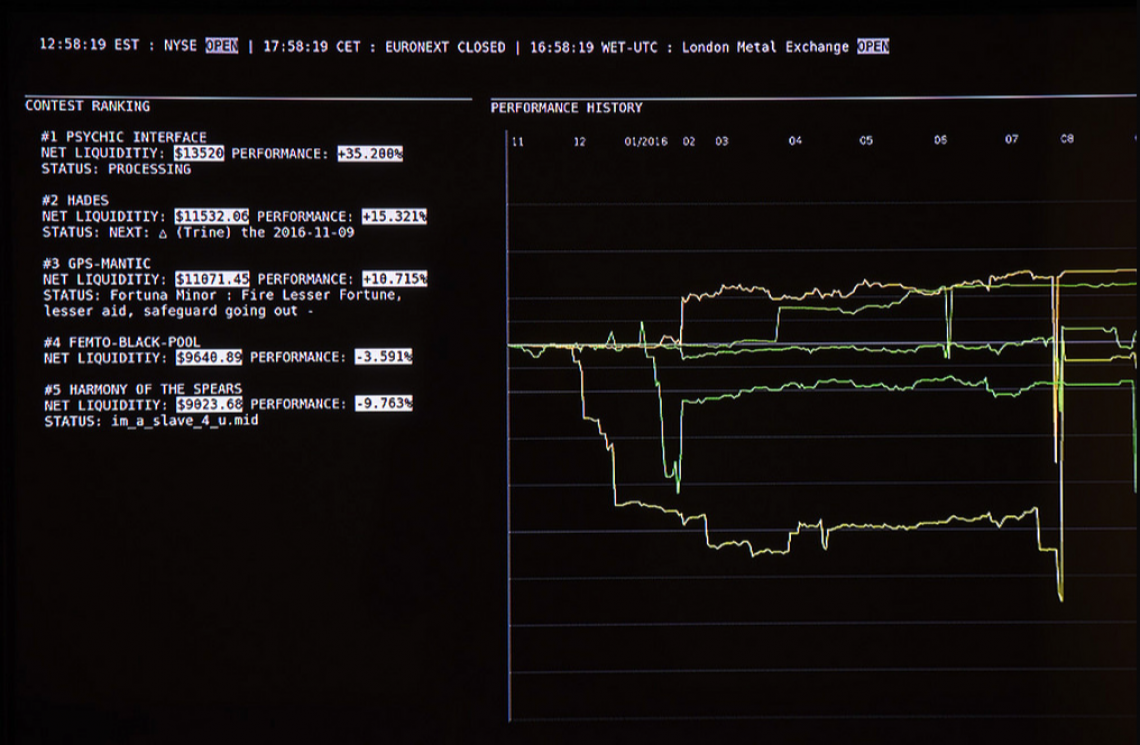 The work ADM XI further illustrates the de-materialization and abstruse logic that reign over the financial world. This collection of highly irrational trading algorithms was created by 10 artists to compete with each other in a marketplace provided by RYBN.ORG. The artistic trading algorithms hosted on the platform follow their own non mercantile logic: some attempt to produce an irreversible chaos, others try to influence the market prices to make it look like a geometrical shape, while others attempt to saturate the market with non human affects. Profits are no longer driven by the usual economic instruments, but rather, by living organisms – soil, plants, bacteria; by supraterrestrial rules – environmental, astronomical, astrological; or by non-scientific knowledge – esoterism, magic, geomancy, etc.
(i wrote about the project a few months ago.) 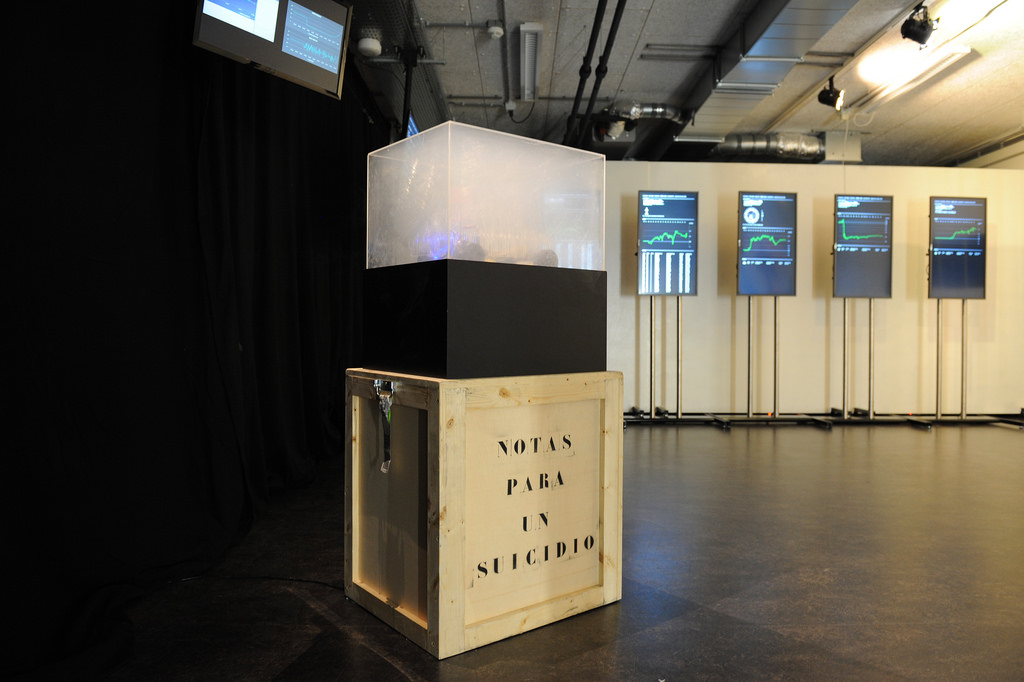 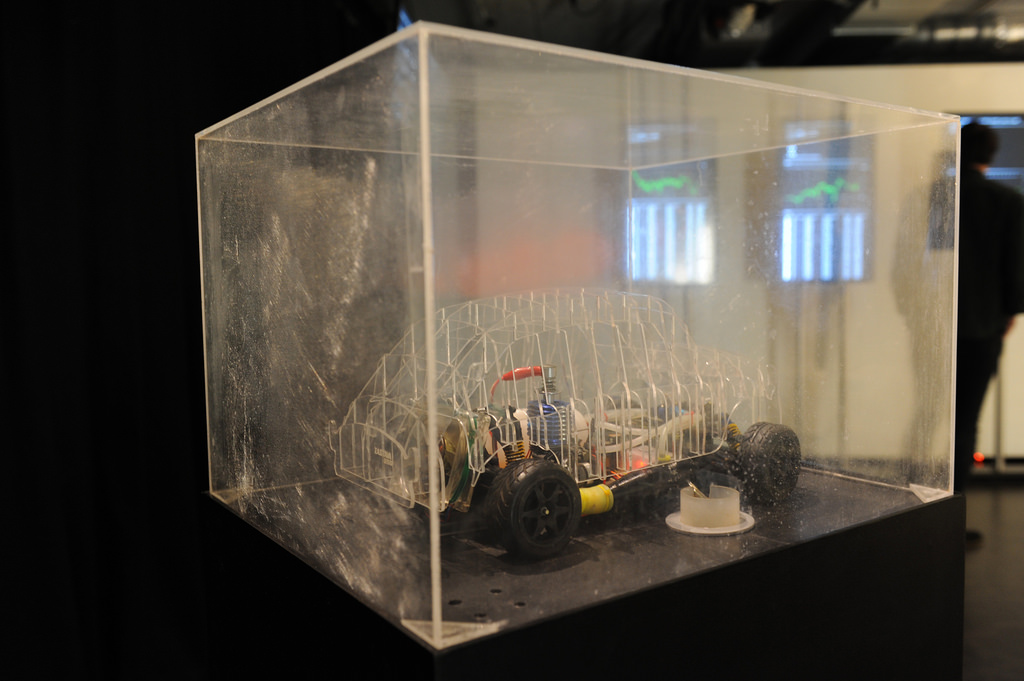 A small car inside a glass box. The vehicle accelerator is linked to real-time fluctuations of the international oil market. Depending on the movements of prices, the car will speed up or slow down emitting carbon dioxide accordingly, possibly creating an environment too toxic for the vehicle itself.

Notes on a Suicide lays bare the domineering position of data in nowadays’ society as well as its relationship with the key players in the economic field: technology and oil.

See it in action! 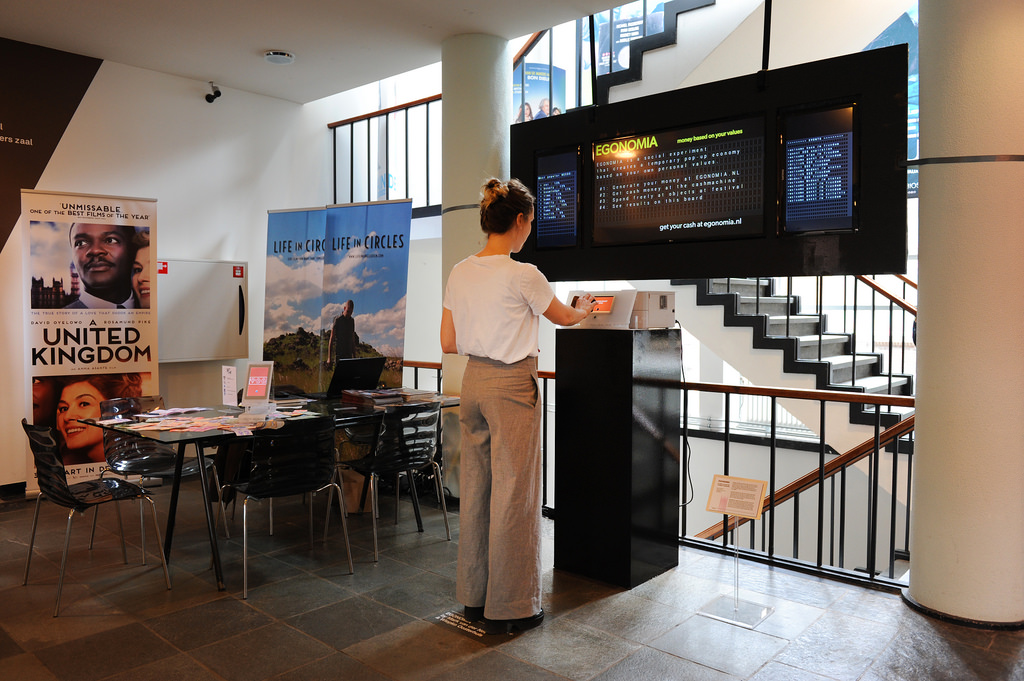 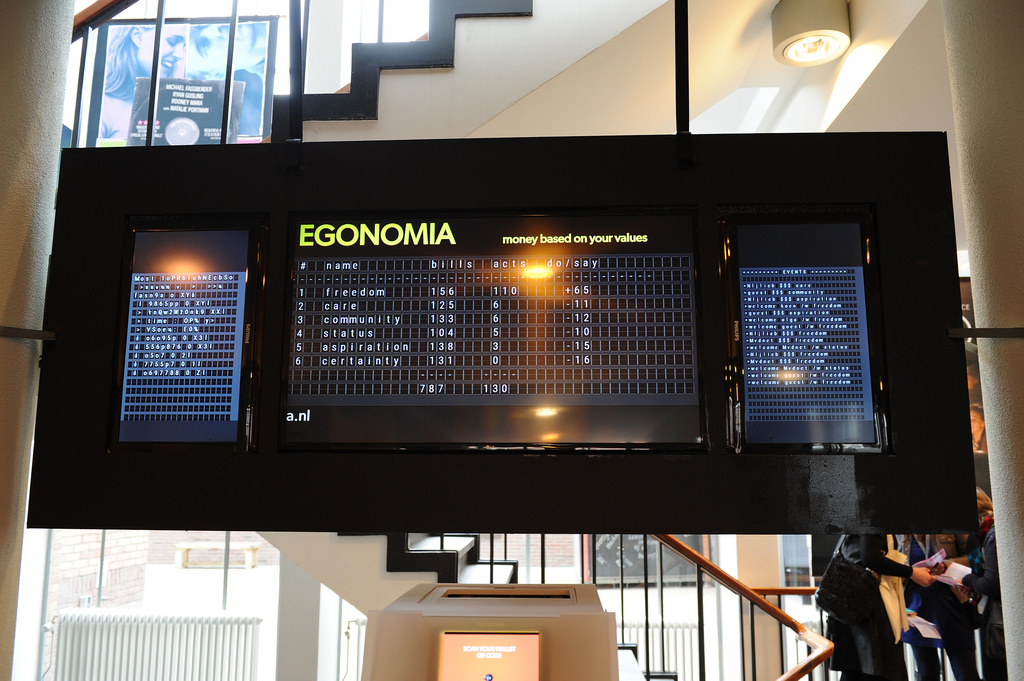 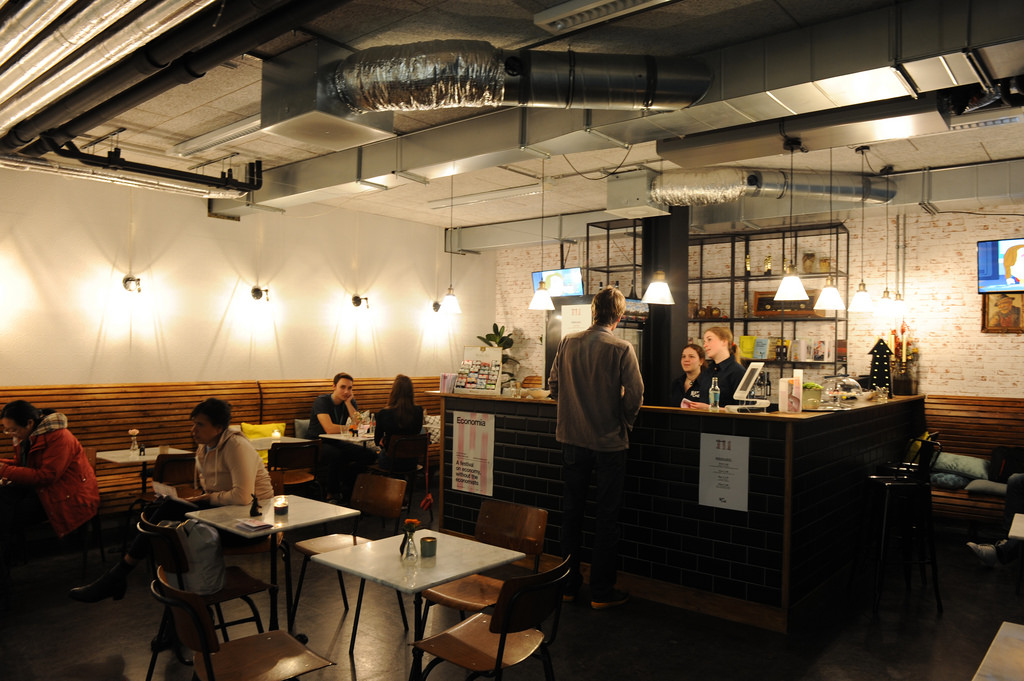 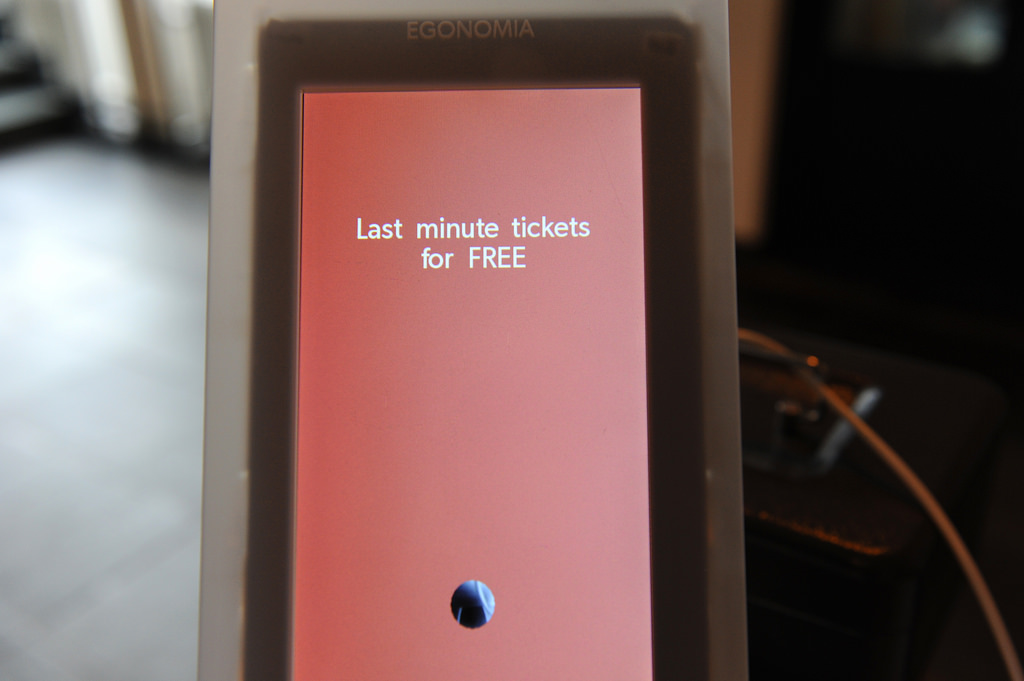 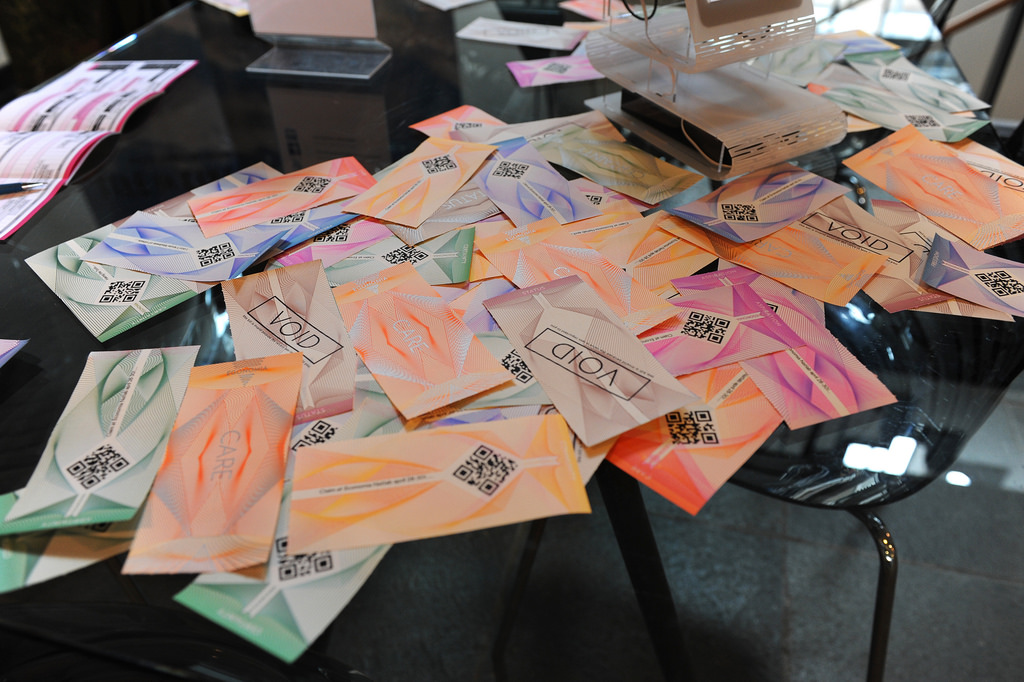 One of the most entertaining moments for me was when i got to play with the festival’s temporary local currency. Because the system is based on your own values and beliefs, you first had to fill in an online questionnaire about the importance that concepts such as knowledge, beauty, network or creativity have for you. After that, the system prints your personal money to spend all over the festival venue. You could buy drinks for friends, get chocolate at the bar, vote, gamble it, etc.

But because EGONOMIA was a social experiment rather than just one of those pop-up local currencies, you soon found yourself defied by the difference between your initial, admirable values and the very prosaic transactions you make in real life. The discrepancies between the former and the latter might explain why having the best intentions and the most laudable ideals will not necessarily translate into a fairer society.

I ended up gambling most of my money (which was a complete surprise to me) and exchanging the rest for chocolate (now, that’s pretty normal.) I may also have ‘borrowed’ some of the banknotes i saw abandoned on the printer. I scanned them in the gambling machine and lost every single time. Ill got, ill spent… 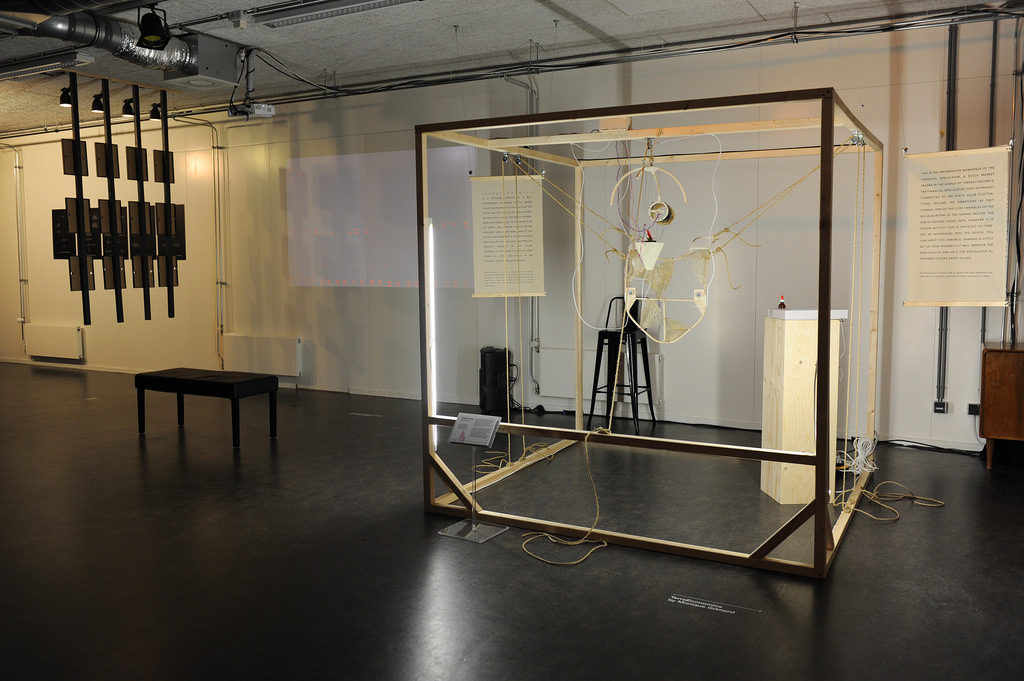 With TerraEconomics, Monique Grimord asks us to ponder on the following questions: What if the stock was not determined by supply and demand, but by health of the earth and resource extraction? Her installation envisions a possible future when the value of goods are no longer dictated by the invisible forces of supply and demand, but are governed instead by the flux of the natural environment, the Earth’s A.I. In her scenario, the countries that pioneered this unique system called it terra-economics.

Jennifer Lyn Morone™ Inc is the girl who became a corporation. I wrote about her work back in 2014 already and i’ll spend more time in a coming story exploring how her project has evolved since i last saw her. In the meantime, if ever you have the good fortune to find yourself in or around Ljubljana, don’t miss her upcoming solo show at Aksioma – Institute for Contemporary Art.

The Economia festival was organized by Baltan Laboratories in Natlab, the former physics lab of Philips, in Eindhoven (NL) on 28, 29 and 30 April 2017.

For more photos of the festival, check out Baltan laboratories flickr set. There’s mine too but i still haven’t improved my photo skills one bit after all these years.