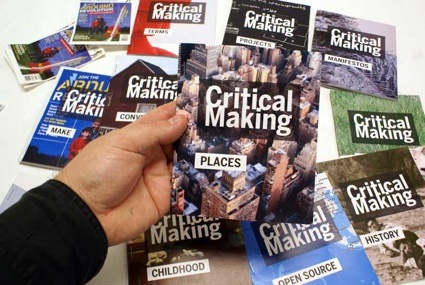 I wouldn’t normally review a zine that’s ridiculously hard to get your hands on but the purpose, production and spirit of Critical Making are so meaningful and pertinent to today’s culture that i had to make an exception. Critical Making is series of small booklets that look at the political, social, activist and even historical dimensions of the DIY culture:

A handmade book project by Garnet Hertz in the field of critical technical practice and critically-engaged maker culture. Critical making is defined by Ratto as exploring how hands-on productive work – making – can supplement and extend critical reflection on the relations between digital technologies and society. It also can be thought of as an appeal to makers to be critically engaged with culture, history and society.

Releasing Critical Making must have been an exhausting experience. It’s a hand-made zine and Garnet Hertz played the role of the chief editor of course but he also had to print the texts and images, fold the pages, trim them, get blisters while relentlessly stapling the booklets together, craft a parcel, add the address and ship the zines. That’s hundreds of stacks of booklets that had to be sent to hundreds of people across the world. I know i’m going to treasure my copy as if it were an artwork (which it probably is.) He’s not even selling the zines, nor is he earning money from ads because the pages are rigorously ad free. 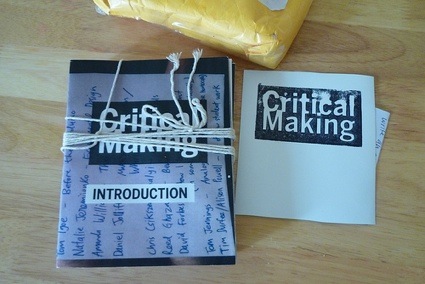 Critical Making might look all punky and crafty but the content is solid. Contributions started pouring in after Hertz asked people on social networks to respond to the concept of critical making. And because he knows some of the most interesting people in the art & tech world, the line-up is pretty spectacular: from an essay by Carl DiSalvo on adversarial design to cuttings of vintage magazines that explain you how to build a poultry feeder that doubles as a rat trap, from Rafael Lozano-Hemmer revealing How to Make Very Large Projects to interviews with Alex Galloway or Natalie Jeremijenko. I’ll stop the list here because the table of content is on the webpage of the project. 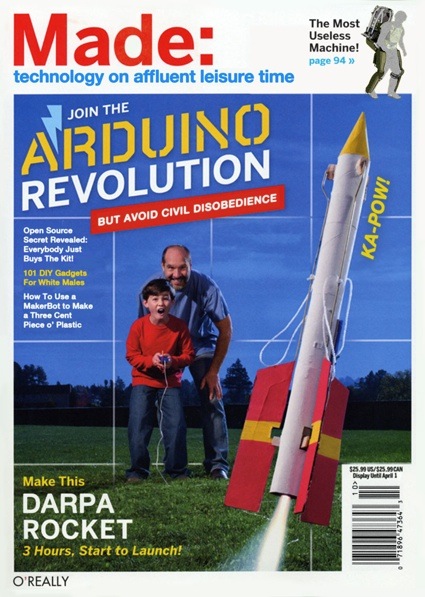 Garnet Hertz, Made: Technology on Affluent Leisure Time, 2012 (Parody and critique of Make Magazine by O’Reilly Media. Distributed as sticker for free and included in Critical Making first edition)

But Critical Making is also a courageous project. While acknowledging the role and importance of O’Reilly and Make Magazine in popularizing the DIY culture, the publication asks us to look at aspects of the DIY culture that go beyond buying an Arduino, getting a MakerBot and reducing DIY to a weekend hobby. Critical Making embraces thus social issues, the history of technology, activism and politics. The project stems also from a disappointment. A year ago, Make received a grant from DARPA to create “makerspaces” for teenagers. Everyone who, so far, had assumed that a culture built on openness was antithetic to the murkiness that surrounds the military world was bitterly disheartened. CM is not the anti-Make Magazine, it is simply an alternative, a forum for electronic DIY practice to discuss hacking, making, kludging, DIYing in a less sanitized, mass-market way. One of the CM booklets (aptly titled MAKE) brings side by side Dale Dougherty‘s defense of the grant (Makerspaces in Education and DARPA) and an essay by Mitch Altman who asks Do Funding Sources Matter? Further discussion about the controversy in the video DARPA Funding for Hackers, Hackerspaces, and Education: A Good Thing? with Mitch Altman, Psytek, Willow Brugh, Fiacre O’Duinn, Matt Joyce)

Ultimately, what Garnet Hertz is now wondering is what he should do with Critical Making: Should he turn the zine into a book people would be able to buy? Release it for free online? Should he hand-make more copies?

I love the format, the physical effort, the limited-edition aspect of Critical Making. On the other hand, i believe that a critical discussion in art and tech deserves a more popular platform (a book, a blog, a PDF, etc.) especially when it is presented in such a pleasant and intelligent way. If you have any suggestion, you know where to reach him (plus, he might have a few extra copy to send out.)

Until CM can be mass-marketed, we’ll have to make do with two videos in which Garnet Hertz explains the context and motivations behind the creation of the Critical Making zines: Critical Making: Moving Beyond Arduinos and MakerBots (lovely shirt, Garnet! very Isabel Marant) and Crunch Lunch with Garnet Hertz: