Part one of my report of the festival is over here: Bio-fiction Science Art Film Festival. Short fiction films about neurotechnology. 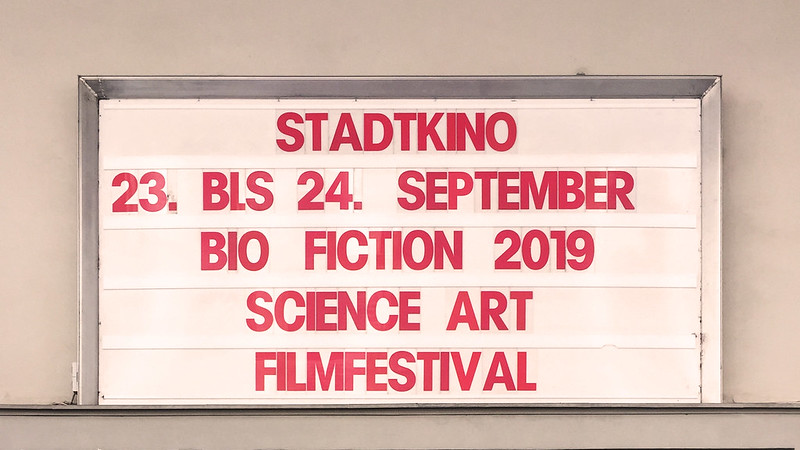 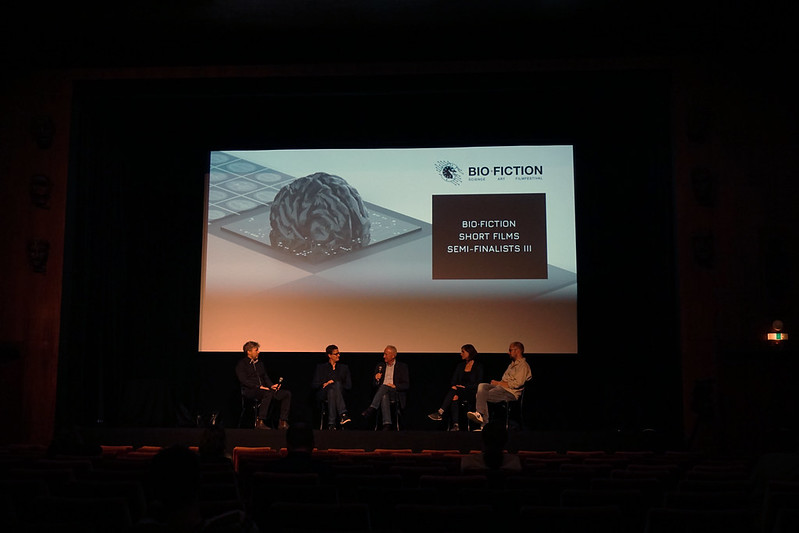 While fiction films provided an engaging entry point to speculate about neurotechnologies and reflect upon their possible social and physical impacts, the Bio-Fiction festival also proposed debates, a very impressive Brain-Computer Interface demo by Christoph Guger from g.tec, a discussion with a documentary maker and a LASER evening at the Medical University of Vienna.

One of the reasons why the Bio Fiction team had chosen to dedicate an edition of the festival to neurotechnology is that it doesn’t get the media and public attention it deserves. The research field has the potential to deeply redefine society and our sense of self. And while university and hospital research build the technology to help individuals who suffer from brain impairment, others (mostly private companies) are either piggybacking on medical research or developing their own projects of implants and techniques that aim to “improve” and augment the human body instead of just fix disabilities.

Today already, any consumer with a desire to “boost learning” and “supercharge neural activity” can purchase nootropic supplements, headbands for on the go meditation, sessions in pressurised oxygen chambers or kits for transcranial direct-current stimulation.

However, as Markus Mooslechner’s documentary Supersapiens demonstrated, transhumanists, scientists and DIY communities who define themselves as “brain hackers” are looking beyond temporary, off-the-shelf brain stimulation…

Supersapiens was released in 2017 and the film maker warned the Bio-Fiction audience that the content was already a bit dated, that neurology had made great progress since he first screened the documentary. Yet, the trailer and extracts he showed and commented for us were still pretty powerful.

The film attempts to investigate the consequences of a brain that would harness both the agility of the human brain and the immense capacity of artificial intelligence. If (or rather when) such super brain finally surfaces, will we all enjoy its wonders? Or will it be the preserve of an elite while the rest of us lags behind, with our sub-par IQ and our old-school cognitive skills?

While some of us might be disturbed by the prospect of machines that invade our bodies even more than they do now, Mooslechner’s film indicates that if you look closely you can already find traces of a society open to the idea of invasive technologies: Swedish citizens who get chips implanted in their hands to dispense with public transport paper tickets, young people eagerly queuing at “implant parties” (“implants are the new tattoo”, Mooslechner pointed out), body hackers who insert magnets and chips under their skins, etc. Are brain implants the next logical step?

On the one hand, i found the interviews from Supersapiens disturbing because some of the experts featured were white men convinced that humans need to be improved and that they know exactly what should be improved. On the other, the film was the ideal platform to trigger uncomfortable questions about, for example, possible threats to privacy and the necessity to start drafting new human rights that would ensure that the brain remains a refuge (the last one?) for human privacy.

Bio Fiction screenings also included the films shortlisted in the documentary section. I’ll start with the “Runner Up for Documentary”:

Carlotta suffers from prosopagnosia, or face blindness, a cognitive disorder that makes her unable to recognize familiar faces, including one’s own face, while other aspects of visual processing (e.g., object discrimination) and intellectual functioning remain intact. At school, Carlotta suffered from discrimination. No one, neither the teachers nor the other children, understood her condition.

The animation by neuroscientist and filmmaker Valentin Riedl, animated and filmed by co-director Frédéric Schuld, shows how she managed to make her own face recognisable to herself despite her disease. 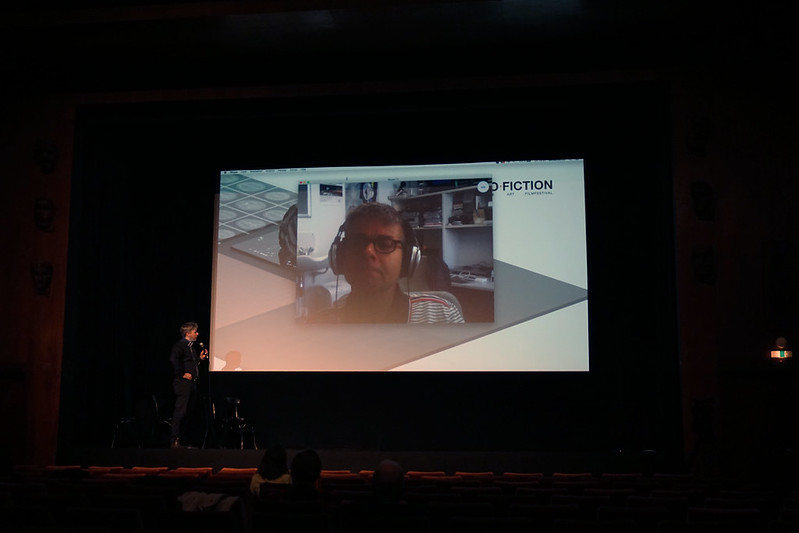 The documentary (winner of the Bio Fiction documentary section) follows the preparation and performance of Activating Memory by the Paramusical Ensemble which teamed up four severely motor-impaired patients with a string quartet at the Royal Hospital for Neuro-disability, London, on 17 July 2015.

The parts for each instrument are generated in real-time from the electrical activity of the performers wearing a Brain-Computer Music Interfacing system which directly accesses the brain via EEG technology. A panel displays four options of musical phrases. The patients select one of them by staring at flashing lights and the system sends their choice to the string quartet to perform.

The project, spearheaded by the Interdisciplinary Centre for Computer Music Research (ICCMR) at Plymouth University and led by composer Eduardo Reck Miranda, explores how emerging brain-computer interface technologies can help those who are unable to walk, move or speak to communicate with others and develop their own creativity. 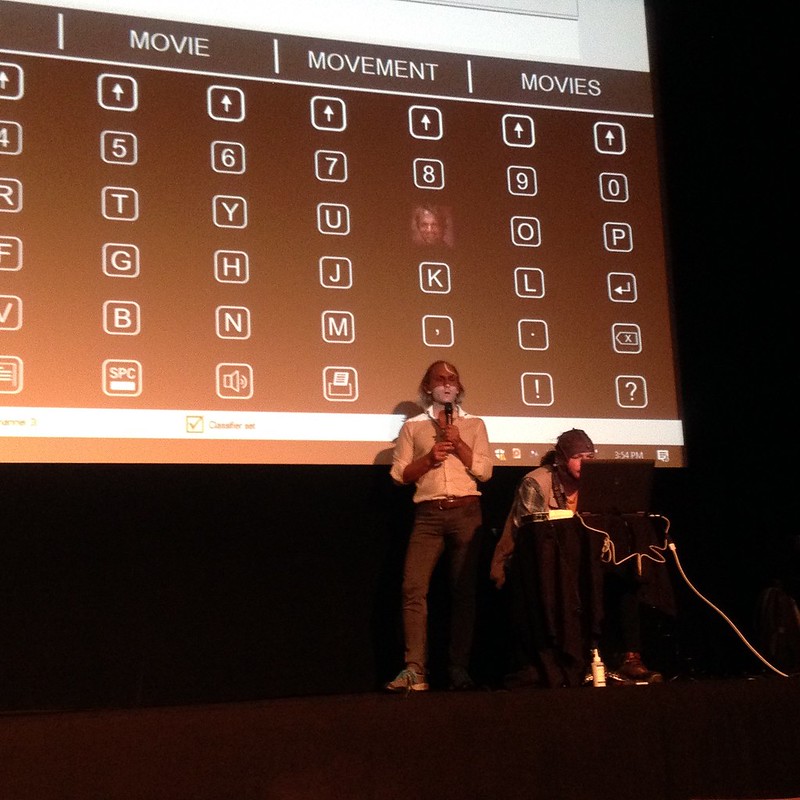 Christoph Guger from g.tec and a member of the public on stage at the Bio-fiction Science Art Film Festival

The technology used during the Paramusical Ensemble concert was demoed on stage at the Bio Fiction festival by Christoph Guger, CEO of g.tec, a company that develops brain-computer interfaces system for research and medical applications. He asked a member of the public to come on stage and experience how technology enables people to write just by thinking.

Since i’m on the topic of scientific presentations, i should mention Professor Oskar C. Aszmann‘s presentation during the LASER panel at Vienna Medical University: 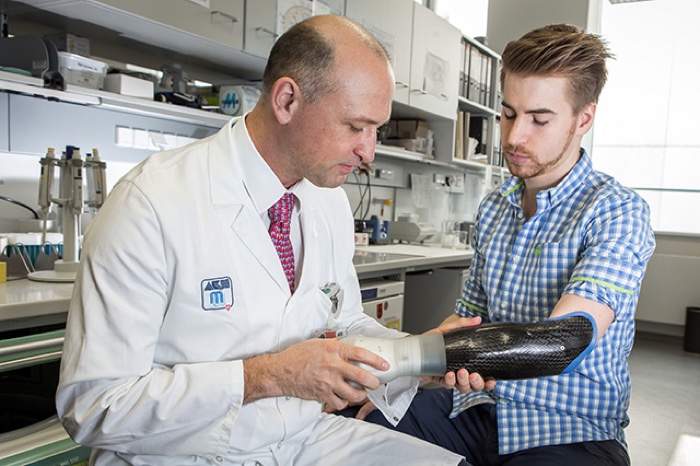 Professor Oskar C. Aszmann performed bionic reconstruction on a patient who had lost an arm. Photo

In his fascinating talk, the Associate Professor of Plastic and Reconstructive Surgery showed us several cases of patients who underwent bionic reconstruction, a technique which consists of replacing a patient’s lifeless hand or even arm by a mechatronic one. The technique combines selective nerve and muscle transfers, elective amputation (once the patient realizes he or she might be better off with less flesh and more metal) and prosthetic rehabilitation. The robotic prosthesis uses sensors that respond to electrical impulses in the muscles so the whole treatment also involves an intense mental training in order to learn how to control the mechanical limb.

One last documentary from the Bio Fiction screenings:
Mind Mightier Than Might is not strictly about neurotechnology but it nevertheless illustrates the extraordinary power and plasticity of the human brain. The hero of the film is Aamir Hussain Lone, a man who lost his two arms in an accident at the age of eight. Yet, his determination helped him overcome his physical disability and become a world-class cricketer without arms.

If you’d like to know more about experiments, speculations and development in neurotechnology, then i’d recommend reading Human enhancement through the lens of experimental and speculative neurotechnologies. The paper investigates “existing experimental and speculative applications of neurotechnologies, with the aim to find out, if these real or diegetic prototypes could be used to better understand the paths these applications are forging.” Their study particularly focus the role of experimental implementations by neurohackers, speculative designers and artists.
The paper was written by Wessel Teunisse, Sandra Youssef and Markus Schmidt. And bonus! Anyone can access and read it for free.

The Bio-fiction Science Art Film Festival is organised by Biofaction, a Vienna-based research and science communication company with expertise in science communication, film production, technology assessment and the study of ethical, legal and social issues in emerging sciences and technology. The festival is currently touring the world. Follow them on twitter and see if they pop up in your neighbourhood.