Arts of Living on a Damaged Planet. Ghosts and Monsters of the Anthropocene, edited by Anna Lowenhaupt Tsing, Heather Anne Swanson, Elaine Gan and Nils Bubandt. 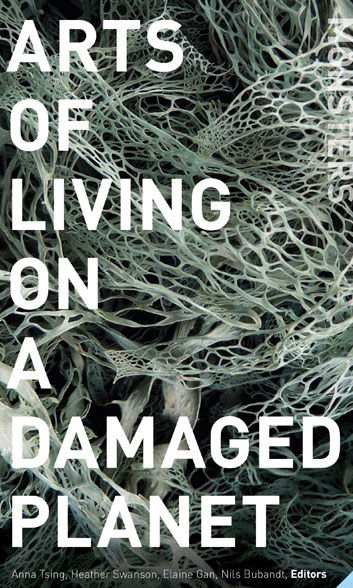 Publisher University of Minnesota Press writes: Can humans and other species continue to inhabit the earth together?

Arts of Living on a Damaged Planet is divided in two. One half the volume is subtitled Ghosts. Flip the book the other way and you have the Monsters. The content of both half-volumes often overlap but while Ghosts left me a bit melancholy and sad, Monsters fascinated me with its stories that sound even more frightening than fiction (jellyfish are the new sharks, people!) 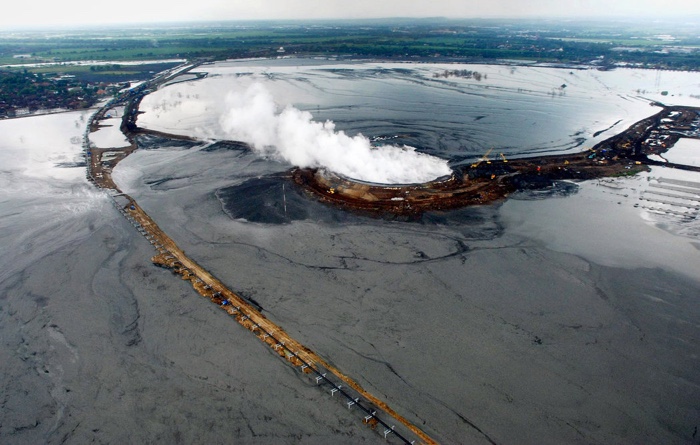 I started with Ghost, the part dedicated to the landscape haunted by long-gone creatures and wiped-out plants. The essays in the half-volume mourn the loss of individual species but look also at the cascading effects that the extinction of one species can have on the others that depended directly or indirectly upon it. Examples abound but i was particularly taken by the one described in Deborah Bird Rose‘s essay. Big bats called flying foxes play a crucial role in Aboriginal people’s concept of the “shimmer of life” (which she describes as the different ways that species find to do interesting things together) through their pollination of eucalyptus trees. Sadly, white people living in small town in Australia don’t care for flying foxes. They shoot them, destroy their habitat and make the landscape less colourful and fertile in the process.

Human action and destruction also have effects that reverberate through time frames and geographies. When manga artist Erika Kobayashi visited the library in Japan where Marie Curie’s notebooks are archived, she brought a geiger counter and found out that, 70 years after the death of the French physicist and chemist, her radioactive fingerprints still registered.

Physicist and philosopher Karen Barad goes even further in her essay when she argues that there is an atom bomb inside each ‘morsel of life’. In Japan, the surviving victims of the atomic bombings of Hiroshima and Nagasaki are called Hibakusha. From the precise moment of the explosion, their body clock has been reset and their cells have been ticking with the rhythms of radioactivity. U.S. officials have since reduced the bodies of Hibakusha to yardstick for measuring bodily tolerance limits and radioactivity worldwide has been synchronized to the bombings in Japan. The effects of the bomb, Barad explains, can thus be felt at the level of the nation-state but also at the level of the local ecosystem, of the organism and of the cell.

All is not doom and gloom in the land of the ghosts though. Jens-Christian Svenning narrates how most of the megafaunas that inhabited the earth disappeared with the arrival of the homo sapiens. Today, 60% of herbivores weighting 100kg or more are threatened with extinction.

However, he continues, some large carnivores and herbivores are being reintroduced in parts of Europe and the U.S., even recolonizing rural areas abandoned by human populations. The reason why European bisons, wild boars, wolves, brown bear and other large animals are welcome again in our landscapes is that their presence benefits us of course! It is hoped that they will restore self-regulating, biodiverse and healthy ecosystems.

As Svenning writes “Megafauna are constant gardeners, one might say, and their extinctions have long-term ecological effects.” 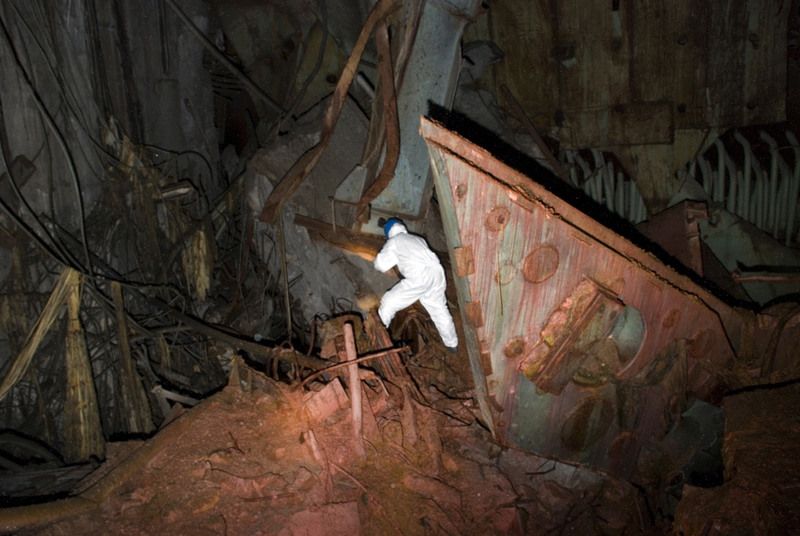 In her essay, essay Kate Brown tells the story of an Ukrainian technician who remains optimistic in the accomplishments and talent of the humankind, even in the face of adversity. She talked to Aleksandr Kupny who climbed into a small hole under the Chernobyl’s charred No. 4 reactor to take photos of the concrete tomb built around the reactor in the months following the accident. His images picture the inside of the sarcophagus but also the decaying the photons of radioactive energy that impose their image onto his film. 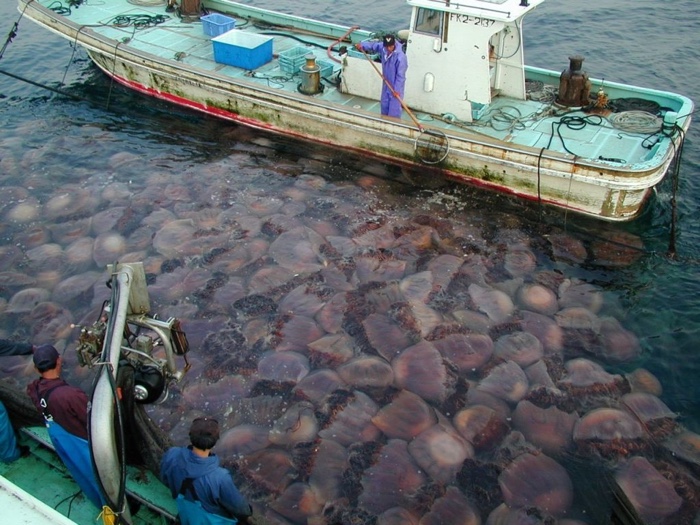 Nomura jellyfish are the biggest in the world and can weigh 200kgs. Photo: Y.Taniguchi/Niu Fisheries Cooperative, via

As i mentioned above, i particularly enjoyed the Monsters half-book. The Monsters are the ones that both result from and bring about ecological disruption. They are the unassuming species that suddenly becomes dominant and predatory, the virulent new pathogens that extinguish life from the inside and on top of this pyramid of the villains, there’s the human being who disturbs complex relationships, turn nature into a disquieting territory in which only freakish creatures can survive.

Marianne Lien gives a particularly shocking example of monster ecology in her description of the pseudo-marine ecosystem required to support intensive salmon farming. Salmon farms across Norway and other countries have to contend with lice infestations that threaten fish health. Because the parasite resist drugs, farmers have to breed wrasse, a fish that snacks on sea lice. The appetites and behaviour of wrasses have to be strictly controlled to ensure that they perform their cleaning duties satisfactorily. The problem is that young wrasse don’t fancy lice. They need tiny crustaceans. So farmers have to cultivate copepods too. The problems obviously don’t end there, local ecosystems have been depleted of wrasses and millions of these lice-eaters now have to be transported over long distances. The ecological simplifications of the modern world have turned monstrosity back against us!

I could go on and on describing everything i’ve learnt in these essays, all the stories about multispecies vulnerability, about edible plants growing in open sewers, gigantic jellyfish capsizing a 10-ton fishing boat, single-cell organisms making life possible, vast landscape of stinking mud, human cruelty and human ability to care. Arts of Living on a Damaged Planet doesn’t pretend to contain the magic recipe to eradicate the overwhelming threats that this planet is facing but it is certainly the most thought-provoking, intelligent and enlightening book i’ve ever read on the topic of the anthropocene.

Here are some of the key points expressed in the book:

– we must look beyond the individual because we live and die entangled with one another. Every living thing is symbiotic, co-evolved and co-dependent on other species. Even the mental and physical well-being of humans relies on the bacteria residing in the intestines;
– we thus need more research that looks at bodies as ecosystems;
– we are still bind to what surrounds us: many ecological phenomena are driven by patterns we cannot see;
– we are not just short-sighted, we also suffer from amnesia and struggle to imagine ecosystems or species that have disappeared only a few generations ago;
– a rigid segregation of humanities and natural science is a mediocre tool for collaborative survival;
– we shouldn’t take the word ‘arts’ in the title too literally because there was very little artistic presence in this book.

Arts of Living on a Damaged Planet has its origins in an interdisciplinary conference that took place 3 years ago at the University of California – Santa Cruz. The videos of the talks are online.

Related book reviews: Extinction Studies. Stories of Time, Death, and Generations and The Edge of the Earth. Climate Change in Photography and Video.

Related stories: From animal sensors to Monet as a painter of the anthropocene. 9 things i learnt on the opening day of the HYBRID MATTERs symposium, HYBRID MATTERs exhibition: when biological and technological entities escape our control and transform the planet, etc.

Image on the homepage: Paislie Hadley, via.