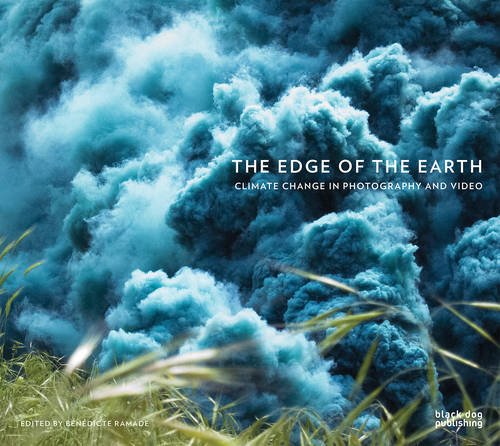 The Edge of the Earth. Climate Change in Photography and Video. Critical essays by author and historian TJ Demos and curator Bénédicte Ramade. Introduction by Director of Ryerson Image Centre Paul Roth.

On Amazon USA and UK.

Black Dog Publishing writes: Increasingly and forebodingly, contemporary artists are turning their attention to the subject of climate change, in poignant and often confrontational ways. The Edge of the Earth: Climate Change in Photography and Video explores recent and historic work in the context of present-day environmental concerns, considering the future consequences of the age of the anthropocene, and humanity’s harsh imprint on our planet.

The Edge of the Earth accompanies a major exhibition at the Ryerson Image Centre in Toronto, and includes works by pioneering and renowned artists such as Edward Burtynsky, Naoya Hatakeyama, Richard Misrach and Robert Rauschenberg; critical propositions on present situations by Chris Jordan, Gideon Mendel and Brandi Merolla; plus visionary works by Jean-Pierre Aube, Adrien Missika, Evariste Richer and Andreas Rutkauskas. Photojournalism from the RIC’s Black Star Collection is also included, contextualising artistic reflections within half a century of historical reportage on the environment. 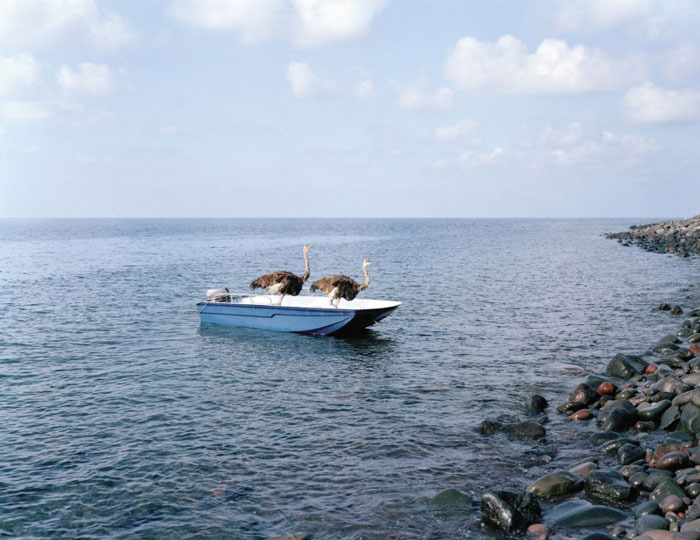 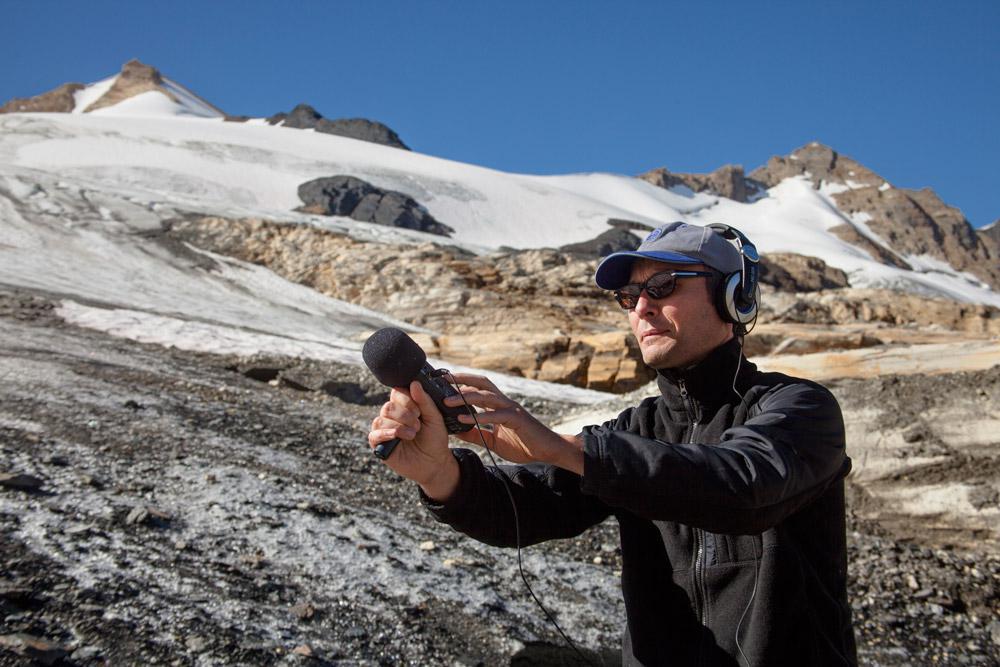 The Edge of the Earth is the most poignant, upsetting and stunning book i’ve read (so far) this year. The catalogue of an exhibition that closed recently at the Ryerson Image Centre in Toronto, it builds a visual iconography of climate change and of environmental repercussions so complex that they probably surpass our comprehension and control.

In her text, curator Bénédicte Ramade explains how the images selected for the show and the book offer far more than mere depiction of landscapes, natural (or rather man-made) events and hyperobjects. They add urgency and a more tangible dimension to phenomena that would otherwise be little more than headlines in newspapers and tragedies that happen to other people, they remodel our definition of environmentalism in the light of climate change, and force us to reassess our individual and societal responsibilities.

TJ Demos wrote a thoughtful essay on the visuality of the anthropocene. His concluding lines are particularly moving. He believes that it might not be the spectacular accidents caused by the fossil-fuel economy that should worry us the most but the silent, accident-free and uninterrupted march of the industry. This new normal background is the one that we should resist politically, civically, morally and economically. 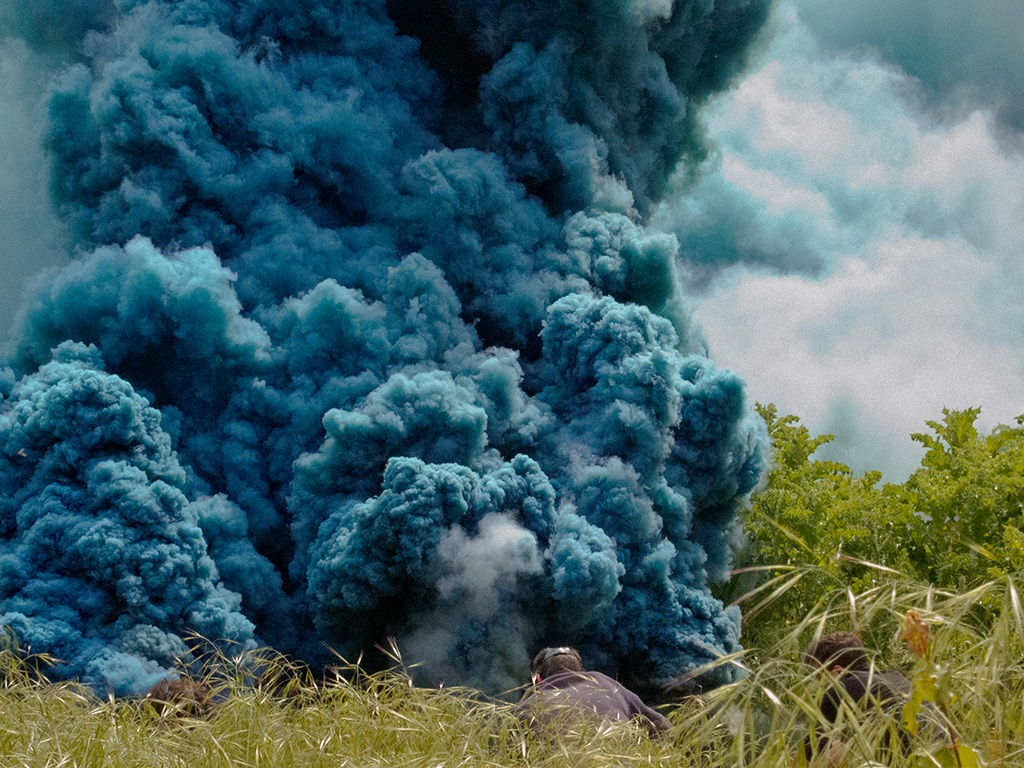 Whether they are of the documentary or the speculative type, the photos in the book often made me feel uncomfortable. How do you deal with the ambiguous emotions prompted by beautiful photos depicting ecological disasters in the making? What do you do with the anxiety and the feeling of being powerless that these images inevitably trigger? Should we put our fate into the hands of geo-engineers? Or should we take a step back and re-evaluate our understanding of innovation, progress and survival?

I’m going to let you weep over these questions and list below some of the most remarkable artworks i discovered in the book:

Taking its title from a 1927 Upton Sinclair novel, the video Oil! introduces us to the early days of oil extraction in North America. The video follows the mechanism of a rusty jerker line system, developed in the 1860s and still used today to draw crude oil from the wells. The tranquil and trusty mechanism runs day and night, throughout the year. 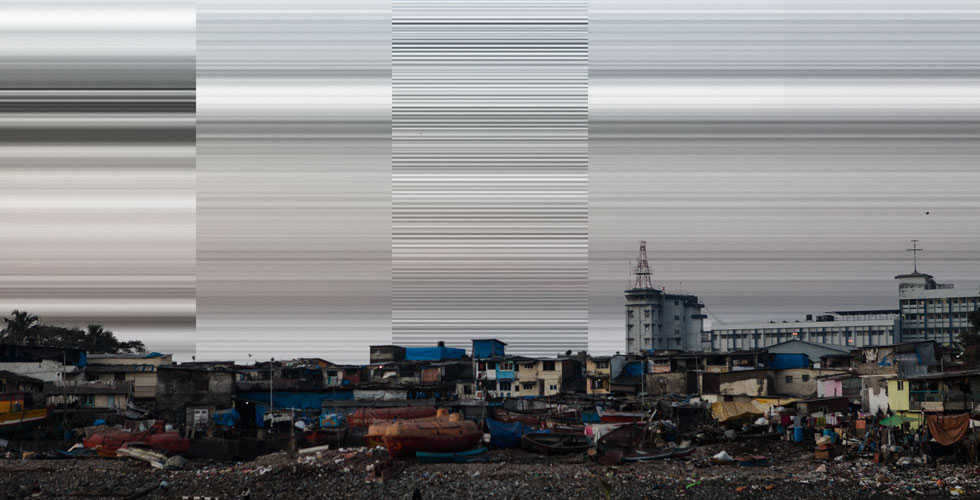 Jean Pierre Aubé makes visible the electromagnetic fields that envelop a city. During his performances around the world, the artist uses radios, antennas and network computers to collect and record radiofrequencies, revealing the invisible presence of thousands of emissions from personal communications systems, security, commercial beacons and satellites. 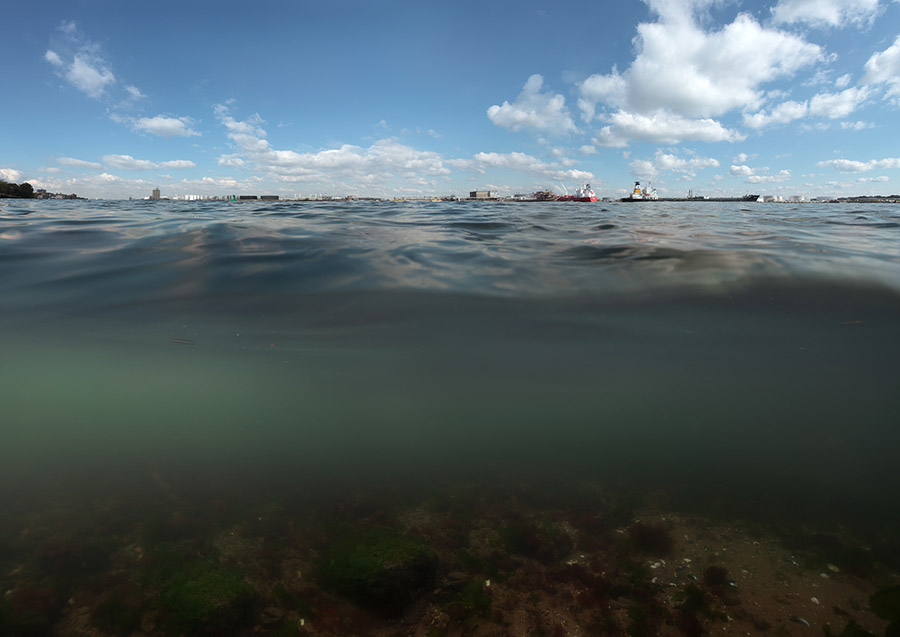 Isabelle Hayeur‘s Underworlds series exposes the transformations of rivers, lakes and other aquatic environments. She dives into polluted waters with her waterproof equipment and reveals dying ecosystems and other man-made disturbances.

Requiem for a Glacier honours British Colombia’s Jumbo Glacier area, a landscape leftover from the last ice age, under threat from global warming and resort development. The center piece of the project is a four movement oratorio scored for orchestra and choir that converts information such as temperature records for the area into music notation. It seems that the project of the resort has since been abandoned. 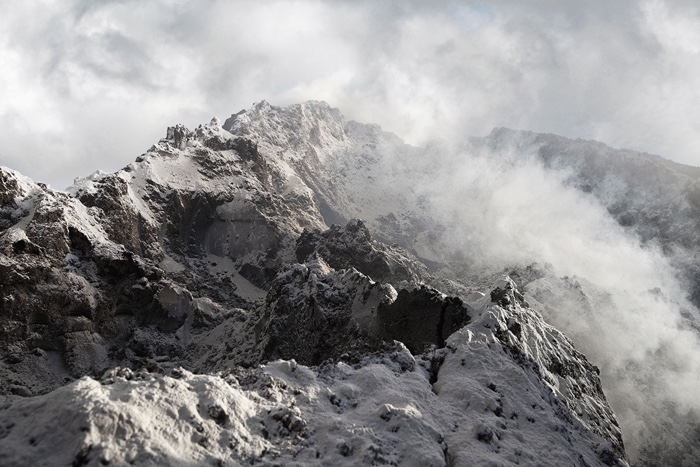 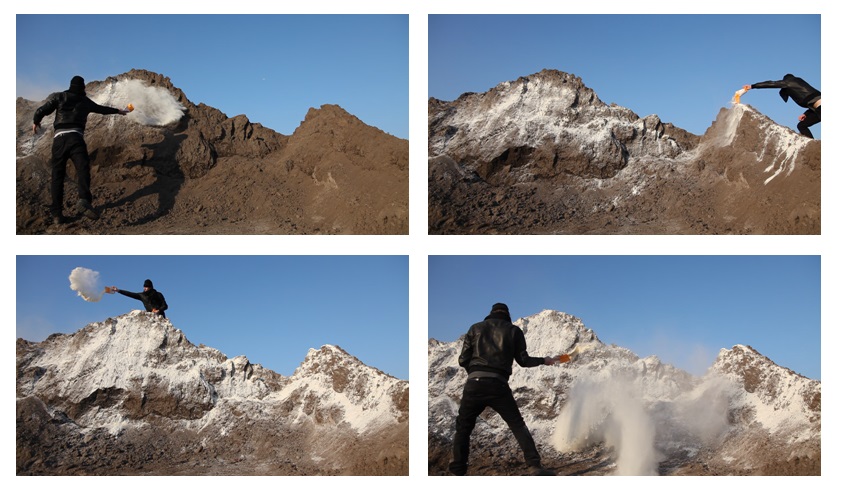 Julian Charrière Panorama Behind the Scene. Photo via Bugada and Cargnel

Julian Charrière Panorama consists of photographs seemingly depicting majestic alpine landscapes under various weather conditions. However, the images are the result of ephemeral interventions in various construction sites in Berlin. Using extracted soil that was covered by flour and fire extinguisher foam, the artist fabricated miniature, model Alps inspired by his native Switzerland in the middle of the city. The series questions not only how perception works, but also our fantasized relation to “Nature” and the sublime. 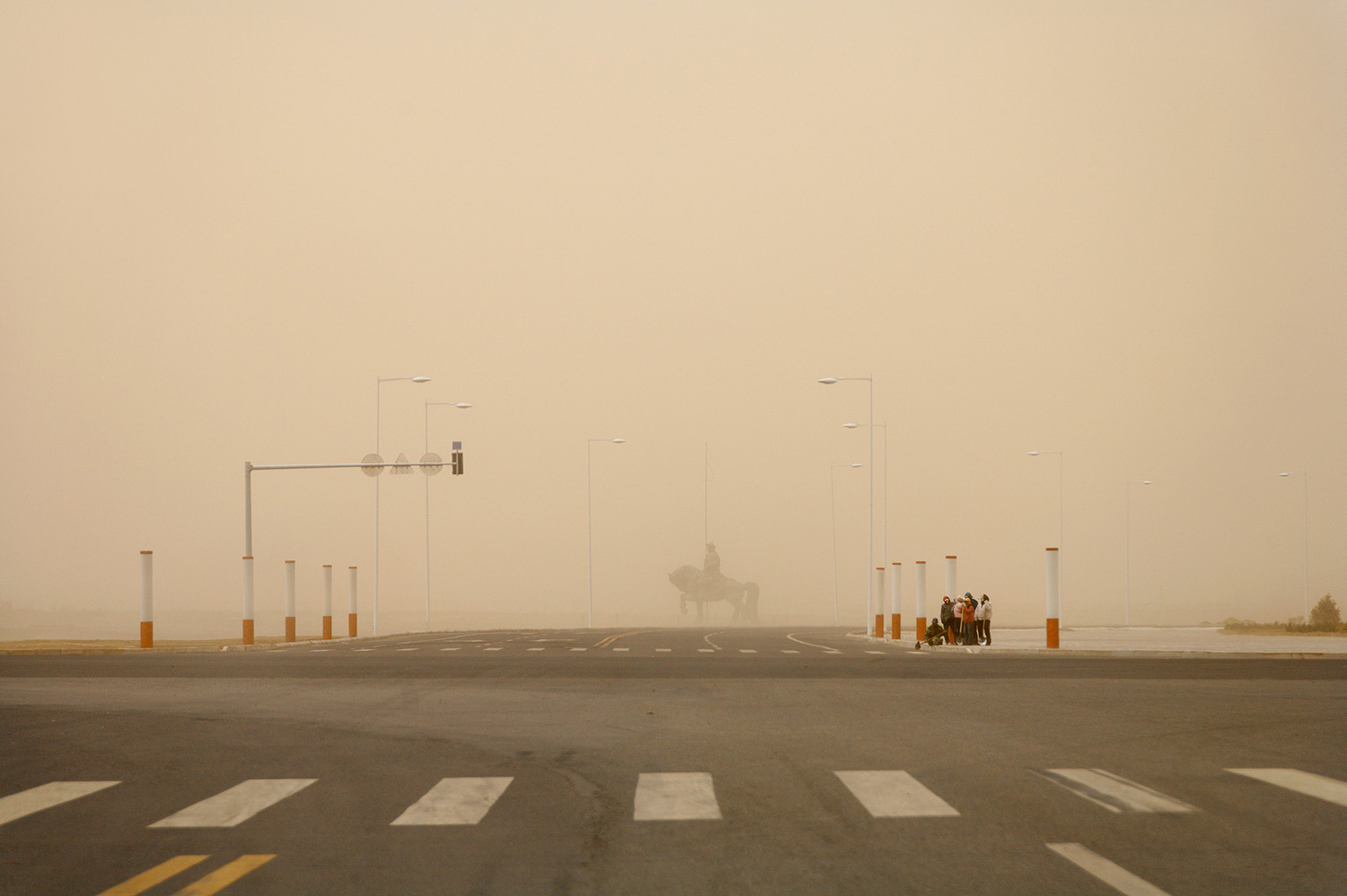 Chinese Dust Bowl documents one of the largest conversions of productive land into sand anywhere in the world. Today, 22% of the deserts located in China have been caused by human activities such as over-exploitation of arable land, overgrazing and increasingly deep drilling for water. The resulting dust is picked up by the wind and transported, in the form of giant sandstorms, all over China and into Japan, Korea and even North America. 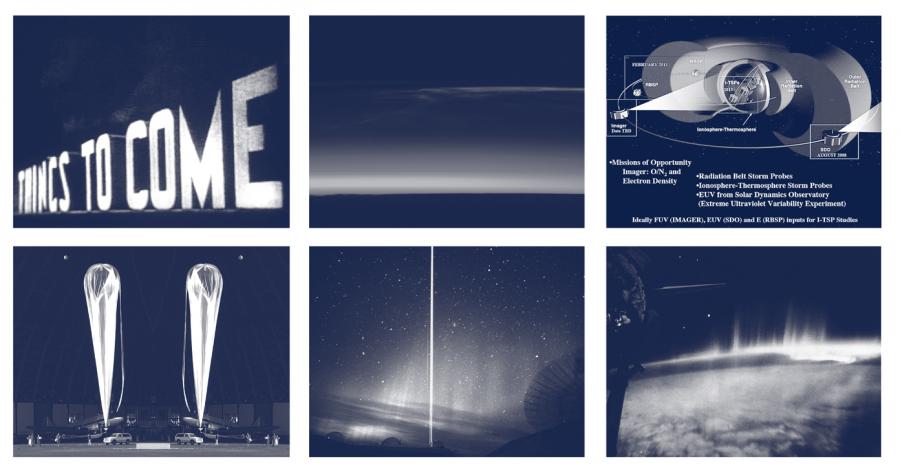 The Atmosphere, A Guide is a poster-essay depicting human influences on the sky and their accumulated traces, whether chemical, narrative, spatial, or political.

Visually referencing the Cloud Code Chart, another interpretive aid for looking up, the Guide visualizes some ways humans occupy present, past, and future atmospheres, from sea level to the exosphere. 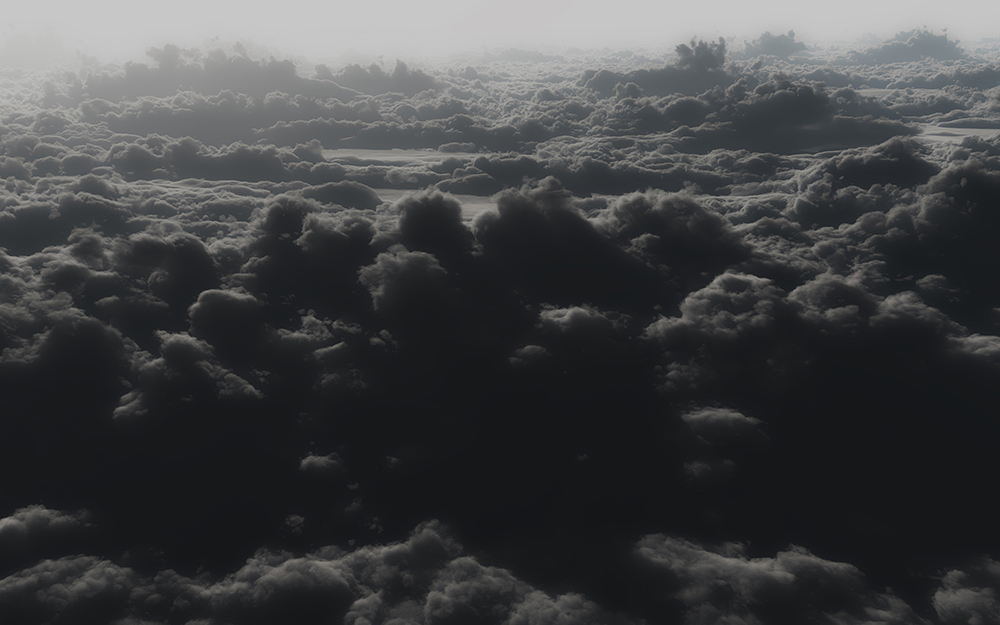 Conceived using a 3D model based on climatological data, Réminiscence is a speculative photo that imagines the gas formation at the early ages of our planet. 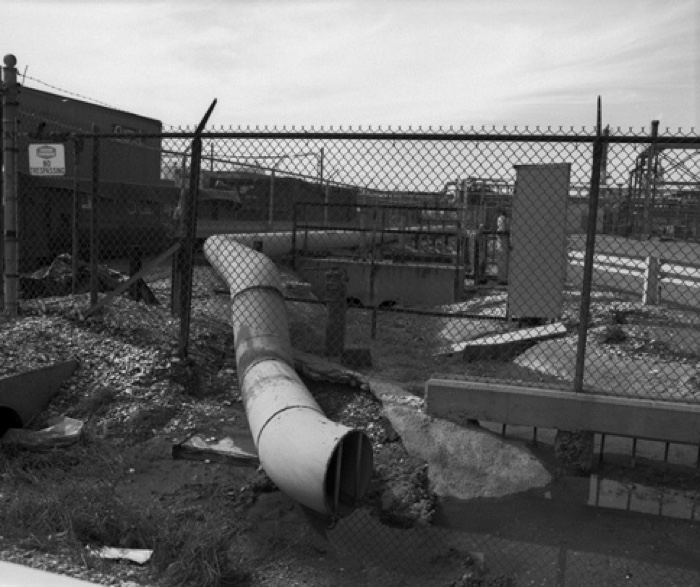 Texas has the largest concentration of oil refineries and chemical plants in the U.S. It also ranks first in the country in the amount of known or suspected carcinogens released by the industry into the environment.

Sharon Stewart‘s Toxic Tour of Texas is guided by farmers, priests, mothers, ranchers, engineers, nurses, teachers and other grassroots activists who are intent on protecting their homes and their communities from exposure to hazardous waste. Some of their actions reversed governmental decisions and halted harmful industrial practices. 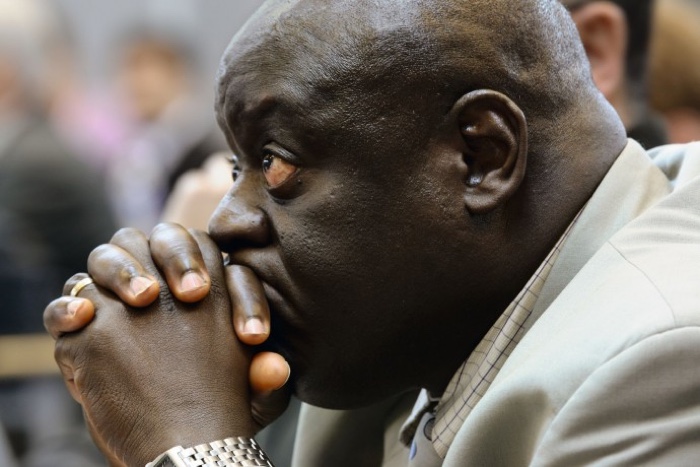 In 2005, Joel Sternfeld attended the 11th United Nations Conference on Climate Change, in Montreal. Almost all the participants agreed that not only was climate change occurring, it was also about to reach a tipping point and become irreversible. His photos portray the delegates at the moment when the horror of what they were hearing was visible on their faces. 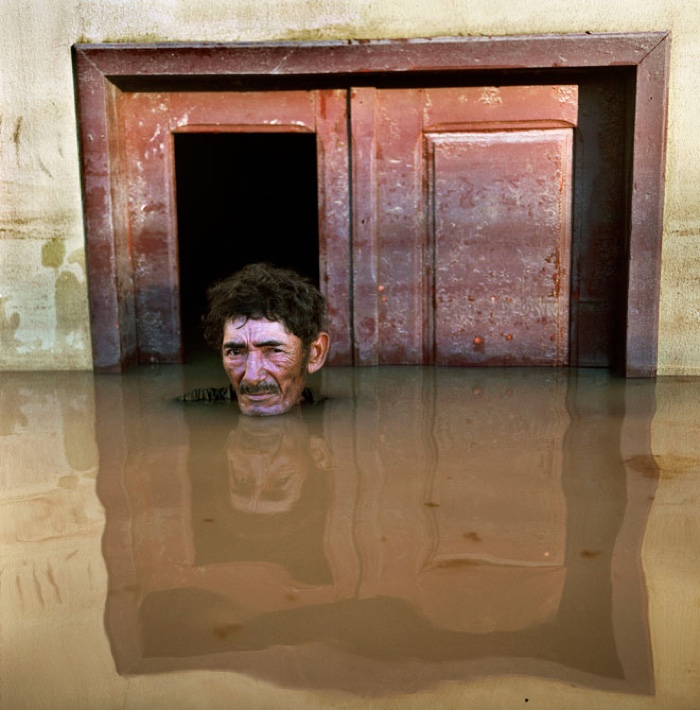 Gideon Mendel has spent 8 years traveling the world, photographing people whose lives have suddenly been devastated by floods. 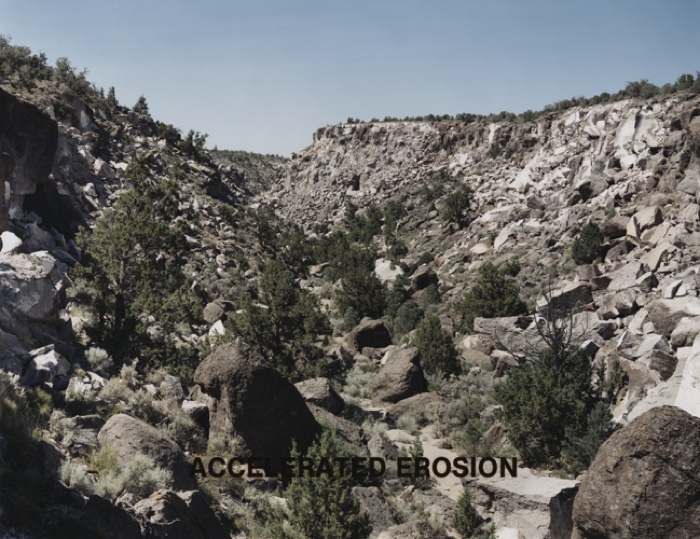 Peter Goin, Accelerated Erosion, July 1987, from the series Nuclear Landscapes. This canyon is in the South Silent Canyon area on the grounds of the Nevada Test Site. Although the area is not used for testing it demonstrates the accelerated erosion caused by nuclear testing nearby. Vibrations from underground testing fracture the rock cliffs, breaking loose huge boulders 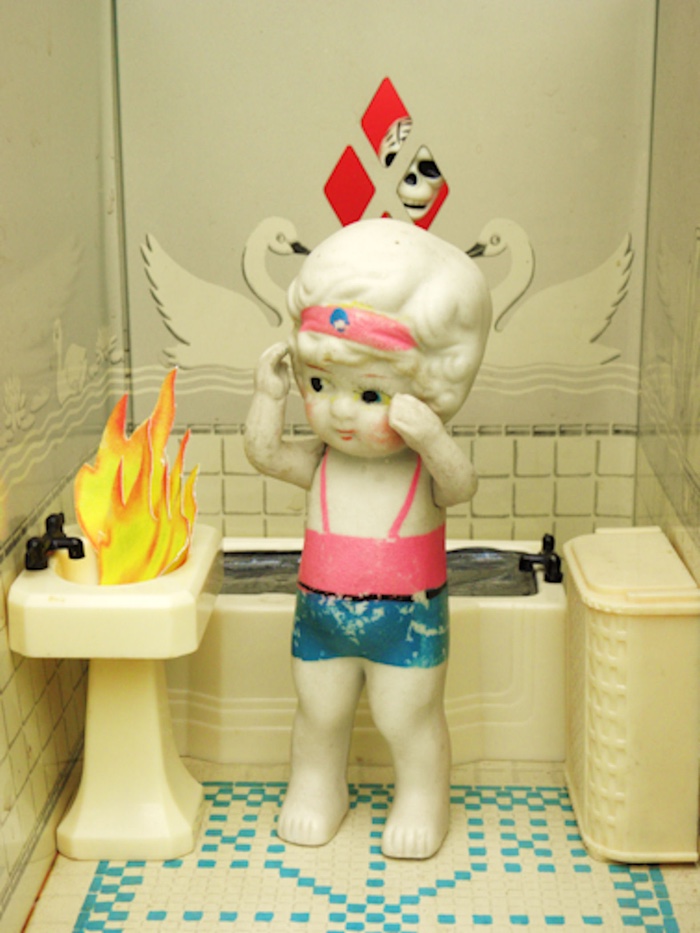 Brandi Merolla, What the Frack!, 2013. From the series Fracking Photographs