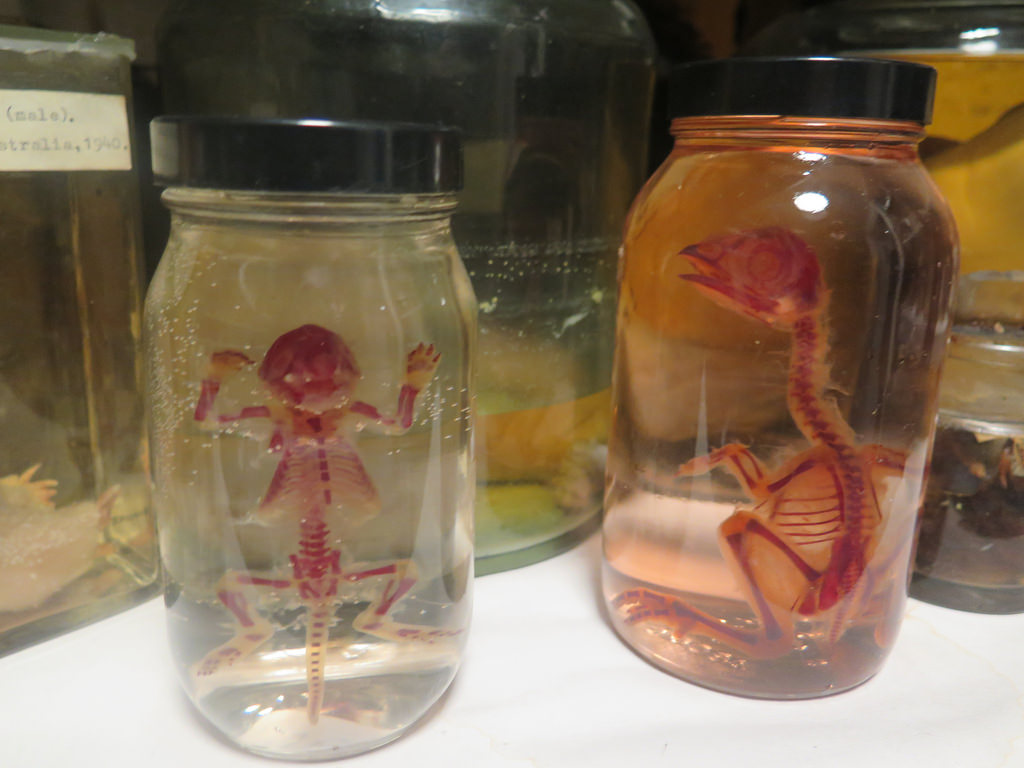 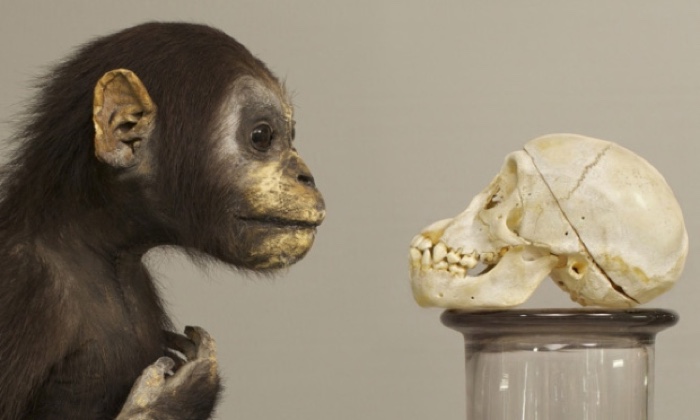 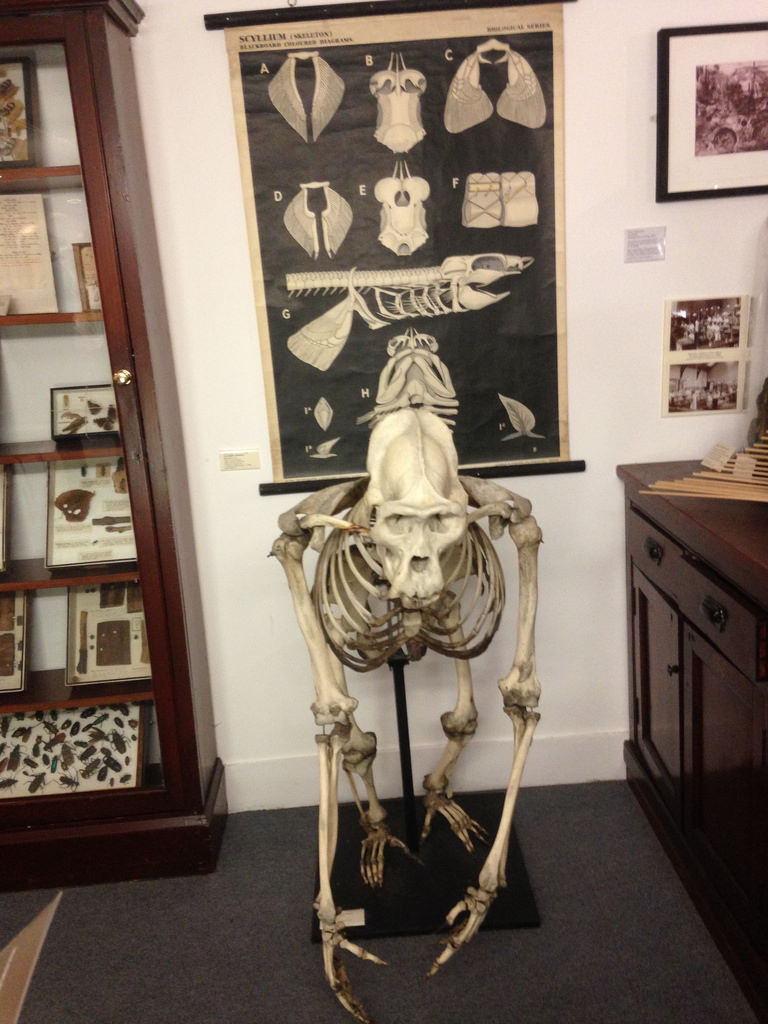 While in Dundee (Scotland), i got a chance to visit The D’Arcy Thompson Zoology Museum, in the company of Matthew Jarron, Curator of Museum Services at the University of Dundee.

The museum was founded in the late 19th century but was demolished in the 1950s. Parts of its spectacular collection was then sent to other museums, parts of it was lost and although the museum is now showing only a fraction of what it used to archive, it’s still a fantastic place to discover.

The collection was assembled by polymath D’Arcy Wentworth Thompson (1860 – 1948.) He acquired specimens from around the world and used them to teach biology.

D’Arcy was a fascinating character. He studied biology, mathematics but also classics. He took up the first Chair of Biology at the University of Dundee, was a pioneer of mathematical biology (more about that in a bit), had a keen interest in art and was also one of the first scientists who pressed his government to protect endangered animal species. After a trip to the Arctic in 1896-97, he recommended protection for the seal populations (decimated by the fur industry) and also brought attention to other species at risk, including whales and the sea otter.

He is mostly known for his book On Growth and Form which pioneered a new science called bio-mathematics or mathematical biology, proposing that the growth and form of living organisms are subject to fundamental laws of physics and mathematics. 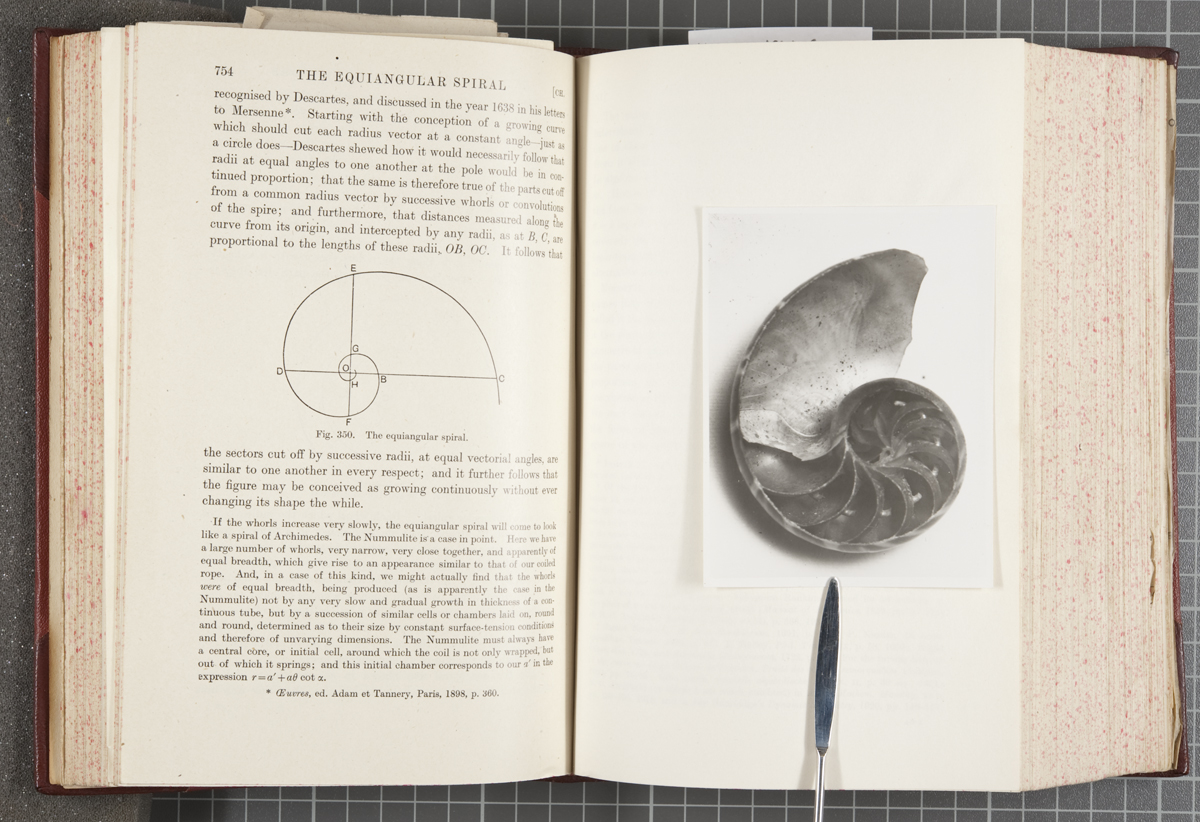 Page 754 and an inserted page from D’Arcy Wentworth Thompson’s personal copy of On Growth and Form. Image via Echoes from the Vault

The book raised controversy for several reasons. One of them is the chapter Theory of Transformations which appeared to contradict the Darwinian theory of evolution. In reality, the chapter wasn’t a refutation of Darwin’s ideas, it merely pointed out that there were some limitations to Darwin’s tendency to explain everything by natural selection. While his predecessor believed in a slow, gradual evolution, D’Arcy argued that one species could be transformed into another through sudden, mathematical processes.

Interestingly, a number of scientists supported D’Arcy’s views: biologists Julian Huxley and C. H. Waddington but also everyone’s favourite: Alan Turing. D’Arcy’s ideas had an impact on other scientific disciplines: mathematics, anthropology, geography, forensics, cybernetics and artificial intelligence. Besides, his writings about the mathematical beauty of nature went on to influence artists and architects such as Henry Moore, Mies van der Rohe and Le Corbusier.

The current museum of zoology was open to the public in 2008. In spite of the loss of a large part of its collection, the museum remains a wonderful place to visit. For the historical, zoological specimens of course but also for a number of artefacts that are interesting from an artistic point of view. The teaching charts and models for example: 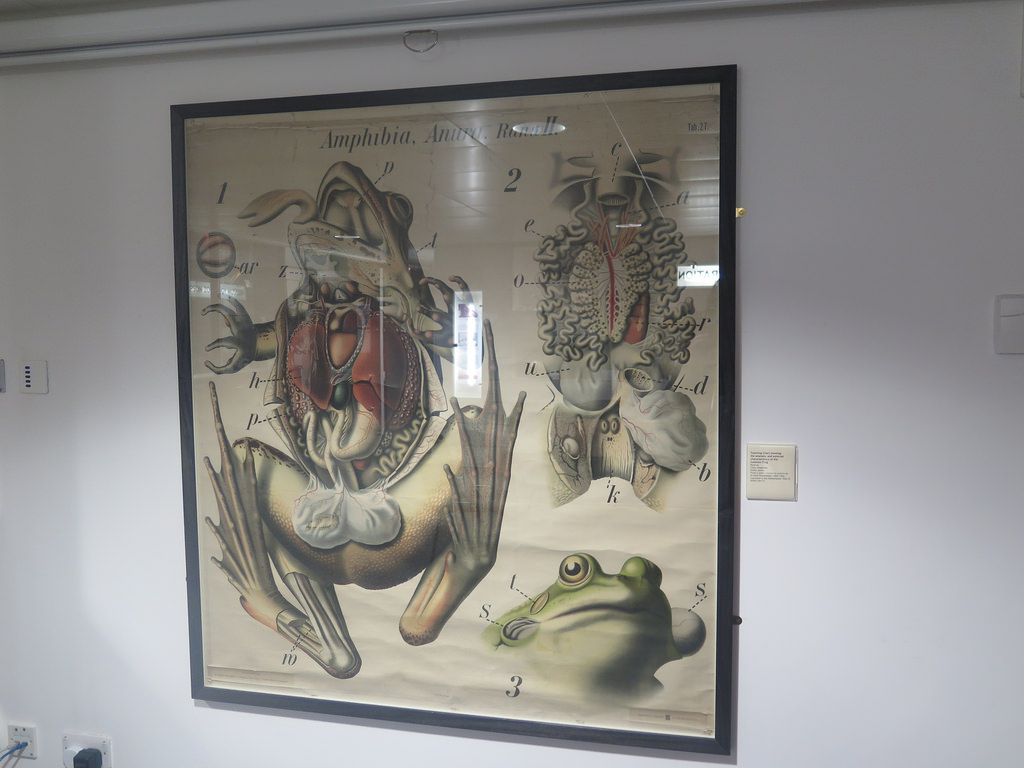 Teaching chart showing the anatomy and external characteristics of the Common Frog. From a series created by Dr Paul Pfurtscheller, 1902-1926 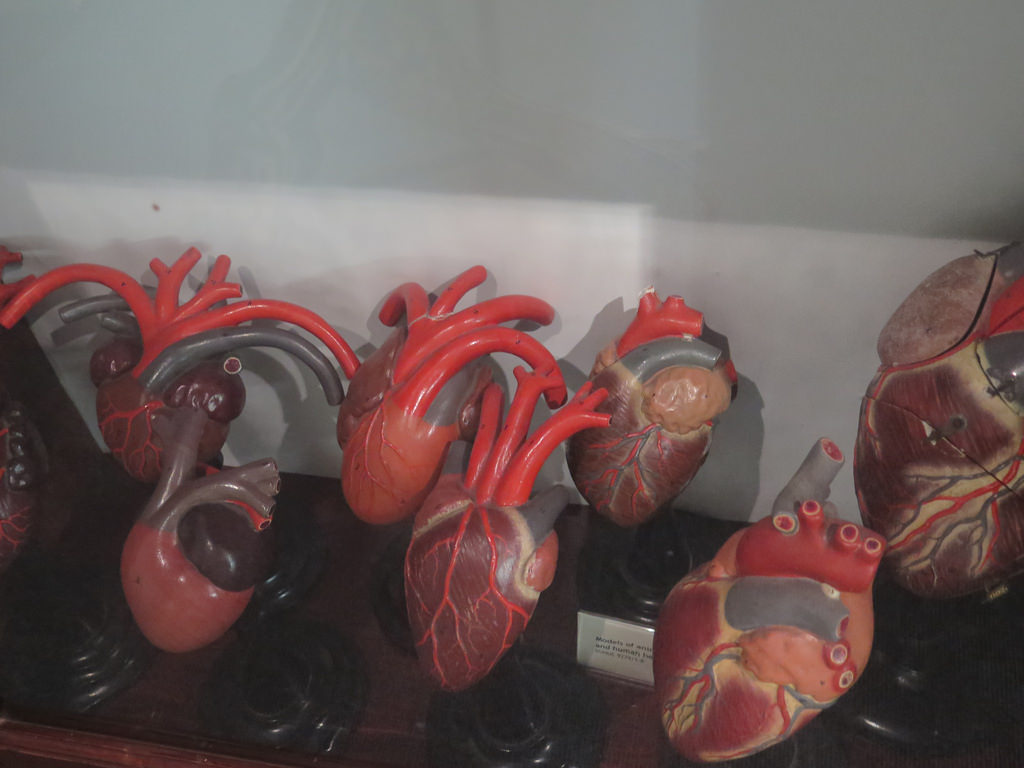 Models of animals and human hearts

But what makes the museum unique is that it’s not just biology students who use the collection, artists are also invited to come and respond to the specimens on view. The museum has acquired a number of artworks that draw on D’Arcy’s work and thanks to a grant from the Art Fund, they have been able to commission new works and organize residencies for artists.

And that’s it for my intro. I’m now going to leave you with lots of images and a few comments: 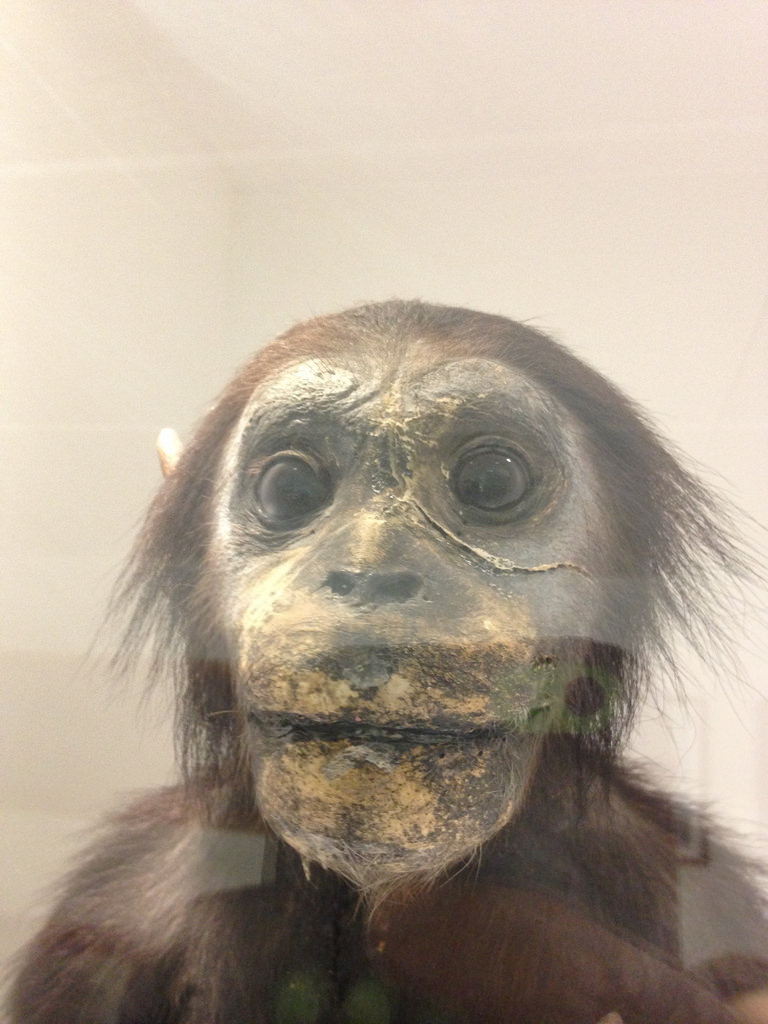 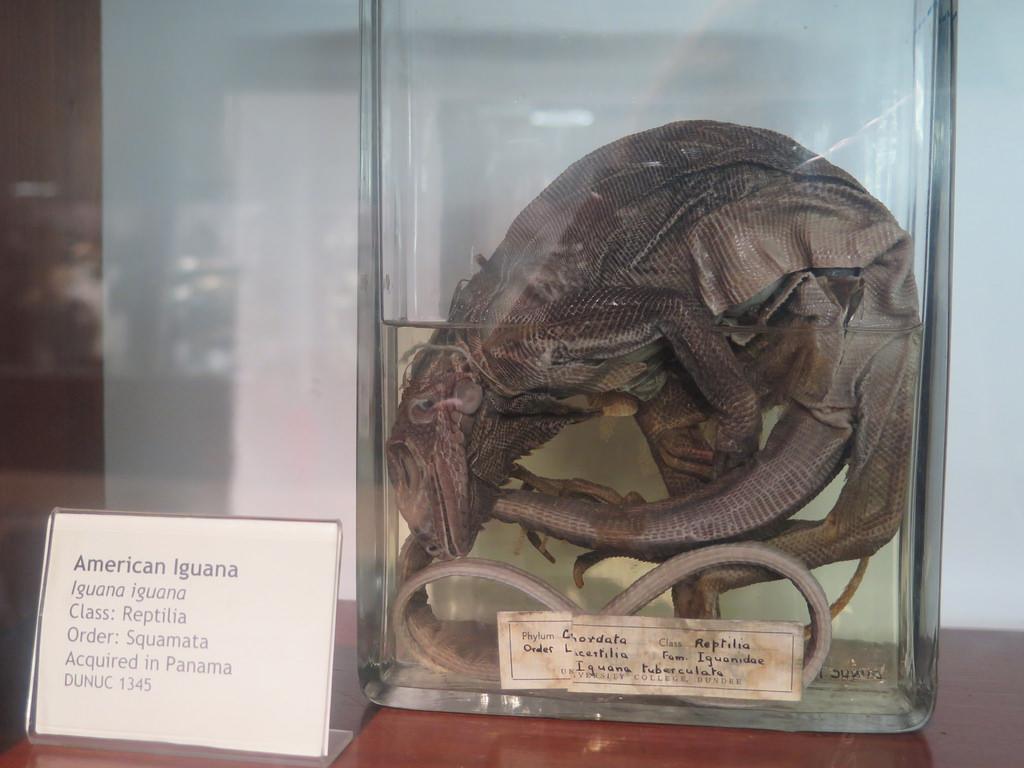 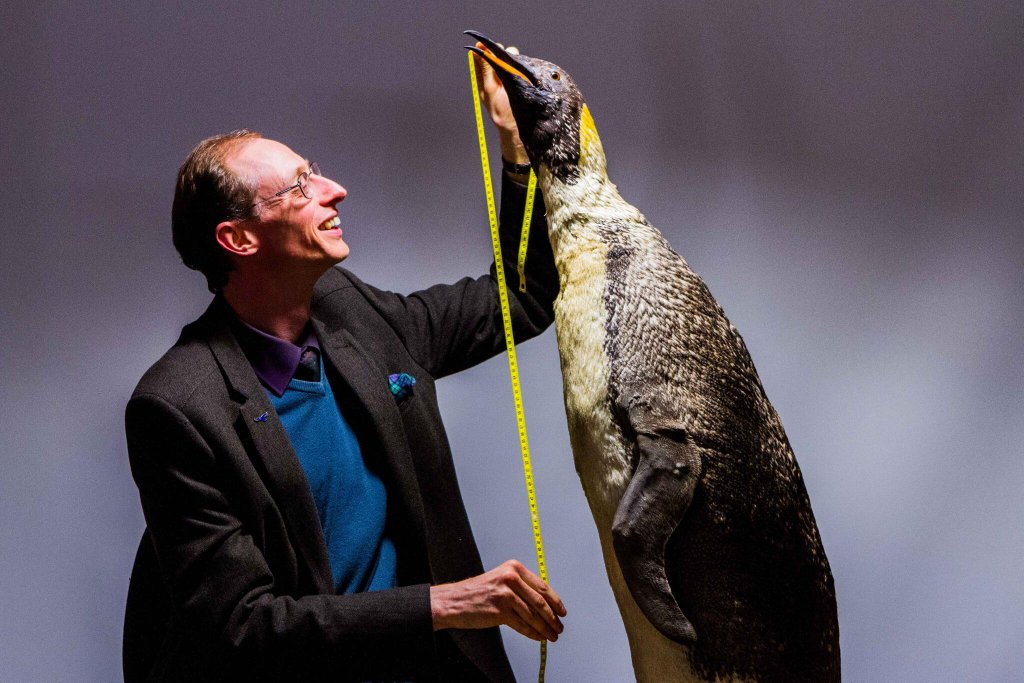 Matthew Jarron, Curator of Museum Services at the University of Dundee with the Emperor Penguin. Photo Dundee University Museum

The Emperor Penguin specimen first appeared on a photograph taken at the D’Arcy Thompson Zoology Museum in the early 1900s. The bird disappeared after the demolition of the museum in the 1950s and turned up in the ‘70s, when it accompanied students of the Dundee University Biology Society to bars and parties. He then went awol for 3 decades, until it was discovered in The McManus: Dundee’s Art Gallery and Museum collection in April 2014. The dusty creature was restored and returned to its former glory.

It is very likely that the specimen was taken by members of the Dundee Antarctic expedition of 1892/3. Which makes it one of the oldest emperor penguins in the world. 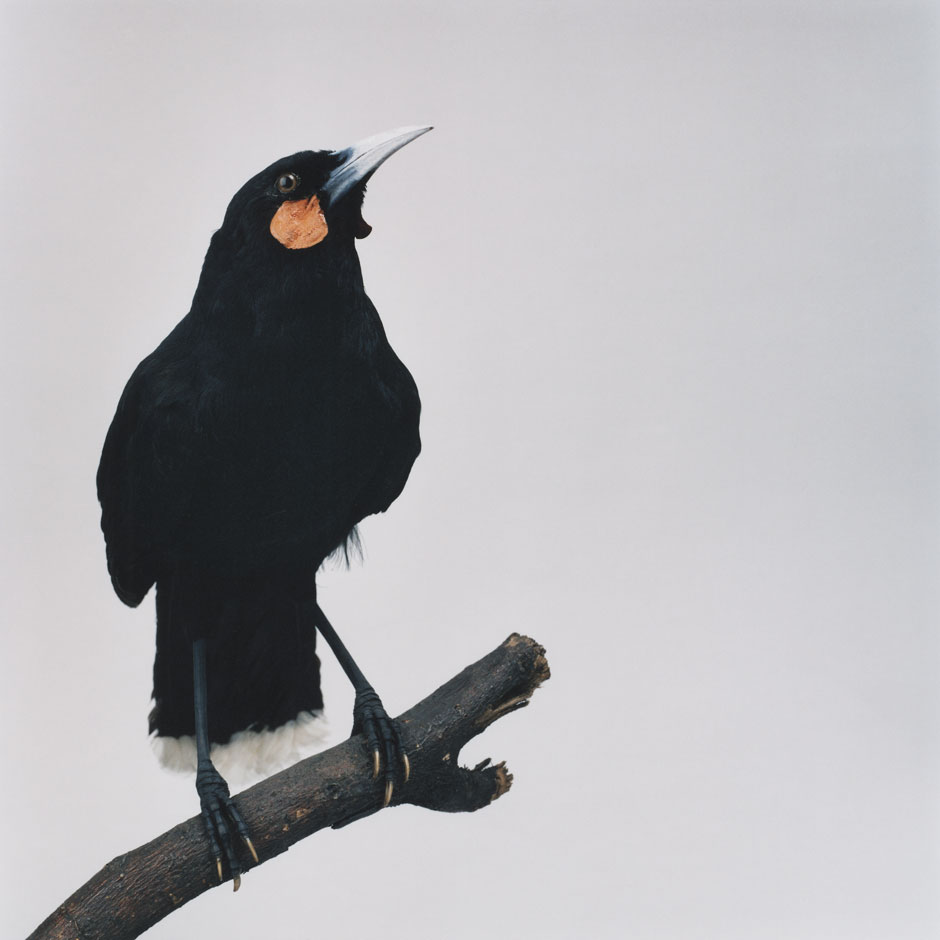 The Huia was a species of wattle bird found in New Zealand. The male and the female had differently shaped bills. Working together to feed on wood-burrowing larvae, the male would chisel the bark from trees, while the female removed exposed grubs with her long, curved beak. The arrival of European settlers led to the loss of habitat, the introduction of new predators and the mass killing of the birds in 1901 when their feathers sparked a fashion craze on the old continent. The last officially recorded Huia was seen in 1907. 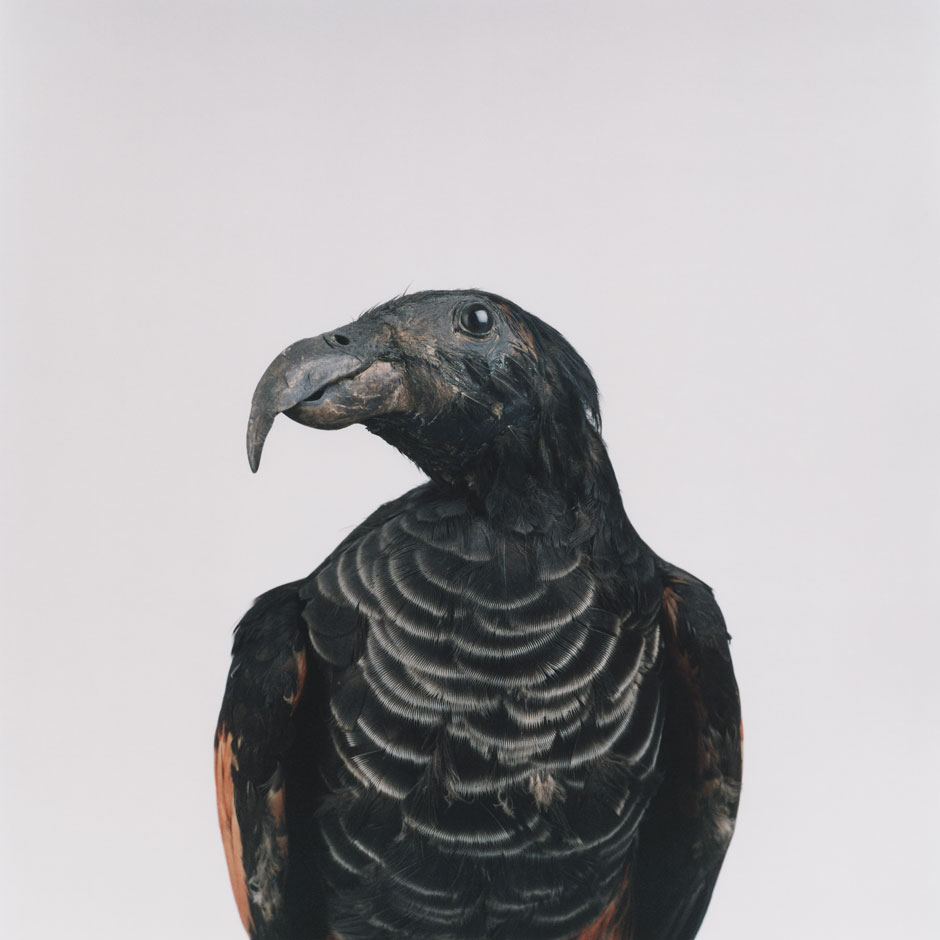 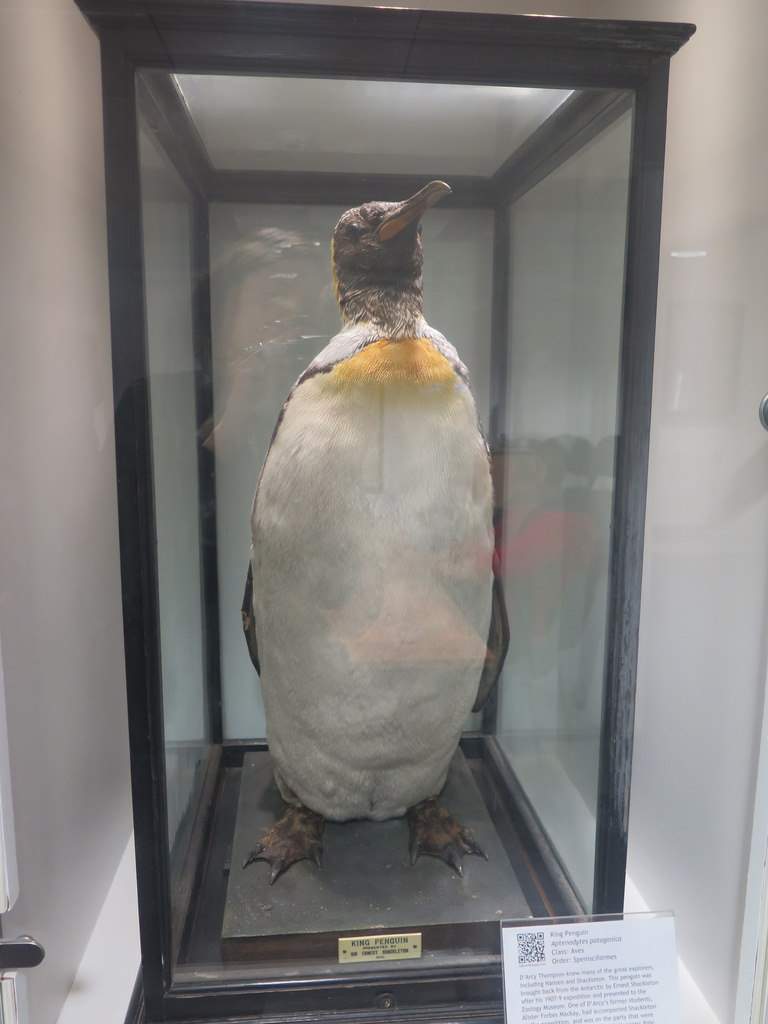 The museum presents a fair number of rather distressing bird heads: 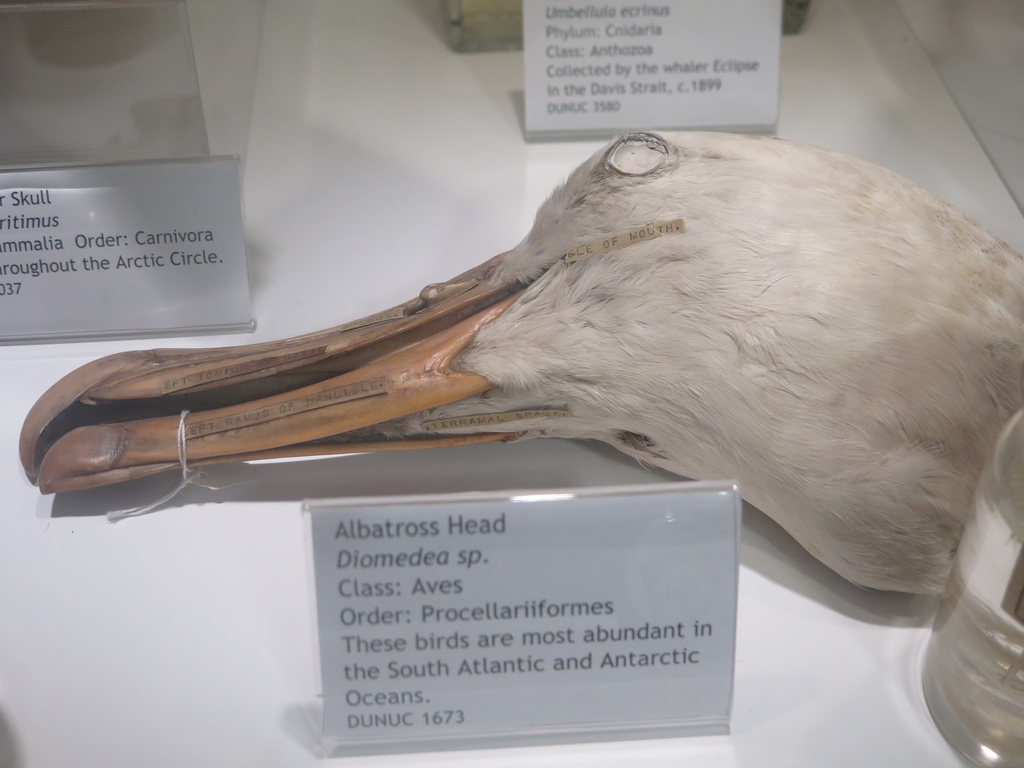 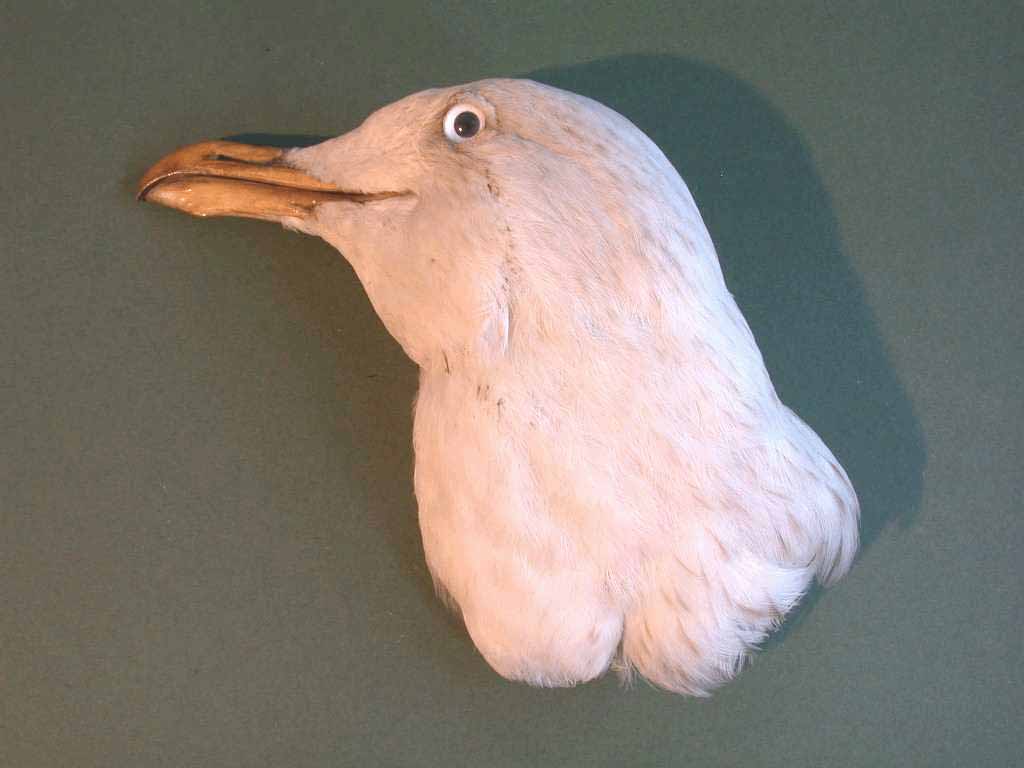 One of the artworks displayed alongside the historical items pays homage to extinct animals: 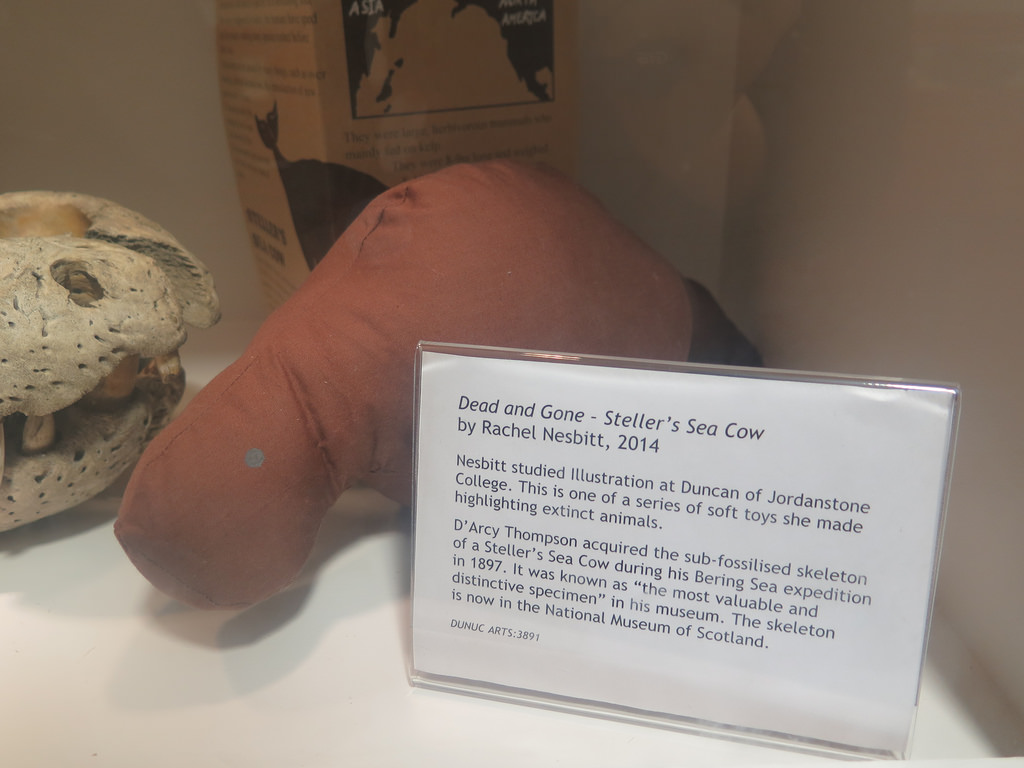 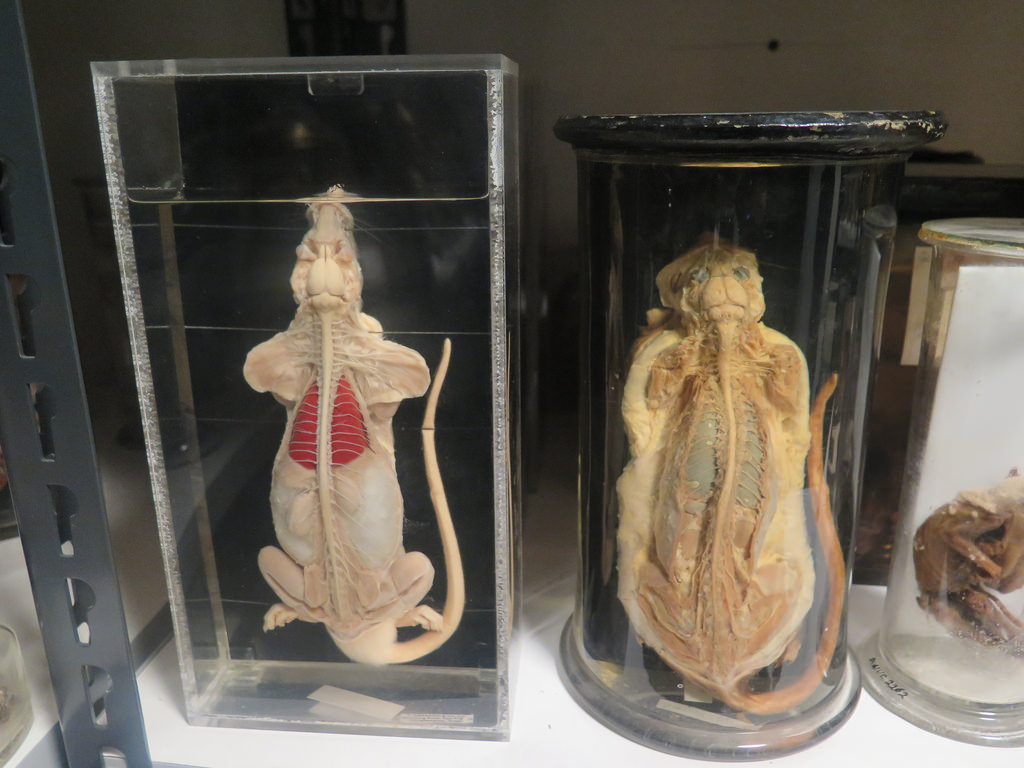 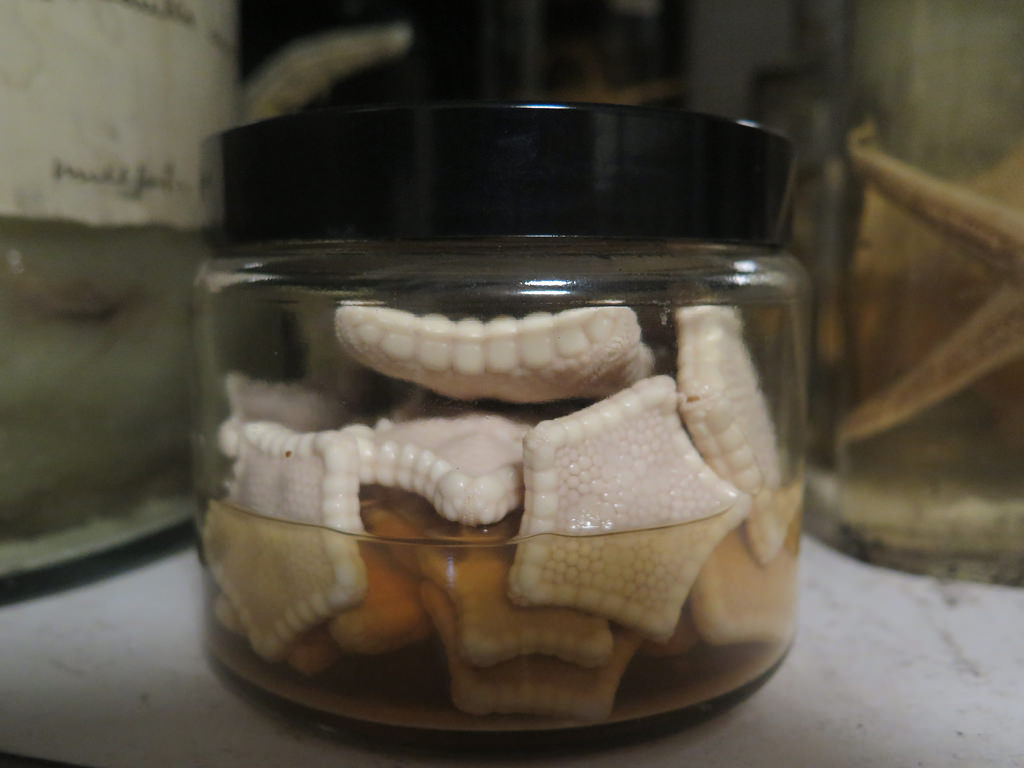 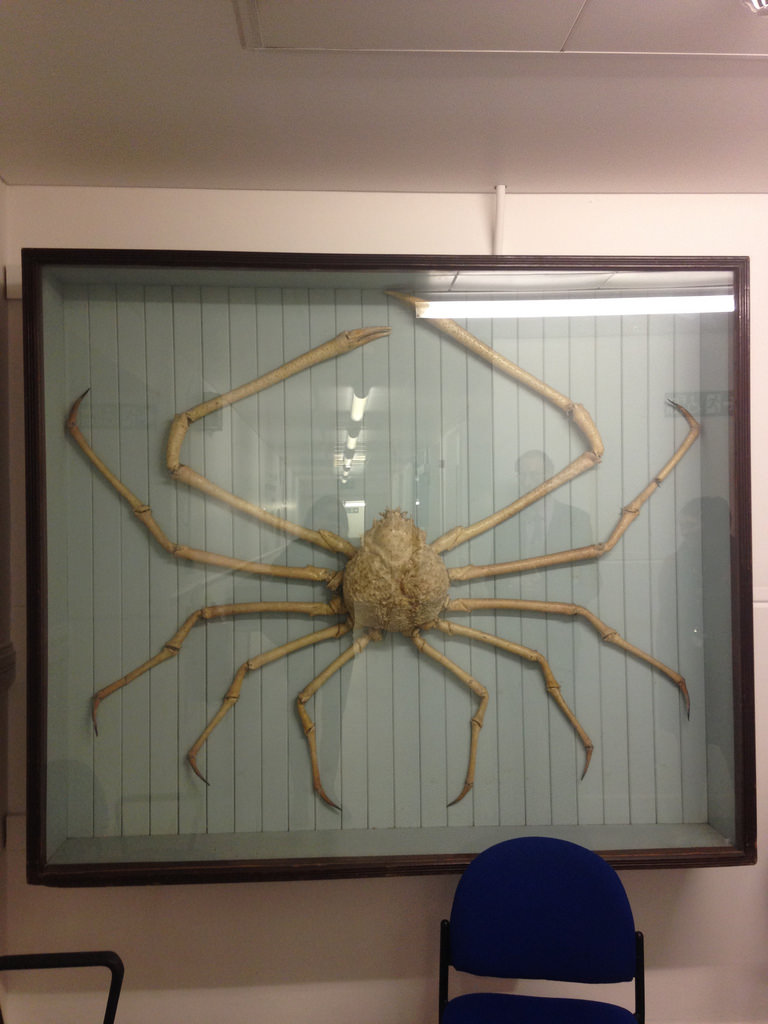 For more background about D’Arcy, the museum and its collection, check out this video of a lecture that Matthew Jarron, Curator of Museum Services at the University, gave at the Slade School of Fine Arts.

The Zoology Museum is open to the public on Friday afternoons during the Summer vacation as well as occasional open days such as Easter and Doors Open Day. Open by appointment at other times.

Both the Zoology Museum and LifeSpace (a collaboration between the Duncan of Jordanstone College of Art and Design and researchers from the School of Life Sciences) make Dundee an interesting place to check out for anyone interested in the connections between art and science.
More images in my Dundee album and on D’Arcy Wentworth Thompson’s facebook page.
Previously: Open source estrogens and other hormonal tales at LifeSpace.