While looking through the programme of the ongoing Sight and Sound Festival, i found out about The Pirate Cinema, an installation that makes use of a data interception software of the same name to reveal in real time the hidden activity and the geography of peer-to-peer file sharing but also the aesthetic dimension of P2P architectures. 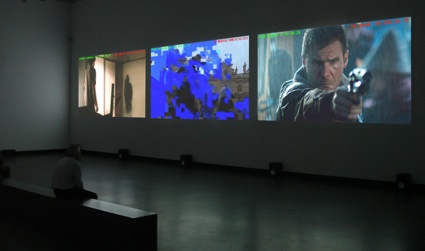 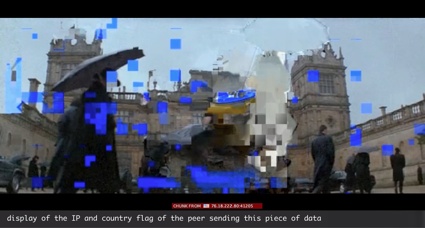 The video installation relies on an automated system that downloads continually the most popular torrents. The intercepted data is immediately projected onto a screen before being discarded.

The flows appearing on the screens constitute a sort of ‘surveillance’ of the peers as fragments of the files that they are exchanging can be visualized during the transmission or the reception. The remote users are, unknowingly, composing an endless collage determined by what they chose to download.

The work was devised by Nicolas Maigret and developed with the help of Brendan Howell. I caught up with Nicolas while he was putting the finishing touches to the installation.

Hi Nicolas! The description of the work says “In the context of omnipresent telecommunications surveillance, “The Pirate Cinema” makes visible the invisible activity and geography of the peer to peer sharing network.”  Could you explain with more details?

For an exhibition like this one, which is based on the most traded torrents, the vision is voluntarily an ultra-reducing one, it is a form of “greatest common denominator” of media on a world scale. We can, in some ways, navigate through what is consumed at a particular moment.

Are images appearing randomly? How does the system work?

This version monitors exchanges of The Pirate Bay’s top 100. Each computer selects a few torrents from this list and monitors them for a minute, before switching to new file.

To present the project clearly, I often talk about the context, the imaginary and the functioning of the P2P architecture.

In the ’80s, VHS brought cinema into the living room. Today, P2P and Internet bring it into personal computers and mobile phones. Through these modes of distribution, a wide-ranging reflection opens up about the media, the medium and what it specifically vehicles.

The P2P sharing protocol is based on the fragmentation of the files in small samples, it is an exchange unit. This fragmentation loosens the exchanges to different recipients. A file can then be recomposed sample by sample until it is complete, from snippets emanating from separate users and in a disorderly manner.

From a cinematic perspective this preliminary fragmentation of the media is also a fragmentation of the film material and of the narration. These “broadcasting mechanics” come with specific formal opportunities: mashup cinema, random editing, weaving together different films frame by frame, glitches and merging of different fragments.

This installation suggests a way to perceive the digital filmic medium as a stream, or rather as streams distributed on a global scale. In other words, The Pirate Cinema intends to re-explore films through the logic of cables, which is unique to each connection and location. 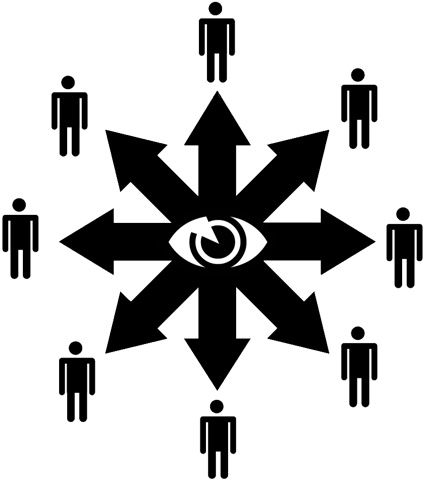 Since you’re French, i can’t help asking you about the French legislation, they have the reputation of being pretty intolerant towards P2P culture…

In France since 2004, the year of the first conviction for illegal download, P2P has been systematically associated with piracy. Many legal devices were then invented (such as Hadopi and Loppsi), that led to a massive criminalization of internet users, a legitimation of the monitoring processes carried out by some states (DPI), and the setting up by providers of systems to filter and block access to Internet.

Is this something that you and Brendan Howell (who is from the U.S. if i’m correct) kept in mind while working on the project?

We saw it as a kind of game. Ever since the beginning of the project, we anticipated the operating modes of the system so that we could be presentable regardless of the different ongoing pieces of legislation. For example, an encrypted connection to Sweden (Ipredator / the Pirate Bay) is used to anonymize each machine used in the project. Fragments of the files are encoded and remain on our machine only temporarily.

Didn’t you fear that you might get into trouble?

We thought about it, we were particularly concerned about the exhibition spaces, but the legal aspects are very schizophrenic. It is obvious that the peer-to-peer structures have positive cultural impacts and also often positive social ones. The same questions were asked with the arrival of photocopiers, audio cassettes, VHS, etc.. The main stumbling blocks remain the obsolete structures of film and music production.

Several studies have demonstrated that the biggest downloaders are also among those who spend the most on culture (cinema, concerts, dvd, etc.), the company that produces the torrent download software Vuze is also boasting similar survey conclusions.

Teachers will find on torrents content for their classes that their local libraries can’t provide. Recently, a list of the files downloaded by employees FBI leaked online.

With the hyper connected generation, a change is taking place and this change is obviously not just a technological one. In this regard, Michel Bauwens and the P2P Foundation study and communicate the alternatives in this field. They also explore transformative potential of P2P on the social, political, economic, cultural, educational levels. This is a pretty serious ideological trend that could take a growing part in the current debates.

The relationship to property and copyright has long been null and void. The past 15 years however (from Napster to EMule, Limewire or Mega) have blown up this contradiction in the digital domain. The right to exchange, share, re-appropriate or pool have become a space for a real prospective research. Russian artist Dimitry Kleiner has recently worked on a license, the Copyfarleft, that attempts to circumvent some limitations of the creative commons licenses and other copyleft approaches. 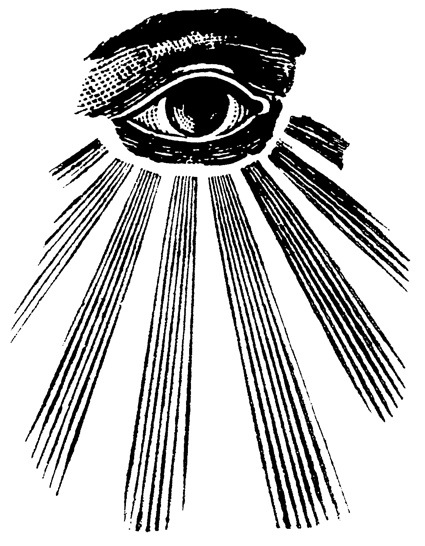 Is the work also a comment on the way p2p exchanges are vilified by the cinema industry?

Yes, the legal aspect is obviously closely linked to the film industry and to blockbusters. The Pirate Bays’ top 100 reflects the issue quite accurately.

These past few years, download has even influenced the film industry and the production choices of big studios. In addition to blockbusters in 3D, they now design films made specifically to be seen inside cinema theaters and during films events. And these lose some of their appeal when they are viewed on Laptop / Home theater.

The Pirate Cinema goes beyond copyright, though. It is at the crossroads of many territories (social, legal, political, aesthetic), it leaves room for many versions and sequels to come. 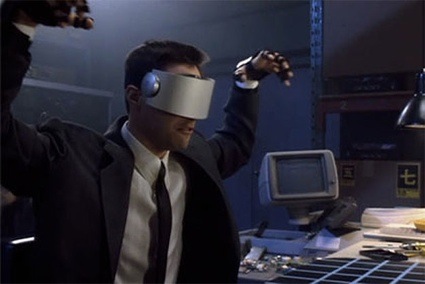 Did anything surprise you about the images displayed on the screen? For example, do the same faces of famous actors in blockbuster movies keep appearing on the screen?

– For example, one can clearly identify the formal leveling between all the TV series (framing, casting, expressions, etc.)

– At times, you can also see multiple versions of the same films, screeners captured in cinema theatres using different material and framing.

Is Sight and Sound the first place where you’re showing The Pirate Cinema?

I started toying with the idea in early 2012 without knowing whether or not it would be fully realizable. We developed a first proof of concept during the Summer of 2012 with Labomedia in Orléans by modifying an existing Torrent client software. Around the same period Julian Oliver introduced me to Brendan Howell and we started experimenting with the concept. Brendan has gradually developed a specific “python” program. It took us almost a year to finalize a functional and stable version. I presented the work in workshops and conferences in the meantime, but Sight and Sound is the first to exhibit the project as an installation. We are currently working on a second version of The Pirate Cinema which will take the form of a live performance.

You can see The Pirate CInema during the fifth edition of Sight & Sound, a festival produced by Eastern Bloc. Sight & Sound has kicked off a few days ago, it remains open until 29 May in Montreal, Canada.