A couple of weeks ago i took the train to Marseille to see the first monographic exhibition of works by Paul Destieu at the Galerie des Grands Bains Douches de la Plaine. The French artist has an uncanny talent for mixing time, space, rhythm, movement and emotions in a single work. The result is not only visually pleasant but it’s also critical, lucid and witty. I had experienced many of his installations over the years (mostly during my visits of the GAMERZ festival in Aix-en-Provence) and was eager to see how they would fit together in a solo show. 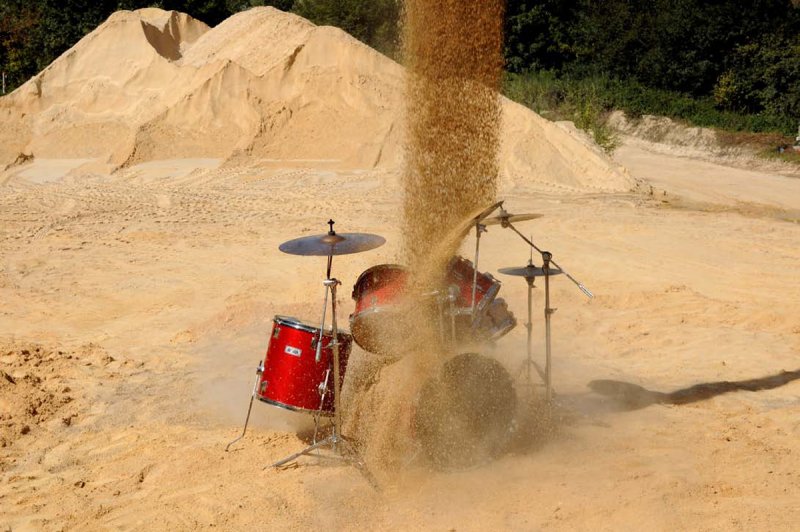 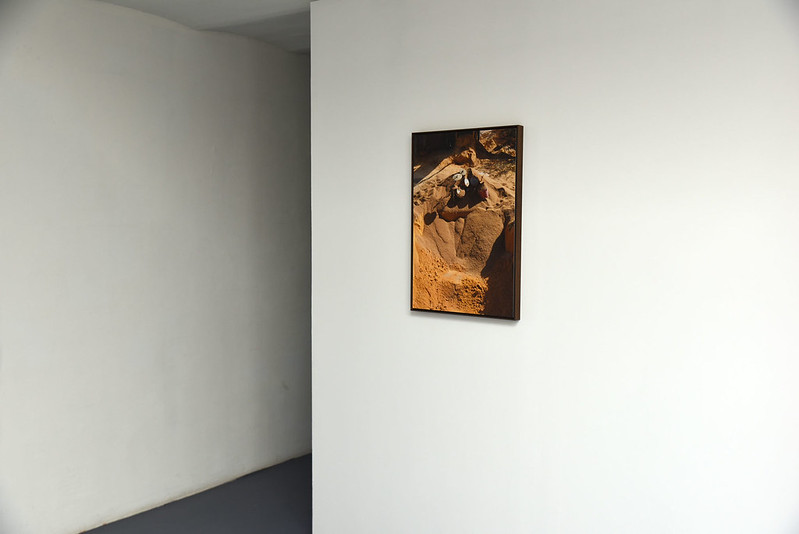 The show opens with a reference to one of Destieu’s most famous works: Fade-Out. The video shows the merciless burying of a drum set under gravels. The gravel hitting the percussion parts produces a rhythm section, which rapidly turns into a sound and visual chocking. It’s a bit like watching music being entombed alive. You’re upset but you can’t turn your gaze away from the spectacle until the instrument is completely covered and silenced.

Instead of a video or even a series of large scale photos from the performance, the exhibition presents us with only one still from Fade Out. Not even a big one. Just a photo that seems to suggest that there’s no need to dwell on past glories, that Destieu has far more than one string to his bow. 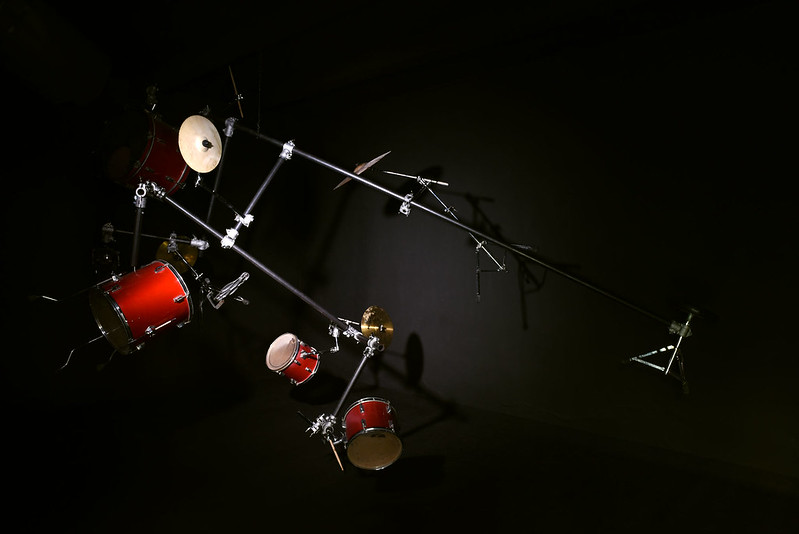 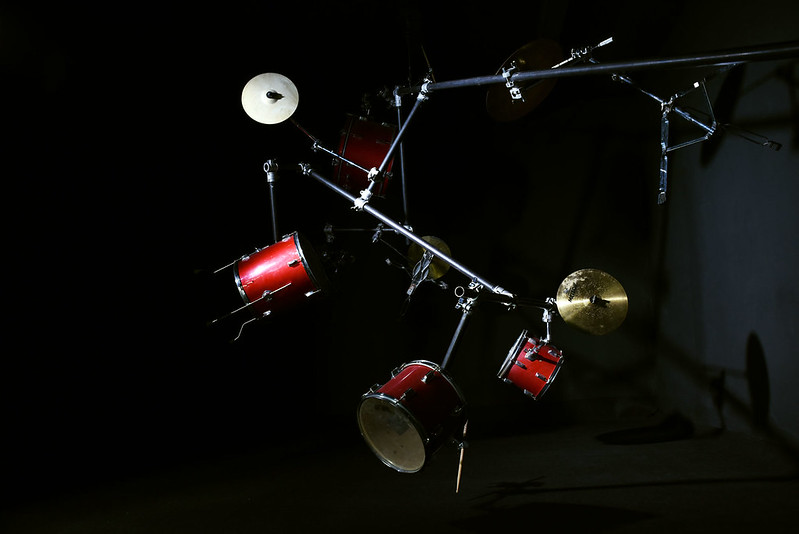 Which is sadly true for the musical instrument. The drum kit survived the barbarous burial to emerge again in one of the works exhibited in the gallery. Dismembered and suspended as a graceful mobile, it looks vulnerable. A kind of Calder kinetic sculpture powered by air or the push of a visitor’s hand. I wouldn’t mind a miniature version of it above my bed. The instrument still has rhythm and that rock’n’roll attitude but this time it’s purely visual. 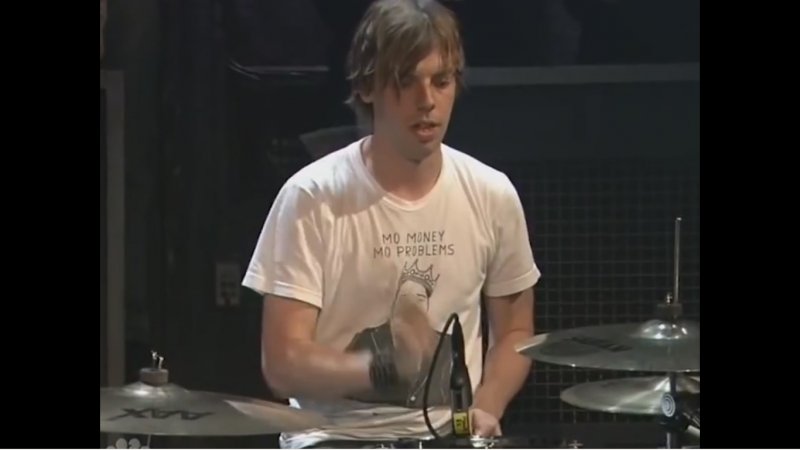 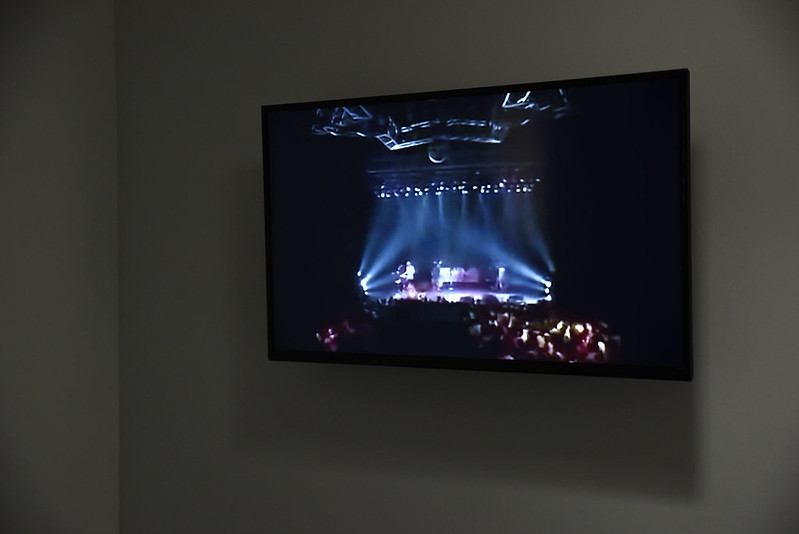 I wish the Shuffle video was available online because it is difficult to communicate the hypnotising effect it has on viewers. So i won’t even try… Shuffle is a video that collects snippets of youtube videos that document the brief moment in which a drum player clicks his drum sticks together to set the synchronization beat and kick off a live performance. Destieu assembled the video footages to form a metronomic trip through rock history. You can get an idea of it over here.

At this point of my visit of the show, i was starting to wonder why the artist keeps returning to drums in his work and how he manages to constantly reinvent their functions and forms.

What’s so special about the drum? Maybe it’s not the instrument itself but the brain of its player. Destieu is a drummer himself and drummers, a Swedish research suggests, have fundamentally different brains than the rest of us. Researchers at the Karolinska Institutet in Stockholm found a link between intelligence, good timing and the part of the brain used for problem-solving. According to them, using all the parts of a drum kit to keep one steady beat demonstrates intrinsic problem-solving abilities. Well i don’t know what problem the artist is trying to solve but i certainly enjoy his responses to it! 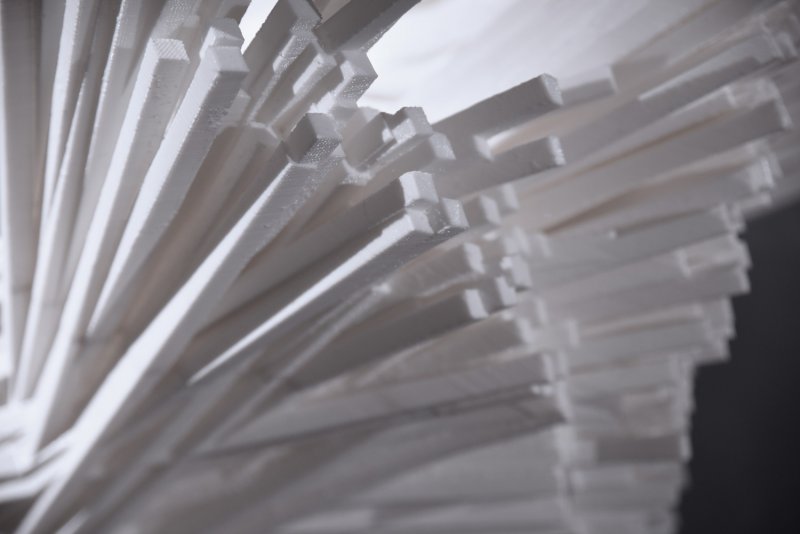 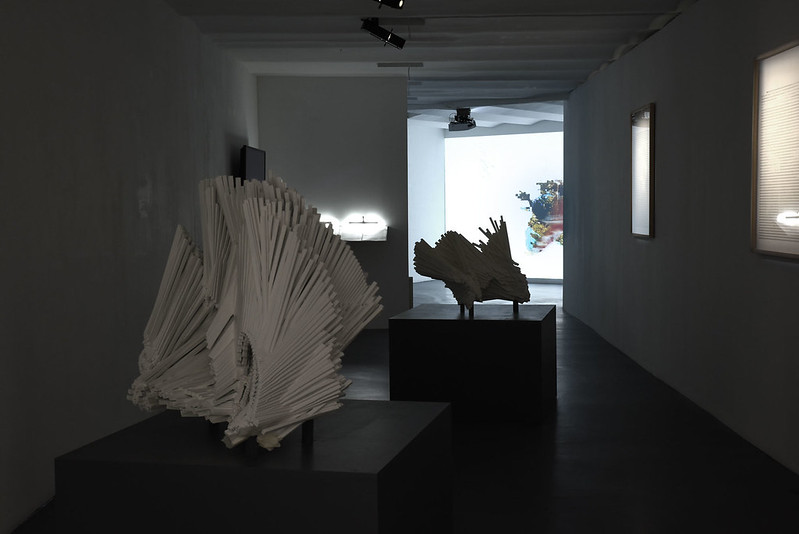 Archive d’une frappe (Archive of a beat) explores the materialization of sound and musical forms. Each of the sculptures records and decomposes the movement made by a drumstick just before it hits a cymbal.

The capture and the motion analysis of the musical gesture fleshes out the tensions between the musician and his instrument. Looking at the sculpture feels a bit like having the flicker fusion rate of a fly and being able to see the movement in slow motion. Or like propelling chronophotography in 3 dimensions.

Once captured, synthetized and 3D printed, the hit on the musical instrument is extracted as a physical counter-form both from the interpreter and the drumstick. 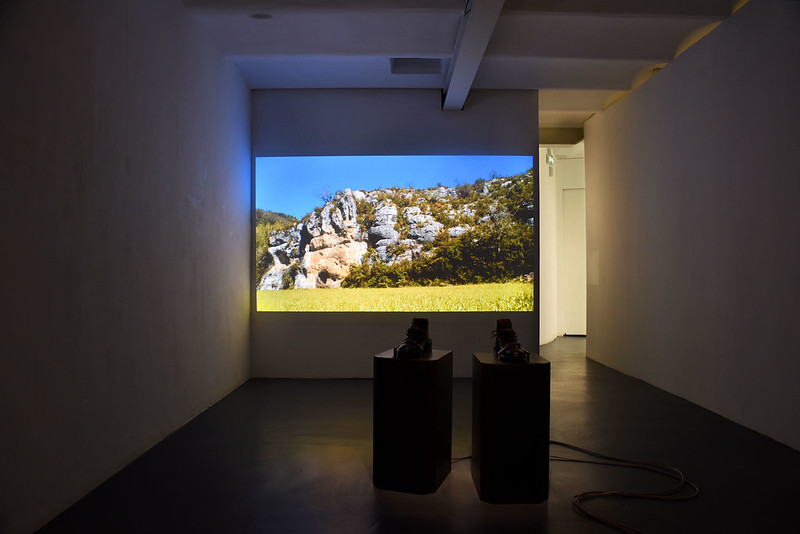 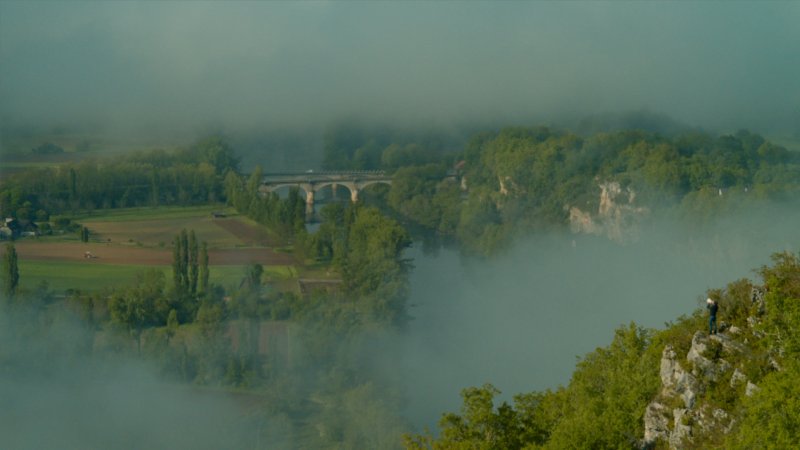 Between a per­for­mance and a making-​​of, the video Silence, ça tourne was shot on top of the Lot valley, an area in South West France with vineyards, stunning landscapes and barely any human life. The sequences, shot at a different location each time, show the area from dawn till dusk. Each one starts with the video maker shooting in a mega­phone: Silence, ca tourne! The expression is french for the cinematographic command Aaaaand… Action! but it can also (and quite literally) mean “Silence, it turns!” The call can thus be interpreted as an injunction to stay quiet and enjoy the scenery of the Earth’s rotation on its axis and its slow revolution around the Sun.

It also sounds like a distant echo of the famous Eppur si muove which Galileo Gallilei is attributed to have muttered after he had been forced by the Church to recant his claims that the Earth moves around the Sun…. 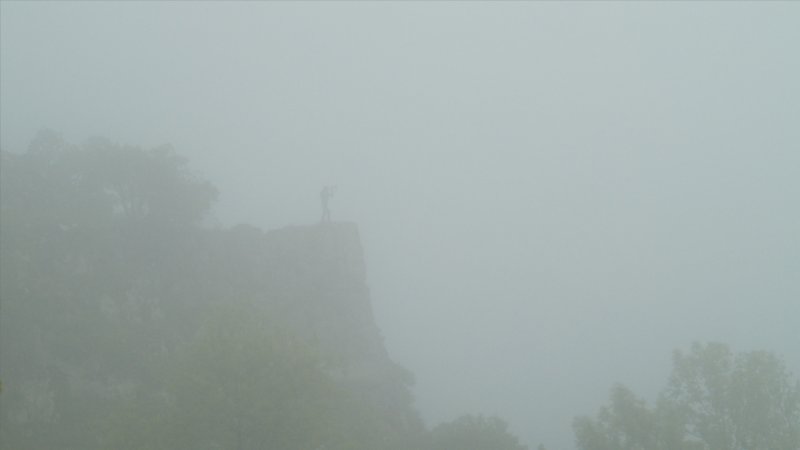 And since i’m on a “historical references à gogo” roll today, i also thought about the most famous painting of Romantic artist Caspar David Friedrich when i saw the scene above. Just a man, a precipice, the fog and the landscape. 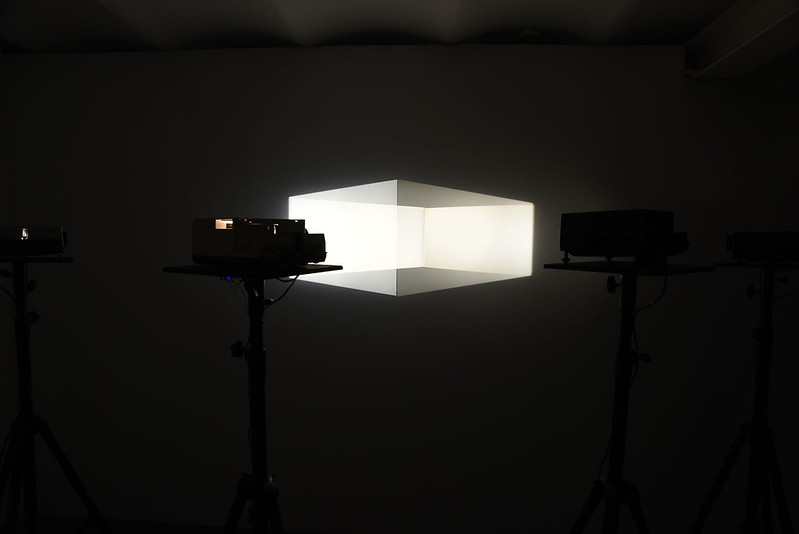 There are many other works in the show. I’ll end with Light Cube #3 because who knew you could suggest architecture with a bunch of good old projectors? The installation plays with the oriented projections of empty slide projectors. Instead of offering the usual frontal, two-dimensional projection, each trapezoid is distorted in order to model the respectives sides of an architecture made of light. 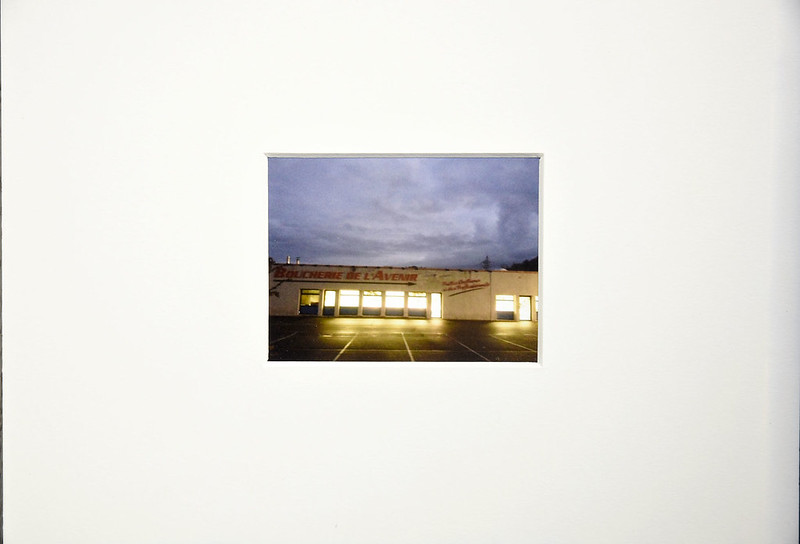 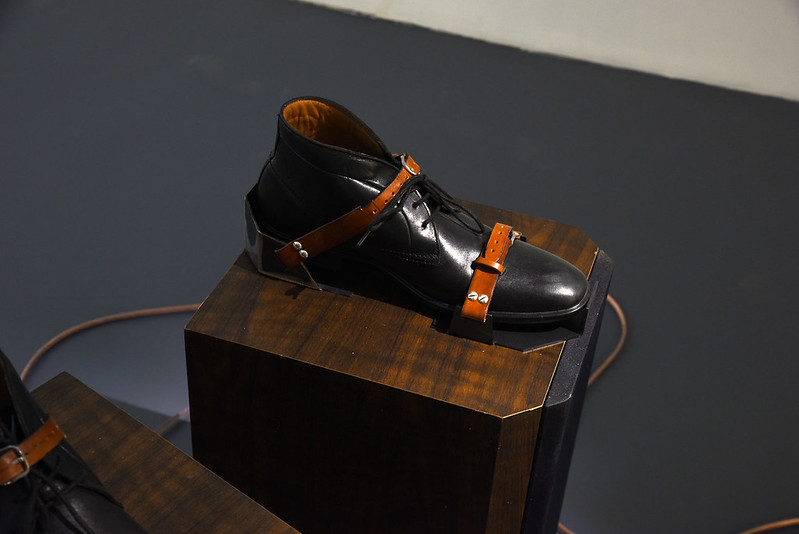 There’s only a couple of days left to see the works. Paul Destieu solo show remains open at Art-cade in Marseille until 28 September. The exhibition is part of the pre-opening of GAMERZ Festival’s 15th edition.