The Elementary Treatise on Chemistry, published in 1789 by Antoine-Laurent de Lavoisier, is considered to be the first modern chemical textbook. Until then, only alchemists were probing the secrets of the matter that makes up our world.

The Treatise is most famous for the law of the conservation of mass: “Nothing is created,” the chemist explains in the introduction: “In all the operations of art and nature, nothing is created; an equal quantity of matter exists both before and after the experiment; the quality and quantity of the elements remains precisely the same, and nothing takes place beyond the changes and modifications in the combinations of these elements.” Most of us sum up the law in a blunt “Nothing is lost, nothing is created, everything is transformed.” 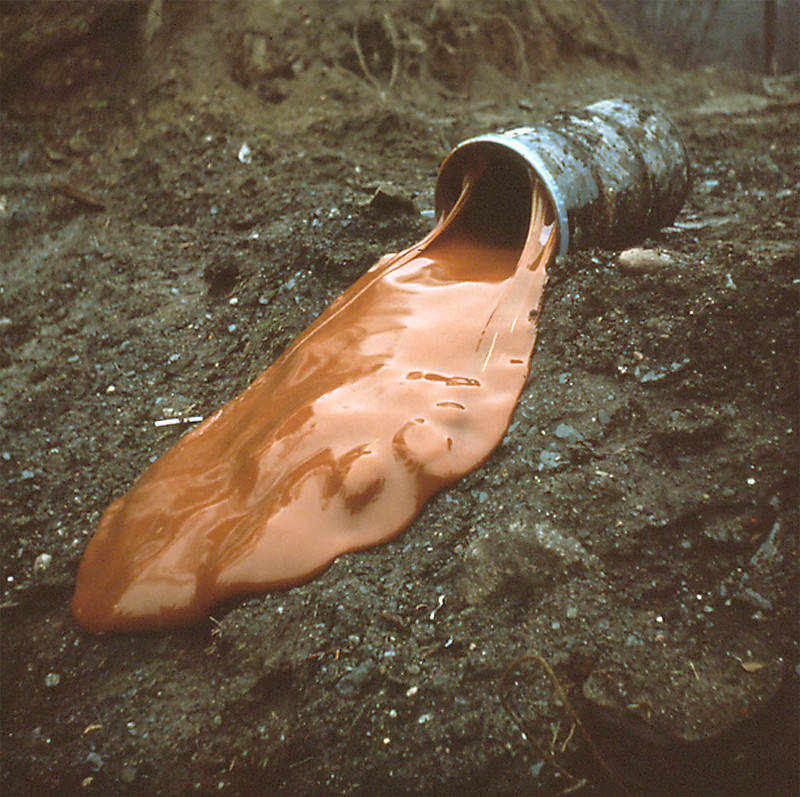 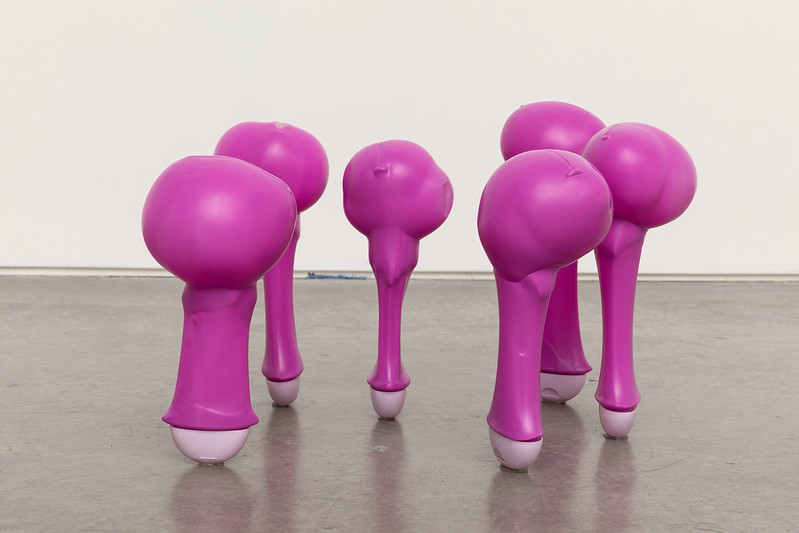 Nothing is Lost. Art and Matter in Transformation, an exhibition at GAMeC in Bergamo, is guided by Lavoisier’s principle. The artists selected in the show investigate a world made of processes, not objects. A world where matter fluctuates, shifts, mutates.

The artistic interest for the transformation of matter is nothing new: the Dadaists, the Surrealists, the actors of the neo-avant-garde movements of the ’60s and ’70s… As the exhibition demonstrates, they all experimented with chemistry. Today’s artists are equally fascinated by the transformation of matter but their research often ponders upon the detrimental effects that humanity is having on the world’s micro and micro equilibriums. This darker edge is perhaps echoed in the title of the show “Nothing is Lost”: it suggests deep concern but it also advances that we should not despair. Not yet.

The exhibition is divided into four sections, each dedicated to one of the four natural elements (air, earth, fire, and water) in association with the four different states of aggregation of matter (gaseous, solid, plasmatic and liquid.)

The section about water was the one that fascinated me the most. At the origin of all known forms of life and capable of formidable devastations, water is a chemical compound formed by two hydrogen atoms and one oxygen atom. 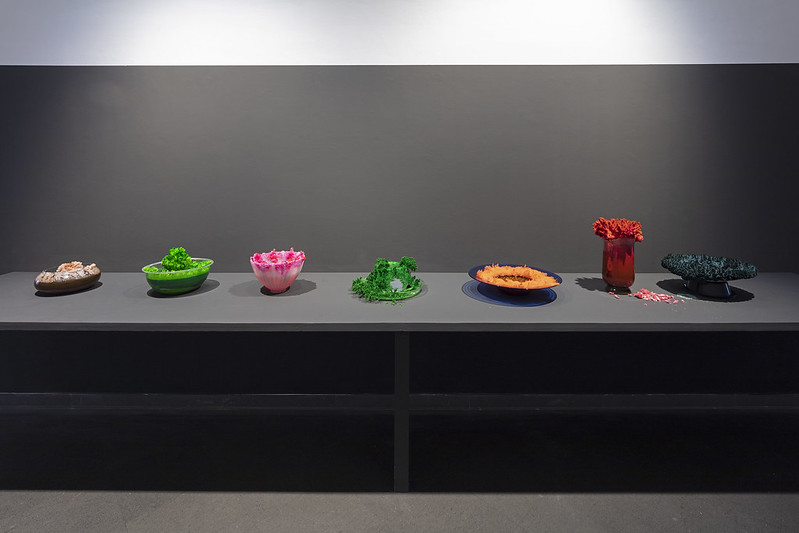 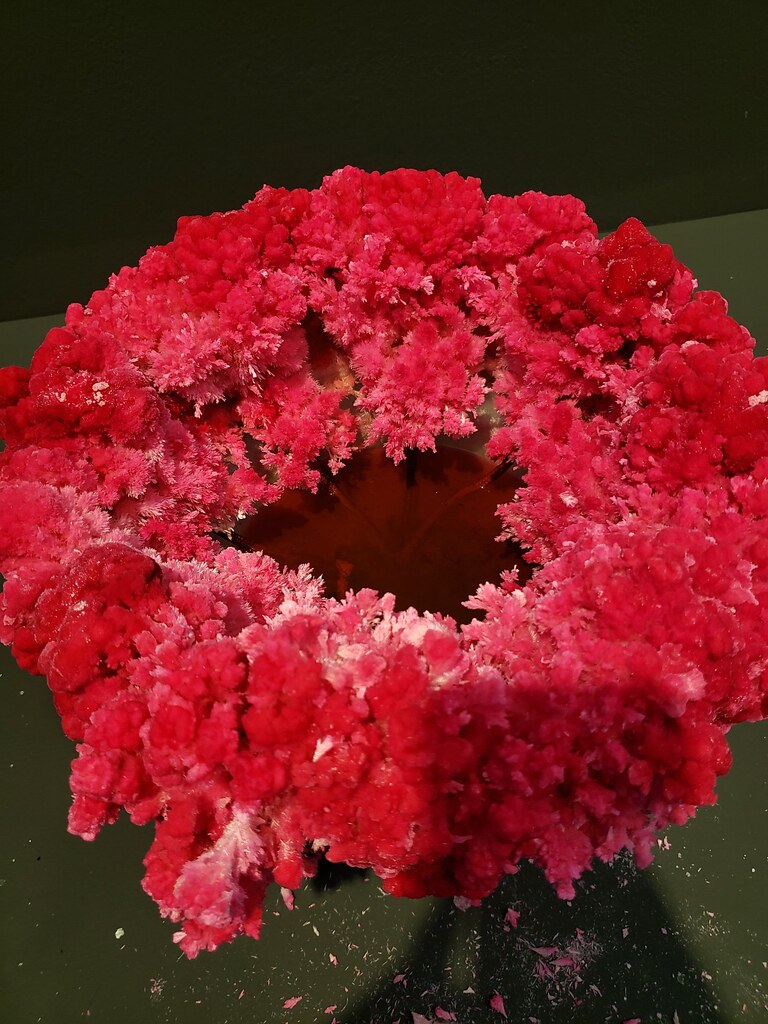 For the past twenty years, Gerda Steiner and Jörg Lenzlinger have been exploring urea: a nitrogen-based fertilizer widely used in intensive agriculture. Steiner & Lenzlinger’s Accelerated Spirits installation consists of bowls filled with urea-based fertilizer solutions, forced to crystallize progressively over the course of the exhibition. Chemicals have been added to give the crystal vivid colours.

Urea played an important role in the history of chemistry. In 1828, it was discovered that urea can be produced from inorganic starting materials. It showed for the first time that a substance previously known only as a byproduct of life could be synthesized in the laboratory without biological starting materials, thereby contradicting the widely held doctrine of vitalism, which stated that only living things could produce the chemicals of life. Urea is thus a symbolic link between the synthetic and the natural worlds. It is also an ambiguous compound: it is widely used to grow food but its production process involves the emission of CO₂.

Steiner and Lenzlinger‘s work takes the form of a chemistry laboratory where living matter is allowed to evolve chaotically. At the end of each exhibition featuring a work that involves urea crystals from an artificial fertilizer solution, the artists often dissolve them and use the solution for their next project. The process of growth and decline found in nature is thus repeated in their installations. 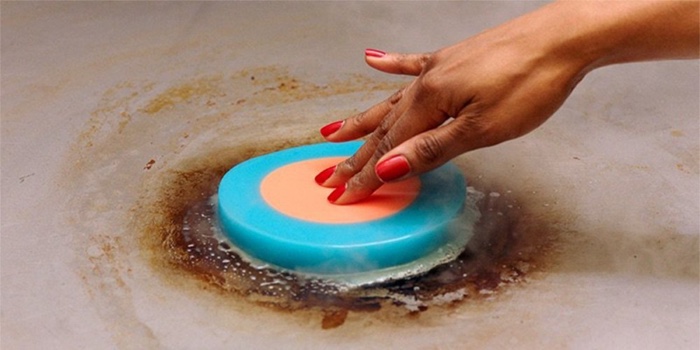 Spaghetti Blockchain! The title of the work encapsulates the atmosphere of a film where objects and material are in continuous (and mesmerising) movement. Natural phenomena take abstract forms and chemical processes unfold in block colours: solids melt, liquids fizzle then turn into gases, jelly is sliced, matter bubbles and evaporates. The short scenes then cut to a massive machine harvesting potatoes followed by documentary-style stills on the metal structures and complex wiring of CERN’s Large Hadron Collider. And then there’s the throat singer from the Tuvan republic. This audio element of the video triggers a kind of physical response in your body. As if the sound were material. Like spaghetti and the blockchain, the world is both material and immaterial. Even the intangible acts as a force that influences the operations of the universe. 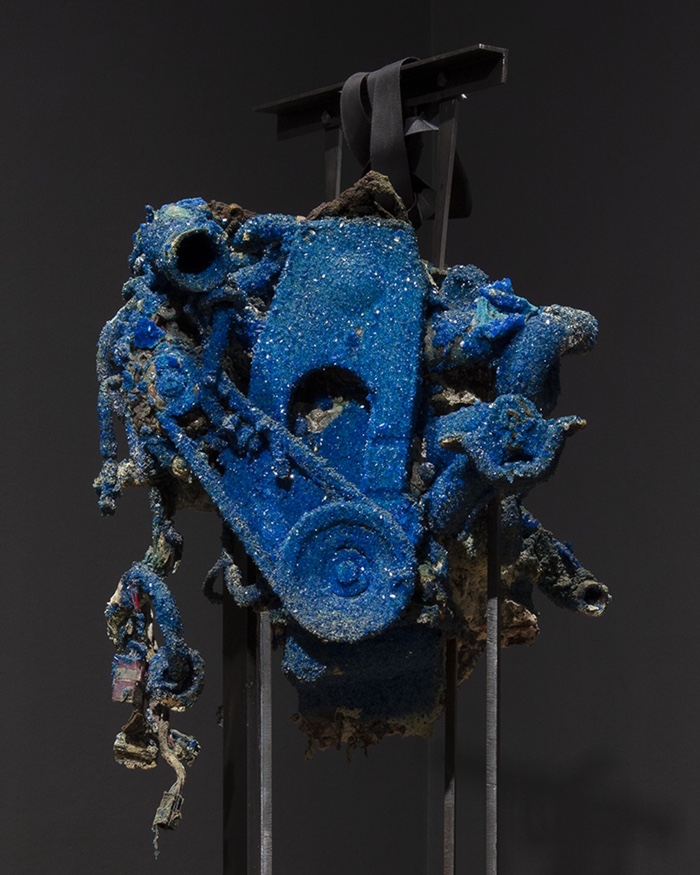 “With this work, I tried to create an organism, something that acquires life through a chemical accident,” Roger Hiorns explained. “An accident that perhaps reflects the randomness of the universe.” The chemical accident consists in immersing a car engine into a solution of copper sulfate mixed with water and brought to a high temperature. The contact between substances and materials triggers the crystallization process on the surface of the engine.

By delegating some of the creative processes to the crystal formations and embracing unpredictability, Hiorns suggests that the matter is “independent” and capable of taking the viewer by surprise. 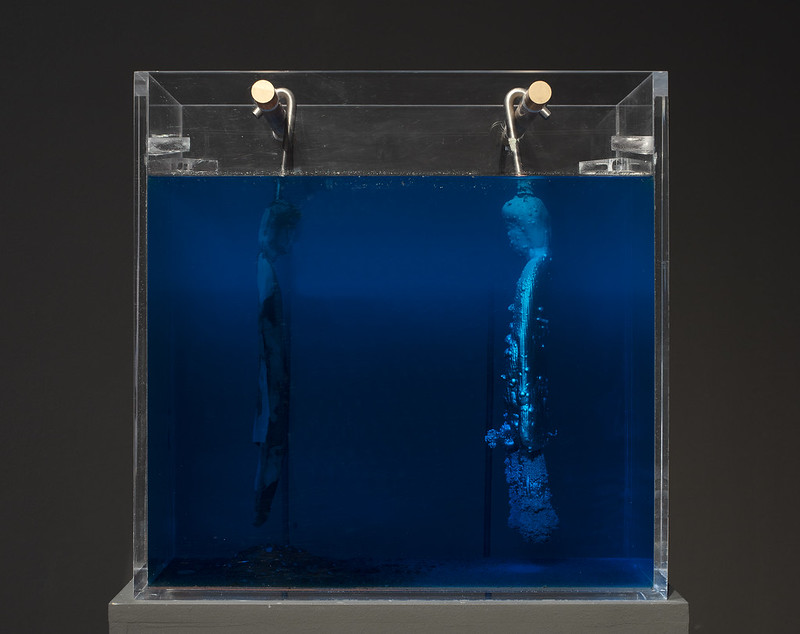 The Viandanti (“wayfarers” in English) are two copper sculptures made from the fusion of coins thrown by tourists into Rome’s Trevi Fountain. Immersed in a galvanic basin, they are connected to each other by an electric circuit that ensures a unidirectional exchange of matter: one figure continuously grows stronger at the expense of the other. It subtracts ions from its companion which is progressively wearing out.

The two small figures allude to the continuous transformation and regeneration of matter over time. 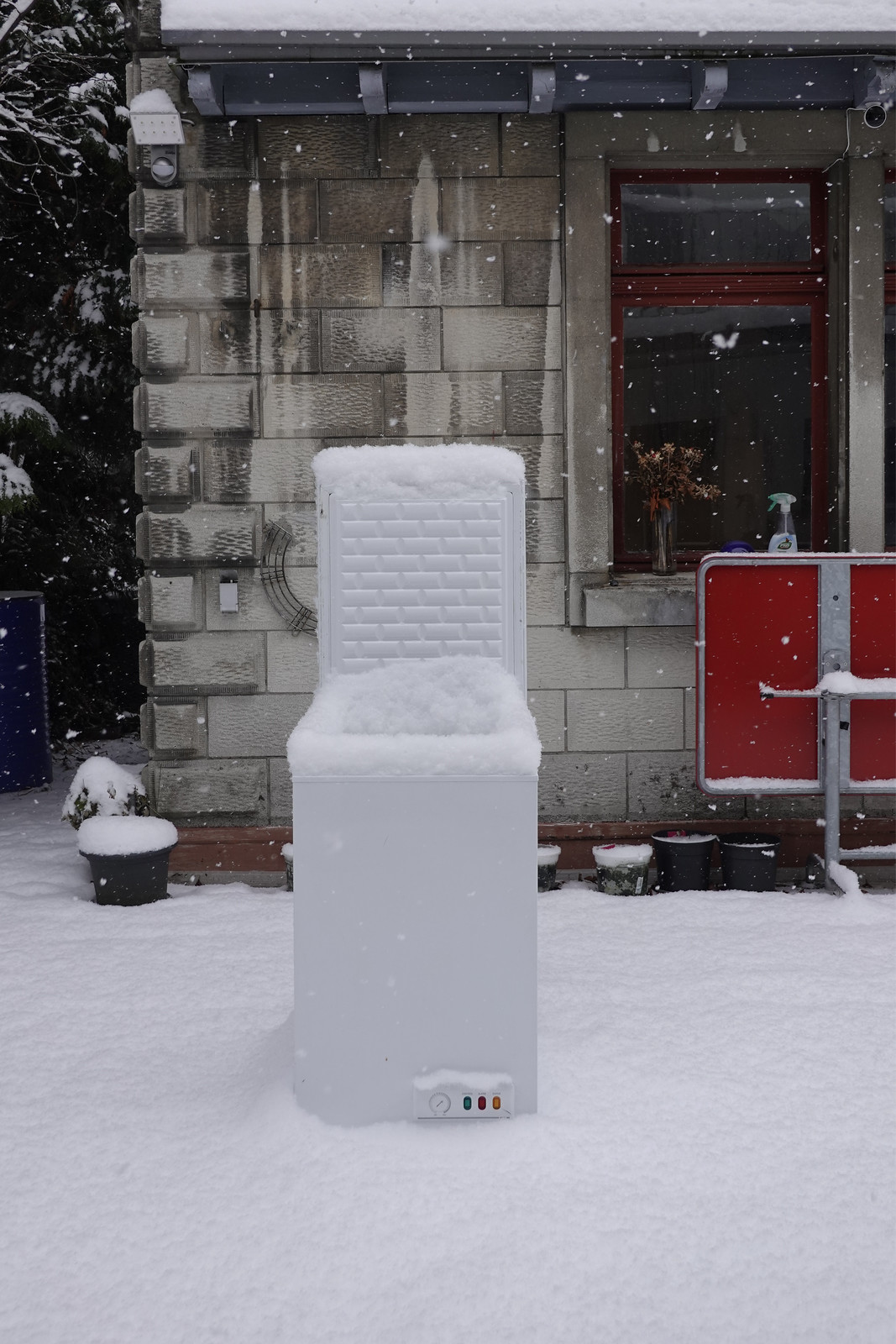 Roman Signer collected snow from his garden and placed it inside a freezer, with the intention of preserving it forever. Because the GAMeC is located in Bergamo, near the Italian Alps where mountain glaciers are shrinking, snow is turning pink and snowfalls have drastically diminished, it is difficult not to see in Der letze Schnee (“The Last Snow” in english) a reference to the ecological crisis. The fridge also evokes the (fallacious) idea that the salvation of Winter and the economy that accompanies it lays safely in the hand of technology. 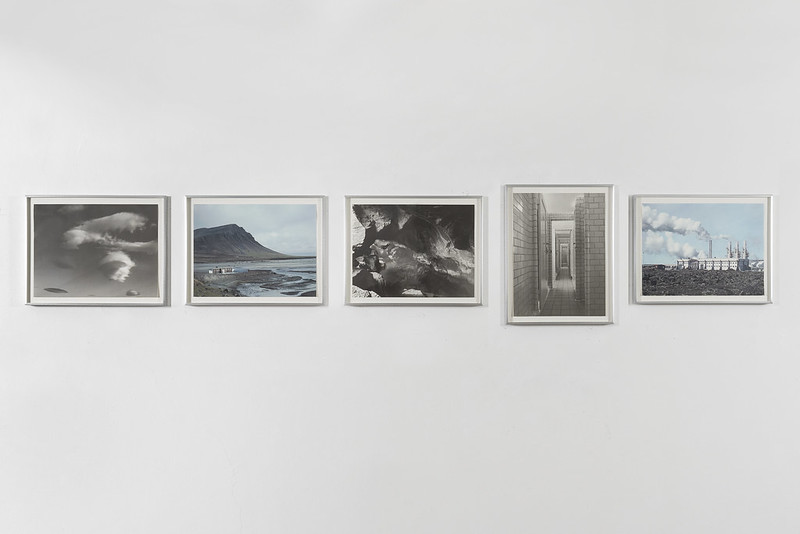 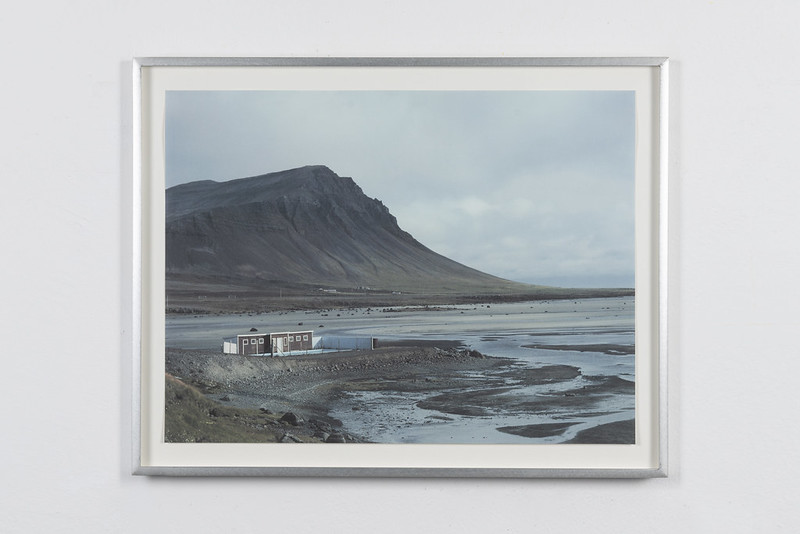 Roni Horn’s photos bring side by side the forces of nature at work and the human efforts to harness them. The images of the Hot Water Suite series alternate views of primary sources of energy -such as Icelandic geysers- with images of infrastructures engineered to exploit the same waters and vapours. 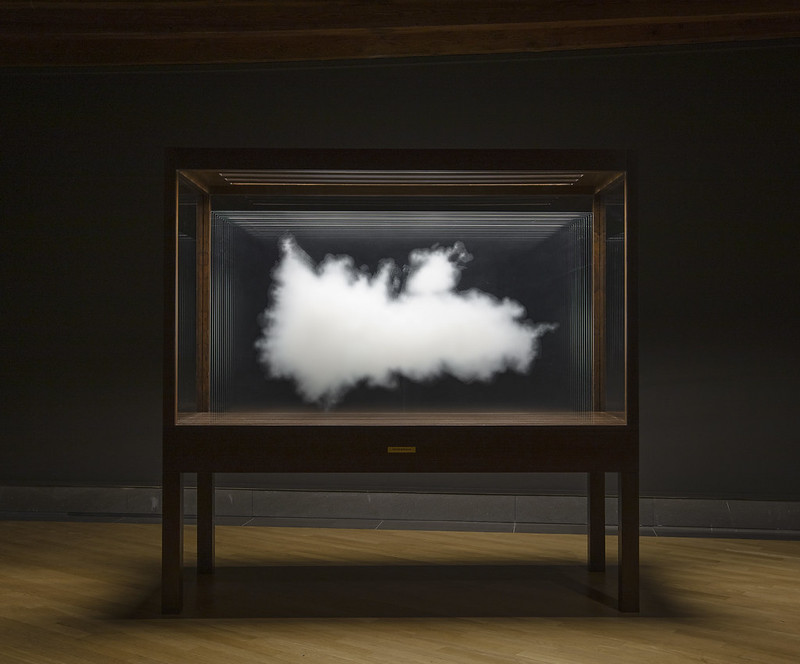 A cloud is defying the laws of physics inside a kind of reliquary. The cloud floats, captive and immobile, inside the heavy box. It is only an artifice though. The cloud is in reality a solid object made up of drawings on transparent overlapping panes of glass.

With this work (perhaps the most irresistible one in the “air” section of the exhibition), Leandro Erlich reminds us that everything is matter, even impalpable and shape-shifting clouds.

And if I have to highlight just one artwork I discovered inside the rooms dedicated to the “earth” element, it will be this photo of dust breeding: 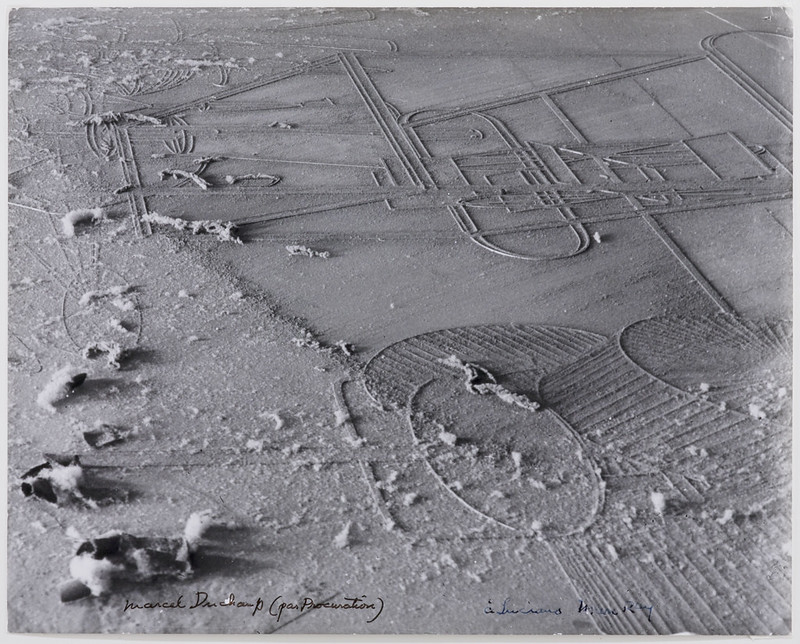 At the request of his friend Marcel Duchamp, Man Ray photographed The Large Glass after the work had collected a year’s worth of dust while Duchamp was in New York.

In French, the word élevage refers both to “elevating” and “raising,” to ennobling and bringing up. Thus, the author intended to emphasize the invisible presence of generative processes.

More images from Nothing is Lost: Art and Matter in Transformation: 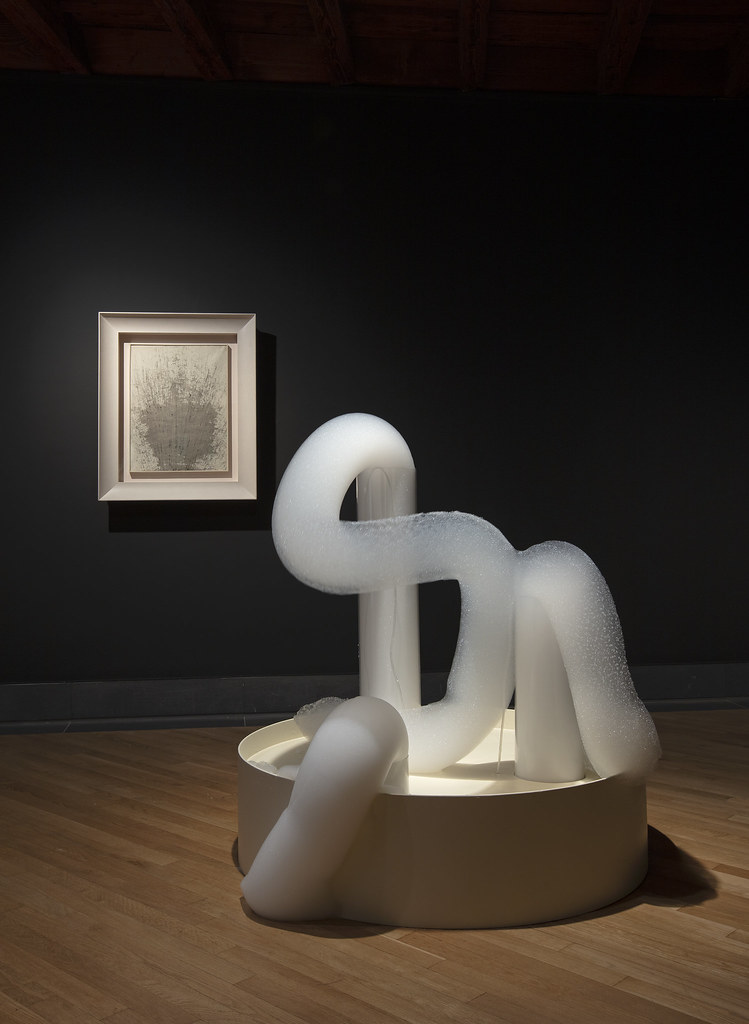 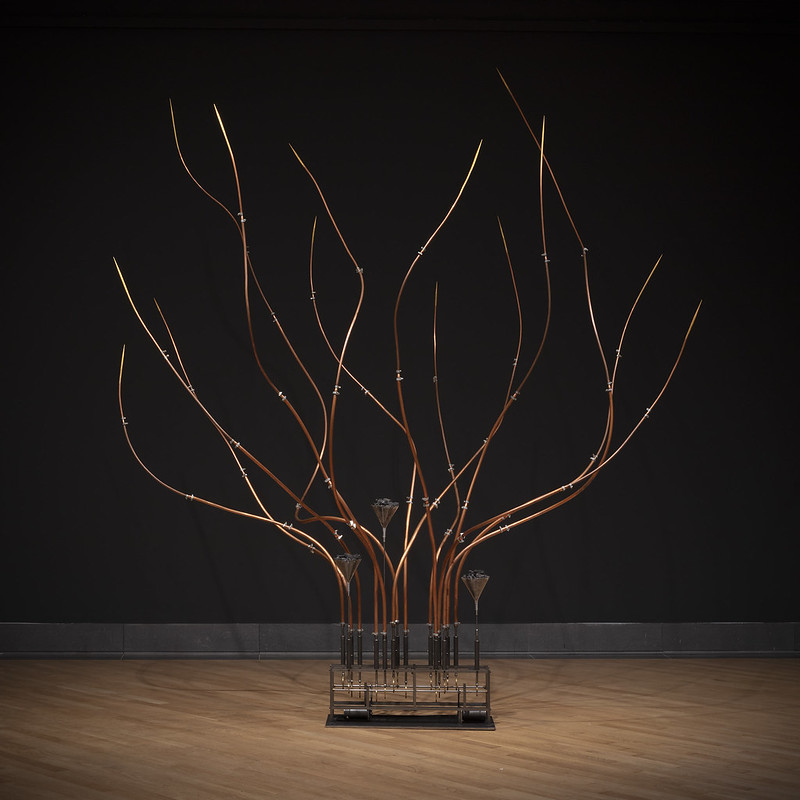 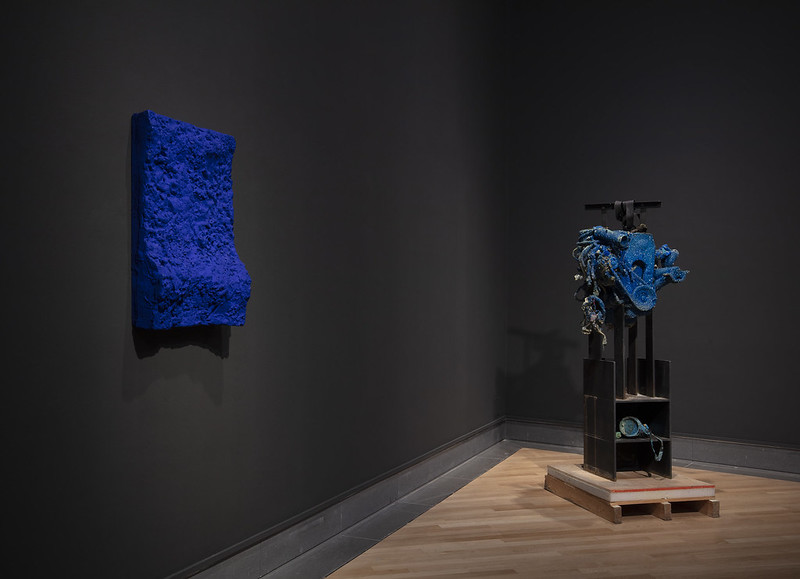 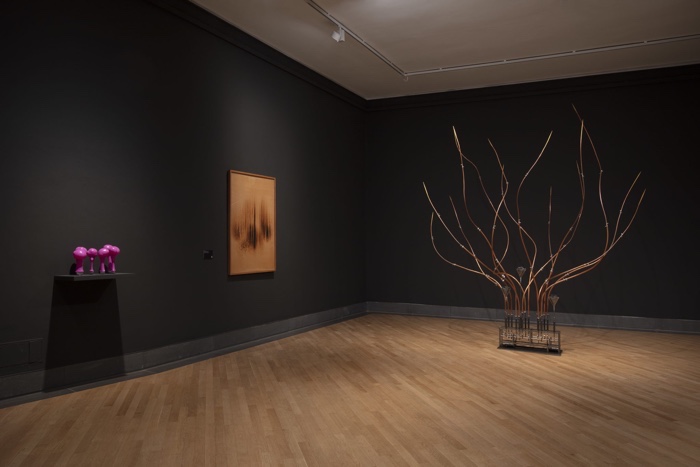 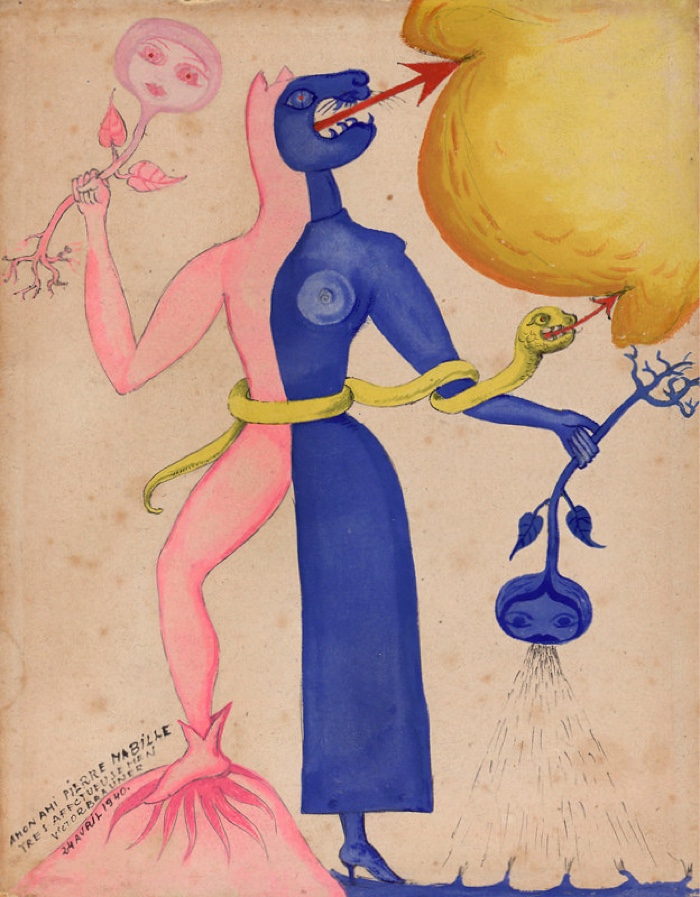 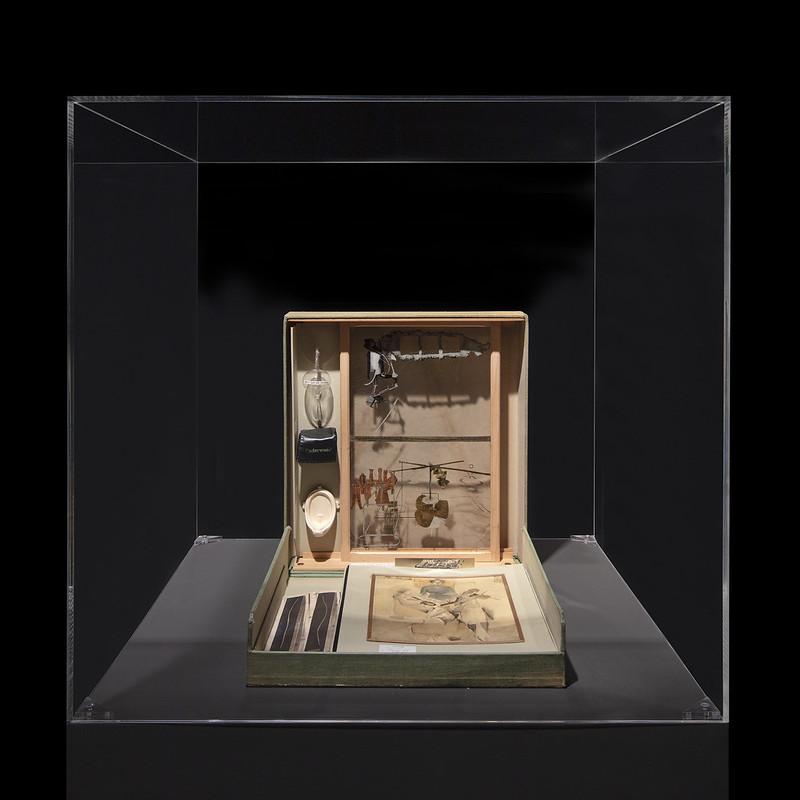 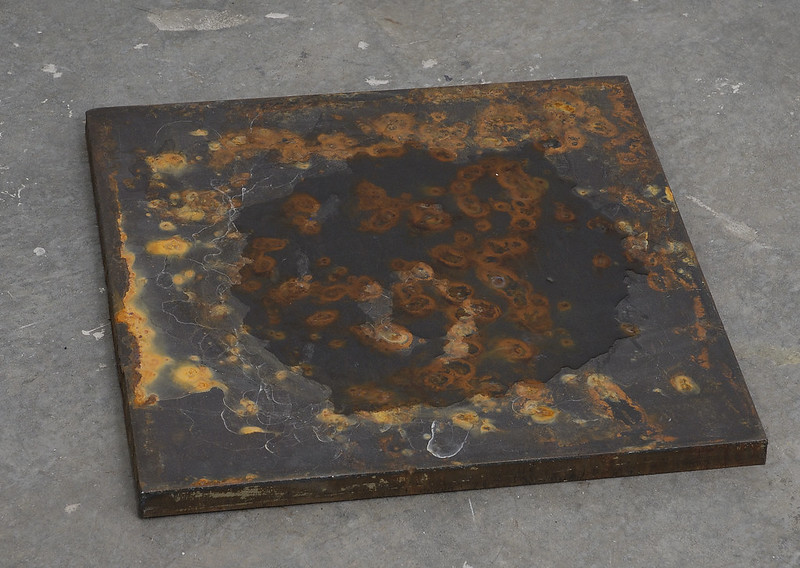 Nothing is Lost. Art and Matter in Transformation, curated by Anna Daneri and Lorenzo Giusti, is at GAMeC in Bergamo until 13 February 2022.

Previously: Alchemy. The Great Art, From swarms of synthetic life forms to neo-alchemy. An interview with Adam Brown, The Occult, Witchcraft & Magic. An Illustrated History.