Do you remember Technoviking? He was one of Youtube’s sensations in 2007. Millions of people admired his dancing skills and undeniable male magnetism but to this day, his identity remains a mystery. The technoviking video has been blogged, commented, shared, emailed and sparked numerous parodies. 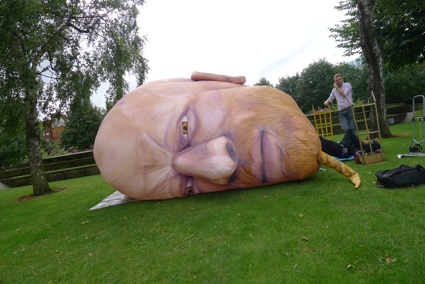 Wafaa Bilal has installed an inflatable Technoviking avatar at All Saints Park in Manchester for AND, the Festival of New Cinema, Digital Culture and Art (running this weekend and you should run there too if you can, it’s that good). The gigantic head is linked a twitter account and in order to breathe life into it, people have to tweet about it otherwise Technoviking will go flat and dance right back to oblivion again. So go and tweet #technoviking to keep him alive! 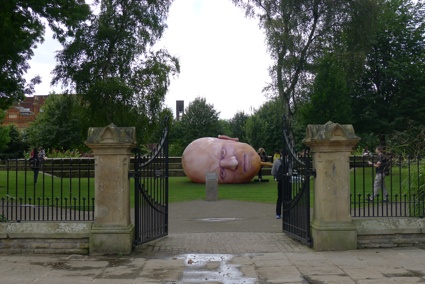 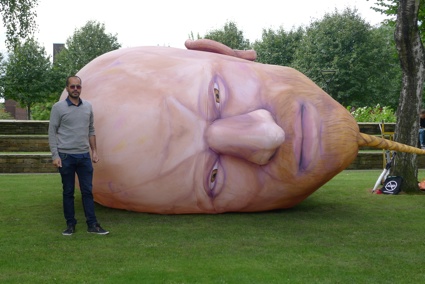 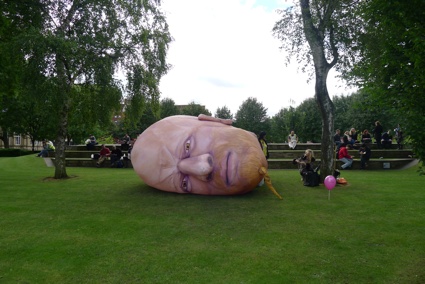 Pop culture and astute social comments cohabit in this work like in other works by Bilal. Meme Junkyard is fun and a bit silly of course but it also invites us to reflect on the promises of constant connectivity, on the meaning of ‘going viral,’ of generating almost unlimited levels of attention before fading back into disinterest. What happens to the technoviking (as well as to the other meme that will soon lay to inflate and deflate in the meme junkyard) is similar to what awaits our ego when other web users stop re-tweeting our rants, linking to our blog posts (oh please let that never happen to me!), or thumbing up our status on facebook.

And the one and only:

Wafaa Bilal is going to discuss his work this Sunday at Cornerhouse. The event is free.

AND, the Festival of New Cinema, Digital Culture and Art remains open all over Manchester until 2 September 2012.

Other works by Wafaa Bilal: Subversion in the Arab Art world, A few words with Wafaa Bilal, Book Review – Shoot An Iraqi, Art, Life and Resistance Under the Gun, Positions in Flux – Panel 1: Art goes politics – Wafaa Bilal, ...and Counting.