I missed the latest edition of the GAMERZ festival, the one and only media art event that 1. introduces me to at least half a dozen exciting artists i had never heard about before and 2. excites me so much that i eagerly spend 9 hours on 3 super slow trains in order to get there. “There” being Aix-en-Provence and Aix is never a bad idea in November.

The programme of the last festival was short but it featured a few artworks that looked worth an article on the blog. Julien Clauss had a particularly fascinating installation that creates invisible geometries and architectures with the help of little more than 30 good old radios and FM radio transmitters. 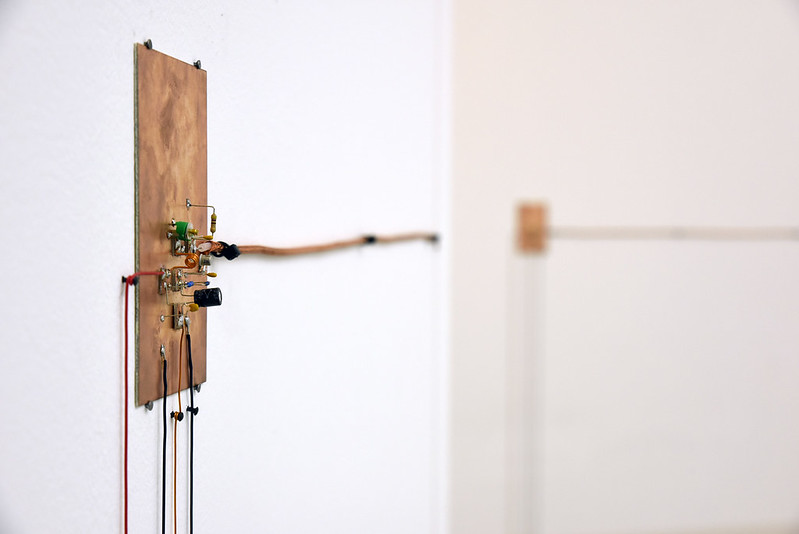 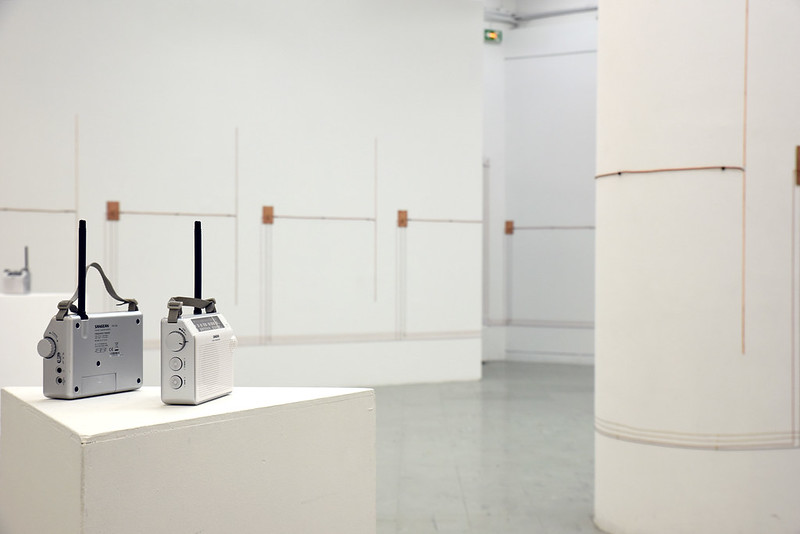 The artist turned one of the exhibition spaces of the spectacular Fondation Vasarely into a giant jamming room, a Salle de brouillage in french. He placed 30 FM radio transmitters on the walls. They are made of brass plate circuits and each of them is connected to an antenna, a power supply and audio players via a network of cables that crisscross the walls of the room. Each transmitter is tuned to a different frequency along the FM broadcast band (from 87 to 108 MHz), covering the entire FM band.

Visitors could pick up one of the portable radio receivers available, move along the space, play with the frequencies, scan the FM spectrum and uncover the invisible waves that occupy the space. By playing with the low tech devices, visitors could thus explore an invisible architecture shaped by the world of electromagnetic fields. 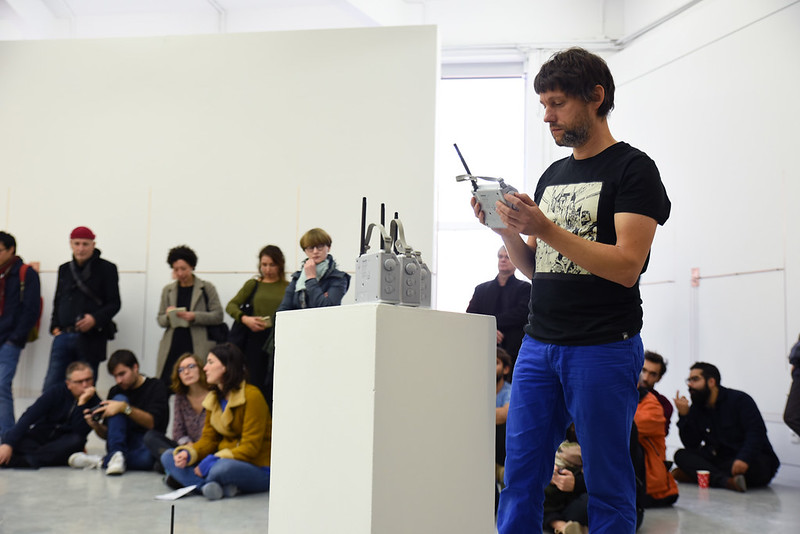 I got in touch with Julien Clauss who, between a residency in Chile and the installation of a new sound work in Montreuil (east of Paris), found a moment to answer my questions:

Hi Julien! Salle de Brouillage was installed at the Fondation Vasarely for the GAMERZ festival, a space that might have its challenges for a sound artist but that remains incredibly inspiring. Is the way you are going to install the work be influenced by the location?

The geometry of the room in which Salle de Brouillage is installed instructs the spatial deployment of the work, the pattern of the transmitter is repeated throughout the room by strictly following the architecture of the place. 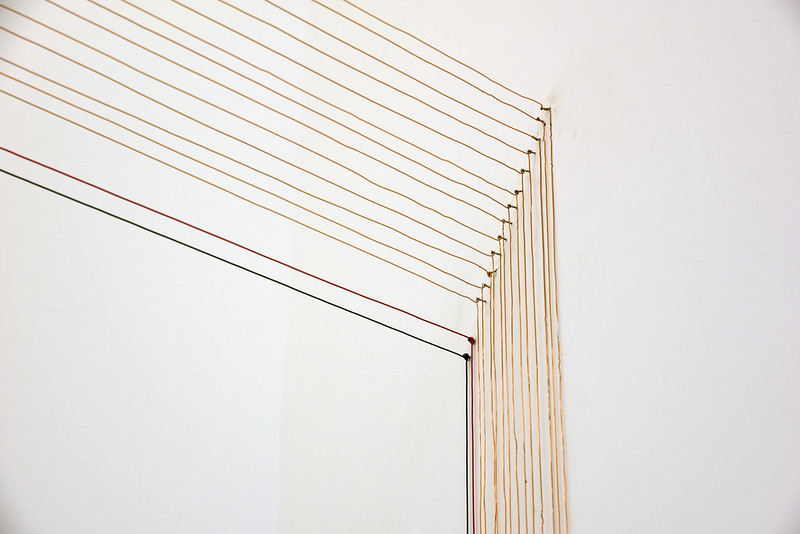 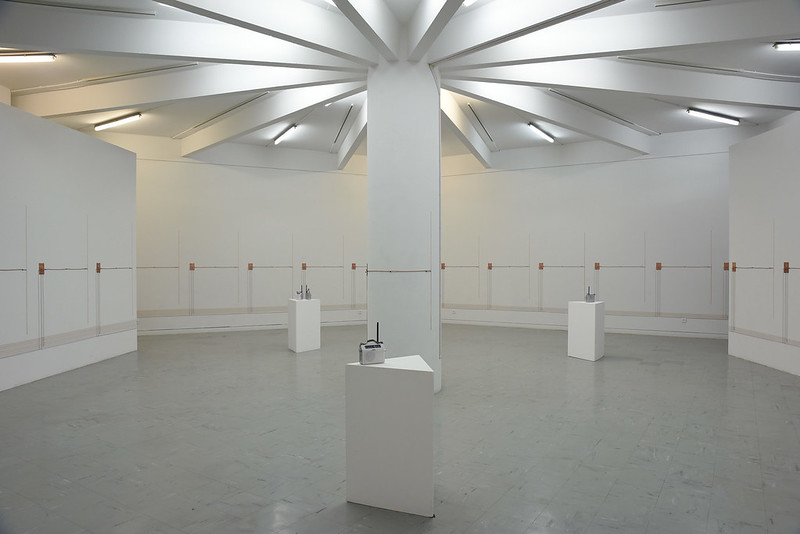 How site-specific is the installation?

Salle de brouillage is installed in relation to the architecture and the electromagnetic field of the site. The transmitters and copper cables follow the contours of the exhibition room like a tapestry and play with the spatial dynamics of the room. In a less visible manner, the radio emissions of the 30 transmitters meet the ambient electromagnetic field, a joint result of the emissions of the local FM stations, the filtering of the walls and the radiation of the electrical installations inside the building. The electromagnetic field in Salle de brouillage depends on the FM emissions specific to the installation as much as on the radio environment around and inside the building. 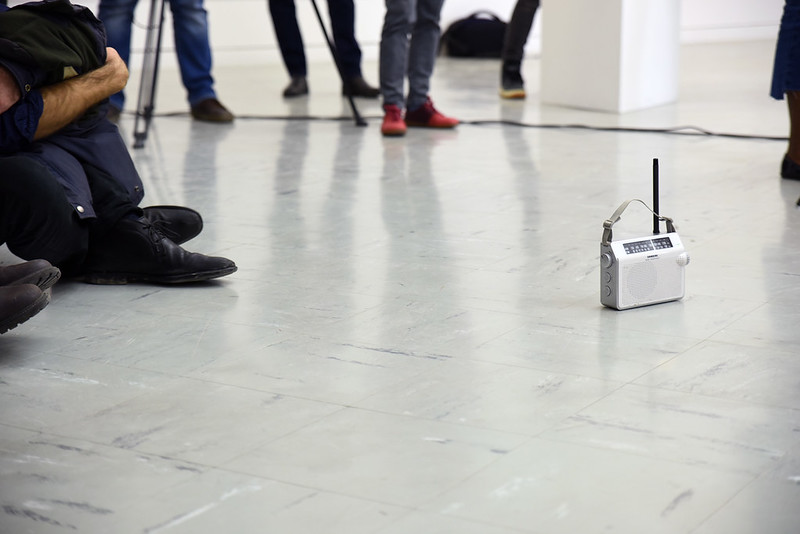 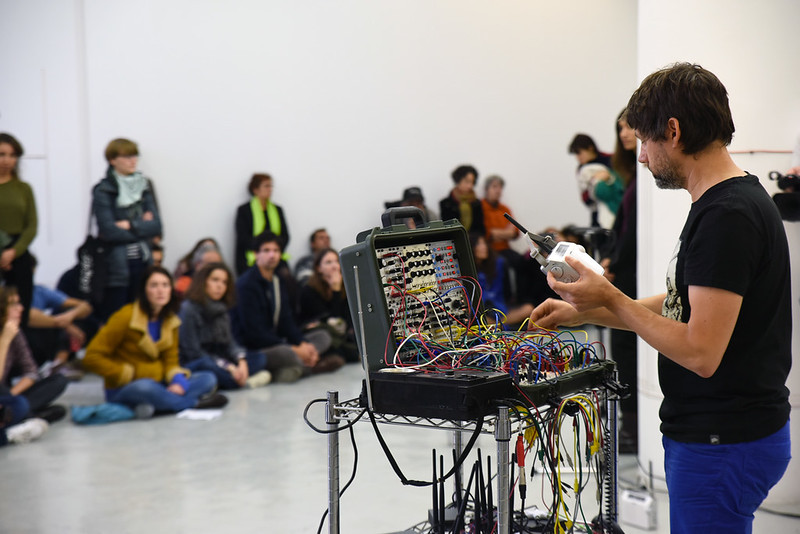 I like that you’re using portable radios. Why did you want to use devices that might look old-fashioned in today’s world of digital everything?

The first wireless transmission experiments date back to 1900, which makes radio the oldest of the “new media”. This is not the vintage aspect of the radio that interests me but the spatial and plastic dimensions of the media. I want to bring to the same level the structure of the media, its technology, the implicit hierarchical structures of the forms of networks as well as the sociability that these structures generate. Radio is a mundane object that makes it possible to get in touch with an invisible dimension of our environment which realizes a complex physical and geo-strategic space. 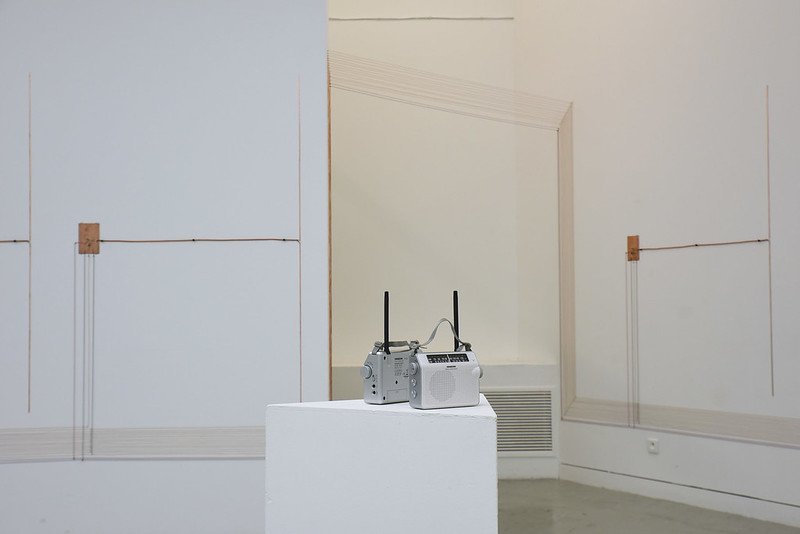 How did you select the sounds that visitors discover while navigating the space? Are they found materials?

How does the sound emitted by the radio sets evolve? is it just a question of turning the buttons on the devices or do the movements of the visitors influence the sound in the room?

The concentration of the emitters inside the same space produces mutual jamming. The field generated by the emissions in the room is an entanglement of chaotic waves. It is necessary to move around to receive the stations, some pop up very locally on an unstable portion of the frequency range, others in several places across the room. 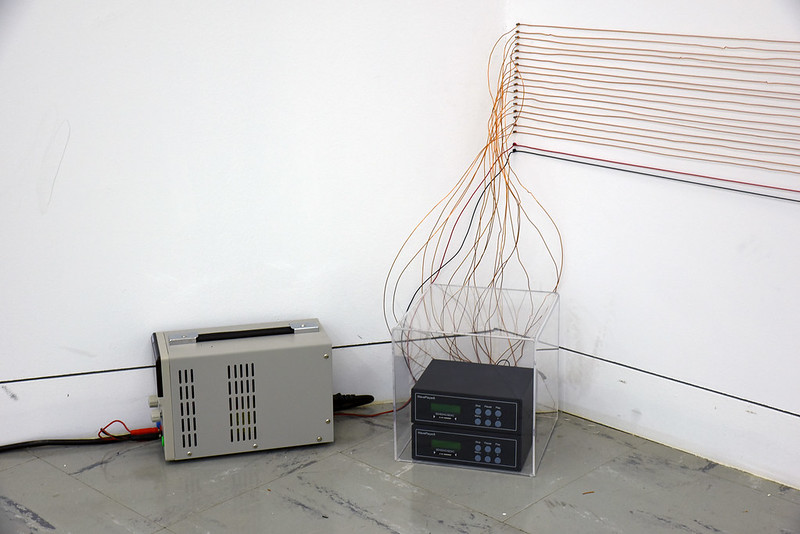 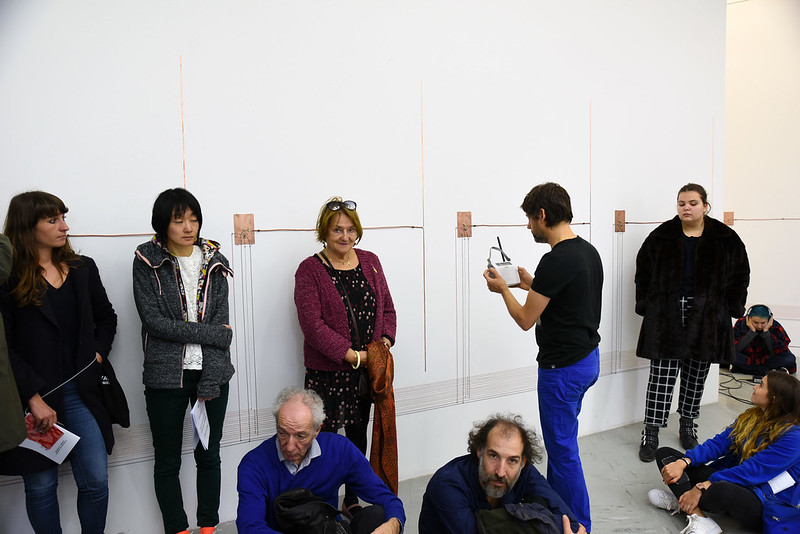 How does the “physicality” of the electromagnetic energy manifests itself to visitors?

The material and visual dimensions of the electromagnetic field interest me because they are an invisible component of our environment. The specific state of the electromagnetic field in the installation is a form of sculpture, which can be discovered with a radio receiver. The portable radio goes from being a media receiver to a tool that scans the surrounding space. Moving in search of waves while holding a radio in your hand is a sensitive experience of getting in touch with the invisible.

Salle de Brouillage was inspired by the media experiments of Tetsuo Kogawa. Could you explain the importance of his work?

Tetsuo Kogawa started a social practice of radio on a very small scale in the 1980s in Japan. It was based on the proximity between the broadcasting site and the listening site of the radio. He then undertook a performative work of building miniature transmitters with which he plays live while he is assembling them. By considering the carrier wave as a signal and the sound signal as a parasite of the carrier, he literally reversed the dialectic of the signal and noise in the radio.

The transmitters used in Salle de brouillage are designed according to a model that he has developed and shares freely. I place my radio sculpture work in the wake of the one made by Max Neuhaus. I started working on the layering and mixing of radio waves with Walk In Music, a cover of Neuhaus‘s Drive In Music (1967) I made on the island of Vassivière during a residency at La Pommerie. This first experience of mutual interference between transmitters, combined with the idea of composing a complete FM band, prompted the idea for Salle de brouillage. The design of Tetsuo Kogawa’s transmitter on a copper plate was perfect for this project. Emma Loriaut and I slightly modified the graphic design of the circuit. The work premiered in January 2018 at Centre Gallery in Quebec.

I found another of your works, Météo Mondiale, very moving. It’s hard to imagine anything more banal and boring that the weather news on the radio. And yet, we’re living in 2019 and the weather is now a topic that makes most of us anxious and afraid of the future. But there’s something very soothing, poetical and intimate about that piece. It also, as was your intention, makes tangible the relentless flow of information. I’m curious about the interplay between the weather data read out loud by Emma Loriaut and the “arpeggio of analog synthesiser.” How did you create the underlying sound work? Does it connect with the voice of the artist and the actual the weather data?

Météo Mondiale is an improvised performance. The data is extracted from the internet in real time, compiled, printed and read live during the performance. The prosody, the enumeration of the names and numbers of the weather report creates a distance to reality. This creates a textual material that is shaped in parallel to the synthesizer line that is also improvised throughout this dialogue. 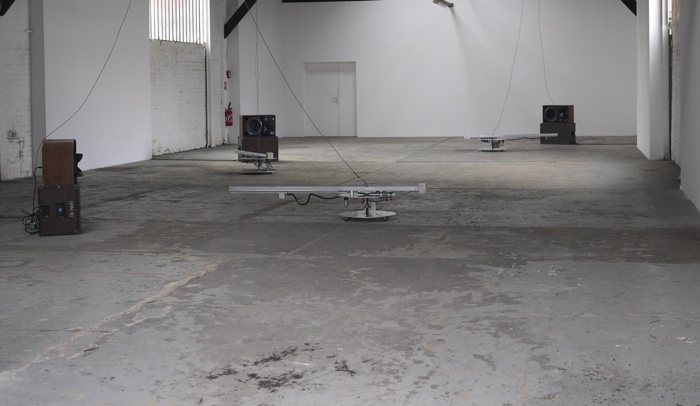 The exhibition Ground Noise at Instants chavirés started a few weeks ago: 3 laser distance sensors, each 3 meters in diameter, read the contours of the concrete slab on the floor of the old brewery.

If you understand french and want to see the installation ‘in action’, check out this interview with Julian Clauss. He talk about Salle de Brouillage, old bearded composers, black boxes and media reappropriation:

The 14th edition of the GAMERZ festival closed last December but if you’re in or near Paris, you have until 26 May to experience his installation Ground Noise at at Instants chavirés.