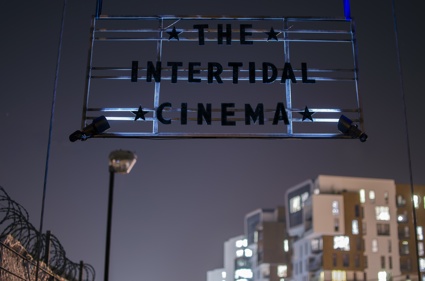 Over the years, Burnham-on-Sea, a seaside resort in Somerset has been regularly affected by tidal flooding. As a response, a high wall was erected along the coastline, returning waves back to the sea. The 1.6 kilometres long and 3.2 metres high sea wall regulates access to the sea by a series of raised steps and vehicle access points which can be closed during storms. 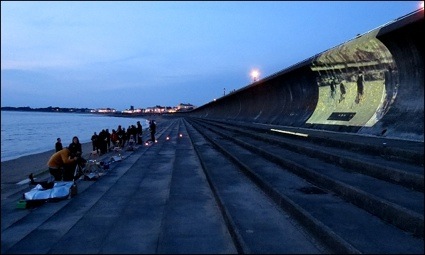 As part of her BA Design course at Goldsmiths, designer Hannah Fasching decided to make use of that gigantic wall and reacquaint the inhabitants of the town with the intertidal zone, the space between the high and low tide. She organized a screening along the sea wall, using footage shot in the 1930s, before the wall was built. The films shows how people used to ride bicycles and do sport on the beach and how in the past, the seafront functioned as a vibrant cultural hub.

The project, called the Intertidal Cinema, established a conversation with this architecture of control and neutralization. It also looked at how new relationships can be established between humans and the temporary spaces provided by nature.

Can we continue to exist within an infrastructure that seeks to not only resist, but nullify natural forces? How might we approach increasingly fragile sites in a way that challenges the inherited attitude of conquering nature as though it were an opponent? Can the temporary spaces that occur naturally in the environment provide us with a new way in which design can operate?

Hannah has recently exported the project to London. For three nights, she turned the tidal beach of Deptford creek into a social space. I caught up with Hannah to have her talk about the project in general and about the film she projected in Deptford.

Hi Hannah! Could you first tell me again the story of that beautiful vintage cinema sign we see emerging from the water in Burnham-on-Sea?

The first Intertidal Cinema took place in Burnham-on-Sea’s intertidal zone, between high and low tide. We stood the sign in the mudflats on the beach at low tide. What we didn’t realise at the time was that the speed of the tide coming in depends mainly on the bank of the beach and that the flats being ‘flat’ submerge within minutes. Thinking we had time to play the film and collect it afterwards, at sunset, just as the film began playing we turned around just in time to see a wave sweep away the bottom rung of letters. And a few minutes later the whole sign was submerged; an unexpected but appropriate demise. 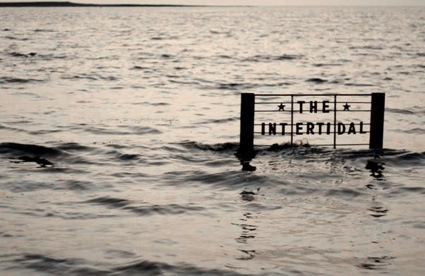 What made you chose Deptford Creek for the second edition of the IC, rather than any other area by the river bank?

Deptford is at a pivotal point in its history, the waterfront that I remember less than a year ago is now unrecognisable. As a former royal dock, it has evolved from an area defined by its natural topography into an area characterised by rapid urbanisation and gentrification.

In Deptford, much like in Burnham, there is an abrupt contrast between the natural and artificial landscape though the artificial is much more dominant here. The tidal river, Ravensbourne runs from the Thames through Deptford and creates an intertidal zone fluctuating 7m in the heart of Deptford.

As a project that explores this relationship by creating social spaces in temporary environments, taking the project to Deptford meant it developing in a new way. 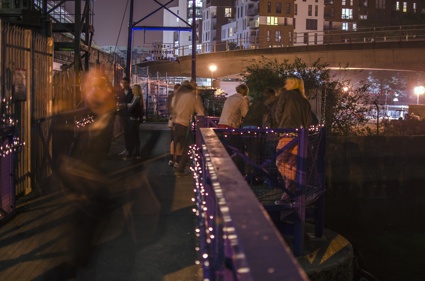 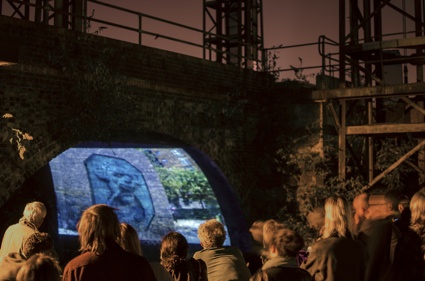 I’ve never been there but i had a look on google image. It seems to be a radically different from Burnham. How is the tidal creek of Deptford used now? Is there any social activity there?

Things do happen here, but many are not specifically tied to the river. There is a big community of artists along this part of the river, with studio spaces and galleries as well The Laban Dance Centre, which was built 11 years ago.

The creek creates a unique wildlife area which the local authorities are keen to preserve. The creekside centre, an educational facility, provide tidal walks once a month on the creek. The ahoy centre, a charity in Deptford based on the waterfront, encourage water activities and sports on the river. The Ha’Penny hatch bridge, which can open to allow boats to pass, is a public walkway with many commuters passing over every day. The creek runs underneath this bridge. 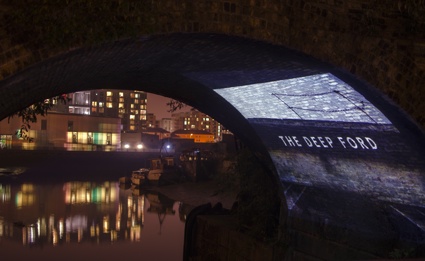 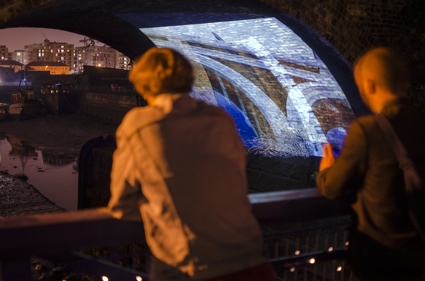 How did you make the space more comfortable and enjoyable for people?

Holding a cinema in an area where it doesn’t normally function instantly transforms it. Using the bridge as a watching platform, we projected onto structures which faced out onto the creek. One of the projections leaned out over the bridge, projecting vertically onto the water. The cinema took place as the tide was going out, as the water emptied from the creek the projection became clearer, until it eventually hit the rocks below the surface. The tide became the factor which focused the image.

Could you talk to us about the Deep Ford film? It seems to be very different from the film you showed in Burnham.

The film in Burnham consisted of archive footage, a window into the history of the seafront before the wall.

In Deptford it’s more of a contemporary take on gentrification and how the area has developed relating back to the history of the dock.

The Deep Ford is a reference to the ford on which Deptford developed. The film shows historical architectures and landmarks around Deptford, many of which played an important part in the shipping industry. Voices of people who were interviewed as part of the project are used to animate these architectures, each voice representing a different place, as though the places are talking to you. These people are people who live, grew up and work in Deptford, but also people involved with how it’s changing such as redevelopers. The physical space starts to take on the voice of the social. 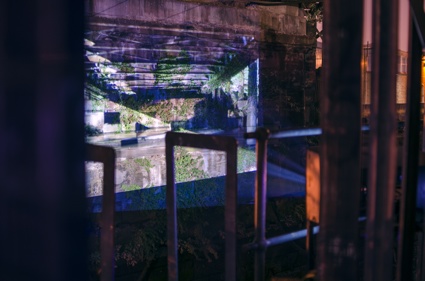 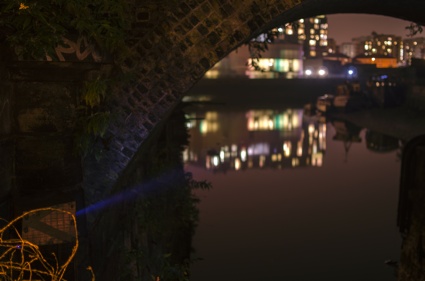 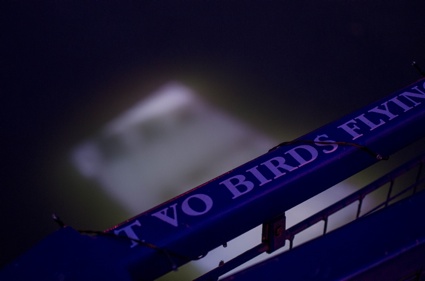 Why do you think that it is important that humans (re)connect with natural forces?

To use a quote from Wendell Berry, a poet, environmental activist and cultural critic:

“The cities have forgot the earth and will rot at heart till they remember it again.”

In its broadest context the project is about climate change, though it addresses in a different way than a project that might involve weather robots and cloud seeding. I think what is required is an increased understanding of the natural environment, but it seems to me that the well documented expansion of cities is fundamentally incompatible with this. A city is essentially a hardscape.

Using an extreme example; Tokyo as a city sitting on a tectonic boundary, is in permanent conflict with it’s natural surroundings. The strict building codes in Tokyo mean that the architecture responds the the natural surroundings. Building foundations are built to move with seismic activity. If our natural environment is to be increasingly volatile, a failure to understand and act in relation to it will only ever cause problems.

The Intertidal cinema that took place in Deptford works in direction relation to the tide, using this force to focus the image of the projection.

Your project explores ways for people to “experience the extremes of the environmental conditions’. Is that out of concern for the future of a country threatened by sea rising?

It can’t not be. The project began by documenting an area of land artificially lower than sea level, and suffers from flooding as a result (Somerset).

If the sea is rising what will our relationship with it be?

I think this is already happening, this relationship is being configured through sea wall’s and flood defences. Whether it’s on the coast in Burnham or in the city of London. They both dissolve the relationship with the water and are also potentially apocalyptic because of the risk of them failing.

What’s next for the Intertidal Cinema?

Following on from the last answer, I see the project developing towards larger scale responses to the temporary spaces in the natural environment.