Flone is a drone (an unmanned aerial vehicle) which uses a smartphone as a flight controller and explores novel ways to “occupy” public space, in particular the air and claim the right to use it before legislation makes it illegal. 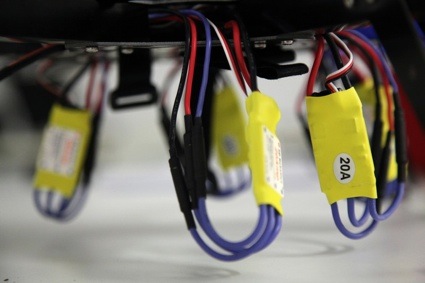 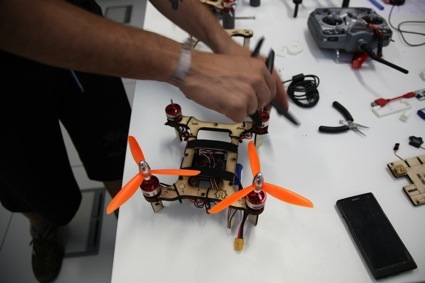 Created by artist and computer engineer Lot Amorós, technical engineer Cristina Navarro, and industrial engineer Alexandre Oliver, Flone turns the mobile phone into a stand-alone flying apparatus which can go up to a height of 20 metres from the ground, come down, rotate and do the usual smartphone tasks, such as taking photographs or video recordings. It can also be remotely controlled by another smartphone with a wifi or 3G connection.

Its objective is to make air space accessible to everyone as a research platform, providing a range of applications for them to operate with a smartphone alone. The combination of its different sensors and telematic connections transform Flone into a multimedia drone, a mobile communication unit that moves around in a new space: the public air. 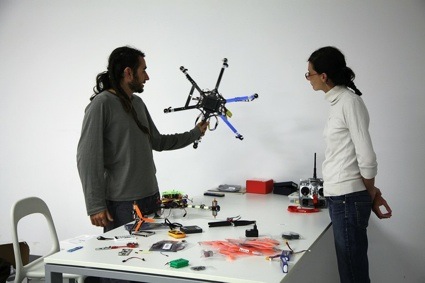 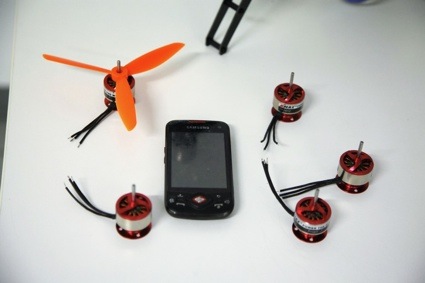 I briefly interviewed the creators of Flone:

One of the objectives of Flone “is to make air space accessible to everyone as a research platform.” So i was wondering if there’s any particular legislation about air space (at least in Spain) and if anyone is free to have all kinds of devices fly anywhere into the air to record, photograph, sense, etc.

Flying 300 meters above the ground or close to airports generally requires a permission from the Spanish Aerial Authority (AENA). However, there are no national laws regarding the use of aerial space below 300 meters. In Spain, these laws depends on local governments and currently almost none of them has any law on that regard simply because no one before had ever used space to fly drones or anything of the kind.

We spent a long time asking lawyers and drone pilots about this legal gap but nobody has the right answers. There are many variables to take into consideration: whether you’re flying over private or public land, taking images or not, for commercial purposes or not… Anyway, even if we do everything legally, we live in Españistán, a country where politicians and policemen don’t respect the law in any sense and where they can punish people without any reason.

In the United States the airspace for private drones will be regulated in 2015. In Europe a common law is coming, but until this date the air is a no man’s land.

One year ago, in the exhibition of GuerrillaDrone in the Netherlands I showed the stupid duty process for taking aerial images. 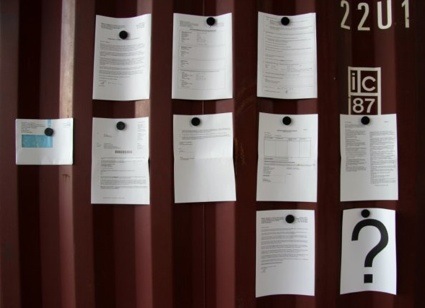 Post Cold War permissions and correspondence with the Ministerie Van Defense of The Netherlands, at the Guerrila Drone Exhibition in MOBIBOM in Groningen, 2012

Right now the law is changing, but one year ago The Netherlands had a very restrictive law dating back to the Cold War, I still have a copy of the law that explicitly says that if anybody publishes an aerial image of The Netherlands without the explicit permission of the Ministry of Defense they will be punished with some months in jail.

How far are you in the development of Flone? Do you still have much to achieve?

Flone can have a lot of capabilities and flying modes. So far we have developed the physical platform, and right now we are developing the software interface, we are focused on the pilot experience, designing a more natural way to interact with a flying machine.

We have already developed a Android app for flying flone without the traditional RadioControl equipment. 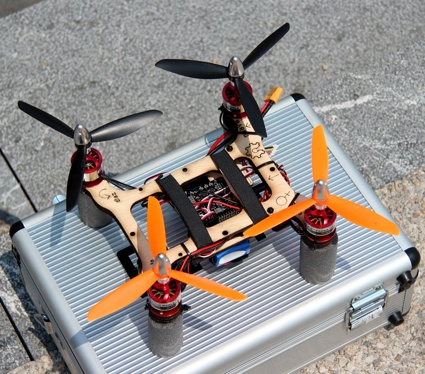 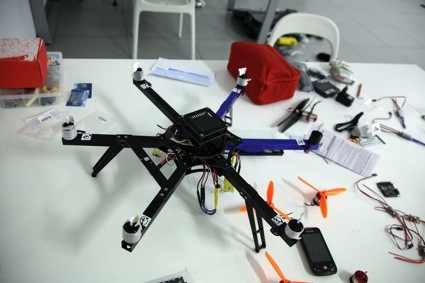 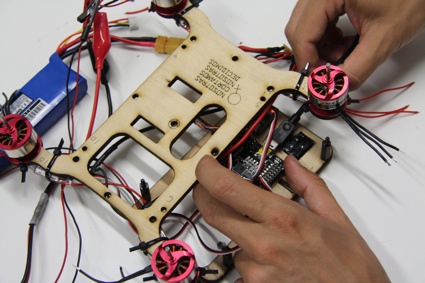 What can Flone do so far?

Transform the airspace into an accessible public air.

How are you planning to use the flying smartphones personally? And did you meet with beta testers, members of the public who suggested surprising ways to use Flone?

Each new idea of using flone (or any other drone) is a surprising one, and is also probably totally unprecedented. Anyway we prefer the idea of flone as a shared vehicle instead of a personal one. Private cars have changed the way public space is designed and used. We prefer an ecopolítical idea of a public network of flying devices.

Until now we have already built some airframes for different people, a lot of people contact us asking for information but becoming a drone pilot and becoming beta tester taks time. Next month we will do a drone hackademy in Barcelona and we plan to build 20 flones. With the stable release of the app we expect that a lot of people will get involved. 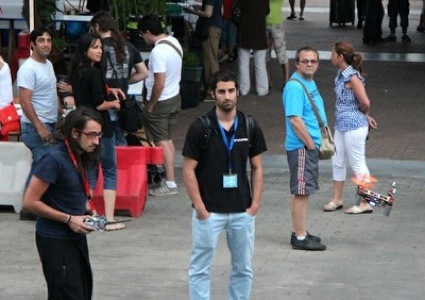 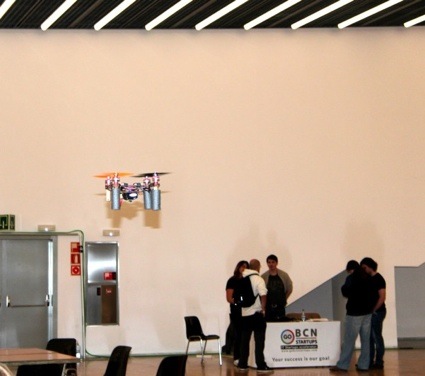 Demo of Flone at the BcnDevCon13, the third edition of the Barcelona Developers Conference,

Did you meet unexpected challenges during the development of the projects? Things that didn’t go according to plan, that were more difficult to implement than you thought or that surprised you?

Dealing with time in the milliseconds scale. Motors update their velocity 400 times each second. Debugging this kind of fast robotics requires a lot of experience. It’s not about finding the best solution, it’s about finding the equilibrium between the fastest and the best.

I have a question just for Lot who worked on Guerrilla Drone: is Flone another form of GD? Maybe one that looks less threatening and that is lighter?

Yes, but was not a direct transformation. The main element of Guerrilla Drone is their microprojector that has the same size of a smartphone. Flone is a kind of democratic version of Guerrilla Drone in the sense of making the technology accessible, but has a different concept.

A webpage with real time flyings of users around the world, smartphone-based glasses for piloting flone by First Person View, autonomous flight plans, gimbal-mirror for video stabilization, improving the failsafe SMS-ing of the position if the flone gets lost, multiple connection with 3G & Wifi, an automatic path calculation for flying swarms… and a parachute.

This are some future developments, but right now, the next for us is: Use it!

We spent the last six months of our lives developing it, so right now the main motivation is exploring the airspace for ourselves.

Thanks Lot, Cristina and Alexandre! 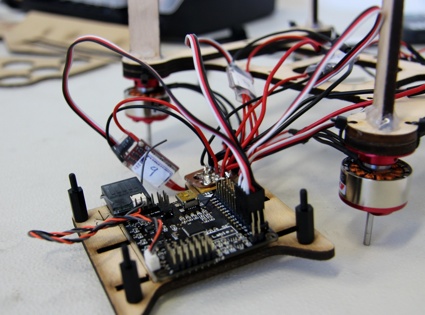 Flone was the winning project of Next Things 2013 – Next Space, the Second Global Art and Technology Challenge, the joint call for ideas by Telefónica I+D, the research, development and innovation company of the Telefónica Group, and LABoral.