Explore Everything: Place-Hacking the City by Bradley Garrett, an ethnographer from the School of Geography and the Environment at University of Oxford working within the global Urban Explorer community. 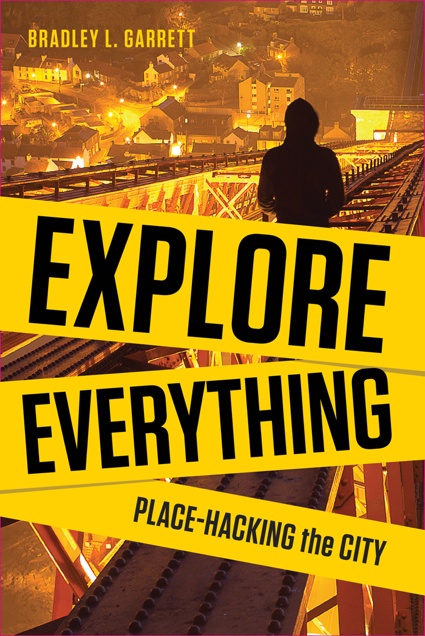 Publisher Verso writes: It is assumed that every inch of the world has been explored and charted; that there is nowhere new to go. But perhaps it is the everyday places around us–the cities we live in–that need to be rediscovered. What does it feel like to find the city’s edge, to explore its forgotten tunnels and scale unfinished skyscrapers high above the metropolis? Explore Everything reclaims the city, recasting it as a place for endless adventure.

Plotting expeditions from London, Paris, Berlin, Detroit, Chicago, Las Vegas and Los Angeles, Bradley L. Garrett has evaded urban security in order to experience the city in ways beyond the boundaries of conventional life. He calls it ‘place hacking’: the recoding of closed, secret, hidden and forgotten urban space to make them realms of opportunity.

Explore Everything is an account of the author’s escapades with the London Consolidation Crew, an urban exploration collective.

The book is also a manifesto, combining philosophy, politics and adventure, on our rights to the city and how to understand the twenty-first century metropolis. 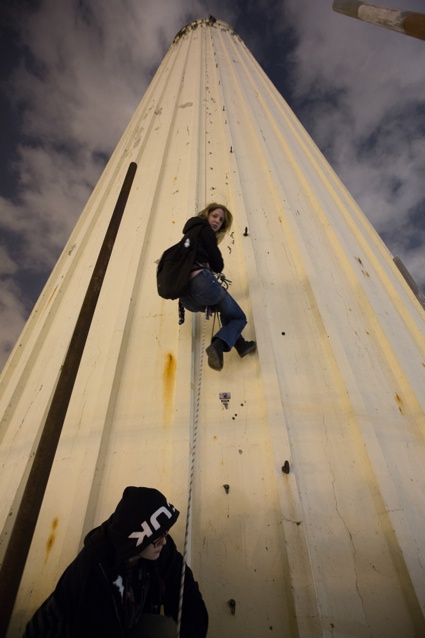 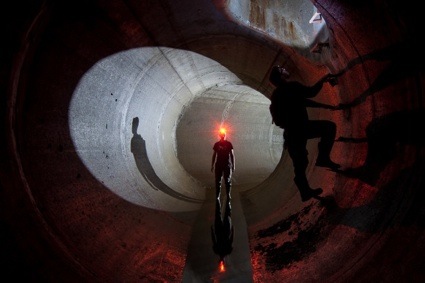 Like almost everybody else i guess, i’d like to be Bradley Garrett in my next life… Minus the troubles with the Transport for London, of course.

Bradley is a writer, photographer and researcher at the University of Oxford. He is also part of a group of urban explorers who trespass into derelict industrial buildings, sewer mazes, construction sites, deep shelters, drains, transportation networks, skyscrapers and other tall structures (mostly for the unique perspective they offer on the city below), and even in the (then) under-construction 2012 Olympic stadium. Urban explorers enter where they are not supposed to set foot, they avoid security guards and often operate at night. They never, however, willingly cause damage nor commit criminal offences. Bradley compares urban explorers to computer hackers: both groups assist in strengthening security by exposing systems’ weaknesses through benign exploration.

The reason why Bradley’s name might be familiar to some of you is that he is part of the London Consolidation Crew. The group were all over the English newspapers last year when they entered, one after the other, London’s ‘ghost’ tube stations. They had already gained access to a number of them when, 4 days before ‘the royal wedding’, they tried to get to the British Museum Tube Station, starting at Russel Square station, running across the platform, down the piccadilly line, then switching to the central line tracks. They were caught but the British Transport Police let them off with a caution but Transport for London issued an ASBO forbidding them to talk to one another for 10 years, or to carry any equipment that could be used for exploration after dark. 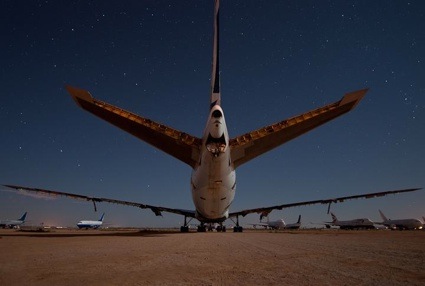 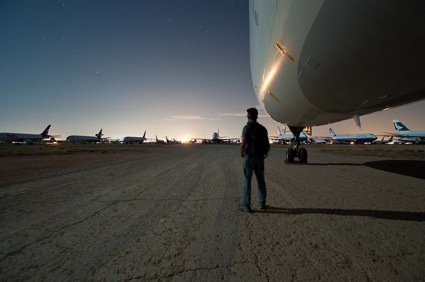 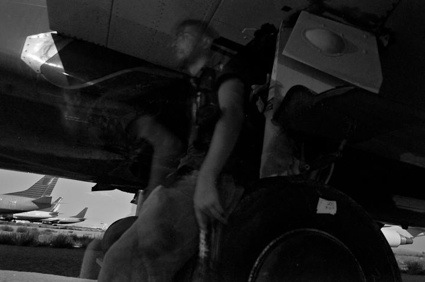 They’ve also infiltrated many other fascinating locations (some of which we will never see, no matter how much we are ready to pay.) They climbed on foot the 76 stories of the Shard when it was still under contruction. Or Burlington, Britain’s Secret Subterrean City, the place where the British government was to be rebuilt in case of a nuclear attack. They also visited several of the 33,000 derelict buildings in Detroit. The took photos from the roof of the closed down Sahara casino in Las Vegas. They climbed up the wings of the Angel in Gateshead to wrap a scarf around its neck. The played with the London Rail Mail, a miniature underground railway used by the Post Office to move mail between sorting offices. They walked around the unglamorous but rather interesting London sewerage system designed by Joseph Bazalgette in the 19th century. And they managed to move around unnoticed in the spectacular plane graveyard of the George Air Force Base (The Southern California Logistics Airport). 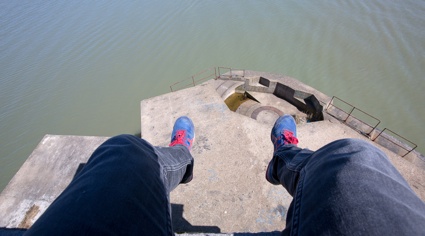 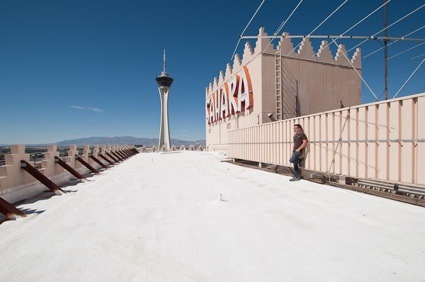 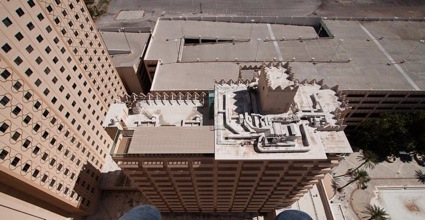 In his book, Bradley narrates the many expeditions of the LCC in London, in the rest of Europe and in the United States. It does sound dangerous (and indeed it often is) but, as he explains, UrbEx is not just about adrenaline. It is also about exploring the fractures in the city, working together as a group, gaining a deeper understanding and awareness of the city and more importantly experiencing the world in non-scripted, non-normative, non-capitalist ways.

The pages also come with the reflections and lessons that each expedition brought about: the social exclusion felt by urban explorers who become unable to connect with people living a ‘normal’ life, the direct experience of the authoritarian state, the realization that the city is built vertically as well as horizontally. 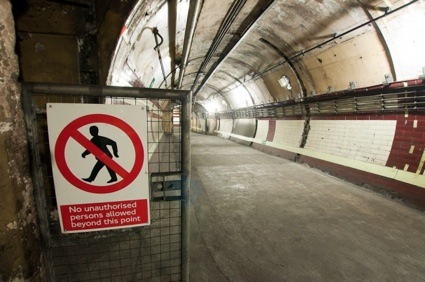 Explore Everything: Place-Hacking the City is a lively book. One moment, you’re exploring the architectural remains of the Soviet Union. Next, you are wondering along with the author whether or not it is ethical to visit drains when you know you might be disturbing the homeless who live there (as it happened in Last Vegas a city of 580,000 inhabitants that count 14,000 homeless people)?

I have severe vertigo and a reluctance to spend the night in a cold, humid bunker. But i’m grateful to Bradley for giving me an opportunity to live vicariously and comfortably through some of the episodes of his breakneck adventures. 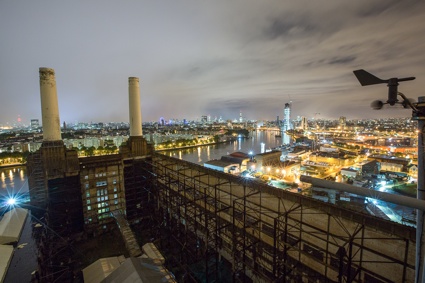 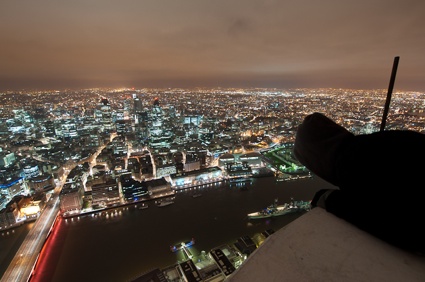 Climbing up The Shard at night 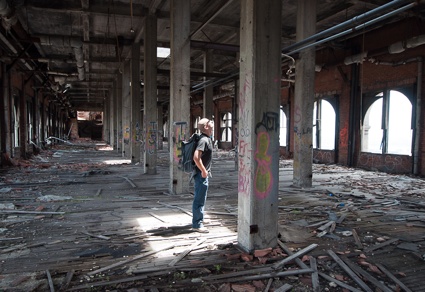 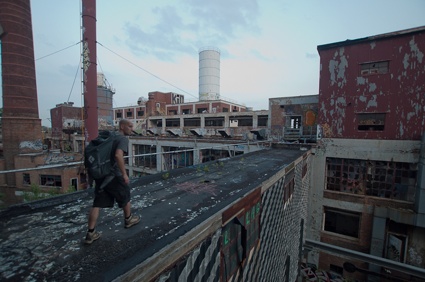 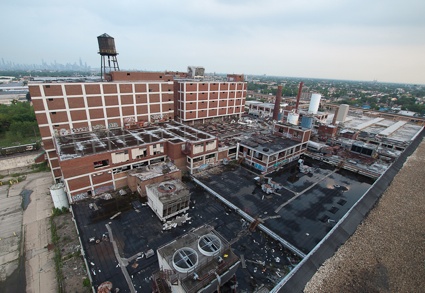 To an abandoned Brach’s candy factory in Chicago 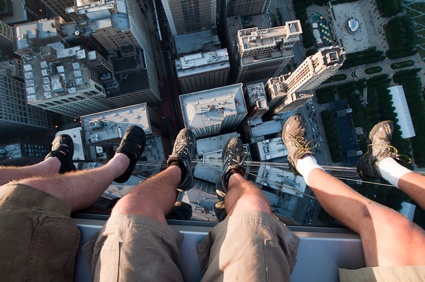 On top of the 72-story Legacy Tower 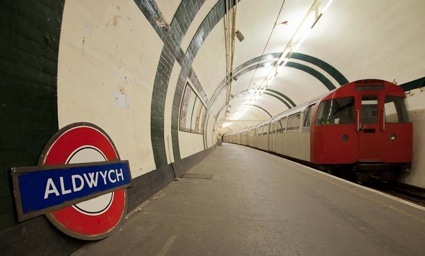 Crack The Surface – Episode I, short documentary focusing on the culture of Urban Exploring