Christie’s recently sold for $432,000 a rather amusing portrait created by AI. Last Summer, (human) participants deemed that the artworks created by a computer system were more communicative and inspiring than human-made ones. A few years ago, an artist convincingly automated the kind of texts written by art critics. I could multiply the attention-grabbing stories but i’m sure that you’ve also been following the debates around the impact that AI is having on art and on the specificity of human creativity. But does art have a voice when it comes to understanding and shaping AI? 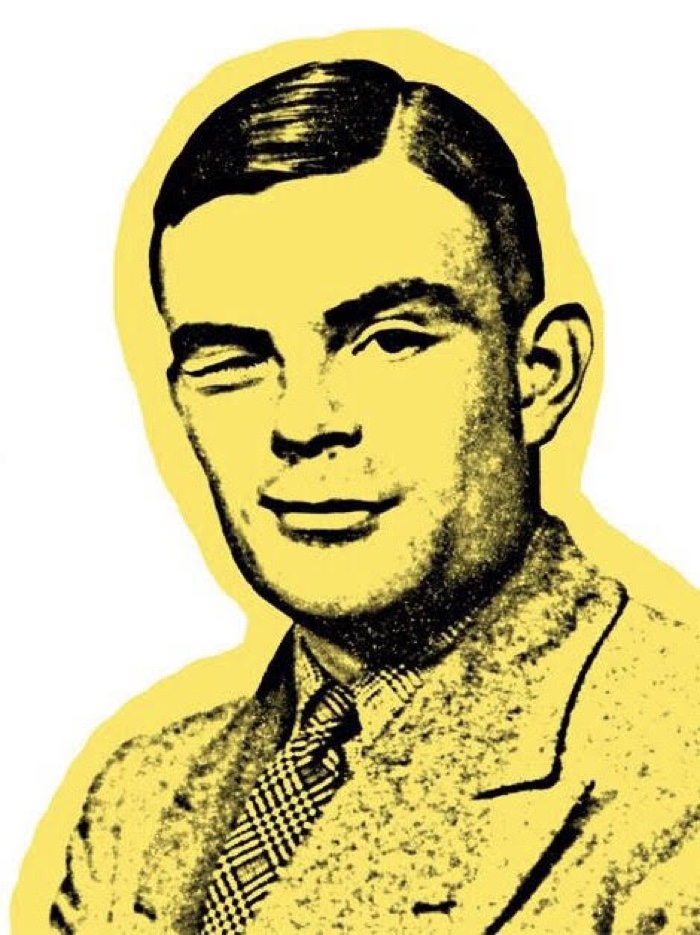 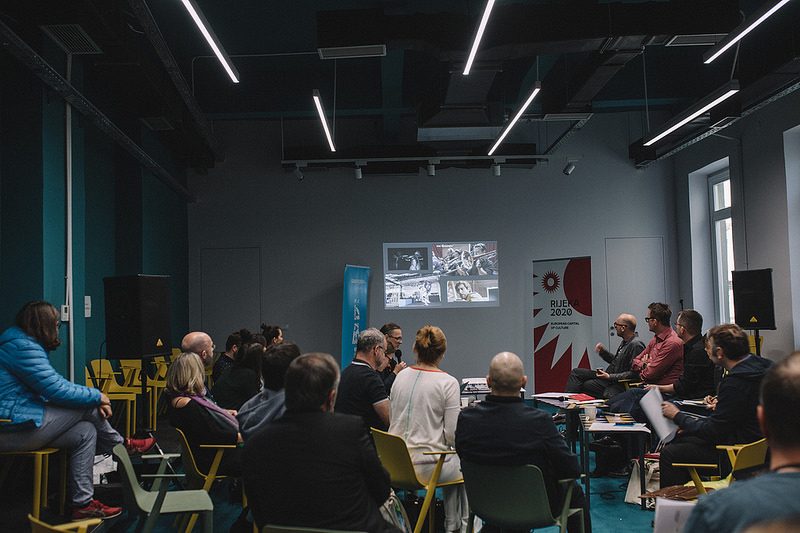 A couple of weeks ago in was in Rijeka, Croatia, to participate to E-relevance of Culture in the Age of AI, a seminar that aimed to offer food for thought to the Council of Europe’s reflection on the role that culture can have on the field of artificial intelligence. The sun was shining, i was wearing my favourite jumpsuit and the company was smart: Felix Stalder (media and cultural theorist and professor for Digital Culture and Network Theory at the Zürich University of the Arts), Vladan Joler (artist, founder the SHARE Foundation and professor at the University of Novi Sad), Gerfried Stocker (artistic director at Ars Electronica), Matteo Pasquinelli (professor in Media Philosophy at the University of the Arts and Design, Karlsruhe), etc. Everything was orchestrated by Vuk Cosic, a “cosmopolitan retired artist” and a classic of net.art.

I didn’t take many notes during the festival as i was engrossed in the debates so instead of a proper report, i’m just going to freewheel my way through a few bits and bobs i learnt over these two days in Rijeka. And i’ll focus ONLY on the art parts because you can’t really trust me with anything else.

E-relevance of Culture in the Age of AI. The cheekiness of the title isn’t obvious until you read it out loud. It sounds like the “irrelevance of culture in the age of AI.” It’s true it is often difficult to explain the invaluable role that art and culture can play in the evolution of forces that are going to shape society in ways we might not always fully comprehend. 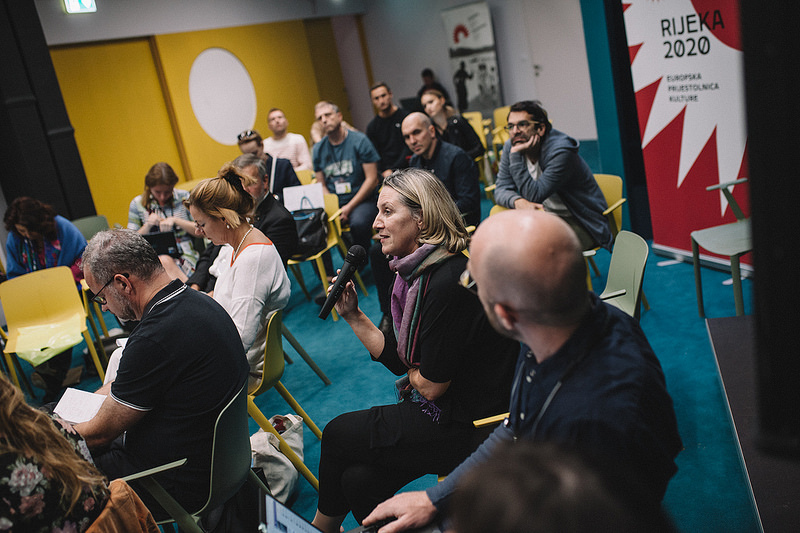 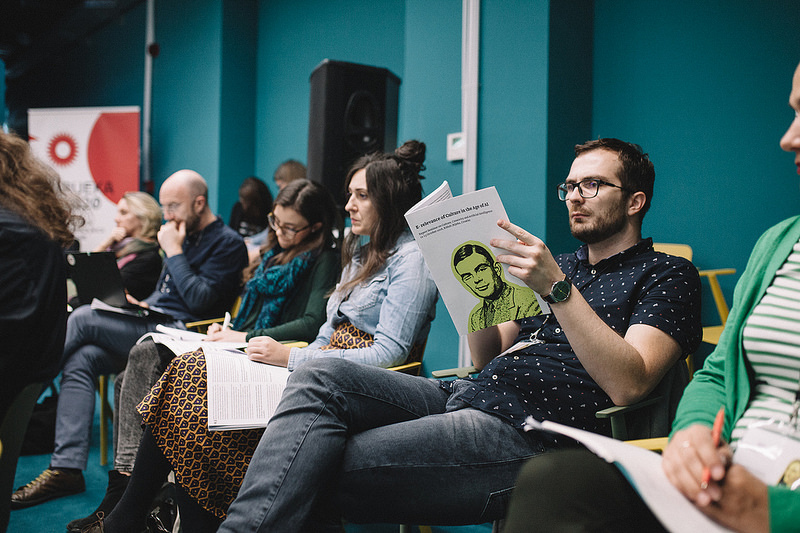 And yet, even if it is not immediately obvious, art (and culture in general) does have a role in stimulating a culture of reflection and healthy skepticism, in shaping new models and narratives, in articulating all the social dimensions of a technology like AI, on seeping into discussions and eventually into reality.

Science-fiction is a powerful example of the role art can have on the perception and even the development of a technology. Much the public’s imagination of what AI looks like and the kind of interaction we have with it is still shaped by Stanley Kubrick’s film 2001: A Space Odyssey. That film is 50 year old which tells us a lot about the role that culture can play in the debate around AI. The clean lines of Alexa and the voice of Siri, for example, probably owe a lot to the haunting image of AI that the film created.

As for the smoothness of technological ‘personal assistants’, they mask the complexity of the power relationships that are built into these machines.

Vuk Cosic made that hidden complexity of relationships more tangible when he brought to the discussion a series of anecdotes about the way folk culture is mocking AI, revealing how small accidents uncover the hold the technology has over our lives. And how we can sabotage it, albeit in very modest ways.

Starting with stories of accidental orders i had never heard of. Such as the one in which Amazon’s Alexa started ordering people dollhouses automatically upon hearing a news presenter on tv declare: “I love the little girl, saying ‘Alexa ordered me a dollhouse’.”

A few months later, Burger King perhaps thought it would be a genius idea to piggyback on the dollhouse episode and exploit it for a TV spot. “You’re watching a 15-second Burger King ad, which is unfortunately not enough time to explain all of the fresh ingredients in the Whopper sandwich. But I’ve got an idea,” the narrator said, standing behind the counter at the burger chain. “OK Google, what is the Whopper burger?”

The trick was supposed to prompt voice-activated smart speakers into describing its burgers, just like Alexa had been tricked by a voice on the television to buy dollhouse. The problem, however, is that Google gets its explanation of the Whopper from Wikipedia, an encyclopedia everyone is free to edit.

Within hours of the ad’s release, users had made humorous modifications to the Whopper Wikipedia page. Soon after, Google appeared to make changes that stopped the commercial from activating the devices.

An interesting issue worth mentioning here is that wikipedia is free and written collaboratively by volunteers. And yet, this unpaid, crowdsourced source of valuable information is plundered by multi-billion corporations to make even more money.

At that moment in the conversation, Felix Stalder asked me: “Do you know of !Mediengruppe Bitnik’s work with Alexa?” No, i didn’t. And yes, it’s a great project. We wouldn’t expect anything less from these guys. 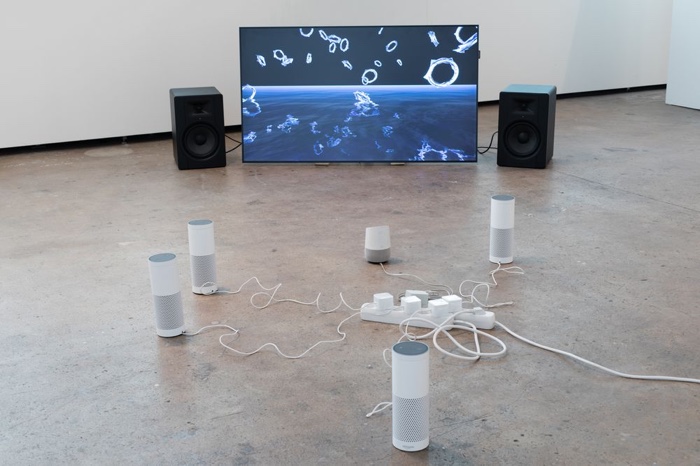 Together with musician Low Jack, !Mediengruppe Bitnik have created an EP music record titled ‘Alexiety’. The album is made to be streamed on the radio “for the enjoyment of smart homes everywhere.”

In ‘Alexiety’, a set of three songs attempts to capture the feelings we develop toward Intelligent Personal Assistants: the carefree love that embraces Alexa before data privacy and surveillance issues outweigh the benefits; the alienation and decoupling / uncoupling from the allure of remote control and instant gratification; the anxiety and discomfort around Alexa and other Intelligent Personal Assistants that is Alexiety.

The work explores the unbalanced power relationship between Intelligent Personal Assistants that are taking more and more control over our lives and us, poor flesh and bones creatures who know so little about their algorithms, rule-sets and even real machinic presence.

Speaking of music, in his statement Gerfried Stocker presented us with many fascinating artistic works that use AI. The one that really struck me might not be the most thought-provoking nor the most valuable in terms of critique of the technology though. Click and see above. 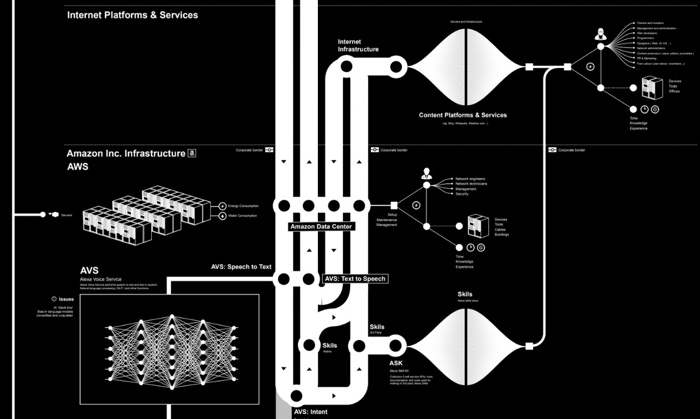 Kate Crawford and Vladan Joler, Anatomy of an AI System, 2018 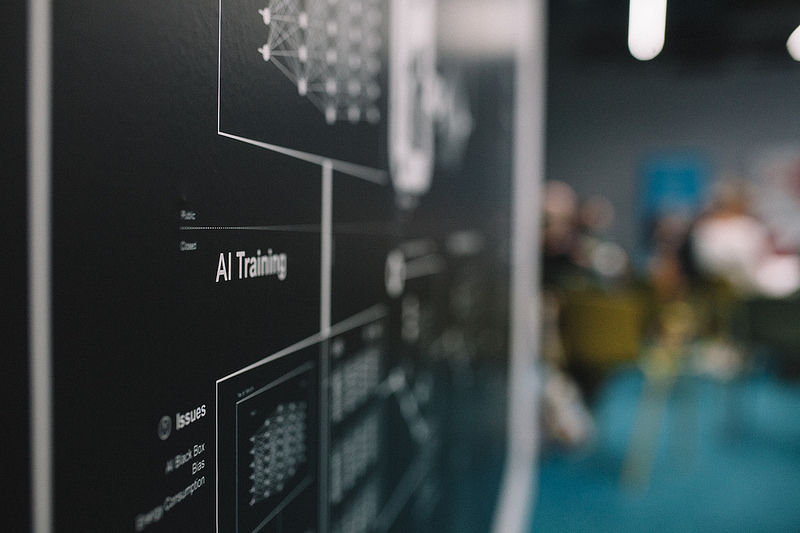 The event was also the opportunity to see Anatomy of an AI System in all its printed majesty. The map, created by Vladan Joler and Kate Crawford, elegantly dissects the whole genesis, life and death of an individual networked device based on a centralised artificial intelligence system. Printed on a gigantic sticker, the work was covering one of the walls of the seminar room. 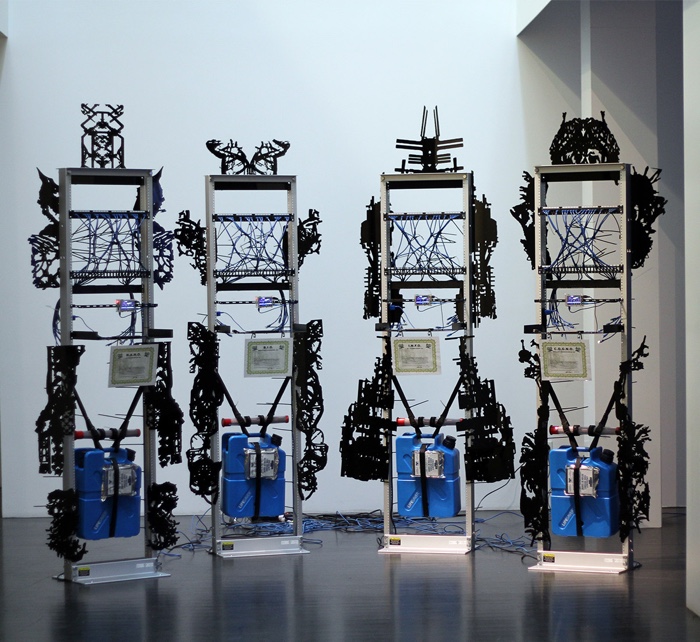 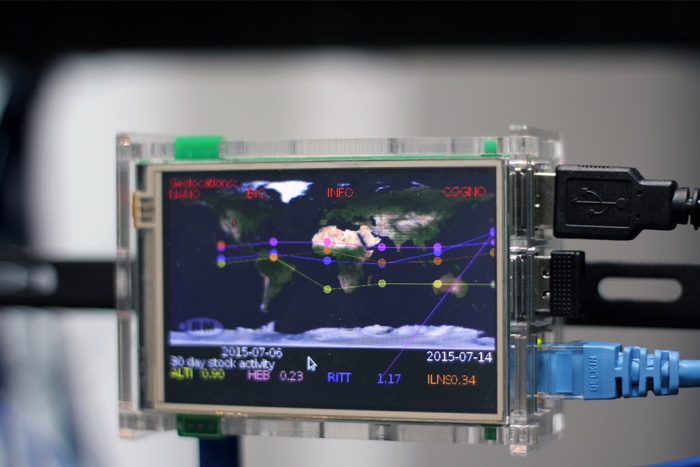 My own contribution to the discussions in Rijeka consisted in reminding the audience that technology is not made of just algorithms and big data. I briefly explained the cost that the sometimes invisible materiality of AI, its infrastructures and the devices we use, is having on the environment and on the lives of workers who often live far away from us. I’m sure you already follow this kind of discussion so i’ll spare you the details. Among the artistic projects i used to illustrate the issue, i’ll only mention Sterling Crispin’s N.A.N.O. , B.I.O. , I.N.F.O. , C.O.G.N.O. because of the way it illustrates the tension between the grand vision and promises of the Silicon Valley and the fragility of a world that is increasingly shaken by contingencies such as the depletion of natural resources (energy, minerals, etc.) and climate change. 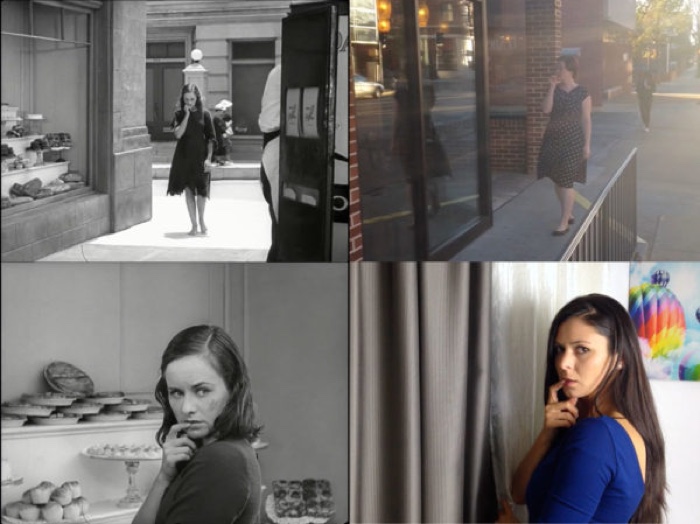 I also talked about Michael Mandiberg’s Postmodern Times. The artist commissioned freelancers on the crowdsourcing labor platform Fiverr.com to recreate small clips of Charlie Chaplin’s Modern Times. Mandiberg then assembled all the small clips made by the hidden human cogs in the powerful digital machine and recreated the famous 1936 comedy, drawing a bittersweet portrait of the digital factory and its ruthless reliance on precarity. 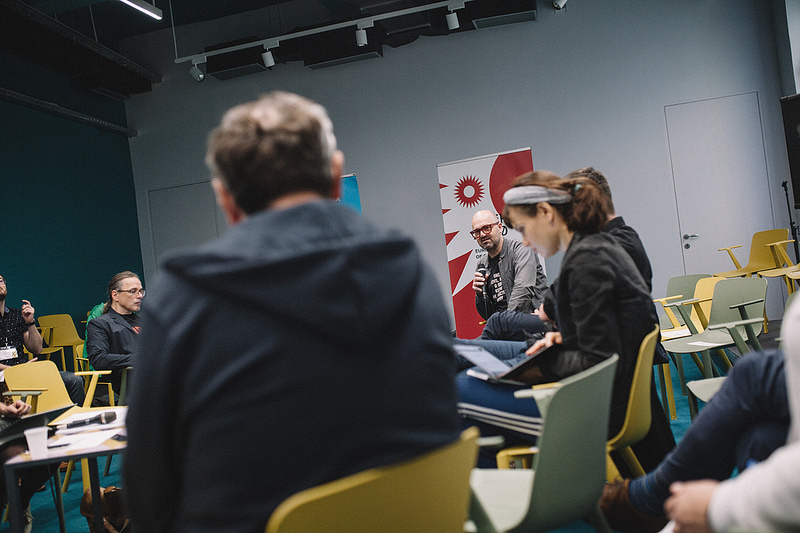 In conclusion, i’m not afraid for artists. I trust them to unfold all the expressive forms of AI technology, to use, abuse, hack, sabotage AI just like they do with any new medium. And as for us, the public, i suspect we’ll start treasuring human fallibility just like we are amused by the glitches in the machines nowadays.

With that said, i AM worried about the shrinking space that is left to art and culture today. Europe needs to create an even more nurturing environment for artists through education, commissions, residency programs and by facilitating collaboration with research centers. If Europe doesn’t make them feel valued, some of these bright and critical minds who have been educated with public money in Europe might just move to Silicon Valley (or to any of its European outposts) and dedicate their creativity to the sole glory of the GAFAM. 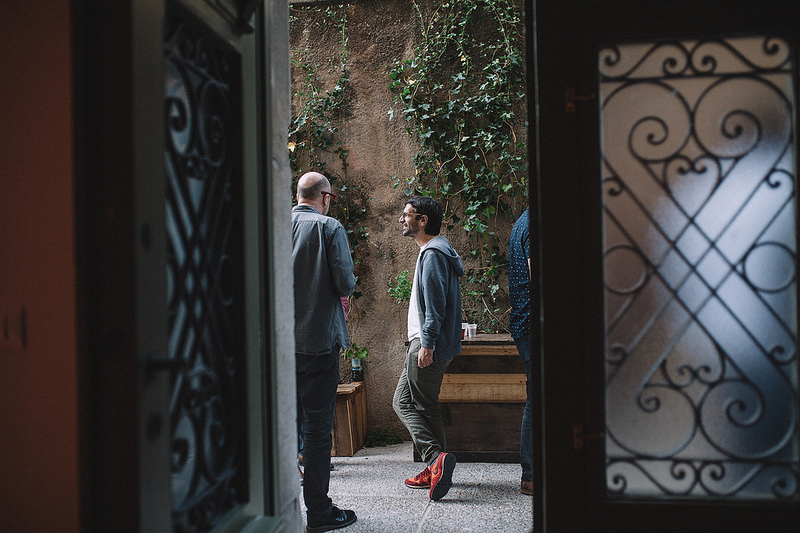 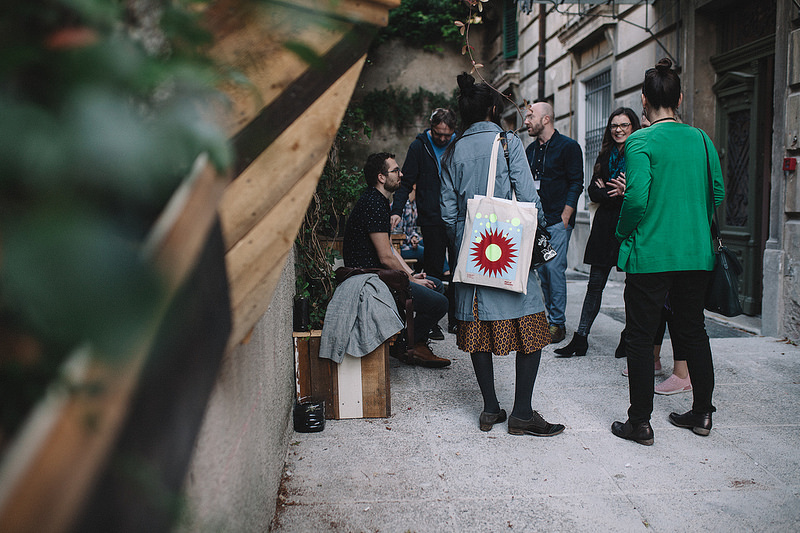 The seminar took place at RiHub in Rijeka, Croatia. RiHub in case you were wondering is a “nursery for innovative and creative work”. I find the term utterly ridiculous but the space is welcoming and amazingly well designed. 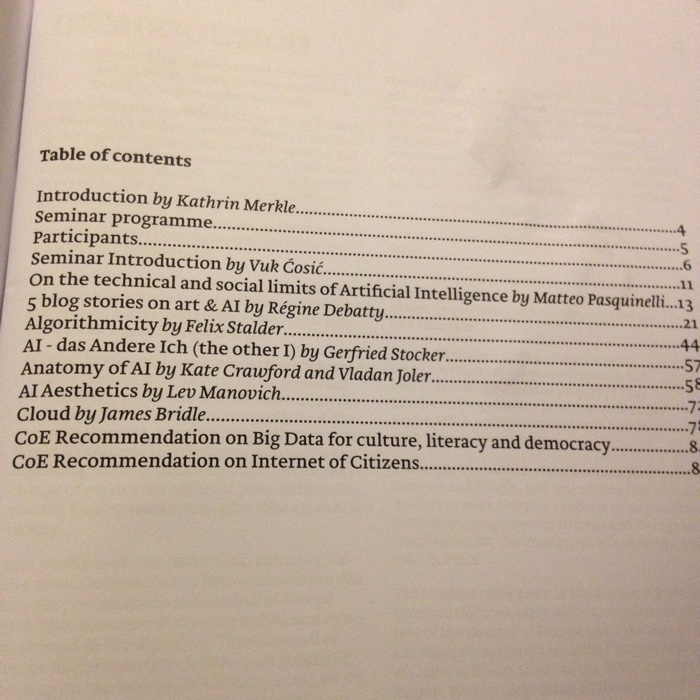 Table of content of the ‘reader’ that accompanied the event. It consisted in a compilation of essays, chapters of upcoming and recently published books by the likes of Lev Manovich, James Bridle, Felix Stalder, Matteo Pasquinelli, etc. Orchestrated by Vuk Cosic and available only on paper and in 100 prints. How cruel!