DIYsect is s documentary series ‘about the DIY Biology & Biology-Art intersection’ and it is rather good. 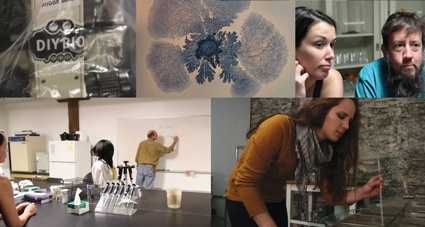 In Summer 2013, filmmaker Benjamin Welmond and artist-biologist Mary Maggic Tsang traveled across the U.S. and Canada to meet the biohackers, artists, synthetic biologists, writers and curators and talk with them about the possibilities, challenges and dilemmas brought forward by biotechnology. The result is a portrait of DIY biotech hack and biotech art by the very people who are directly involved in it.

The authors of the series write:
Our goal is to discuss the way biotechnology is changing our society: What are its political, social, and even philosophical implications? What happens when manipulating life becomes as simple as writing a line of code? And more importantly, what does this mean for average citizens and their future?

I only discovered the existence of the episodes a few days ago (thanks Adam Zaretsky!) The films are short and sharp. They are released as soon as they have been edited. For free. On vimeo. Let’s go!

The first episode of the web-series, Learning in Public is of course the introductory one. The directors interview members of the DIY biology movement as well as artists such as Steve Kurtz from the Critical Art Ensemble, Claire Pentecost, and subRosa.
The image/sound synchro is a bit wonky (at least when i watched it) but don’t let that discourage you from watching the episode.

Episode 2: Bioterror & Bioerror gets political. It starts with the FBI bioterrorism case against Steve Kurtz and then goes on to reflect the FBI’s change of tactics. Realizing its errors, the FBI is now reaching out to the DIY BIO community ‘for mutual education.’

Things are gettng tricky with episode 3. Fear of the Unknown which should be out on vimeo today!

The episode delves into the discussions surrounding synthetic biology. On the one hand, a project like the Kickstarter-funded Glowing Plant is creating controversy by bringing synthetic biology to the consumer market in the form of a plant that glows in the dark. Its developers’ rhetoric is fairly unconvincing (at least as far as i am concerned.) On the other hand, the technology watchdog group ETC. Its members fear the lack of regulation (the plant doesn’t require any form of approval in the U.S. since it is not food) and the potentially damaging impact that the release of the plant might have on the environment. Somewhere in the middle is artist Adam Zaretsky who has long used his provocative performances to try and raise a broader debate about what is ethical or not in the field of synthetic biology. There’s this great moment in the film when he explains that we don’t really know what we are doing and that we need to stop and think before we ‘fuck up our world’ beyond human control.

On a side note, i believe we need to see more of Zaretsky’s provocations and reflections here in Europe, so let’s help him fund his next trip to the old continent.