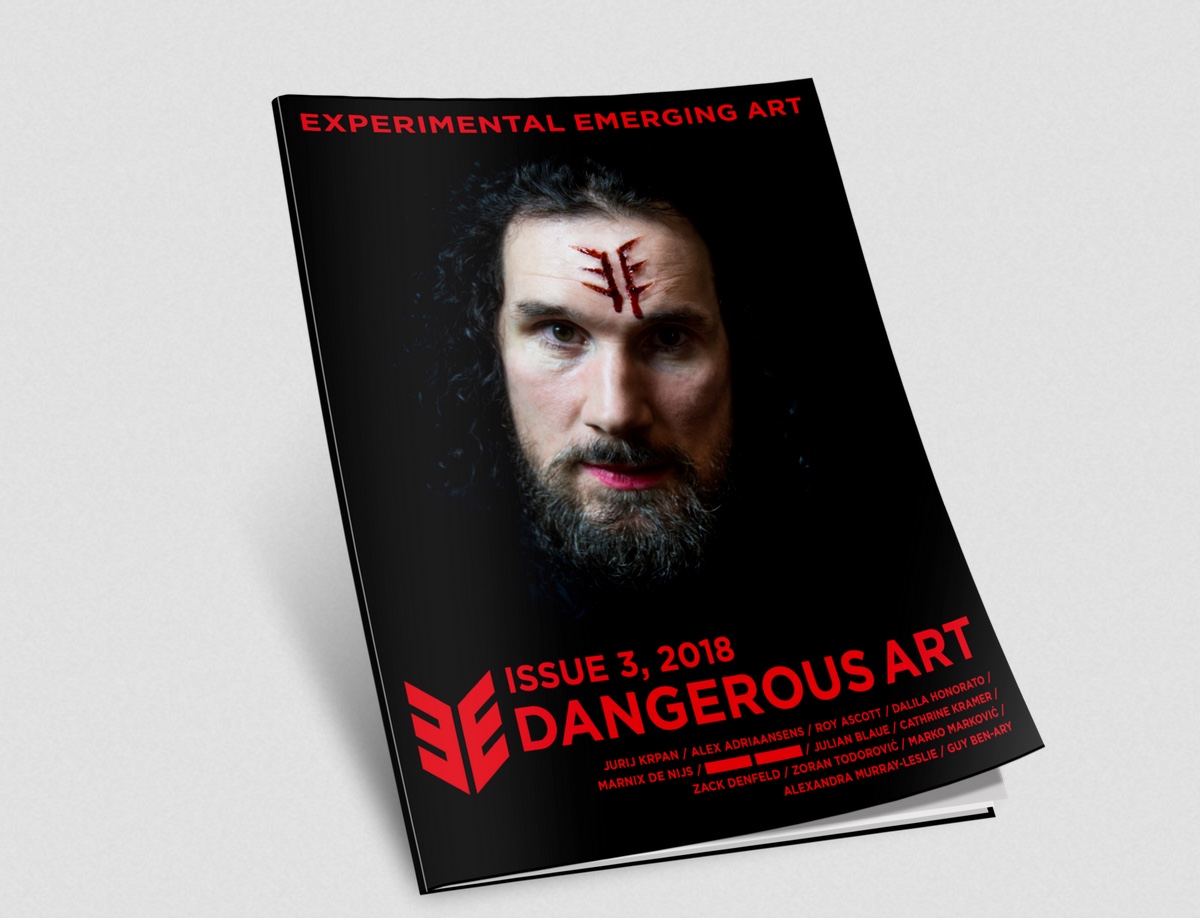 A quick reading recommendation for your weekend: EE: Experimental Emerging Art Magazine, a free and fearless publication which latest issue reflects upon dangerous art. Go this way to download EE #3.

The magazine opens on a fascinating essay that questions our understanding of dangerous art, asking whether dangerous art is art that breaks taboo, art that lands you in prison, performances that puts the artist’s or the audience’s body at risk, outrageous art works that reduce art to its most attention-seeking shock tactics or art that’s so banal, trashy or boring it almost kills art itself. Some of these forms of dangerous art are discussed in the magazines. And then some.

If art is about challenging and shaking our established notions of the world, are not all artists then dangerous? Are you a dangerous artist? In the end it might be your perceived sense of threat that decides what is dangerous or not. But one danger constantly hovers over us: in this age of the Selfie, the missing image is the most dangerous.
Welcome to our bla***end issue.

In a bold and brave statement, the editors decided to blacken the images in the magazine. I’m clearly not that daring so i’m going to present and illustrate below the work of some of the artists and curators i discovered (or rediscovered) in the interviews E.E. had with contemporary artists, thinkers and actors in art who are producing dangerous works and ideas. 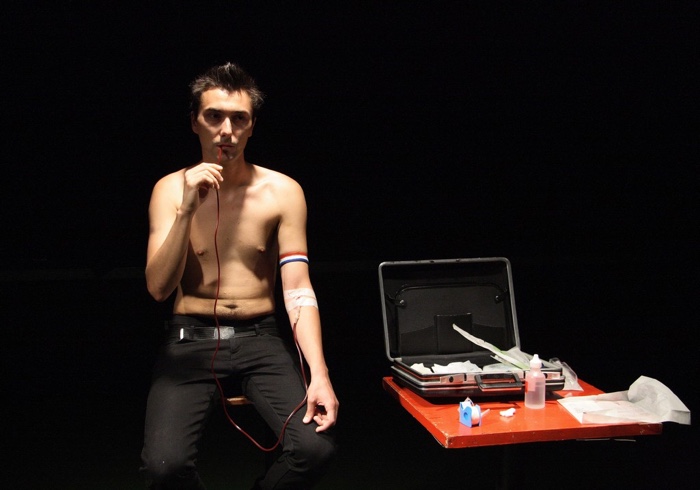 Marko Marković talks about his auto-cannibalistic performances. In Selfeater, the artist ate a larger piece of his own skin including flesh. In another version of the performance, a medical needle was stabbed in his arm allowing him to drink his own blood. 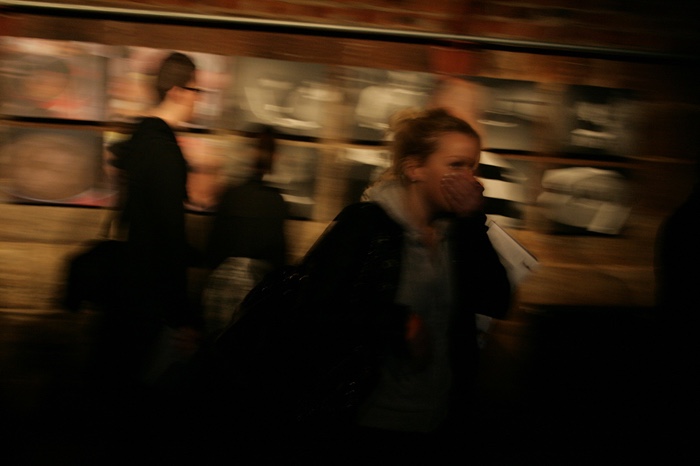 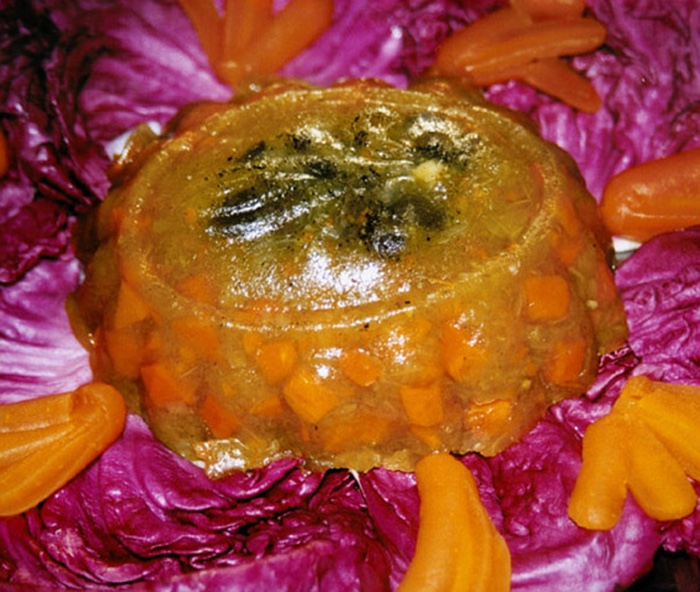 The gore is taken up a notch with Zoran Todorović who made food out of human tissue. More specifically tissue thrown away during an aesthetic surgery procedure. For the public performance, he collaborated with chefs to create meals and offered them to the audience for consumption, while a video documented the origin and the cooking process.

Asked about the audience reaction to the piece, Todorović tells E.E. magazine:

In different places, I hear different reactions. For example, here in Serbia, Croatia and especially Slovenia, many people wanted to taste it and to open some discussion around it. But in central Europe, for instance, and especially in Germany, the primary question is whether this performance is legal; the answer may surprise you – cannibalism is not forbidden, at least not in Europe. In Great Britain, the underlying problem about this work is a sanitary one. The British are concerned whether the offered food is healthy, and it is only in Britain that it is prohibited for the audience to taste this food since it was not possible to get the sanitary certificate for this food, which otherwise, in other places, was eaten for the most part during the performance. The performances usually function in such a way that during the performances themselves there’s the discussion going on between those who tasted the food and those who refused it. On one occasion the discussion which started at the exhibition in Novi Sad ended up in the parliament of Vojvodina province.

E.E. also interviewed Jurij Krpan, the director at Kapelica Gallery, aka the most exciting art space in Europe. Krpan talks about quantum biology, Maja Smrekar‘s most radical pieces and the mechanisms of funding critical and edgy art. 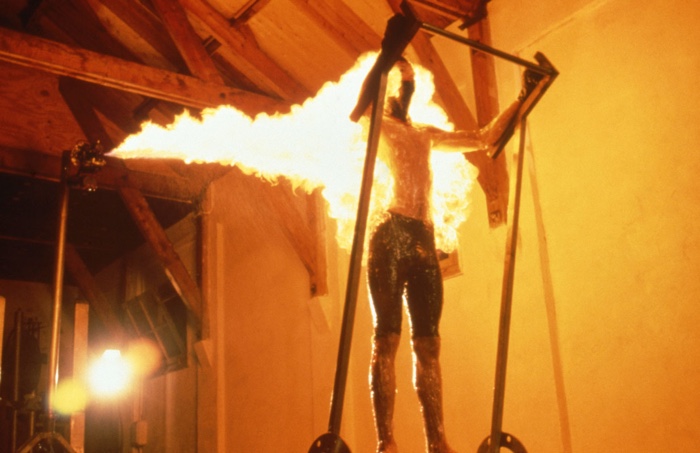 Erik Hobijn, Delusions of Self-Immolation, part of the exhibition The Body in Ruin at V2_, 1993 (photo)

Alex Adriaansens is one of the founders of V2_ and its director until the end of this month. He told E.E. that, to him, dangerous art can also take the form of speculations that explore the darkest socio-political apects of technology. He did also mention the most physically threatening work from the V2_ archive: Delusions of Self-Immolation by Erik Hobijn, a machine that sets audience members on fire for less then half a second then immediately after extinguishes the flames.

Dalila Honorato, an Assistant Professor in Media Aesthetics and Semiotics at the Ionian University in Greece and the organizer of the Taboo-Transgression-Transcendence in Art & Science conference which took place in Corfu last year explained how dangerous art can be an act of necessity to do something provocative in a moment when everything seems prohibited, forbidden. In Greece, we are not supposed to have money to do anything that is not saving the population, solving some sort of (economic) difficulty.

I’ll end this super superficial run through the magazine with an old video of what will always be one of my favourite dangerous artworks:

And with the best quote from the magazine. It’s from Cathrine Kramer and Zack Denfeld from the Center for Genomic Gastronomy talking about how some members of the public reacted to their participatory performances that prototype alternative culinary futures:

CK: Only two people have thrown up.

ZD: Yes, which is a great reaction! For one hung-over audience member, the smell was too strong, and he got sick, but another person at the Art Meat Flesh event could not overcome the anxiety when the lab-grown meat was served. I think they got quite physically ill and that is not an experience you hope for, but I think it is good to know that one possible outcome can be a sense of pure disgust.