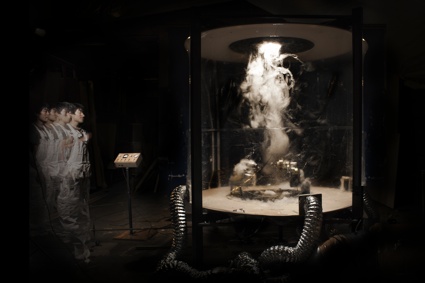 Inspired by the environmental work of Diller & Scofidio, the performative and multi-sensory work of Bompas and Parr, and the nostalgia of 1960s event architecture, Shichong Li’s project utilises sugar as a base element and ‘centrifugal random fibre extrusion’ fabrication (candyfloss) to build cloud structures.

Unsatisfied with the scale of the miniature clouds he thus produced, the artist and designer decided to build a candy floss cloud on an architectural scale, with sugar as an ideal base material for a floating semi- rigid architecture. Indeed, sugar can form structured space to be inhabited and engaged with in ways water cannot. These cloud formations create a medium between architecture and inhabitants which aims to stimulate communication and interaction.

Shichong Li’s quest to build the ultimate and most efficient candy cloud-making machine is still ongoing. He has spent the past year making prototype after prototype. Often failing but always learning and fine-tuning his creations.

I discovered the Candy Cloud Machine at the graduation show of the Interactive Architecture Studio – Research Cluster 3 at the Bartlett School of Architecture UCL. The unit, headed by Ruairi Glynn and Ollie Palmer, focuses on kinetic and interactive design looking at the latest robotics, material and responsive systems while at the same time borrowing from a long history of performative machines and performing arts.

I already mentioned one of the works developed over this one-year postgraduate course: William Bondin’s research into self autonomous creature-like structures which take their cue on slime mold and very slowly navigate public parks. The other stand-out work for me was Chong’s poetical, elusive and absurd Candy Cloud Machine. I contacted him to ask if he had time to tell us more about his candy cloud adventures. 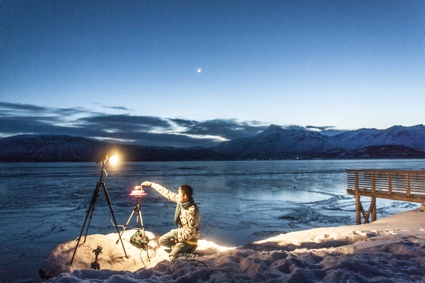 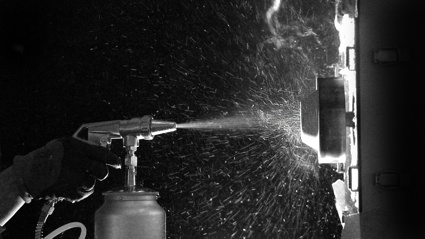 Hi Chong! What are the physical and technological challenges of creating clouds using sugar rather than water?

Whether they’re conscious of it or not, I believe Architects dream of building clouds. Not in the narrow sense of a cloud, but rather architecture which is “cloud like”, soft, , ephemeral, responsive, light etc. Water doesn’t have to be the base component and so I explored sugar for its inherent properties.

The cloud-like architecture is candy floss. There are many challenges in making clouds using candy floss. These challenges can be summed up into two parts. The first one is the process of creating the clouds, the second one is to keep them floating in the air. During the process of creating candy floss, the tricky parts are the control of the heating temperature and the proper moment of sugar feeding. The heating temperature have to be controlled and stabilized between 186℃ to 200℃ and a proper amount sugar has to be fed continually. After the candy floss has been created, and because it is heavier than the air, it has to be blow up by in the air so that it creates a cloud. That requires me to design a system to control everything at the same time, which is complex but also interesting to design. 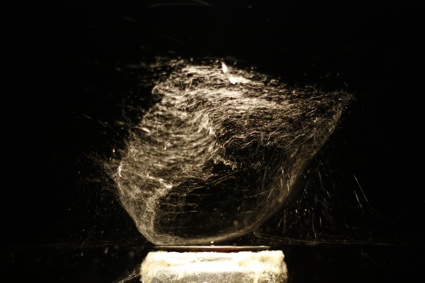 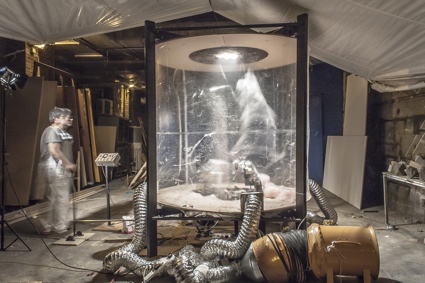 Could you describe some of the prototypes you developed in your quest to make a candy cloud machine? Why do you think the experiments failed?

Sure! The first and second prototypes were built following a study of the mechanical principles to make a candy floss maker. The heating and rotating systems have to be tested properly and they will be the base of the next step studies. These experiments were successful in a way. But as the research moves along, the air control and generating system have became the biggest challenges. 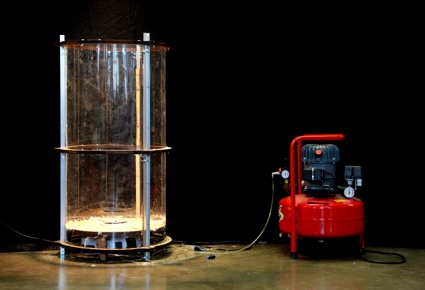 The third and fourth prototypes, for example, are wind tunnel systems, they were designed following the study of air driving system. The third one is called Laminar air flow generator (LAFG). Laminar air is a type of flow where the motion of the particles of fluid occurs in orderly straight movement. Compressed air is blown into a perforated wind box. The wind box has the shape of a circular ring surrounding the candy floss maker, which blows the candy floss up smoothly. I was thinking of using laminar air which is stable enough to hold candy floss. However, the results of the LAFG experiment show that the airflow looses a large amount of energy in the box and at the edges of holes. The outward-streaming airflow is too weak to drive the candy floss upwards.

The second air control system tested was a multi-fan system. In order to solve the problem of insufficient air flow in the LAFG, this design comprised eight powerful axial fans to blow air into the chamber directly.

Because the design used axial fans as driving forces, the airflow is no longer not laminar. A new problem was the vortex flow in the chamber. The vortex flow led to circulating air in the cylinder; air did not go straight up and candyfloss was sucked into the gap between the candyfloss maker and the fans, making all the candyfloss stick to the edge.

Despite the fact that the attempts of the Candy Cloud Machine air control system failed, these first experiences are worth studying. Firstly, the candyfloss itself is light, but the air power needed to drive it upwards cannot be low. Because the candyfloss structure doesn’t have a surface which can hold airflow, the air can permeate the gaps between the candyfloss fibres. Secondly, small-scale installations are inappropriate to test aerodynamics. According to knowledge gained in the multi-fan system test, the circulating air has a strong influence on the vortex, as the air in the chamber is highly limited. The circulating air and the vortex interact with each other and destroy the air system. These experiences and lessons are an important basis for the development of the project. 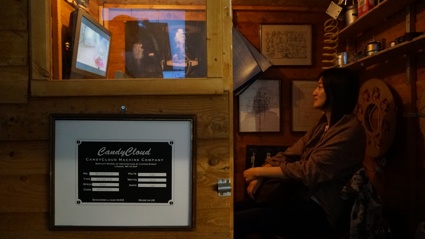 The shed in exhibition 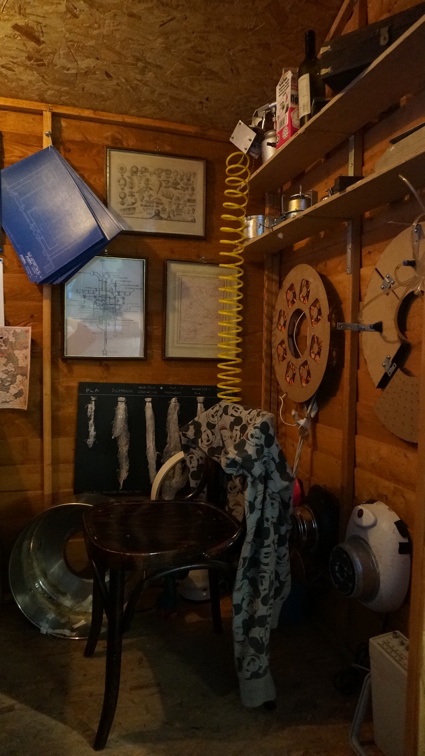 The shed in exhibition

The final project on view at the show right now is a cabin. Could you explain what the cabin is about? Why did you decide to show a wooden cabin rather than a modified candy floss machine?

The final fabrication machine- the Candy Cloud Cyclone Chamber, is too big to be exhibited so, inspired by the nostalgia of British Garden Shed Inventors, I’ve presented the project as an inhabitable portfolio. Visitors could search through the drawings, tastes and sugars, and examine the prototypes.

Now that your thesis is done and you graduated, are you planning to push the cloud machine further? To try and develop it until you reach the kind of candy cloud machine you were dreaming of?

Yes, the research of the cloud dream is still ongoing, and I am still trying to further develop the candy cloud machines. The fascination held by clouds offers designers a multitude of ways of thinking about space and designing in architectural practice. This story of clouds is a framework for future studies and design works. The role of designers and architects with an understanding of ‘cloud theory’ must be to use their knowledge to embark upon a ‘higher’ architectural approach. 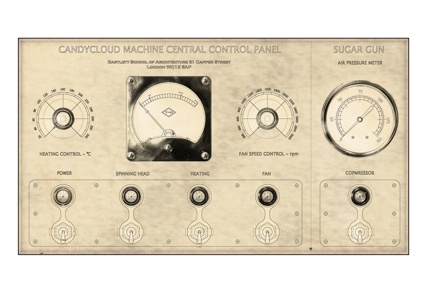 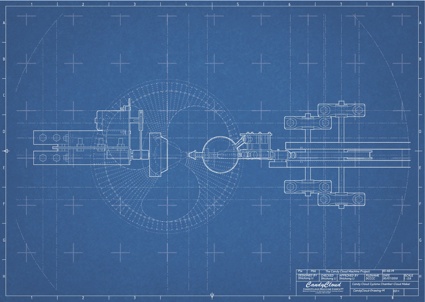 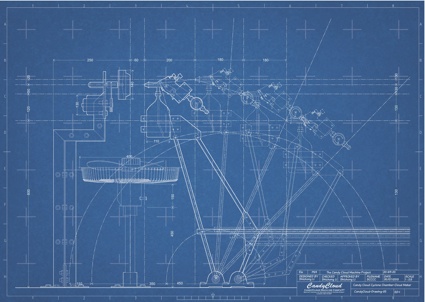