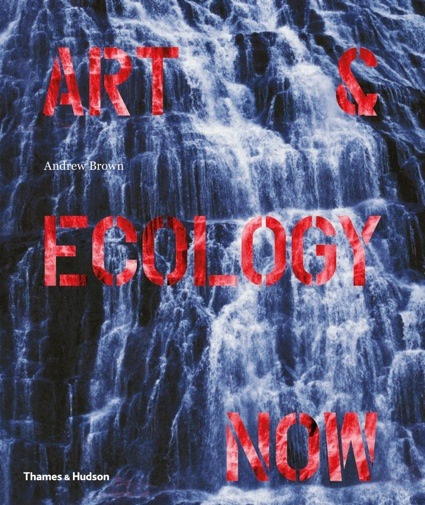 Publisher Thames & Hudson writes: ‘Eco’ awareness has had an enormous impact, not least in the art world. This accessible and thought-provoking book is the first in-depth exploration of the ways in which contemporary artists are confronting nature, the environment, climate change and ecology.

The book moves through the various levels of artists’ engagement, from those who act as independent commentators, documenting and reflecting on nature, to those who use the physical environment as the raw material for their art, and those committed activists who set out to make art that transforms both our attitudes and our habits. 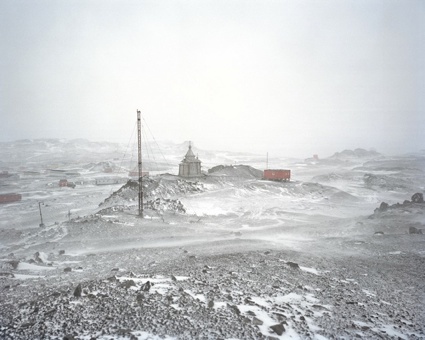 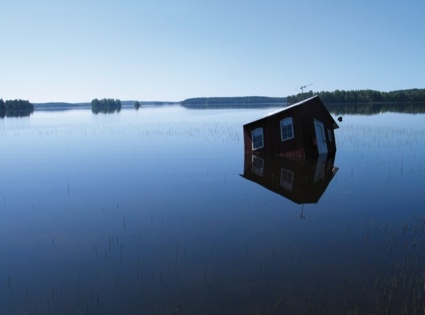 Don’t judge a book by its hideous cover and its rather bland title, Art & Ecology Now is a timely, inspiring and exciting book.

Concerned that we are today about the increased surveillance of our online existence, the financial crisis, legal and illegal immigration or the lack of bright prospects for many young graduates, we might forget to look at what lays directly below our feet and what hangs above our head. 5 or 6 years ago, ecology was a hot topic in major museums and art galleries, sustainability was the magical word and many still believed that we could go back to some Arcadian state. Or at least that the dire consequences of global warming and the over exploitation of natural resources were distant in time and place. Nowadays, we know that the world as we know and despair of right now is probably very different from the one that awaits us.

The artists in this book remind us that everything is interconnected. That immigration, business and politics are affected by change in environmental equilibrium and that any disruption taking place in Mongolia might sooner or later have ecological and thus economical repercussions at the other end of the world.

Art & Ecology Now organizes artworks in 6 chapters that deals with the level and type of personal engagement with nature:

re/view highlights the work of artists (mostly photographers) who document the ecological challenges the world is going through. The author of the book compared their work to the one of war artists and investigative journalists. And indeed what these artists offer us are worrying reports and frightening images that show nature hovering between power and vulnerability.

The re/form section introduces us to artists who use the physical environment as a raw matter from which to make art. Their works take the form of permanent interventions or very light actions that leave only ephemeral traces.

re/search looks at artists who attempt to explore and understand the inner working of the natural world. Either out of personal curiosity or because they want to offer alternative ways to consider important ecological challenges.

The re/use section present artists who are concerned with the Earth’s resources and who cast a critical look at how our throwaway culture disrupts the equilibrium of the environment.

Packed with novel ideas, prototype, experiments, beta tests and hypotheses, re/create offers a selection of artworks that emerged out of a quest to propose solutions to environmental problems.

Finally, re/act presents what might be the most ambitious projects in the book. The artists featured in the pages are actively seeking to transform the world in modest but tangible ways.

I’ve already expressed my dislike of the very underwhelming cover, I’m not sure i see the point in mentioning the year of birth of each artist under their name and i would have liked to see more pioneering works from past decades (even if i realize that this is probably not the point of a book that focuses on contemporary practice) but otherwise Art & Ecology Now is an inspiring and exciting book. I was very impressed with the selection of artworks, many of which i didn’t know and almost of which i found truly relevant and stimulating.

Here’s a quick tour of some of the works i discovered in the book: 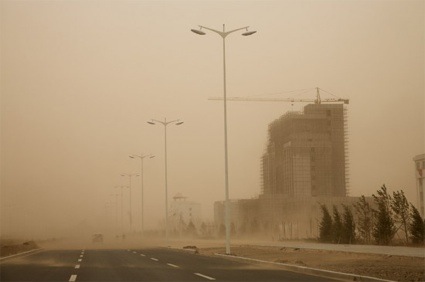 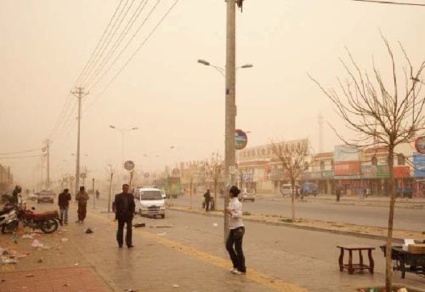 Benoît Aquin ‘s The Chinese Dust Bowl series explores the impact of disastrous agrarian policies that have turned the grasslands of central China into desert. Frequent and violent dust storms affect three hundred million people in China. And beyond since winds carry the barren topsoil to North Korea, South Korea, and Japan and as far as North America.

In China’s Qinhai Province there were once 4,077 lakes. In the last 20 years, more than 2,000 have disappeared. In Hebei Province, surrounding Beijing, 969 of the regions 1,052 lakes are now gone. And in Africa, Lake Chad, once a landmark for astronauts in space, is just about gone. 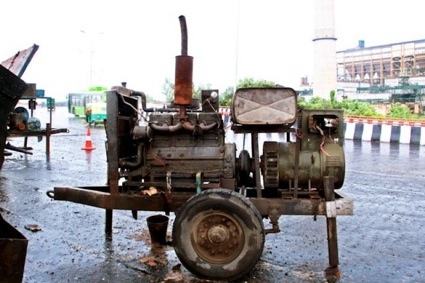 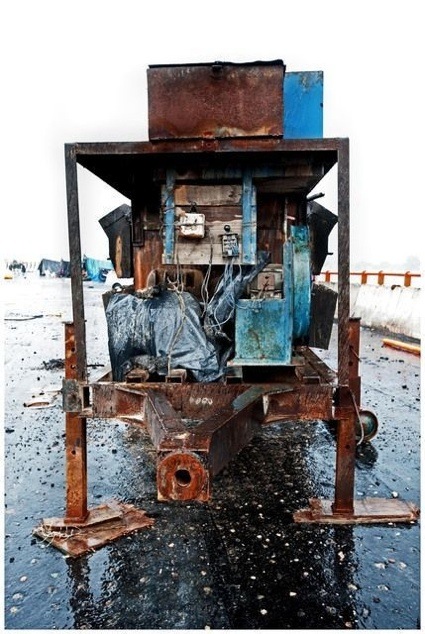 The Tar Machines photo series reflects Ravi Agarwal’s fascination with issues of labour and industrial machines. He found these iron tar-boiling machines (i had no idea such devices even existed) in the street and presents them as if they were sculptures, giving them nobility and life. 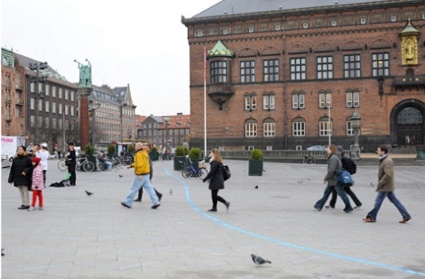 Haubitz+Zoche painted a blue line running through Copenhagen’s city center. The line delineates the city’s new waterfront if the inland ice of Greenland were to melt, prompting water levels to rise by seven meters. 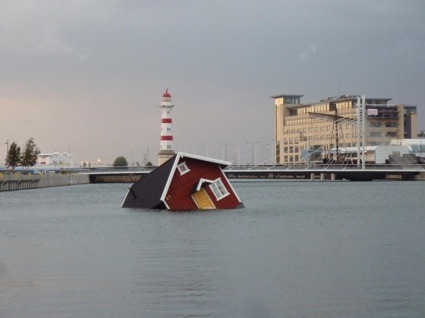 Atlantis, a collaboration between Halldor Ulfarsson and Tea Makipa, appears as a wooden cabin sinking in the middle of a lake or river. The work reminds us that our current lifestyle isn’t as secure as some of us might like to think.

To passersby, the house will looks as if it is inhabited: there’s light inside and the sound of family life can be heard from the street. 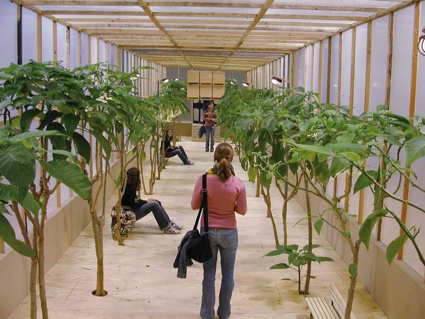 Allee der Schlaflosigkeit [Avenue of Wakefulness] was a 1:2.45 scale model for a botanical pavilion accessible to visitors. The structure was a long corridor lined with Angel Trumpet trees, a hallucinogenic plant with ties to shamanistic rites and valued for its ability to induce powerfully vivid dreams. Three beehives were added at the end of the ‘avenue’. During the exhibition, bees collected nectar from the trees and produced pure Angel Trumpet honey. 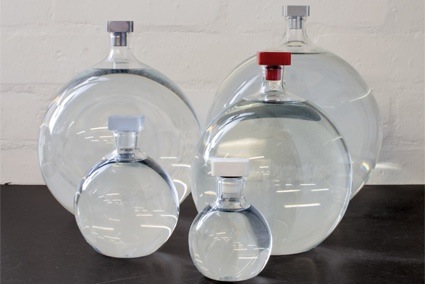 We usually associate water consumption with the water that we drink, use for washing, use in the toilet or watering plants. On average this amounts to about 150L of water per person per day in the UK. Yet, if we consider the ‘virtual’ or embodied water used to produce the goods and food we consume, our daily average is much closer to 3,400 litres of water per person per day. This ‘hidden’ water accounts for nearly 96% of our daily consumption! Hidden explores the virtual water present in manufactured goods and industrial materials. It includes a set of glass vessels designed to communicate the differing amounts of water required to produce a range of industrial materials. The stopper in each bottle is manufactured from a different material: steel, aluminium, epoxy, glass and ceramic. The vessels are sized to contain the amount of water used to produce that bottle’s cap. 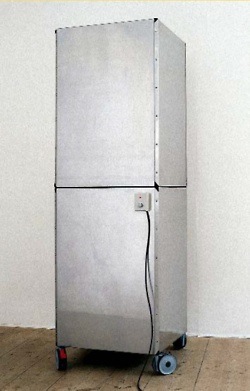 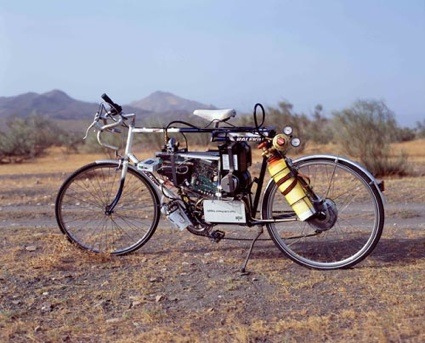 The Tabernas Desert in Andalucia is the only ‘true desert’ in Europe. Growing in size each year due to climate change and poor land management, the land is home to both the film studios of the Spaghetti Westerns era and the Plataforma Solar de Almería, a research facility developing the use of solar energy for the desalination of sea water.

On the 9th September 2004, Starling travelled 41 miles across the Tabernas Desert on an electric bicycle. The bicycle was driven by a 900 watt electric motor that was in turn powered by electricity produced in a portable fuel cell fitted into its frame, generating power using only compressed bottled hydrogen and oxygen from the desert air. The only waste product from the moped’s desert crossing was pure water of which 600ml was captured in a water bottle mounted below the fuel cell. Starling has used the captured water to produce a ‘botanical’ painting of an Opuntia cactus. The painting of this most ‘ergonomic’ of plants refers back to the site of the journey and to film-maker Leone (who introduced cacti into the area as part of the film sets), while also parodying the somewhat clumsy prototype moped. Sealed in a perspex vitrine, the project has become a kind of closed, symbiotic system, referring in part to Hans Haacke’s Condensation Cube. The work makes a direct reference to Chris Burden’s 1977 Death Valley Run, a desert crossing made in the real wild west on a bike powered with a tiny petrol engine. (via) 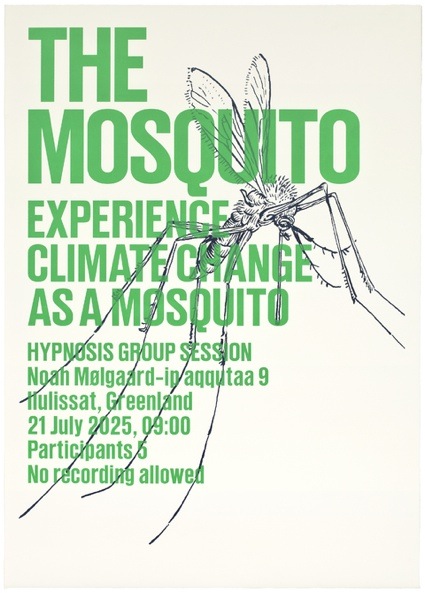 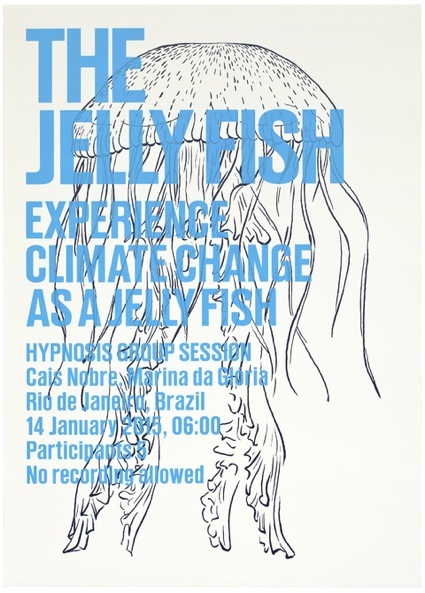 During the UN Global Climate Summit in Copenhagen 2009, SUPERFLEX offered a hypnotic group session in which the participants were hypnotized in order to perceive the climate change as cockroach. Further sessions were then scheduled to take place in other locations, this time with other animals that are either extinct, about to become extinct, are spreading rapidly or carry dangerous diseases. 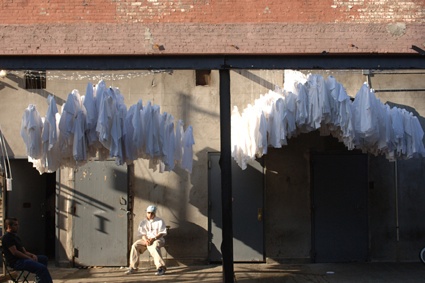 The Canary Project, Increase Your Albedo!

The Canary Project, founded by Susannah Sayler and Edward Morris in 2006, uses photography and other media to highlight evidence of global climate change and the devastation that has already occurred.

One of their ongoing projects, Increase Your Albedo!, invites people to wear white to help cool the planet. Albedo, or reflection coefficient, is the measurement of the Earth’s ability to reflect the radiation of the sun. The more reflective the Earth, the less sun is absorbed and the cooler it stays. Ice and snow are white. When they melt, the earth gets less reflective, warmer. More ice melts, and it gets even warmer. We want you to increase the overall reflectivity of the earth by wearing white. Albedo is the measurement of the earth’s reflectivity.

The introduction to the book contained a number of pioneering works from the 1960s and 70s. 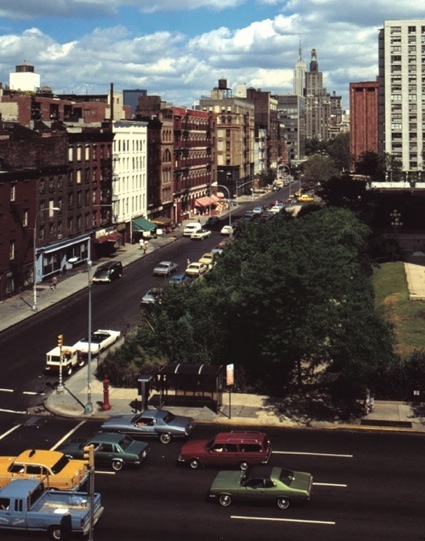 From 1965 to 1978, Alan Sonfist planted a garden in Manhattan. The artwork consisted of plants that were native to the New York City area in pre-colonial times. Conceived in 1965 the Time Landscape was among the first prominent art works in the Land Art movement and is still an inspiration to create Natural urban landscapes. 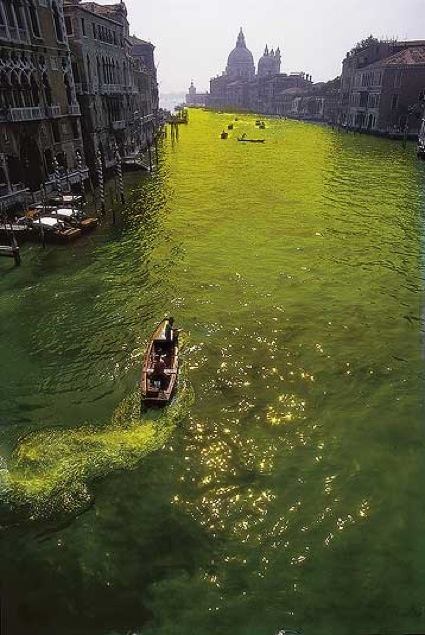 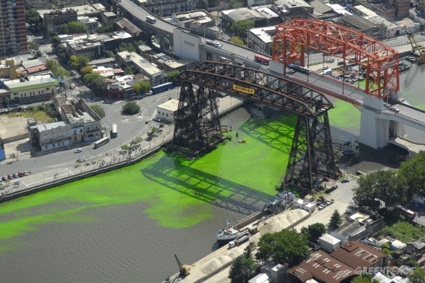 In 1968, Nicolás Garcia Uriburu dyed the Grand Canal in Venice bright green to protest its pollution. He was arrested by the police, but was released when he demonstrated that the substance he had used was not toxic. Uriburu then proceeded to tour the world in search of polluted waterways to colour: the East River in New York, the Seine in Paris, the Riachuelo in Buenos Aires. Joseph Beuys joined him in coloring the Rhine. In London, he was fined £25 for “offending the British Empire” when he colored the fountains of Trafalgar Square. The work has as much relevance and strength as ever. 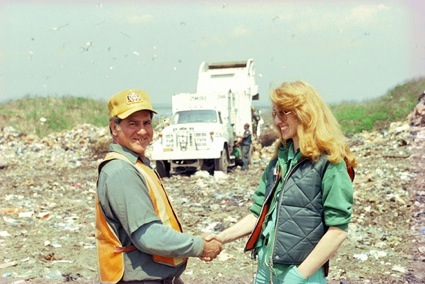 Touch Sanitation is probably my favourite work in the book.

For the 11 month-long performance Touch Sanitation, Ukeles traveled sections of New York City to meet over 8500 sanitation employees and shake their hands. Ukeles documented the conversations she had with the workers, their private stories, concerns, and public humiliations. 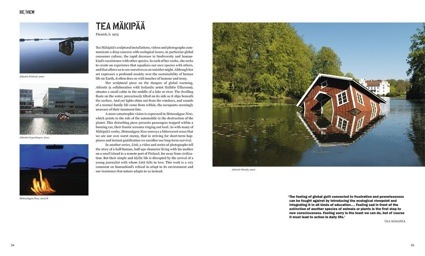 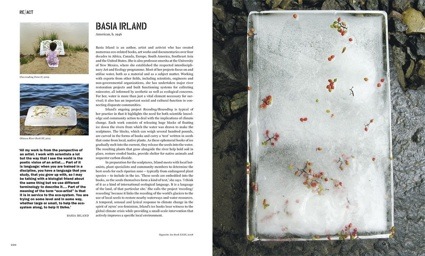 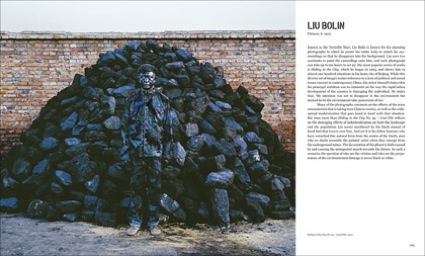 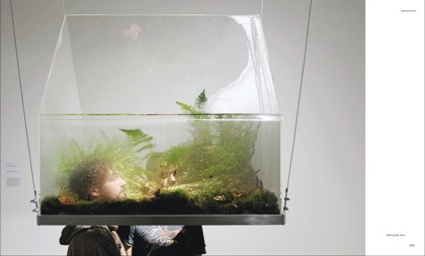