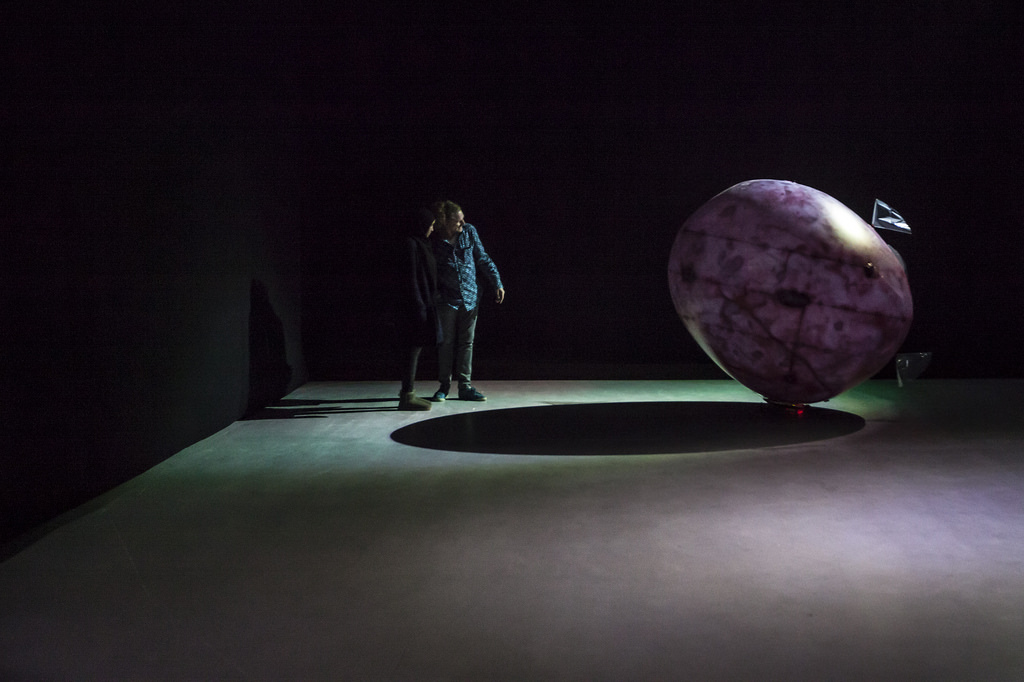 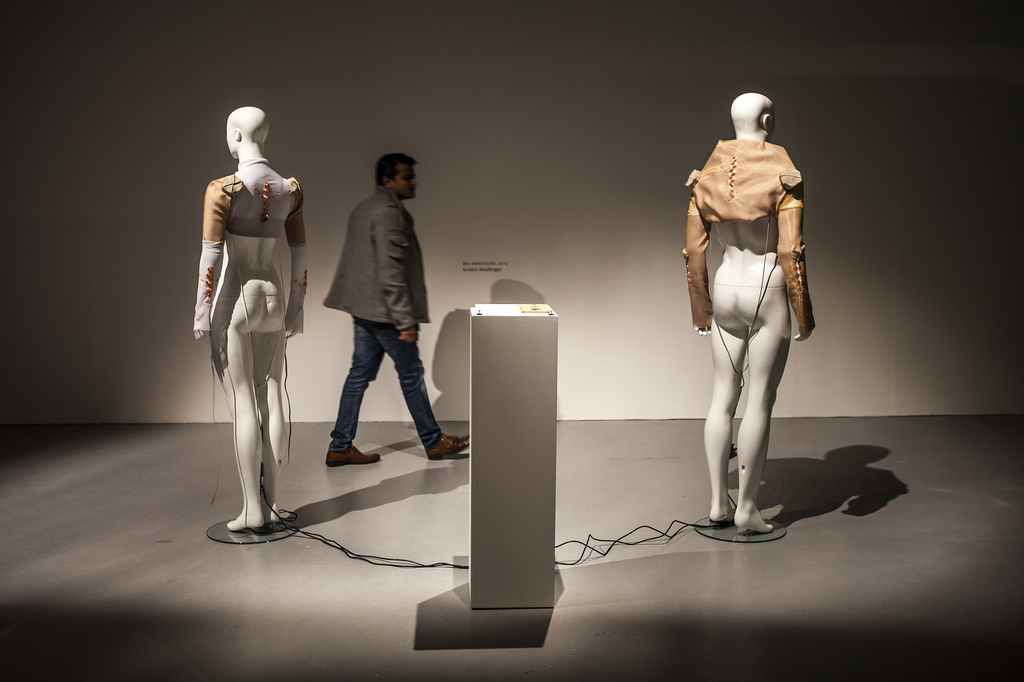 At the end of January, the MU art space in Eindhoven dedicated 2 days to bio art and bio design. The Body of Matter / BAD Award Special weekend invited the public to take part in talk, panels, workshops and performances and explore how the techniques and challenges of life sciences are embraced by contemporary artists and designers. The event followed the theme of the ongoing exhibition Body of Matter which explores (until tonight!) how biotechnology can modify the body and the perception we have of it. What will the ‘normal’ body look like in 5, 10, 20 years time? How will our identity and sense of self change with body modification? Should we impose limits to the way science is going to shape bodies, both on the inside and from the outside? Will science expand our understanding of ‘alive’ and ‘dead’? What role can aesthetics play in discussions about body enhancement?

The weekend was also an opportunity to reflect on the outcome of the Bio Art & Design award which, each year, offers artists and designers a total of 75 000 euros and the opportunity to collaborate with researchers and develop ambitious works that engage with life sciences.

My plan was to wrap up the whole event in one big post but the weekend was so dense in new ideas, food for thought and speculations that i had to write separate stories. First there was Maarten Vanden Eynde’s lecture which was so stimulating and smart that i decided to dedicate a full post to it. And now i’m going to split the rest of the weekend into two stories. Today, i’ll be sharing my notes from Friday. Tomorrow, i’ll post the ones i took on Saturday. 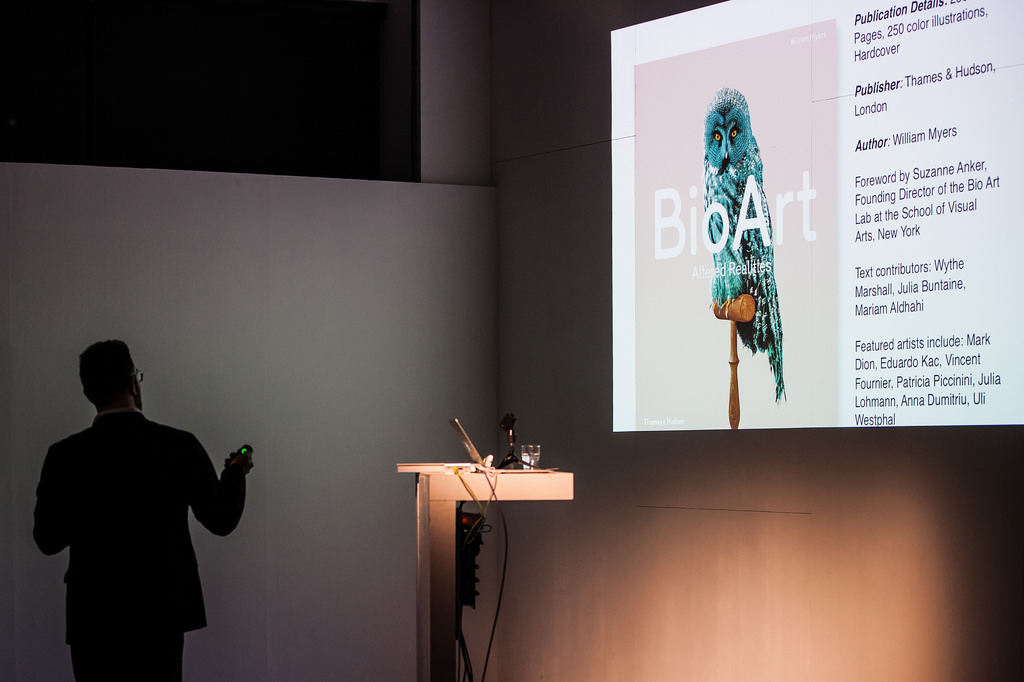 The first speaker who took the floor was the co-curator of the Body of Matter exhibition. William Myers is a teacher, a curator and an author. In 2014, he published ​Biodesign: Nature + Science + Creativity and a few months ago, he looked at the more artistic side of creative works that explore life sciences in his book Bio Art: Altered Realities (i reviewed it last year.) In this publication, Myers argues that bioart doesn’t just encompass the art that engages hands-on with living materials but it can also define works by artists who use more traditional media to respond to shifting definitions of identity, nature and life brought about by the latest advances in life sciences. To him, bioart includes thus art that uses biology as a medium and art that uses biology as a subject. A good example of this broadening of the definition of bioart is Vincent Fournier‘s ongoing series Post-Natural History. At first sight, the photos look like typical animal portraits. Until you realize that there is something off… The species are ‘newcomers’, they have been modified using synthetic biology either to enable them to conform to man’s own needs and desires, or to help them adjust to the biological changes our planet is going through: extreme temperatures, rising pollution levels, etc. 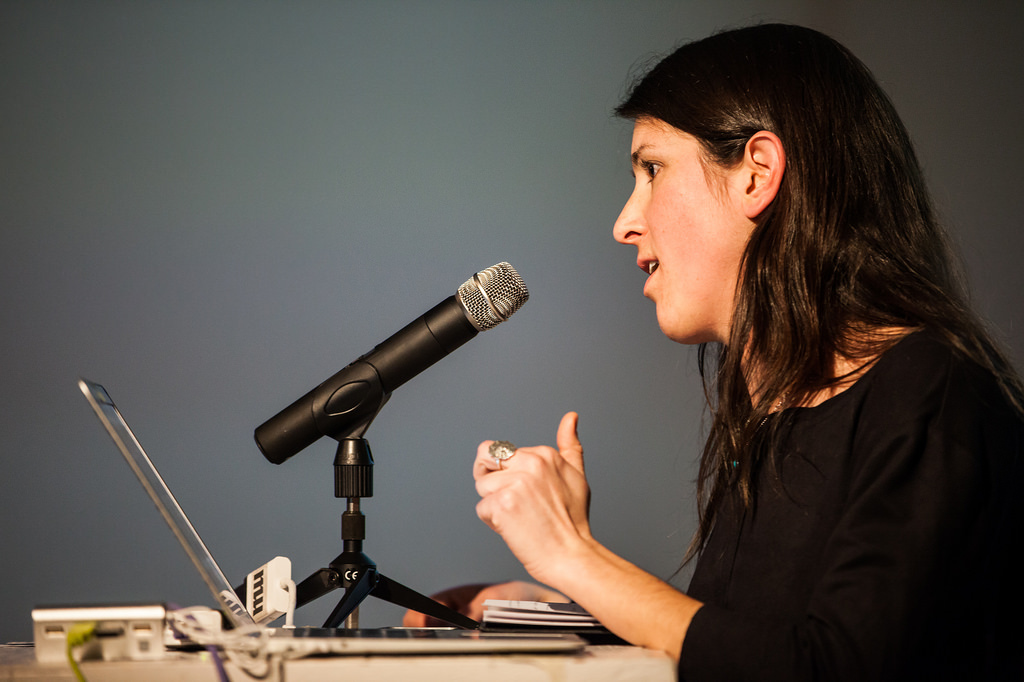 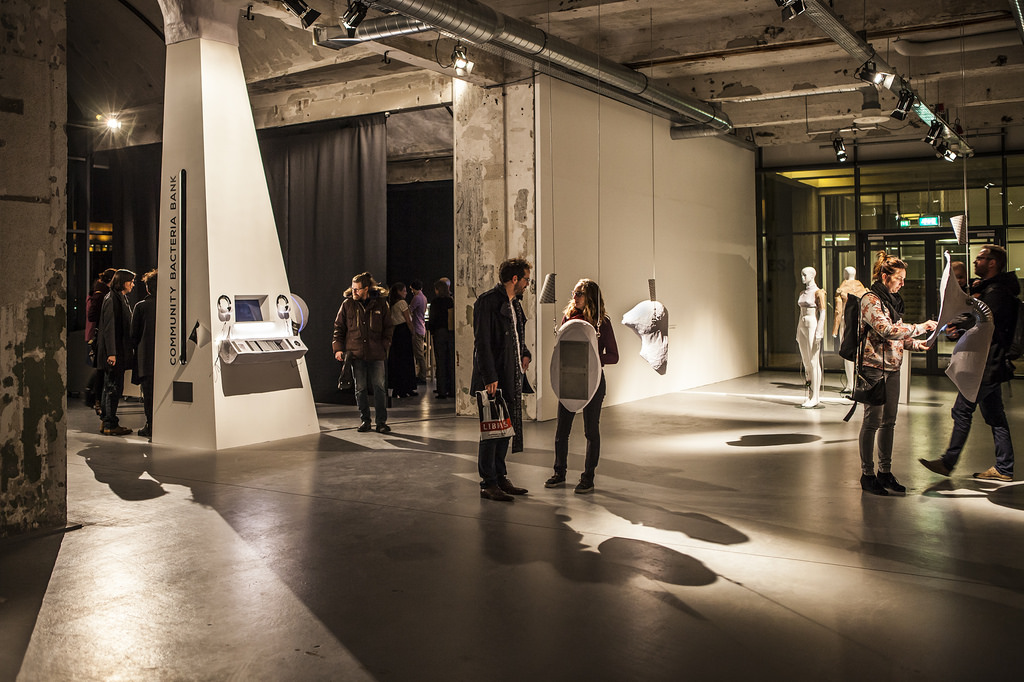 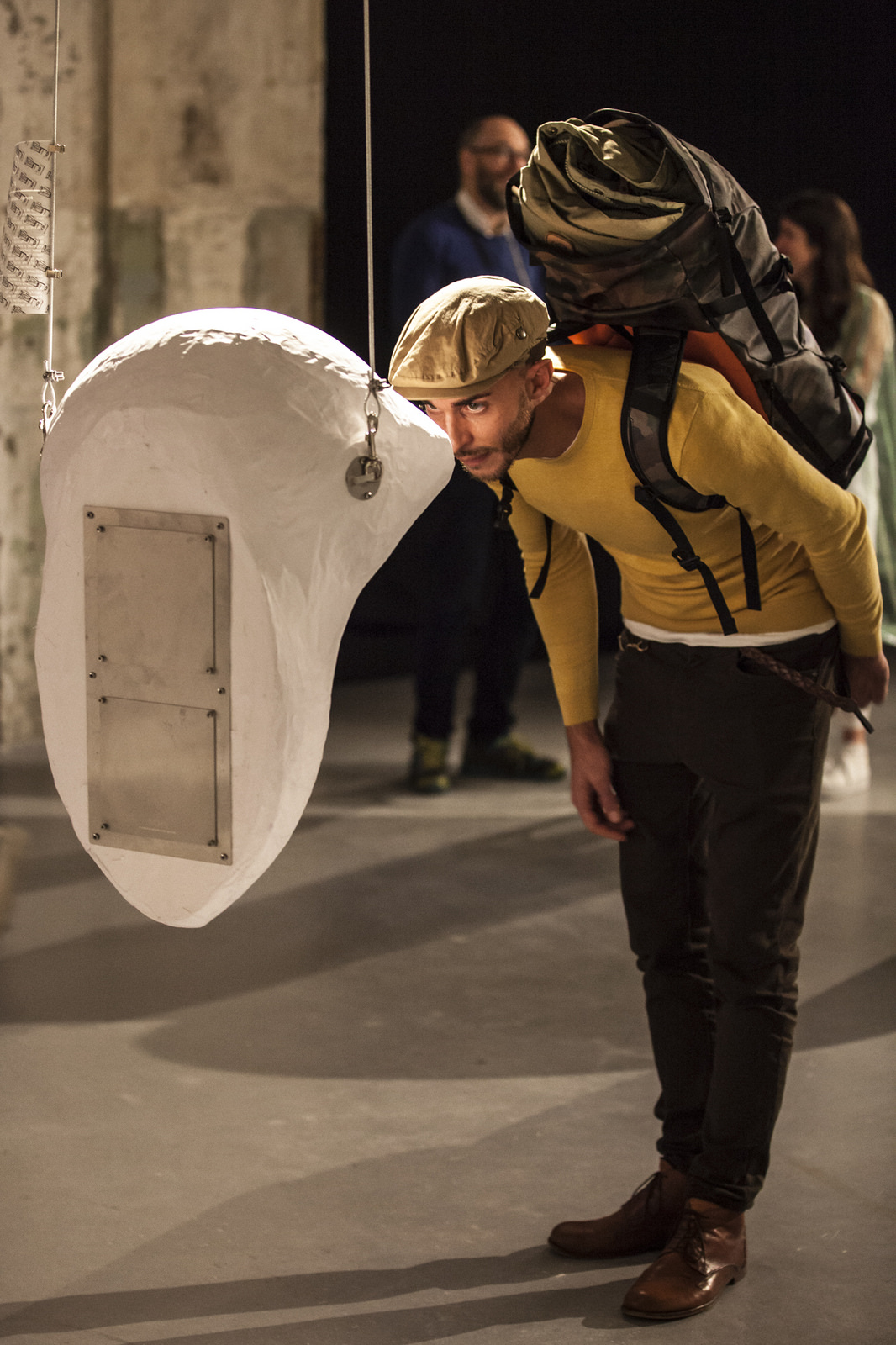 I interviewed Emma Dorothy Conley a couple of months ago when her project MSA: The Microbiome Security Agency was announced as one of the winners of the BAD Award competition. Her presentation in Eindhoven refreshed my memory about all things MSA and microbiome. The human microbiome is the collection of microbes that colonize the human body and they do so in such quantity that they outnumber our own cells ten to one. They live inside our body and on our skin and because these bacteria can vary considerably based on our age, diet, habits, geographic location and overall health, scientists believe that they can be used as a unique identifier, much like fingerprints.

Because we shed bacterial cells wherever we go, we might soon see emerge the use of microbiome sequencing in criminal investigations or for commercial or surveillance purposes. Emma’s project explores how we can protect our bioprivacy from these intrusions. The most promising of the strategies she investigated seems to be an obscuration solution that we could spray on our body. The blend mixes all kinds of revolting ingredients such as fermented food and zoo poo to create additional noise and hide the bacterial information that your body carries.

Conley imagined that you could donate a sample of poo or other bacteria-rich bits to an MSA bank. The sample would be added to a pool of bacteria that would be used to make a solution that people would apply on their skin to make their bionome anonymous. 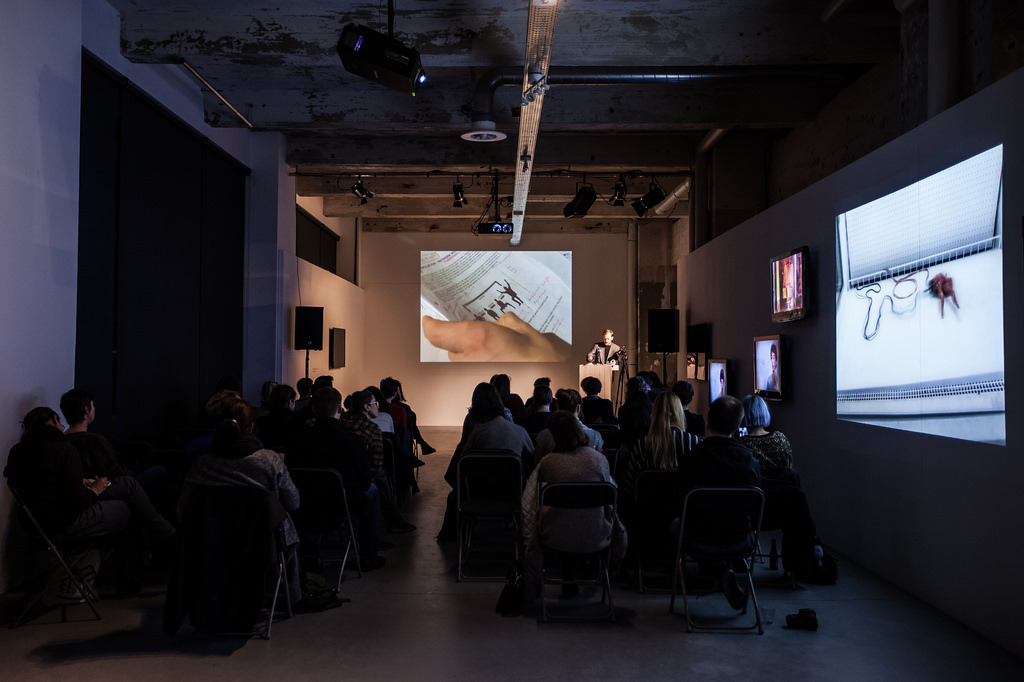 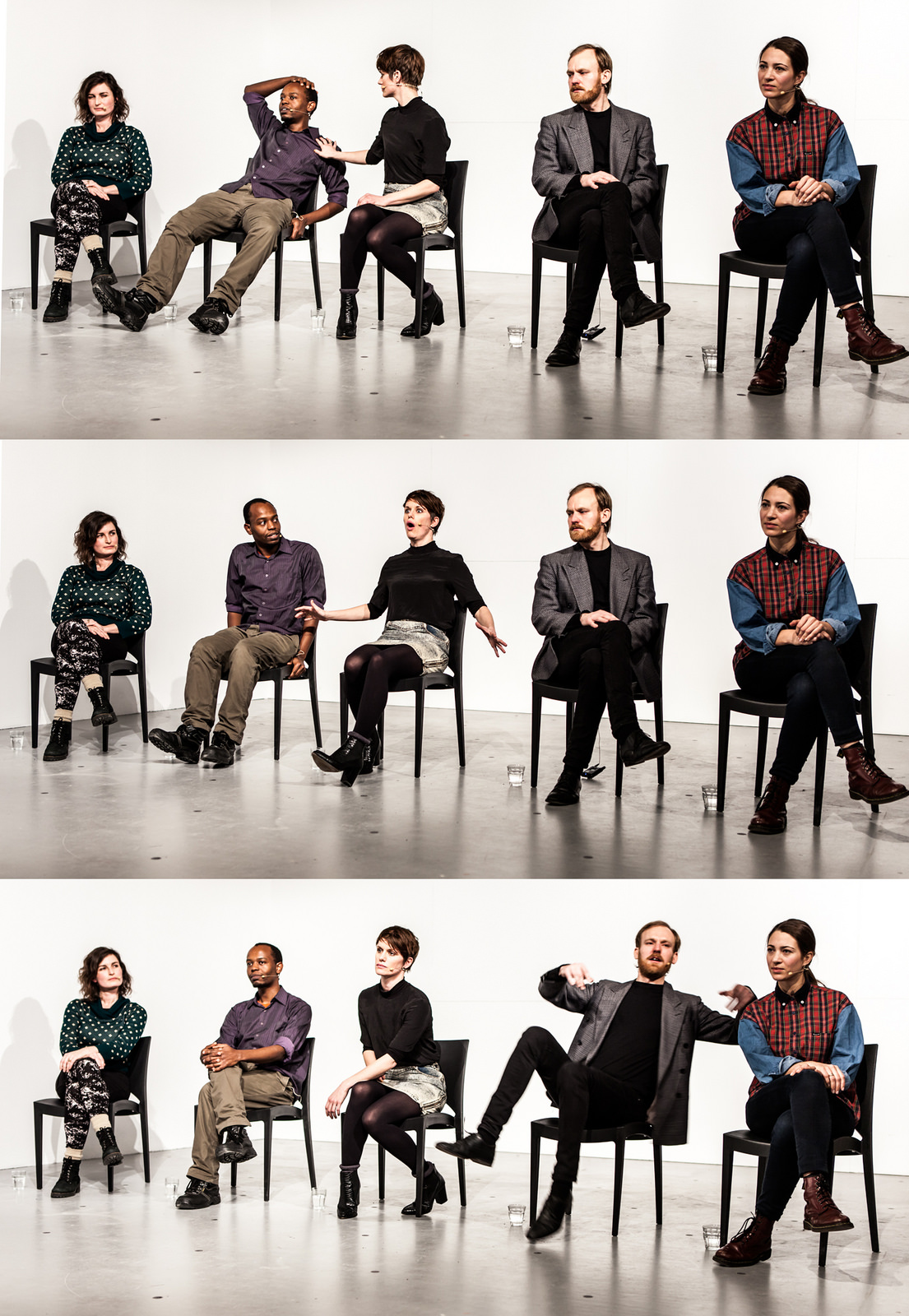 Orion Maxted is a performance artist and curator who investigates theatre in relation to systems and algorithms. More specifically he tries to makes machines out of people.

An example of artworks that interest him in that respect is Douglas Gordon’s 1993 video 24 Hour Psycho which, as its title clearly indicates, is a video installation showing Alfred Hitchcock’s 1960 classic slowed down so that it lasts for 24 hours. The piece contains the instruction to reproduce it in infinite variations: 24 hour Star Wars, 66 hour Jaws, etc. A work like that one made Maxted think about machines and about mass producing copies of an artwork.

Maxted works with improvisers whom he defines as ‘persons trained to process information in real time.’ He brings them together to ‘form a single thinking system.” Improvisation, according to him, is key to the process because it is full of algorithms, feedback process, etc.

He and his improvisers performed 2 works during the Body of Matter / BAD Award Special weekend. The first one was The Machine. Completely improvised using algorithms and patterns, the show explores our relationship to machines and the development of language. The actors reproduce and modify each other’s words and gestures according to an algorithm, creating a continually evolving feedback loop. The result is puzzling and entertaining, you sometimes wonder whether the human participants are obeying and serving the system or mischievously generating glitches.

The performance of the final evening worked in a similar fashion, except that it used systems biology computation to generate performance parameters for actors. 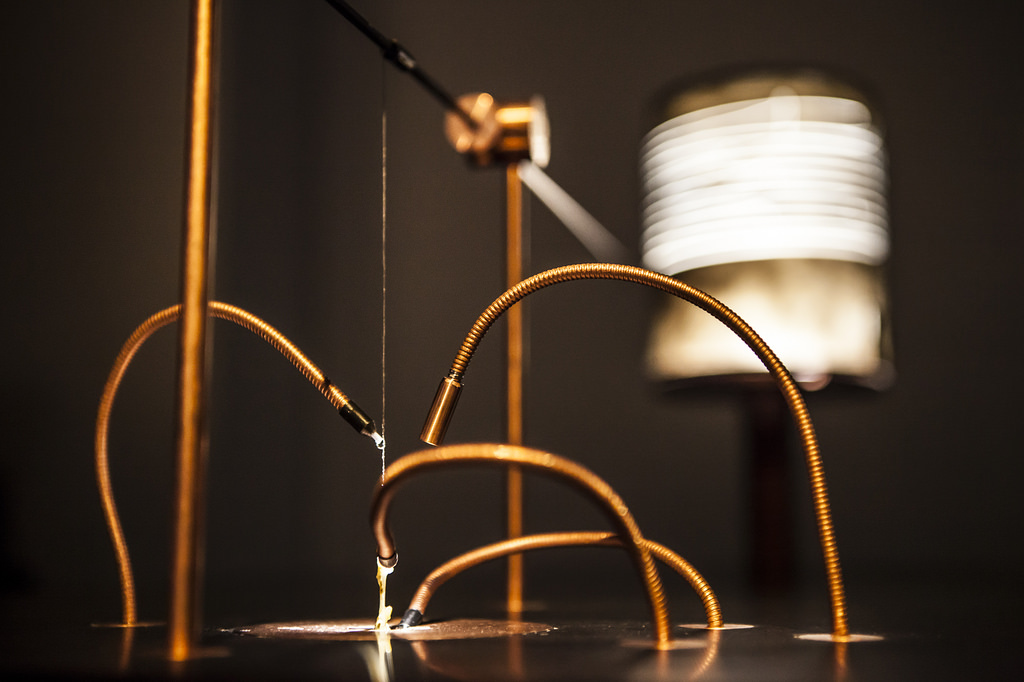 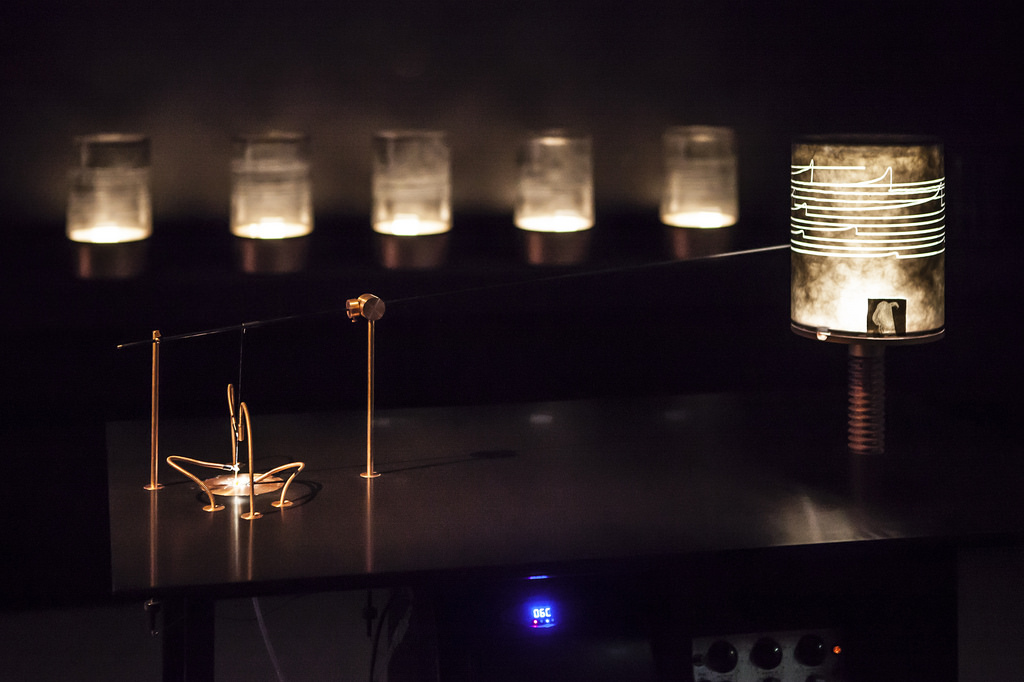 The elegant patterns of Špela Petrič‘s vases are drawn by mussels. More precisely by tiny muscles removed from the molluscs body and then attached to an electro-stimulated design apparatus. The muscles are kept ‘alive’ by being repeatedly washed with water and shocked so that each tiny spasm of energy they produce is used to scratch lines onto the object. Because the contractions happen only once every 20 minutes or so, the design process takes several hours. The work is both absurd and poignant. A creature is killed in service to the machine, the design, and the product. The work speaks of the commodification of life and the ruthless exploitation of living systems, but it also symbolizes us, the mass of humans actors entrapped in the machine of capitalism.

That’s it for part one! See you tomorrow same time, same place for my notes from Body of Matter / BAD Award Special Day 2.

My images from the Bioart weekend are on flickr.