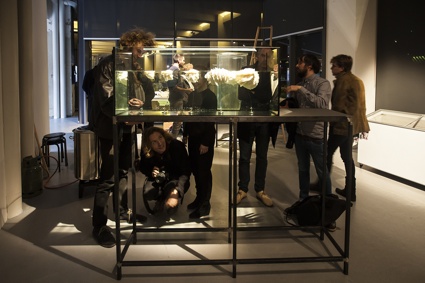 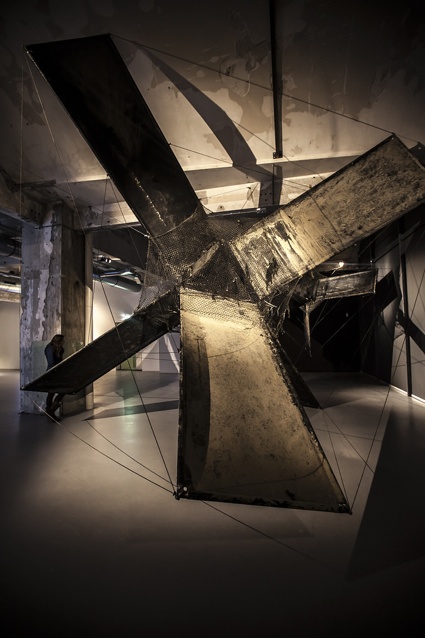 A bio art exhibition is a rare occurrence. A good bioart exhibition -one that makes you marvel at the art, question the science, ponders upon where all this means for society- is even more extraordinary. So if you’re in, near or not ridiculously far away from Eindhoven, do go and visit Matter of Life. Growing new Bio Art & Design at MU. There’s only a couple of weeks left to see the show but if i were you, i’d try and pop by on the 1st of March for the Matter of Life closing party. The subtitle of the event is Food Phreaking which sounds exciting enough.

MU and guest curator William Myers have selected nine projects ‘at the intersection of life sciences, art and design.’ Three of them are the winning projects of the Bio Art & Design Award 2014 (previously Designers & Artists 4 Genomics Award), a competition for young artists and designers hoping to collaborate with research institutes in order to develop works that use biotechnology in critical and compelling ways. A couple more projects in the show are authored by artists who have worked with the competition in the past. But what matters more to me is that there is a good balance of speculative scenarios and very down-to-earth experiments in this exhibition. One moment you’re dipping carrot sticks into a barbecue sauce made from ‘supermarket mutants’. Next, you’re wondering about the impact that commercial interests might have on natural selection.

Here’s a quick overview of the works i haven’t written about over the past few weeks. Starting with a work that took me by surprise: 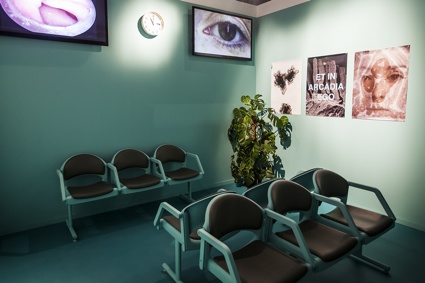 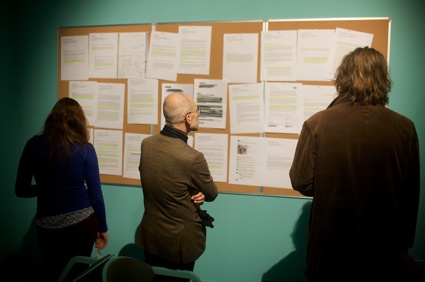 Charlotte Jarvis is collaborating with Prof. Hans Cleavers and Dr Jarno Drost at the Hubrecht Institute to grow her own cancer tumour outside her body.

Jarvis first has to undertake a rectoscopy. The colon tissue collected will be grown in vitro and then submitted to a series of mutations that will make it cancerous.

The project is about being able to look at cancer as we would look at other parts of ourselves. I am interested in actually seeing cancer ‘in the flesh’ – in making tangible something that is usually discussed in metaphors and in doing this exploring (evaluating?) the function of these metaphors when faced with the actual material.

ET IN ARCADIA EGO also echoes one of Jarvis’ previous works ERGO SUM in which she used stem cell technology to create a kind of ‘back-up’ self. While ERGO SUM explored how personalised medicine might enable us to extend our lives, the new work is using similar technology to explore the mechanisms of mortality.

The sample will also be used in professor Hans Clevers’ scientific research to study how cancer occurs in the body. The cells are of particular interest to him as they are the first he will have access to coming from a healthy patient sample. 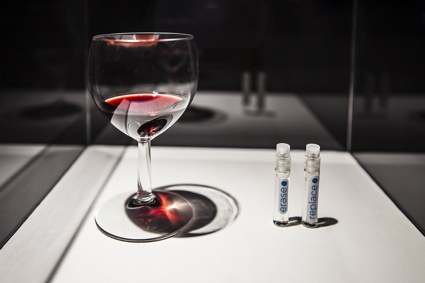 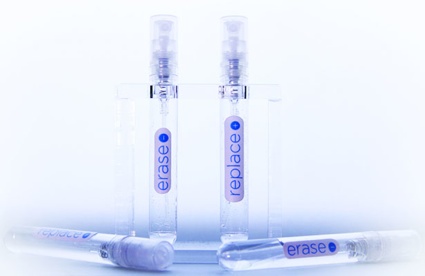 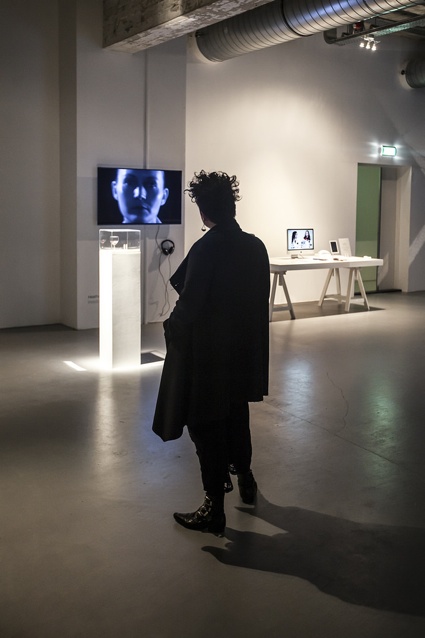 Heather Dewey-Hagborg‘s most famous work, Stranger Visions, made her realize that genetic surveillance is a real threat. “It just struck me that we were having a national dialogue about electronic surveillance, but this form of biological surveillance isn’t being discussed,” she told The Verge.

Invisble, which she is showing as part of Matter of Life, claims to be the answer to any fear of DNA profiling we might have. Citizens eager to avoid DNA surveillance can either buy the Invisible sprays or follow the recipe and make their own. To become genetically untraceable, you need to first spray Erase to any surface where you might have left some DNA evidence. You then follow with Replace, a spray containing a blend of genes that will ‘confuse’ any remaining trace of DNA. 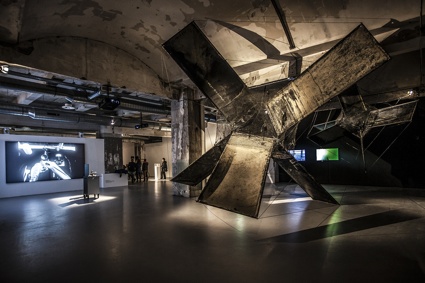 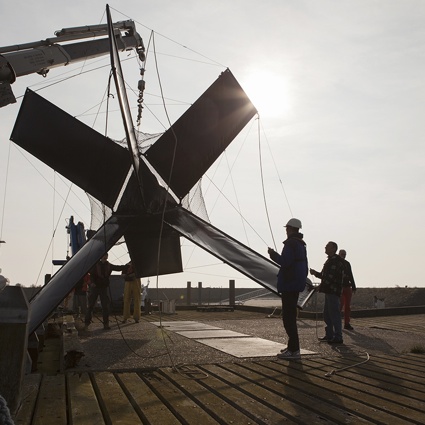 Špela Petrič worked with the Royal Netherlands Institute for Sea Research to build a windmill-like structure that serves as a habitat for sea life. Once released into the North Sea, the tetrahedron form would gently drift in unpredictable path, collecting sea plants, bivalves and other small creatures along the way. At some point though, the weight of the organisms accumulated will sink the whole colony.

The research, design and building of this work in the context of a research institute investigating aquaculture also challenges us with a question the artist poses “can the human fathom an investment into structures and processes that are non-utilitarian for the human?”

Naval Gazing was one of the winning projects of the BioArt & Design award. I think it was by far the strongest of the three. Unexpected, strangely alluring and challenging the audience to think differently about our relationship to nature. 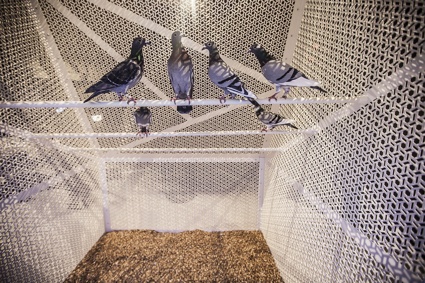 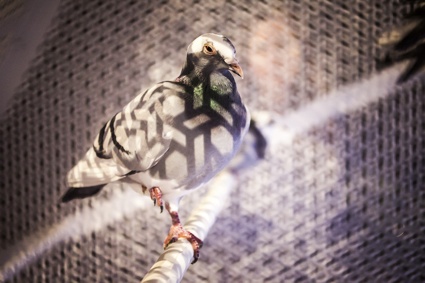 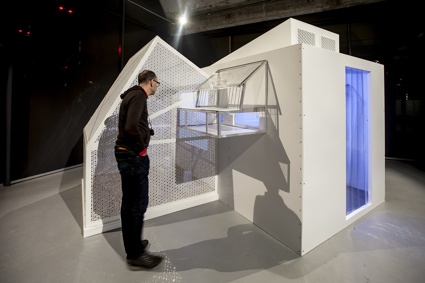 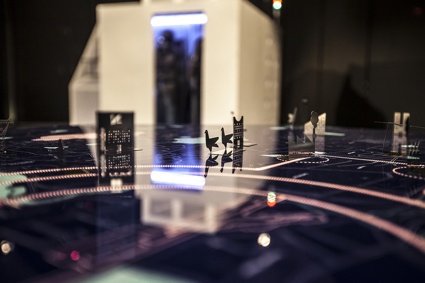 The Economics of Evolution: The Perfect Pigeon

The use of homing pigeons as messengers can be traced to thousands of years ago. Ancient Romans used them to spread news within their Empire. And the Greeks sent pigeons to communicate the results of the Olympic Games to other cities. Studio PSK, another winner of the Bio Art & Design Award, teamed up with the Centre for Ecological and Evolutionary Studies at the University of Groningen to explore how economic pressures might one day shape the species’ genetics, replacing thus natural selection. In PSK scenario, the bird becomes a tamper-proof biological courier used by biotech companies to protect their intellectual property.

Increasing competition between the Biotech and Pharma giants has sparked the ‘Cold War’ of the drug industry, with Genetic theft and piracy costing the industry billions, pressurising companies to take ever more inventive steps to protect their intellectual property.

In order to protect the most sensitive data from falling into the hands of competitors, Genicom Lifesciences, one of the smaller enterprises based in Hyderabad’s Genome Valley, is using pigeons as a kind of ‘offline data transfer’ in an attempt to securely deliver genetic data to its research partner Nayat Pharma. 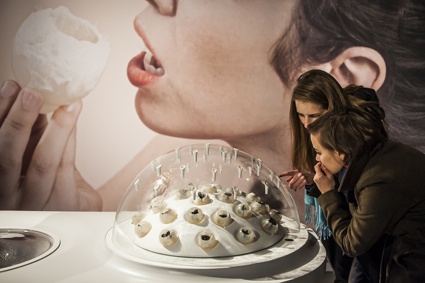 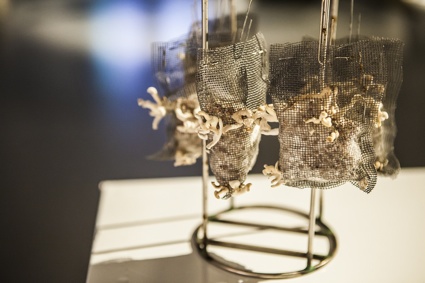 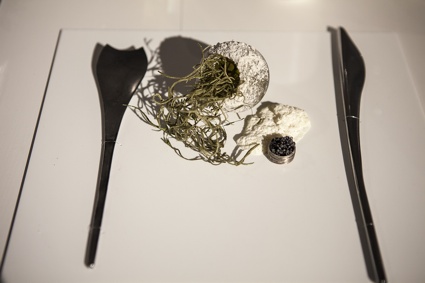 As the title of their work suggests, Julia Kaisinger and Katharina Unger have explored how to grow food from toxic plastic waste. The process involves fungi. The result in the plate is even more discouraging than anything i might have imagined. 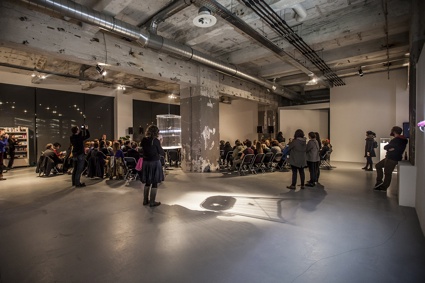 Opening night with talks at MU. Photo by Boudewijn Bollmann

Also part of the exhibition: Cobalt 60 Sauce, a barbecue sauce made from ‘supermarket mutants’ and FATBERG: Building An Island of Fat and A Simple Line. A zebra finch ponders upon abstraction.

Matter of Life. Growing new Bio Art & Design is at MU in Eindhoven until 1 March 2015.