One post about two important stories: a series of excellent webinars dedicated to art&activism and a few words about the origins of Unthanksgiving Day! 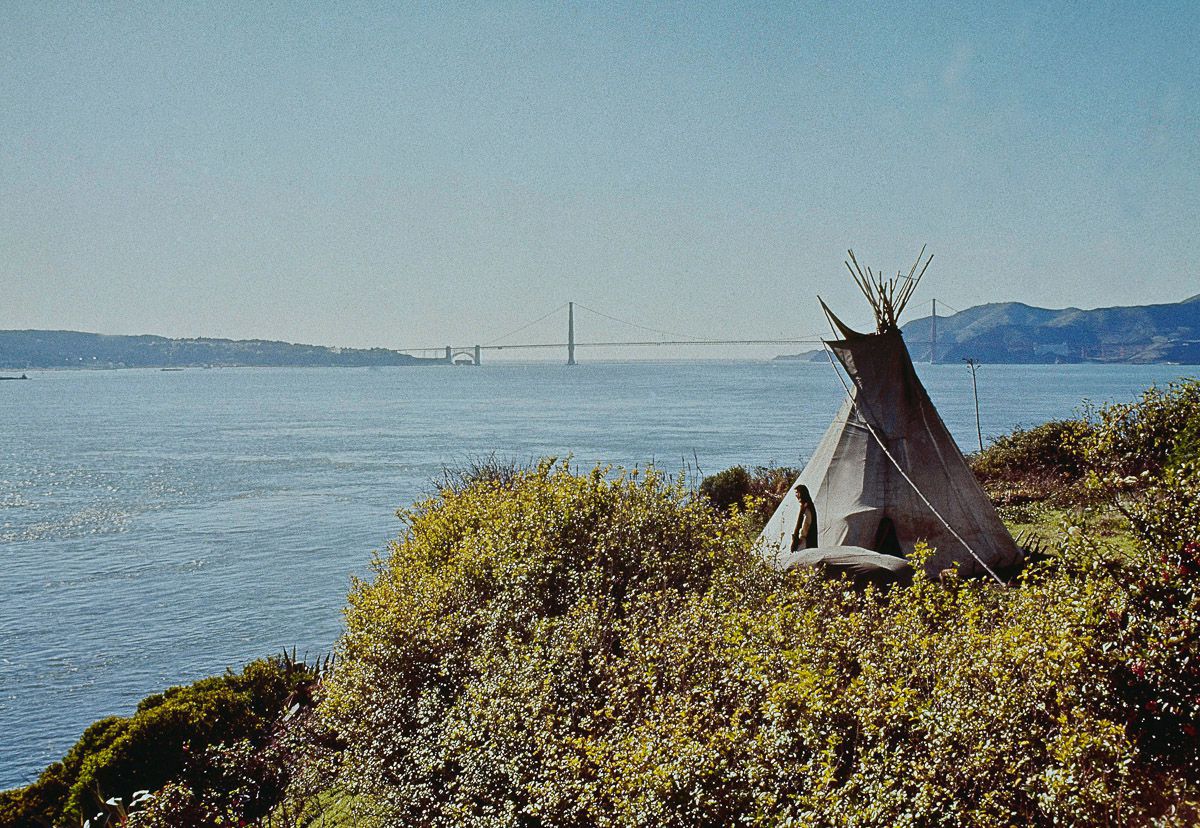 John Trudell, a Sioux poet and activist, looks out across San Francisco Bay from a teepee on Alcatraz Island, 1969. Image: AP, via mashable

Following the disheartening results of the last U.S. election, Steve Lambert and Stephen Duncombe of the Center for Artistic Activism decided to run a series of free, online webinars to motivate people in the U.S. and elsewhere to keep on fighting for a better world. And in case you miss an episode, they also upload the videos on their website afterwards. The webinars are rather brilliant. And fun. I’d highly recommend you have a look.

The next webinar is this Wednesday 21st of December at 3:00 PM EST. and the theme will be Cognitive Science, an import topic to consider in these post-truth times. The previous episode of the series looked at creative movements of the past. That’s where i first heard about Native American activists occupying the island of Alcatraz. The prison had been closed in 1963, deemed surplus federal property, and the Red Power Native American liberation group took the island in November 1969. They stayed there for a year and a half, demanding that Alcatraz be developed as a Native cultural center.

The cause brought global attention to the Native American plight and in particular Native issues related to sovereignty, repatriation and civil rights. 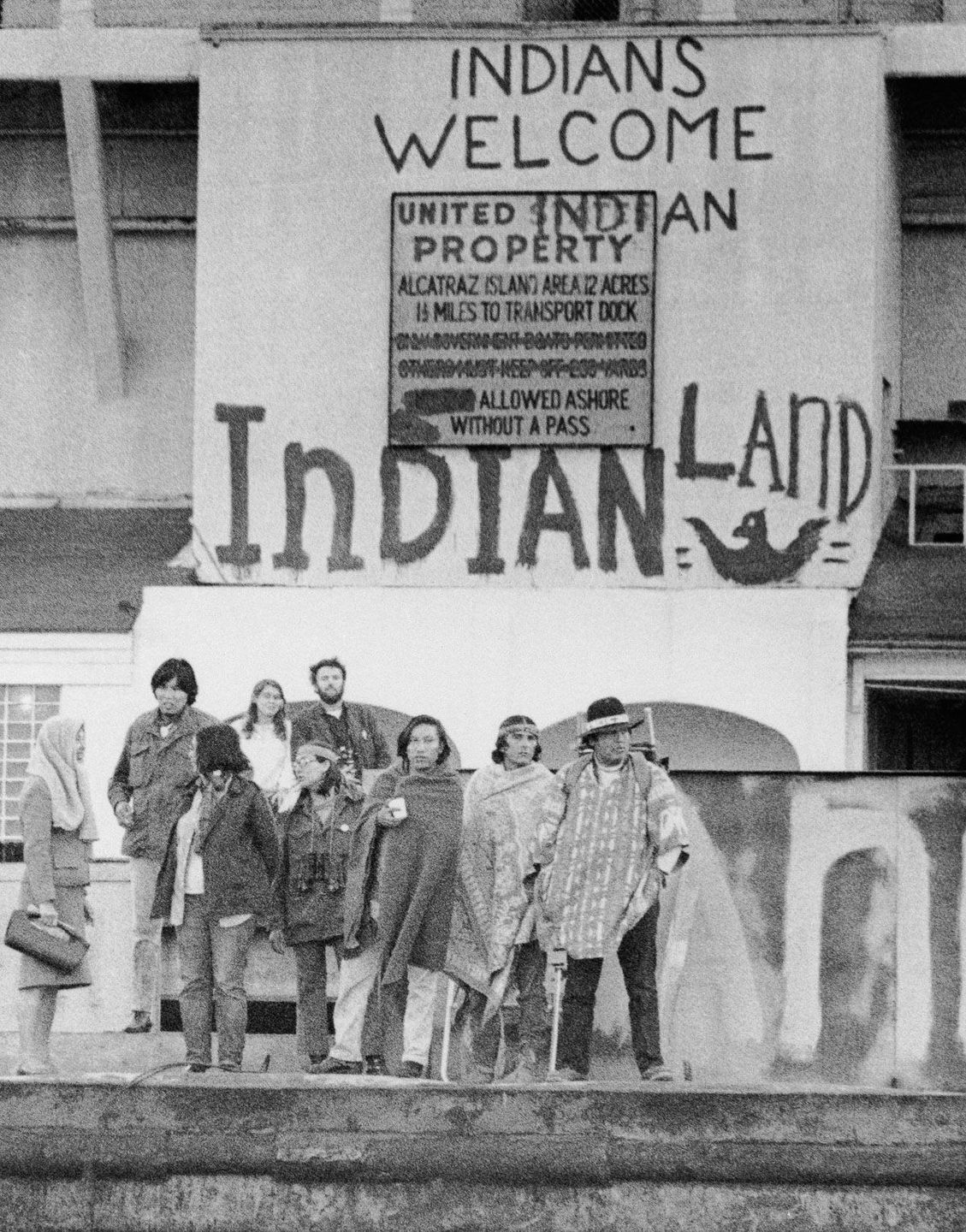 As a direct result of the occupation, new laws were passed to support Native American self-determination, recognition, health and education. Tribal lands across the country were returned and since 1975, an Unthanksgiving Day is held on Alcatraz Island to commemorate the protest event of 1969 and promote the rights of the indigenous peoples of the Americas.

The whole text of the Alcatraz Proclamation is a gem of dark irony. Here’s an extract:

We will purchase said Alcatraz Island for twenty-four dollars ($24) in glass beads and red cloth, a precedent set by the white man’s purchase of a similar island about 300 years ago. We know that $24 in trade goods for these 16 acres is more than was paid when Manhattan Island was sold, but we know that land values have risen over the years. Our offer of $1.24 per acre is greater than the 47¢ per acre that the white men are now paying the California Indians for their land.

We will give to the inhabitants of this island a portion of that land for their own, to be held in trust by the American Indian Affairs [sic] and by the bureau of Caucasian Affairs to hold in perpetuity—for as long as the sun shall rise and the rivers go down to the sea. We will further guide the inhabitants in the proper way of living. We will offer them our religion, our education, our life-ways, in order to help them achieve our level of civilization and thus raise them and all their white brothers up from their savage and unhappy state. 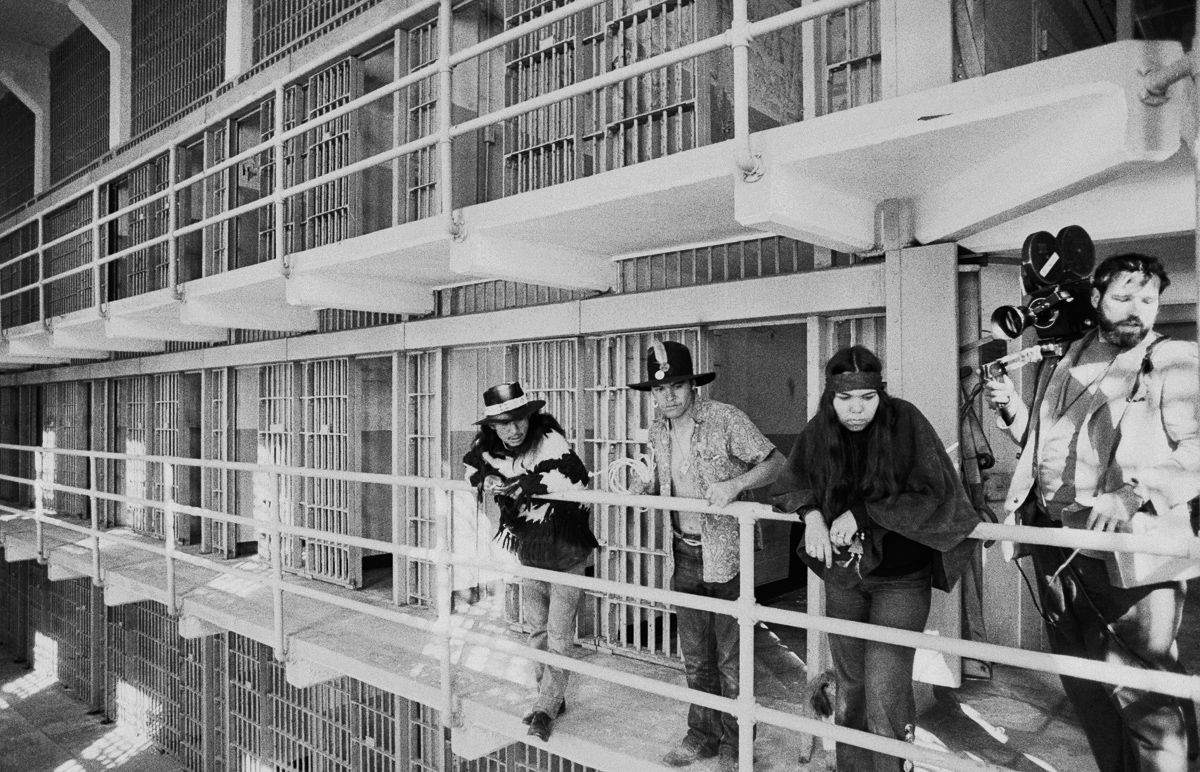 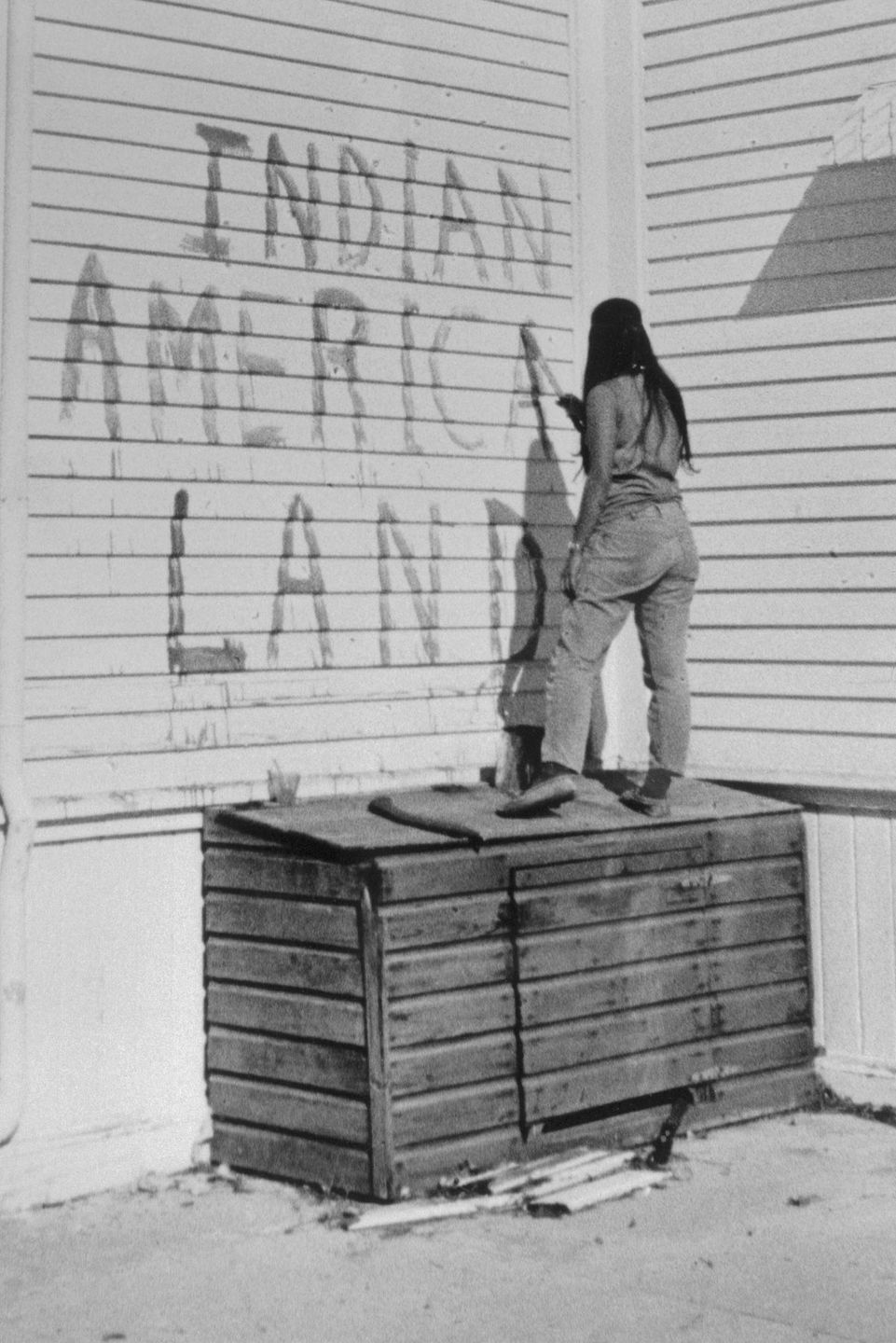 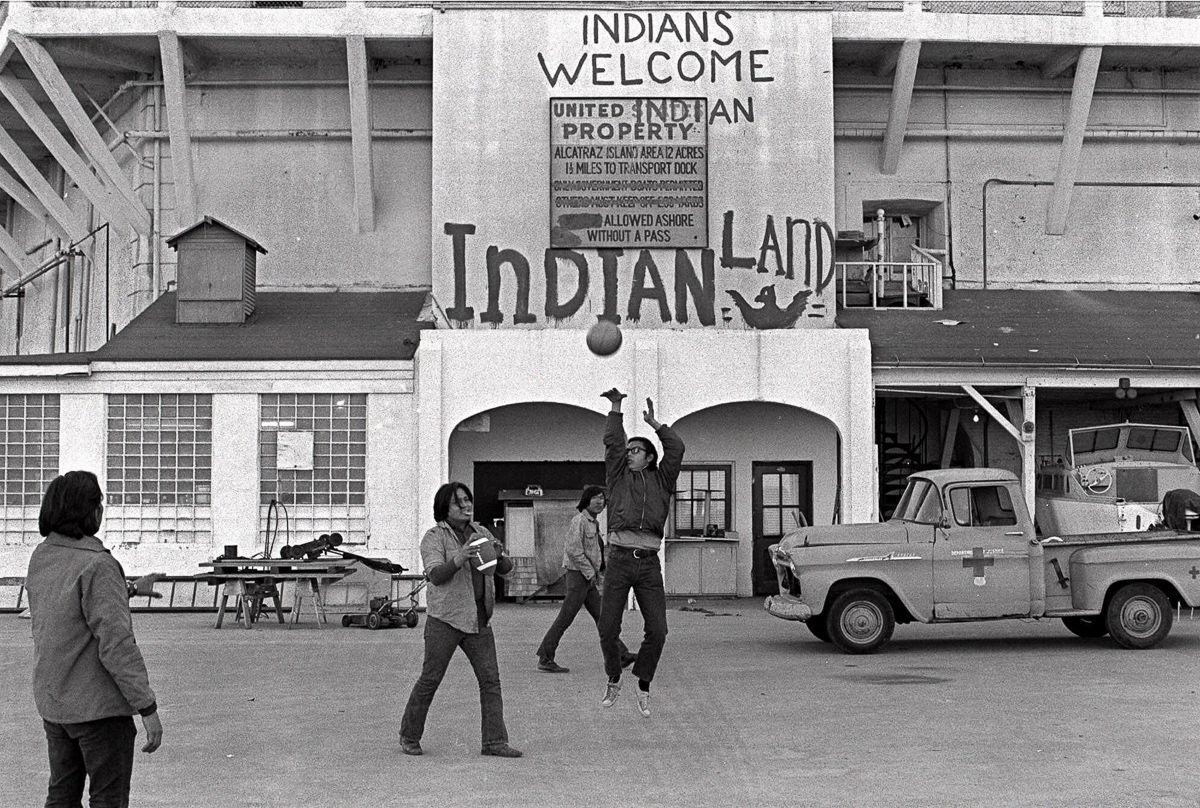 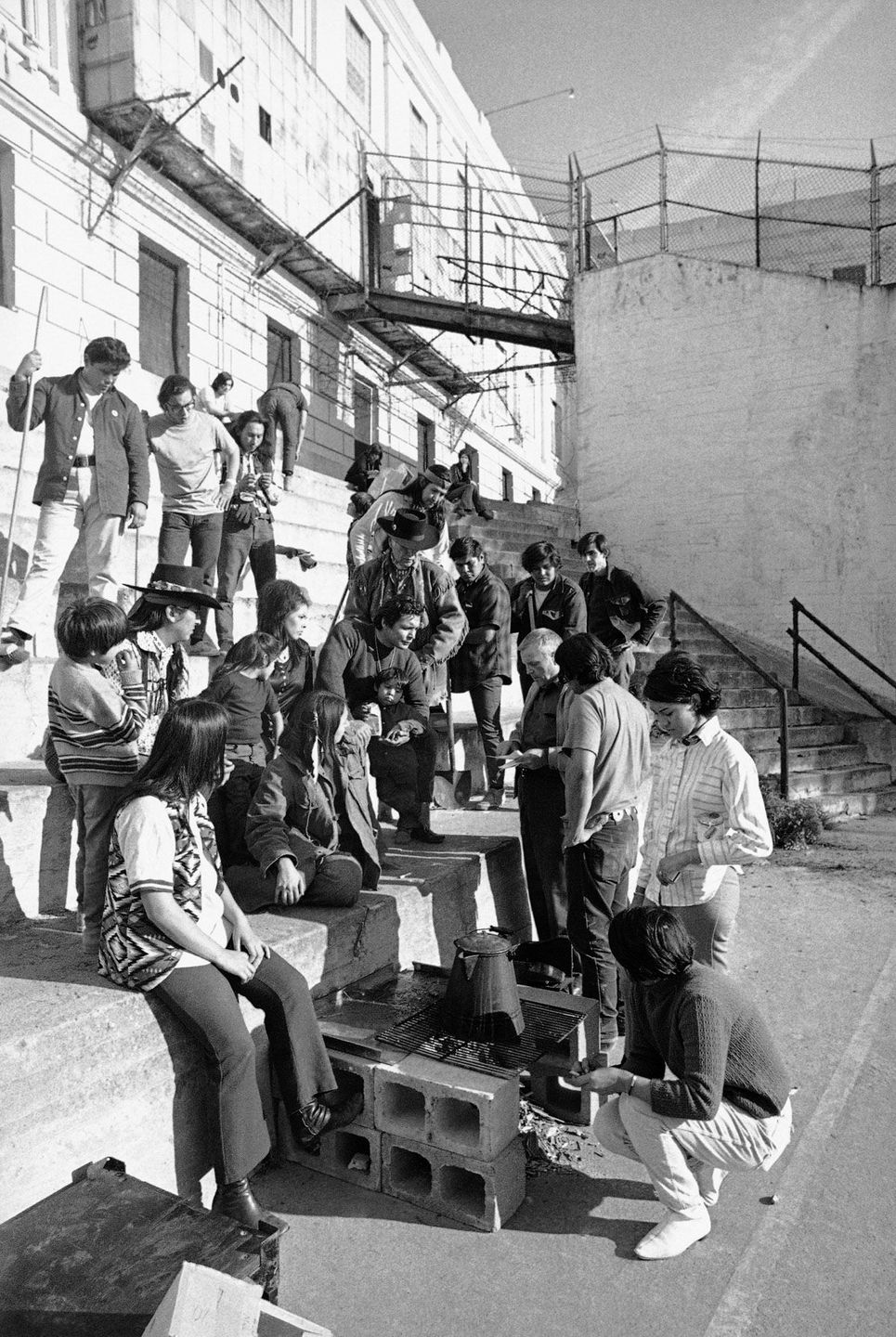 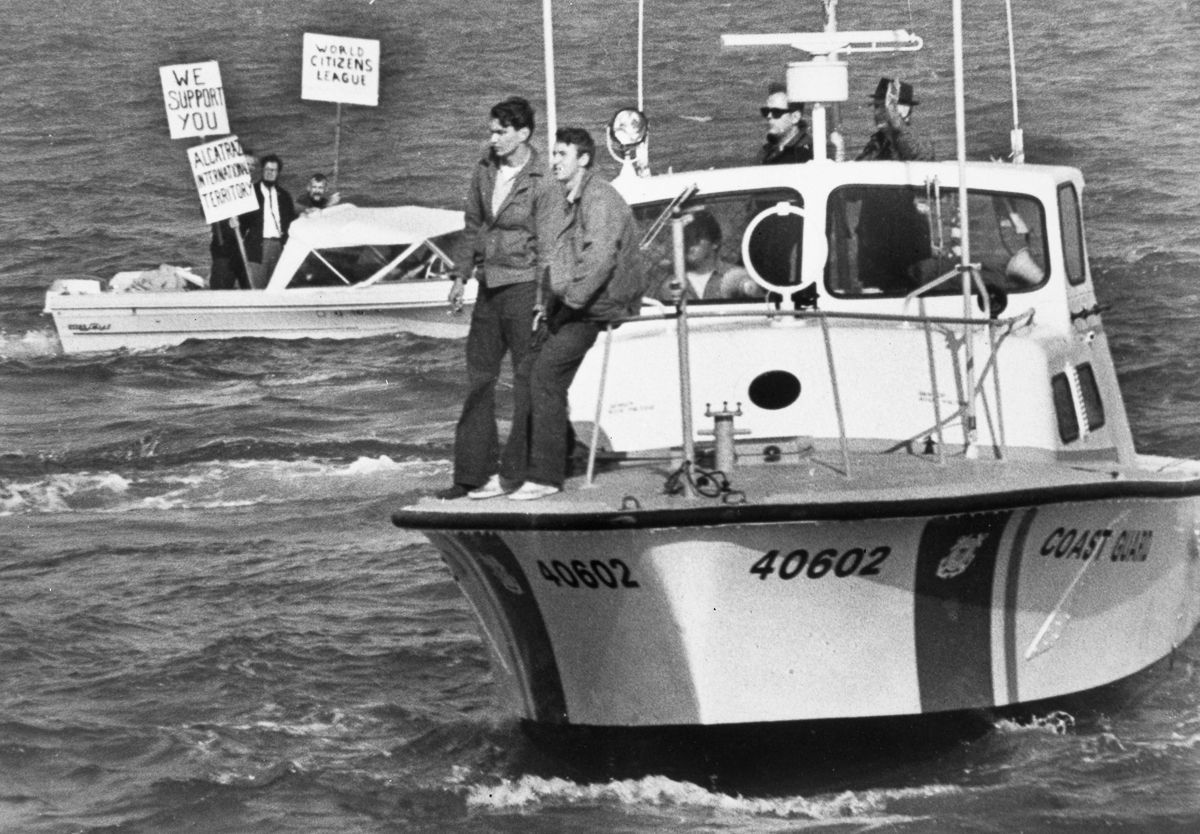 A Coast Guard boat prevents supporters of the occupation from approaching the island, 23 November, 1969. Image: Bettmann/Getty Images, via mashable 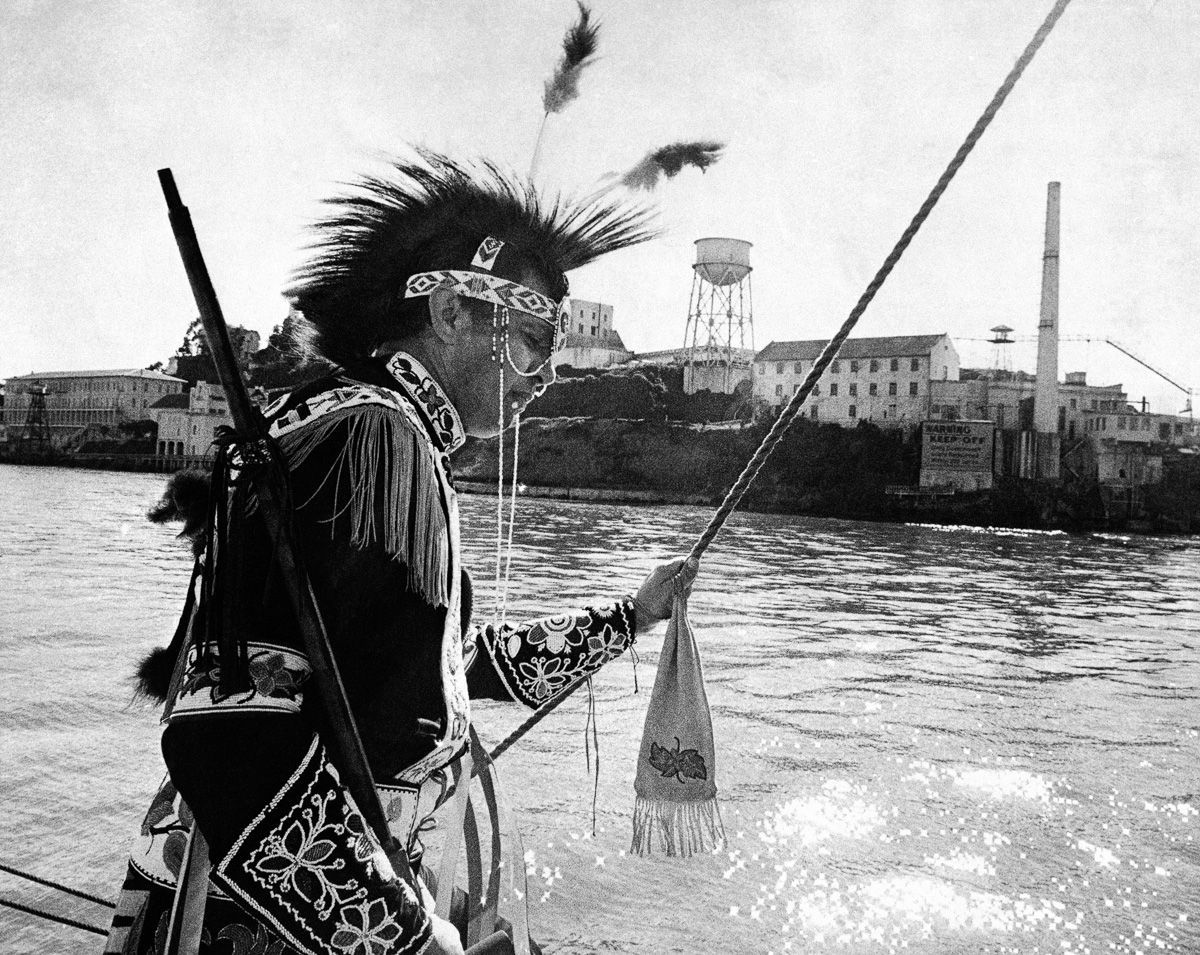 Adam Norwall, a Chippewa man, stands aboard the clipper Monte Cristo as it sails around Alcatraz, 9 November 1969. Image: AP., via mashable 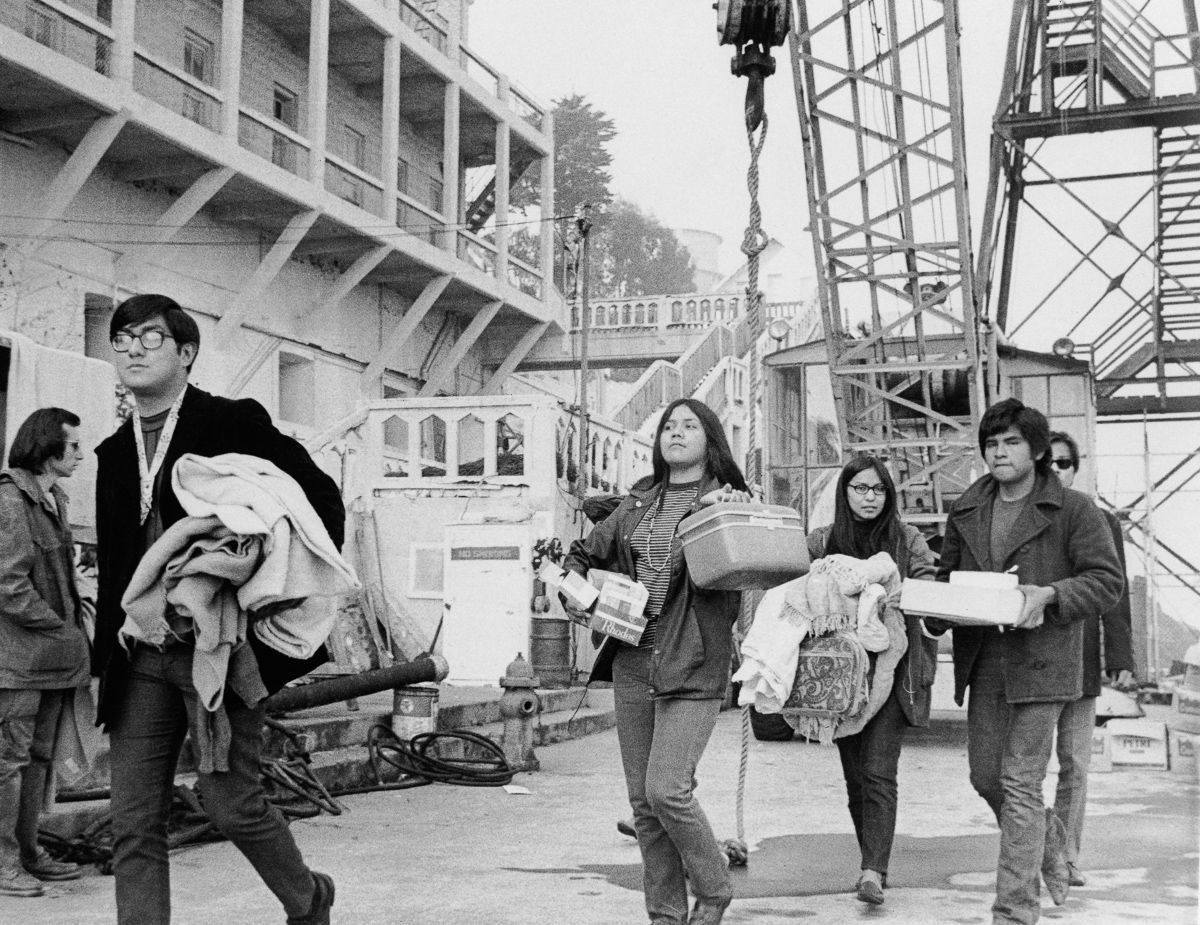 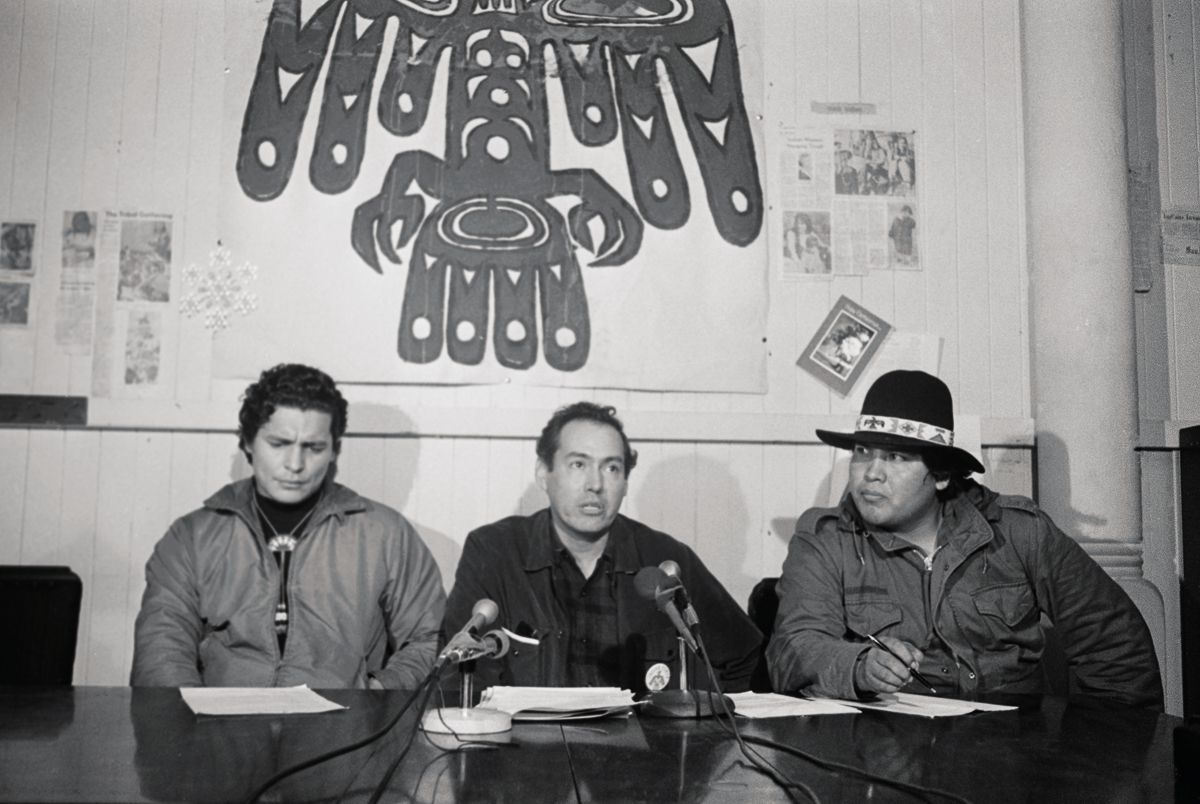 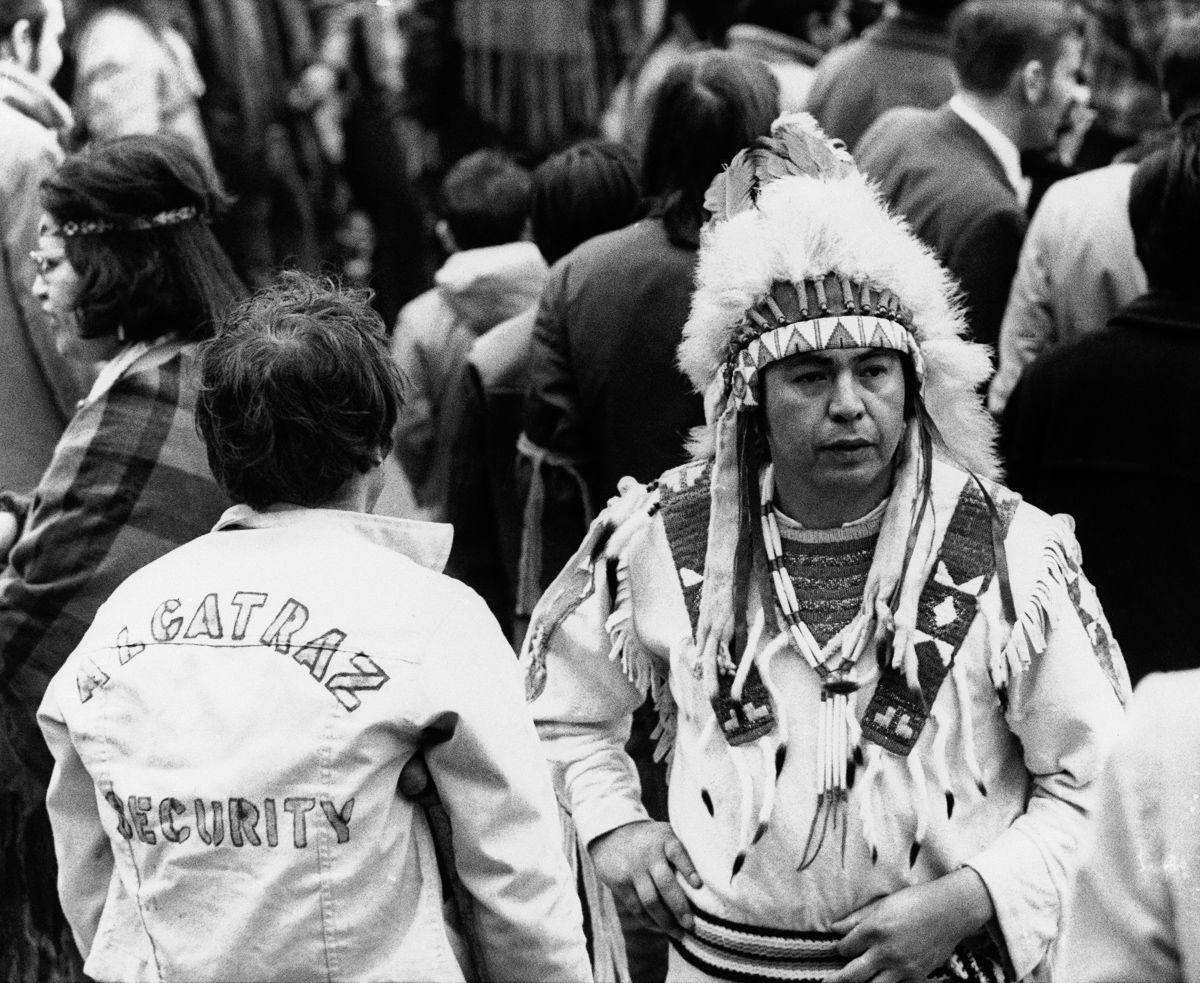 Native Americans, including a veteran of the Alcatraz occupation, demonstrate outside the federal courthouse in Seattle to demand that Fort Lawton be turned over and made into a cultural and educational center, 1970. Image: Barry Sweet/AP, via mashable 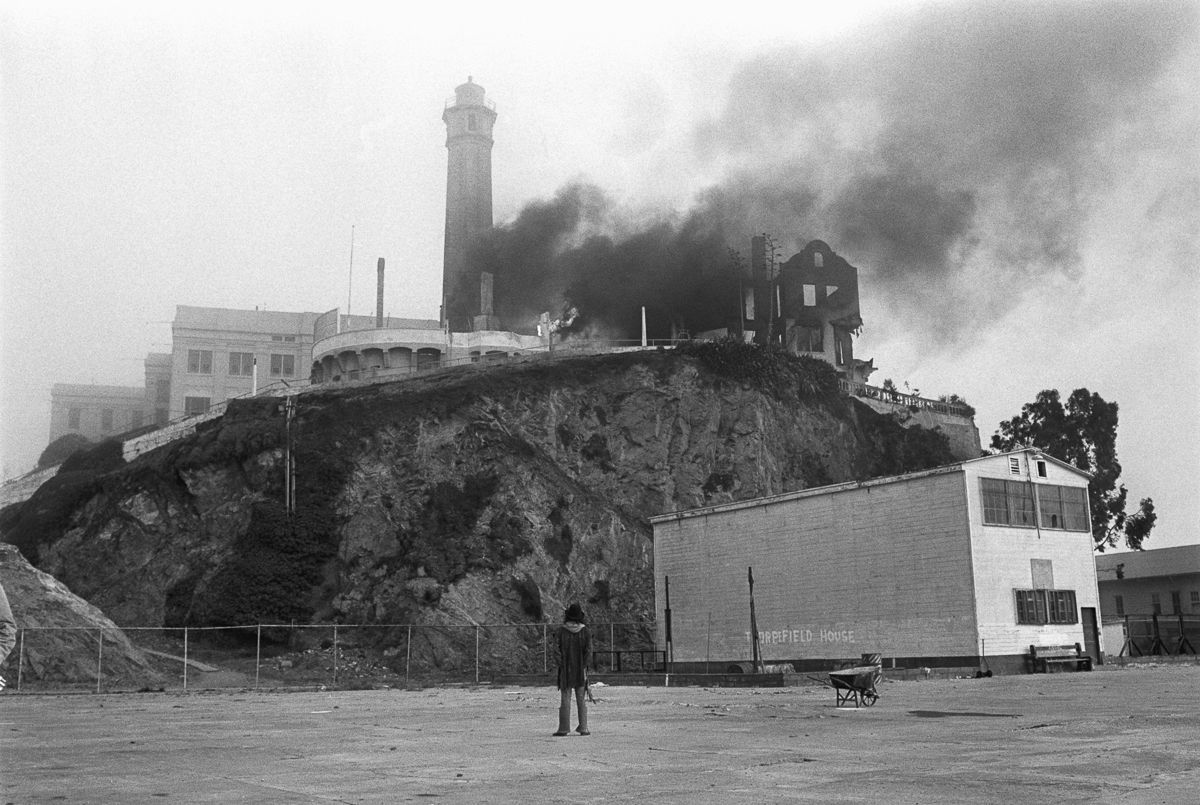 In 2011, “We Are Still Here,” a multi-media exhibit documenting the occupation, opened on Alcatraz Island.