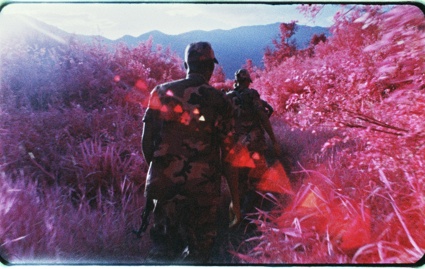 There’s a couple of cities where i keep going over and over again just because they have an art center worth a several hour long journey. Some of them may or may not be on your usual culture map. There’s Eindhoven, Hasselt, Manchester and there’s Florence where i traveled again a few weeks ago to see the exhibition Unstable Territory. Borders and identity in contemporary art at the Centre for Contemporary Culture Strozzina.

The show presents artwork that reconsiders the notion of territory in a time when the obsolescence of concepts such as the nation state and borders coincides with new forms of nationalism and a corollary desire to affirm the individuality of a community or to protect their privileges with the construction of new physical demarcations. The map of the walls being erected to separate people from each other that The Guardian has recently published illustrates the extent of the latter tendency.

The astonishing development of mobility for both people and goods, the digitisation of communication and knowledge, migration and an increasingly global economy have all radically changed people’s perception of territories, borders and boundaries. In view of the instability of these concepts crucial to the definition of personal identity, two different -though not necessarily conflicting – trends appear to be taking shape: one based on seeking shelter in the safety and proximity of the micro-territory, the region or even the family; the other, as theorised by sociologist Ulrich Beck, involving a new conception of cosmopolitanism in its most democratic and egalitarian sense. 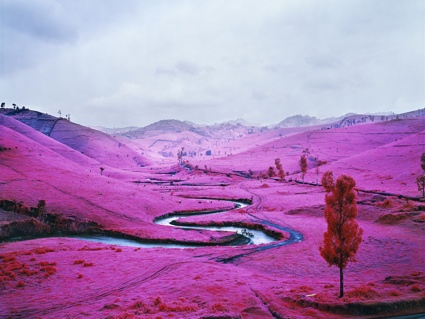 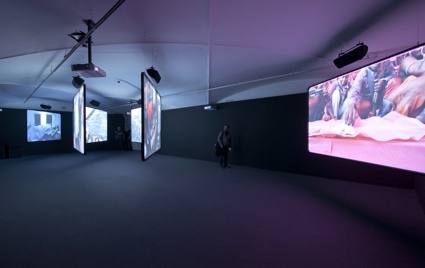 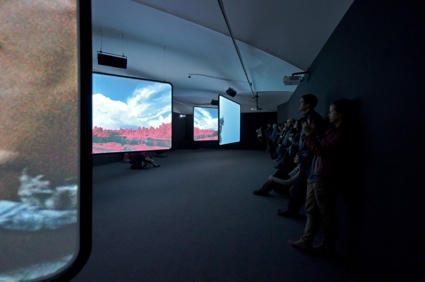 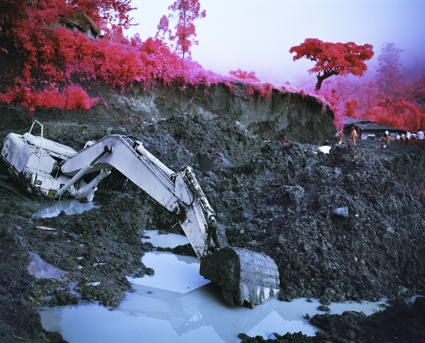 The Enclave, by Richard Mosse, shows territory in the grips of violence. The six-channel video-installation translates the ongoing civil war opposing the central government of the Democratic Republic of Congo and groups of rebels for the control of the provinces of North and South Kivu, into disturbing yet seducing hues of pink and magenta.

The pink colour is due to the special infrared film that Mosse is using. The Aerochrome film was developed for surveillance purposes in the 1940s (Kodak stopped the production of the film in 2007 but Lomography has since brought it back to life.) This infrared technology allowed the army to detect armaments that were concealed by vegetation. Since the DRC landscape and the camouflage outfit of the militia are dominated by shades of green, the resulting images come with an eerie balance of threat and beauty.

The Enclave does not allow us any firm ground, a perspective from which to contemplate reality according to conventional standards like good and evil. Mosse does not explain, or tell a story, or illustrate, nor does he seek symbols for a possible further meaning. The Enclave seems to hover between brutality and poetry, between the testimonies of dramatic stories and unusual experiences and the universality of images of Africa at war. 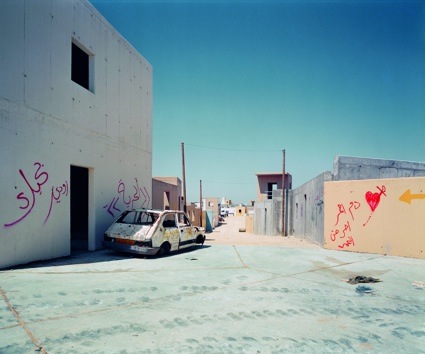 I’ve mentioned the work of Adam Broomberg & Oliver Chanarin several times in the past. I had actually discovered them a few years ago at Manipulating Reality, another exhibition at Strozzina.

This time the artists are presenting Chicago, a series of images of the mock-up of an Arab town built in the middle of the Negev desert by the Israeli Defense Force for urban combat training. “Everything that happened happened here first, in rehearsal”. All wars led and to be led by Israel in the future get a test run in the streets of Chicago, where the only traces of human beings are photographs of Arab militia used for target practice. Chicago comprises different settings that reflect the terrains where the IDF might have to strike: a fake refugee camp, a fake downtown neighbourhood, a fake rural village, a dense market area, etc. 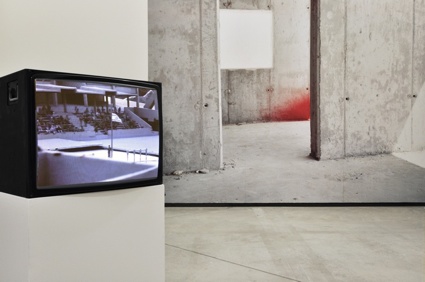 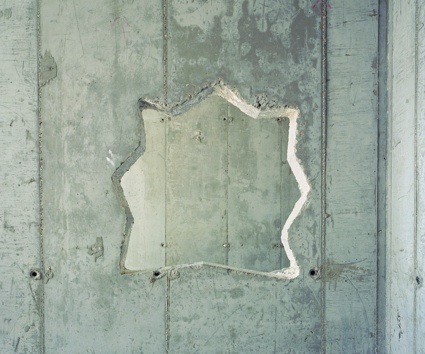 Two large wallpapers on the walls of the gallery room communicate “real” details of the “fake” Chicago. The star-shaped hole in the cement walls is a scar left by “worming”, a tactic used by IDF soldiers to move through dense urban areas while avoiding streets and squares where they are more likely to be attacked. Using explosives or hammers, the soldiers carve their way horizontally through walls and vertically through ceilings and floors. The fact that some of the buildings they invade are inhabited by innocent civilians is an irrelevant detail for the IDF. This form of movement, described by the military as ‘infestation’, sought to redefine inside as outside, and domestic interiors as thoroughfares, explains Eyal Weizman. The IDF’s strategy of ‘walking through walls’ involved a conception of the city as not just the site but also the very medium of warfare — a flexible, almost liquid medium that is forever contingent and in flux.

The privacy of the home is thus violated. Meanwhile, the other wallpaper shows the opposite end of the spectrum or how the road, a public place of movement and exchange, is instead literally walled up. The wallpaper is indeed zooming on a detail of the walls that border the roads built for the transit of Israeli colonists through the Palestinian territory in which they live, to arrive safely in their workplaces in Israel. 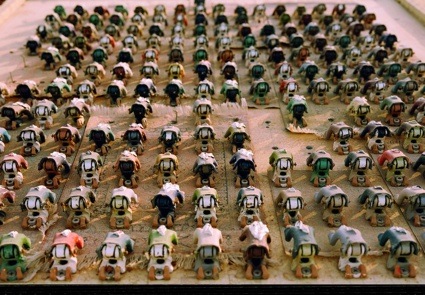 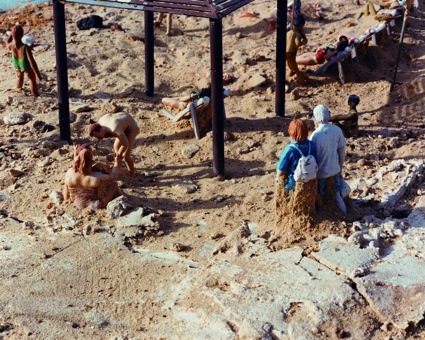 Broomberg & Chanarin are also showing a video of Mini Israel and that one was new to me. Mini Isreal is an automated model of the country, built as a tourist attraction and it looks far more sophisticated than the Mini Europe my parents always tried (and failed) to convince me to visit when i was growing up in Belgium. Just like Chicago, the miniature park filters reality, reflecting on the theme of the real vs the symbolic construction of a territory. Emphasis is put on ancient history and the building program of new infrastructures and new settlements. The Arabs, however, are mere extras, they are dressed in traditional attires, they pray, attend to their livestock and generally seem to be far less refined and modern than the Israeli. Furthermore, the makers of Mini Israel have chosen to represent their country as one devoid of any Wall, checkpoints, nor observation tower. 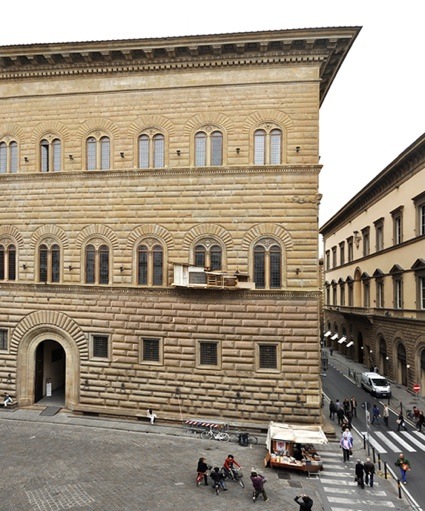 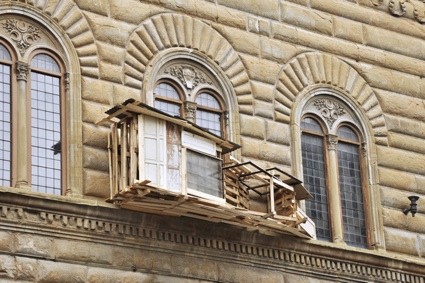 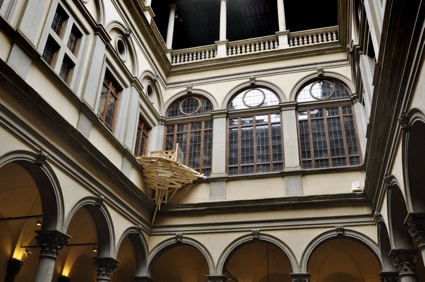 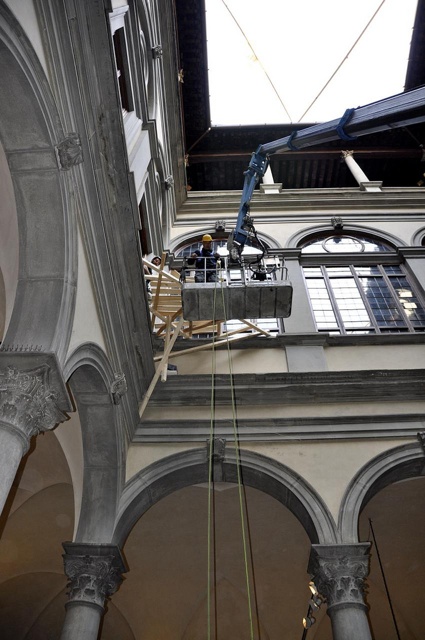 The exhibition leaves the field of political conflicts with the temporary constructions that Tadashi Kawamata has grafted on the facade and courtyard of the Palazzo Strozzi, creating an amusing contrast between the majestic Renaissance building and his parasitic precarious wooden constructions that evoke dwellings erected in emergency situations. The Three Huts redefine and redesign the territory of the palazzo: they are attached to it and as such extend its borders but they are also alien structures bound to be dismantled and rebuilt in some other part of the world by the artist. 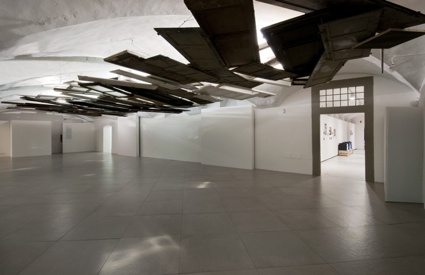 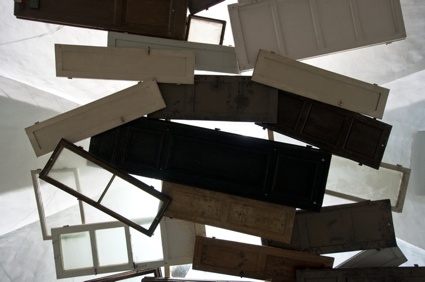 Kawamata has also created a new installation for the CCC Strozzina gallery space. Having discovered dozens of disused doors and windows that were left in storage at Palazzo Strozzi, the artist flipped them from their usual vertical position to an horizontal one and had them hang above the heads of the visitors. The result is stunning. I would normally never pay much attention to doors but seeing them floating from the ceiling give them a poetical dimension. The doors suggest a world on the other side and as such, they redefine the proportions of the space. 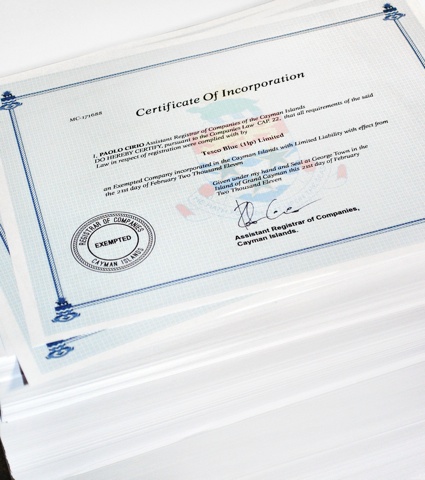 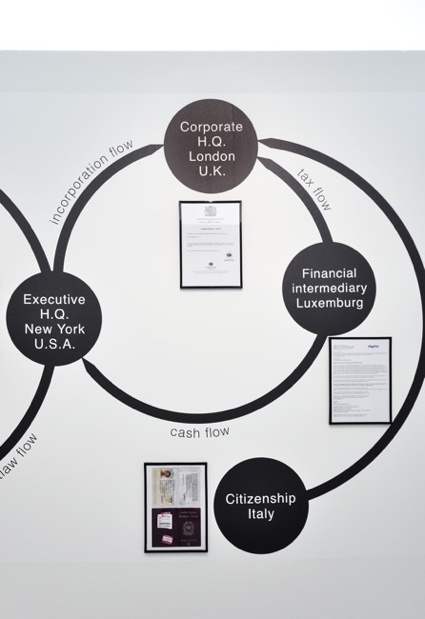 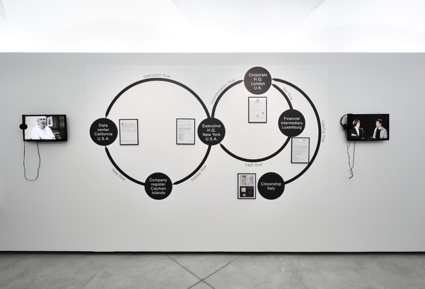 Loophole for All, by Paolo Cirio, looks at the notion of territory from an economic perspective. At the core of the project are the offshore jurisdictions, the tax havens where corporations place their headquarters in a bid to avoid tax controls. After a thorough research of the mechanisms that enable the ‘de-territorialization’ of data, money and information (see video below), the artist made accessible to every citizen a scheme to benefit from the tax evasion in the Cayman Islands that so far was the sole privilege of multinational companies.

The artist set up a limited liability company with headquarters in London, Paolo Cirio Ltd. He then created an online platform where anyone can select a company from the over 200,000 companies fiscally registered in the Cayman Islands and obtain, for 99 cents, a certificate that enables them to generate invoices in that company’s name. For $50, the user can also obtain their own post office box in the Caymans where they can receive invoices that, through the intermediary of another post office box in New York, are returned to the user’s real address anonymously.

On his website, Cirio sells certificates bearing his signature as the proprietor of the company granting licenses. These documents become the physical and concrete result of his work, works that allow an ironic critique the notions of authorship and reproducibility of a work of art, but also of the system of attribution of its commercial value. The forced closure of the account associated with Cirio’s website by PayPal further amplified this type of reflections, leading the artist to opt for free concession of the license certificates that a user can select on the Loophole4All.com website and that are in distribution during the exhibition. 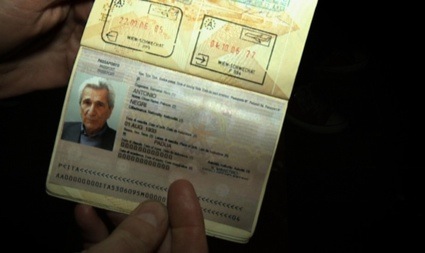 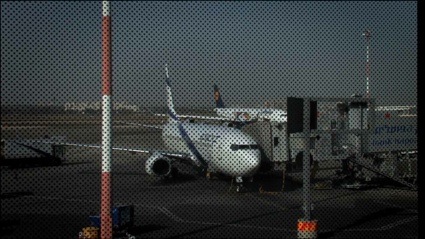 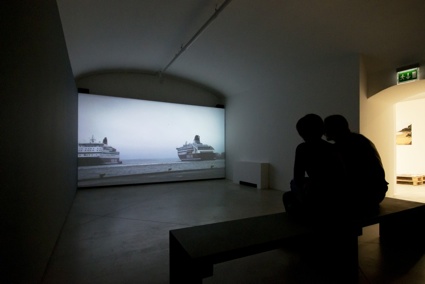 The Right of Passage investigates how the nation state dictates the conditions of political, social and economic inequality through the granting (or denial) of citizenship. The artists interviewed curator Ariella Azoulay, philospher Antonio Negri, political theorician Sandro Mezzadra as well as a number of people who live, under various degrees of legality, in Barcelona. It is striking to hear how a white guy who has no ‘paper’ encounters less hurdles in his everyday life than a black guy who lives in Barcelona legally.

Ressler and Begg question the relationship between the structure of the Nation-State–the legacy of an order that has been superseded, if not by laws, then by facts–and the individual who, if deprived of bureaucratic documentation, finds his or her freedom of movement, and very identity, denied. 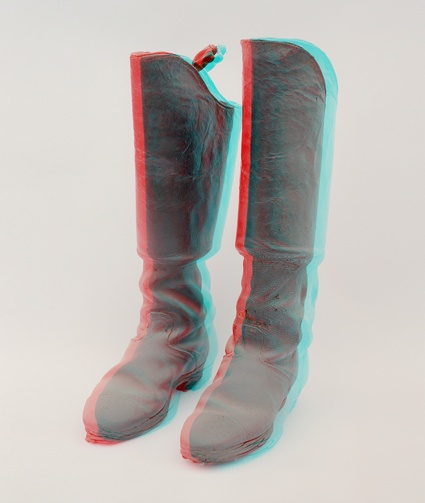 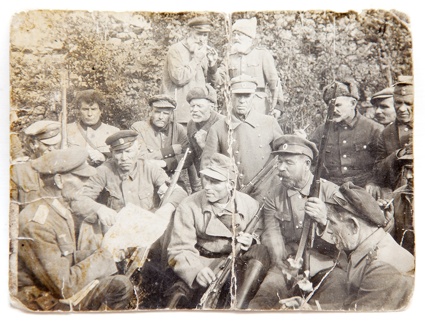 Cossacks studying a map in a wood, unknown date 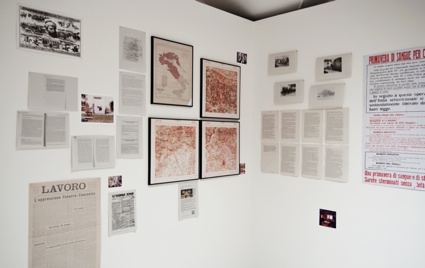 Series “Approximation to the West”, 2013. Photo by Marino Margheri

The Cool Couple, aka Simone Santilli and Niccolò Benetton, investigated a little-known episode from the final months of the Second World War. Between October 1944 and April 1945, Carnia, a peripheral region of Friuli Venezia Giulia, was occupied by over 20,000 Cossacks. The soldiers and their families were assigned the area, re-baptized “Kazackaja Zemlja” (Cossack land in Northern Italy), as a thank you gift from the Nazis for their help during the war against the Soviet Union.

The episode offers another opportunity to examine the concept of the Nation-State and the enforced encounter between different ethnic groups and cultures.

Research revealed that traces of the Cossacks passage had been concealed, and often gleefully destroyed by local people after the victory of the Allies and the repatriation of the Cossacks. The memory of the events transforms into reconstruction, and above all narration, which takes account of the reality but also of the projections and the suppressions. 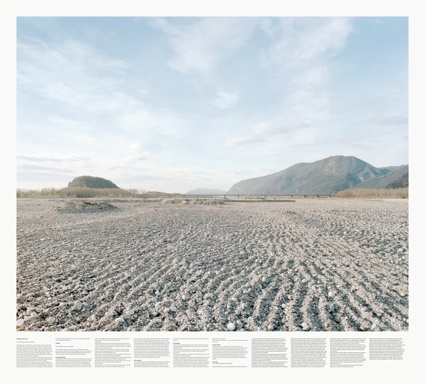 Fiume Tagliamento, Trasaghis #001A/B, from the series “Approximation to the West”, 2013 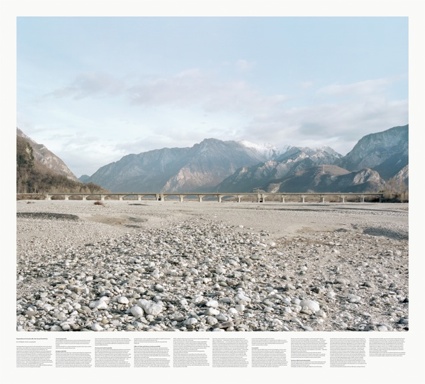 Fiume Tagliamento, Trasaghis #001A/B, from the series “Approximation to the West”, 2013

The Fiume Tagliamento, Trasaghis #001A/B diptych shows the Tagliamento River, taken from the same viewpoint with a 180° rotation: this was the border crossed by the Cossacks when they invaded the area, and then crossed again when they were sent back to the Soviet Union.

Unstable Territory. Borders and Identity in Contemporary Art was curated by Walter Guadagnini and Franziska Nori. It remains open at Centre for Contemporary Culture Strozzina, Palazzo Strozzi, Florence until 19 January 2014.