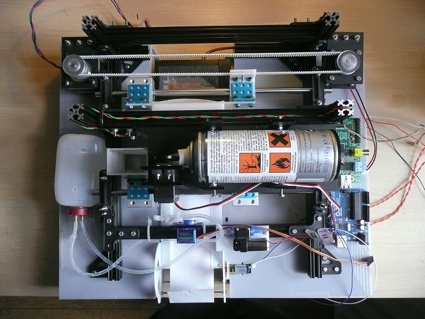 Last year, news emerged that Russia’s agency responsible for the Kremlin security was buying electric typewriters and “expanding the practice of creating paper documents” in a bid to prevent leaks from computer hardware. A few months later, The Guardian was forced to destroy the computer equipment that stored the NSA files provided by Edward Snowden. Diego Trujillo Pisanty saw reminiscence of the Cold War in these two stories and in other current news related to state espionage.

His This Tape Will Self Destruct machine prints self destructing documents. The documents merge images and texts extracted from Cold War fictions with excerpts from current secret documents. A short amount of time after they’ve left the machine, these documents burst into fire and their content is gone forever.

This Tape will Self Destruct from Diego Trujillo on Vimeo.

What is the paper made of? How come it ‘auto-combusts’?

The paper is normal thermal paper used in receipt printers. As the document is printed it is treated with glycerol and a potassium salt. When these two substances mix at the end of the process they react exothermically to produce fire, this reaction ignites the paper and the heat also blackens any unburnt parts of the document as it is printed on thermal paper. The chemistry behind this is actually a common GCSE demonstration so it’s nothing too complicated.

i’d also like to understand how the documents are generated. They are “a mixture of images and texts extracted from Cold War fictions paired up with excerpts from current secret documents”. Are they generated randomly? do you design them yourself?

I designed (or more accurately curated) the documents myself based on relationships I saw between images and texts. For example one of the documents contains the famous Mission: Impossible (1966) phrase:

“As always, should you or any of your IM force be caught or killed, the Secretary will disavow any knowledge of your actions.”

Presented next to an excerpt from an NSA leaked document reading:
“All publicly available information regarding work on this contract at Mangfall Kaserne will be sanitized so that no association with NSA will be made. This will entail removal of references to Maiyland Procurement Office/MPO, N S A-r elated DODAICs, NSA civilian/military affiliate names, NSA phone numbers, etc. (This is not an all-inclusive list.)”

Other documents focused more on visual aesthetics of devices and architecture, for example the parallel between the circular composition of the war room in Kubrick’s Dr. Strangelove and the GCHQ ‘doughnut‘ building.

Where do these images and texts from Cold War fictions come from? And where do you find the current secret ones?

The images and texts from Cold War fiction come from watching many hours of (usually very bad) Cold War film and television and manually curating extracts that relate to previously revised contemporary secret documents. Most of the extracts come from the early 007 films (Dr. No, You Only Live Twice, Moonraker), the Mission: Impossible 1960s television series, Macgyver as well as other fiction films of the era such as The Conversation and Dr. Strangelove.

I initially intended to work with the original files leaked by Edward Snowden and Chelsea Manning but even after they have been covered in the news it is very hard to find the primary sources for them. The current secret documents I used come from different places, mainly non-government organizations and news agencies. Many came from the Electronic Frontier Foundation and their repository of NSA primary sources (https://www.eff.org/nsa-spying/nsadocs). Some others came from The Guardian and their similar list of U.S. embassy cables summaries (now taken down but formerly http://www.theguardian.com/world/series/us-embassy-cables-the-documents) and The Intercept (https://firstlook.org/theintercept/documents/). Other documents were found throughout the web from all sorts of sources and forums with varying degrees of credibility. 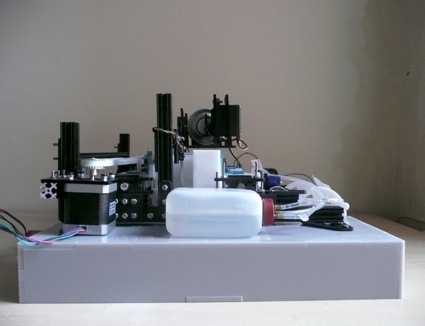 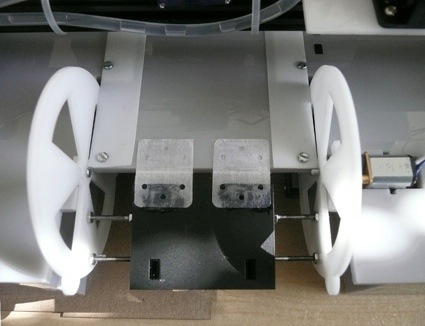 Why did you decide to work with Cold War fictions documents instead of actual CW documents?

I did for a while focus on Cold War declassified documents, for example I did some reading around the STASI archive and even some pre-Cold war sources such as the recently disclosed Manhattan District History (https://www.osti.gov/opennet/manhattan_district.jsp). However most of these documents did not seem as relevant as some of the things discussed in fiction. I think that in the Cold War way of thinking an omniscient machine capable of spying on everyone seemed like a holy grail. This comes across in discussions of satellite imagery and long distance radio networks in many films and television series.

I also find it interesting to think that the rhetoric in these fictions could have done some of the ideological groundwork that led to mass online surveillance. It seems that in many of these franchises (007, Mission: Impossible, Macgyver, etc.) it’s fine for the government to spy, impersonate and assassinate local and foreign citizens if they have reason to believe that they are suspicious. The ‘good guys’ in these series overthrow governments, kill criminals without trial and have no regards for international agreements and human rights, but they do it all for the sake of national security so it becomes justifiable. This is where I see a real link between the fiction and a reality in which citizens are prepared to accept that unregulated surveillance is good because it will stop ‘the bad guys’.

Do you see relationship with the 300 Years Time Bomb? because news and secrets are explosive in their own way too..

I see a link in the popular culture that both of these projects take from, I would say that action cinema was very relevant to my generation and that this ends up showing in my work. I also see a relationship in the way I explored the way we assign value to things based on their lifespan. The 300 Year Time Bomb gained historical value by existing 300 years whereas a self destructing document gains value by existing for a very short amount of time, meaning that only a privileged person will be able to read it.

I hadn’t actively thought of the secret as explosive but I think it is implicit when I say that “The release of the NSA files will likely be part of this decade’s history”. I think that Snowden’s leaked documents have caused a sort of explosion resulting in an accelerated process of questioning the ethics around online technologies, digital democracies and personal rights online.