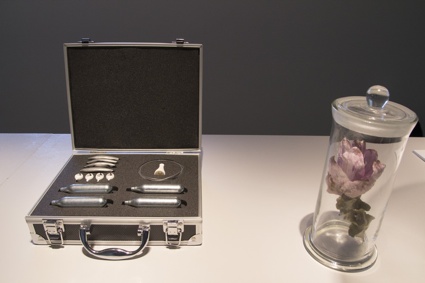 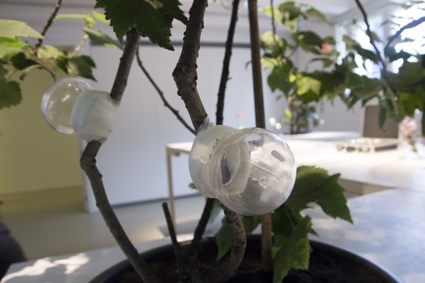 Here’s one last post about a work i discovered at BIO50, the 24th Biennial of Design that closed in Ljubljana a few days ago (at the bottom of this post, you’ll find links to stories i wrote about some of the projects developed for the biennial.)

One of the eleven themes explored at BIO50 brought design into the realm of life sciences. I was thus expecting one of those futuristic, speculative and over-serious projects that explore scenarios of a life mediated by biotechnology. However, what designers Dimitris Stamatis, Pei-Ying Lin, Jasmina Weiss, and Špela Petrič came up with didn’t meet my expectations at all. And that’s always a good thing.

Their Plant Sex Consultancy is exactly what its title suggests: a series of design interventions aimed at ‘augmenting’ the sex life of plants, through long discussions with ‘plant clients.’ 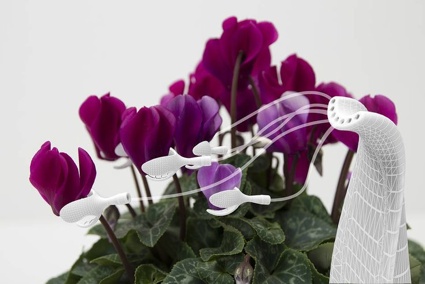 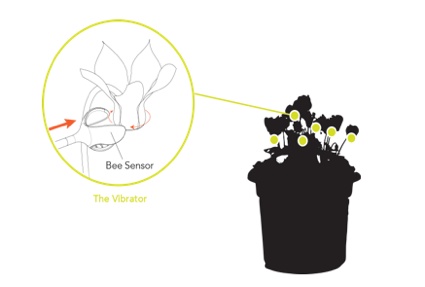 By applying human-centered design methodologies onto plant life, PSX ends up serving its own agenda, creating objects that are familiar to the human and that bear a meaning to the human only. Not the plant.

Besides, the legitimacy of intentional anthropomorphism depends on the viewer’s cultural context. The method is effective if the designer employing it subscribes to the Eastern philosophy, which grants an equivalent status to all entities, living and inanimate, but irrationally unpalatable to designers stemming from the Western Cartesian tradition, which ascribes true individuality and sentience solely to human beings. The inherent antagonism, absurdity and humor apparent in the augmentations also manifest themselves in the design process, which stems from West, but is in this context more congruent with the Eastern world view. 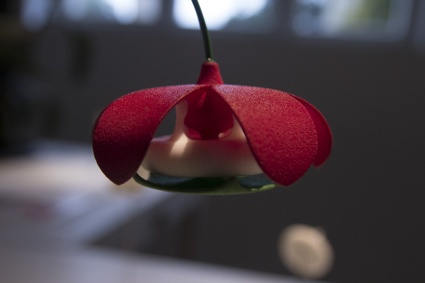 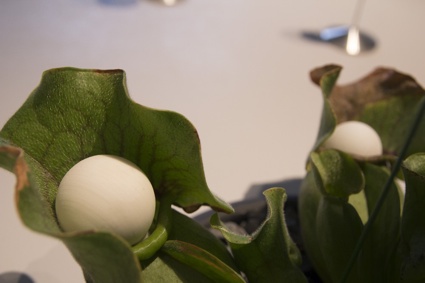 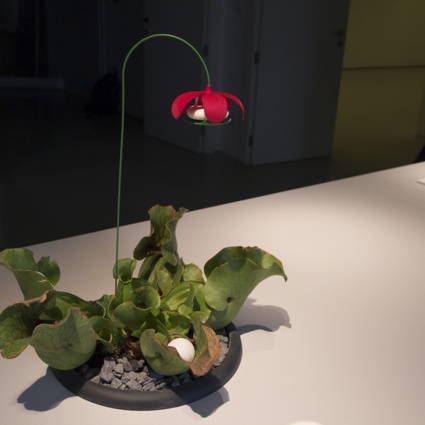 Pei-Ying Lin and Špela Petrič were kind enough to answer my absurd questions about their not-so-absurd project:

What made you want to design artifact for the sexuality of plants?

Within the framework of this year’s BIO50, intended to test the limits of incidental interdisciplinary collaboration while taking a critical stance towards contemporary design practices, we (Dimitris Stamatis, Pei-Ying Lin, Jasmina Weiss, and Špela Petrič) wanted to push the envelope by proposing a project that wilfully transgresses common sense, good taste, and the purpose of design as a branch of applied art with utility at its core.

For all empathic and philosophical purposes, plants are the incomprehensible aliens living amongst us, which we experience daily but perceive through their ubiquity, their slow pace, immobility, at best as a source of food and their potential applicability to reduce our detrimental environmental impact. We see, taste, smell and touch the otherness of plants, but spend very little time daydreaming to comprehend it. And even if we did, we’d hardly find a point of identification, of justifiable commonality between humans and plants that would spark a comparison, which would release plant agencies from the murky bottom of the anthropocentric valorization of living beings.

Then, there is sex. In the abstract realm of biological sciences, which seeks commonality in processes across the living world, sexual reproduction stands out as a staple principle of natural selection. Using a gastronomy facsimile, sex results in genetic cocktails of individuals. It is one of the crucial steps in the recipes of species under pressure to suit the changing taste of the environment. This applies to all organisms, from bacteria to humans and, of course, plants.

We recognized the uncanniness of likening plant and human sexual reproduction as an agora to juxtapose conceptions of “unique” human cultural practices to cross-species biological necessities, and the design process, promoted (by BIO50 amongst others) as a widely applicable approach, to the limits of its meaningfulness. 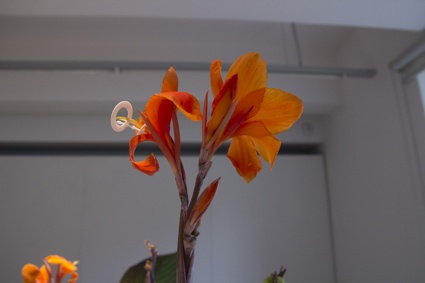 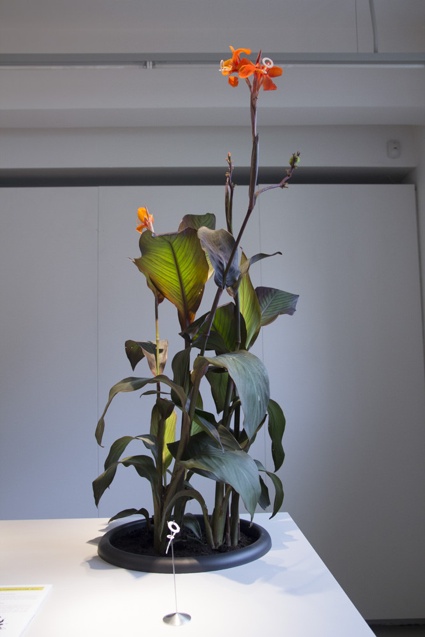 Prosthetics to enhance the ‘natural reproductive strategies’ of plants! Even the term ‘consultancy’ sounds ironic because it implies having an actual face to face conversation with a plant. The whole project actually doesn’t sound very serious, more like a parody of design project. However, while i was listening to your presentation of the project in Ljubljana, i was surprised by how much ‘sense’ these little sex toys and gadgets might have. They are a bit ridiculous but they also respond to a perceived need or shortcoming of the plant reproduction system (for example: a bee going extinct.) So how do balance the credible and the fanciful? How seriously should we take the project and the various problems these plants have when it comes to reproduction?

The PSX Consultancy presents a hybrid manifestation of tongue-in-cheek discourse stemming from established concepts; it is conceived using artistic and design approaches in response to a body of knowledge provided by science. The identified reproductive problems of plants and the proposed solutions are as serious as they can be, but are coined using a methodological twist during the process.

The PSX’s research of reproductive problems of the plants is based on scientific papers, meticulously interpreted by the team, two members of which have a scientific background, one of them a biologist with a PhD. We applied the scientific reference overview towards the construction of a “profile” for each plant, which included their adaptation to indigenous habitats and the issues they face during their ongoing evolution and introduction to non-native bioregions, all from the perspective of plant reproduction. We then synthesized the background knowledge gathered around each “client” in the design process and by doing so considered the factual biological elements in a cultural way. Solving the interactions of elements (criteria or issues) led the PSX Consultancy to an original but miniscule fraction of all possible answers to the reported problems of particular plants. Freed from design’s usual imperative of utility, we found ourselves facing an abyss of options. To collect a wide spectrum from meaningful to meaningless augmentations, we purposefully decided on a very flexible criterion for acceptability – the proposals had to poses bio-logic and preferably allude to human sexual practices. 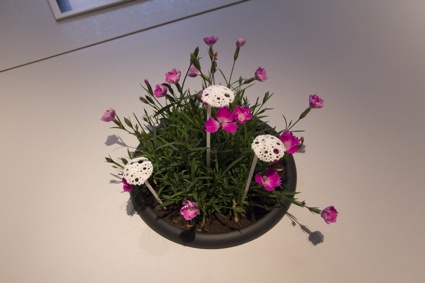 In the context of BIO50’s challenge to designers, artists, architects, and scientists to collaboratively undertake “Designing Life“, the credible and the fanciful continue to wade in the “punny” cesspool delineated by the curators of the biennial. The plant sex toys’ uncertain and obscured position in relation to fact and fiction hopefully stimulates the viewer’s critical perspective on the design process at hand, which can be applied to many similar endeavors undertaken and advertised as truthfully applicable. It seems that the message was successfully transmitted, winning the project an honorary mention at the biennial. 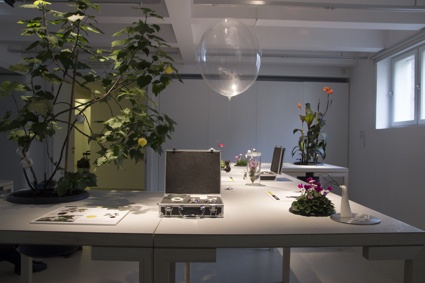 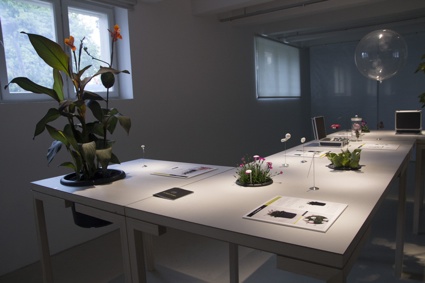 Once you outfitted the plants with these little devices, did you observe how they reacted? What happened? Did the plant accept the devices, were they useful to the reproduction and well-being of the plants?

Keeping in mind the project is currently in its conceptual phase and that the prototypes produced thus far were plastic, non-functioning proposals, the augmentations were innocuous to the plants. If we were to progress to technology-enabled functioning gadgets, we are confident the sex toys would have surprising (favorable or detrimental) effects, which are impossible to predict without actually trying them out.

How did you select the plants you worked for?

After the initial sweep of candidates based on personal preference, oddity/familiarity, scientific interest, and general popularity, we had to pragmatically narrow our selection based on plant availability in Slovenia and the timely expression of their reproductive organs during the biennial from September till December. Further, we focused on plants with unique reproduction issues, which resulted in most of the clients being species originating from the tropics and making do in temporal climates, often due to human intervention. Humans indirectly caused many of the problems the PSX consultancy is attempting to fix.

What is next? Are you planning to push the project any further?

Since in the context of an exhibition, the legibility of individual augmentations depends on the presence, traditional use and symbolism of a particular plant species in the specific cultural environment, we hope to expand the collection by conceiving augmentations for different locally important plants, reaching a wider audience. In the process we also realized the project somehow mirrors the differences between the Western (European) / Eastern (North East Asian) mentalities, making it an interesting point of conflict and resolution to culturally dependent artistic practices.

Thanks Spela and Pei-Ying!

Also part of BIO50: Friction Atlas, Cogito. Exploring the cosmos by means of radio waves, Engine Block. Or how to turn a moped into a boat or a concrete mixer.