A few weeks ago i was in Brussels for The Digital Now, the first thematic exhibition of a series produced by Cimatics, that explores relevant artifacts within the current artistic context and media art related discourse. 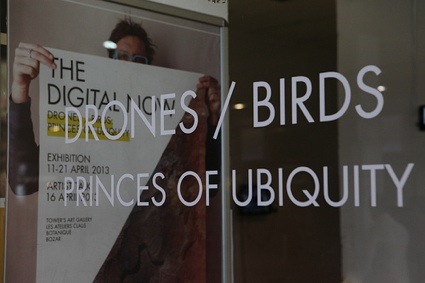 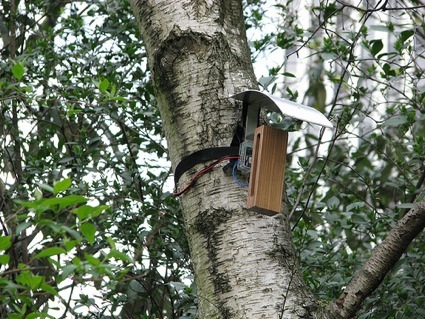 The first chapter in this series, ‘Drones / Birds: Princes of Ubiquity’, looks into autonomous technology through the lens of birds as objects reflecting our contemporary relation with technology.

The bird has long been seen as a symbol of freedom, communication, transborder mobility but also as an indicator of environmental change. However, much of the bird physical and spiritual significance has been lost on the way to and from the industrial revolution. But according to Bram Crevits, curator of ‘Drones / Birds: Princes of Ubiquity’, digital culture has brought birds back to the fore. Or maybe it’s the birds which have forced their way into our techno-mediated world. Think Twitter of course. And birds incorporating ringtones into their repertoire so effortlessly that Richard Schneider of the NABU bird conservation centre in Germany suggested that, in the interests of ecology, mobile phone users convert their tones to pop songs which are too complex to be mimicked by the birds. Woodpeckers attacking CCTV cameras. Or confused birds trapped into the twin columns of light shot into the sky each year on September 11 in New York. The bright memorial short circuits some of the cues that birds use when they are migrating at night. And then there’s drone watching as the new bird watching. And drones counting birds.

The relevance of drones -or Unmanned Arial Vehicles- in relation to birds is more than purely formal or anecdotal. Another source of inspiration for the exhibition is indeed the New Aesthetic and the focus on the ways we experience our digital condition: always on, always there. Drones have been related to this New Aesthetic debate ever since it started. 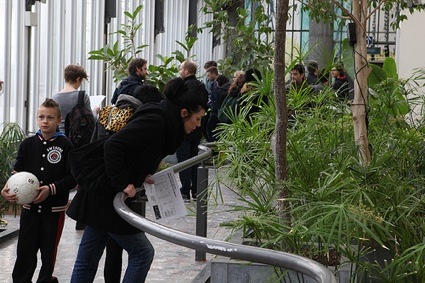 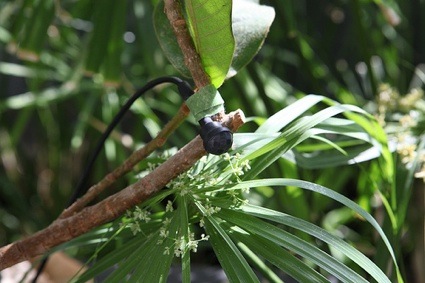 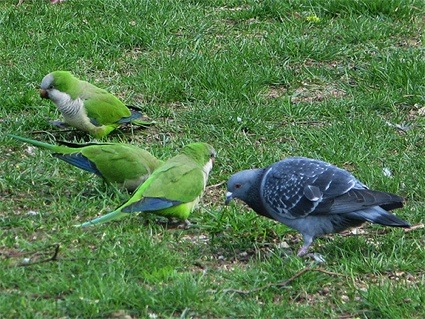 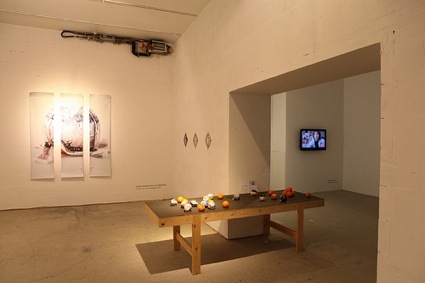 Part of the exhibition was located at the Botanique. Christoph De Boeck & Patricia Portela installed invisible birds inside the greenhouse. Sensors measure the dynamics of wind and light harvested by the plants during their photosynthetic process, and translates it into bird sounds. When there is human movement in the garden a financial algorithm (similar to the ones used in a speculation economic market) interprets the variation of the received data and transforms and remaps the natural garden soundscape to which plants seem most profitable in that split second.

However, most of the works were in a gallery hidden inside a tunnel. It took me ages and a couple of panicked phone calls to find it. The show was pretty exciting though because instead of showing only artworks and building up the usual art&tech discourse around it, the curator chose to insert the works into a broader context that included the political and the downright popular.

For example, two videos demonstrated the impact that unmanned aerial vehicles have on every day life in Pakistan.

On the one hand, a video shot by Noor Behram outside his house in North Waziristan, the footage shows a reaper drone flying over Waziristan. For more than five years, Behram has been documenting drone attacks in Pakistan’s tribal areas, the hub of the CIA’s remote assassination program.

Trevor Paglen interviewed Behram a while ago: “[The few places where I have been able to reach right after the attack were a terrible sight” he explains, “One such place was filled with human body parts lying around and a strong smell of burnt human flesh. Poverty and the meagre living standards of inhabitants is another common thing at the attack sites.” Behram’s photographs are miles away from official American reports that deny civilian casualties from drone attacks: “I have come across some horrendous visions where human body parts would be scattered around without distinction, those of children, women, and elderly.”

Pop song Za Kaom Pa Stargo Stargo Drone Hamla” (My gaze is as fatal as a drone attack) shows the other hand of the spectrum, where the increasing appearance of unmanned vehicles over the skies of Pakistan (see data viz Drone war: every attack in Pakistan visualised for more details) inspires little more than the lyrics of a song:

‘Drones / Birds: Princes of Ubiquity’ was thus full of contrasts. One moment, you were reflecting on surveillance technologies, next you were laughing (the suitors of the frantic singer are peerless.)

I’m now going to revert to my usual “throw as many images and projects in their face” mode and leave you with a few works i’ve (re) discovered in the show: 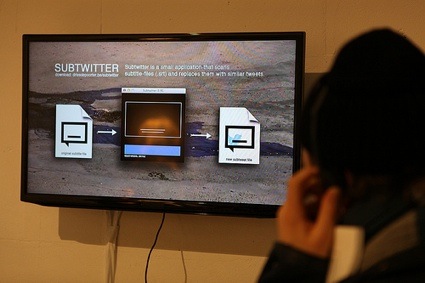 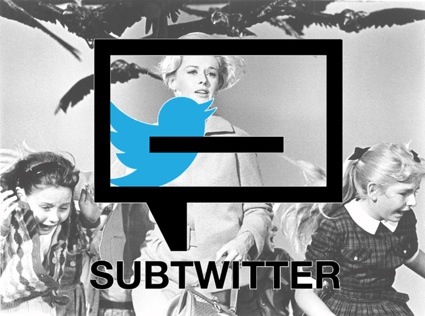 Subtwitter is a free application that scans subtitle-files (.srt) of a film and replaces them with similar tweets. The application uses the original subtitle-file of a movie or series of your choice, then looks into each separate sentence of the subtitle and crawls the twittyverse for a similar tweets. The result are –sometimes absurd and sometimes witty- subtitles that consist of computationally associated tweets. 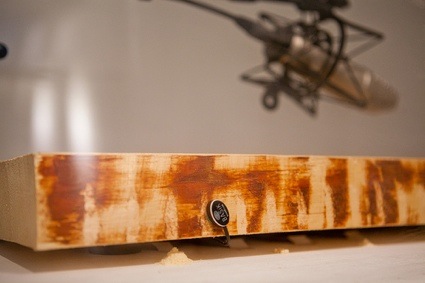 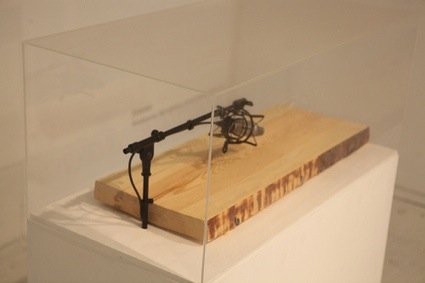 A microphone picks up and amplifies the sound of woodworms eating their way through a piece of wood. Temperature, humidity and other environmental qualities determine how the wood worms dig their tunnels and ‘play’ the piece of wood. 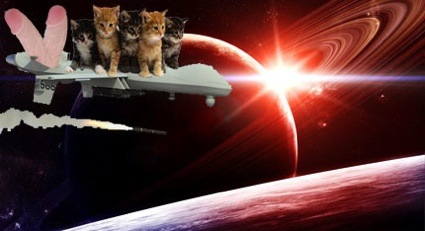 The Pussy Drones gifs trigger a new form of discourse between the web­based experience (lolzcat, memes, gifs) and historically closed systems of the patriarchal structures which control the physical world. That is to suggest drones are merely ‘unmaned’ cocks controlled by (finding) pussy.

In theory the democratic nature of the internet should allow everyone to create equally, controlling its code at an open root p2p level. Yet the internet­ net art, the very essence of the web (programming, the code structure itself) is still ruled by men and corporations who control and own it in its entirety. We are not Facebook’s customers, we are their product. The web has never been a democratic medium, Mark Zuckerberg said ‘There are probably 200 million people who think that Facebook is the internet.’ It is easy to include the digital life is not any different than our life away from the keyboard. 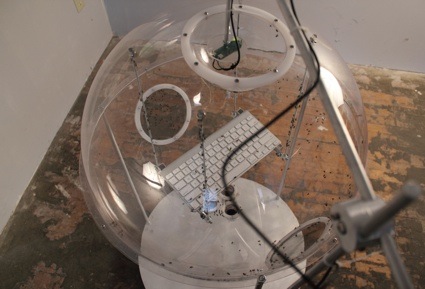 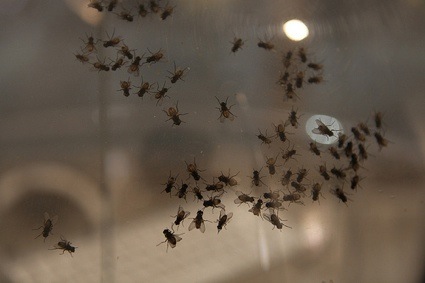 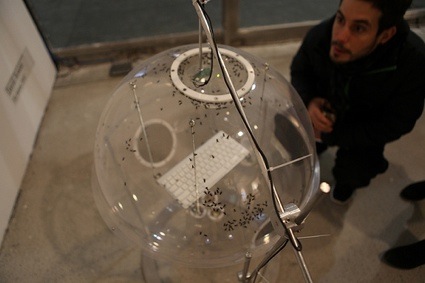 David Bowen‘s now famous Fly Tweet sends Twitter messages based on the activities of houseflies living inside an acrylic sphere along with a computer keyboard. As a particular key is triggered by the flies, the corresponding character is entered into a Twitter text box. A message is tweeted as soon as 140 characters are reached or when a fly triggers the “enter” key. 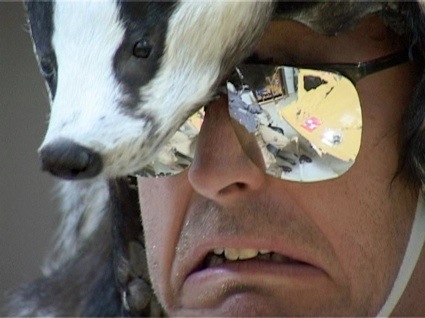 Marcus Coates uses shamanic rituals and his knowledge of the animal world to try and solve problems faced by local (human) communities. In 2009, he visited the mayor of Holon in Israel who asked him how he should handle the problem of the violent youth in the city. Coates first consulted with the animals that he had encountered, and in particular the plover, a bird known for luring predators away from its young by pretending to be injured so as to appear as an easy target for predators. His reading of the meeting with the plover was then explained to the Mayor. According to Coates, The important thing for [Israel] as a nation is, through education, to emphasize shifting identities and an empathy with a different position. It’s a fundamental position of resolution within a conflict, to be able to emphasise with your enemy or oppressor.

His solution to Holon’s social ills is to teach empathy and recognise that victim status is often used as justification for violent behaviour.

Hi answer left the Mayor very impressed as you can see at the end of the video i’ve pasted below:

Erica Scourti‘s video were among my favourite. Taking her cue from stock video sites corresponding to the key words ‘woman’, ‘nature’ and ‘alone’, the young artist filmed herself performing each action described in the title. The video and title was then uploaded to YouTube, forming a collection of ‘rushes’ which were used to create the final single channel version. After that, videos started to get a life of their own, with artists and film makers using Scourti’s films as another stock library and including then in their own videos. 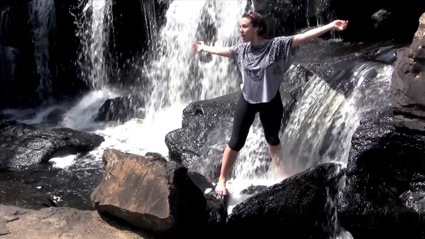 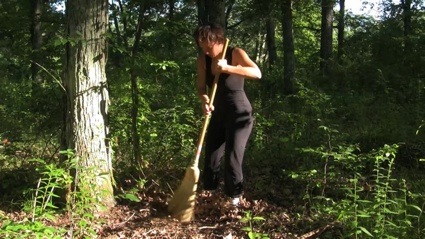 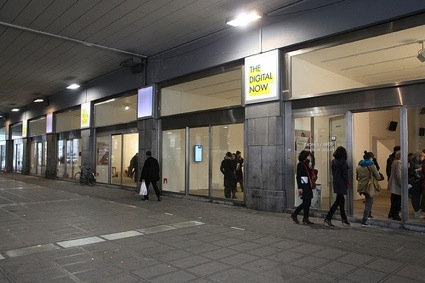 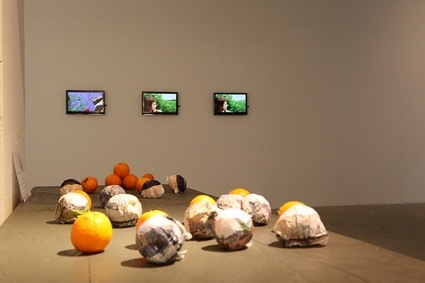 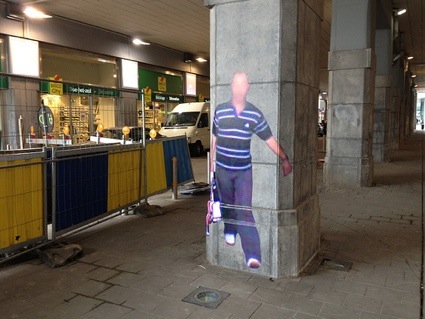 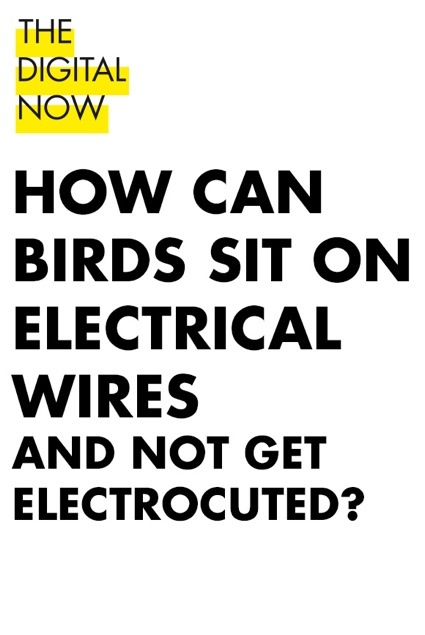 The Digital Now is produced by Cimatics, a Brussels-based arts organisation which activities includes the production support of audiovisual and digital creations as well as live events, exhibitions, workshops and guest-curations.

All images courtesy Cimatics. Except the ones illustrating the work of Erica Scourti and Marcus Coates,
Image on the homepage: Zimoun, Woodworms, 2009-2012. Photography by Zimoun ©