The Deadly Life of Logistics. Mapping Violence in Global Trade, by Deborah Cowen, an Associate Professor in the Department of Geography at the University of Toronto. Her work focuses on the politics of space and questions of citizenship. 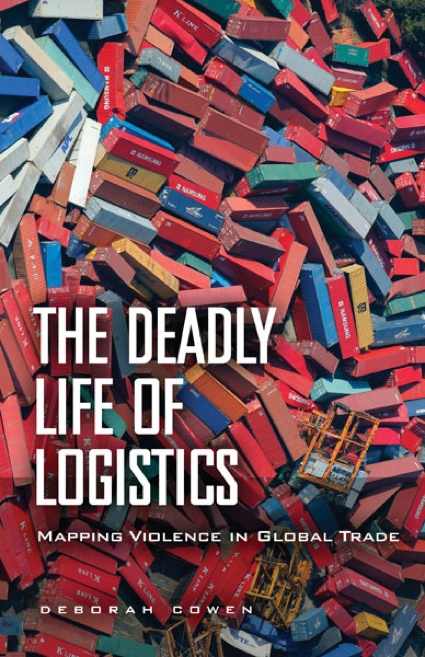 Publisher University of Minnesota Press writes: A genealogy of logistics, tracing the link between markets and militaries, territory and government

Deborah Cowen traces the art and science of logistics over the past sixty years, from the battlefield to the boardroom and back again. Though the object of corporate and governmental logistical efforts is commodity supply, she demonstrates that they are deeply political–and, considered in the context of the long history of logistics, deeply indebted to the practice of war. 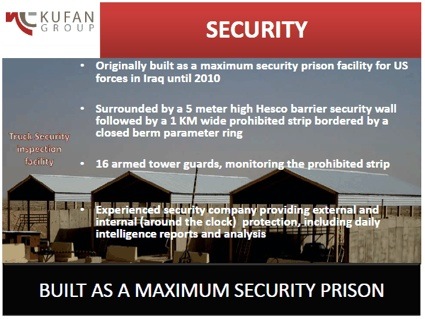 Details of the new Basra Logistics City, on the site of the old Camp Bucca (image)

The image above encapsulates rather efficiently the intimate connections that link the military and the private businesses which transport ‘seamlessly’ all kinds of goods around the world. Basra Logistics City used to be called Camp Bucca and it used to be the largest U.S. military detention facility in occupied Iraq. In December 2010, the US handed the base to the government of Iraq, which, on the same day, gave Kufan Group of Iraq a license to turn the place into a 21st-century logistics hub for Iraq’s port.

The Deadly Life of Logistics demonstrates how logistics is at the very heart of war and trade. Since WWII, businesses have been learning lessons from the infrastructures, strategies and technologies that armies have put in place to ensure that soldiers are fed and ammunition is available at the front. Logistics plays a key role in war. The greatest volume of material shipped from the UK to France during WW1, i read in the book, was oats and hay for the horses. Over time, private companies have not only learnt from the military, using logistics to reshape the geographies of capitalist production and distribution on global scale, they have also quickly started to support war efforts and are now providing housing and feeding to the soldiers stationed in Afghanistan. The author speaks of a militarization of the economy and a privatization of warfare.

The book offers a fascinating tour of the instruments and tactics of logistics: the palet, the container, the deregulation of the transport industry in the U.S. in the 1980s, the use of ‘flags of convenience’, etc. All of which provide huge benefits in time, space and capital. DHL delivers your parcel on time, new toys arrive in store before Christmas and everybody is happy. Except the workers who saw their wages, rights and the strength of their unions reduced. Their very safety is at risk as well. Port, transport and logistics are consistently ranked among the most dangerous industries by governments that monitor health and safety on the workplace.

The picture that the book offers is rather bleak. In the world of logistics, China imports its cheap labor model, the port of Dubai where the vast majority of the private workforce have no formal citizenship is heralded as a model for the U.S. port security, Somali pirates are presented as enemies of humanity while foreign companies illegally dump toxic substances in Somali waters and others deplete them of marine resources in total impunity, the flow of capital and commodities is a matter of species survival and human rights are a rather tiresome hindrance. 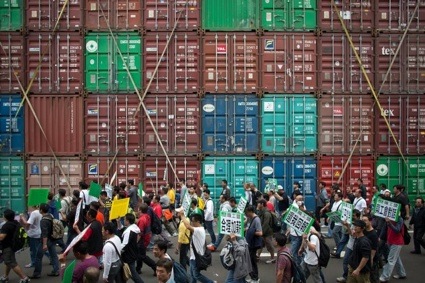 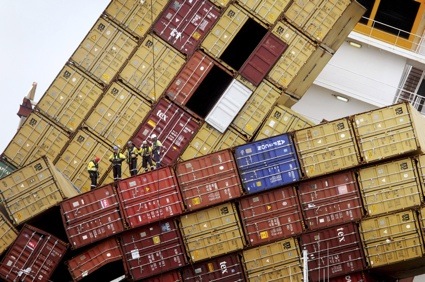 A sea crane is removing the 1280 containers that remain on board the ship.AP Photo/New Zealand Maritime, Graeme Brown, HO (image via Gizmodo) 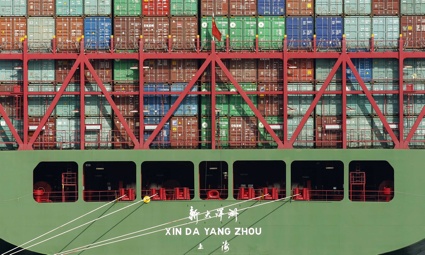 The trade surplus China has built up over the past two decades is only likely to increase further. Photo: Lucy Nicholson/Reuters

The Deadly Life of Logistics is a fascinating, informative and politically engaged book. I sometimes found that the constant abbreviations, quotes, references and repetitions got in the way of a fluid reading but otherwise it’s a book i’d like to place in the hand of artists and activists. Of artists mostly because no one better than them can translate the impact and dangers of contemporary logistics into an arresting language understood by the broad public.