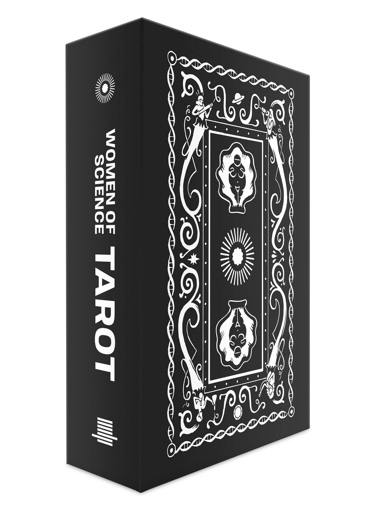 The MIT Press summary: The Women of Science Tarot Deck is a card game that helps us tell stories about our future based on principles of science. Each major arcana card features a fundamental scientific concept like extinction, diversity or gravity. The 56 minor arcana cards feature inspirational women who have changed the course of STEM. The lively illustrations are by neuroscientist and comic artist Matteo Farinella. For readers new to tarot or those who want to learn more about women in STEM, accompanying the deck is a guidebook with biographies of all the women featured on the cards as well as information about the major arcana cards.

I wasn’t expecting the MIT Press to release a deck of cards that mixes divination and astrophysics, feminism and cartomancy, chemistry and the occult. The esoteric element, I suspect, is mostly a pretext to get us to discover great scientific minds that happen to be female and often unjustly forgotten. 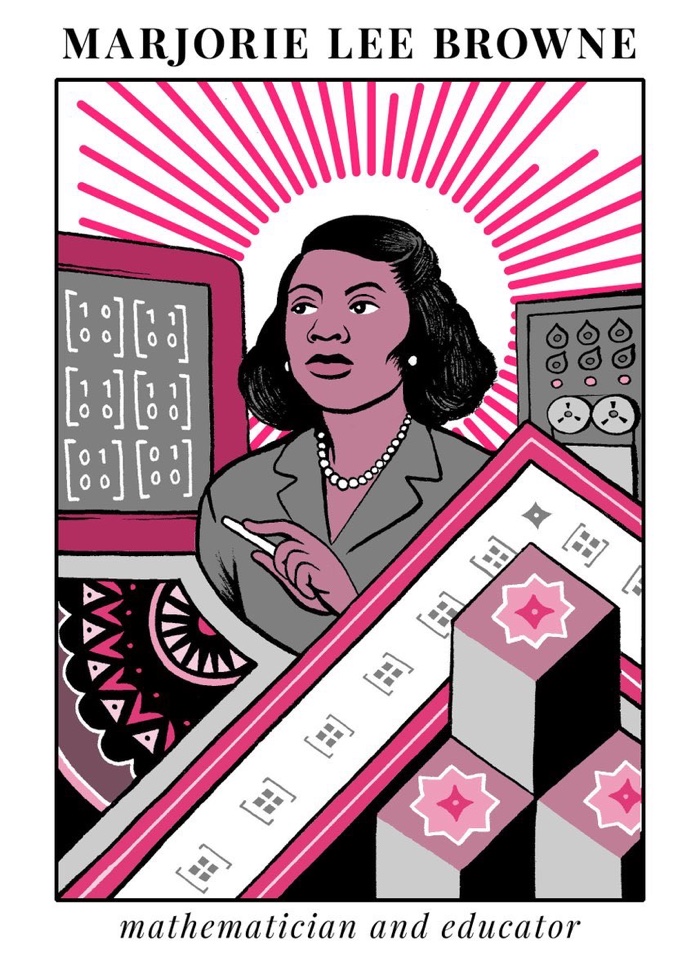 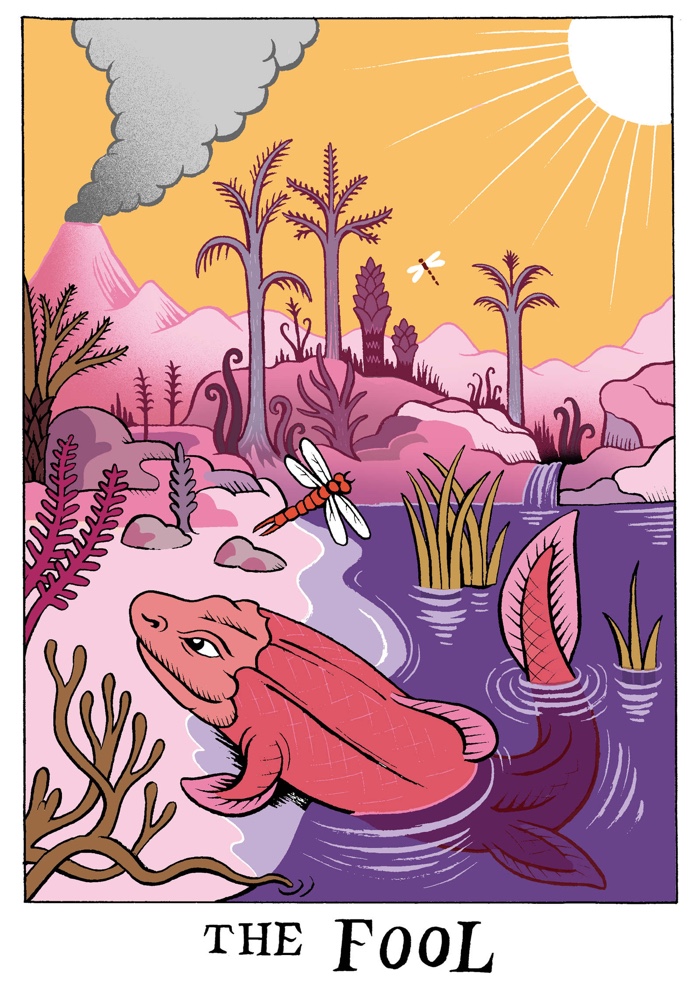 The deck contains the 22 Major Arcana (or trump cards) with The Fool, The Magician, The Devil, The Tower, The High Priestess and other well-known figures and elements. This time, however, they have been given a scientific coat. The Emperor evokes the atomic bomb, The Strength is set in the heyday of the Industrial Revolution, The Wheel of Fortune has been upgraded to the Large Hadron Collider, The Judgement is one of the key characters of Fritz Lang’s Metropolis, etc.

The cards of the Minor Arcana feature 56 female scientists. The cards are divided into four categories or suits: Nano for the invisible fields like math and physics; Micro for the molecular fields of chemistry and microbiology; Macro stands for the systemic fields of ecology and geology; Astro for the cosmic field of astronomy. Marie Curie, Rachel Carson and Ada Lovelace are there of course. But also Tapputi-Belatekallim who lived in Mesopotamia around 1200 BCE and was the first recorded chemist. There’s also geochemist Katsuko Saruhashi whose research and advocacy led to the ban on nuclear weapon testing; Alice Augusta Ball, a young chemist who developed the first effective treatment for leprosy; Sister Miriam Stimson, a Catholic nun and chemist who laid the groundwork for the discovery of the structure of DNA; Wang Zhenyi, an 18th-century self-educated astronomer who explained how science, not divine interventions, explained lunar eclipses; Bertha Parker the first indigenous North American archaeologist who, without formal training, made important contributions to our understanding of early North American civilisations. 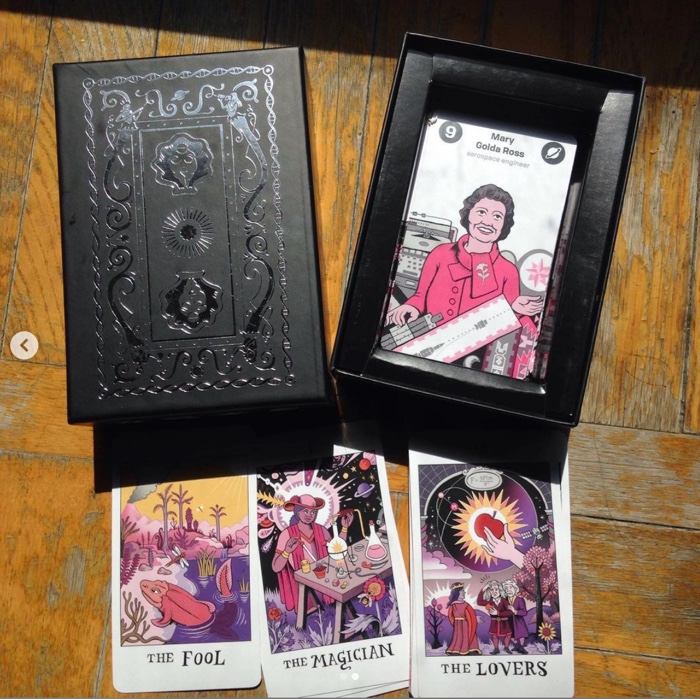 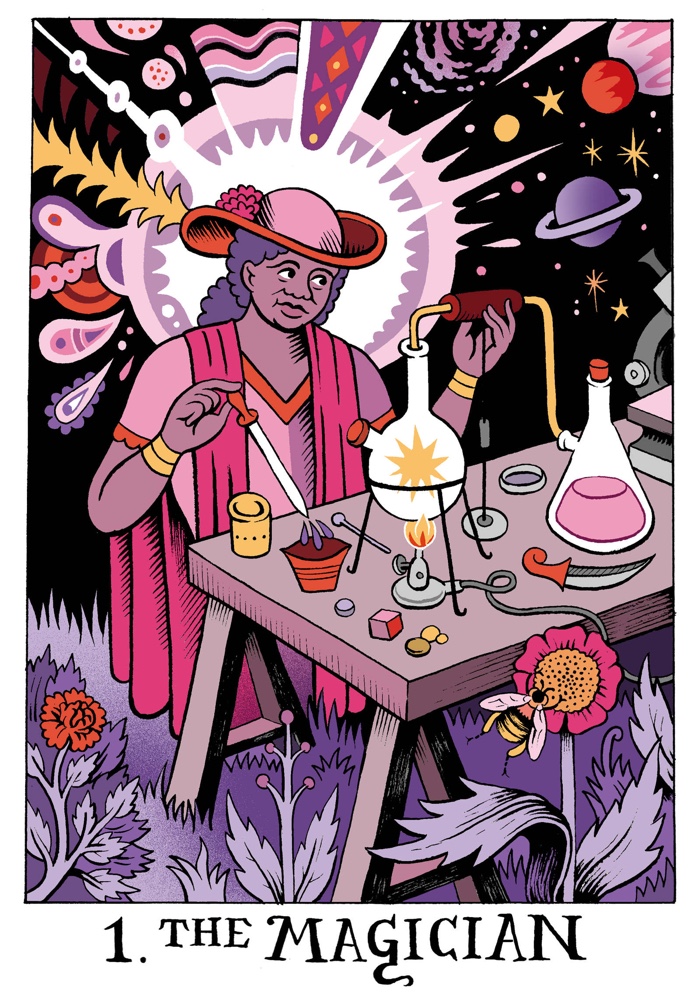 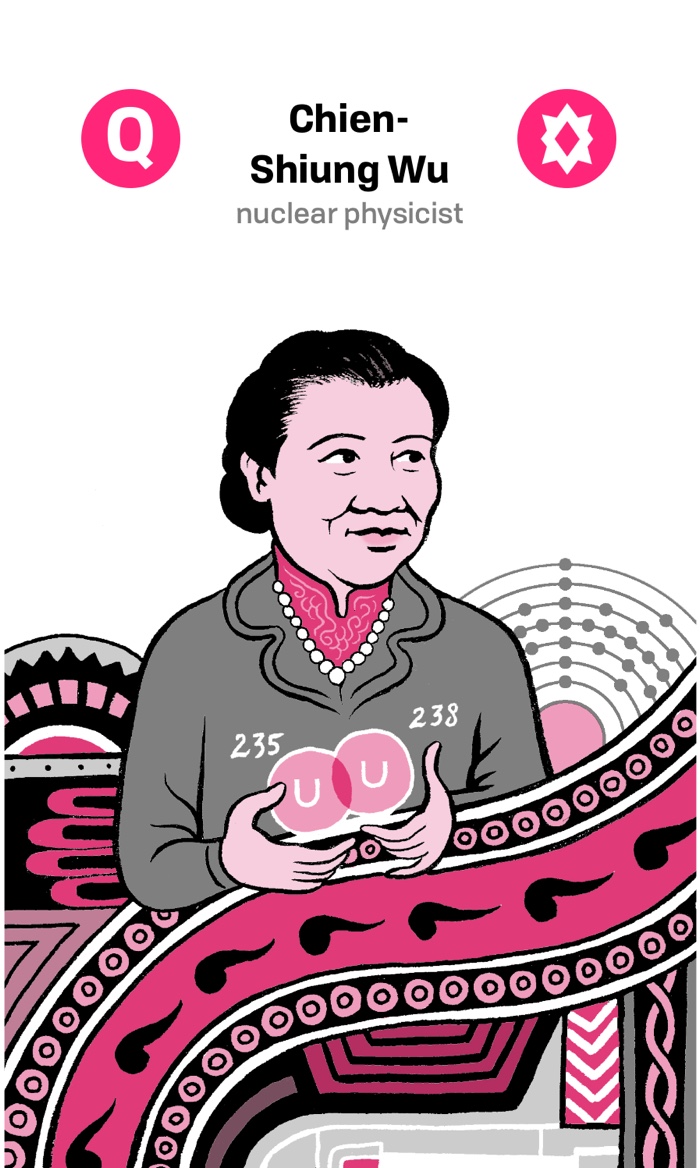 And because I knew nothing about tarot before opening this one, the information above comes straight from the accompanying guidebook. It contains instructions for playing and for the readings, the meanings of each card as well as the short bios of 56 scientists.

The illustrations are a joy. I love the way Matteo Farinella (who is not only a comic artist but also a neuroscientist) uses pink in a way that screams “bold and audacious”, not “coquettish and sappy”.

I can’t promise that the Women of Science Tarot will be an efficient fortune-telling tool but I do believe that it will make for a smart and charming present for pretty much everyone. Except for the sexist pig in your life. We all have one of those and he doesn’t deserve a present. 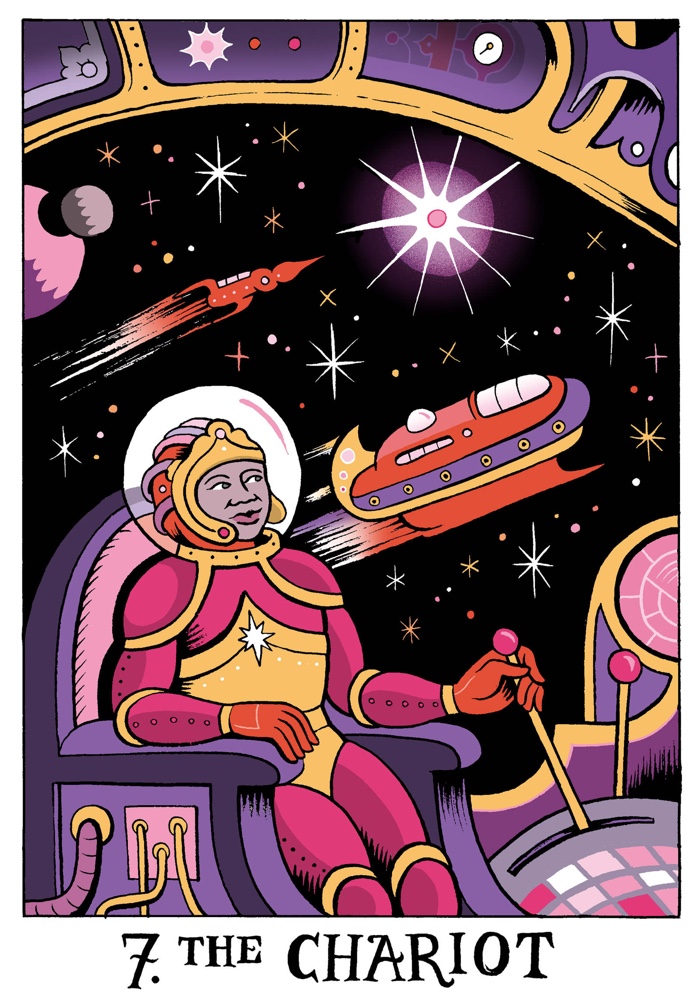 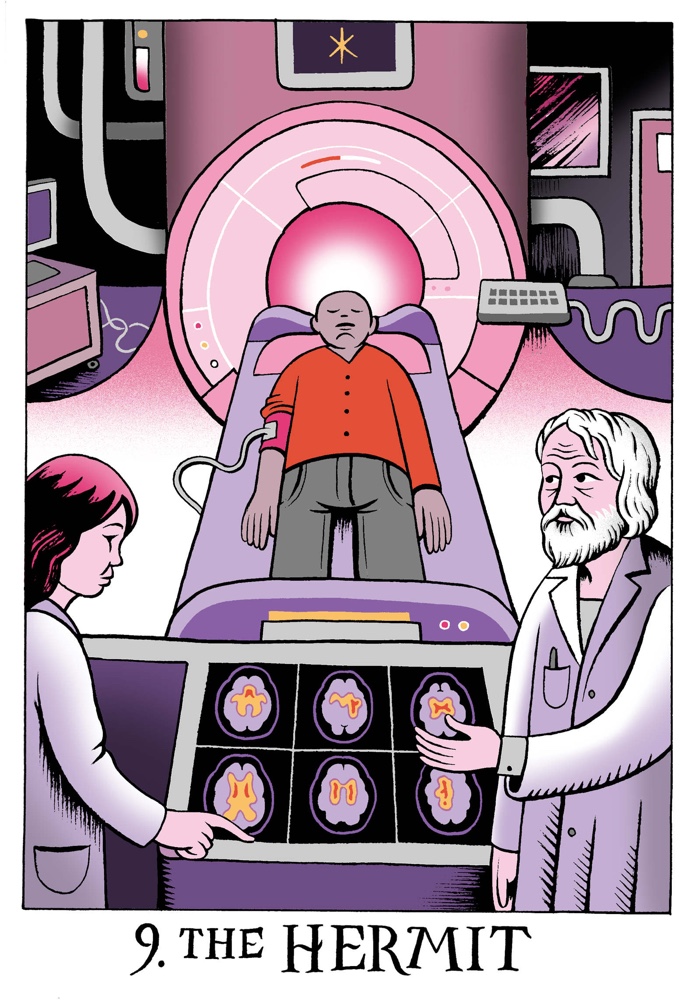 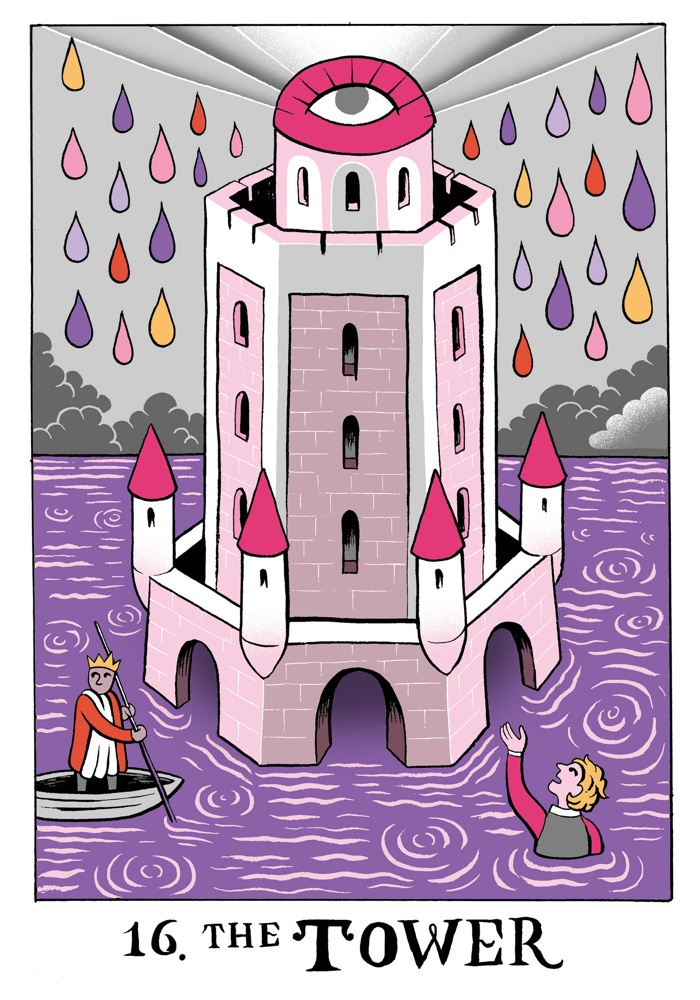 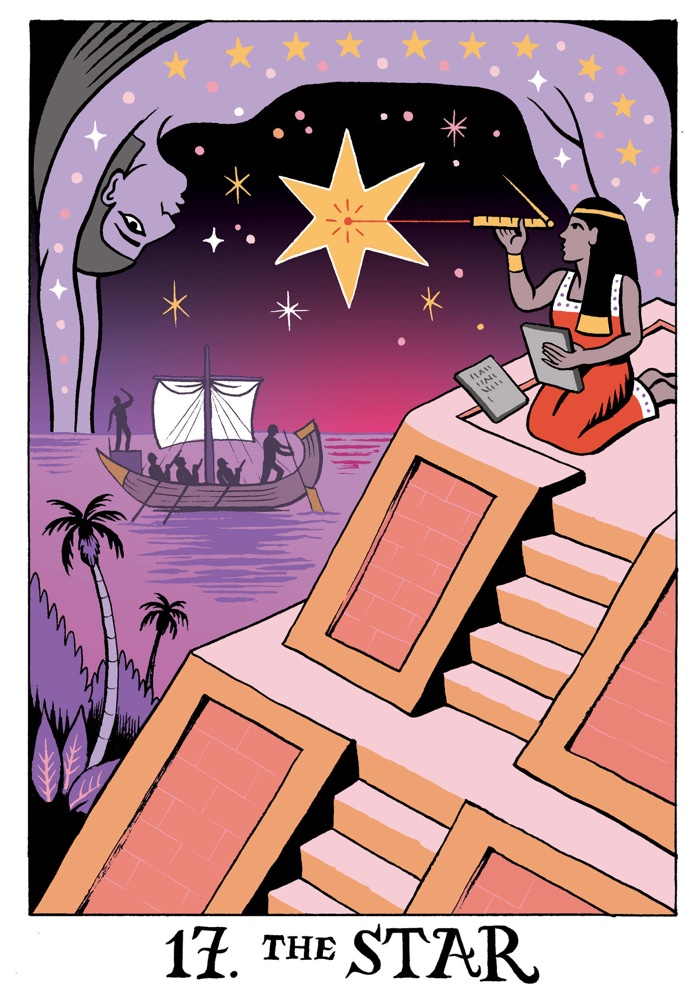